As a group of young men anxiously wait for their turn to battle, reciting their rhymes over and over in their heads, the last person they'd probably expect to see joining them is Joy France, Manchester’s very own 'Rapping Granny'. 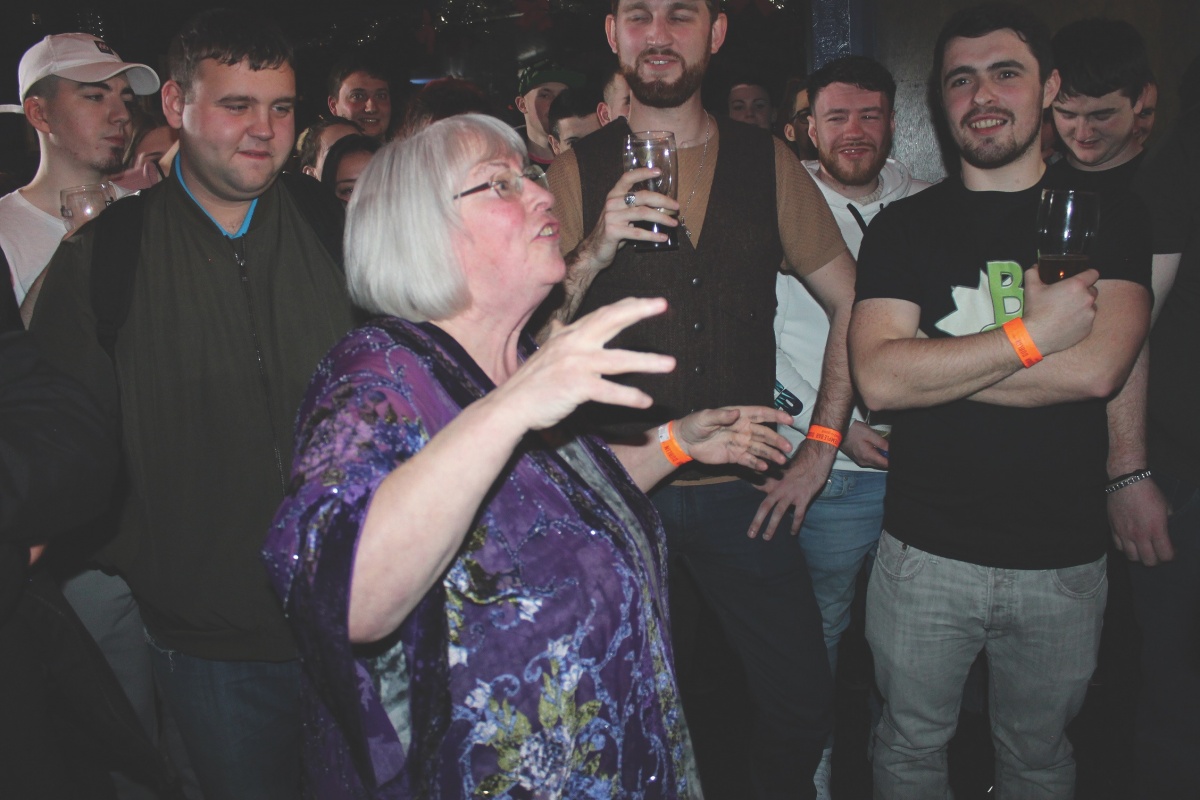 As someone who has always struggled throughout her life with confidence, Joy’s story from teacher to poet to battle rapper is as interesting as it is unbelievable. A story that takes everything you thought you knew about growing old and accepting your lot in life and throws it right out of the window.

As with most stories (the best ones anyway), it’s probably best to start at present, work our way backward, head forward a bit and then end right back up where we started. What works so well for Quentin Tarantino is going to help us out considerably here too. 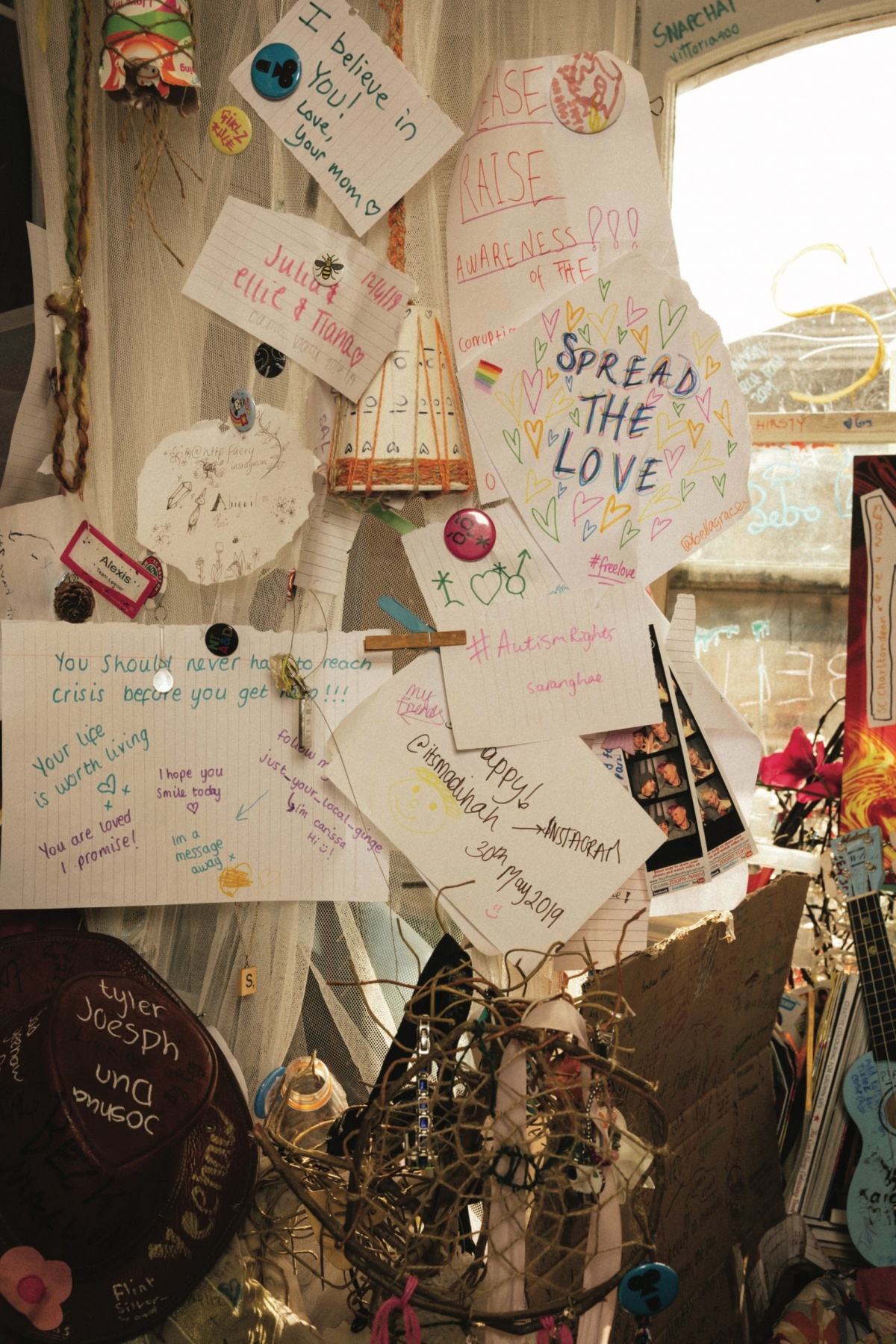 I sat down with Joy in her very own creative space in Afflecks on a crisp August morning, and as I sat down, surrounded by an unfathomable number of hand written messages, drawings, trinkets and stories, she told me just how she managed to get where she is today and how she came to be known as Manchester’s very own ‘Rapping Granny’.

The creative space itself is well worthy of a mention, and is intrinsic to the whole of Joy’s story. Set up in Afflecks, in the quietest corner of the quietest floor, the room is a free, non-funded creative space that anybody can use – for whatever purpose they desire.

Since opening up the space 4 years ago, Joy has welcomed thousands of people, all with their own stories of heartbreak, stress, happiness and dreams – and they’ve all gone in to create something truly unique. 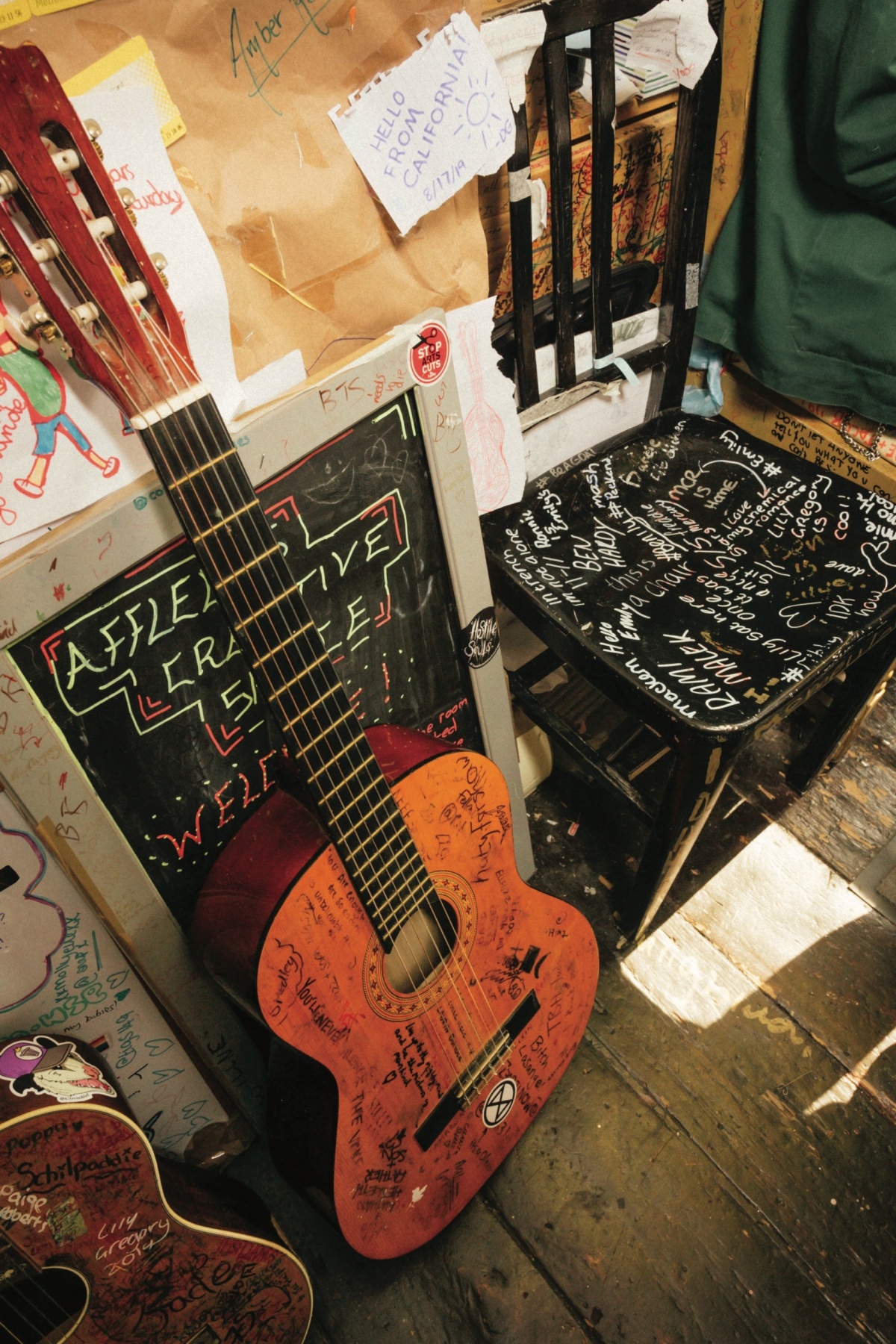 A quick look around the space and you’ll find all manner of weird and wonderful things, from a folder with endless drawings of eyes, to a guitar, etched with its many owners, right down to photos, graffiti and even the odd bar of chocolate ready for the next person who uses the space to enjoy.

Joy is clearly massively proud of what she’s managed to create, explaining how “anyone can use it and it’s even managed to become a safe haven for people who sometimes find other places more difficult, such as members of the LGBTQ+ community, the socially anxious and people with Asperger’s.”

There’s only one rule for the creative space and that’s everything needs to be ‘nice’
– there’s no space for bad vibes or negativity in there. If somebody creates something that’s not nice, it’s the responsibility of the next person who uses the space to turn that thing from being ‘not nice’ to ‘nice’ – a fact that Joy hilariously explains has resulted in a lot of attempts by people to turn penis drawings into all manner of animals, rocket ships or whatever else comes to mind!

Sat in the space you’re instantly relaxed and speaking with Joy is an absolute pleasure. As I begin to ask her how the creative space came about, we delve head first into her life growing up and her later career as a teacher who helped difficult or struggling teenagers get back into the classroom after suspension. 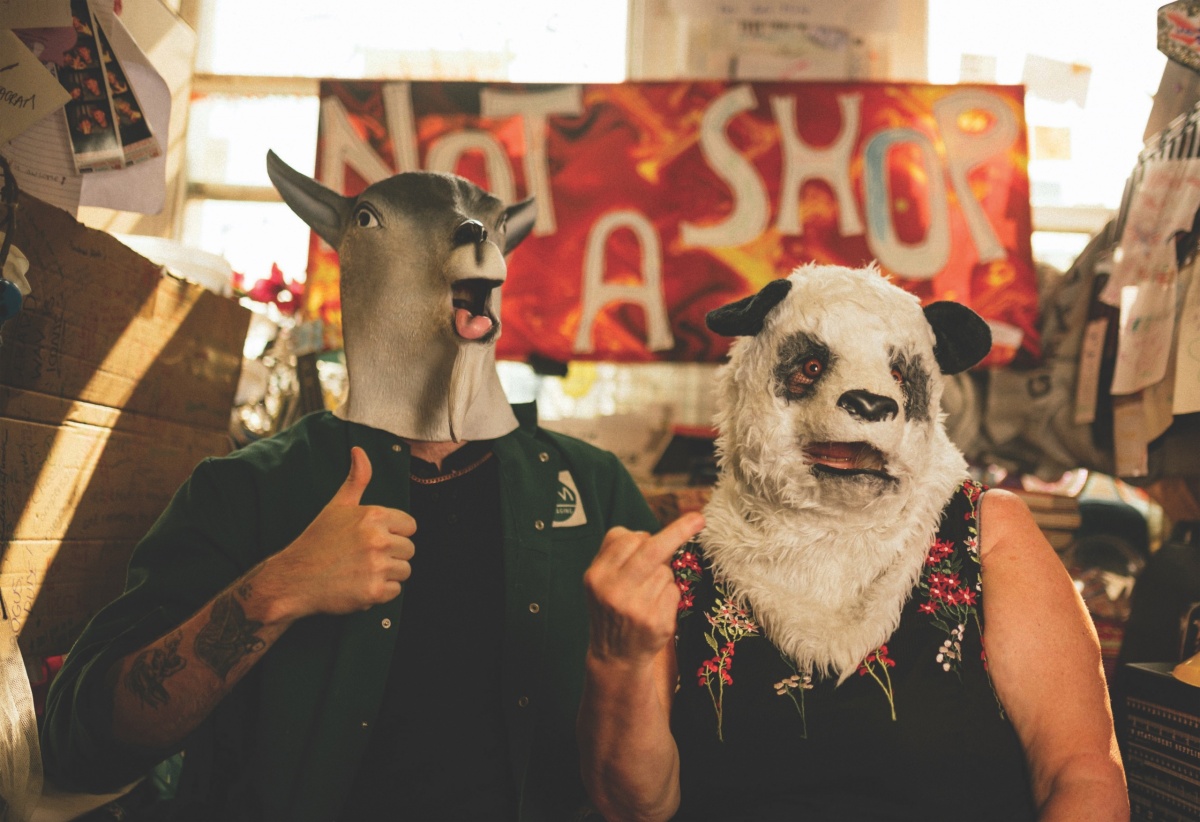 Born in Little Hulton, Joy explains how she was a very shy girl growing up, often crippled with anxiety and a desire to be “invisible” when walking the streets or in any social interaction. Although she was fine with family and certain friends, shy Joy would often struggle with strangers and found interactions both difficult and daunting to say the least.

As she grew up and got a career, the shyness continued, and although a job as a Primary School Special Needs Teacher helped out with the anxiety, it still remained. Her work with difficult kids helped her to grow more confident but, as with many careers, Joy started to feel that the whole job was becoming stale – she’d outgrown it and wanted something new and exciting.

As a middle-aged lady, some would find it difficult to just up-roots and find a new career and new life, but Joy was determined to make up for lost time and get out there and improve her confidence. She decided on a new life choice – “to follow all of life’s co-incidences that turned up” – essentially saying ‘yes’ to as many events, opportunities and occurrences that come her way.

She fondly remembers the first ever thing that she said ‘yes’ to – an event at the Corner House cinema that resulted in her walking a cabbage around the city on a dog lead! 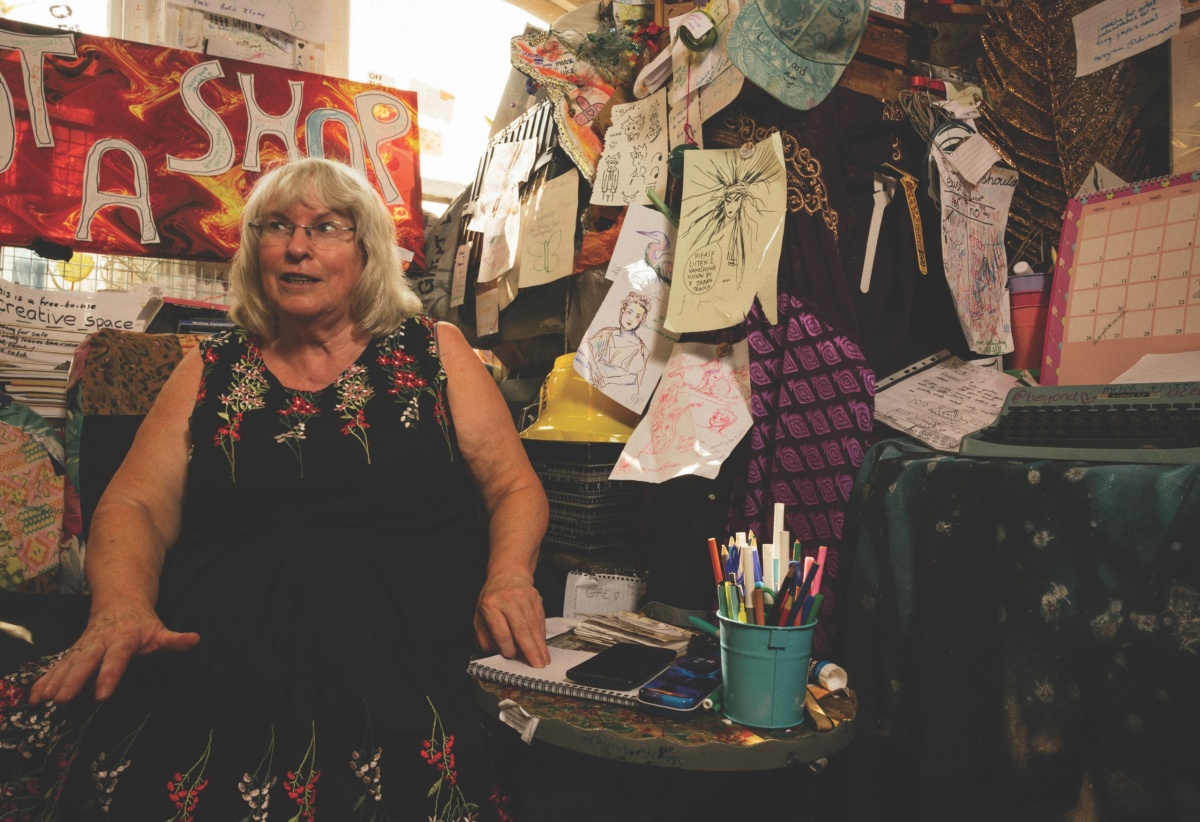 Artist Han Bing gathered a group of people to perform the live performance on the streets of Manchester with the aim to encourage people to “question the definition of normal practice and to reflect on how much of our daily lives are routines that we don’t really put much thought to.”

This clearly resonated with Joy and the choice that she’d made in her life and it was the beginning of a series of occurrences that have resulted in not just the creative space in Afflecks but also the poetry and battle rapping.

Shortly after the cabbage event, Joy headed to Wigan for a Poem Workshop,where she was asked to perform a poem. Of course she said yes, and set about writing a ditty about Wigan Pies, set to be performed in front of a large group of people.

As the anxiety crept in though, Joy felt she couldn’t do it, not turning up to rehearsals and genuinely considering packing the whole thing in. But she prevailed and even though she was shaking throughout – she did herself proud and completed the poem. 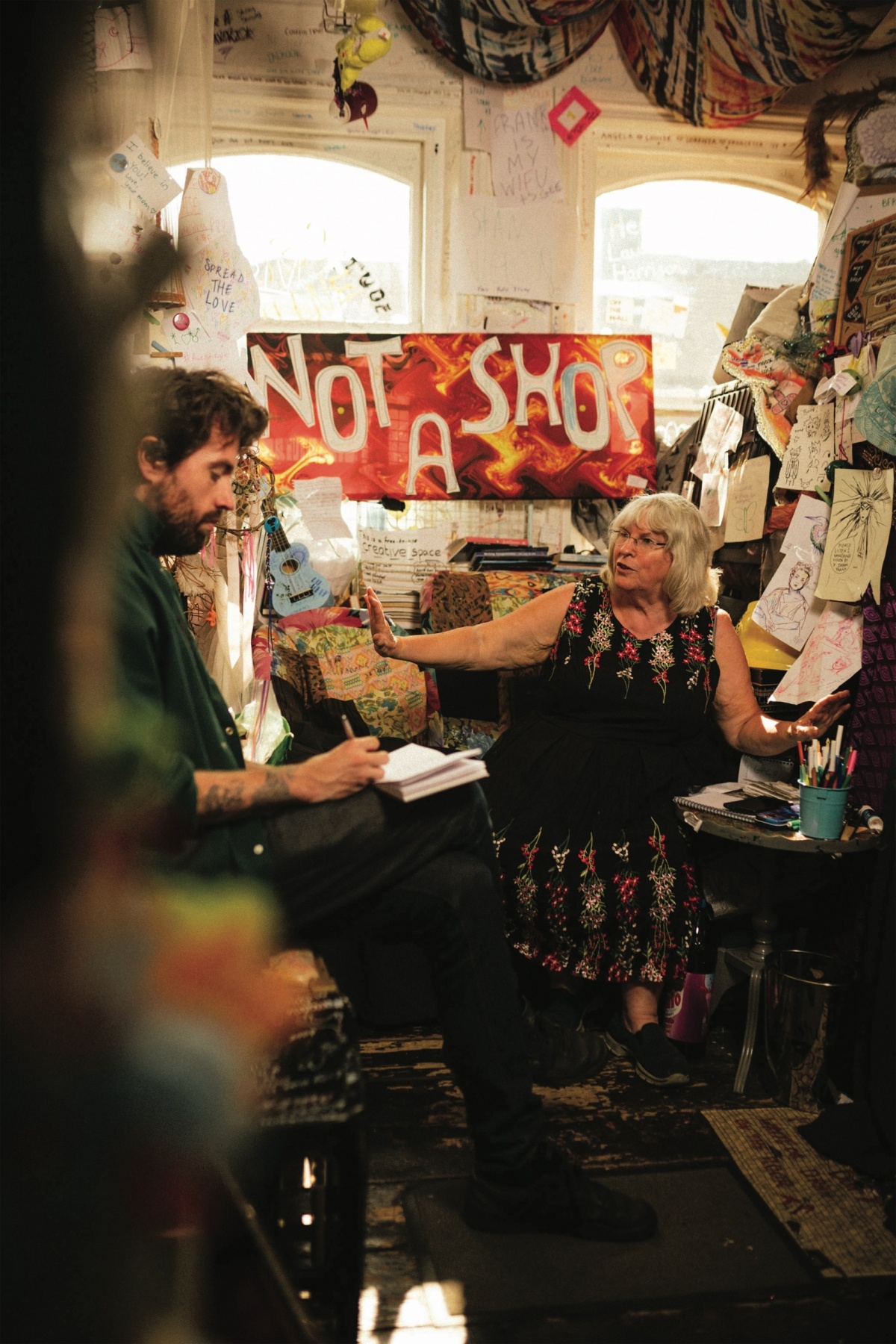 From thereon in she was a ‘poet’ – performing her poems at events throughout the North West, getting better and better each time. The poetry reading quickly turned into poetry slam, and with more and more events on the horizon Joy decided it was time to retire from the teaching and take a year out to “try all of that creative stuff”.

She never looked back and a chance encounter with the Manager of Afflecks ended up with her becoming the ‘Creative in Residence’ and getting her creative space for an initial 3 months. 4 years later and she’s still going strong, performing poetry, attending festivals and manning the space for the people of Manchester to use.

It’s here where she first started to get involved in rap battles, something that may seem a little bit ‘out there’ but something Joy insists is a natural progression from her poetry performances.

Joy embarked on a series of rap battle events where she was enthusiastically welcomed by the whole community. 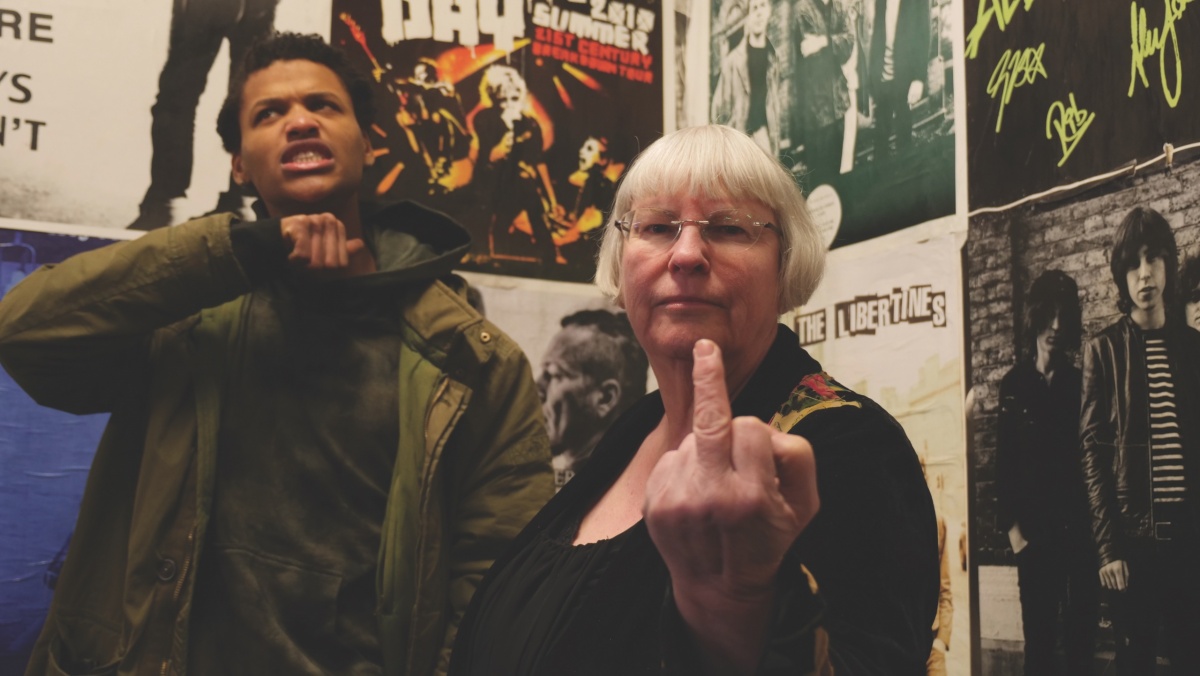 She insists that the whole thing certainly challenged her misconceptions at first. She was expecting to encounter a group of angry young men, but discovered the scene is incredibly friendly and open. A creative arena in itself, allowing men to talk openly with each other about their feelings and mental health.

As she continues to attend the battle rapping events, her skills have improved, and her own personal mission has become showing people that a “short, fat, grey haired woman in her 60’s can give them a run for their money”.

She’s looking to challenge people’s prejudices and misconceptions about what it means to grow old (and be a woman), just as much as her prejudices were challenged when she started rapping.
Whether it’s performing poetry while wearing a panda mask, doing TED talks at the University of Manchester or battling a bloke called ‘Hulk’ on the UK’s best known battle league. Joy is certainly re-defining exactly what it means to grow old (dis)gracefully.

She doesn’t want to be that “invisible little girl” any more and she’s actively looking to help others who feel the same way as she once did.