We never usually talk about Wetherspoons here, but I'm going to make an exception this once... 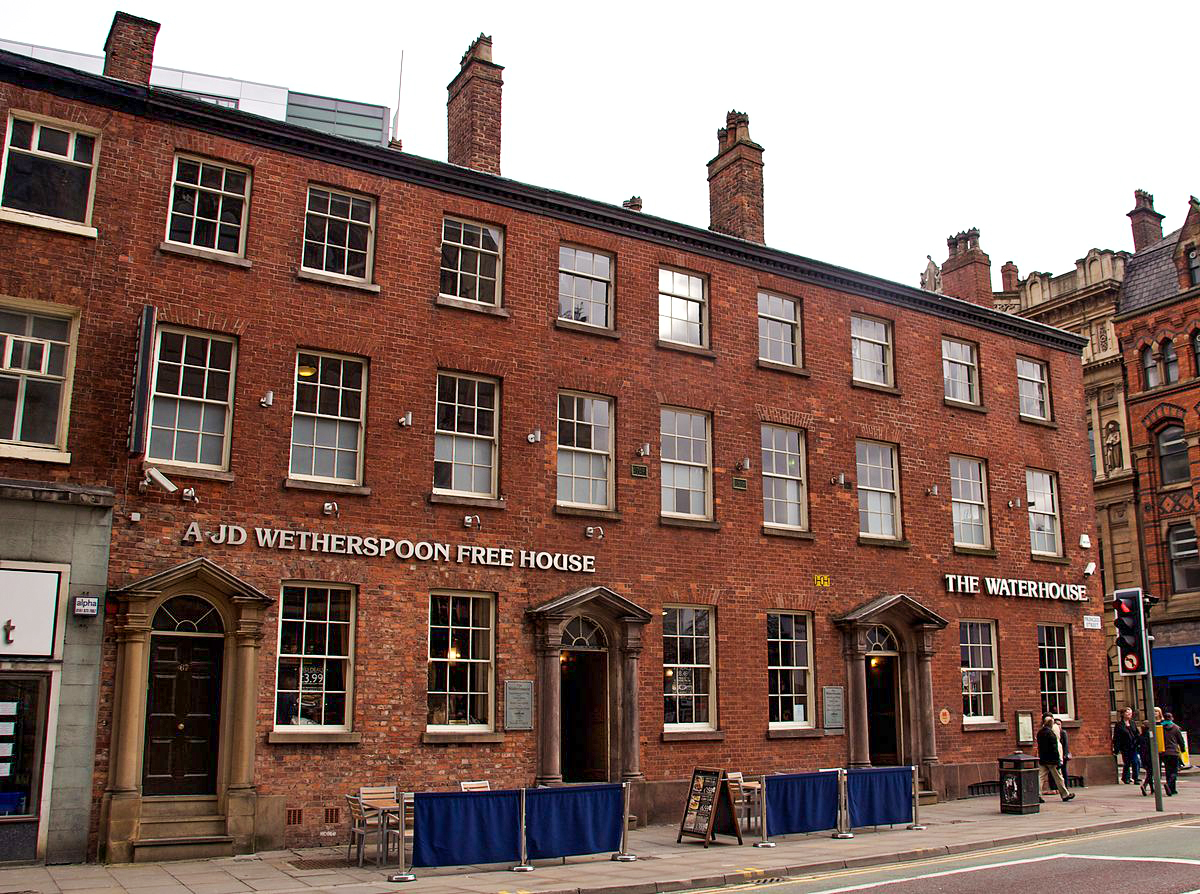 As champions of the city’s independents – we very rarely talk about Wetherspoons here at Finest – if ever, so this article is a rarity in itself.

But no matter what we all think of the nationwide chain, let us all just admit it here; WE ALL GO.

I certainly do – and I’m in a position where I can’t deny it any longer. Many is the night when someone comes up to me and says “Are you that guy from Manchester Finest!?” – putting me in a massively hypocritical position if I proclaim never to go, whilst sat there sipping a pint of Black Dragon and scoffing a cheap curry.

So – we all go to Wetherspoons. Glad we’ve got that off our chests.

But what about the city’s Wethers? Well, there’s the one at Piccadilly that resembles a cave (and actually features some real-life trolls on most days), the Paramount at the top of Oxford Road which is okay I guess, and the massive Moon Under the Water on Deansgate, which I once worked at for a week before walking out because they told me to shave my beard off. 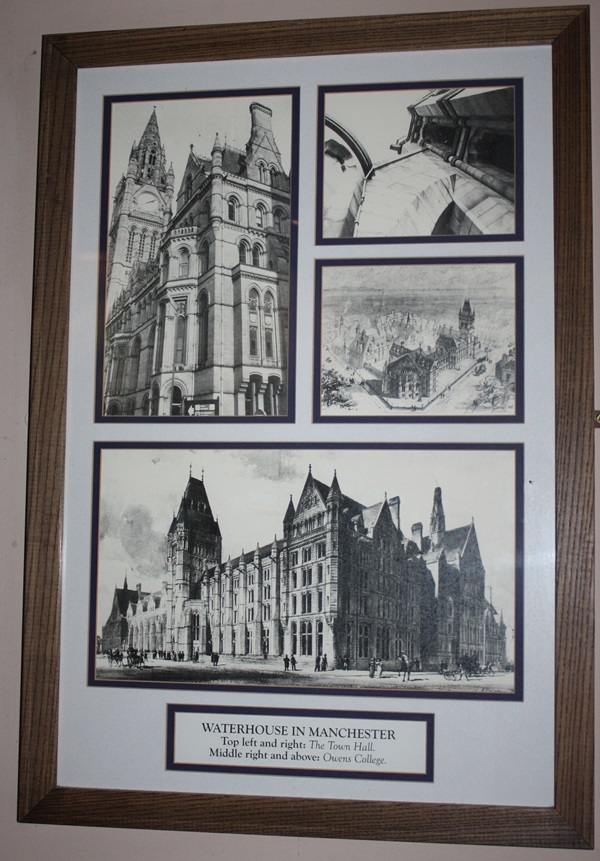 I’m forgetting the one in the Printworks aren’t I? Yeah, that one exists. Leaving only one – the POSHEST Wetherspoons in the city – The Waterhouse.

Now, I’d count The Waterhouse as easily my favourite Wetherspoons in the city, and after The Jolly Tars in Cleveleys and The Up Steps in Oldham – one of my most favourite ones in the country.

The whole pub is a lesson in the bizarre – but in a good way – and it’s all starts with the fact that it’s set across three Georgian town houses that they’ve seemingly managed to retain most of the original features for. One of the buildings was a solicitors before it was a pub, but before then – it’s thought that there was an orphanage here. 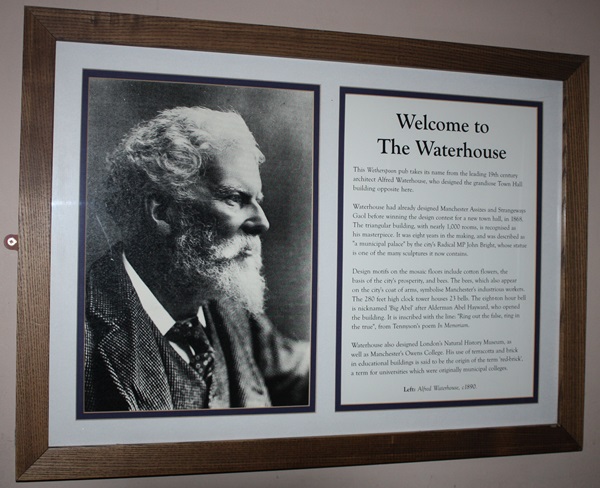 Even though there was seemingly an orphanage on every street corner of the city back in those days, I can’t find any evidence or mention of an orphanage being on Princess Street, but it may just be that records were lost (or destroyed) way back in the day when it was possible to disappear without a trace.

Starting at the most obvious point, The Waterhouse is, of course, named after Alfred Waterhouse, the architect who designed the imposing Town Hall directly across from the boozer. Pretty much a buildings legend in the city, Waterhouse also designed the stunning Natural History Museum down in London. Good work lad. 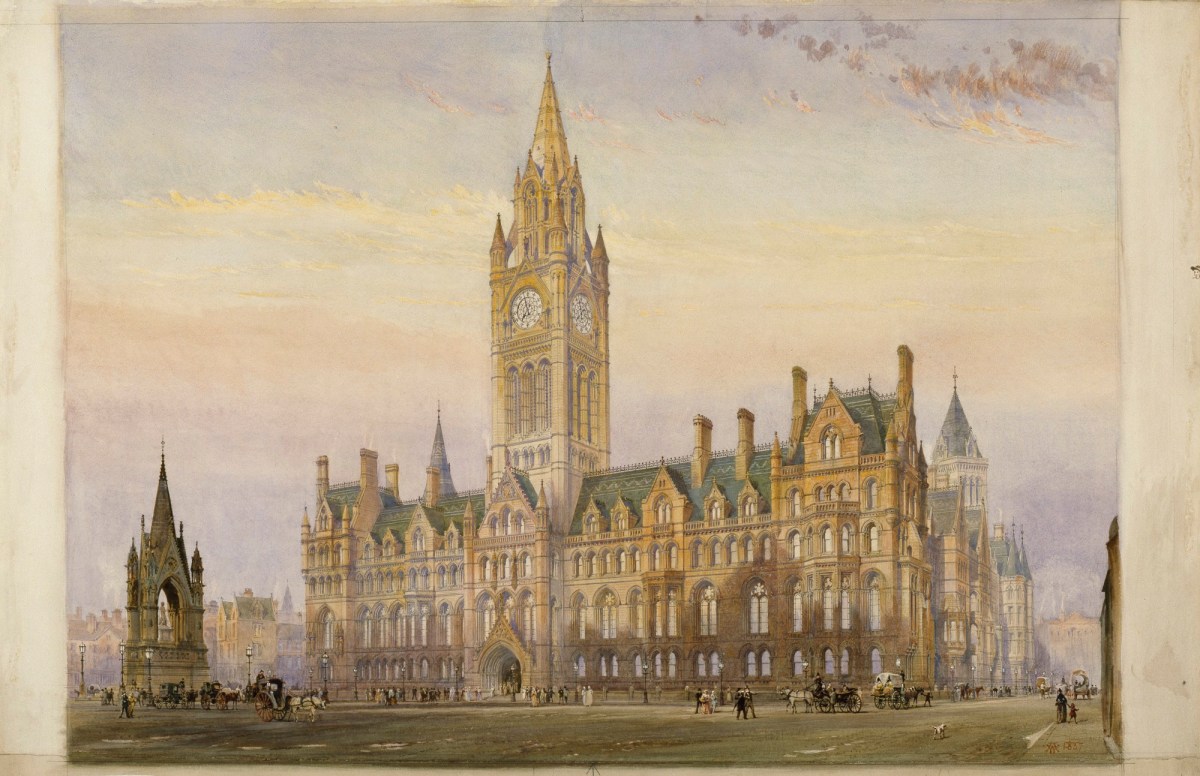 The buildings are one of the city’s last remaining examples of 18th century housing, and they still retain many of their original architectural features of the age. They were actually granted Grade II listed status back in 1974 so nobody can mess them up too much anyway.

The exterior of the the buildings are a typical example of late-eighteenth century architecture – with classic red brick with sandstone features – as well as the recognisable 12 pane sash windows that are characteristic of many Georgian houses.

You’ll also notice some bricked up windows on the corner of Cooper Street – though to have been done to avoid the infamous ‘Window Tax’ introduced in the 17th century and the source of the phrase – “daylight robbery”.

There’s a series of bizarre internal features to The Waterhouse though that are left over from the past – one of which is an actual glass floor that I’ve seemingly overlooked on every single visit to the pub. 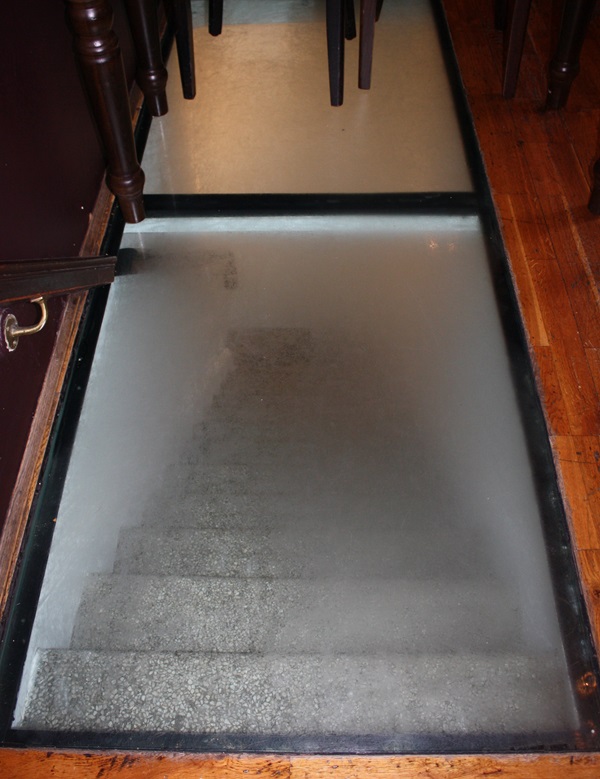 Basically, somewhere in the pub (I can’t go in at the moment to find it), they uncovered a staircase into the cellar below, which they then subsequently put some thick glass over the top of it so punters can see down into the dark depths of the building. How I’ve failed to notice this over the years I don’t know.

There’s also the really strange sculptures in here – ones which you seemingly don’t notice until you’re sat down and 5 Stella’s deep. 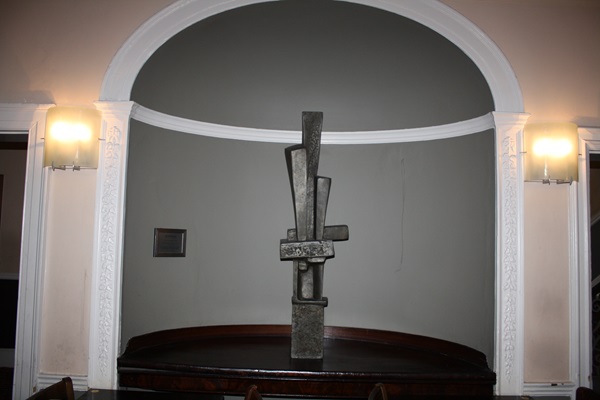 In one of the small side rooms you’ll find ‘Architecture‘ by Elsie Lyons, “an imitation of organic growth, translating natural forms into sold masses” as well as ‘The Architect‘ by George McGill right at the back of the pub. 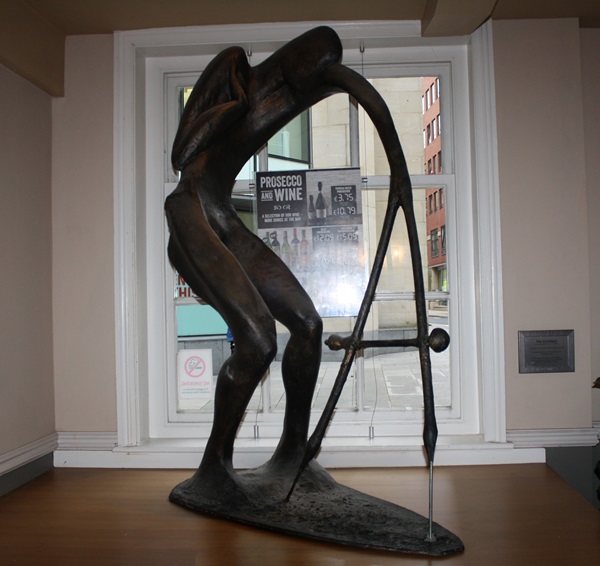 There’s even an old bookcase up the stairs opposite the toilets, which dates back to when the building was a solicitors. It’s even got books in it – although I’ve never checked to see if you can open it for some light reading whilst you’re on the bog – I doubt they’ll let people do that though – not in the UK.

The Waterhouse truly is an odd, but also a rather cultural experience – one which includes real art and history within its warren of rooms and corridors. I’m sure once lockdown is finished you might even see me in here minding my own business. Buy me a drink if you like – I’ll have a pitcher of Woo Woo please.