The city centre apartments where investors are BANNED…

We all know the score by now. A new set of apartments pop up in the city, some unknown investors buy them up, they rent them out to the people of Manchester and everyone is happy.

Well, that’s not always the case. The housing situation in the city centre and further afield is remarkably complex, whether you’re looking to buy or to rent. And if we’re being honest – not a lot of people are THAT happy about it all.

But thankfully there are people looking to make the whole thing simpler, one of them being the social impact developer Capital&Centric, who have decided to BAN INVESTORS at their new Piccadilly East development – Phoenix.

I sat down to speak with co-founder Tim Heatley, to talk about exactly what they are doing down at Piccadilly East and why (and also a little bit about the general state of the Manchester housing scene).

Sitting in Capital&Centric’s modest office round the back of Deansgate Locks I was expecting to be greeted with a rather stiff bloke wearing a suit – but Tim is certainly nothing like that.

Relaxed, friendly, chatty (and young), if you walked past him in the street or met him in a boozer you wouldn’t think that he was the founder of a company that is currently building some rather impressive multi-million pound developments all around the city.

As soon as I start chatting though, it’s clear that he has passion. A passion for doing something good for the city, and the people in it. Property is likely to be most people’s biggest life purchase, worries and desires – and C&C are clearly looking to move away from the current model of how things are done.

He explains how “95% of properties in Manchester are built purely to rent and to be bought by some abstract investor”, leaving prices high and “no sense of ownership” amongst the people renting – creating very little consequence “if that area succeeds or fails”.

So with their new development over in Piccadilly East, Capital&Centric have BANNED INVESTORS – meaning that ALL apartments in the buildings are to be owner-occupied. Something Tim is keen to point out all the positives to me.

It’s “regeneration in the true sense of the word, whereby the beneficiaries of the improvements of an area are the people who live there and own there, instead of the beneficiary being some abstract investor somewhere.”

Tim explains how you therefore “create a self sustaining community, with everyone putting the hard work in to make the area liveable and ultimately great”.

So, as well as banning investors, their new Phoenix apartments (along with Crusader Mill next door) are looking to be the new central hub of activity in the area, one which has sadly been a little neglected in recent years.

That’s all set to change though as they ensure that “there’s enough projects in the area… so that there’s a community and things are actually going on.” Be it street artist events, live DJ sets, street food, as well as the introduction of the brilliant Chapeltown Picture House (due to reopen again soon).

There are also extensive plans for a hotel, a public square, bars, restaurants and studio space all earmarked for the area.

We’re looking to “reanimate and reactivate the space”, and Phoenix and the people who live there are set to be front and centre of that.

Tim explains “This is what I think is the difference between regeneration and gentrification, gentrification being where some investor says; I’ll put some money in because i know I’ll get some back out and that’s all i’m bothered about, whereas regeneration is about making sure the people who decide to own a house there or start a business there, they should be the ultimate beneficiaries of the prosperity of the area.”

Tim was also keen to point out that the apartments at Phoenix are on average 35% bigger than other city centre flats – again, something that aims to appeal to those looking to own and occupy.

This Saturday sees Phoenix open their doors for people to have a look around, but unfortunately it’s SOLD OUT. So they’ve added extra dates on Saturday 15th & Sunday 16th February. 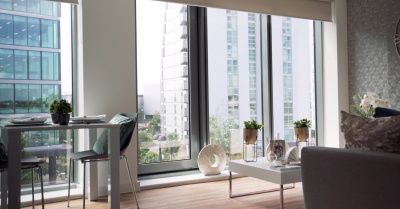