Exploring the Key Ingredients & Rules for creating the Perfect Paella

One of Manchester's top Spanish restaurants opens up about what makes the very best paella... 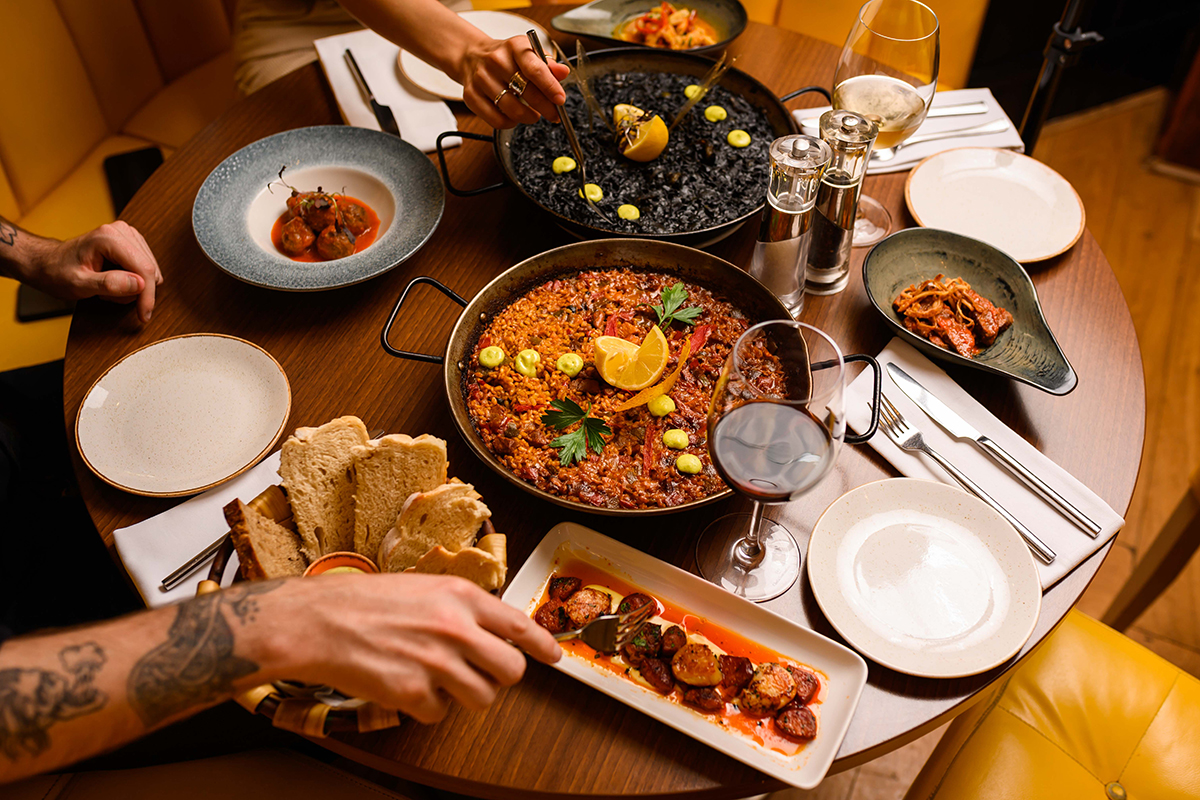 It is an undisputed fact that Paella originates from Valencia, an area known as one of the best places to grow rice in the whole Mediterranean after it was brought over from the Middle East some 12,000 years ago by the Moors.

Paella is a dish of humble beginnings, designed to feed a lot of people at once, using what was around them for as little cost as possible. Traditionally speaking, Paella was used to feed farm workers and outdoor labourers and was cooked in huge batches over a coal fire at lunchtime.

This week saw researchers in Valencia release 10 ‘commandments’ of what should, and what shouldn’t go into a Paella – the Do’s & Don’ts – and it makes for interesting reading.

As a result, we’ve examined their new rules and spoken to our favourite Paella purveyors – La Bandera – to see what actually makes for the Perfect Paella. 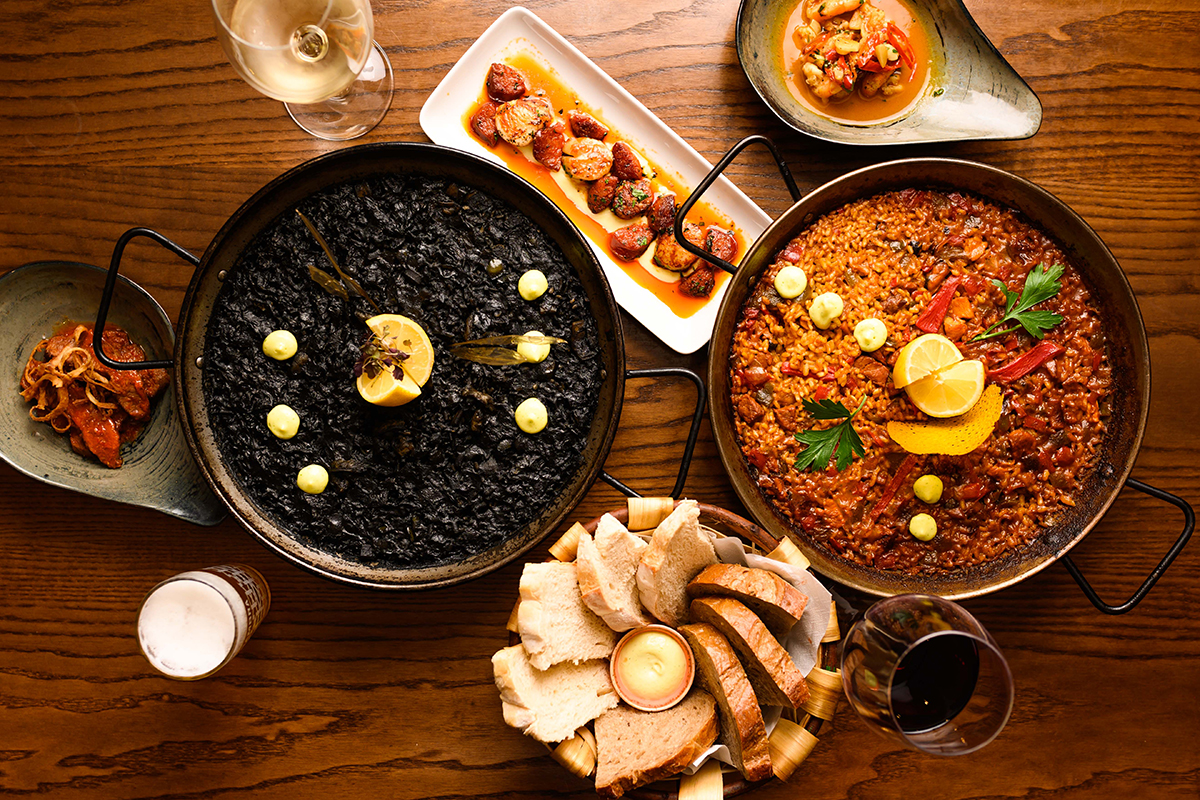 It’s totally understandable that Spanish people have a real passion for their national dish, and we can certainly sympathise with them – for when we see a Full English done badly or a crappy Roast Dinner – we’re totally inconsolable.

So this week saw scientists at Universidad Católica de Valencia ask a question to 400 amateur chefs from 266 Valencian villages. The question? What are the ingredients of a Paella Valenciana?

90% of the people asked agreed on 10 essential ingredients…

Rabbit?! Yep, a traditional Paella from Valencia has always featured rabbit, perhaps with chicken and even snails and that’s it. Ultimately Paella is primarily a RICE DISH – with all the other things as additional extras dependent on where you are in Spain.

Much like the people of Melton Mowbray, the Valencian people consider their version of the dish to be the ONLY acceptable way to eat PROPER Paella – and everything else just isn’t.

When we spoke to Yashin, owner of La Bandera, he was in agreement about one thing that came from the study – that at no point should Chorizo EVER be put into a paella! 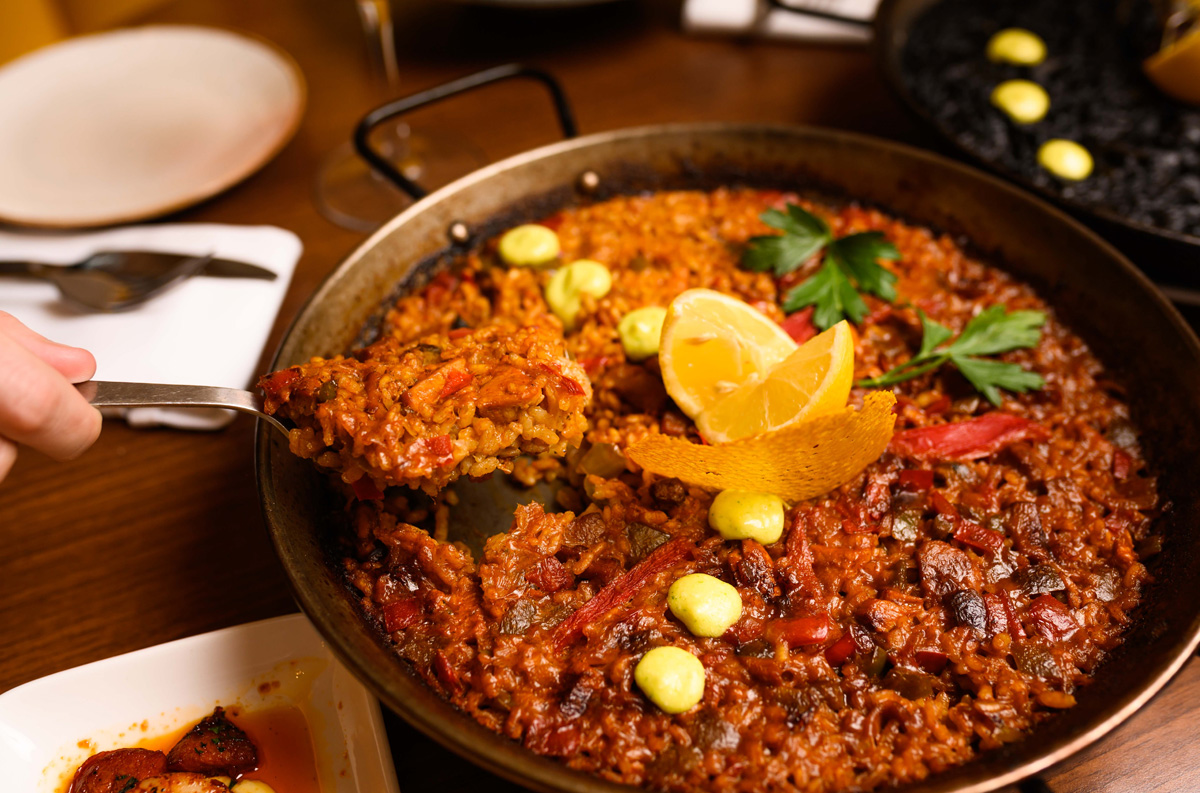 First introduced to the wider world by the one and only Jamie Oliver, the Naked Chef (as he was once called) united the whole nation in horror with a paella recipe that included the spicy sausage, alongside chicken thighs.

Spanish people responded in kind with some choice words… “WTF, Jamie Oliver?” could be heard across the internet, and most likely in bars and restaurants across the land.

Yashin agrees completely, and you won’t find chorizo in any paellas at La Bandera. They’ve not kept to the Valencian ‘Rules’ though – as the restaurant offers a Canarian variation on the classic dish.

Born on the island of Tenerife, Yashin has transported the unique cuisine of the Canary Islands to La Bandera right here in Manchester – and so you’ll find some very special variations of traditional Spanish dishes on the menu. 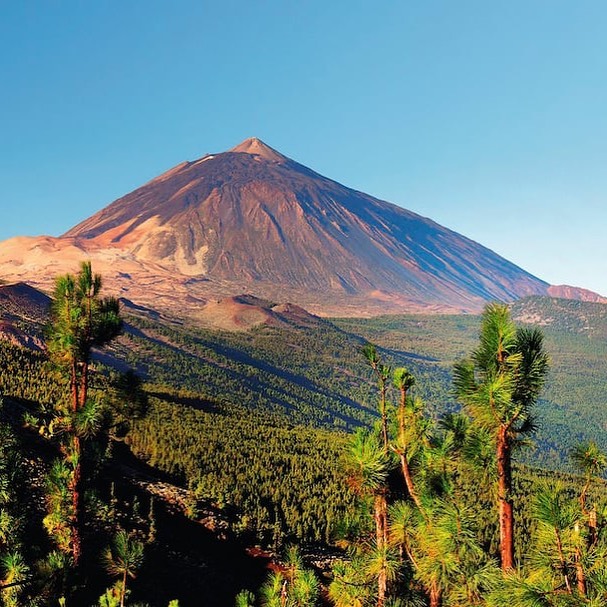 For one, Valencian’s proclaimed this week that there should be “No fish or shellfish”, but considering they’re surrounded by water, and the exceptional quality of their fresh seafood, the Canarians absolutely LOVE to put it into their paella – a fact that’s mirrored on La Bandera’s menu.

Their best selling Paella is the show-stopping Negra de Calamares y Gambas (£32.50) – a BLACK Paella that’s made with fresh squid, king prawns and squid ink. Equally, their Mar y Montaña (£32) is a sea and land offering, with meat and shellfish. Their newest offering is a fully vegan one – Arroz de Setas – which is made with wild mushrooms and is absolutely sublime. 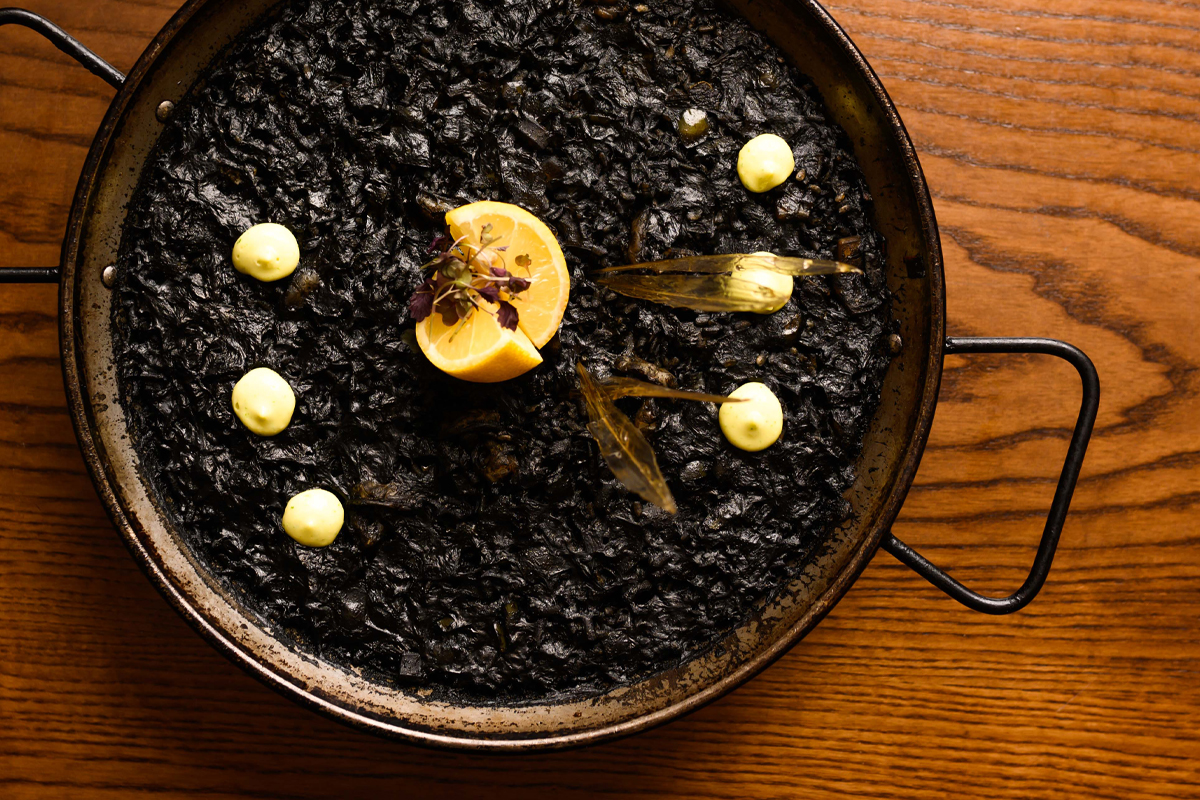 Yashin is keen to stress that the paella in La Bandera are strictly Canarian – and as such take advantage of the islands’ rich cultural influences and abundant seas.

What La Bandera does stay true to, however, is the use of Bomba rice – the traditional rice used in Paella which is grown in Valencia. This rice is small and round in form and sweet and nutty in flavour which is perfect at capturing that authentic taste of paella.

I think it’s safe to say that paella itself has evolved over the years, meaning the number of combinations and variations are endless and in our view – anything goes – there is no right or wrong approach to Paella. But be warned – if you’re cooking paella for someone who is Spanish – leave the Chorizo well alone!

La Bandera have also recently introduced new PAELLA KITS, containing most of the ingredients that you need to go about making a delicious and authentic dish – all that you need to add is some meat, vegetables and some heat – depending on your preferences of course! 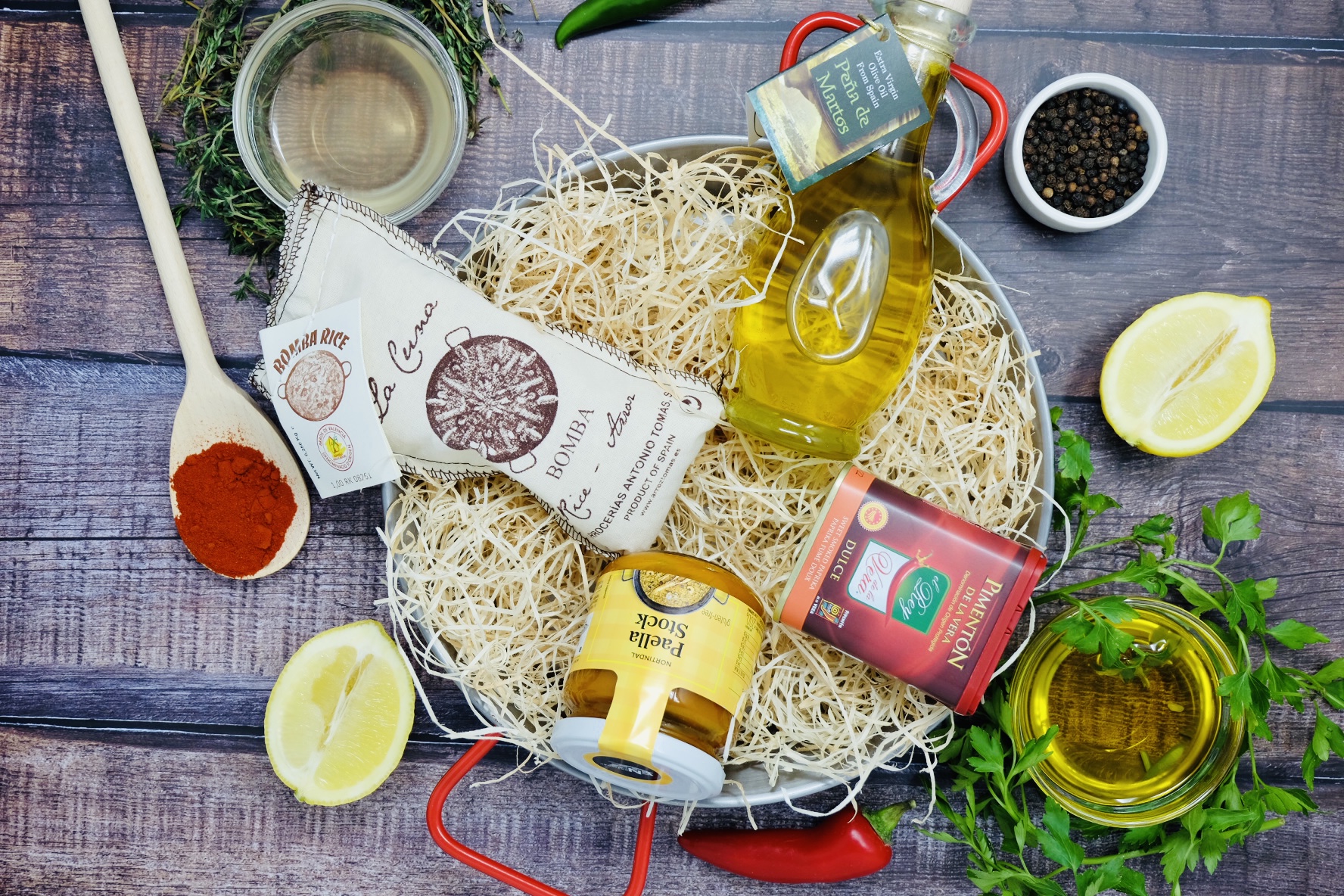 Sat atop of lovely new steel Paella Pan, the kit contains bomba rice, paella stock, sweet smoked paprika and some extra virgin olive oil – all sourced and shipped over from Spain – so you know that you’re going to be making something authentic here.

The kits are available to order from their online deli.