Doctor Dee: The Man who brought Satan to Manchester I only just found this out today, but the devil, like the ACTUAL devil, Mephistopheles, Beelzebub, Lucifer, Satan – that guy, well – he’s been to Manchester.

I don’t actually think the devil himself is omnipotent, so it’s quite rare for him to actually visit places, but yeah – he was conjured back in 1600 in Chetham’s School, and he even left a hoof burn on a wooden table to prove it.

I know what you’re thinking; “What a load of bollocks!” but really – just look at the picture of the hoof mark and tell me that it’s not the work of the Prince of Darkness and his goat-like legs… 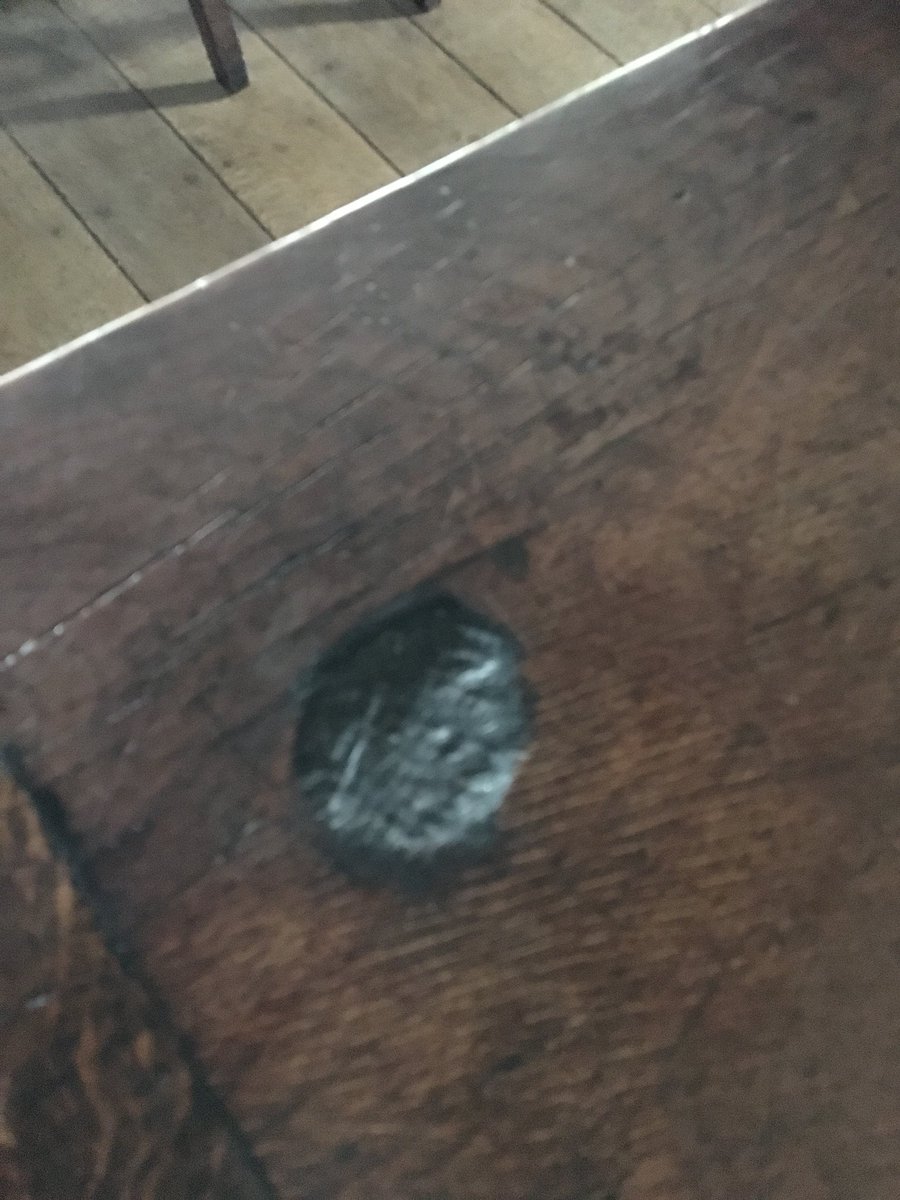 See. I told you that it was true and that it all actually happened. I wonder what he thought of the place? I suppose it was a lot different back then than it is today, probably just a load of fields with the odd cottage knocking about – certainly no restaurants or bars in which he could enjoy himself.

The story of how Satan managed to find himself in Manchester is one that revolves around one fella, Dr John Dee, Court Astronomer and Advisor to Elizabeth I and a man whose exploits caused a huge stir at the time, and have continued to intrigue historians since his death, penniless living in poverty in London.

The story of John Dee’s life is long and very, very interesting. At the tender age of 15 he arrived at St John’s College, Cambridge and within a few years his reputation as a magician was cemented with his use of chemicals for clever stage effects during a production of Aristophanes’ Peace. 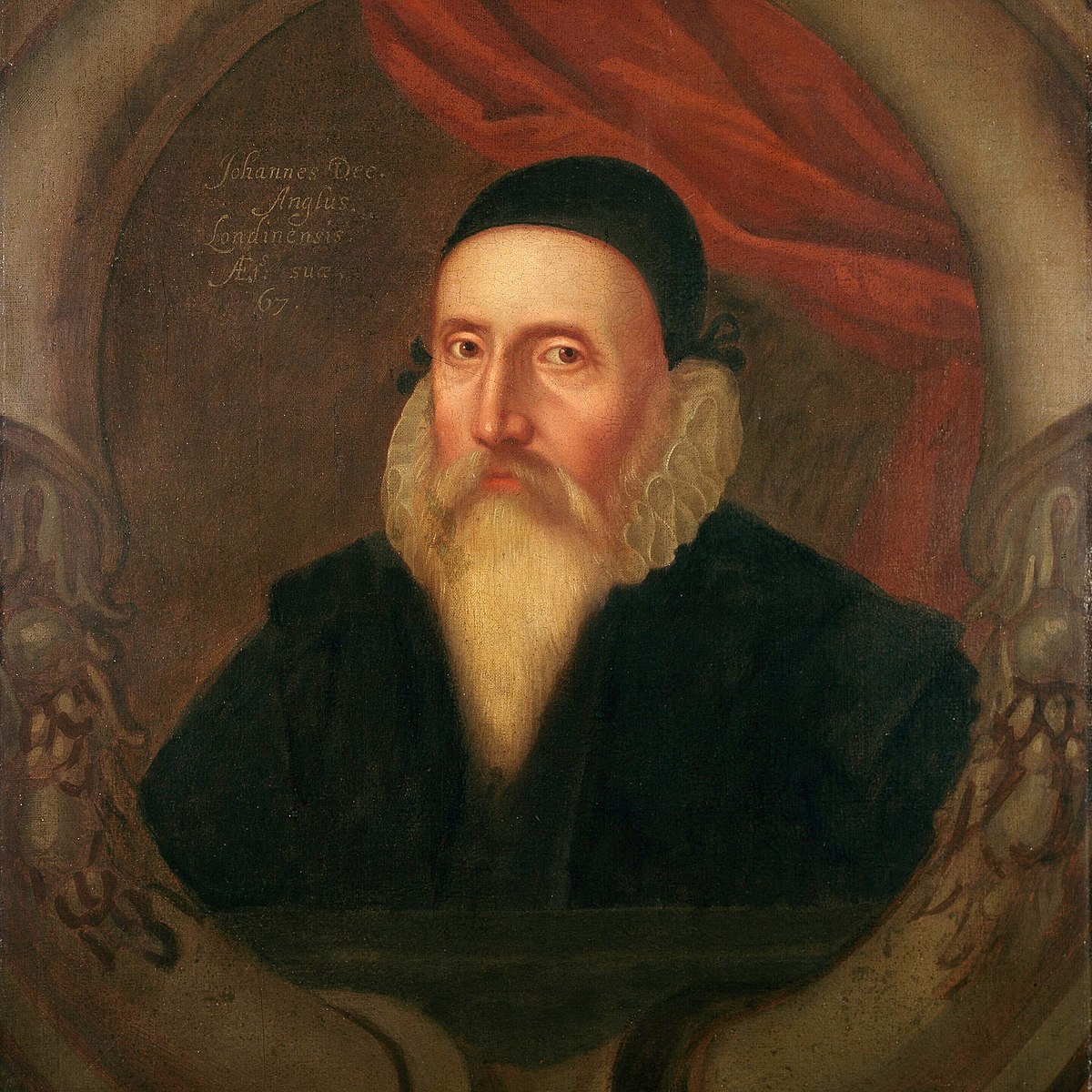 In the show he created a giant mechanical beetle, a spectacle that shocked the audience into actually believing that Dee must have conspired with the devil to create it.

From here he travelled around Europe for a few years, returned to England with a major collection of mathematical and astronomical instruments and in 1552 began investigating scientific as well as magical discoveries and oddities – including an attempt to create a perpetual motion machine, and a fixation on a gem which was supposed to possess magical abilities.

While this was going on, John Dee found himself arrested and charged with accusations of using witchcraft after he had cast horoscopes of Queen Mary and her younger sister Princess Elizabeth. Eventually exonerated by the judges he faced, Dee came face-to-face with the infamous heretic hunter – Bishop Bonner – a hugely feared man at the time. He became known as “Bloody Bonner” for his role under the Catholic government of Mary I of England – for his persecution of heretics and Protestants. John Dee though, instead of making an enemy of the man, befriended him and kept him close to him.

This wasn’t for long though, as Mary’s reign lasted barely five years before being succeeded by her half-sister Elizabeth, where upon the country became Protestant once again and “Bloody Bonner” was sent to the Tower of London to die a slow and boring death. 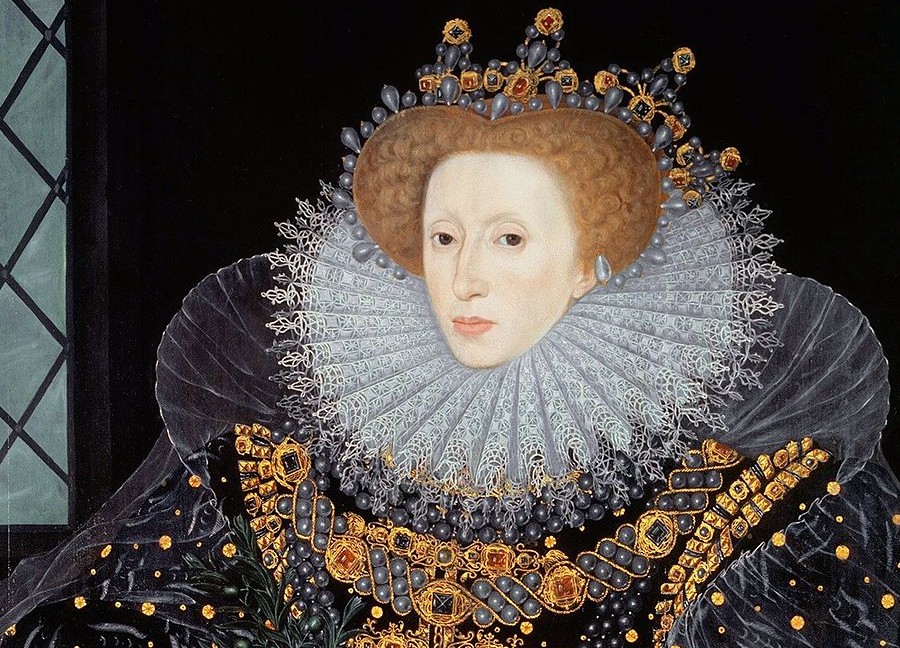 Dr John Dee though – he became Elizabeth’s ‘conjurer’ – appointed by the Queen as ‘Royal Advisor in mystic secrets’. Lizzy would often depend on Dee for matters in science, medicine and exploration and the two often wrote letters to each other in secret codes during times of war.

Dee actually took to signing his letters ‘007’ – a designate to highlight that the letter was for the queen’s eyes only – later adopted by Ian Fleming for James Bond. Bet you didn’t know that did you!?

So, this first half was the rise of John Dee, and like pretty much every single biopic ever – now comes the fall. And what a fall this is set to be. As religious leaders became more and more obsessed with the notion of witchcraft and the occult, Dee’s experiments and actions started to become suspicious. 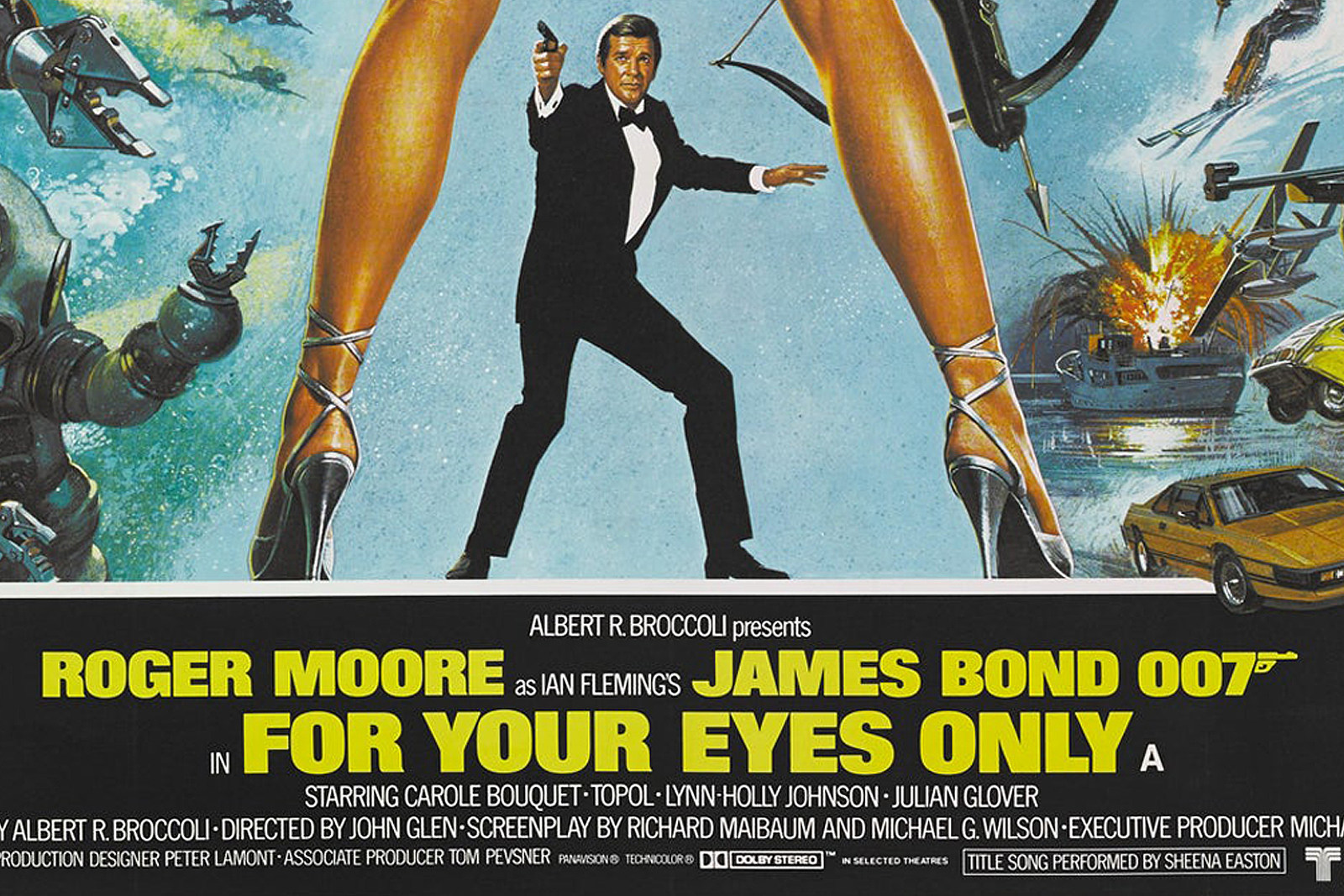 Even though he was actually merely doing simple physics experiments, Dee’s reputation as a magician and alchemist meant that Dee was often accused of using ‘magic’ and conjuring supernatural forces for his bidding. One thing that didn’t help though is that he was often found to be telling people that one of his goals was to “converse with angels”.

This got Dee into hot bother, as Necromancy was a crime punishable by death, and with the addition of rumours of psychic séances and wife swapping – Dee was quickly becoming a dangerous man to know. In fact, Dee has a ‘Scryer’ (think Mystic Meg) who went by the name of Edward Kelly. 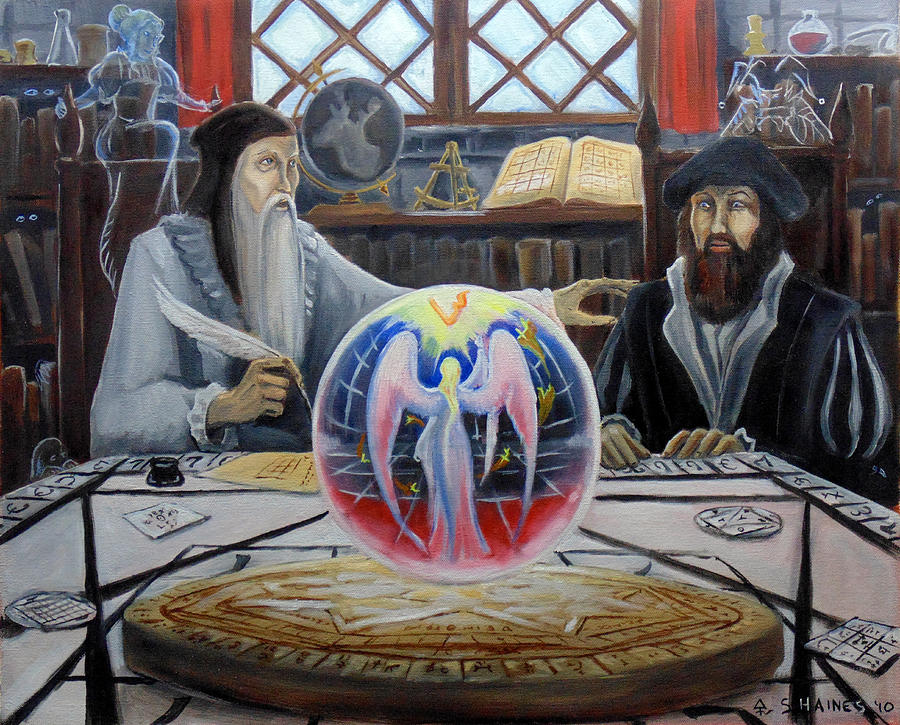 Kelly actually told Dee that he’d had an “intense” conversation with an angel where afterwards he reported to Dee that the angels insisted that the two men surrender each other’s wives to one another – essentially a wife-swap dictated by a celestial being.

What a pervert. But Dee actually agreed, and the two men did the deed and one of Dee’s kids, born nine months after the incident definitely wasn’t his. Definitely. 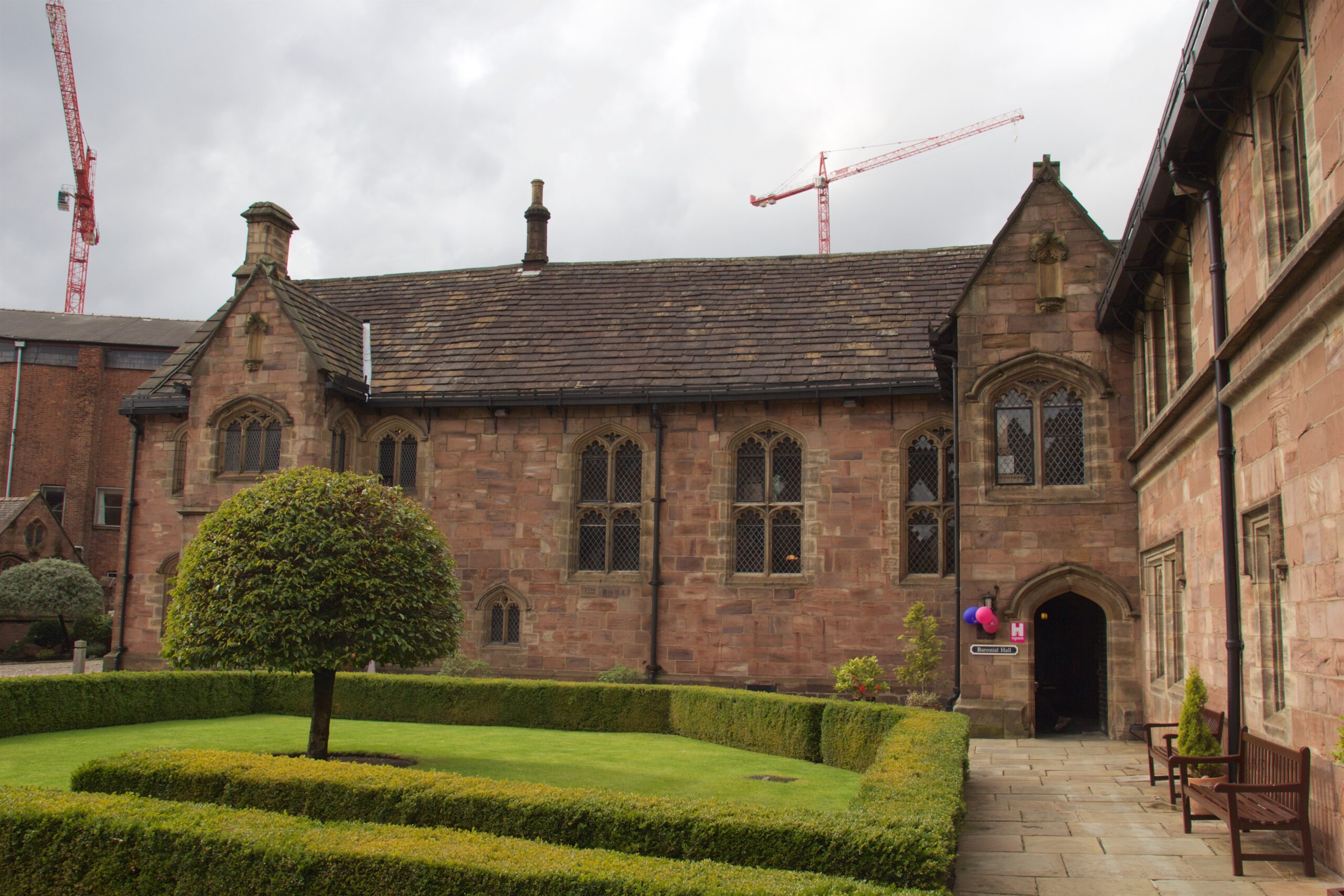 Accelerating his downfall, the death of Queen Elizabeth I in 1603 and the coronation of James I (or VI of Scotland) meant that Dee was given the elbow and ended up destitute out on the streets, dying penniless in a ditch somewhere in London at the grand old age of 81.

Before all of this though, Dr Dee was in fact the warden of the Collegiate Church at Chetham’s in Manchester, and on one fateful night during his tenure, it’s said he conjured up the devil using his ‘dark arts’ – leaving a hoof print burn on a table in the Audit Room.

So this magician, mathematician, astrologer, alchemist and occultist will forever be remembered for many, many things, not least the man who managed to bring Satan to Manchester, if only for a few seconds. 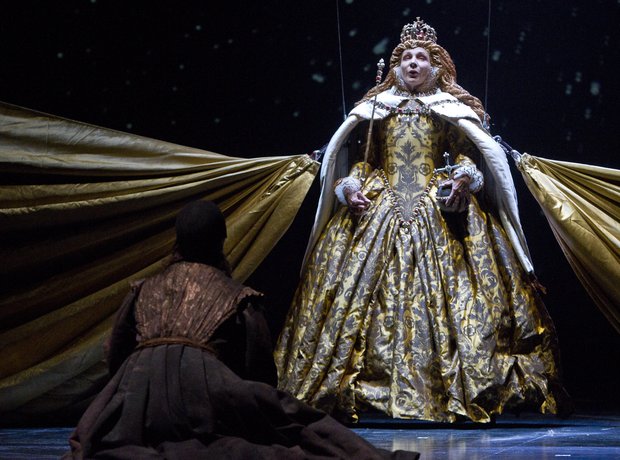 His life was turned into an opera by theatre director Rufus Norris and musician Damon Albarn back in 2011 as part of the Manchester International Festival – and if you got the chance to actually see it – you’ll know all of what I’ve just said above anyway. So good on you.

If you want to see Lucifer’s hoof – you can’t – it’s in Chetham’s Library still and nobody is allowed to see it or touch it. So don’t bother asking.