FREE Pizza, a Piccadilly Rats Movie & The Best Things To Do in Manchester This Week

Also includes more Sounds of the City, the Women's Euros kick-off, Northern Fashion Week and the return of the famous 8am Morning Rave with free coffee... 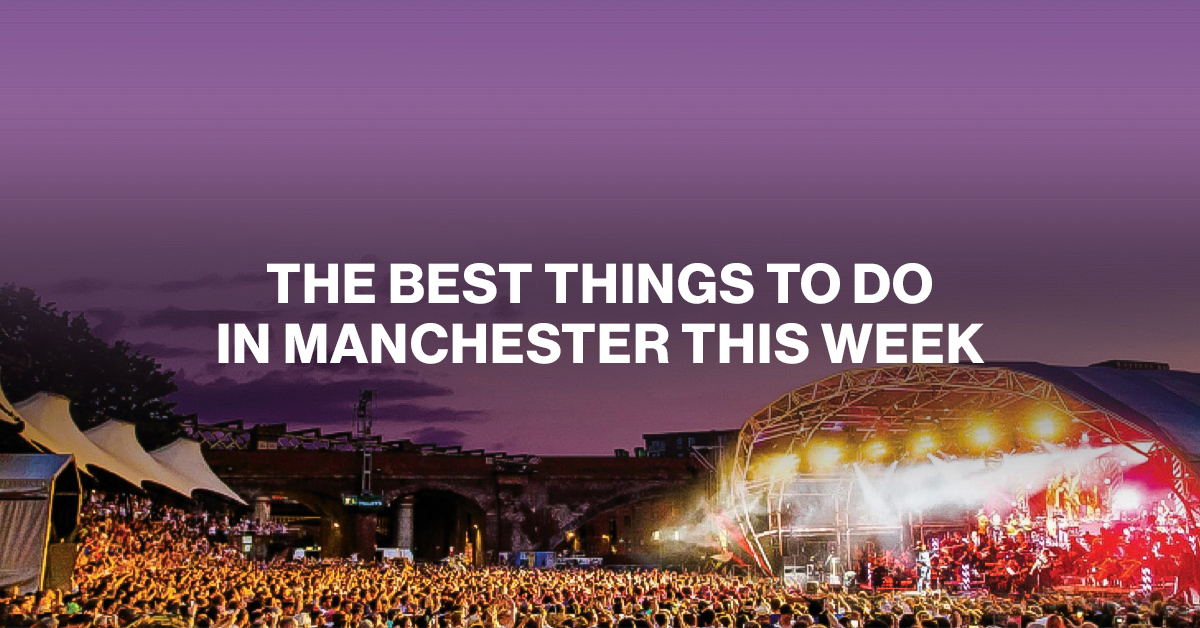 We’re now officially in July and we’re about halfway through the year. It’s also festival season and the city centre is no different, still hosting a very impressive roster of acts at Sounds of the City, and some pretty big events out in the suburbs too.

This week marks the opening of the Women’s Euros too, which kicks off this Wednesday with hosts England taking on Austria. I actually know nothing at all about men’s football, so the women have no chance with me. Apparently, we’re pretty good and could win it – although don’t take my word for it at all.

Also this week we’ve got some free and half-price food, Northern Fashion Week and a return of the famous 8am Morning Rave which did the rounds on social media channels back in April. Here’s the lot…

The Women’s Euros 2022 competition starts this Wednesday as hosts England take on Austria at Old Trafford. From there it’s the group stages, as 16 teams battle it out to get to the knockout stages and eventually be crowned champions of Europe. There are quite a few matches going on in Manchester, as Old Trafford and Man City’s Academy Stadium host matches, as well as over in Leigh, where the Sports Village will be hosting a few games.

So you can either get tickets for the live matches or watch it in one of the many, many pubs showing the games on their big screens. Oh, and there’s also a brand new Fan Park in Piccadilly Gardens – constructed out of some old shipping containers. So you can watch the games there too. For all the info – check this out that I wrote this morning…

Where to Watch the Women’s EUROs this July

This week also sees the launch of the first-ever Northern Fashion Week, a series of events that will look to champion northern talent and industry, showcasing talented individuals and game-changing organisations in fashion, media and creative industries. The NFW also works alongside the universities and regional educational providers to support growth and development and facilitate a sustainable future for the British fashion industry.

There’s a series of ‘Breakout’ events from the 4th – 6th July, with the main event taking place at Manchester Central from Thursday 7th – Saturday 9th July. For all the information on who’s attending, head on over to the NFW website, where you can also get tickets…

This weekend, Tatton Park will host a ‘Foodies Festival‘ featuring a host of music performers and world-renowned chefs – although they won’t be doing their stuff all together at the same time, unfortunately. On the music side there’s a bunch of people who you’ll remember from being a kid, including East 17, S Club (Allstars because there isn’t 7 of them anymore), Lee & Simon from Blue and Toploader, who I presume will just play that one song they’ve got on repeat (Radio Edit, Karaoke Version etc.)

Chef-wise it’s a who’s who of legends, with the likes of Simon Wood, Caroline Martens, Daniel Lee, Adam Reid, Aiden Byrne, Connor Black and many, many more. The festival will also feature talks and workshops with food experts, street food, a chilli eating competition, a Cake & Bake Theatre with expert bakers, and stuff for the kids to entertain themselves. For tickets and more information – head here:

This week sees the Greater Manchester Fringe in full force, with a Crisp Review show on Tuesday 5th, a cabaret of ‘Twisted Fairy Tales‘ and Mr Benn the Musical on Friday 8th, to name just a few. For a full list of the frankly massive line-up – go to their very informative website here:

What’s On at the Fringe

Popping into the city on Tuesday 5th is craggy-faced Welsh legend Rob Brydon, bringing his show ‘A Night of Songs and Laughter’ to the Bridgwater Hall, alongside his eight-piece band. He’ll be charting his personal musical journey from South Wales to Hollywood, with songs from Tom Waits to Tom Jones – and plenty of warmth and humour in there for good measure. Will the ‘Little Man in a Box’ make an appearance? Probably yeah. Ronnie Corbett too.

Over at the Science & Industry Museum, their current exhibition, Amazônia will be having a ‘Late’ night on Wednesday 6th July. An adults-only after-hours evening, the event will be filled with creative activities, interactive demos, music and special events.

You’ll be able to speak to world-leading experts from the University of Salford, watch the Uk premier of THEMÔNIAS, a series of four short films that bring together scenes of the exaltation of the Amazonian LGBTQIA+ aesthetic, and get hands-on with casts of fossilised monkeys from South America.

Finally, this week there’s two rather different film screenings to watch. First up is ‘The Piccadilly Rats: Live In Moderation‘ at HOME on Saturday 9th – the story of Manchester’s famous buskers and their ambitious journey from Market Street to erm… Parklife.

Then there’s the triumphant return of Make A Scene’s ‘Way too Interactive’ screenings, and this time they’re melding Muriel’s Wedding with lashings of ABBA. The beloved 90s camp classic will be screened alongside fancy dress, set recreations, drunken commentary and hostesses Lill and Banksie.

Is there anything better than FREE pizza? The simple answer to that is a big fat NO. And thus Chorlton is the place to be this Sunday, and every Sunday throughout July, as Electrik are offering Manchester’s Finest supporters a free slice as part of their special Sunday programming. They have a Happy Hour throughout the day with £5 cocktails, DJs and free slices for the Finest crew.

This Friday 8th July is WORLD KEBAB DAY and there’s probably no better day on the calendar – eclipsing Christmas Day, your birthday and World Cheese Day all in one. We’ll be taking a tour of the city’s very best kebab shops and takeaways, plus visits to a few of Manchester’s ‘posh’ kebab servers. In this respect, BAB will definitely be worth a visit as they’ll be offering 50% OFF kebabs ALL DAY on Friday! Just book a table online…

This Saturday 9th July, Pot Kettle Black on Angel Gardens will be hosting a new Mexican Brunch Fiesta – complete with Latin American-inspired dishes and Patron Tequila Cocktails. There’s the chance to try their Beef Barria Tacos, Tostadas, Quesadillas and even fresh Oysters served with chilli vinegar or a margarita shot. They’ve also created a special cocktail menu too, which includes a Beergarita, Bloody Maria and PKB’s very own Patron shots – all to be enjoyed alongside Manchester’s very own Poppy Roberts AKA P-RO on the decks.

Saturday 9th July sees Dinner by Ness team up with the recently opened Station South in Levenshulme to offer a French ‘Ooh La La’ Supper Club, with 3 courses and a drink for £35.

Across her career so far, Ness has cheffed in backcountry lodges in the Canadian Rockies, cooked in ski chalets in the French Alps, taught food and nutrition courses at High School Level and hosted popular Supper Clubs in Greater Manchester, Lancashire, Bristol and Weston Super Mare. This will be her first appearance in Levvy and one not to miss…

Thursday 7th July sees the long-awaited opening of The Beeswing at the burgeoning neighbourhood KAMPUS – a collaboration between wine expert Anna Tutton (the Founder of wine bar Vin-yard, previously at Hatch) and Joe Maddock (of West Didsbury favourite Pinchos tapas bar fame) who’ve been working together on pop-up supper clubs. The Beeswing will serve up an exquisite wine selection alongside a wide variety of delicious pinchos and small plates. The friendly hangout for lovers of wine and great food is situated on the first floor above Nell’s, it’ll be a great spot for a sun-trapped drink this summer, overlooking the lush gardens and canalside.

It’s back. The biggest club event in the city. Yep, Manchester’s famous 8am Morning Rave returns this Wednesday morning – a proper rave with a DJ and free coffee for two hours. It’s taking place at Factory Coffee at the bottom of King Street – on that square with no name.

Coming to The Deaf Institute on Wednesday is Slothrust, whose live show promises to be intimate and darkly poetic, with the band usually joined by a devoted crowd eager to hear the ethereal vocals of Wellbaum.

This week sees the opening of a brand-new music venue in the city – Canvas – which is actually billed as a “next generation cultural destination” with live music, club nights, members’ lounge, a 4am 7-days-a-week bar and restaurant, and digital platform. One of their first events is this Friday 8th with Sainté & KSR and the team from Habitat. It’s FREE and will be the perfect opportunity to check out this exciting new city centre venue.

On Saturday The Who legend Roger Daltry will be at the Apollo, a unique mix of music and conversation, built around his iconic musical journey and encompasses nearly every style imaginable – including blues, rock, country, soul and metal. During the evening he will also dig into his incredible back catalogue pulling from his nine solo albums, album with Wilko Johnson and even reinterpreting a few Who classics.

As mentioned at the beginning of the article, this week also sees Sounds of the City continue down at Castlefield Bowl. Lewis Capaldi will be there, as will Sam Fender, Pixels and Hacienda Classical plus Primal Scream will be on stage on Saturday, which promises to be a biggie.

Sounds in the City

Become a 1930’s Scuttler for the Day at this Immersive Gangster Theatre Experience!