Running three nights a week from Junipers Coffee Shop, Mexican Institute of Taco have been quietly making a name for themselves with a menu that perfectly blends invention and authenticity. 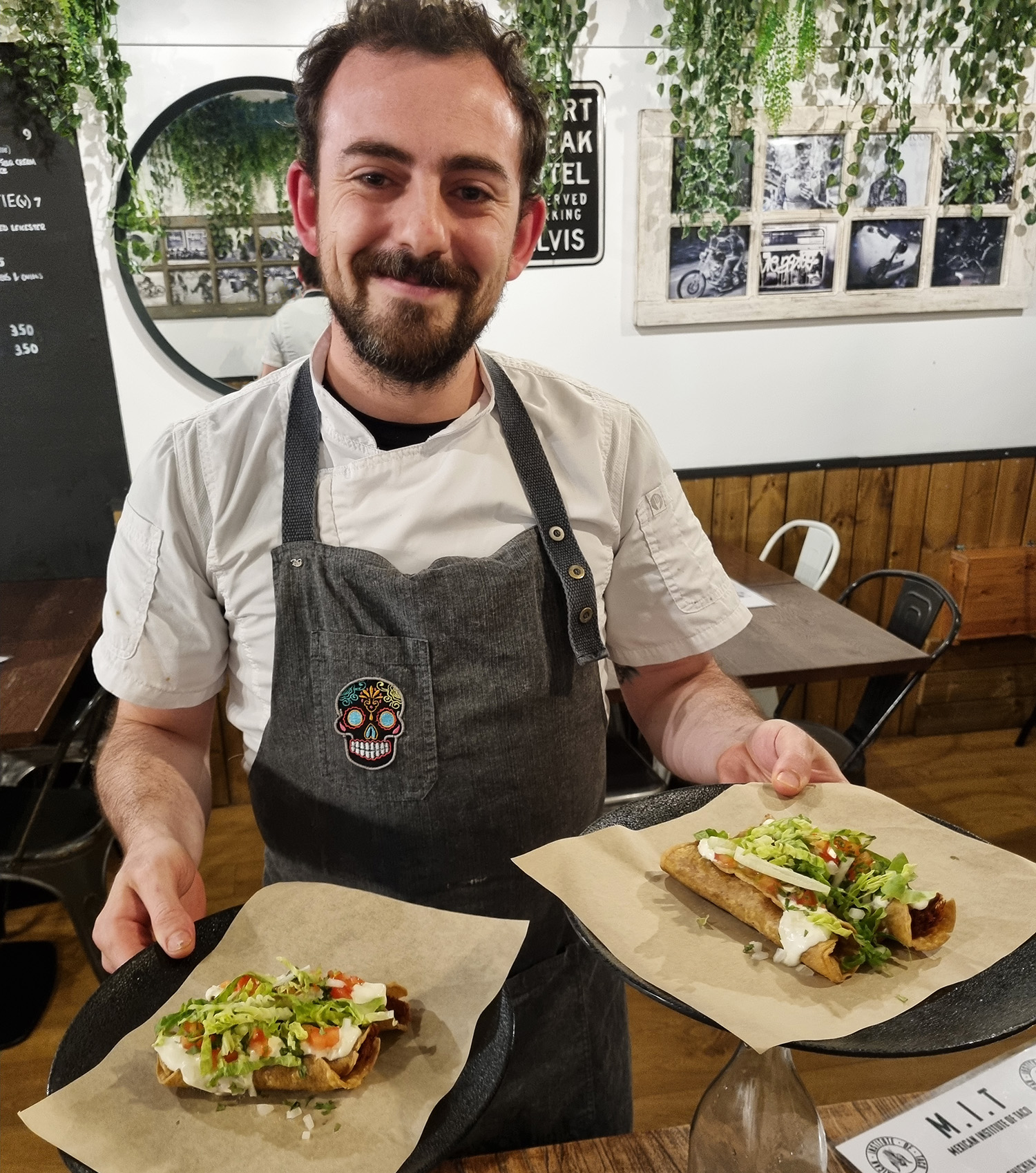 Somewhere between my fourth or fifth helping of napkin I look up from the table to see more tortillas arriving, “If it’s not messy it’s not a taco” Chema tells me laughing “and these are the messiest of the lot.” We’re nearing the end of a whistle-stop tour through the dishes at MIT and I’m feeling gleefully bewildered by how tasty everything that’s dripping down my chin is.

With a name like Mexican Institute of Taco you could be forgiven for expecting to find a professor in the kitchen, and chef Chema Pagaza – boasting experience cooking in Michelin starred restaurants in Spain and his hometown of Mexico City – might not be too far from that. Backed up by his partner Maria Marquez, the team have created a little slice of Mexico right on our doorstop. 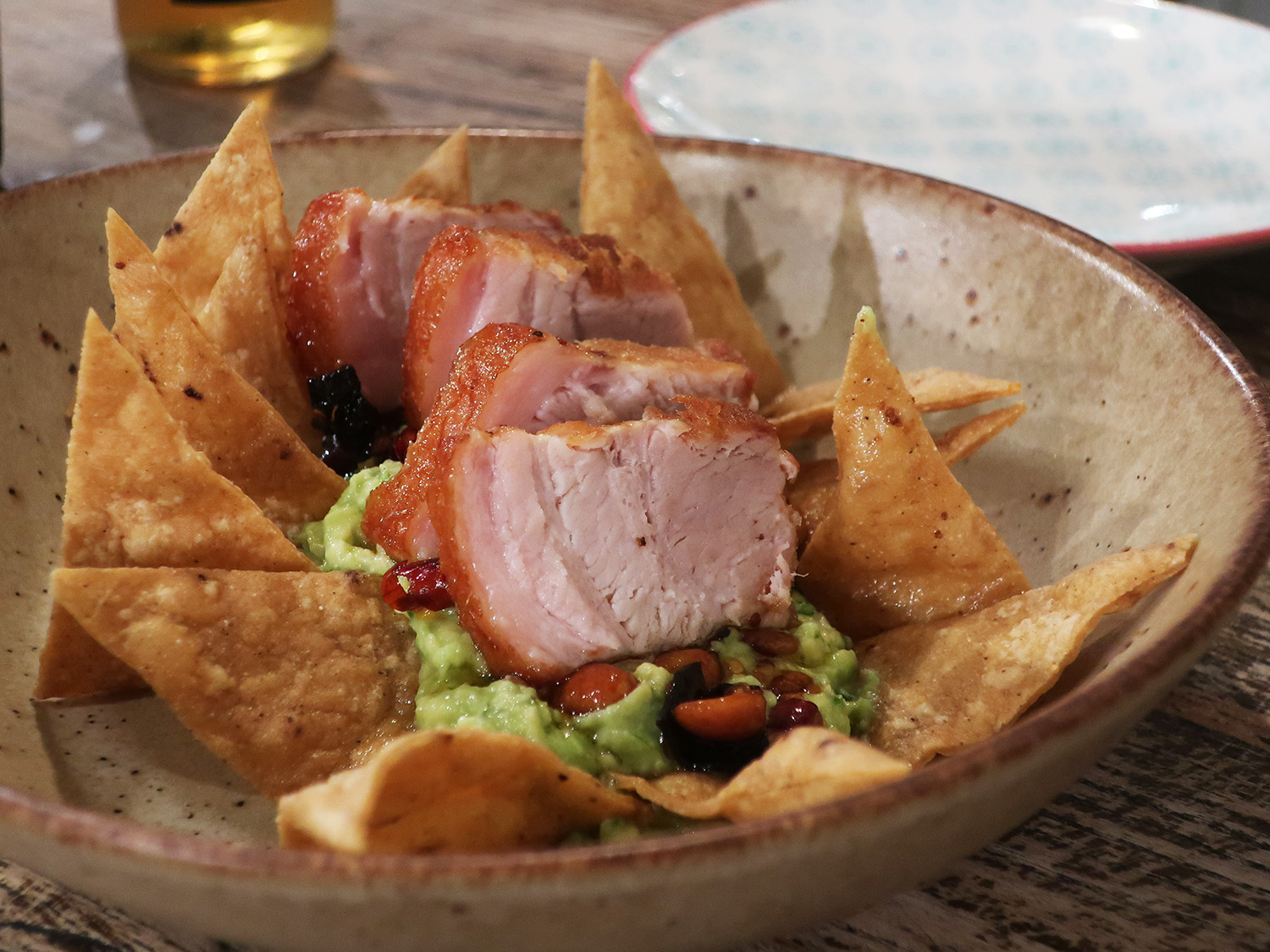 To begin, we sink into freshly fried tortilla chips and guacamole topped with crisp golden-edged, beautifully tender pork belly slices and salsa macha. The sauce is a slightly sweet, smoky and oily combination of nuts, seeds and dried chile de arbol which adds real depth and texture. It’s one of four specially prepared salsas to enjoy alongside dishes, each offering totally different flavour profiles and heat – no bottled hot sauce in sight here.

But we’re here for tacos, and kick off with one of the menu’s three vegan options, Mushroom Encacahuatado, a rich peanut, mushroom and chipotle stew. As with every taco on the menu it’s served the authentic way, lime wedges and sprinkling of diced onion and coriander. 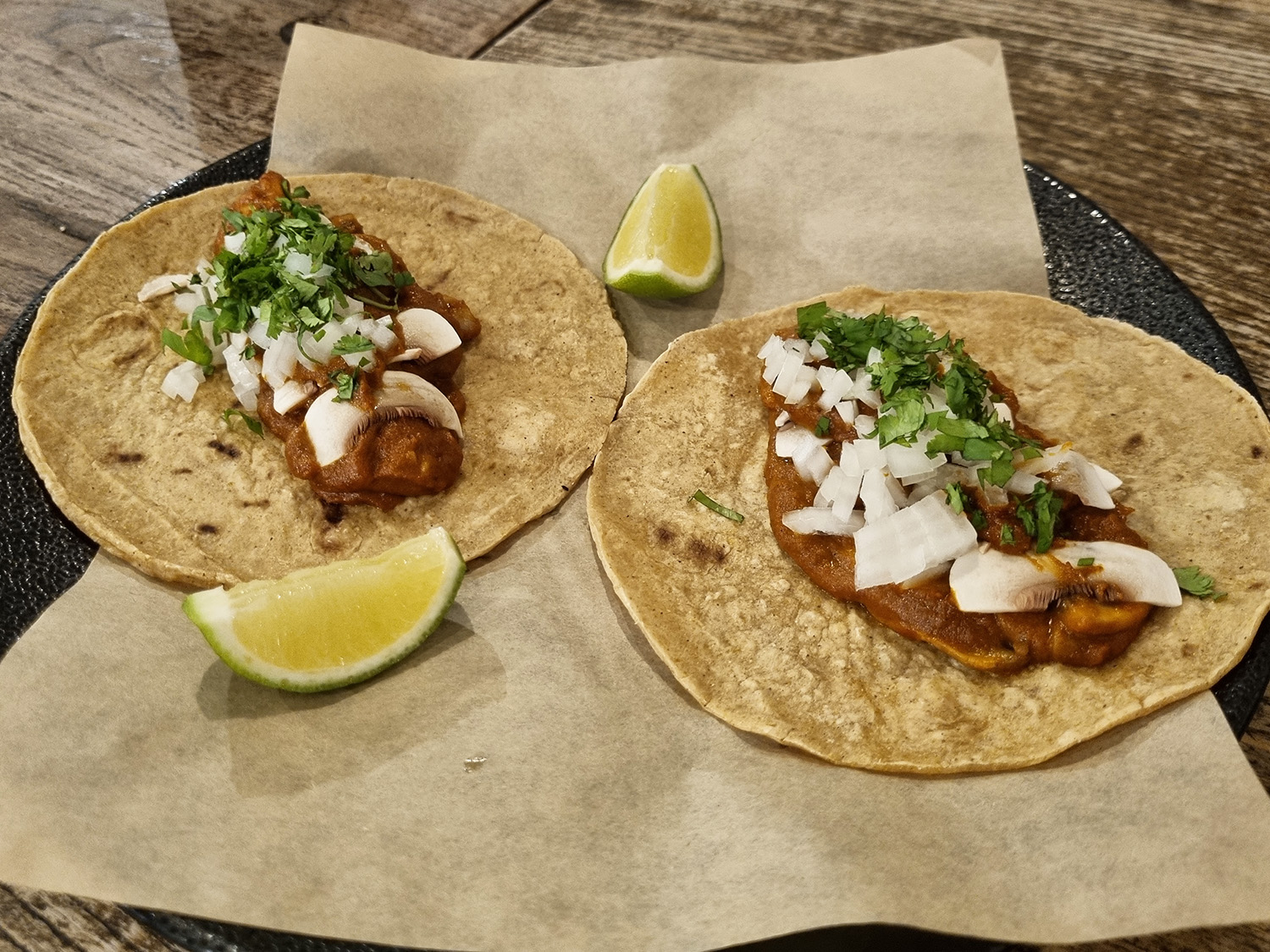 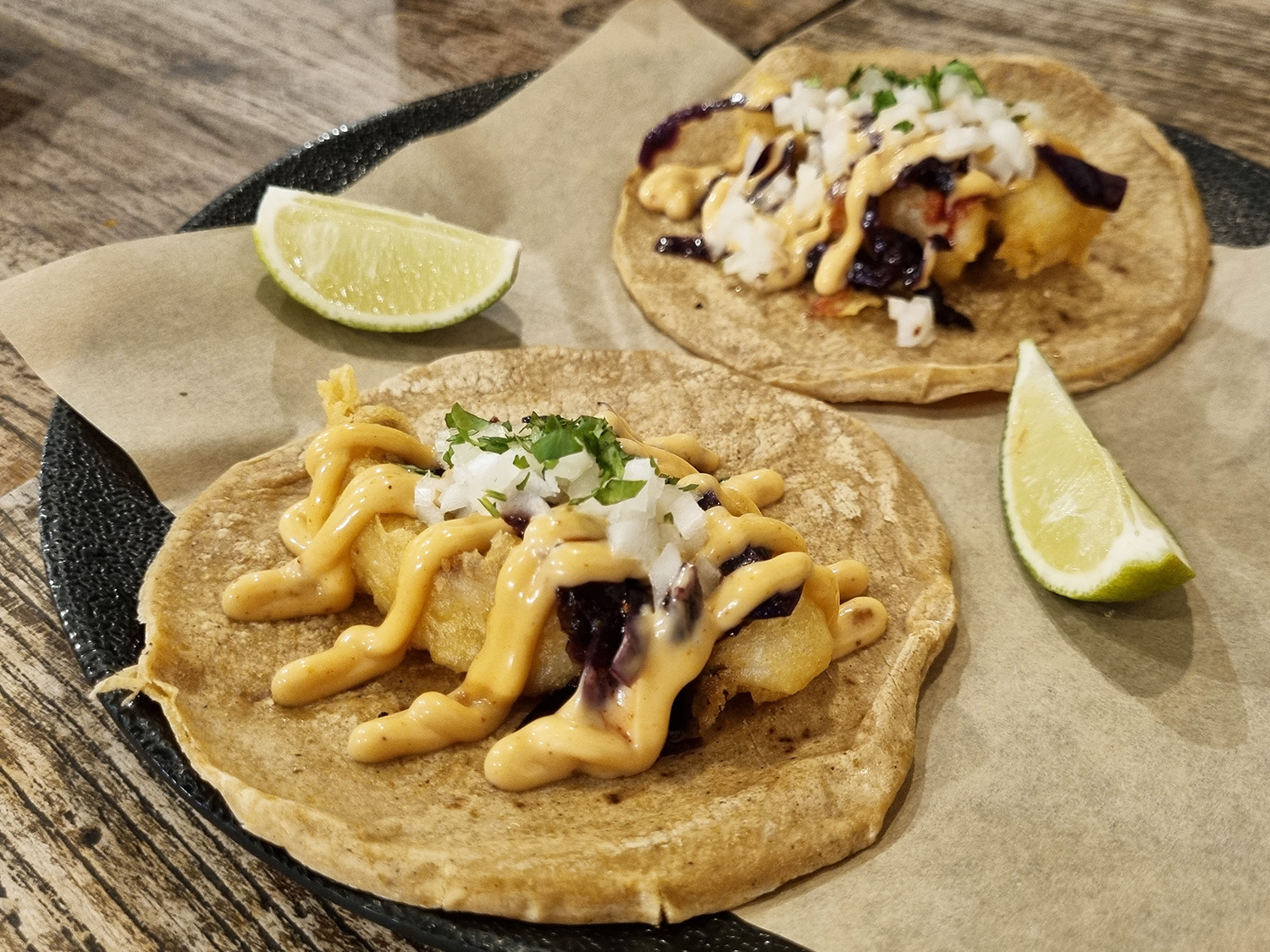 Next we move on to seafood and Ensenada Style(ish) Fish Tacos, morsels of crispy battered white fish joined by kimchi and a chipotle mayo. If you’ve tried proper fish tacos before you’ll know they’re pretty special, but that spicy, tangy kimchi cabbage really sends these overboard.

Following that though it’s the star of the show for me, and the bite that transports me straight back to the unique buzz of a Mexican food stall – Pork Carnitas Campechano. Super slow-cooked cuts of pig snuggled together with Sobrassada, a spicy Spanish sausage similar to chorizo, and crisp pieces of pork crackling. If you needed to send a taco into space to show some aliens what all the fuss was about, my vote goes for these guys. 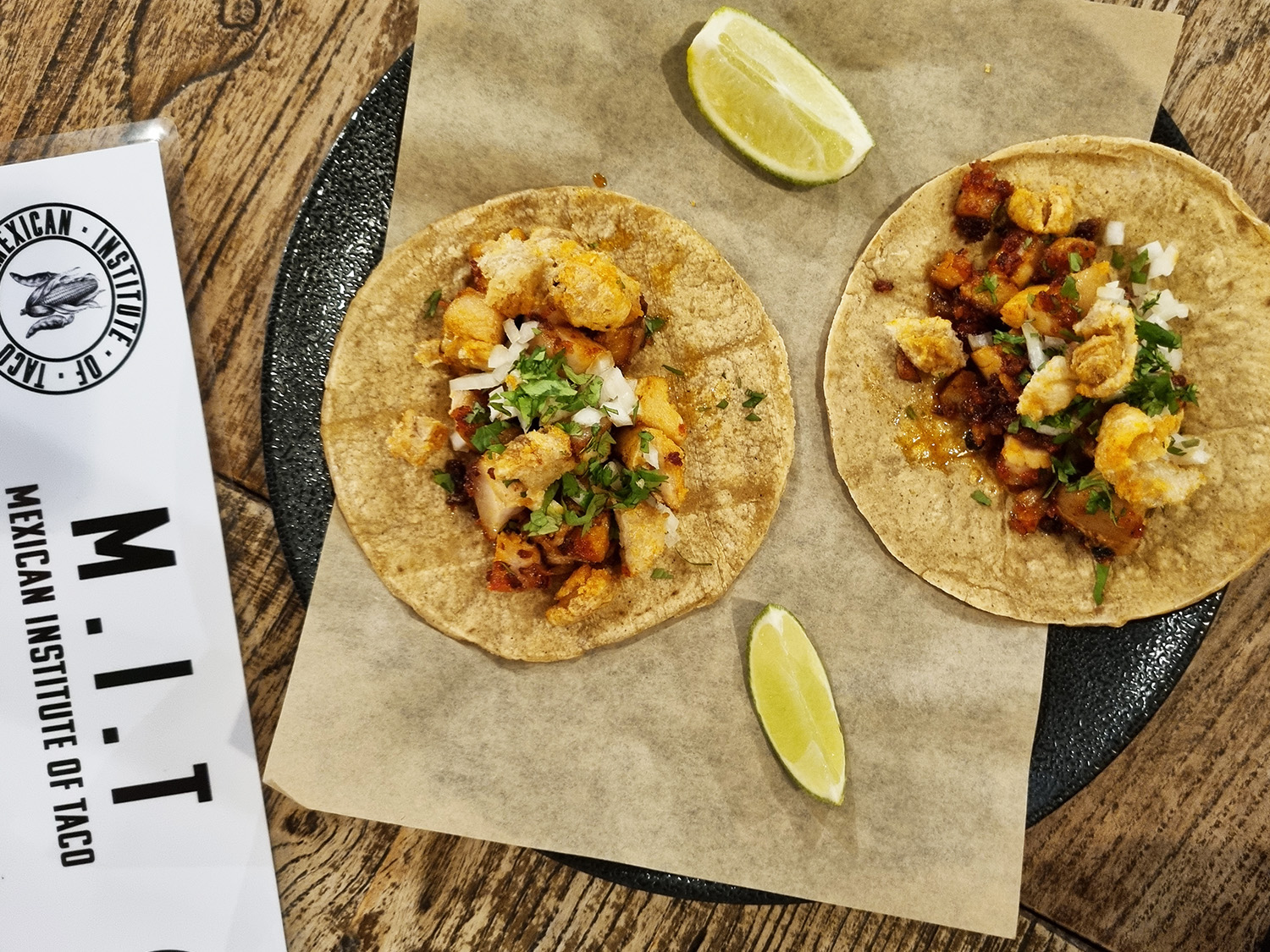 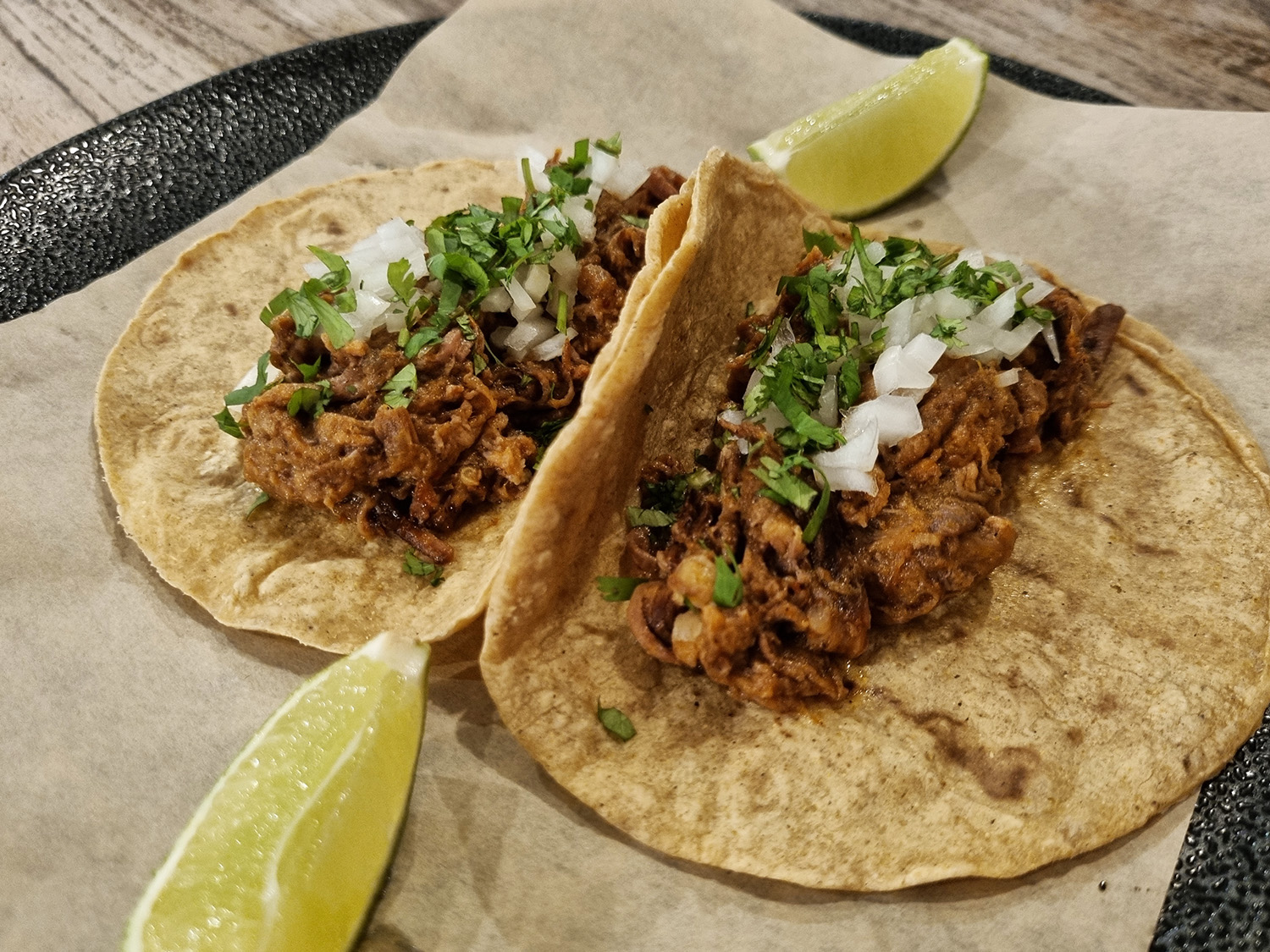 The carnivorous delights don’t end there either, Beef Birria, a dish which has been on everyone’s lips the last 12 months lands on our table. This lovingly braised then shredded brisket is moist, meaty and perfectly spiced, another must-try. Tacos de Alambre, a fajita style tacos of beef, onions and peppers marinated in Worcestershire sauce for sweet richness certainly deserve your attention too. 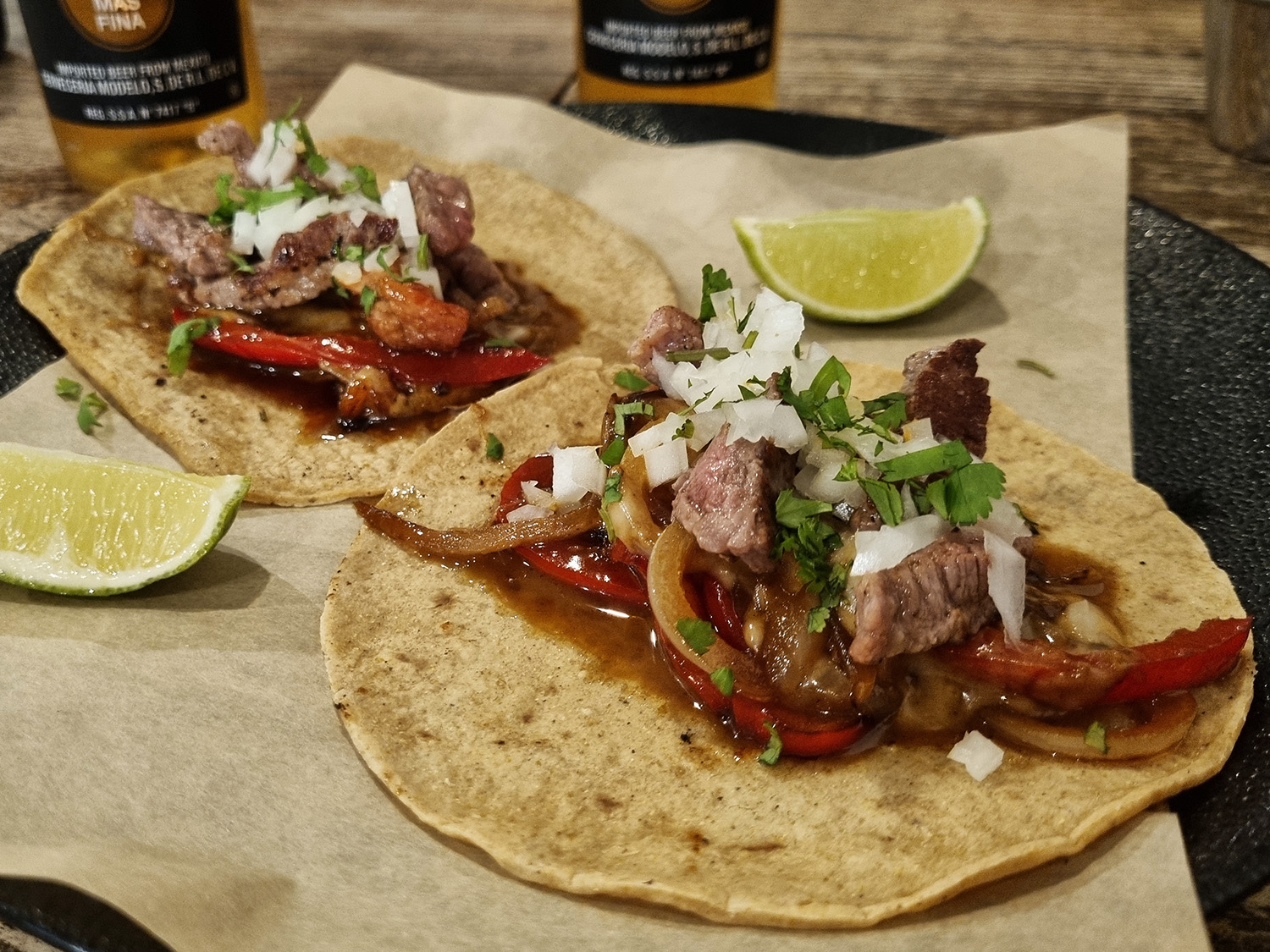 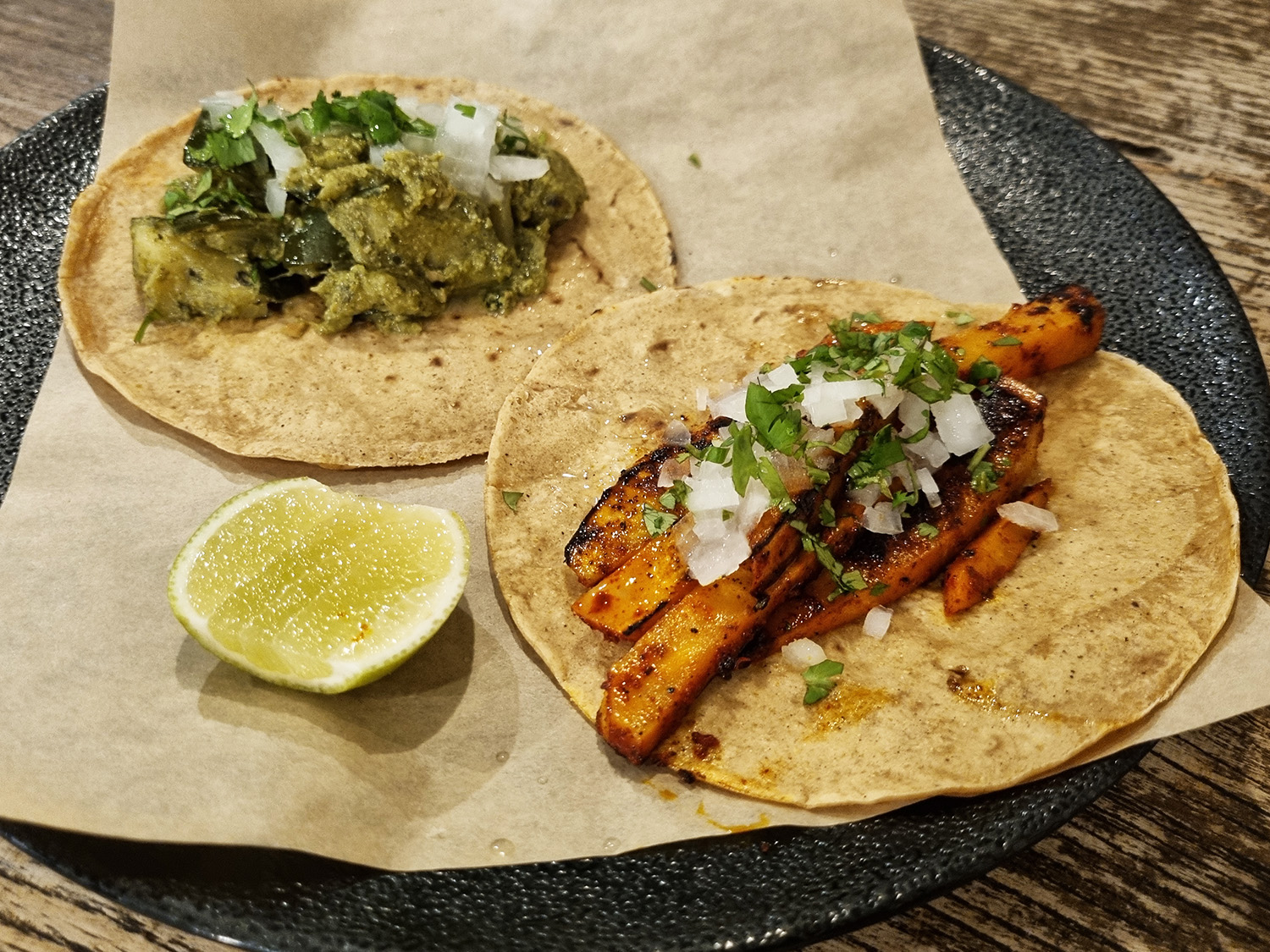 Vegans and veggies won’t go hungry either mind. Enjoy Celeriac Pibil, where spiced shards of root veg do a good rendition of the pork tacos famous around the Yucatan peninsula. Equally delicious is the Courgette Pipian, a green mole sauce made with pumpkin seeds and a whole dose of complexity.

Finally we munch into those messy Tacos Dorados, deep fried chutes of crispy corn tortilla packed with shredded chicken then crowned by sour cream, iceberg lettuce tomato and onion. They’re oh-so worth getting grubby for. 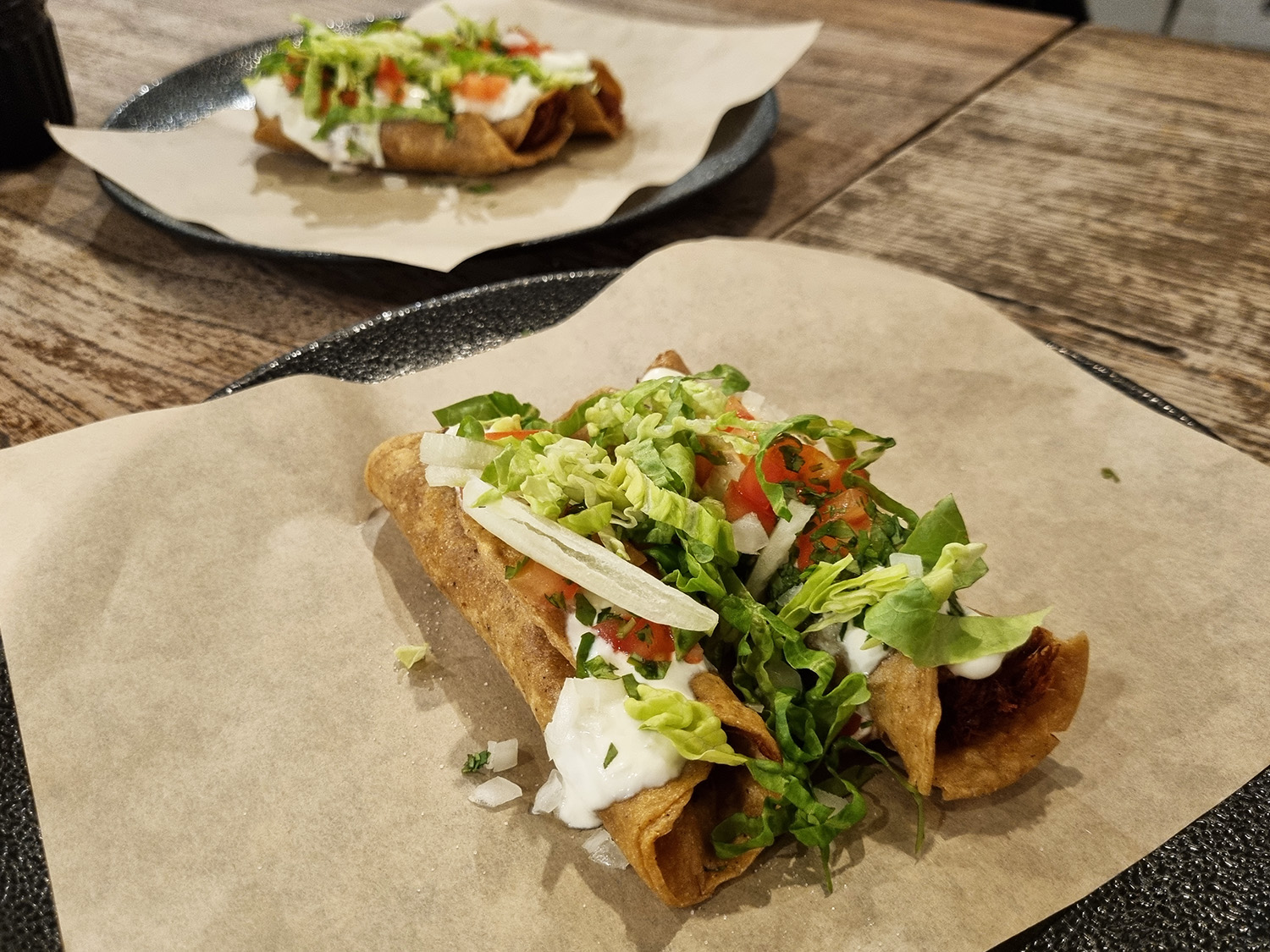 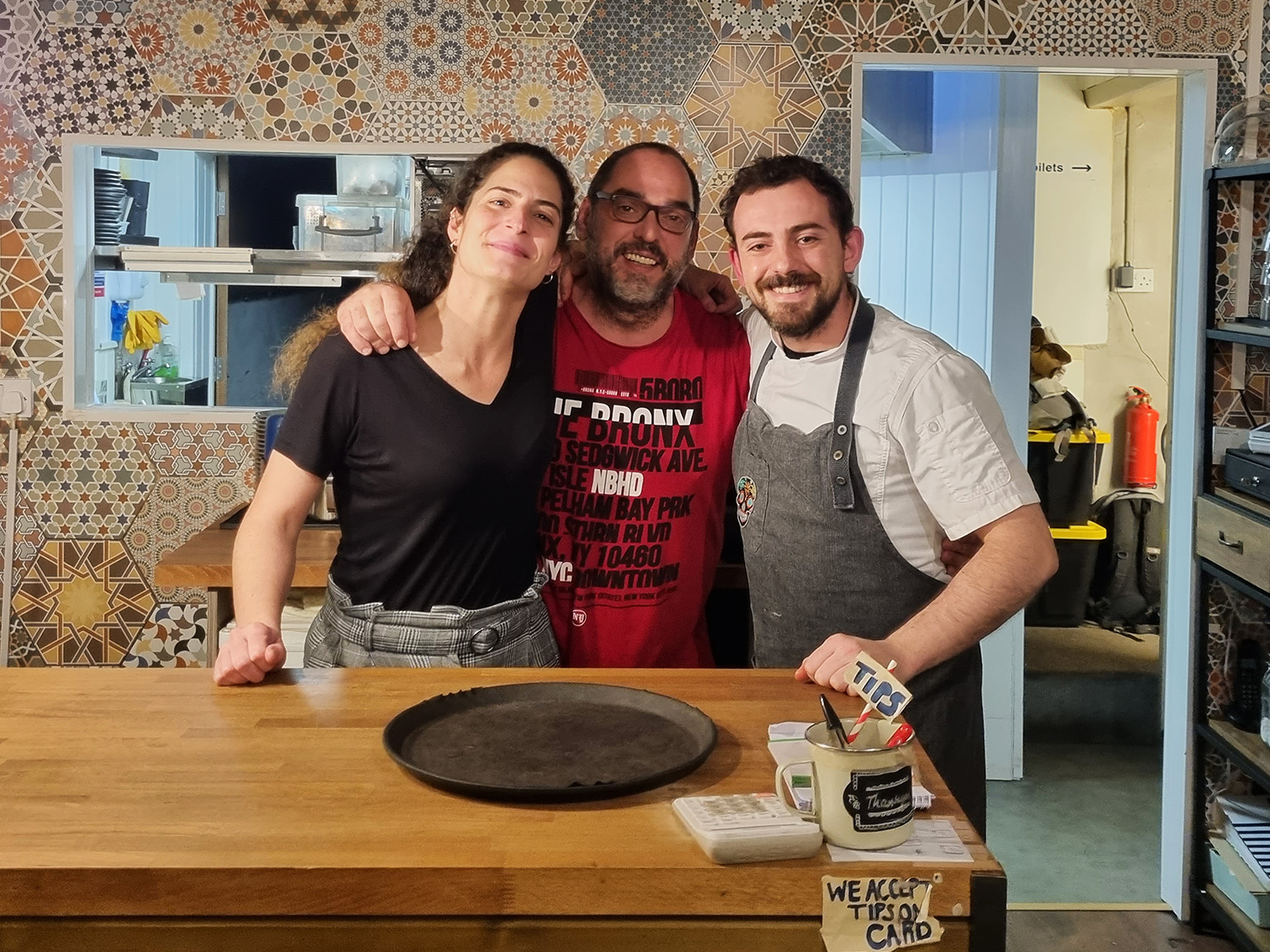 After a couple of months travelling the length of breadth of Mexico a few years back I’m pretty hooked on tacos. Constantly searching for that high you only get from the good stuff which, truth be told, isn’t always so easy to find here in the UK. Take it from me, and the many Mexicans who’ve been finding their way to this secluded little place, you can get it good here.

Book yourself a table soon at MIT as it’s only set to be running out of Junipers for another few weeks until the team will be looking to set up at a new venue.