Manchester’s Finest do The Crystal Maze

We headed down to The Crystal Maze Live Experience this week for our Christmas party. I should say now that I managed to get 3 crystals.

I’m in a small room, with a large table in its centre. On the table are a vast array of overturned cups of varying sizes, shapes and decoration.

Although you may be inclined to believe I’ve just walked into the bit at the end of Indiana Jones and the Last Crusade – one of these cups is not the Holy Grail but in fact is being used to hide a particularly shiny, kiwi-sized crystal.

If I pick the right cup I get to keep it, if not – I’m locked in and lose one. That’s right – I’ve only gone and found myself in the bloody Crystal Maze (cue theme tune).

Located in the old Granada Studios, the Crystal Maze Live Experience offers visitors the chance to re-live the classic TV show with 4 amazingly designed zones offering 4 types of challenge in which to collect crystals.

All of this culminates in the Crystal Dome; your chance to grab and collect little plastic strips of shiny gold – the more strips you get – the higher up the leader board you will be. Simples. Since starting in London in 2015, thousands of Southerners have passed through the famous zones – and now it’s our turn to show them how to do it properly.

I’m not sure anyone can talk about the Crystal Maze without mentioning old baldy-bald bloke Richard O’Brien. Some of my favourite memories as a kid were watching him talk absolute shite to the camera while jumping about like a 10 year old after too many Mr Freezes. All the while a bloke called Kevin from Stoke was on all fours in a tiny room; his mates shouting at him to turn the fuck around and get the crystal before this bald bugger locks him in.

Richard O’Brien WAS the Crystal Maze, and so as it opens its doors to the paying Manc public – I was a little apprehensive as to whether the magic would still be there.

Yes, we’d all seen the TV show. Yes, we all knew the zones and the types of games. But would this be an impressive recreation of our childhood memories, or a quick, cheap cash-grab with crappy props, crudely painted zones and boring games?

I’m pleased to say that as our ‘host’ emerged through a door to greet us these fears were quickly allayed and were replaced by excited girly shouts of glee.

After a quick pep talk and a spattering of motivational slogans we were ready to go and as soon as we stepped into the Medieval zone it was already too late – we were actually enjoying ourselves.

At this point I should say that the production values of each game and zone were fantastic. There has definitely been lots of money and lots of attention poured into the games and the set design, with amazing attention to detail from the flickering candles in the Medieval zone, right up to the burlap cloth window covers in the Aztec zone.

The games themselves were completely brilliant too – these weren’t just crosswords or escape rooms, there was a dazzling array of tasks and dangers in each one – and when you’re in one – things are nowhere near as easy as it looks on the telly.

I think it’s unfair for me to start reeling off the different games that we played, it’s much better if you go in there ‘blind’ but you can expect puzzles, lasers, robots, slides, pulleys, balls and spikes galore.

Right. The elephant in the room. The little sparrow lightly pecking at the back of your head. The other animal metaphor that I can’t remember or be bothered making up. The price.

The amount of English pounds it takes to get you into the maze varies wildly. In the simplest terms prices start at £29.99 per person, though this can fluctuate wildly depending on the day, time and how many people you’re bringing along.

It’s a lot of bunce. You can buy 48 packs of forty stickers for that. Or two drinks in the Northern Quarter. But if I only get one thing across in this review it’s this – I would definitely say that it is well worth the money.

As a notoriously tight bugger, I was initially sceptical – however when we came out, after winning 11 crystals, we just could not stop talking about how much of a good time we had – the amount of nostalgia and fun that the place invoked within us was worth much more than the entrance price.

We are all still talking about it this week – and recommending anyone who is stupid enough to get caught talking to us to go. It’s not in Manchester forever, so I suggest you get yourself down there as soon as possible. Good Luck! 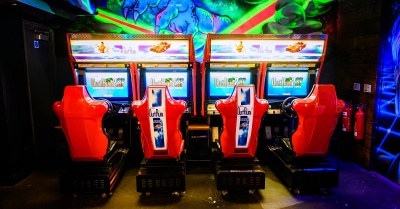