Off The Square will become the new hub in the NQ hosting everything from live music and club nights to yoga and vintage fairs.

The Northern Quarter is everybody’s favourite place to see new and upcoming musical acts and rightfully so. It’s the place you can see any band before they get famous.

It’s home to some of the cities oldest venues such as Night and Day, famous for being one of the first venues anyone who is someone has played. You just have to see the wall in the dressing room to recognise a fair few names scribbled across the wall.

There’s also plenty of newer (ish) ones such as Whiskey Jar, home to the ultimate acoustic night in town.

Well, being that it is Manchester and one of the biggest music capitals in the city, it’s about time the NQ got a new venue.

Opening on Saturday 14th September is the newest independent music venue, Off The Square. I’ll pause for a sec while you figure out where it is.

Yup, just off Stevenson Square, on Lever Street, Off The Square is taking over an old listed building and turning it into an impressive industrial space with commissioned artwork from graffiti artist, Andrew David Parle.

Of course, it’s not just music the venue will be hosting. The place promised to reflect the diversity of the city, so you bet there is plenty of lifestyle events such as yoga, nights hosted strictly by Female DJs to poetry nights and vintage fairs.

The opening night is filled with house, funk, disco and live percussion and promises to be a massive part until the early hours. What’s more, it’s free entry so you really have no excuse to miss out on it.

Off The Square – Launch party 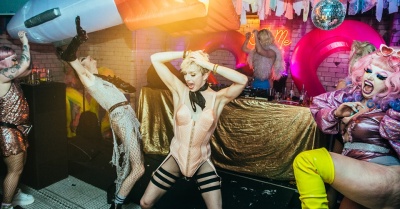