Pomona Island: From a Palace to a Nightclub on a Ship and then... forgotten!

It may seem like a manky bit of wasteland nowadays, but there's an impressive history to be found... 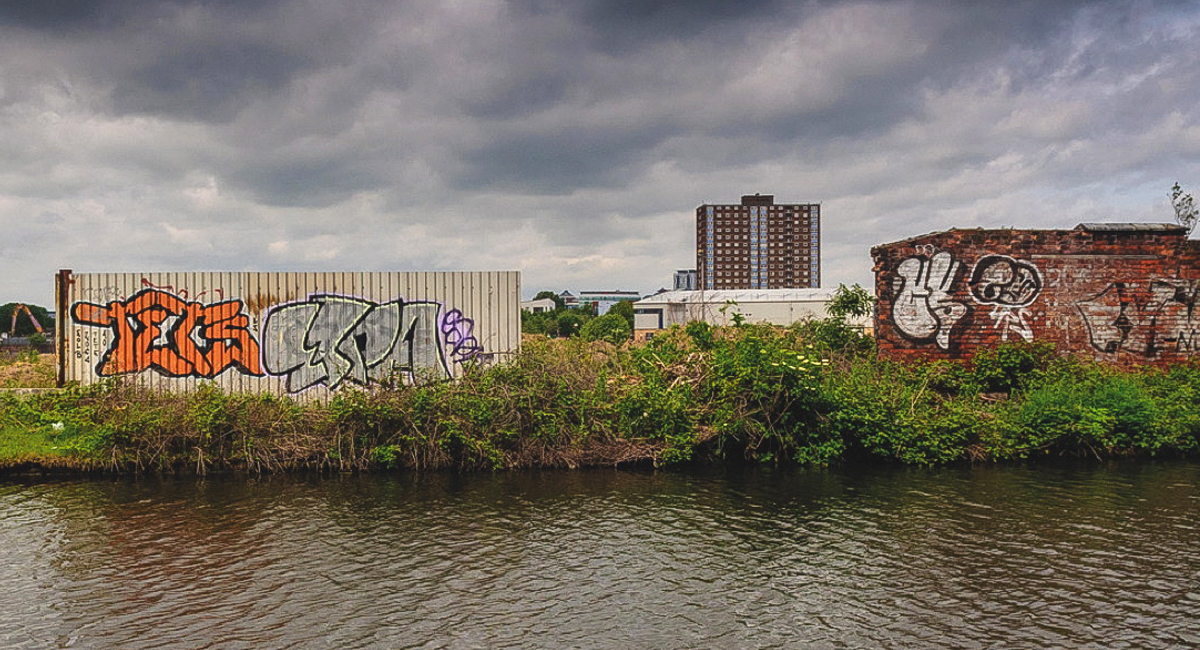 I was watching a little Manchester-based TV show on 4OD this week and it got me thinking about the locations that they used and why they did it.

It’s called ‘No Offence’ and it’s actually pretty good. Basically, in the first episode they find a body in what can only be described as a ‘desolate, run-down, industrial shit hole’ that has a body of water nearby (for the victim to wash up in) and generally looks depressing and horrible.

Years of dereliction, post-industrial decline and just seemingly forgotten, Pomona Island is only really known nowadays as the scene of a horrific fake murder, a tram stop and the odd ‘secret’ all-nighter party that benefits from the fact that nobody lives anywhere near it and cares about the noise. 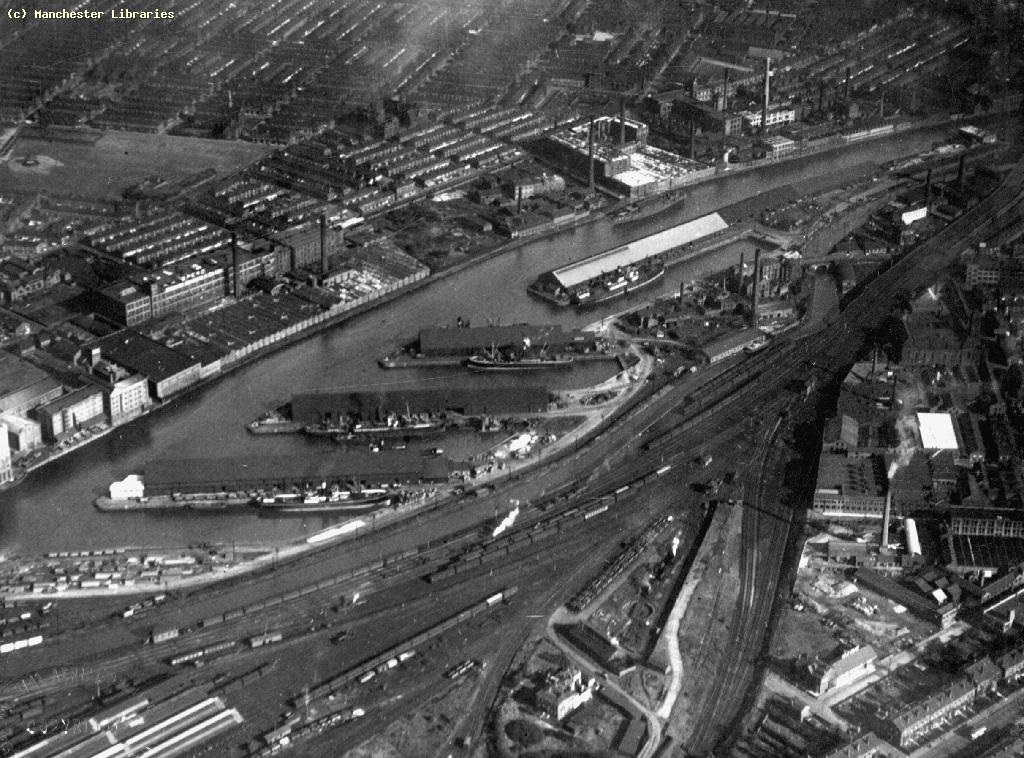 But a quick flick through the history pages reveal Pomona Island to have once been home to some truly beautiful gardens, a HUGE ‘palace’, and even Manchester’s first (and only) nightclub on a ship! Not bad for a manky bit of concrete on the way to Trafford.

I’m going to transport you all the way back to 1845 now when a couple of fellas, brothers in fact, decided they wanted to make a bit of money out of the city’s leisure industry. By this point in time the city centre itself was massively overcrowded, dirty, polluted and probably stunk to high heaven.

So, the Cornbrook brothers created ‘Strawberry Gardens‘, an idyllic escape just south of the city centre, filled to the brim with flowers, gardens and activities. The name was later changed to ‘Pomona Gardens’ after the Roman goddess of fruit and a true leisure destination was born. 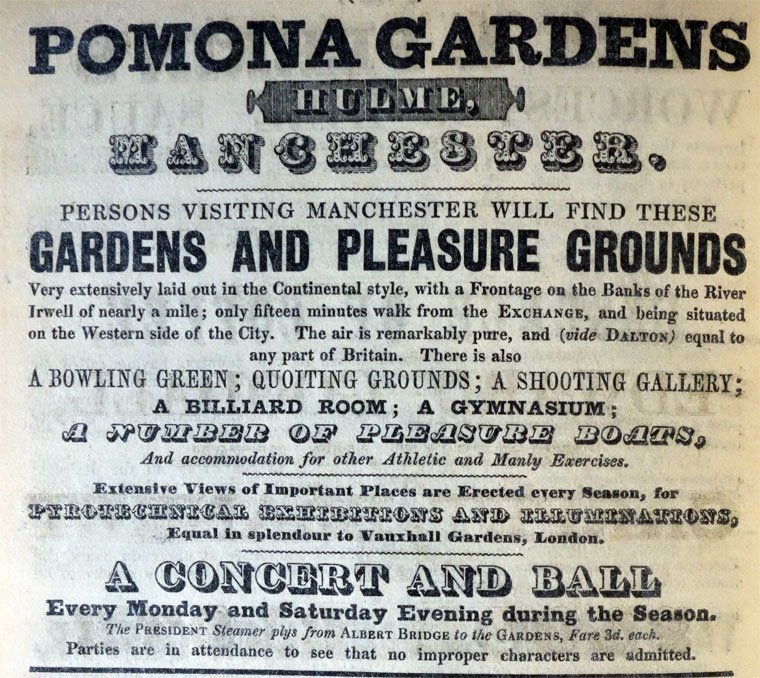 Marketed as “the countryside without the need for a train journey“, Pomona Gardens had an impressive range of amusements and activities that would send the Victorians into a frenzy, including archery, billiards, a shooting gallery and even a hedge maze – all set in some truly beautiful surroundings.

In its first year of being open, a whopping 100,000 people flocked to Pomona, likely drawn there by the promise of nature, clean air and a rest from the trials and graft of working life.

The success of the gardens alerted a local businessman – James Reilly to the cause, who felt that there was more to be done, more money to be made and wanted in. So in 1868 he bought the gardens for a whopping £75,000 – just over £1m in today’s money. 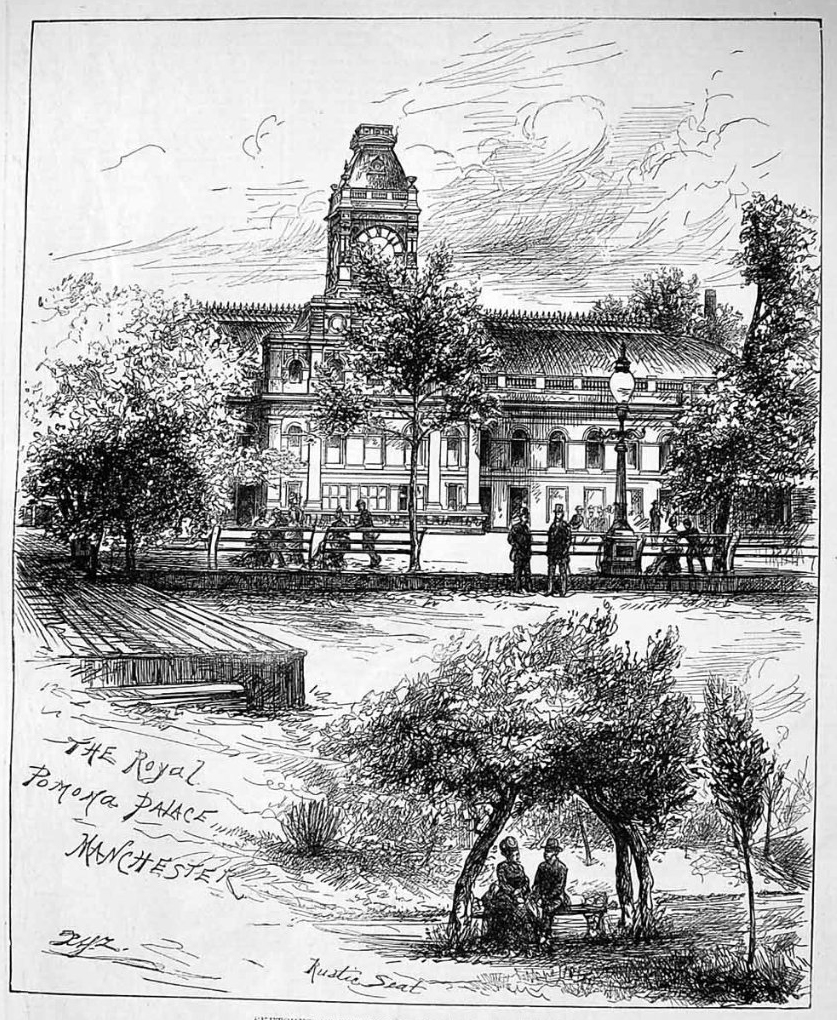 His plan was a daring and ambitious one. He wanted to create a large indoor space on Pomona Island, to combat the Manchester rain and therefore – make himself more money. So he went about building the Royal Pomona Palace, which opened in 1875. 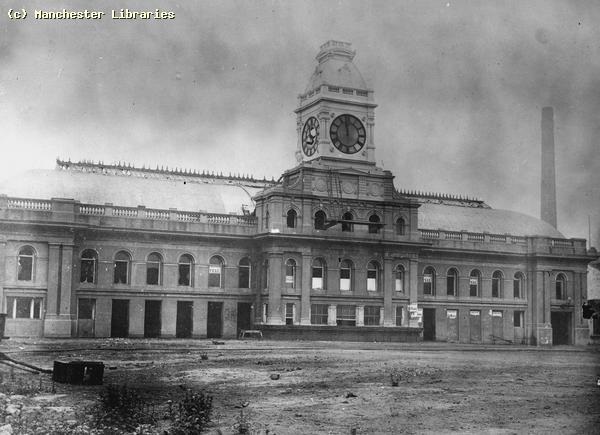 At the time, the Palace was the biggest concert hall in the country, seating up to 30,000 people inside and featuring a 100ft high clock tower right in the centre. It was a truly magnificent spectacle, with people travelling far and wide to come and visit and explore the myriad of ‘exotic’ exhibitions. 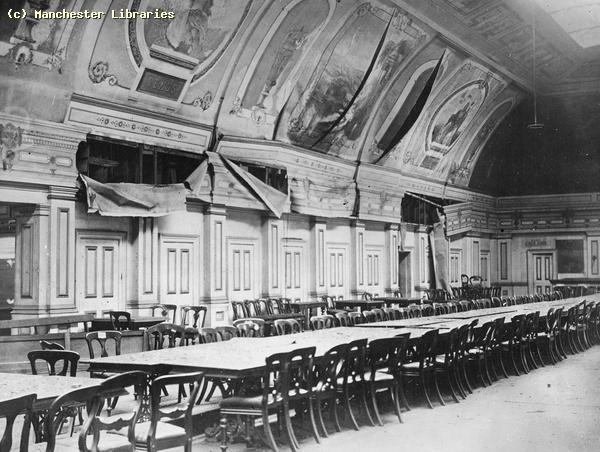 There’d be animals, souvenirs, and sadly – humans from far-flung tribes all displayed here for people to gawk at – but the success of the Palace was relatively short lived. By the time of its closure in 1887, the Palace had been losing customers to another local attraction – the zoo at Belle Vue and was struggling to compete.

The closure of the Palace wasn’t because of that though. Oh no. It was in fact forced to close after becoming badly damaged in a massive explosion at a nearby chemicals factory – thus rendering the whole structure and its surrounding gardens useless.

What followed was around 85 years of relative neglect in the area, although it was primarily used as docklands serving the Manchester Ship Canal. These were subsequently closed in the 1970s (along with the decline in most of the traffic down the canal). 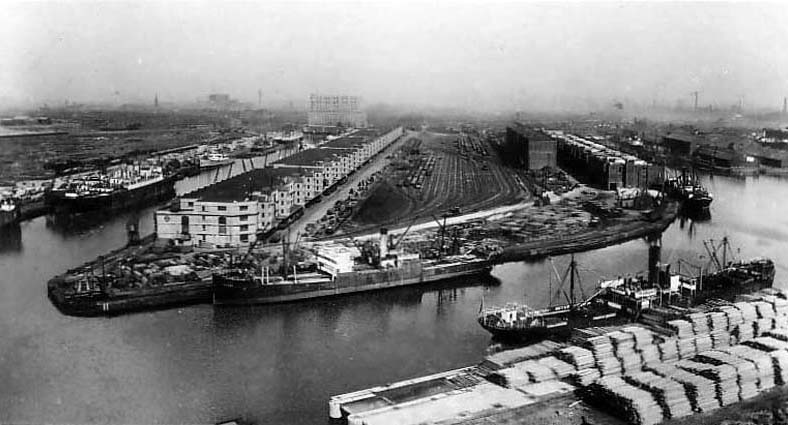 Around the mid-70s though, some bright spark decided that they wanted to bring a bit of pizzazz and glamour back to Pomona, deeming it the perfect place to create Manchester’s first ever night club on a ship!

Not only was this the first ever club on a ship – it was also the last (unless you count those barges that you can hire – which I don’t). 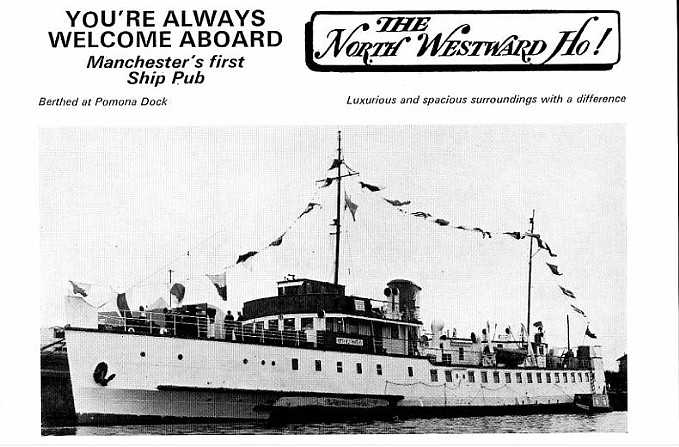 The genius behind the project was Jud Evans, who was granted permission to turn a ship into a boozer and so bought one in Cornwall and sailed it up North, down the Ship Canal and moored it up at Pomona Island.

After an expensive 12-month refit, the North Westward Ho! ‘Pubship’ was opened, featuring six bars, a restaurant, a late licence and a disco. In fact, it was so popular at the time that Jud decided to buy a plane off the RAF and park it up next door – further adding another restaurant and dancefloor to it all.

Unfortunately for Jud, and the dancing public of Manchester, the ‘Pubship’ was short-lived, closing for good in 1981. This, once again, left Pomona derelict, neglected and overgrown. And it’s been that way ever since. 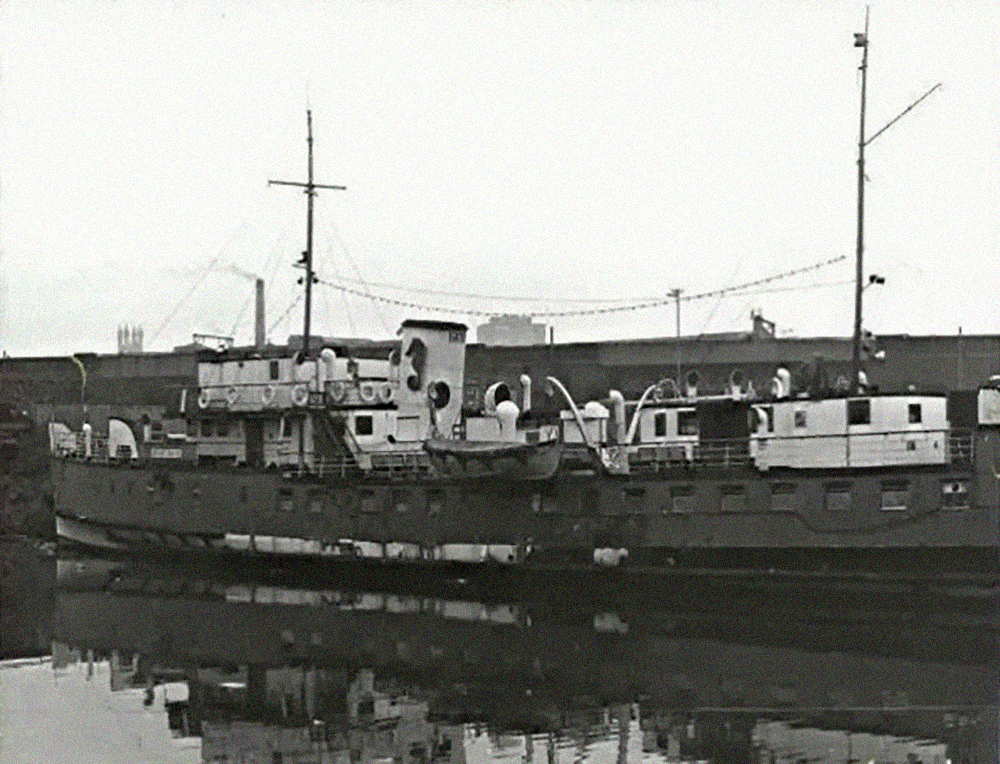 40 years have gone by and nothing of note has happened in the area, except that they’ve managed to get themselves a tram stop. Oh, and the area itself has become synonymous over the years as the location of many illegal raves and parties – due to how remote it is and also the cover afforded by the new tram lines.

There have been mutterings for years about renovation and developments in the area and there has even been the recent ‘Pomona Wharf’ development pop up at the north end of the area. There’s also the proposed ‘Manchester Waters‘ development which promises 742 homes across five residential towers. 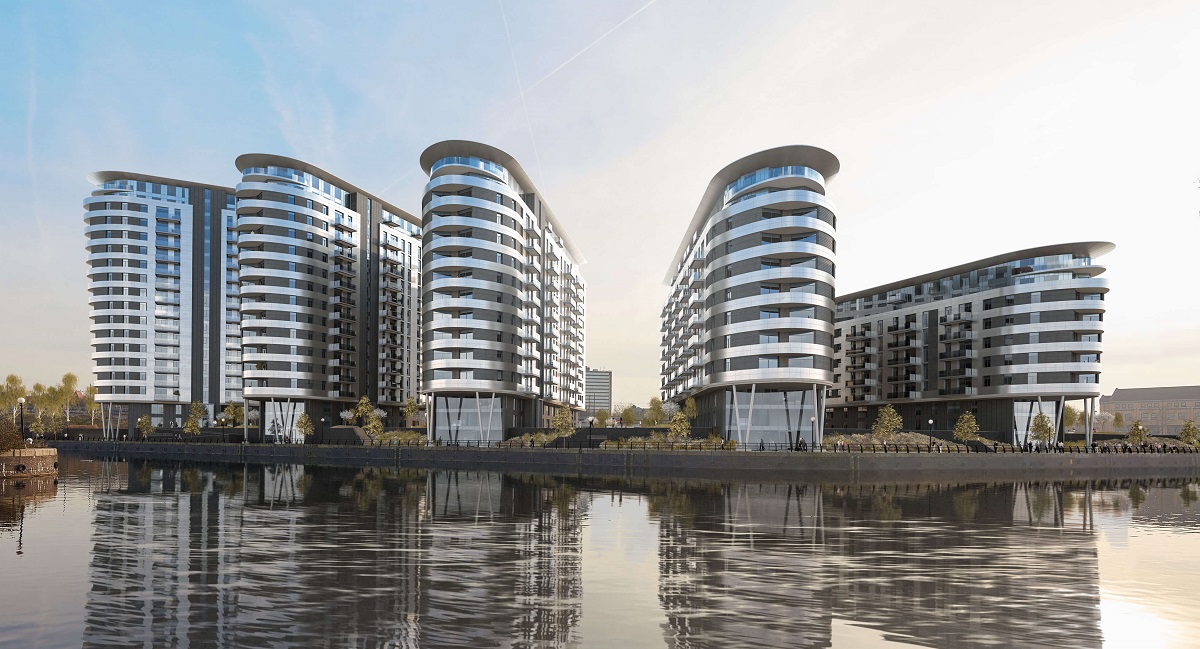 So it’s clear that there’s set to be some major movement in Pomona over the next few years, with a location that’s equidistant between MediaCity and the centre – and a rich history in which to bask in (while presumably sipping expensive wine on your balcony).

Whatever happens, it’ll be much better than what’s currently there – and has been for over 100 years. Personally though – I’ll miss the raves – suppose someone will have to find another secluded spot somewhere.

Lightopia will STILL light up Manchester this Christmas