Rocket Ships, Bugs Bunny & The Batmobile: What Happened to the Warner Bros. Store?

I know it's just a shop but really - this was never JUST a shop... 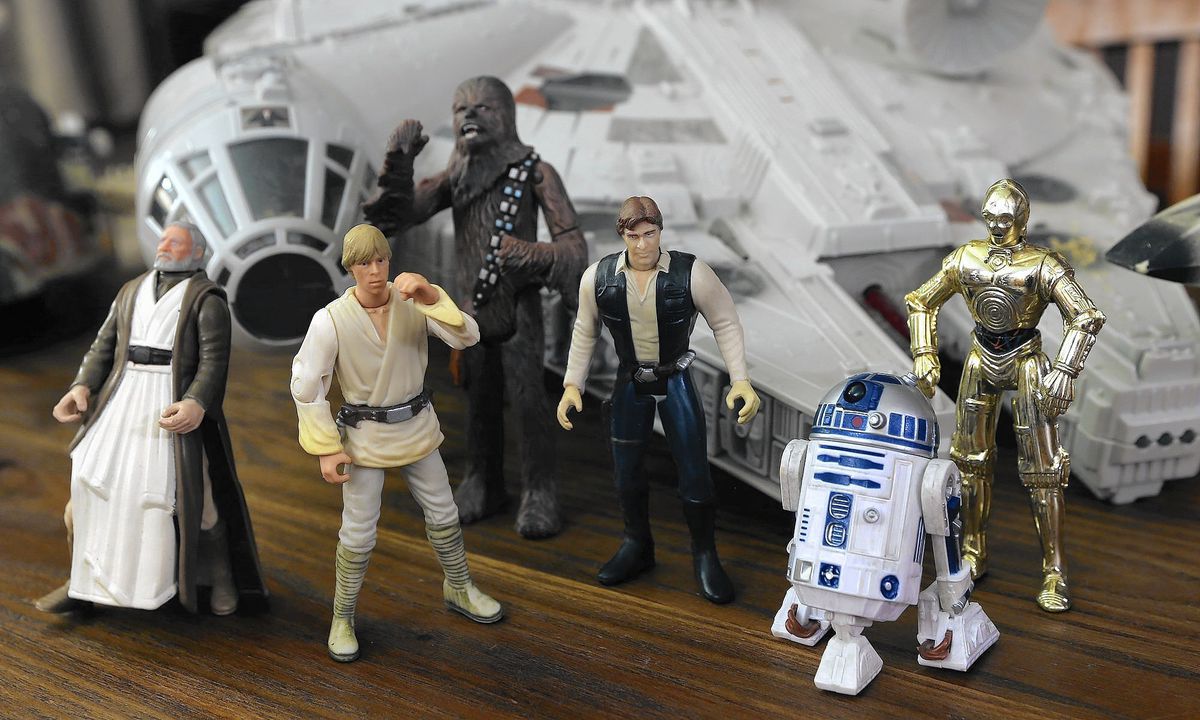 As a fully formed adult, if I want to go into a toy shop and buy a Star Wars figure I can. I can even go into Build-A-Bear and spend £30 creating my very own cuddly Pikachu to sit on my bed and say “Pika” every time I squeeze him before sleepy times.

As a kid though, with 50p a week for pocket money, I couldn’t do any of those things.

The best I could do was nip to the local offy and get some toffees, and even though 50p could get you a chocolate bar, a can of coke, a quarter or Choccy Nibs and a 10p Mix in those days – it really wasn’t enough. 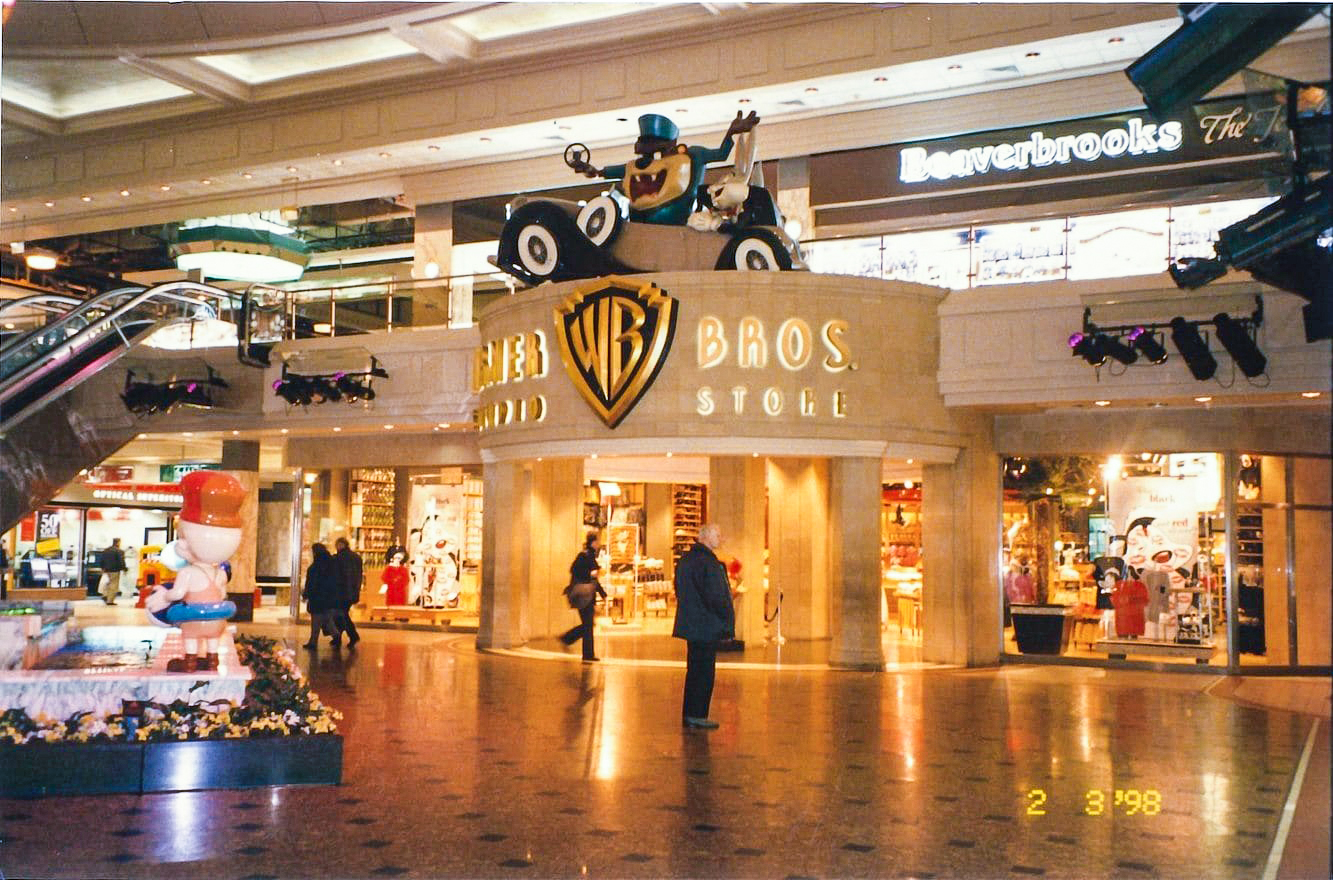 Nowadays I see kids knocking about in Didsbury and Chorlton and they’ve got their own iPad (which I don’t even have) and they have loads of toys and they’re sat eating Hummus and Moussaka – both of which I didn’t even know existed until I was about 22.

Back in the 90s it was a VERY different world. Maybe that’s why people were so impressed and bowled over by a shop in the Arndale Centre – although it was never just ANY shop – this was the Warner Bros. Store! 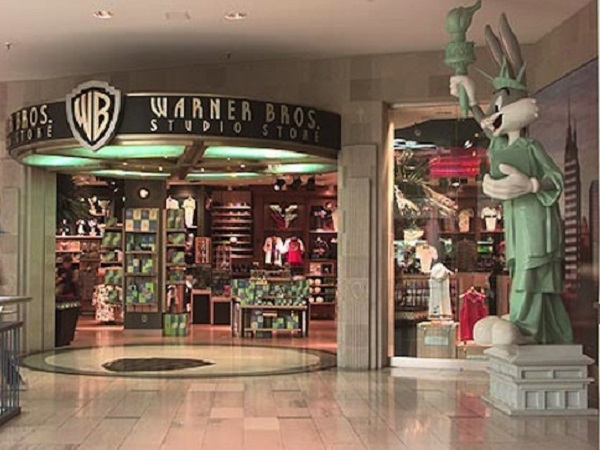 Warner Bros. Stores infiltrated malls all over the world.

When it opened in 1993 it was one of the biggest things to happen in the city – as Manchester was chosen for the site of the first UK Warner Bros. Store, and they certainly didn’t scrimp or save on the whole experience.

The bit I remember the most, primarily because we hardly ever actually went inside the shop because it was too expensive, is the Batmobile and Bat Cave diorama, which you could see as you walked along. Based on the recently released Batman Returns Batmobile, even though it was only like 3/4 sized – it was a truly wonderous sight to behold for anyone under the age of 15. 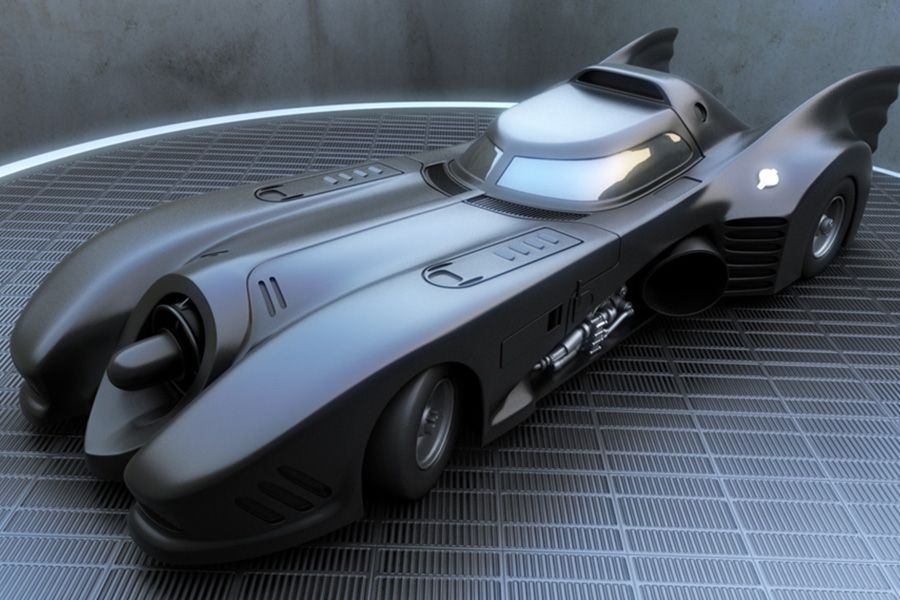 There are zero images of the Batman bit. So here’s a picture of the Batmobile

There was also a huge Tasmanian Devil & Bugs Bunny statue above the entrance. Taz was wearing a top hat for some reason, while Bugs was in the passenger seat of a 1920s car.

Quite where they’d both been in the car, perhaps to a party somewhere and Taz was the designated driver – I don’t know. Nobody cared too much though really – we were just happy to have it in our local shopping centre.

In preparation for the arrival of the ‘Studio Store’, the Arndale spent several million pounds refurbishing the centre, hoping that the arrival of Warner Brothers would boost its image, grab customer’s attention and move the whole experience away from shopping being functional and dull. 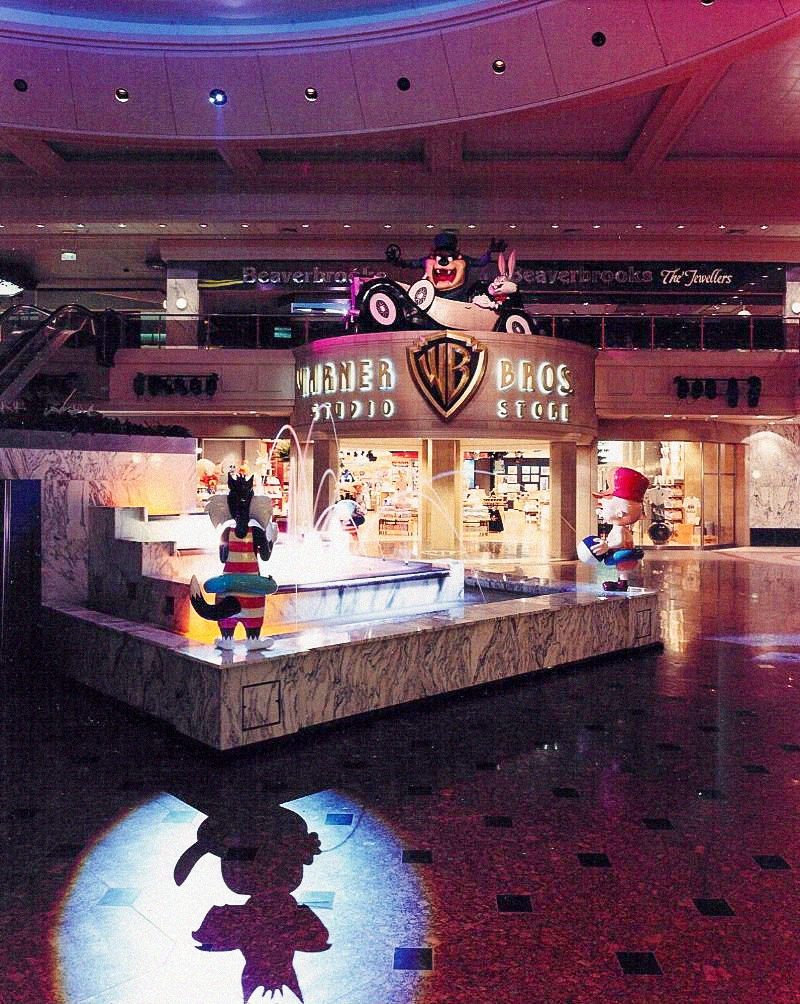 So, they propped up the giant Warner characters outside, rigged up the Bat Cave and spend a ton of cash on projectors and lighting for the entrance. There was even a frequent water show held in the fountain outside the shop – one which included Bugs Bunny, Daffy Duck and any random kids that decided they wanted to reach into the water to grab a 50 pence piece.

The store itself was designed to look like a Hollywood studio back lot and once inside, there were even more gimmicks and games to be played, alongside the massive range of t-shirts, cuddly toys and other WB memorabilia. 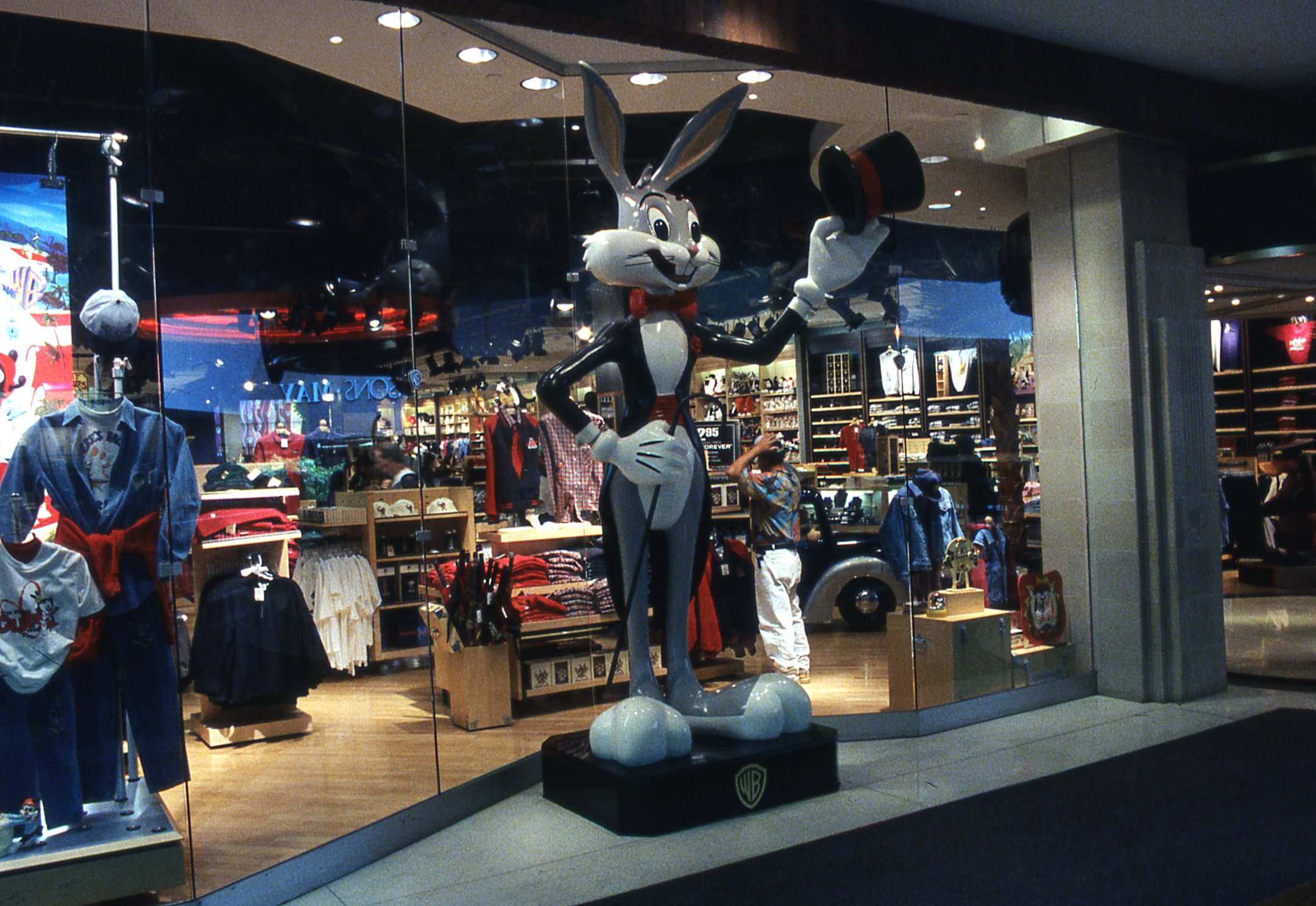 Dead behind the eyes.

One of the big draws for people was the inclusion of a kind of Art Gallery in the store, one which featured artwork from the various Warner Bros. cartoons. Although they were pretty pricey – meaning probably only about 3 people ever bought one – it was a great little feature and getting to see some one-of-a-kind art was pretty special.

I seem to remember there was a rocket at the back of the shop – which had something to do with Marvin the Martian and I used to piss about on a bunch of painting programs on the touch-screen panels – something which was highly innovative and technological at the time. 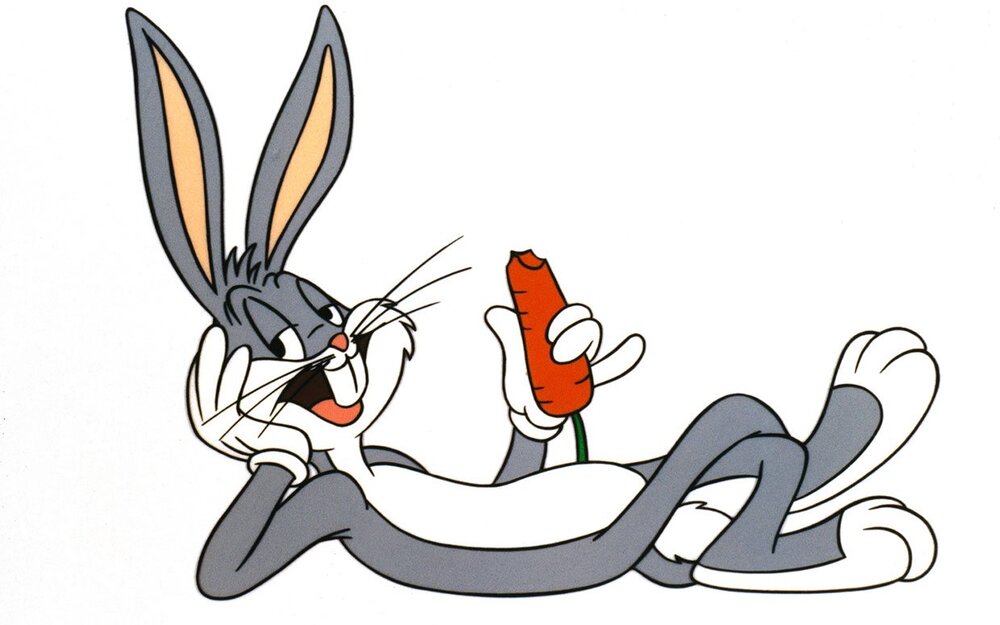 I never really got Bugs Bunny. He’s a bit of a knob.

I’m struggling to remember much else about the place, except buying a Taz plastic tumbler for my orange squash one time. Yep, that’s it.

I’ve also recently discovered that in an effort to instill a certain high level of service with their Mancunian staff, Warner Bros. flew a host of US managers over from their stores in LA and New York to make the whole experience better. They certainly weren’t messing about with this one.

Warner Bros. have never released the financial details of their stores throughout their 10-year reign on the high street, however it’s clear that they were exceptionally successful in early years, but sales dropped off considerably towards the end. 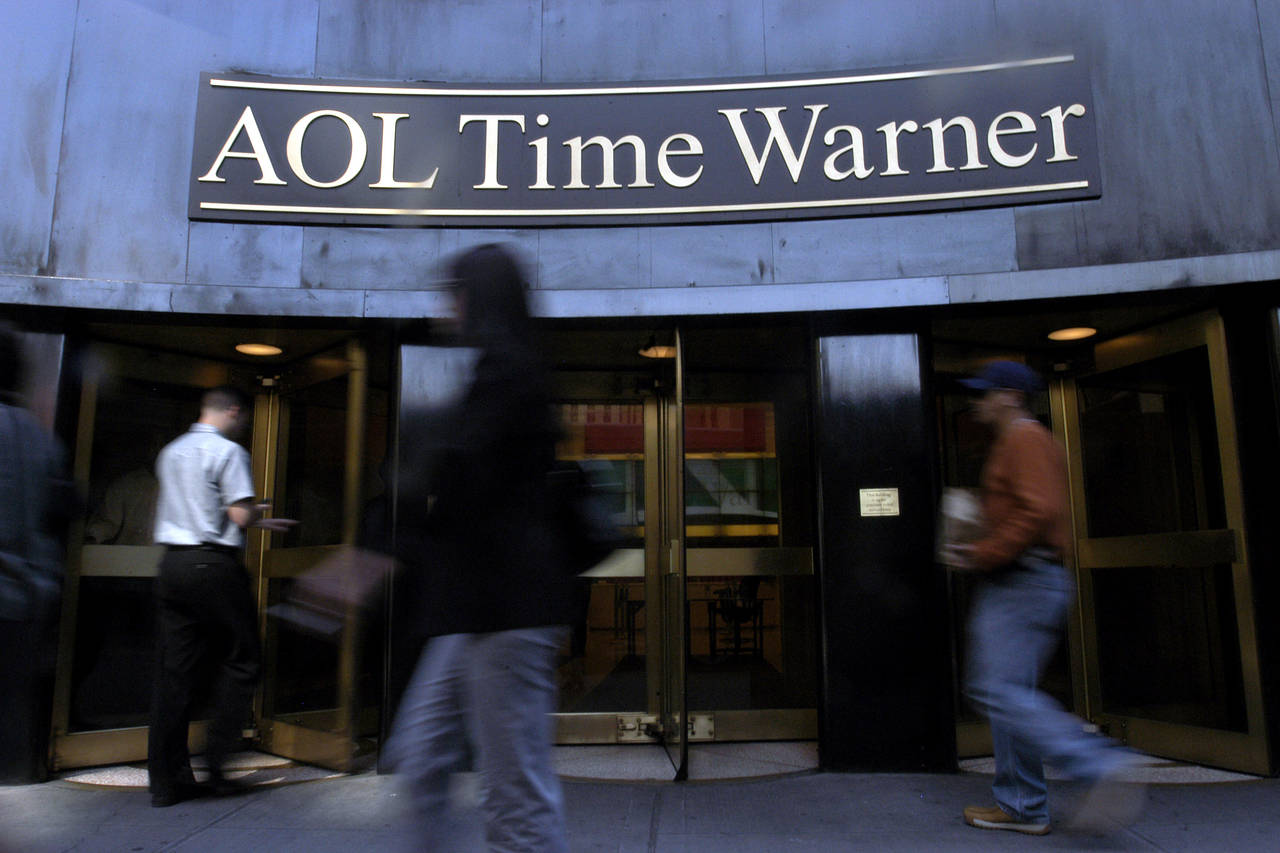 AOL Time Warner. Not the best merger ever to be honest.

Many argue that stale merchandise and a shrinking retail market doomed the stores back in 2000, which was later used as an excuse by executives to pull the plug on what was deemed “a retail distraction.”

Back in January 2001, Warner merged with AOL, who most people will remember as the biggest internet provider at the time and a company whose free CD’s ended up cluttering up people’s houses throughout the country. Anyway, the merger invited a whole new set of CEOs into the business, most of whom had very little patience for t-shirts, plastic tumblers and rocket ships. 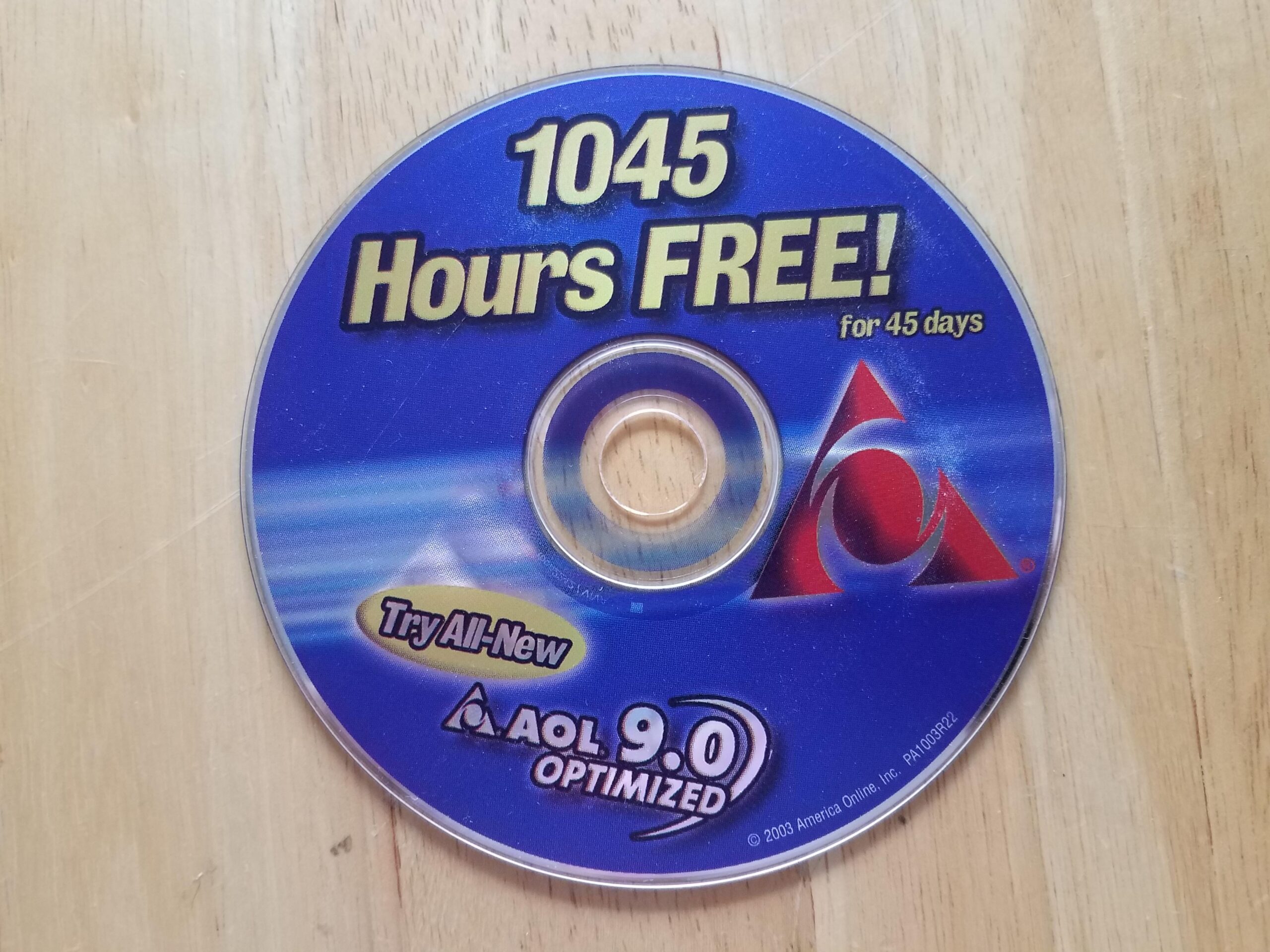 I used to hate AOL. Not sure why.

Coupled with the fact that Warner Bros. had struggled to get a decent film hit in the late 90s, as well as the Looney Tunes pretty much disappearing off the face of the Earth, time was called on the WB Store vision.

All that’s left now is a couple of stores in China and the memories of thousands of Mancs sat at home reading this. Ah well.