Seemingly nondescript, a prickly old brass thing, how did it cause so much controversy? 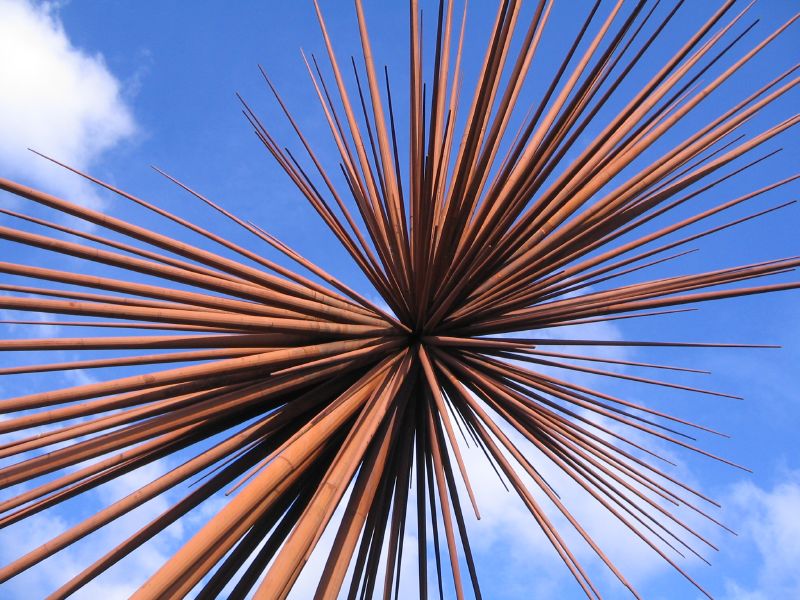 Well, from costing double the amount budgeted and using tax-payers money no less, to really rather dangerously falling apart, the B of the Bang broke records before it sort of just – fizzled away.

There are a number of things in your life that shape your childhood and the B of the Bang statue was not one of those. I did see it every day for a good chunk of my childhood though and I repeatedly ducked (despite being in the car), as the legs/prongs/sticks wobbled in the wind and we scurried underneath in our old Ford Focus on Ashton New Road.

I specifically remember it being a pretty big deal when it was dismantled in 2009 but that was probably for the best really. 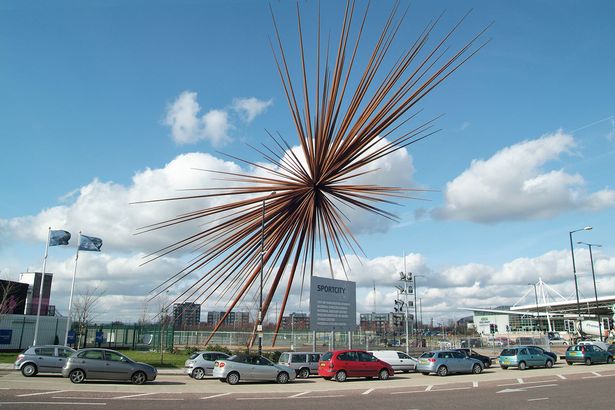 So what was the B of the Bang? The sculpture that stood 56 meters tall on the corner of Ashton New Road and Alan Turing Way was commissioned to mark the 2002 Commonwealth Games. It became the tallest structure in Manchester and remained the tallest in the whole of the UK until 2008 when Aspire in Nottingham was completed.

If you ever had the fortune, or misfortune – depending on your eye for art, of seeing the B of the Bang, you’ll know it seemingly defied all the laws of physics. Poised at a greater angle than the Leaning Tower of Pisa, the sculpture was cursed with a significant bounce whenever there was even a tiny gust of wind (or when a car went past at 33mph). 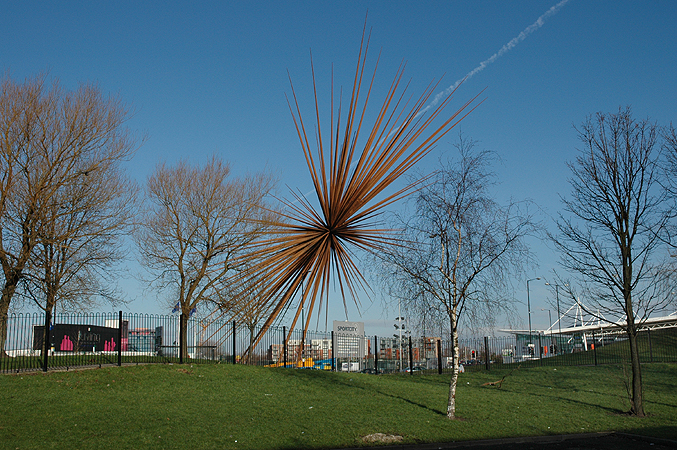 Honouring the Commonwealth games, it goes without saying that the sculpture above all else, was in the name of sport.

More specifically, the B of the Bang was inspired by British Olympic-gold medallist Linford Christie who famously explained his gold medal win was due to departing the starting block ‘on the B of the bang’ of the starting pistol. 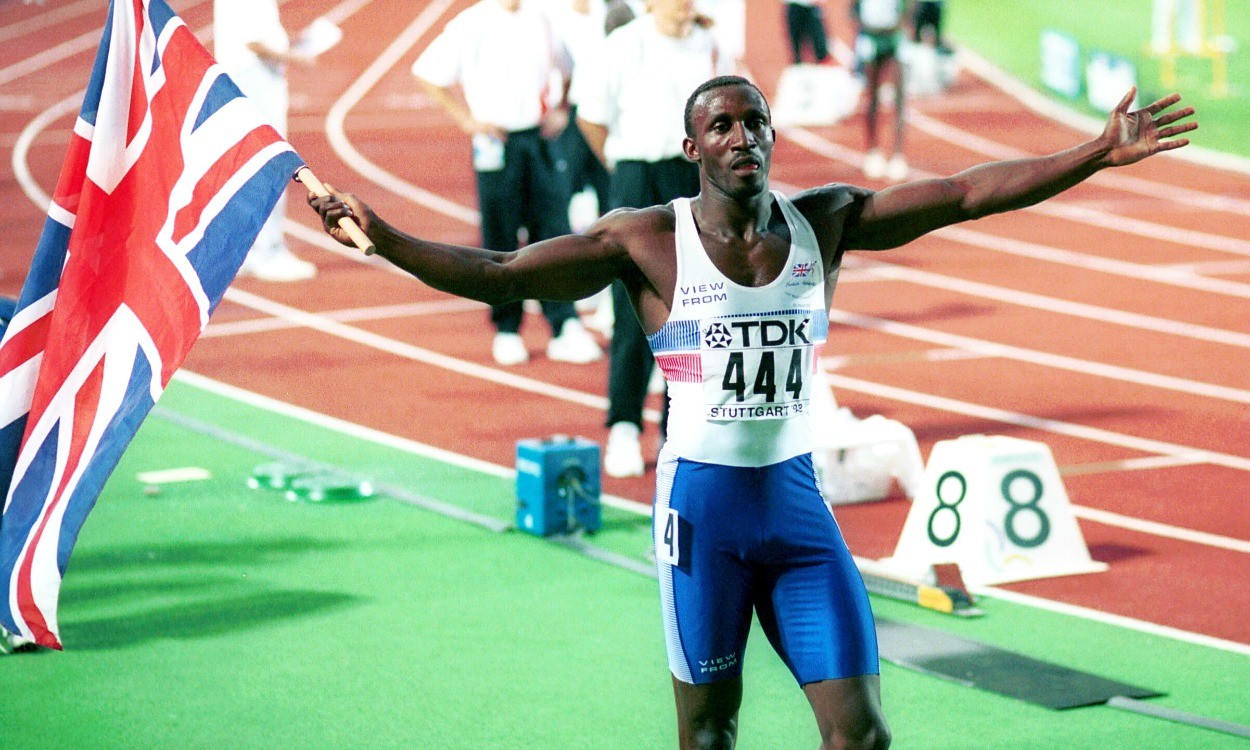 The 180 stainless steel spikes captured the power of athletes, the burst of energy and imitated the sound of a cracking pistol.

Scheduled to be unveiled in July 2003, the B of the Bang’s demise was somewhat inevitable after being finally unveiled almost 2 years later and a series of seriously unfortunate events including exceeding the budget by £750,000.

Designed by Thomas Heatherwick in his Sheffield-based studio, B of the Bang arrived in Manchester in 2004. On its police escorted journey, the sculpture very nearly breached the largest load legally allowed to travel by road. 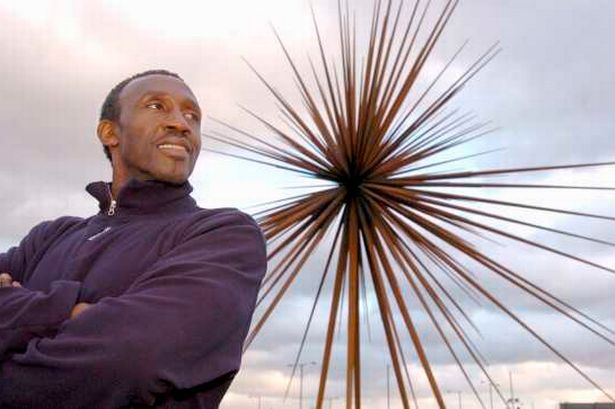 A few painstakingly difficult few months of assembly followed, including the robbery of a 30-foot prong in August 2004. I assume this became the biggest robbery known to man.

Linford Christie officially unveiled the 165-tonne statue on 12th January 2005, coming in at a whopping final cost of £1.42m. Just a mere 19 months late and double the original estimated cost. 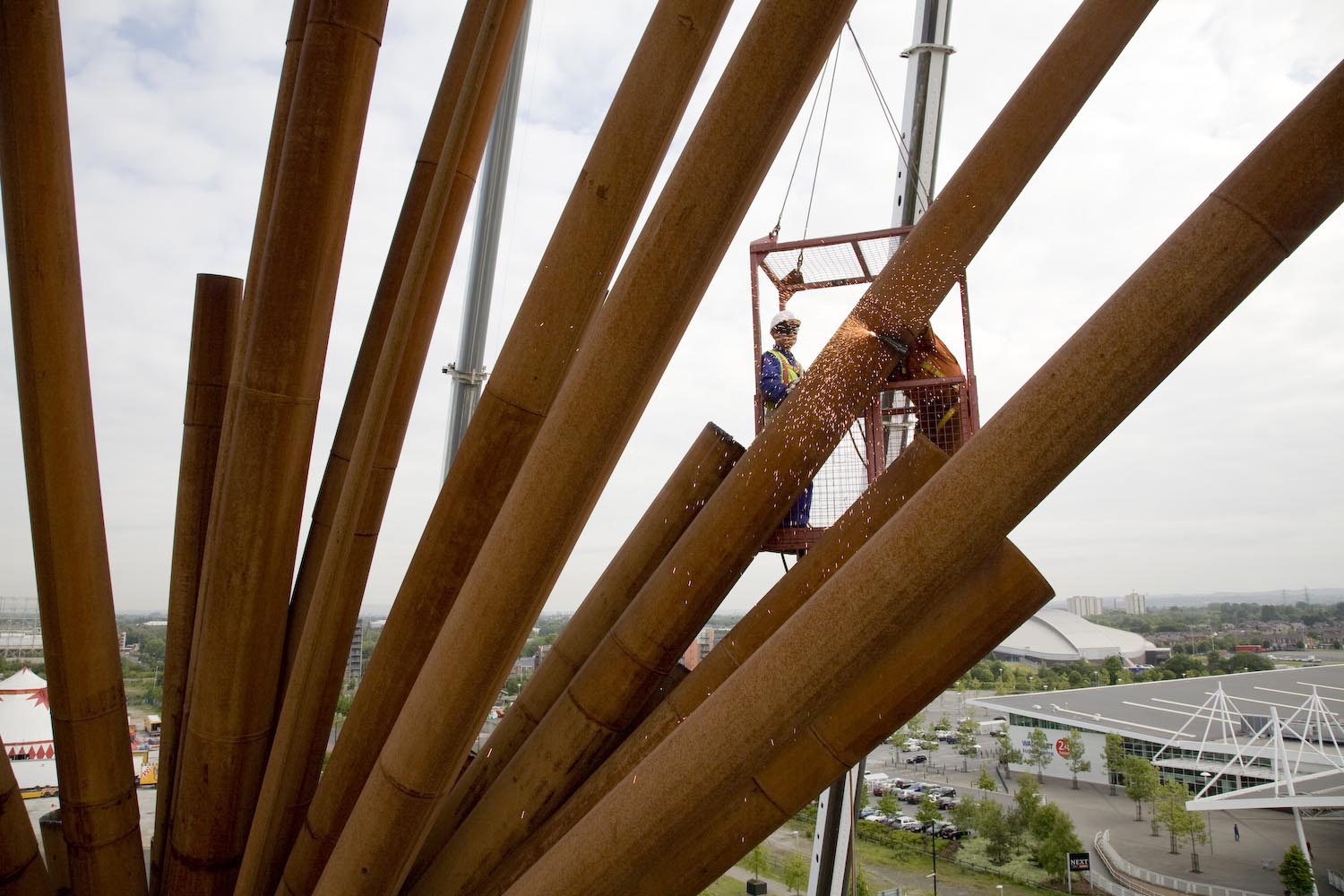 That wasn’t the end of the issues, in fact, a whole catalogue of problems followed after its assembly. The now nicknamed ‘G of the Bang’ held down by 1000 tonnes of reinforced concrete foundations, began to seriously wobble.

A spike fell off just days before the unveiling and in late January 2005, the structure was closed for 10 weeks while efforts to stop the spikes from moving began. 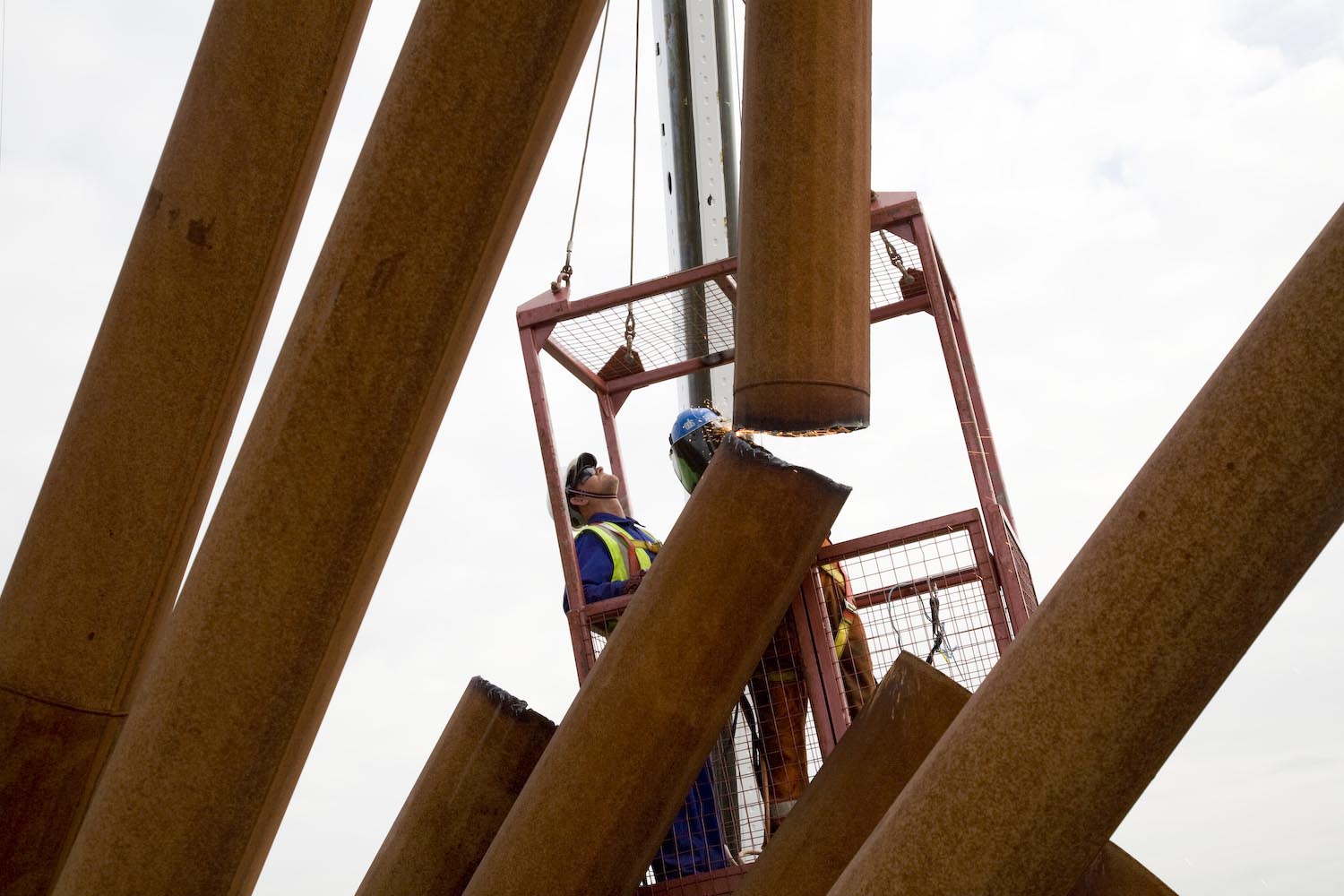 By May 2005, spikes were removed by firefighters to calm fears of the Bang toppling over. They tried everything, adding weight to the tips but whatever they tried, the spikes simply weren’t strong enough to withstand the infamous gale force winds of Beswick.

There were infinite talks of how to recreate the sculpture, could they use carbon fibre? How about glass? Time passed and like everyone who avoids the doctors, its ailments were never resolved.

By this point, the country was in the eye of the storm of the 2008 financial crisis and didn’t have a pot to piss in. Forking out the funding for the remedy of a rusty steel structure? Not happening. 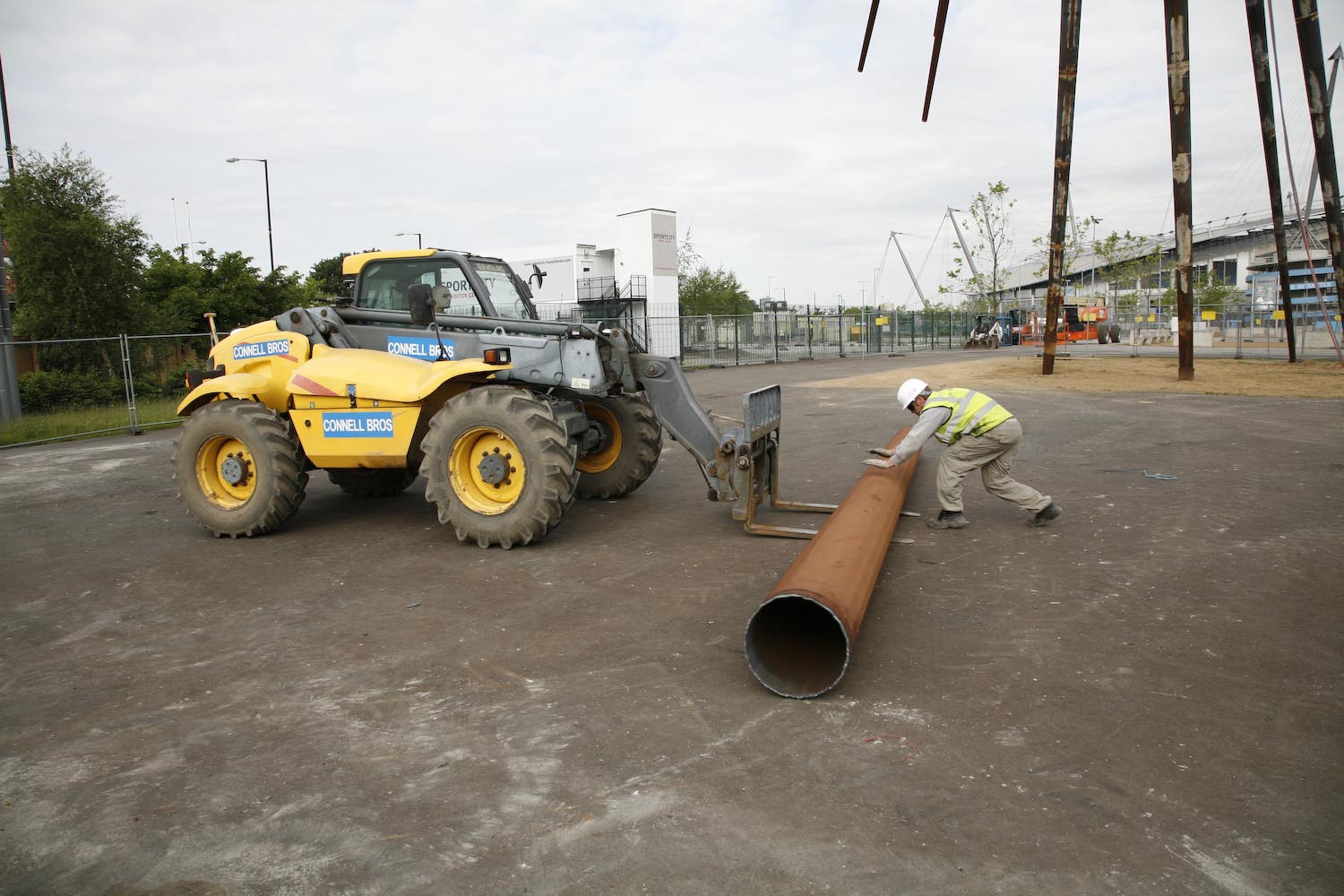 In 2007, legal action was taken against the sculpture studios, eventually winning the Manchester Council £1.7m.

The weathered steel spikes were dismantled after just 3 short years of life using £700k of the settlement to remove the spikes alone. They were carefully (presumably) placed into a secret storage where they have remained ever since.

The core of the £1.42m structure was sold for scrap for £17,0000. There were talks that this was either put into the Town Hall or back to tax-payers. Unsurprisingly, I can’t find out exactly where this money went. But we all know how long renovation of the Town Hall is taking so take from that what you will.

Sculpture, Tom, still hopes for a resurrection of the structure that barely even fizzed never mind made a bang. 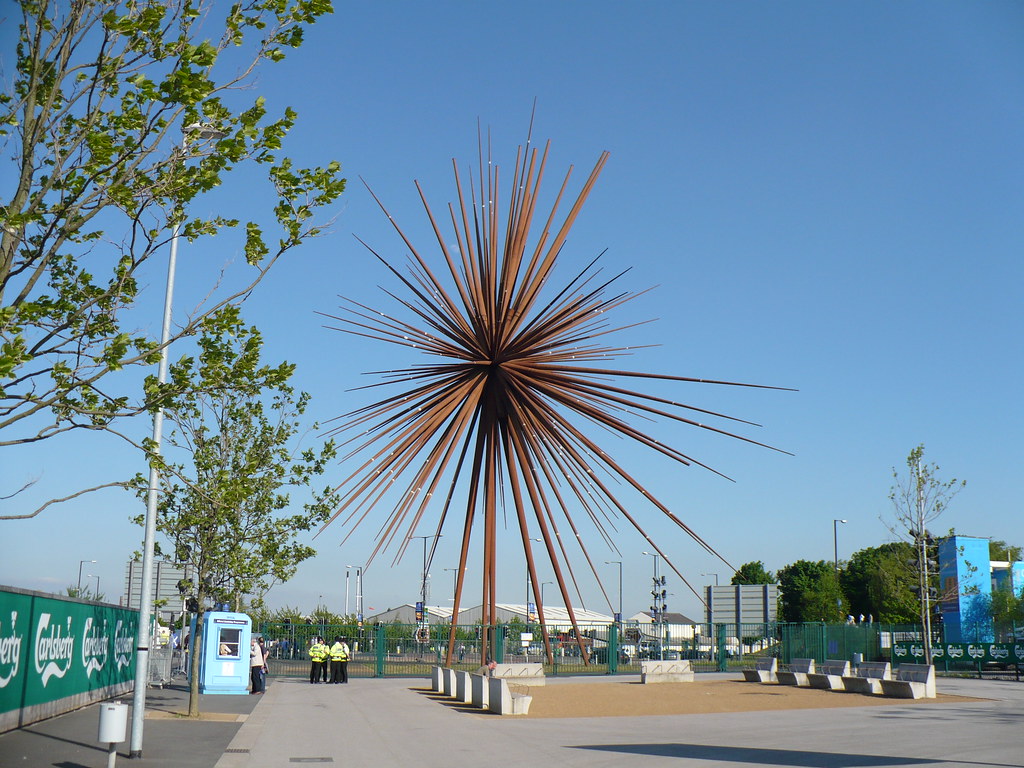 Personally, I miss the rusty old thing. If nothing else it was thrilling driving under something with such almighty killing power. It was a damn sight prettier than that weird bridge Etihad have put up.

So what do you think, should we let the B of the Bang sparkle again or should there be only one Big Bang in history? And more importantly, does anyone have a spare million quid to pop it back up again?