The Trafford Park Hotel is actually rumoured to once have the largest men's toilets in the world... 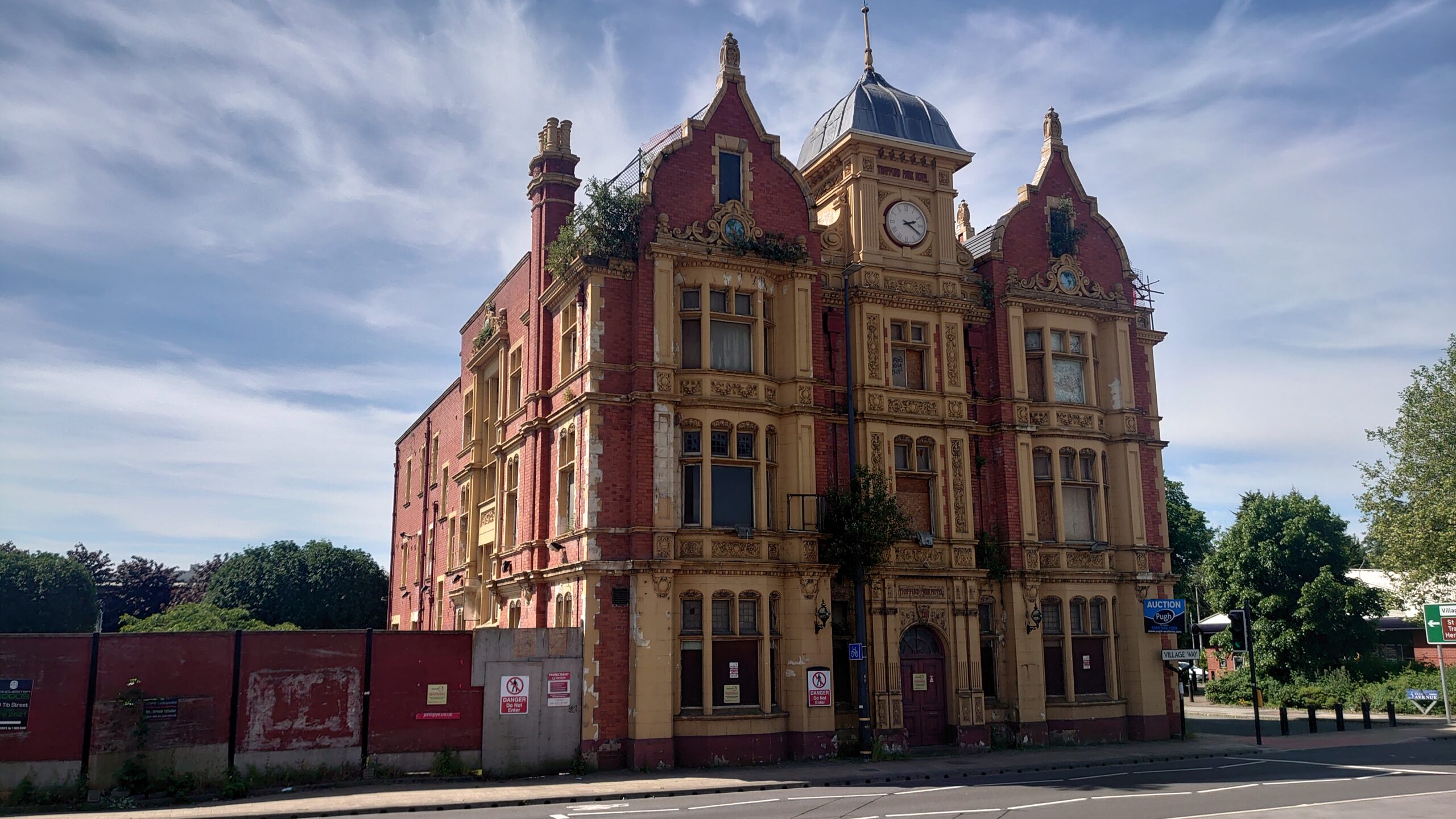 Anyone who’s known me for longer than 10 minutes will know that I used to work at the Trafford Centre. I’d take the 250 bus from town and every time it drove past The Trafford Park Hotel I’d tell myself – “Remember to walk here one day and pop in for a pint”.

It was the sheer size of the thing that impressed me most of all. At three storeys high, plus some Russian Onion Dome-esque ornamental decoration on top, this thing was massive, probably the biggest pub I’ve ever seen and I’ve been in a fair few in my life. Over the course of the next few years, over 500 houses were built in the village, as well as schools and churches – all designed to the American grid system with numbered streets and avenues – a feature which still exists today. The village became a proper community for the workers, with the pub and hotel the beating heart standing right in the centre of it all.

After a hard day of graft in the factories, workers would pop into the pub for a few pints of ale, a chat with their chums and perhaps a bit of a bust up, all ready to go back home and into bed – ready for work at some ungodly time a few hours later. 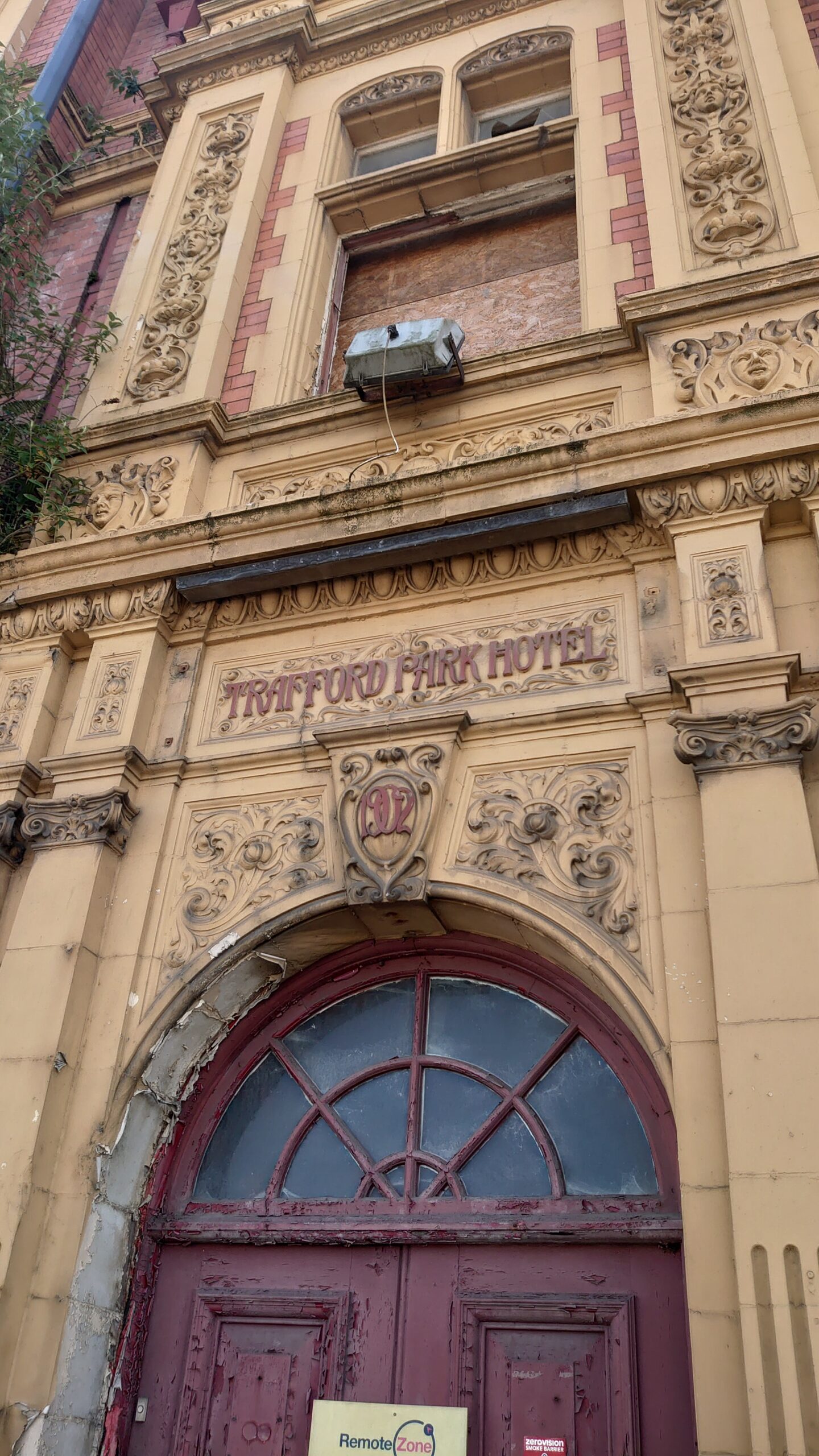 I read somewhere that the men’s toilets in here, the downstairs ones, were actually the largest men’s toilets of any pub in the entire world. But I can’t find that tidbit of information anymore, and so it remains unsubstantiated. If anyone can help with that – let me know.

By the time I was going past on the 250 bus though, the pub and hotel was well past its glory years and things were winding down.

A shell of its former glory, the ‘village’ that sustained its existence for so many years was long gone, and even though the industrial estate is still the biggest in Europe – nobody wants to live there any more. Not when they can just drive into work instead. 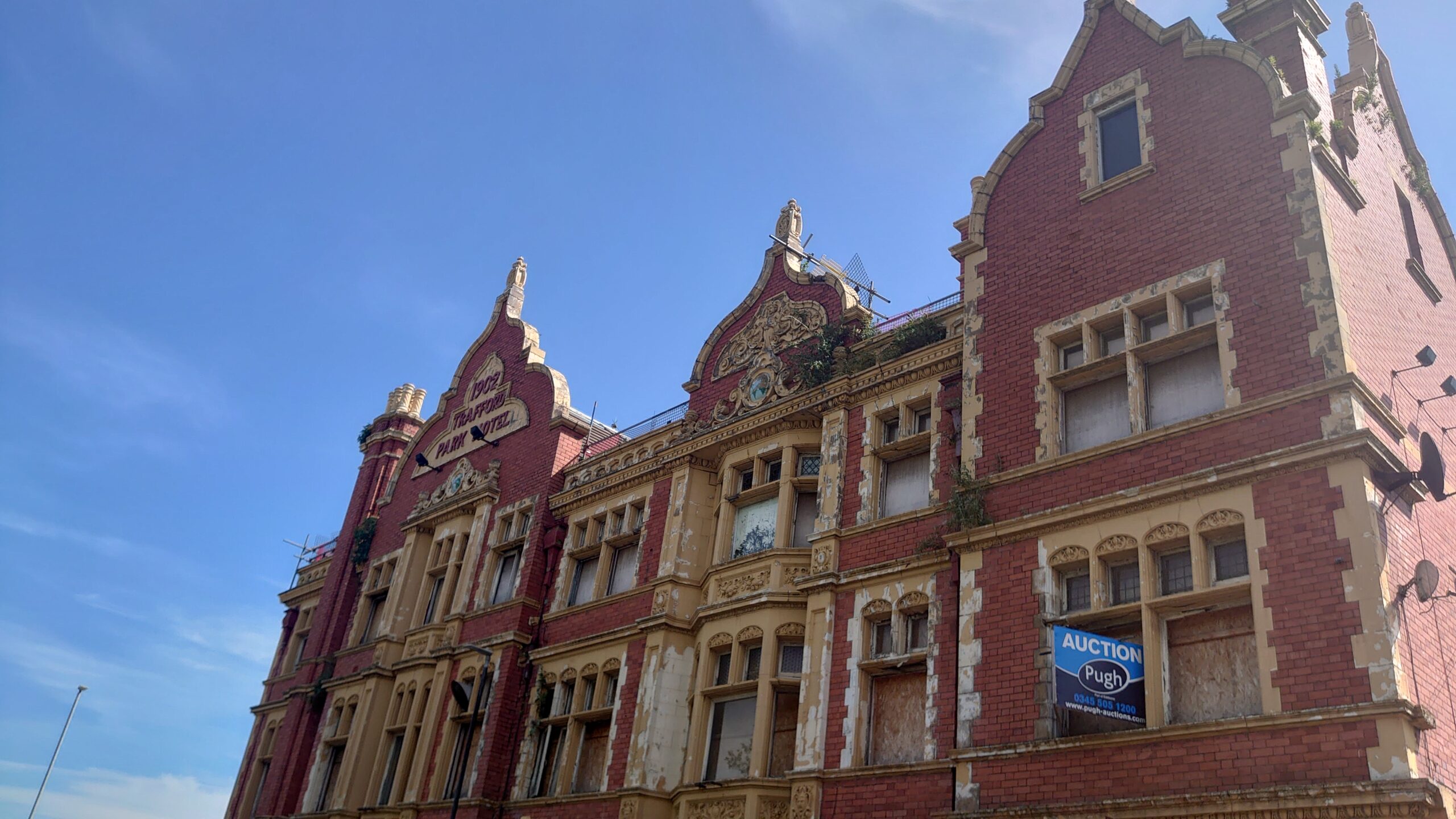 In 2009 the pub closed its doors for the very last time, and since then it’s stood derelict and sad. Many of its windows have been smashed in, and it was actually at one point used as a cannabis farm by some entrepreneaural squatters, but even they’ve gone now too.

The building went to auction in 2017 and it took THREE HOURS for the whole thing to be over. After 250 bids in total, the Grade-II listed building sold for £900,000 to Ashley Hotels, who wanted to breathe life back into the site with a swanky new hotel. But, nothing came of it. So they sold it Property Hub for £825,000 in September 2020, who then apparently sold it once again to its current owners. 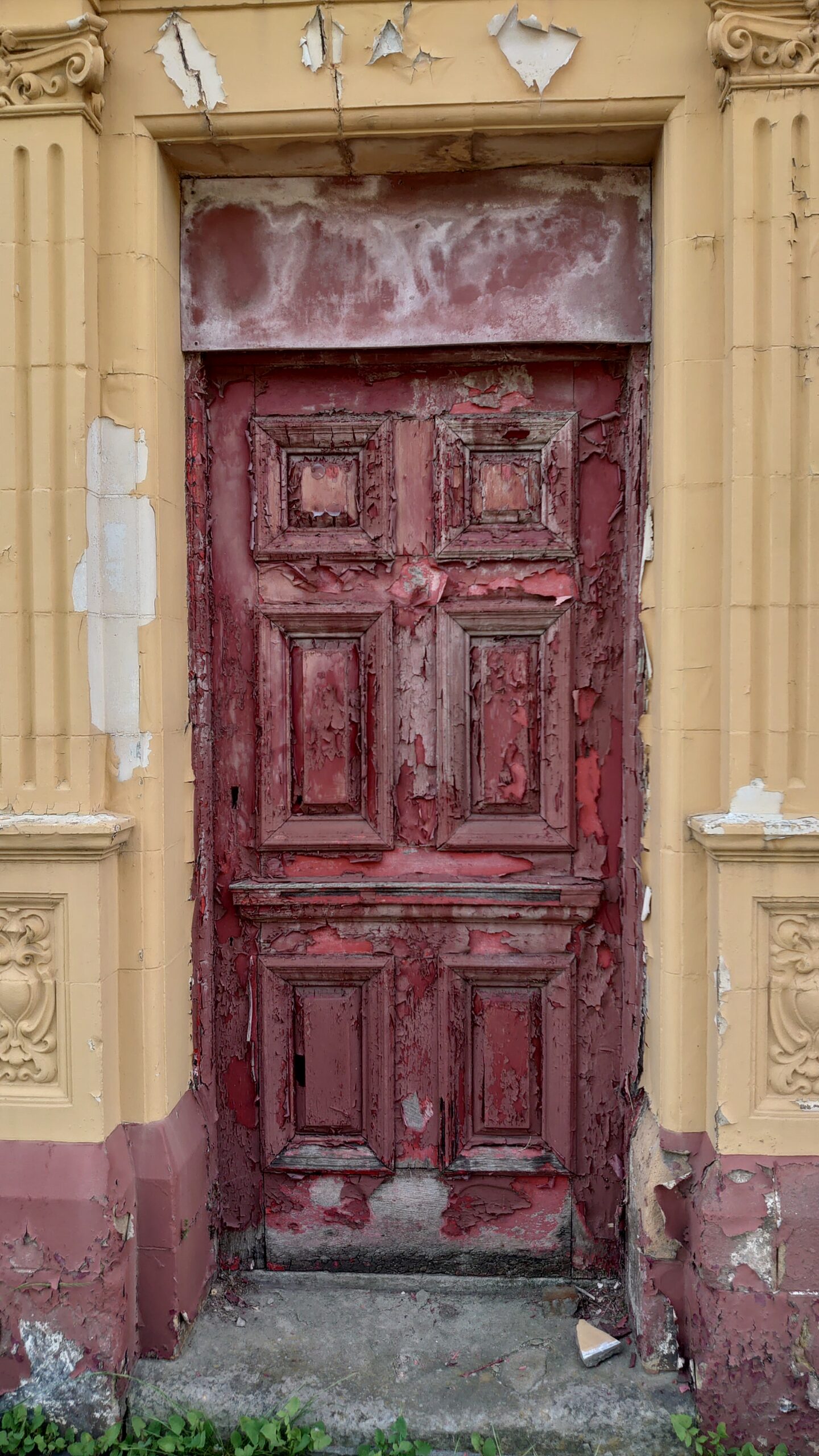 This week saw an application submitted to Trafford Council from a Bolton company – Food & Tipple Ltd – to transform the pub into 15 apartments and to then build a block of 20 apartments alongside it. The application says:

“This application also seeks approval for a new residential block to be constructed within the site, adjacent to the existing building.”

“Such a move could help to safeguard the future of this building through sensitive refurbishment work and an end to its dereliction.” 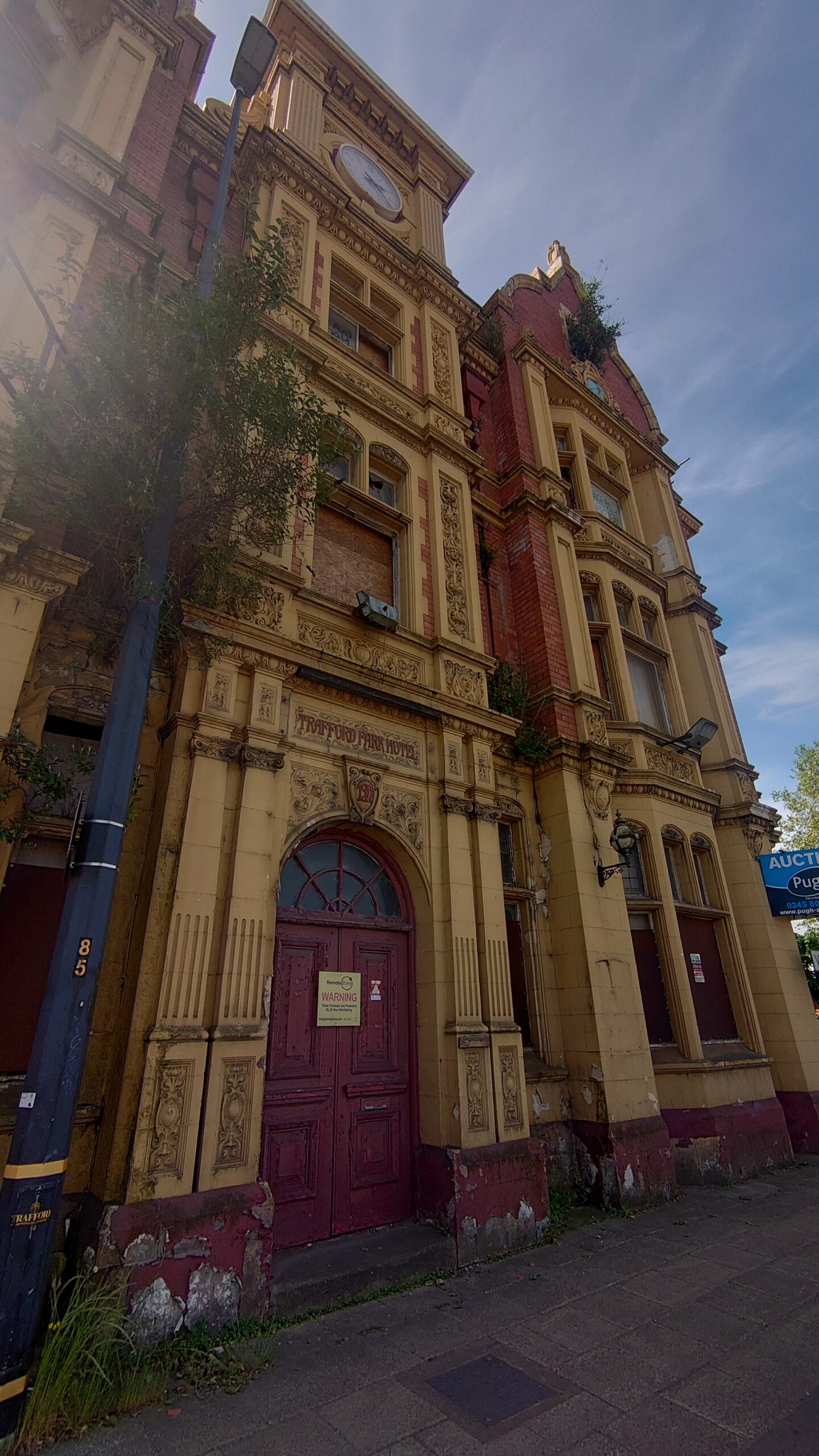 Of course, any or all decisions made on the Trafford Park Hotel would be good for it, as it’s currently just slowly rotting away in the Manchester drizzle. If the building is to be turned into apartments though, one can’t help thinking that it’s a massive shame that it’s not going to be used for its original purpose.

I for one wouldn’t want to live right in the middle of Trafford Park Industrial Estate, and can’t see the attraction apartments in that space. Similar concerns have been raised by others, including Tim Field, Pub Protection Officer for Trafford and Hulme CAMRA, explained:

“While Trafford and Hulme CAMRA supports the retention and reuse of this historic, Grade-II listed building, it would like to see the feasibility of its reuse as a hotel explored further and therefore objects to this application.” 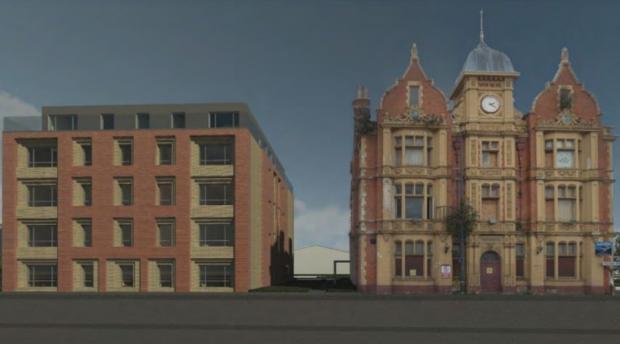 With such a stunning building, with so much history it’d be a shame to see it turned into apartments, but this is, of course, an option that’s much, much better than just letting it rot away.

Personally I’d like for the idea of turning it back into a hotel and pub to be examined further – if it’s done right it’d be a huge success – especially being so close to Manchester United’s ground, and with all of the new attractions coming to Trafford in the coming years – will be perfect placed for tourists and visitors.

Salford’s Very First Vegan Festival to Take Place This May