The Good, The Bad & The Poo Bags: What it's actually like to Adopt from Dogs Trust

Is it me or does everyone have a dog now? 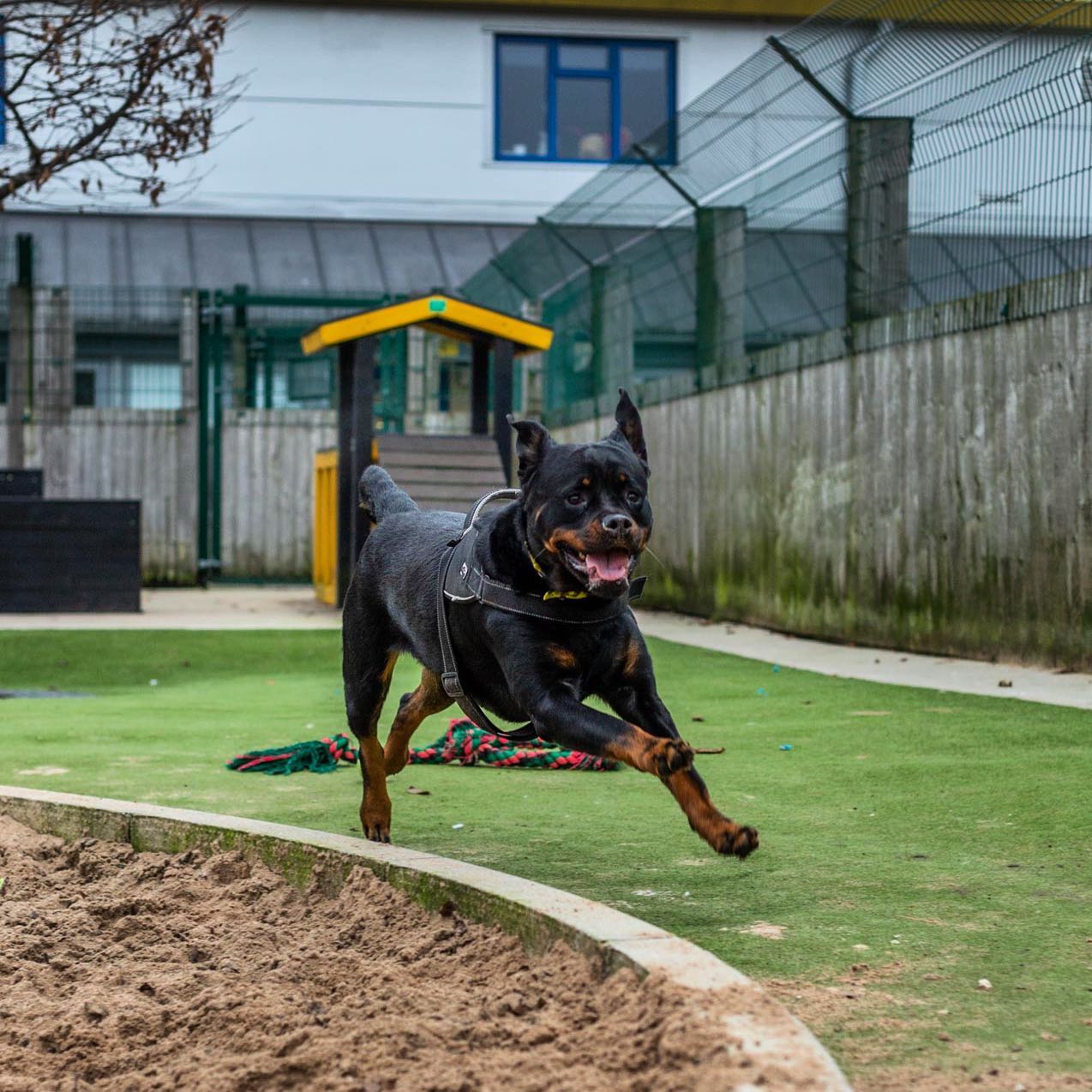 Even people that I thought would never want to even touch one of the hairy blighters in the past, well, they’ve jumped head-first into the world of kibble, walks, drool and picking up poos on a drizzly Tuesday morning in the park.

A lot of it is down to the pandemic – which saw around 1.5 million extra dogs acquired by Brits – a consequence of people stuck in their homes, bored, and with lots of free time on hand. It’s thought that many of these dogs were bought as an impulse buy as a result of being thrown into lockdown, and breeders and prices went into overdrive.

It’s now not uncommon to pay upwards of £4000 for a puppy, and there’s been a huge influx of dogs imported from Europe in the last couple of years to keep up with the demand. 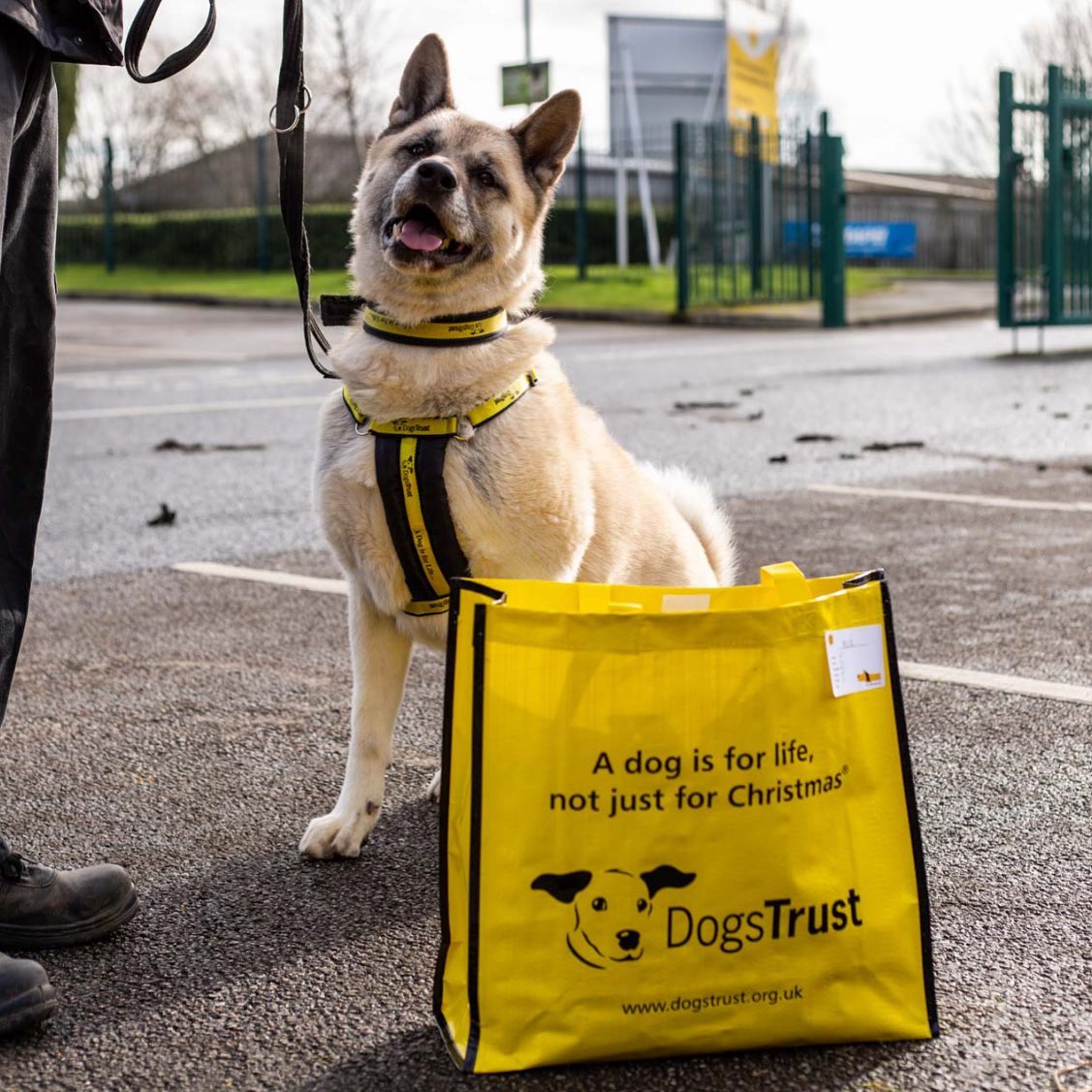 Dogs’ charities understandably became worried, and still are, with Dogs Trust seeing a 39% increase in phone calls from people wanting to hand their dogs over once lockdown had finished. And now, over a year and a half later, they’re still experiencing record numbers of dogs being abandoned and handed in.

The reason I’m telling you all this is because it’s in this landscape where I myself adopted a dog from Dogs Trust, who operate their Manchester branch from a rather impressive Rehoming Centre in Denton.

Now is the time that I introduce you to my dog. His name is Wonder (as in Stevie) and he’s 8 months old and he’s been completely blind since birth. 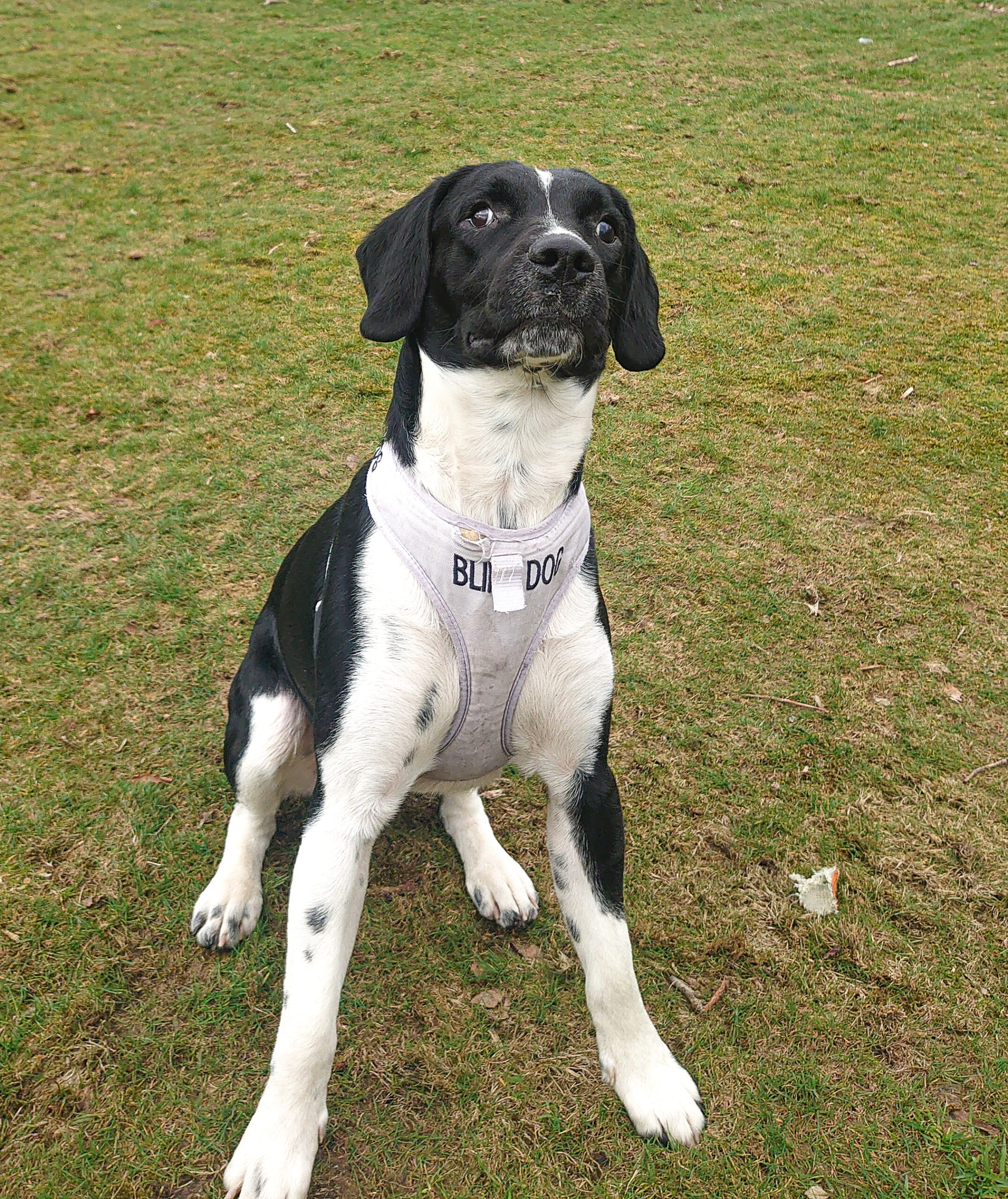 He’s a spaniel/beagle cross, and was bred for work, but with his knackered eyes – he was of no use to the breeder. For the first 6 months of his life, he was pulled from pillar to post, before ending up with the Dogs Trust.

His story is unique insofar that he’s blind, however, it’s important to note that many of the dogs that end up at Dogs Trust, or other rehoming centres or charities, have often had difficult and challenging lives.

This isn’t always the case, but invariably these dogs have been left by owners who feel that they can’t look after them anymore, and so when it comes to rehoming, Dogs Trust must be extremely thorough when choosing a new home. 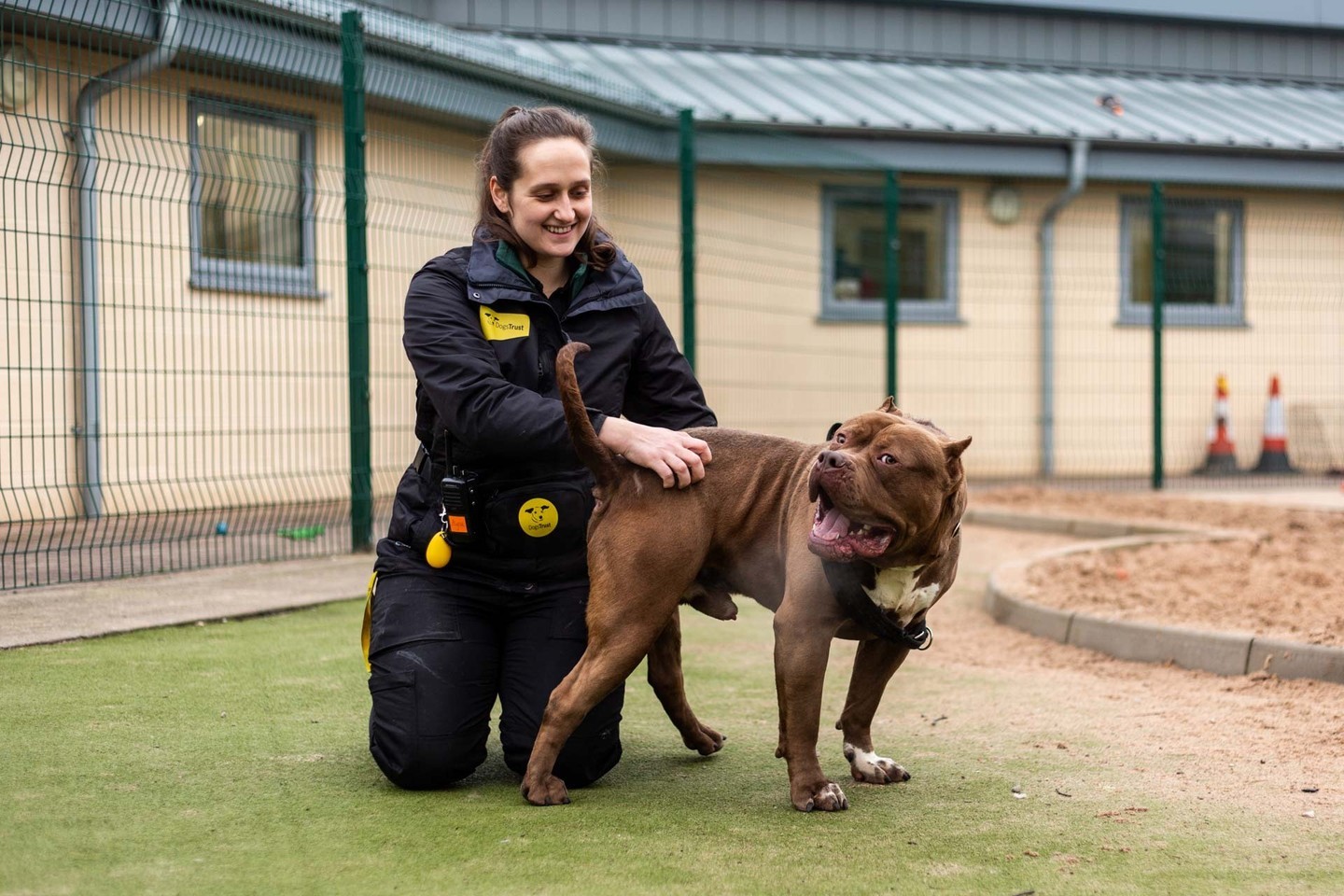 I think many people’s perception of the process of adopting a dog is mainly negative – with the assumption that you’ll end up with a dog with serious behavioural issues, AFTER you’ve jumped through plenty of hoops to prove that you ‘qualify’ to actually look after it in the first place.

Well, from my experience, I can tell you that that certainly isn’t the case at all – and in fact, the whole process was simple and easy and best of all – Wonder is an absolute beauty.

Your first encounter with Rehoming from Dogs Trust (or anywhere really) will most likely be their social media channels and website – where they regularly list the dogs that they have available for rehoming.

I used to just check on the website every now and then to see what good little doggies I could see, read up about them and generally just go ‘awwwww’ before getting back to playing Minesweeper. 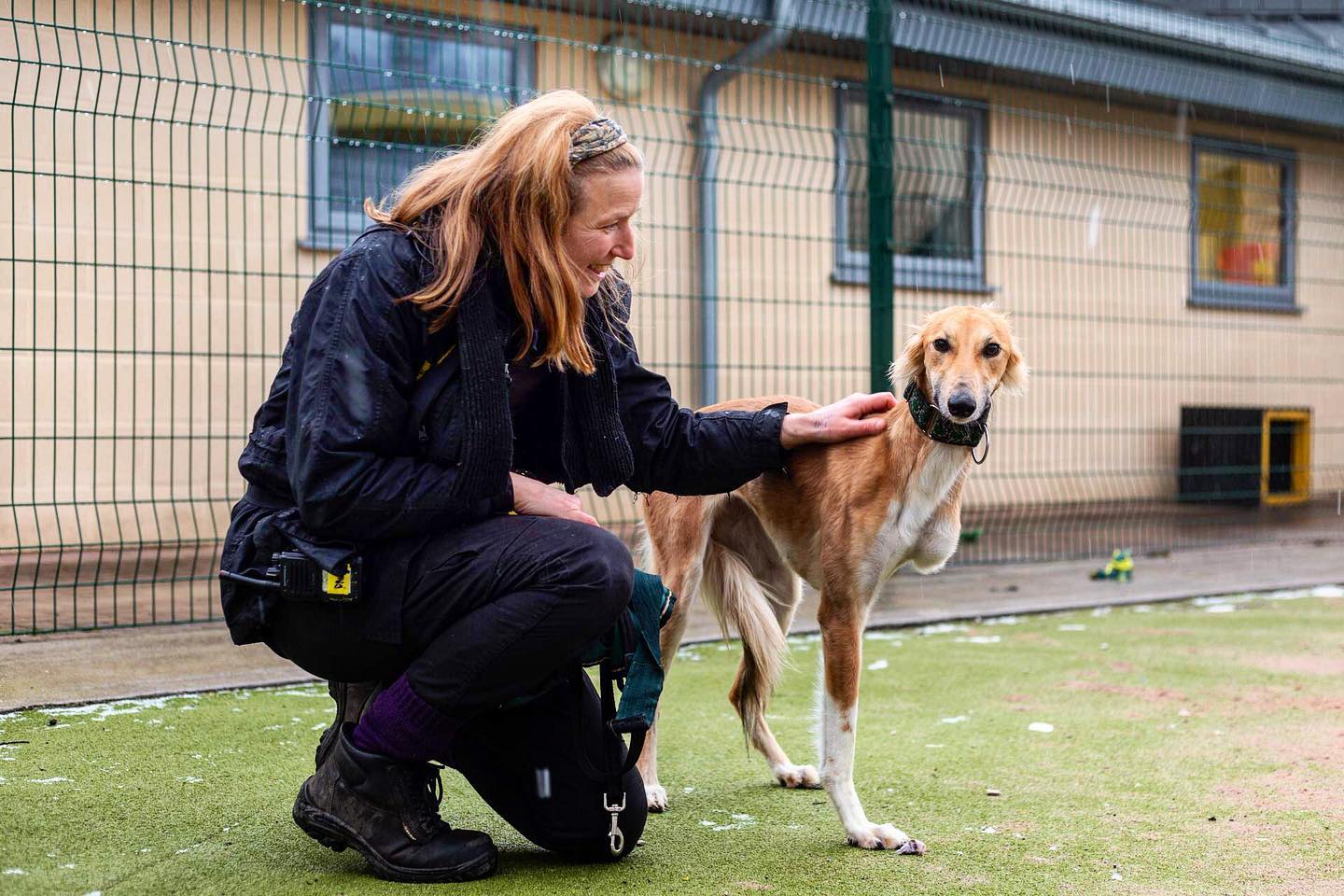 There’s typically ALL SORTS of dogs in the rehoming centre, from young puppies to gnarly old fogies, greyhounds to the odd poodle. Of course, there are a few breeds that more commonly find themselves in places like this – but it could really be any.

I’ve seen Huskies, Shar-Peis, a three-legged greyhound called Lady, and then I spotted Wonder and that was it. I showed my wife and she fell in love with him too, and so on a Thursday night I began the process of adopting the little fella.

Once you’ve found a dog, the next step is to fill in Dogs Trust’s Application Form online, which sounds a bit daunting but it’s really rather easy. It asks a lot of questions, but this is where the first part of their thorough screening process begins – so stick with it.

Looking back now, it kind of felt like applying for a job, which isn’t the most enjoyable thing in the world, but totally necessary – as the Dogs Trust want to limit the chance that the dog goes to an unsuitable home as much as possible (obviously). 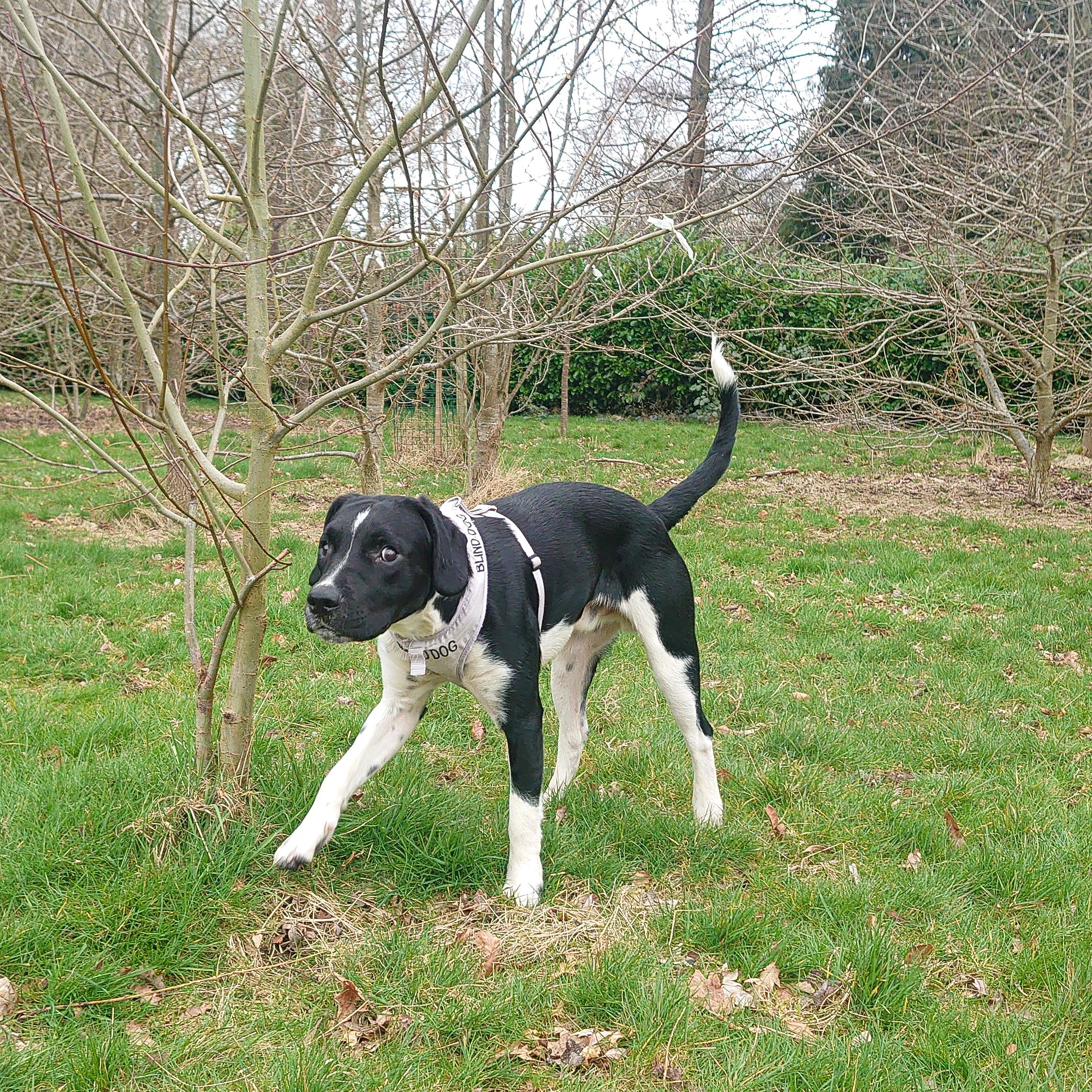 Around two and a half weeks later I got a call from Alice at the Rehoming Centre – caught unawares at work – I had just assumed that we weren’t successful and carried on with my life.

Alice wanted to know if we were still interested in adopting Wonder and after a resounding ‘yes’ from me – we arranged for our first couple of ‘meets’ with him.

I suppose the purpose of the pre-adoption meets are so that both parties are completely happy with each other, but mostly to see if this is the right dog for you. They include the chance to have a little play, take the dog for a walk and then talk in more detail about their history, issues and anything else that you need to know.

My wife and I popped down to the Rehoming Centre in Denton and met Wonder for the first time and we were both seriously nervous about it beforehand. What if he didn’t like us?! 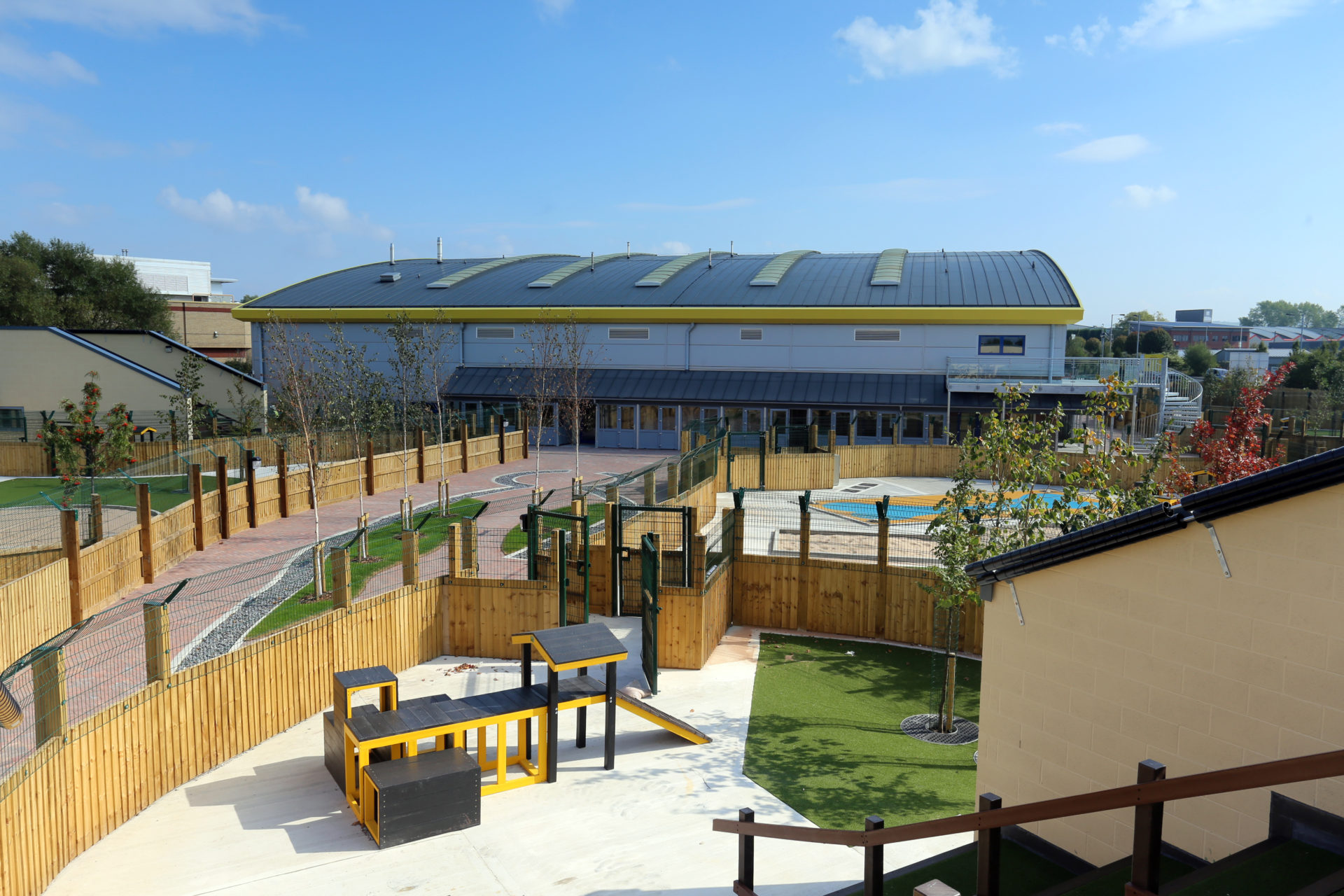 The Rehoming Centre in Denton

We went for a little walk with Wonder and then played with him in one of the pens outside, whilst the trainer talked us through everything we needed to know about him, answered all of our questions (stupid ones too) and generally made us feel much more confident about the whole thing.

After another meet on a Saturday morning where I spent about 30 minutes introducing Wonder to the beauty of all of my favourite WWF wrestling moves – we arranged a date for him to be dropped off at our house.

The days before he arrived were a bit manic, mostly because we needed to ‘blind-proof’ the house, but it was relatively simple, and as luck would have it – none of it was needed because Wonder is an absolute genius when it comes to scent mapping. 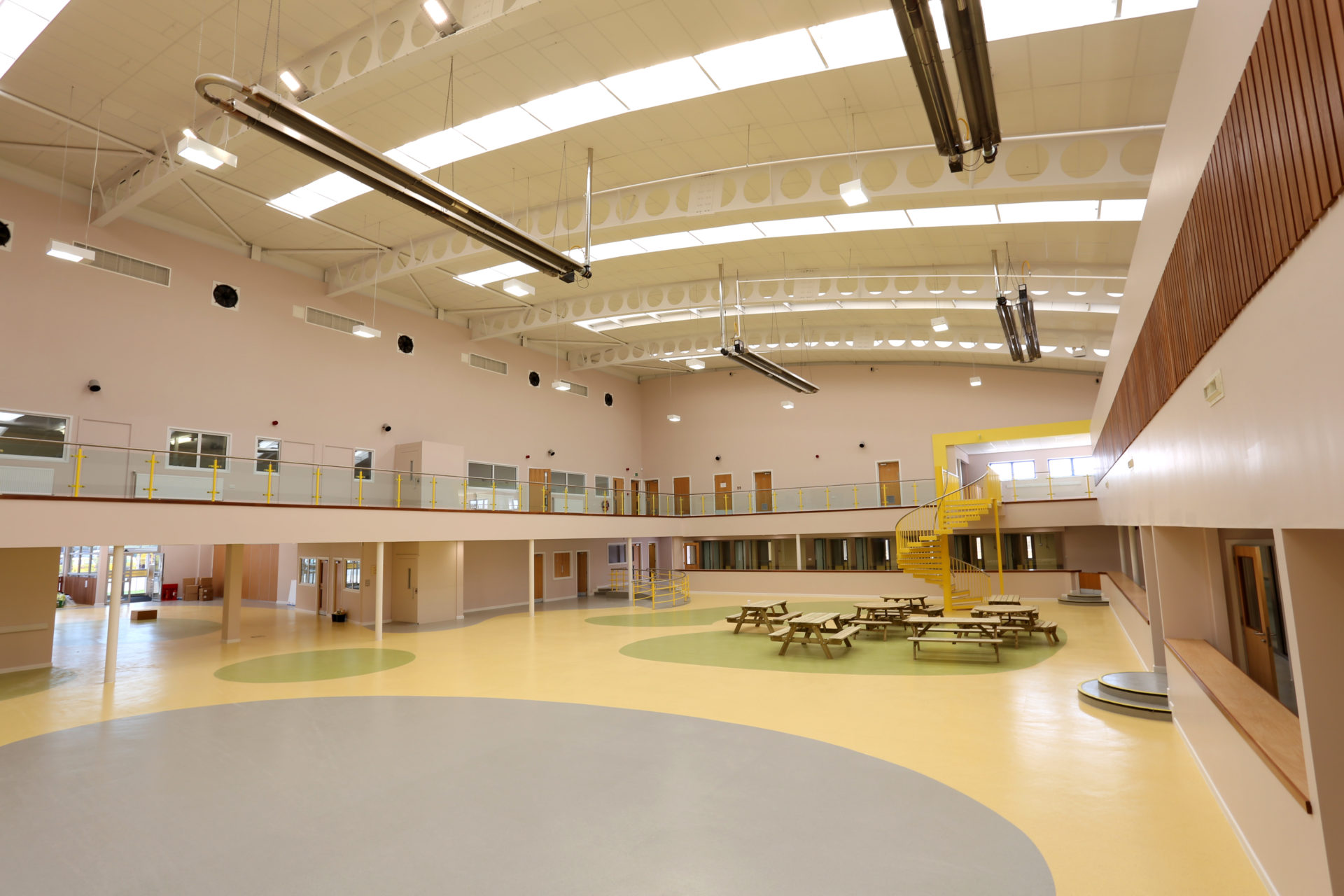 The pre-adoption process, and indeed the first time that the dog is dropped off at your house are all vital steps in the screening process – ensuring that you’re happy with the dog and are totally committed to going ahead with it. I suppose this is the best way for rehoming charities to ensure that these decisions aren’t made on a whim, which would result in the dog just returning back to the centre, or worse.

The cost of adopting a dog from Dogs Trust is a mere £205, and they throw in a weeks’ worth of food, and a few goodies too – a harness, a lead – just enough to get you started.

I think it’s a good time to go back to one of the main worries that people may have with adopting a dog, and that’s behavioural issues caused by mistreatment and trauma in the dog’s past.

Dogs Trust pride themselves on the high quality of their rehabilitation programmes for their dogs. Highly dedicated trainers and behaviourists work tirelessly with their dogs to get them to a stage where they can be adoptable. 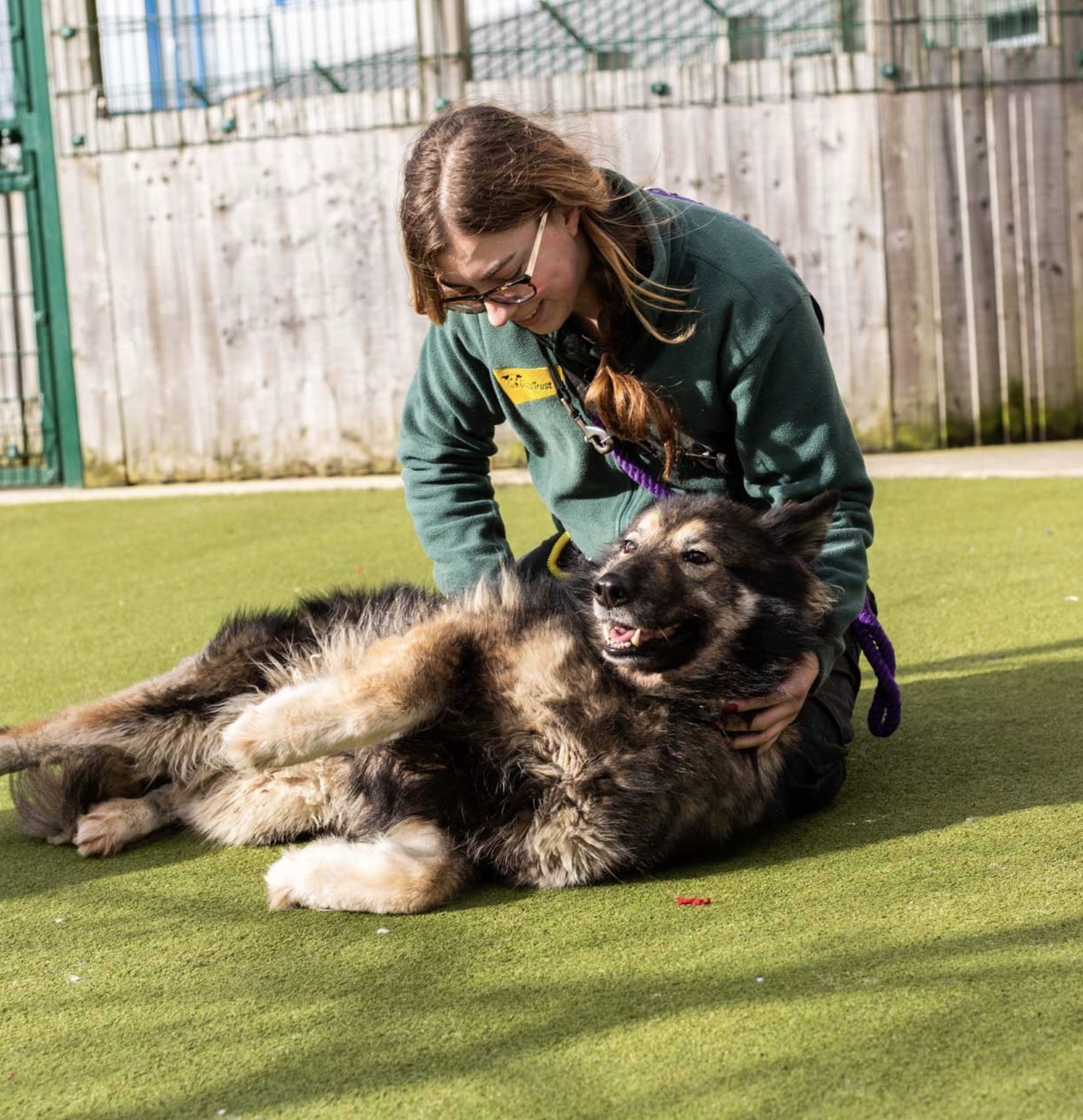 It’s also worth noting that Dogs Trust also include a lifetime of FREE behaviour advice for their dogs and their owners – you can ring them up anytime and speak to people who know the dog, helped to train them and can provide the very best advice for the issues.

All dogs can have behavioural issues, and it’s a complete minefield out there when it comes to solutions and advice. Recent years has seen a huge increase in the demand for behaviour therapists and trainers, but if you’re adopting a dog – most of the work has already been done for you.

The specialist trainers and behaviour experts will coach and work with the dog whilst they stay at the centre, so the likelihood of there being any serious issues is greatly reduced – much less so than if you’ve just bought a puppy and look to do the training yourself. And best of all – it’s cheaper!

Wonder, for example, spent a total of around 6 weeks in the centre in Denton and he was looked after by the experts day-in, day-out. 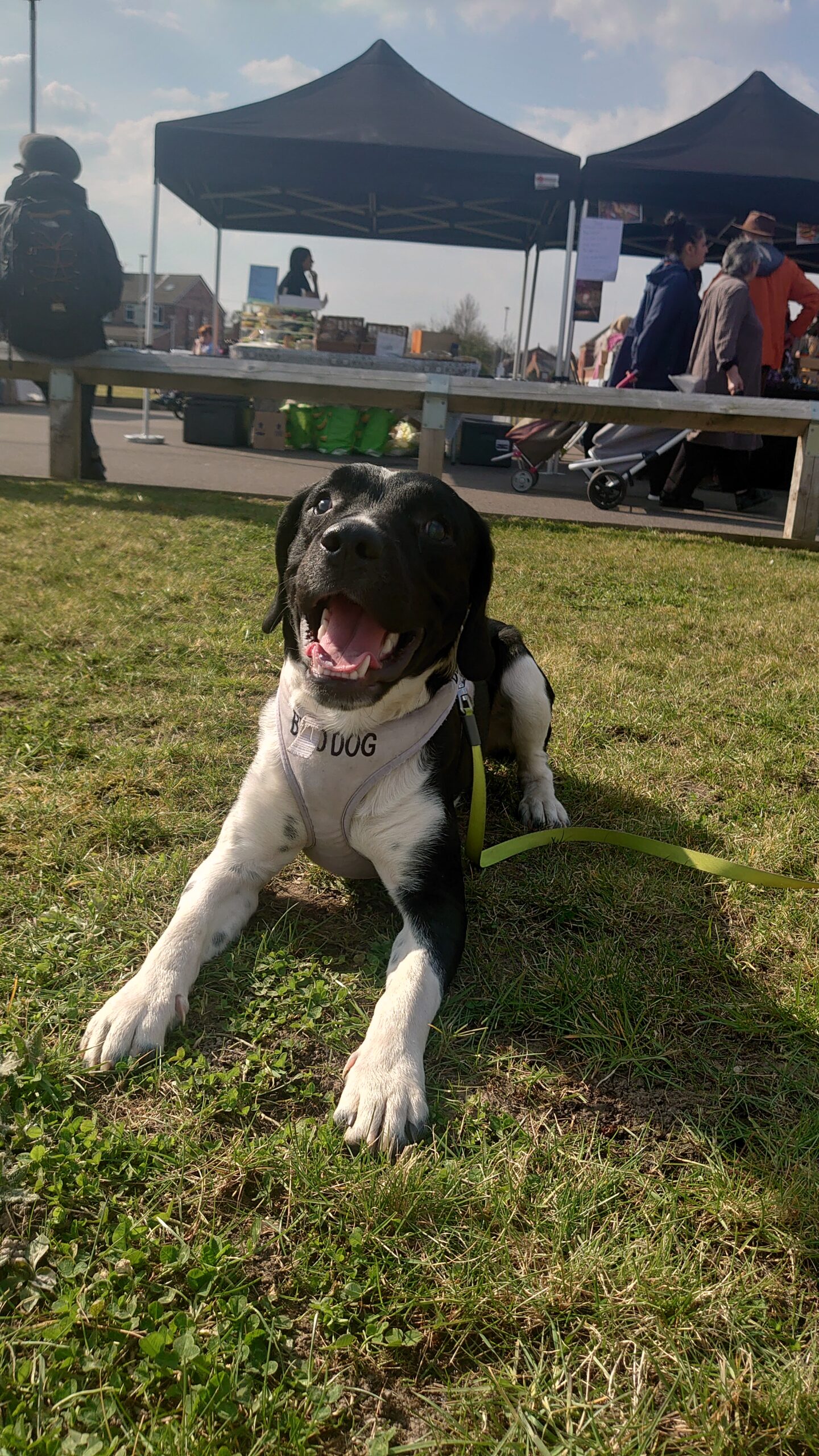 He’s a very good boy and apart from a little separation anxiety (which is most likely brought on due to his abandonment, life in the kennels and his lack of sight) he’s been perfect. Even with being blind, he’s super-focused, calm and has no problems with other dogs, humans or indeed our cat.

Wonder has been with us for 5 weeks now and he’s absolutely perfect. The whole adoption process for him was flawless too – from the communication with the staff in Denton, to his training and even now with his after care – which sees the team check in to see how he’s doing and if there’s anything that their training team can assist with.

The Dogs Trust isn’t the only dog adoption charity and service out there, but it’s the one that I used and thus have the most experience of working with. It may be that in your area there are smaller charities and organisations looking into rehoming dogs – and I suspect that their services will be very similar to that of the Trust.

Speaking to one of the trainers, whilst Wonder rolled about on his back, it was clear that the Dogs Trust are absolutely stacked at the moment trying to re-home all of the dogs that they have coming in – any help from the people of Manchester would be greatly appreciated I’m sure.

So, if you feel like you’re up to the challenge – head on over to their website to see who’s there at the moment…

Alternatively, if you don’t want to adopt a dog, you can still help by sponsoring one, or just donating. All of the information is on their website right here:

Worldwide FM Takeover, an Asian Food Fair & The Best Things To Do in Manchester This Week