The Swinging 60s of Manchester Pantomines: A Who’s Who of British Entertainers

The glittering array of talent in Manchester pantomimes in the 1960s read like a who’s who of British light entertainment. 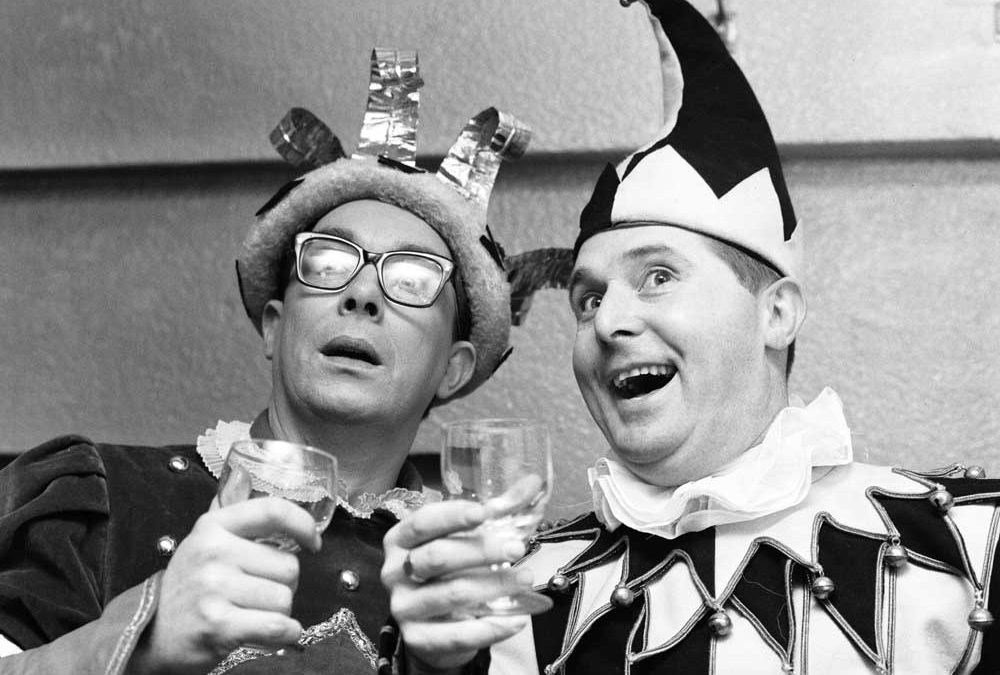 Norman Wisdom, Bob Monkhouse, Bruce Forsyth, Ruby Murray, Des O’Connor, Alfred Marx and Freddie and the Dreamers all trod the boards at the Palace Theatre during the decade.

But perhaps the biggest box-office attractions were the stars of the 1965 panto Sleeping Beauty – none other than the nation’s favourite comic duo Eric Morecambe and Ernie Wise.

The two were already household names even though their much-loved annual Christmas TV shows – a BBC staple – were nearly three years in the future. 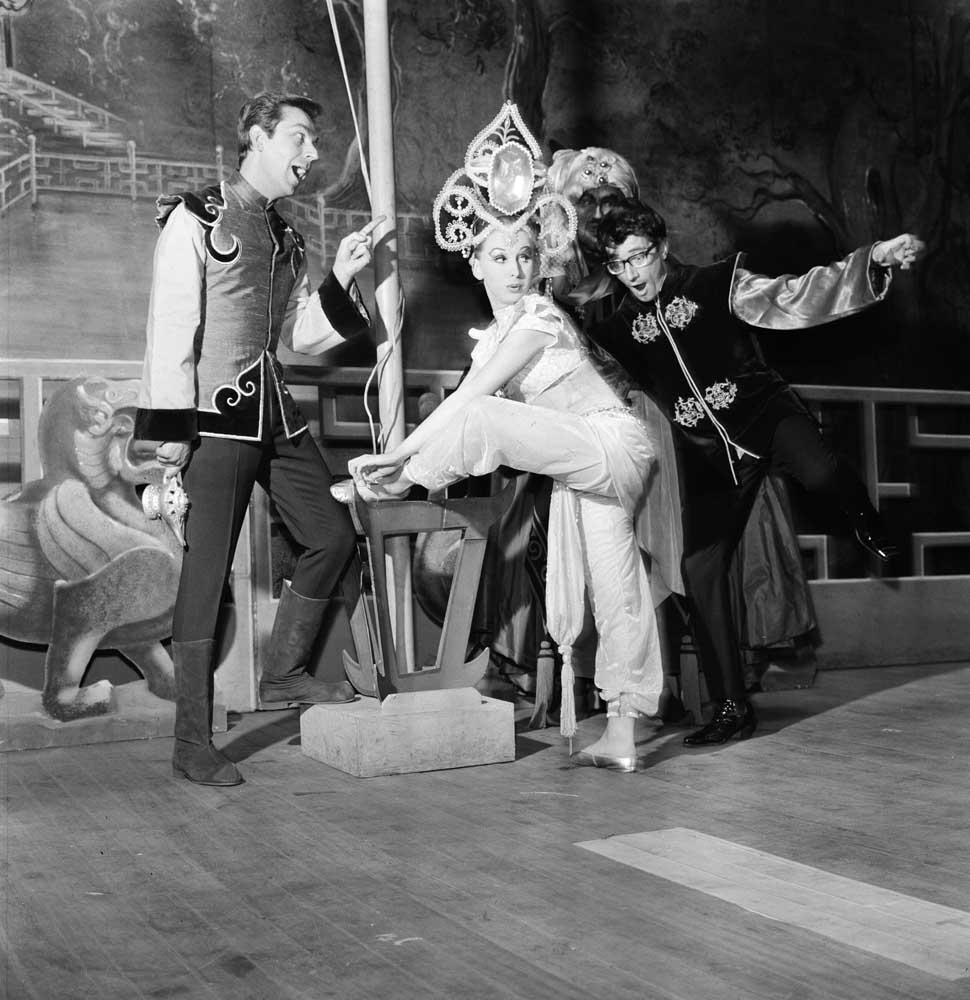 Des O’Connor, Freddie Garrity and Mary Hewing as the genie in Aladdin, December 1965

At the time they played the Palace, Morecambe and Wise were starring in their own ATV show Two of a Kind, written by their future long-term scriptwriters Dick Hills and Sid Green.

Two of a Kind ran from 1961 to 1968, up to the point when the duo joined the BBC. It introduced some of the pair’s classic catchphrases, including ‘Tea Ern’ and ‘Get out of that!’

The show also earned Morecambe and Wise the BAFTA award for the Best Light Entertainment Personalities of 1964. 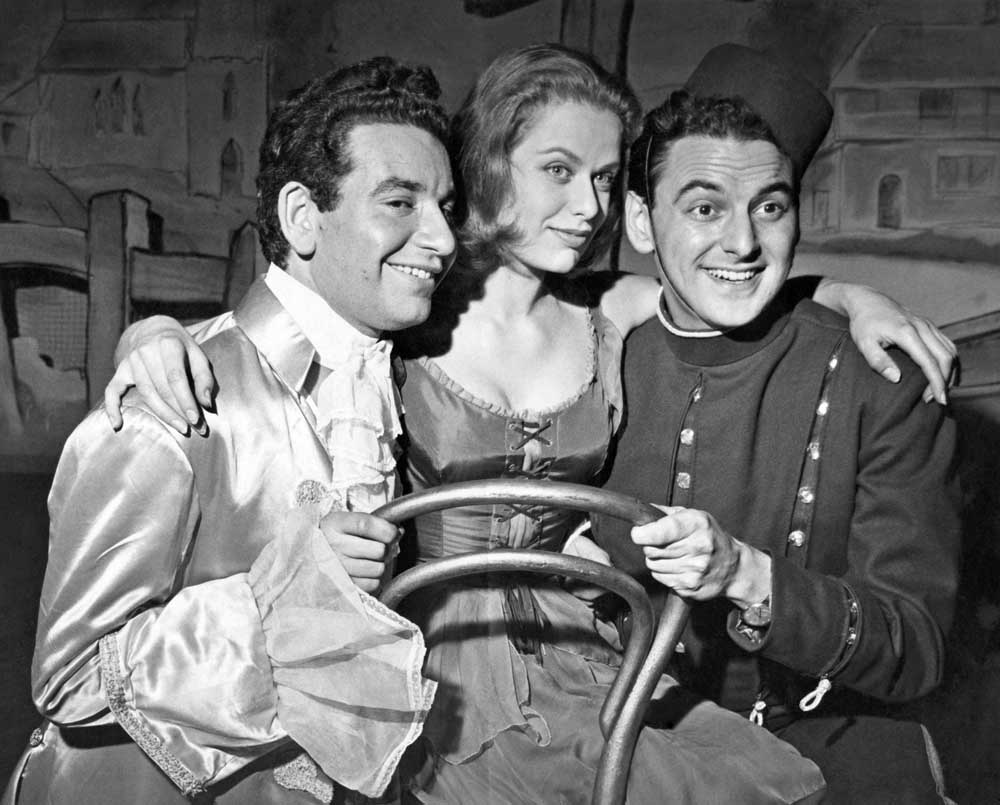 Comedian and entertainer Bob Monkhouse was starting out in his career in 1958, and making his pantomime debut, when he played Buttons in Cinderella at Palace Theatre.

He’d just appeared in the first Carry On film, Carry On Sergeant, and had hosted the British version of the American TV show Do You Trust Your Wife? from 1956 to 1958.

He was helped in his first panto by an experienced cast including female impersonator Danny La Rue and actor George Arnett. 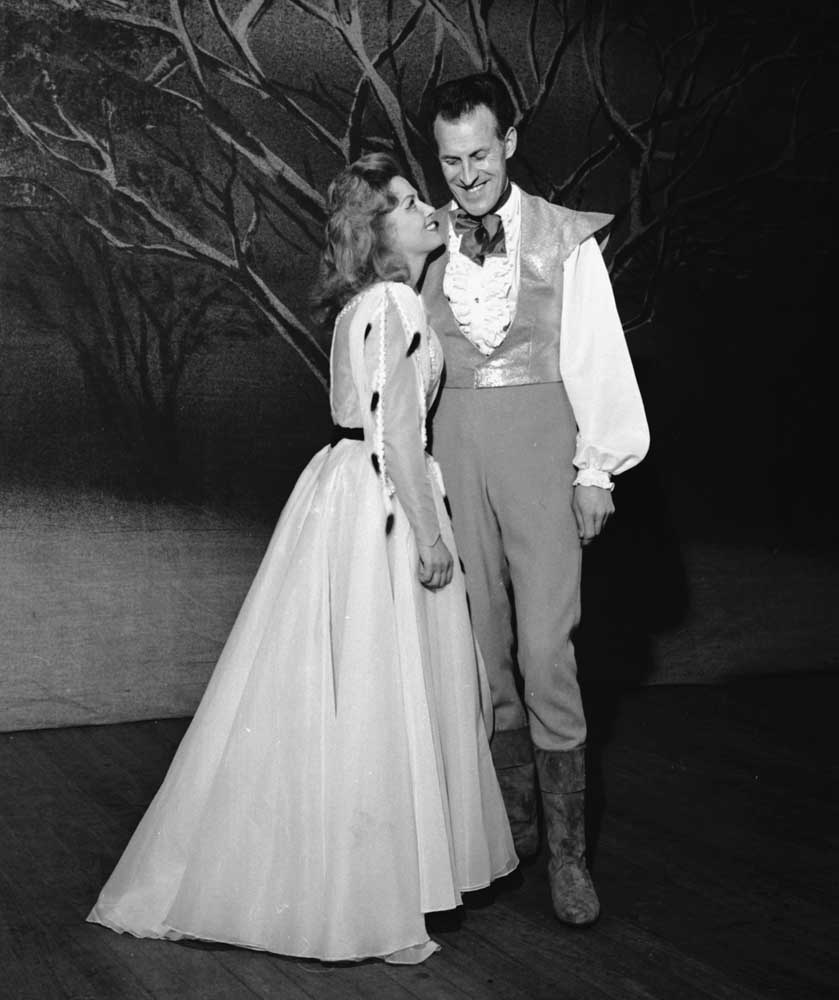 Bruce Forsyth was already a major star in 1961 when he came to Manchester to take the lead in Turn Again Whittington at the Palace Theatre.

He was the compere of theatrical impresario Val Parnell’s weekly TV variety show Sunday Night at the London Palladium from 1958 to 1964. Then, like Morecambe and Wise, he crossed to the BBC to present his own show.

In October 1968, Forsyth was back in Manchester to top the bill at the opening night of the Golden Garter nightclub in Wythenshawe. 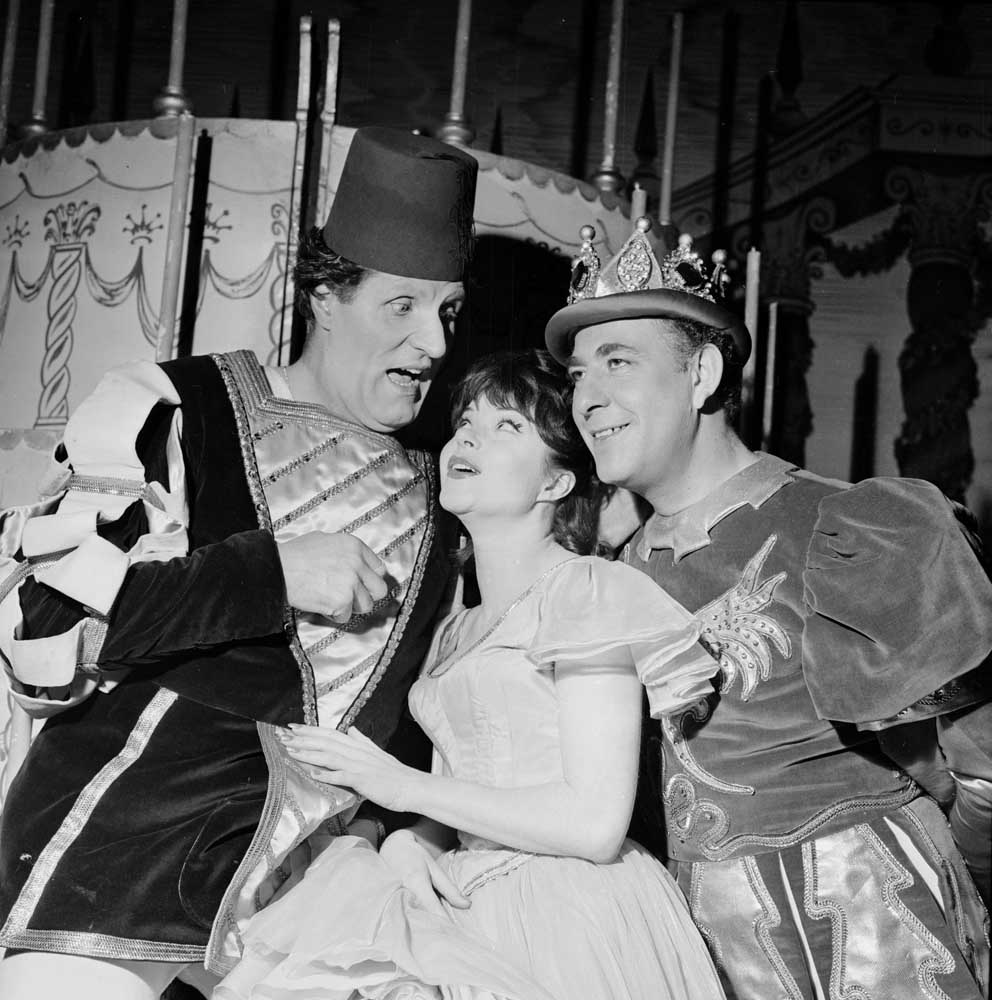 Film and TV comic Norman Wisdom was a frequent visitor to Manchester in the 1950s and 60s. In 1959, he appeared in Robinson Crusoe at the Palace Theatre and returned in 1964 in the musical The Smell of the Greasepaint, The Roar of the Crowd.

In 1956 he played the lead role in The Wonderful Lamp, an adaptation of Aladdin where the pantomime tradition of casting a female as the Principal Boy was abandoned.

Instead, Wisdom appeared as his gormless but endearing film character Norman, dressed in customary cloth cap and overtight jacket and trousers. Slapstick ruled, but the critics loved the result.

Cross-dressing in pantos may derive from the medieval tradition of the festival of fools where everything was turned topsy-turvy for a day or two. 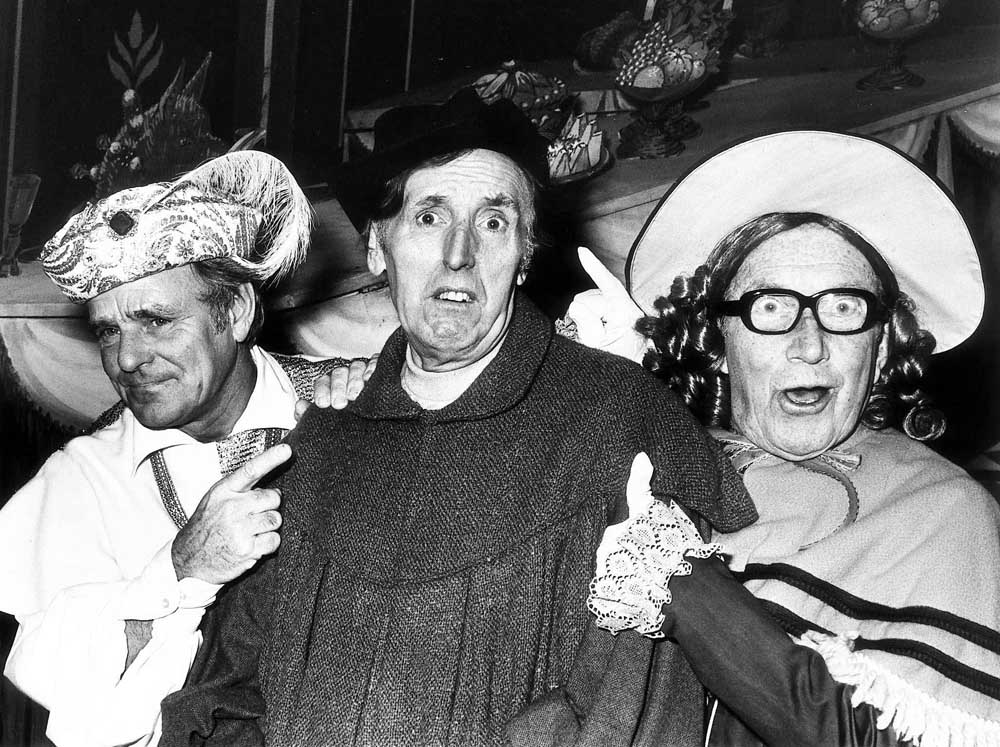 Dickie Henderson, Cardew Robinson and Arthur Askey in Babes in the Wood at the Palace Theatre, December 1976

It could also be a relic of the time when men played women’s roles as Shakespeare’s leading ladies were always men.

Pantomime itself dates back to classical theatre as well as the 16th century commedia dell’arte of Italy and British masques and music hall of the 17th century.

The first pantomimes were silent – hence the mime element of the title. Panto, incidentally, comes from the Greek ‘pan’ or ‘pant’ meaning ‘all’.

In another pantomime tradition, the good fairy or fairy godmother always enters from stage right and the villain from stage left. This is a throwback to medieval mystery plays where the right side of the stage symbolised heaven and the left side hell. 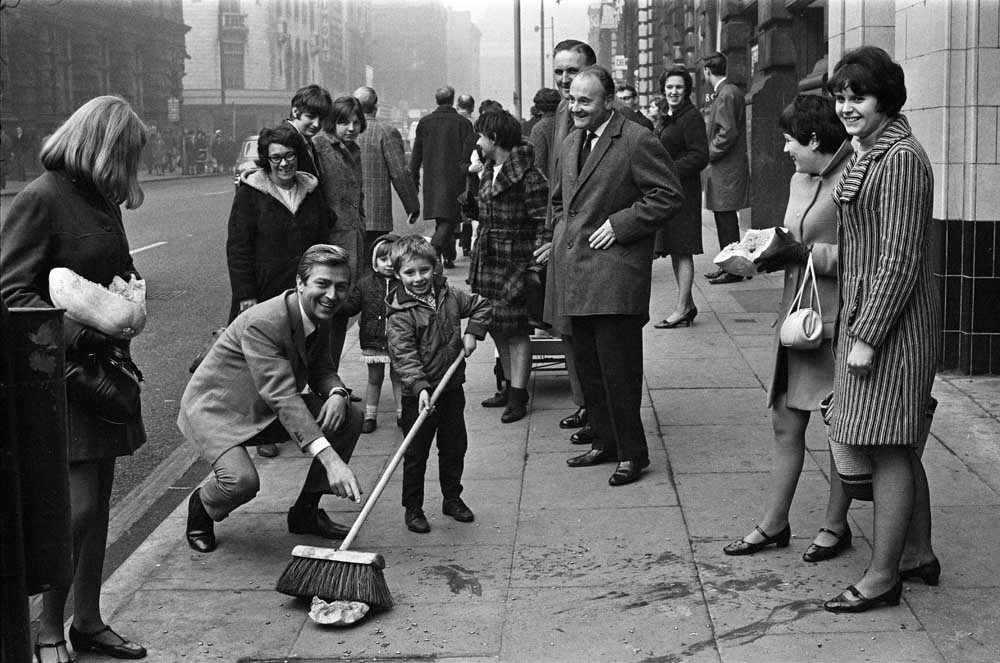 Volunteers help Des O’Connor clean up the pumpkin he dropped outside the Palace Theatre, November 1967

Singer and entertainer Des O’Connor was a bit of a villain himself when he dropped the prize pumpkin from the pantomime Cinderella on the pavement outside the Palace Theatre in Oxford Street in 1967.

Passers-by helped clear up the debris, but many couldn’t help thinking the accident had something to do with his single Careless Hands reaching No. 6 in the charts the same year!

Two years earlier, O’Connor was at the Palace Theatre again – this time starring as Buttons in Cinderella along with Manchester band Freddie and the Dreamers and Billy Dainty. 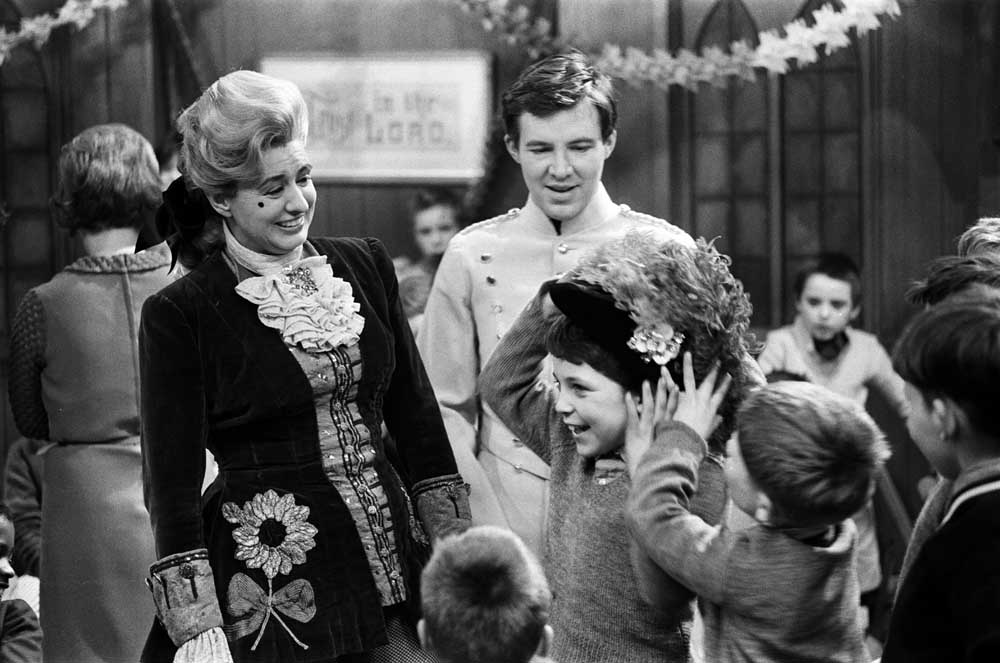 The Granada TV soap Coronation Street staged its own version of Cinderella in 1964 when the cast entertained children from the Wood Street Mission. Pat Phoenix, Elsie Tanner on the programme, played Dandini.

Comedian Tommy Cooper joined Alfred Marx and Shani Wallis in Old King Cole at the Palace in 1962, while singer Ruby Murray played Snow White in 1962. Her single Softly, Softly went to Number One in the charts in 1955.