Belle Vue, back in the day, well it had everything, and I mean EVERYTHING. 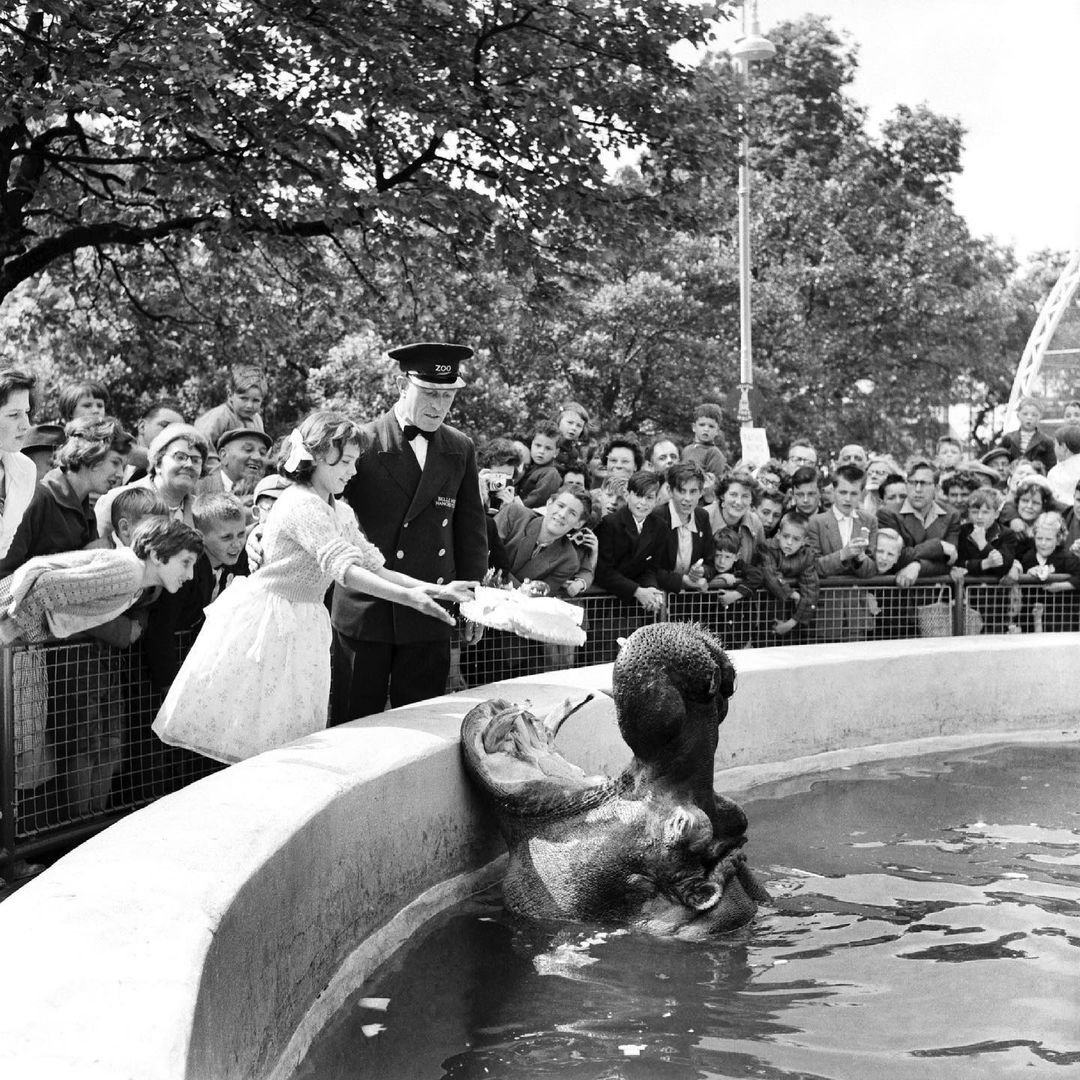 In fact, this particular hippo was called ‘Tony‘ and was actually acquired just after the First World War, part of a consignment of animals including monkeys, a dromedary and a zebra that were originally destined for government experiments with poison gas. 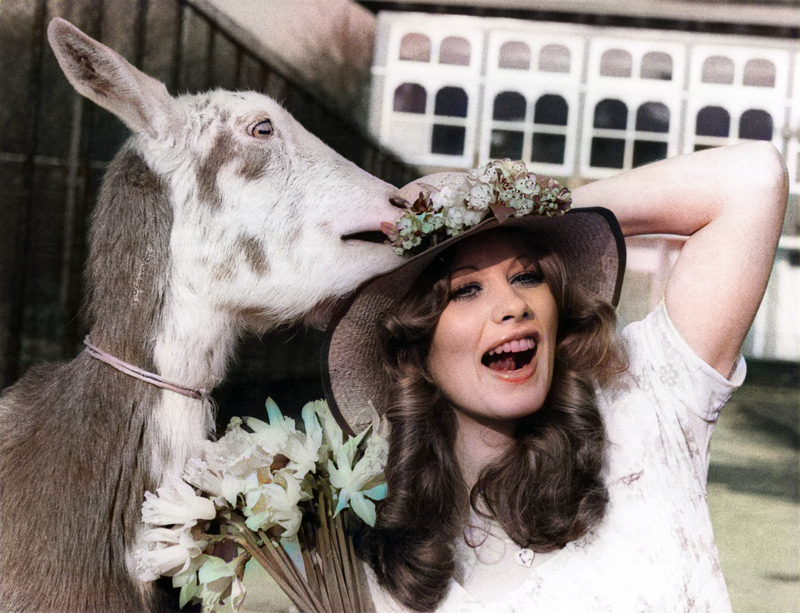 Tony was always a lone wolf amongst the other animals, until the bosses at Belle Vue Zoo decided to try their hand at a bit of matchmaking, and brought in a female, Gracie.

Their Cilla Black skills were on point too as a few years later Gracie gave birth to a son – Nicholas, who actually ended up killing his own mother – when one of his tusks managed to pierce her skull during a fight. It’s almost Shakespearean this. 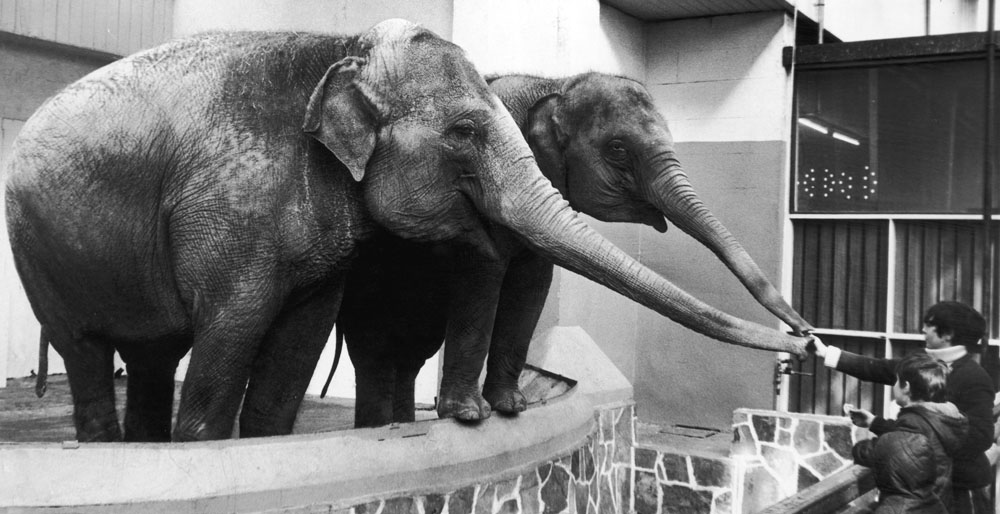 Anyway, Gracie’s skull is now at The Manchester Museum down on Oxford Road, so go and check that out if you’re interested, although they’ve probably got it in some box out the back and not on display for all to see.

Anyway, Tony, Gracie and Nicholas were just a small percentage of the impressive roster of exotic animals that could be found at Belle Vue Zoo, and indeed they were just a small part of what you could see and do down in this long-neglected part of Gorton. 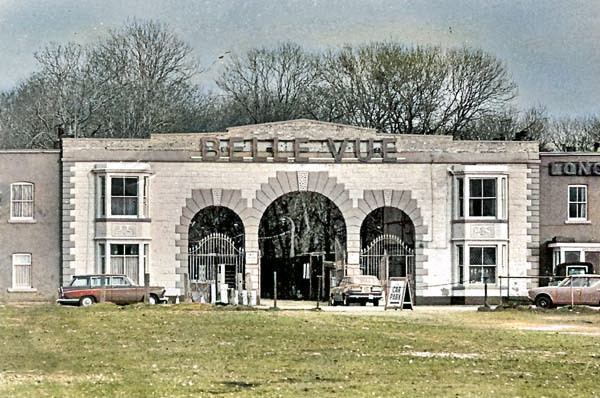 Belle Vue Zoological Gardens officially opened its doors back in 1836, a site designed and created by an entrepreneur and part-time gardener named John Jennison who wanted to provide a place for Manchester’s middle classes to escape the dirt, noise and pollution of the city.

He and his wife started out selling tickets for the public to walk around the grounds of his house in Stockport, and coupled with his gardening skills and his love of birds – he started making a fair bit of money out of it.

It wasn’t long until he was approached to lease out the site down at Belle Vue, and so he re-mortgaged his house and set off down Hyde Road with just his small selection of belongings and three birdcages. Within 5 years his collection would be much, much bigger. 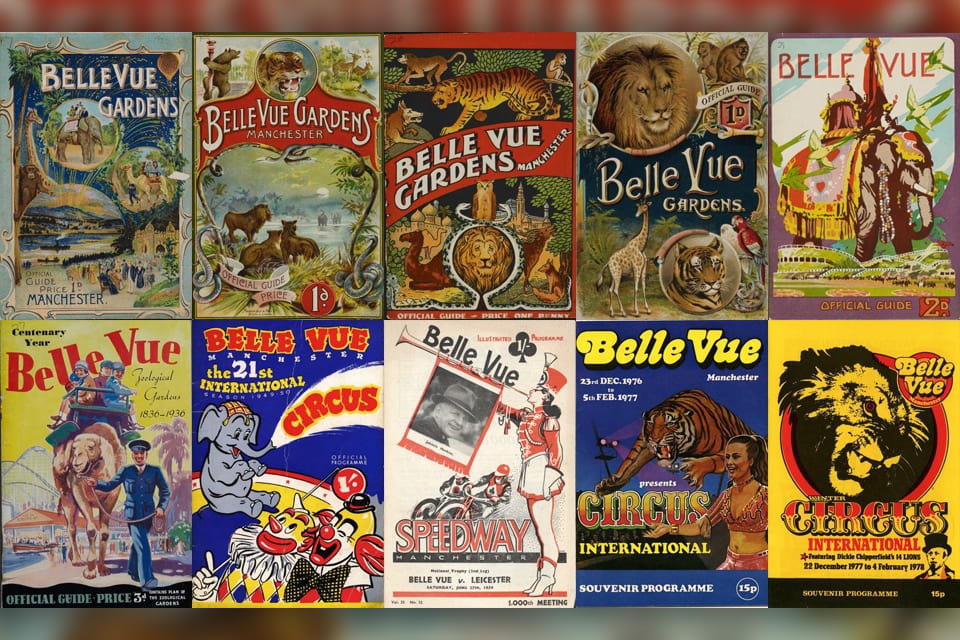 On the first day it opened in 1836 Belle Vue consisted of an Italian Garden, lakes, mazes, a hothouse and the aviary, but by the turn of the decade this had grown to include the zoo which contained lions, elephants and a host of other ‘exotic’ African and Indian animals from across the British Empire.

John then added a racecourse in 1847, an additional lake called Firework Lake which featured an island in the middle with a natural history museum on it, and later – The Great Lake opened in 1858 which featured two paddle steamers that would take 100 passengers on a trip around the circumference for just 50p. 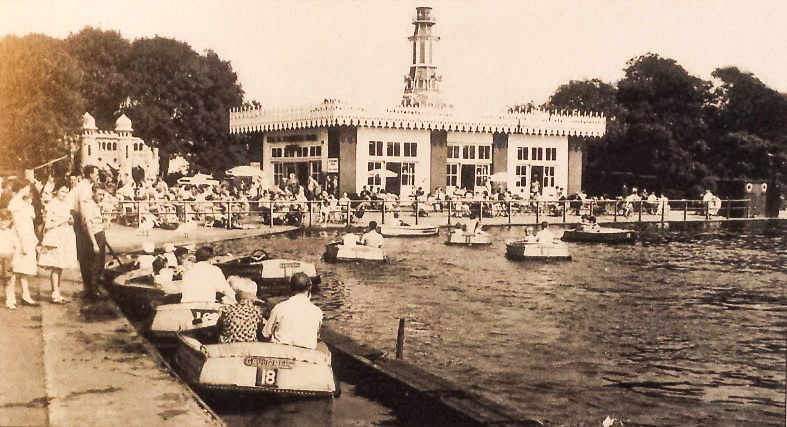 By the mid 1850s, the zoo was on its way to becoming the third-largest in the UK, with kangaroos, rhinos, lions, bears, gazelles, and giraffes, not to mention the acquisition of a certain chimpanzee – Consul – who always wore a smoking jacket and a cap and even smoked a pipe. Consul ended up accompanying John’s son James on business meetings until his untimely death in 1894.

Quick not to let this set him back, James subsequently found a replacement for Consul – imaginatively named Consul II – who was able to play the violin while riding a bicycle around the park. 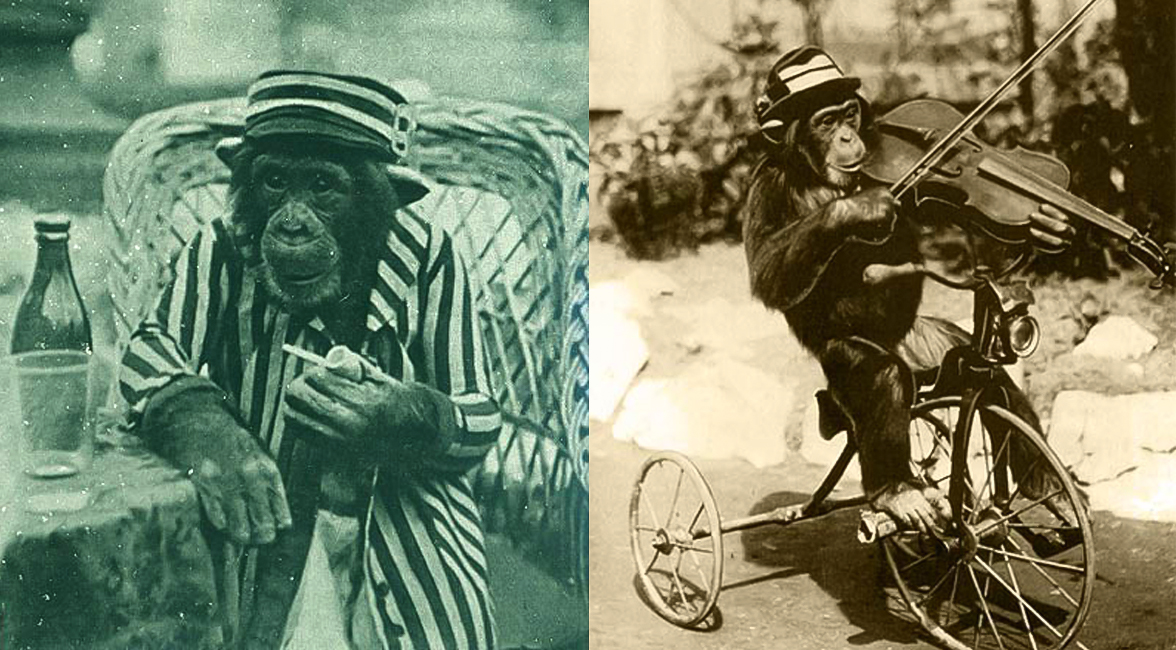 Consul I and Consul II

It’s around the end of the First World War when the zoo got even more animals (including the hippo), and by the turn of the Second World War the zoo included Indian elephants, a brown bear called ‘Frank’, monkeys, gibbons, reptiles, tigers, a cheetah and two ‘tigons’ – which is what happens when animals are looked after by people like Joe Exotic.

A particularly embarrassing and frankly atrocious note in the zoo’s history occurred in 1925 when a new display was created entitled “Cannibals” – one which shamefully featured black Africans depicted as savages.

During the war, keepers were assisted by soldiers to keep the ‘dangerous’ animals in check and ensure that if any bombs hit the zoo that they’d not escape and maul some poor sod on his back from the bookies. 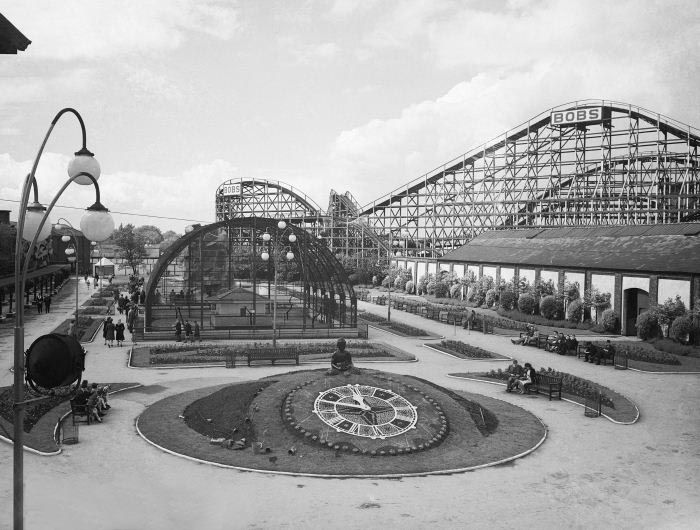 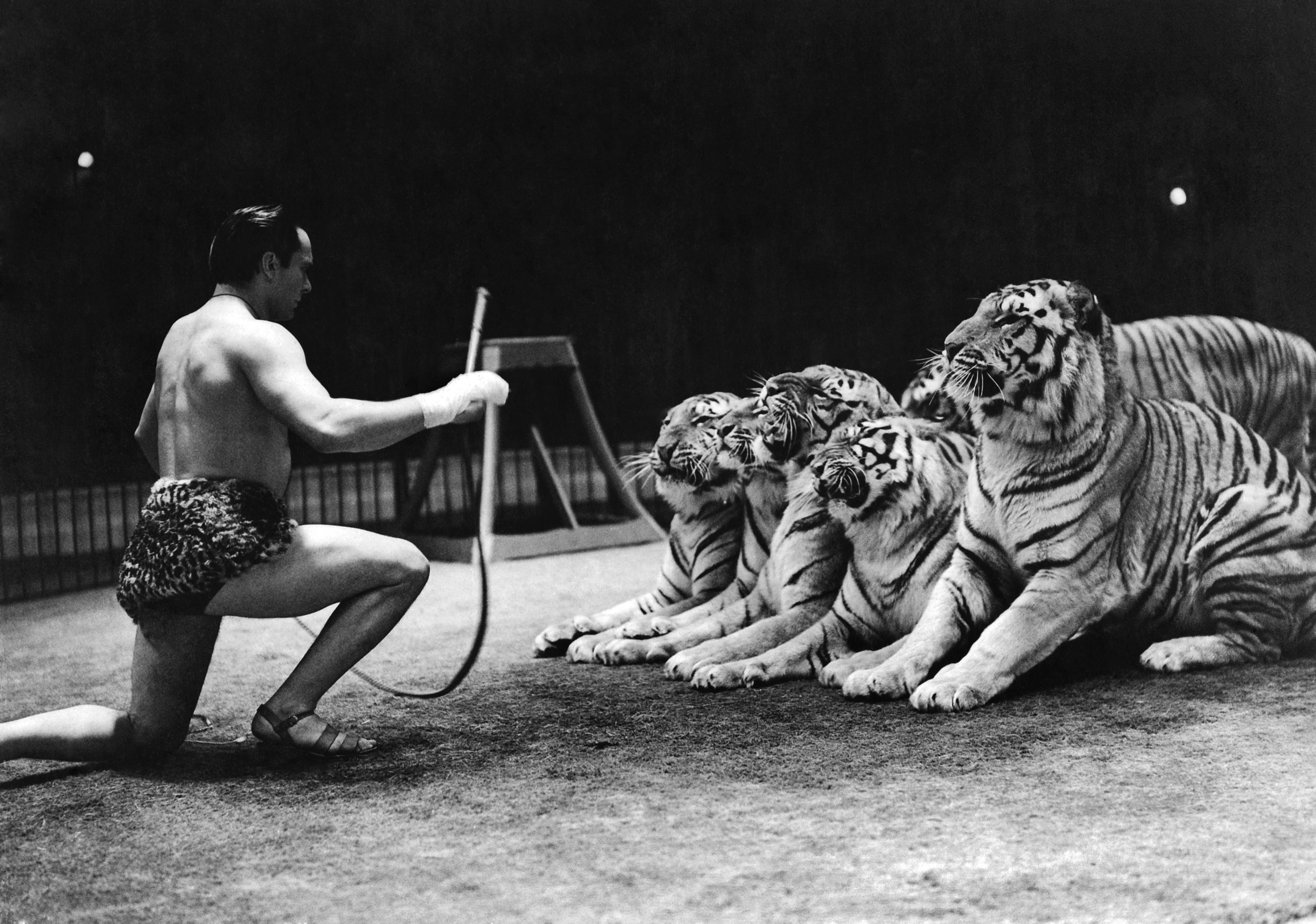 They were even armed with Tommy Guns just in case they got out, but with war time rationing what it was – I doubt the animals would have had the energy to bother running off if they had the chance.

By the early 70s, it seemed that the owners had lost interest in the zoo, probably due to spiralling costs and an increased public knowledge and responsibility with regards to animal welfare.

The Zoological Gardens closed on 11th September 1977 after losing around £100,000 a year for more than a decade. The animals were re-homed around the world and the people of Manchester seemingly felt a wave of indifference to the news overall. 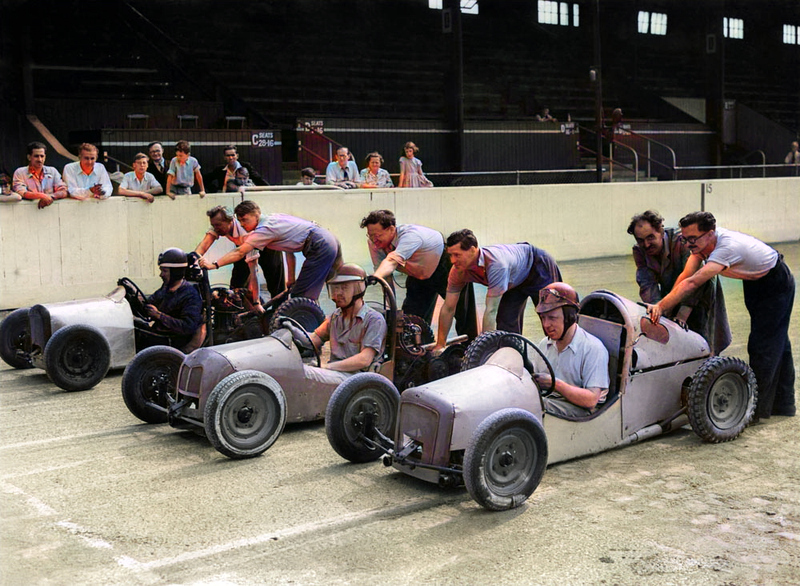 As I mentioned at the beginning of the article though, there was A LOT more going on at Belle Vue than just a zoo. It was home to an athletics and football stadium, that also hosted a Rugby League team in the 1930s and featured the first ever Anglo-Australian Test Match.

There were regular wrestling contests that started in the 30s and finished in 1981, typically watched by over 5,000 spectators week-in, week-out. Popular performers at Belle Vue included Giant Haystacks and the legendary Big Daddy, who were firm favourites amongst older women, who would sit in the front row knitting, only stopping to jab their most despised wrestler in the feet with their needles as they got close. 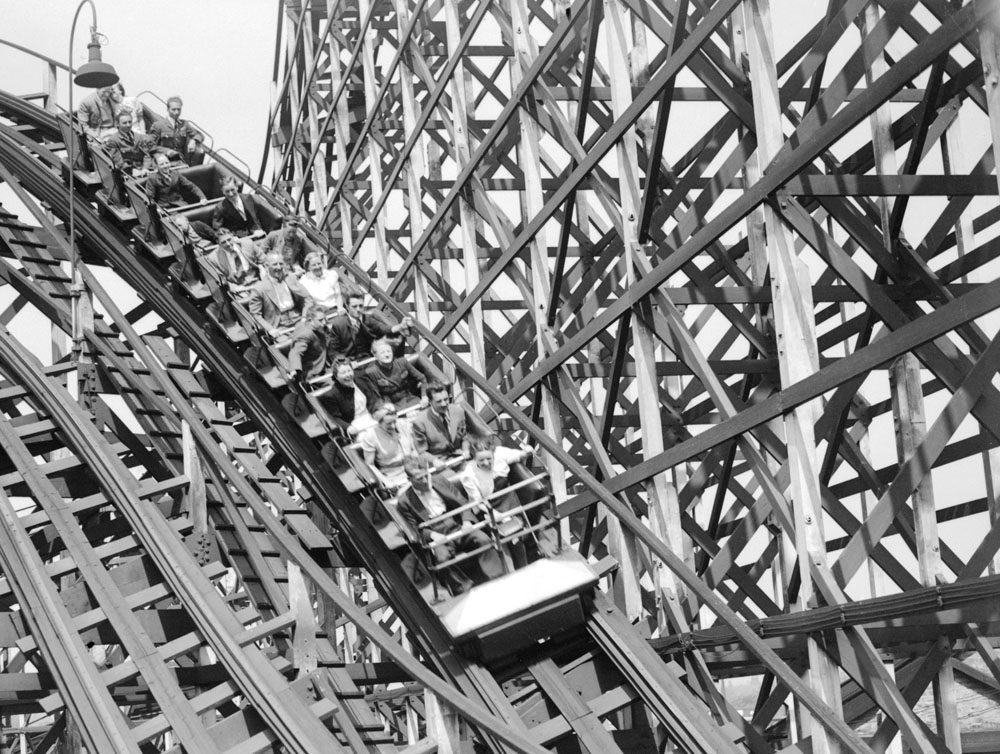 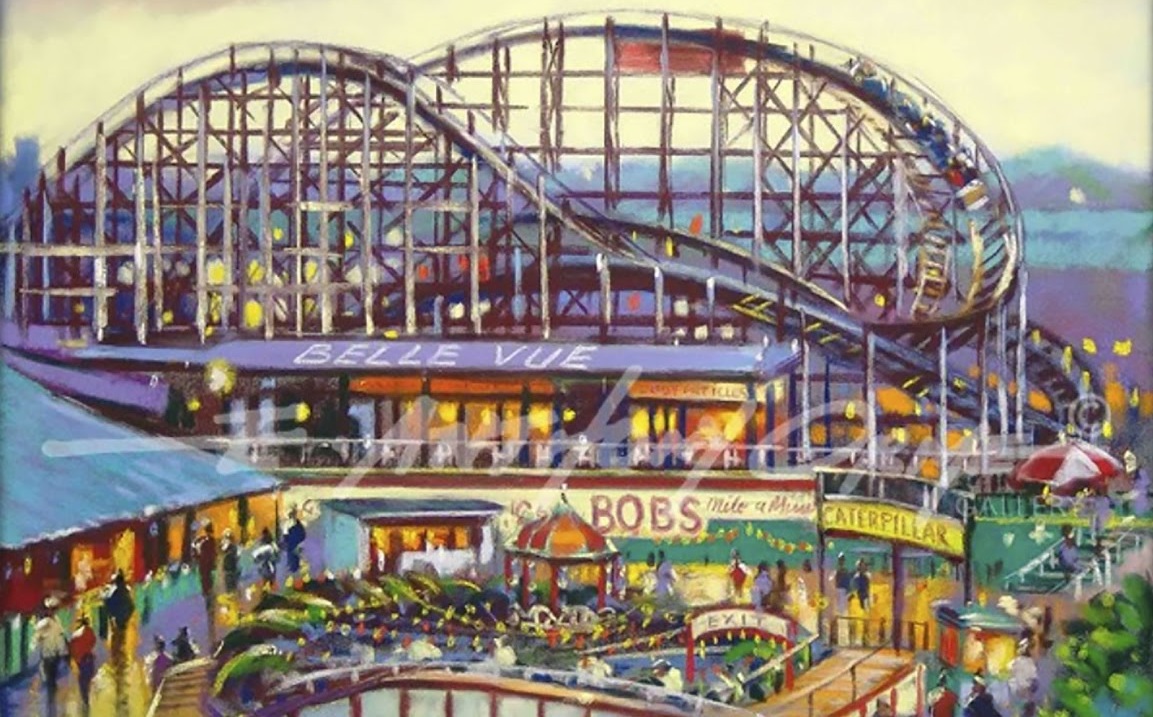 There was also an amusement park, featuring a range of new and exciting rollercoasters, most popular of which was ‘The Bobs’, so named because it cost a shilling for admission and flung you down an 80ft drop at 60mph.

Belle Vue was also home to one of the UK’s last ever Flea Circuses – operated by “Professor” Len Tomlinson from a small booth near the rides in the 60s and 70s. Apparently the circus consisted of harnessed fleas (from humans) racing chariots, pulling a lawnmower, riding a tricycle and even fencing! I always thought those things were just mechanical fakery – obviously not. 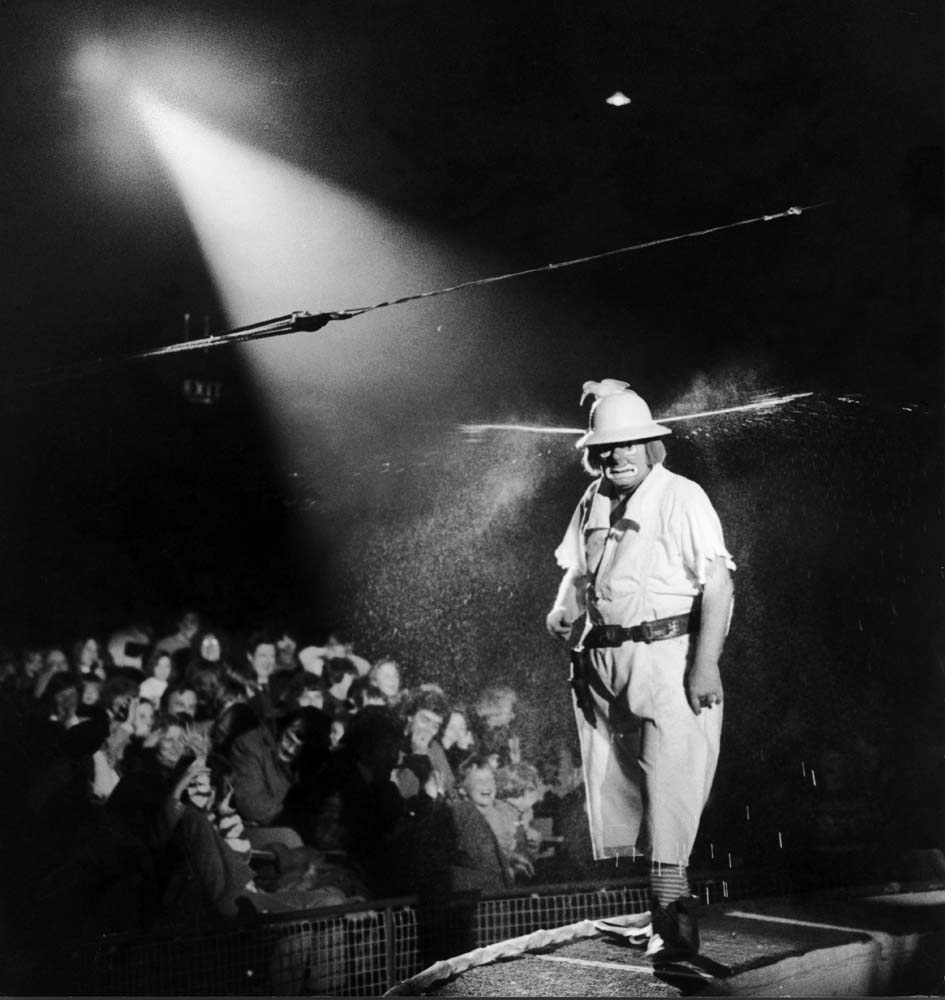 There was also a regular circus here, which was overseen by ringmaster George Lockhart for 43 years, as well as firework displays, and a live music venue that played host to come of the biggest stars of the 20th Century, including Jimi Hendrix, The Who and The Rolling Stones.

Finally, and I’ve probably missed LOADS out, Belle Vue was home to a speedway, where mad fellas would spin around a track on dirt bikes, as well as a greyhound stadium, which was introduced in 1926 and remained right up until the whole place closed for good a few years ago. 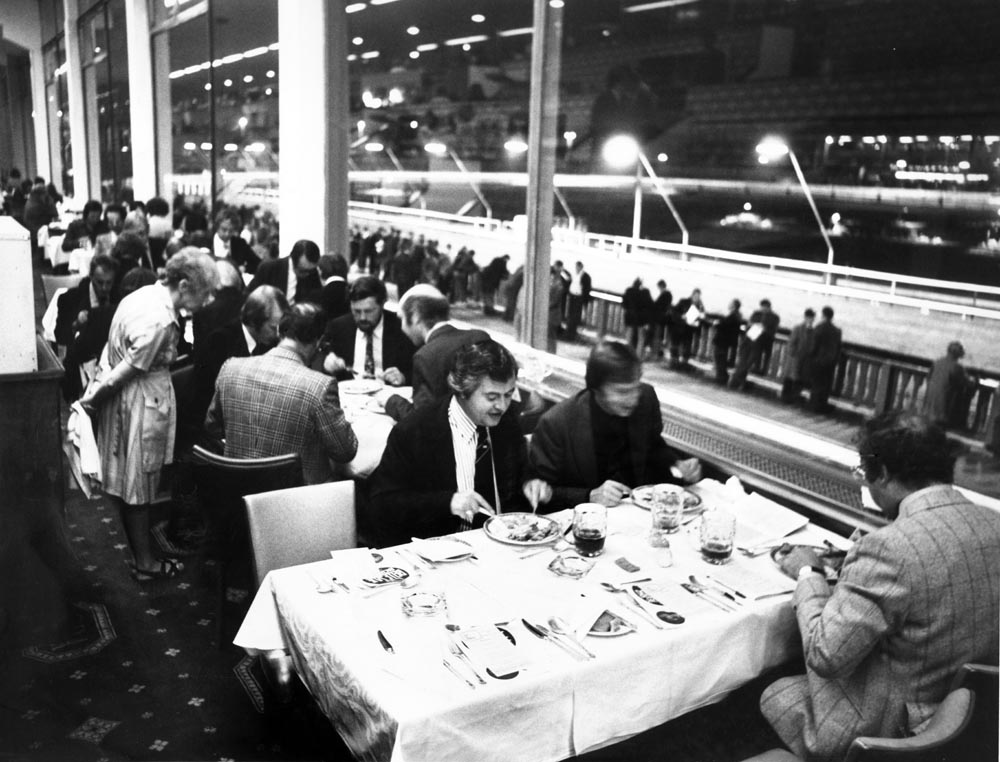 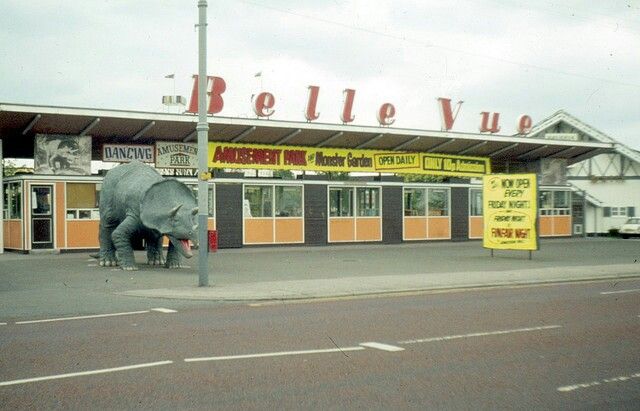 I remember heading over to watch the dogs back in 2005 and having a right good night of it – drinking too many pints of cheap cider, scoffing loads of chips and losing a ton of cash on the races. I ended up just betting on which dog would take a shit first at the end – and I was still rubbish at that.

It was all that was left of the site by then, along with a little snooker club and nearly 200 years of memories and truly mad stories. At one point, Belle Vue was the entertainment capital of the UK, perhaps even the world – but now – well, it’s just a load of empty ground now. 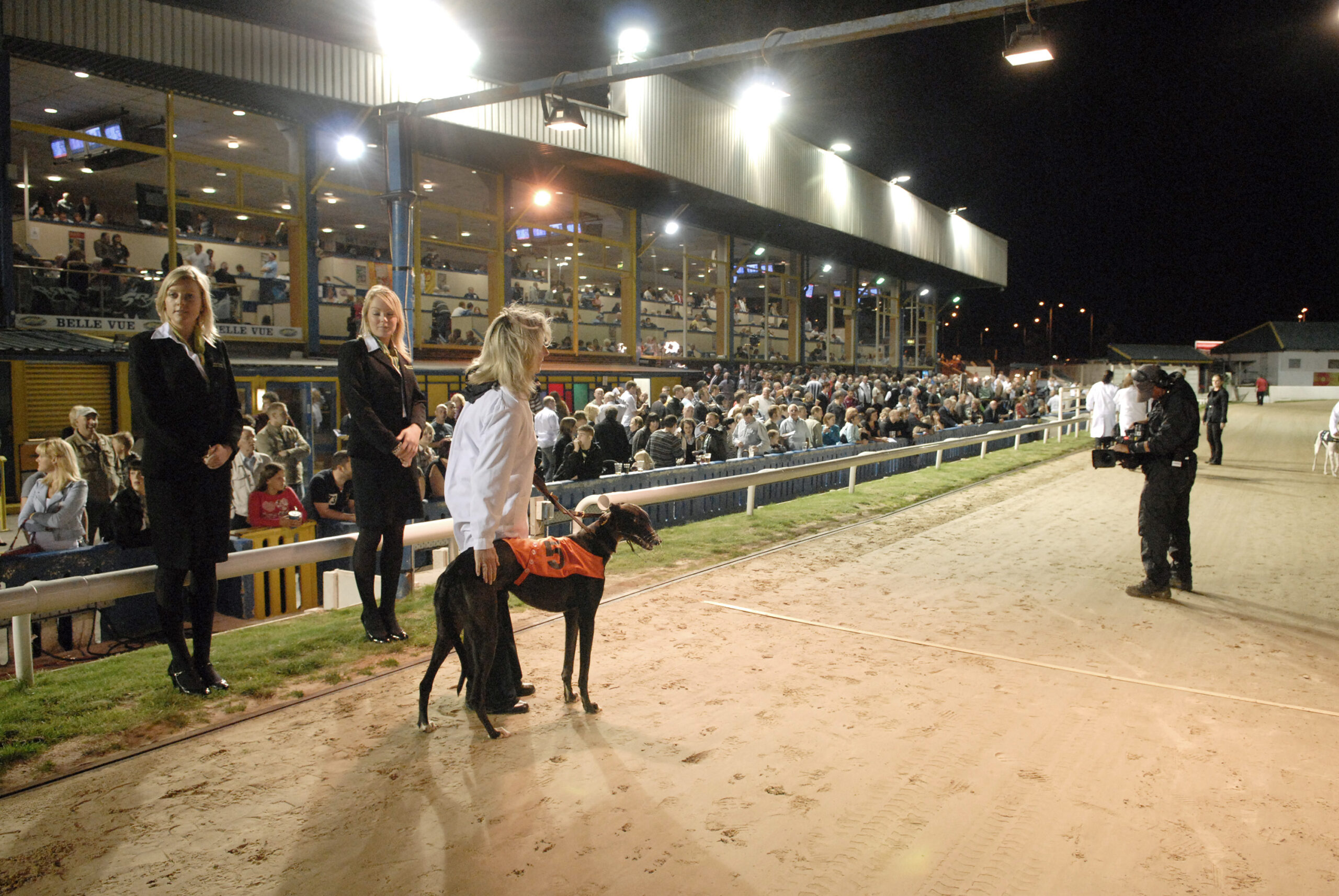 Efforts have been made in recent years to bring a bit of glamour and entertainment back to the area, but with a failed bid at a ‘super casino’ which were all the rage about 15 years ago – it doesn’t look rosy for Belle Vue’s future.