One of the most important landmarks in UK political history is ready to welcome visitors again after more than a year out of service. We lift the lid on what visitors can expect. 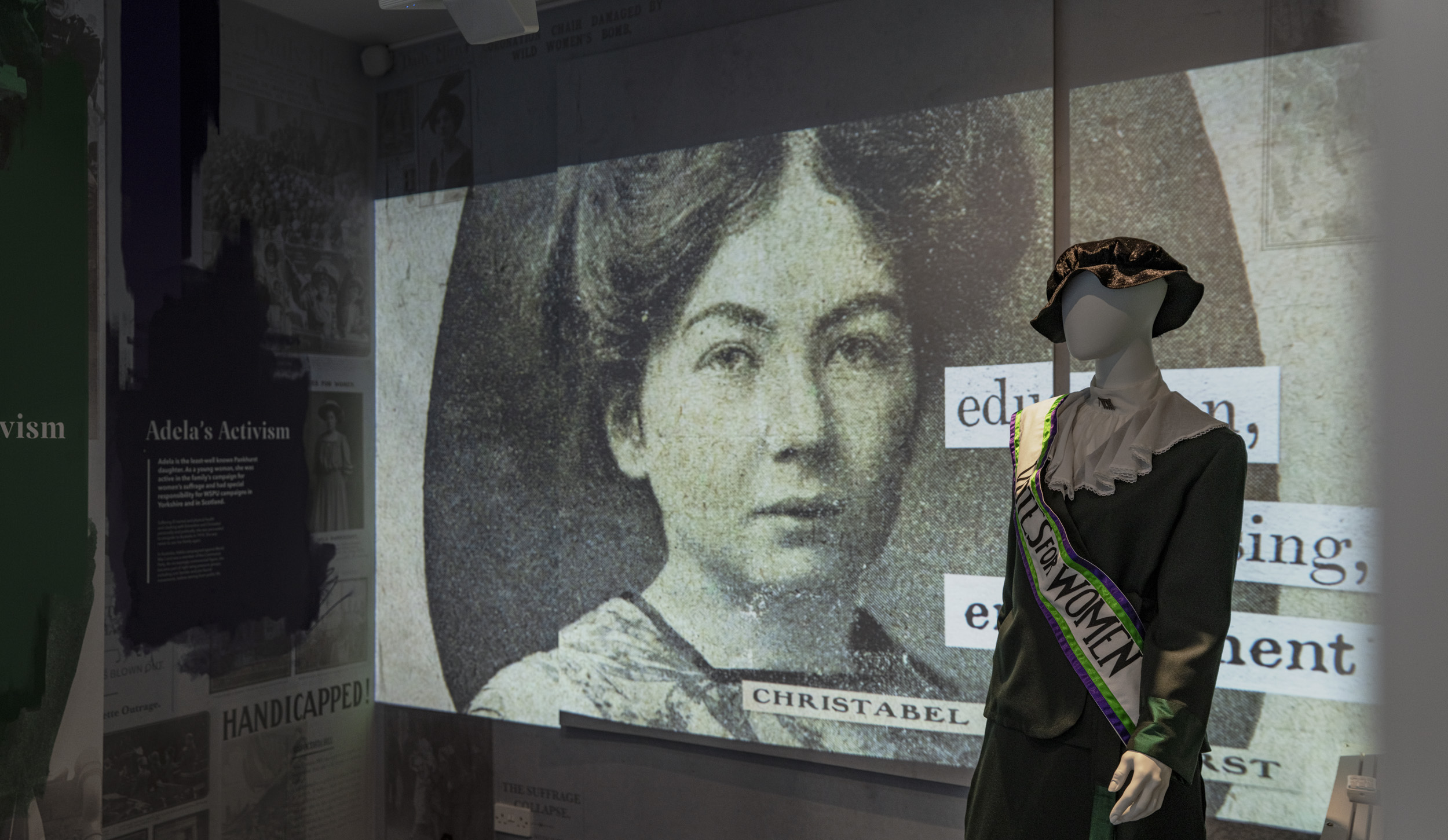 Today marks Women’s Equality Day. Commemorating 26th August 1920, when women’s right to vote became part of the U.S. constitution after seven decades of campaigning, to celebrate Manchester’s Pankhurst Centre is reopening to the general public for the first time since last March.

For those who don’t know, the address — 60-62 Nelson Street, Rusholme — was the family home of Emmeline Pankhurst. Responsible for organising the UK suffragette movement, securing the right for British women over 30 to vote by 1918, and all women over 21 by 1928, she is widely regarded as one of the most significant activists in this country’s political history. She helped change culture and power structures, hence her statue in St. Peter’s Square.

A new exhibition — At Home with the Pankhurst Family — marks the reopening, put together by design consultancy Mather & Co. The firm’s work already includes the R&A World Golf Museum, National Coal Mining Museum, St Alban’s Cathedral, and the History Room at Paris Saint-Germain football club. Adding to that storied resume, visitors are now invited to explore the way things were at the time Pankhurst was here, with three rooms reimagined to honour this icon of equality. 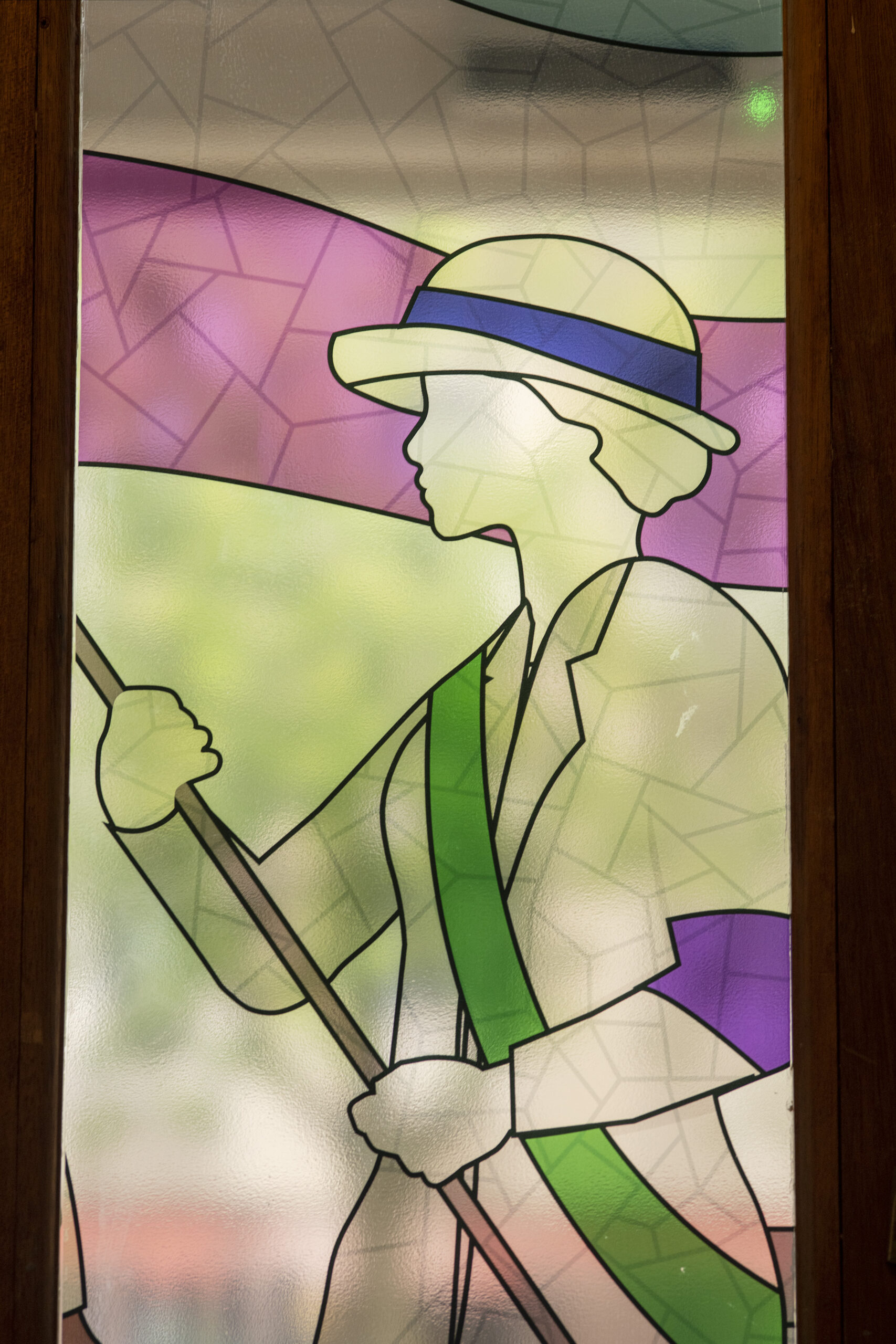 Stained glass in a hallway door at the Pankhurst Centre

The result is a deeper understanding of both the woman herself and the Woman’s Social and Political Union [WSPU], the militant organisation fighting to win votes for women, which first met in one of the exhibition spaces.

Sarah Clarke, Managing Director at Mather & Co, explains how important this undertaking is for the company: “With such a pivotal story in women’s history, to be able to tell the Pankhurst and WSPU’s story has been an absolute privilege. The exhibition is an inspiring and moving experience that shares a unique insight into the lives of the family.” 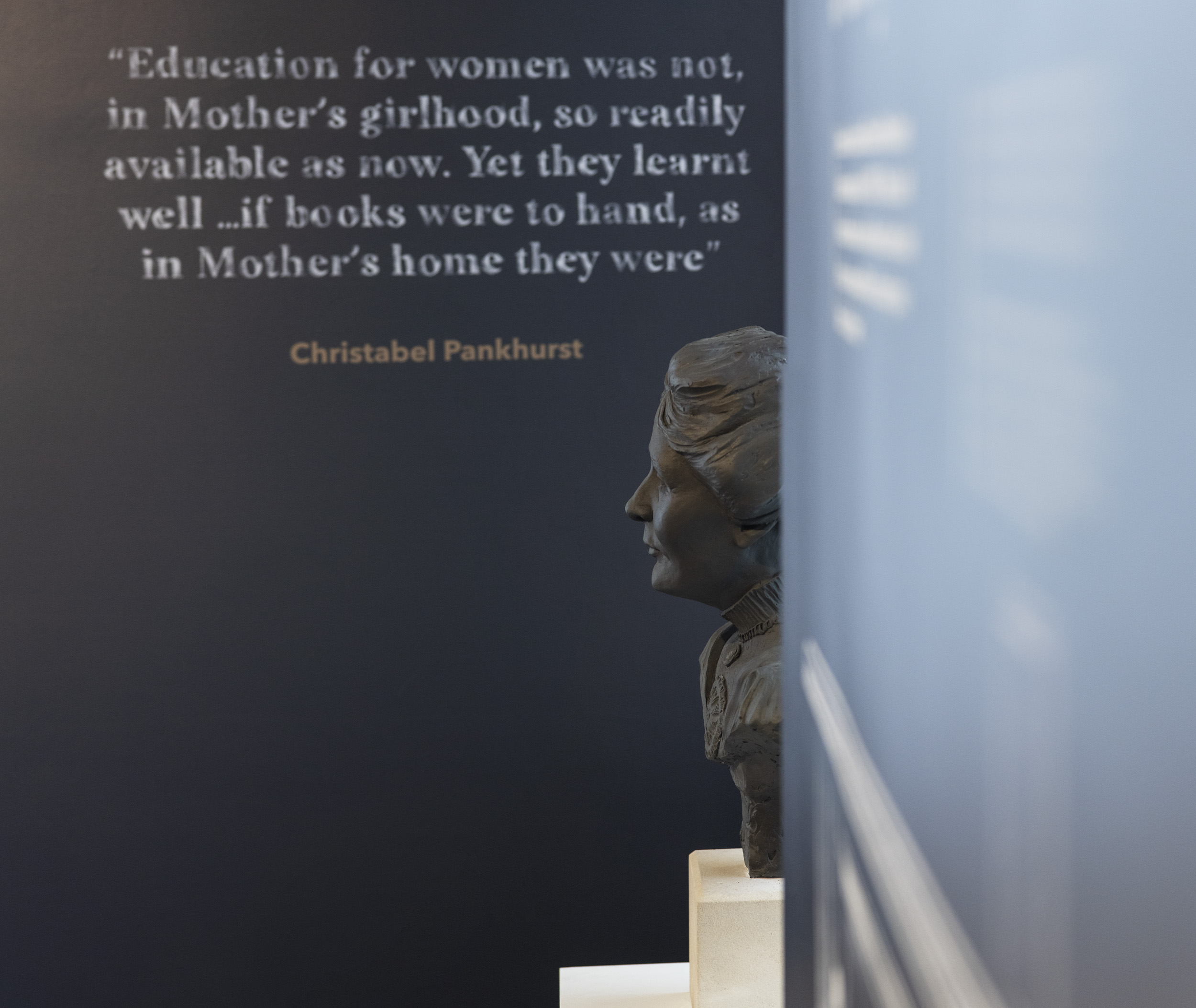 A quote by Emmeline’s daughter, Christabel Pankhurst, in the Pankhurst Centre

Leanne Clydesdale is Project Interpretive Designer at Mather & Co, and revealed a details about what the new offering involves. “[A] rebellious, challenging exhibition which takes a fresh look at the Pankhurst family and the Women’s Social and Political Union,” she replies. “[The exhibition] reveals some of the lesser told stories about relationships within the family.

“It leads the visitor through the different aspects of their lives that influenced how they became leaders in activism, such as their interest in politics and experience working with women,” Clydesdale continues. “Visitors can explore Emmeline’s desk to see all the roles she took on as a mother, volunteer, registrar and more. They can find out more about the three Pankhurst daughters and what their hopes and dreams were whilst living in this house.” 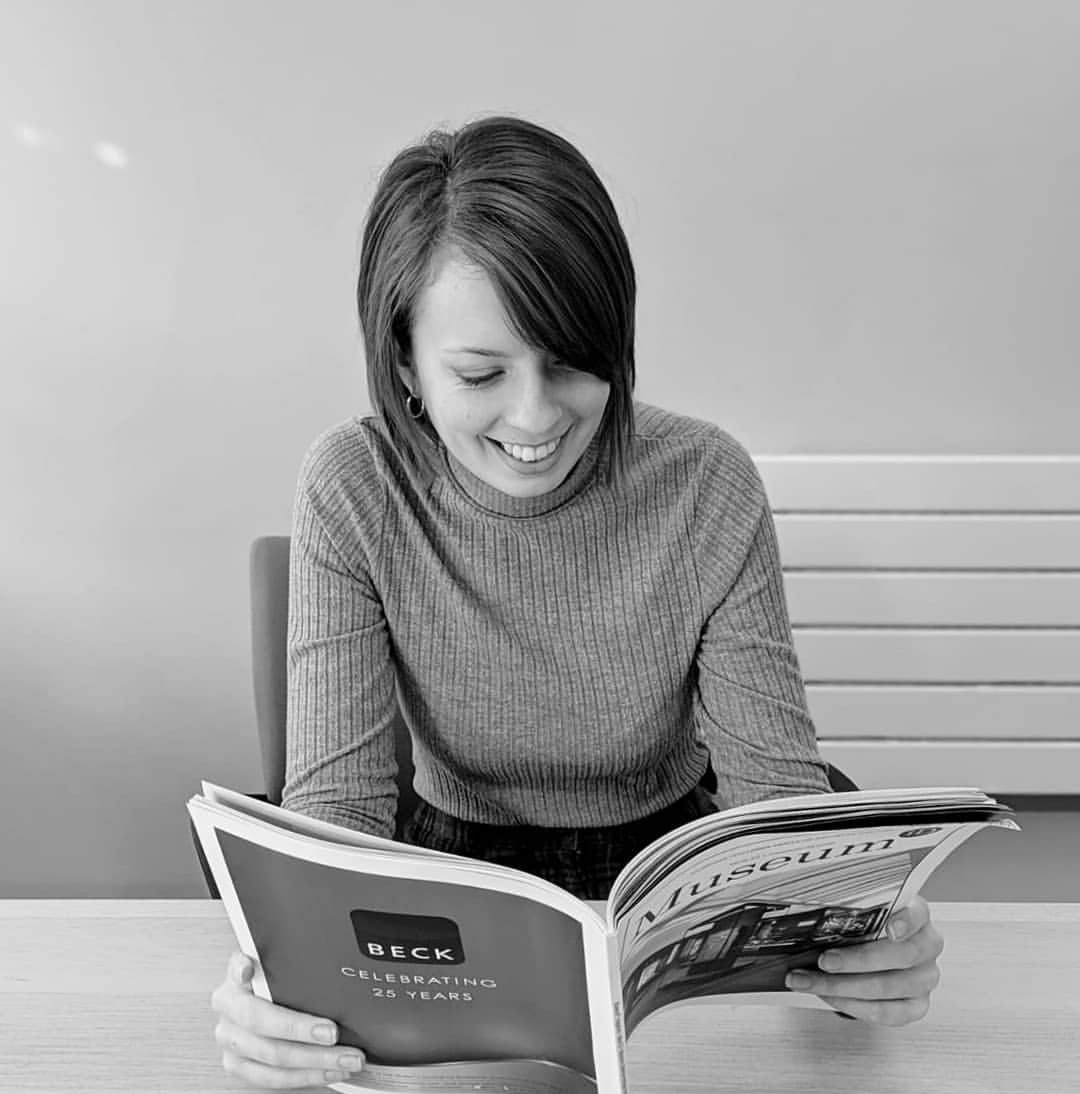 The exhibition also features immersive elements, giving audio-visual insights into the perspectives of the Votes for Women movement. Although ultimately everyone was pushing for the same thing — women’s right to a voice — there were differences. One example being the Suffragists and the Suffragettes: the former committed to peaceful reform, the latter engaged in direct action.

In many ways, conflict would also prove useful to the movement. World War I devastated Europe, with millions of men losing their lives. During this time, as in World War II, women were brought in to fill vacant roles in Britain. The result was tangible evidence they could do the same jobs as men, often better. Interestingly, and lesser-reported, is the way this also galvanised women’s football.

The 1914-15 season was the last men’s FA league to take place before a wartime break, with many criticising the competition, teams, and players for standing in the way of the war effort. Munitions factories up and down the country had already switched to female employees by this point. Known as ‘munitionettes‘, they were encouraged to stay healthy and fit for work by playing football. 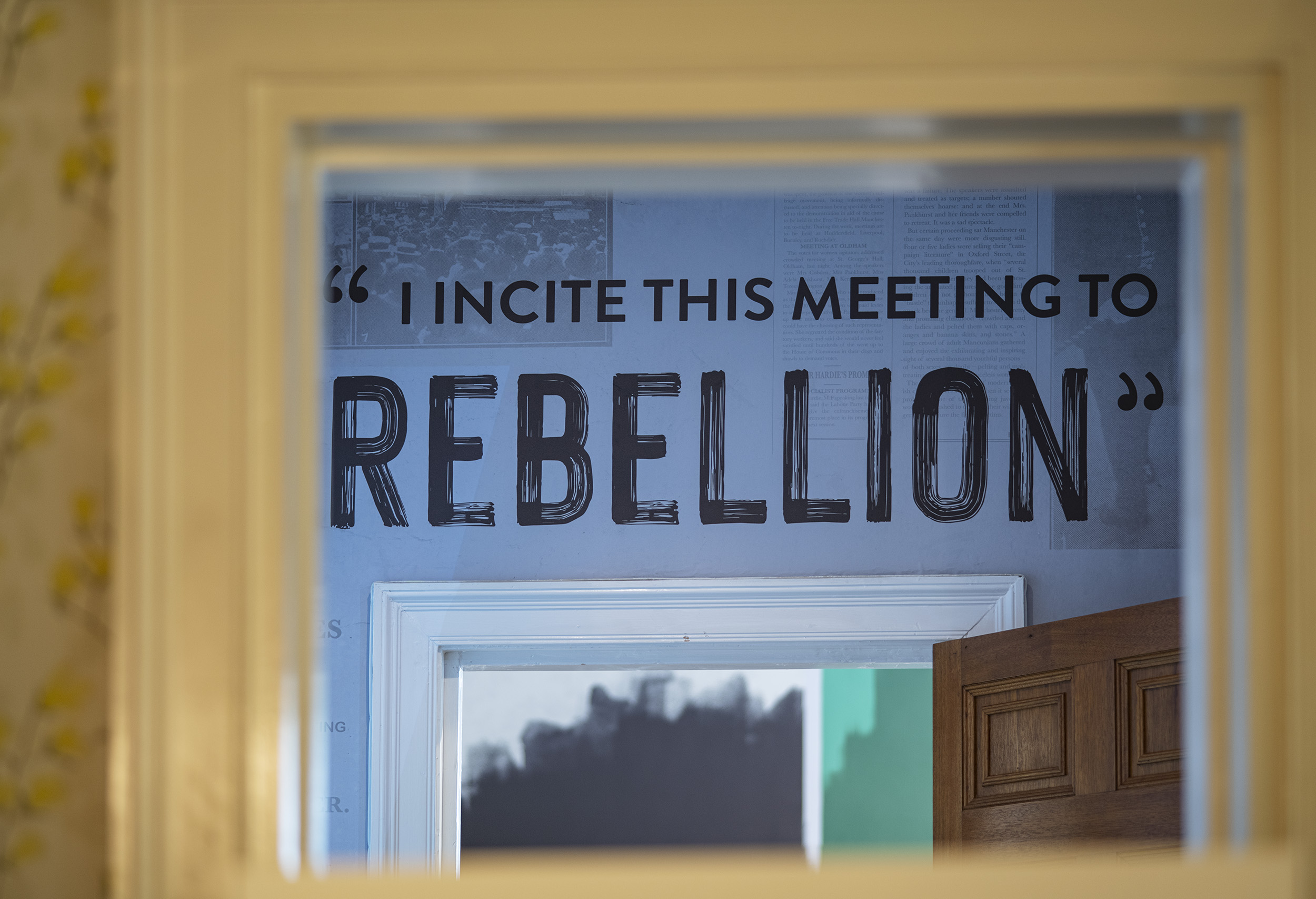 Remarkably, many of those games drew bigger crowds than their male equivalents had in the past. While this doesn’t feature in the Pankhurst Centre, Clydesdale is quick to point out tales like these remain relevant today, despite the fact they are more than a century old. “The exhibition brings the story up-to-date and shows how women’s activism still continues today.

“It certainly won’t be what the visitor expects from a domestic house exhibition – we have taken the methods of agitation that the Suffragettes used, such as chalking, painting, smashing glass etcetera, and used those to put a twist on how the rooms tell the women’s story,” she says. “We transformed the spaces with new graphic wallpaper, fixed structures within the space, and added carpeting. Each room has received new audio-visual technology which supports in telling the story. Our graphic designer also produced a beautiful mural piece, which can be seen on the entrance doors.”

Manchester to adopt Net Zero Carbon for ALL New Buildings?