The Refuge ‘Come As You Are’ Weekender August Bank Holiday 2019

The Refuge’s 4th Come As You Are Weekender is back this August Bank Holiday weekend – bigger and brighter than ever before.

The celebration of music and love will commence on Friday 23rd August with an official launch party for three days and three nights of parties, culture and special guests. Here’s what’s in store…

Come As You Are will officially launch on the Friday with DJs in the Public Bar from 5pm – 1am. Starting the party is Abs Ward followed by Claud Cunningham and Kim Lana.

Taking to the stage for an unforgettable performance, is the all-male voice choir, The Sunday Boys. Their captivating recitals will unite the Public Bar revellers, setting the tone for the Come As You Are party weekend.

Come As You Are then descends into the Basement as Superbia host a celebration in homage to the diversity and creativity of the LGBT+ community, with a film screening of Beyond: ‘There’s Always A Black Issue Dear’ with a Q&A to follow. Director Claire Lawrie joins to talk about this extraordinary film, which charts the Black British LGBT+ experience.

Register your attendance for FREE

To follow, an unforgettable queer party for all with the Horse Meat Disco Pride Party with early tickets entry start from £11.25.

On Saturday there will be a specially selected line-up of DJ’s and promoters playing in the Public Bar and the Courtyard from 2pm. From Manchester’s best queer and alternative clubbing scene, these include Philippa Jarman, Disco Mums Vs Edit.presents Jaegerossa & Grant Holmes, DJ Paulette, Claud Cunningham, High Hoops and more.

Saturday in the Basement sees Superbia bring DEEP IN VOGUE to Manchester from 9pm. A first for the city, this docu-film chronicles the explosive vogue renaissance in Manchester and the North West, featuring vogue house mothers and members of Manchester’s voguing scene as they prepare to compete in the Manchester ICONS Vogue Ball.

Meet the filmmakers and cast and see epic performances from House of Ghetto with a full-on after-party of voguing and music from DJs Jae & Night and Lil’Fee & Veba, for what is set to be yet another one of The Refuge’s legendary basement parties.

Moving on to the Sunday session, Homoelectric will take over The Refuge Courtyard for a final Come As You are celebration and a queer party for all.

The message is love from 2.30pm – 10pm as resident DJs Jamie Bull, Gina Breeze, Will Tramp & Lukas are joined by friends Blasha & Allatt and Kiss Me Again bringing Homoelectric’s eclectic style and sass to the city.

The Public Bar will host the Sunday afternoon party indoors, from 2pm with Sally Rodgers, A Man Called Adam and REETA Vs Marco Giannini.

Once the sun goes down Sprechen and Supernature Disco host the Come As You Are closing party – one that is not to be missed – with their resident DJ’s in the Basement, featuring Massey, BB, Rob Jones, Reeshy, James Greenwood and Richie V.

Come As You Are Weekender @ The Refuge 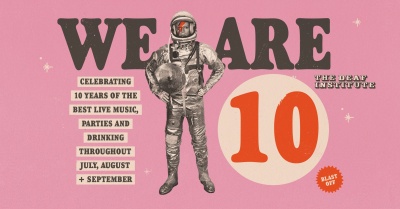