When I was trying to arrange a get together with painter Rob Pointon I suggested that I meet him at his studio and immediately realised my mistake. 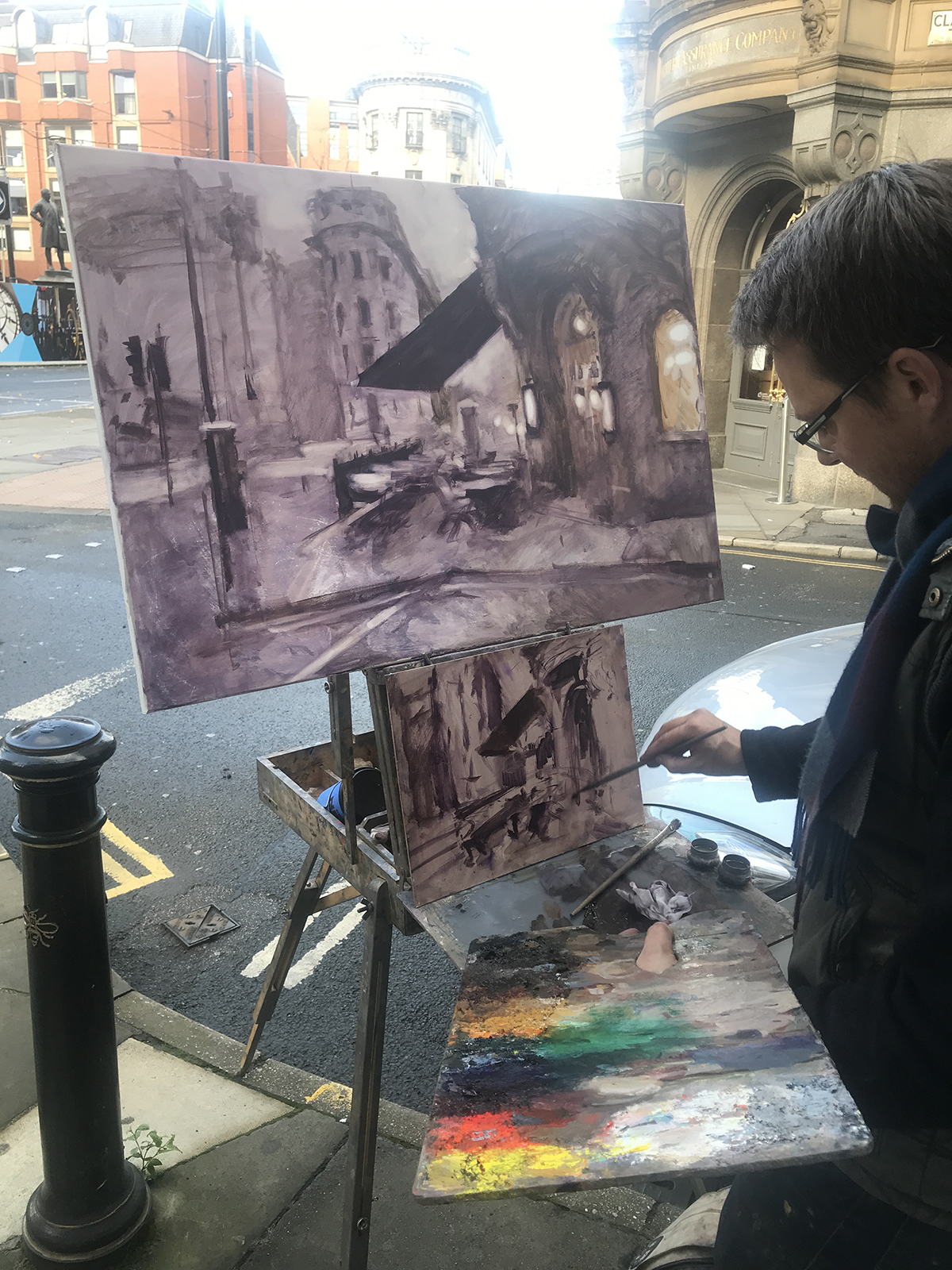 Because Rob paints plein air – in the open air. His studio is the outside. And the outside – these days – takes him around the world. Although, he says, “The City of Manchester is my regular office, my daily commute.”

I’ve long admired Rob’s paintings and so I arranged to meet him not in a studio, but in his plein air office. In Albert Square at the junction of Clarence Street and Princess Street. 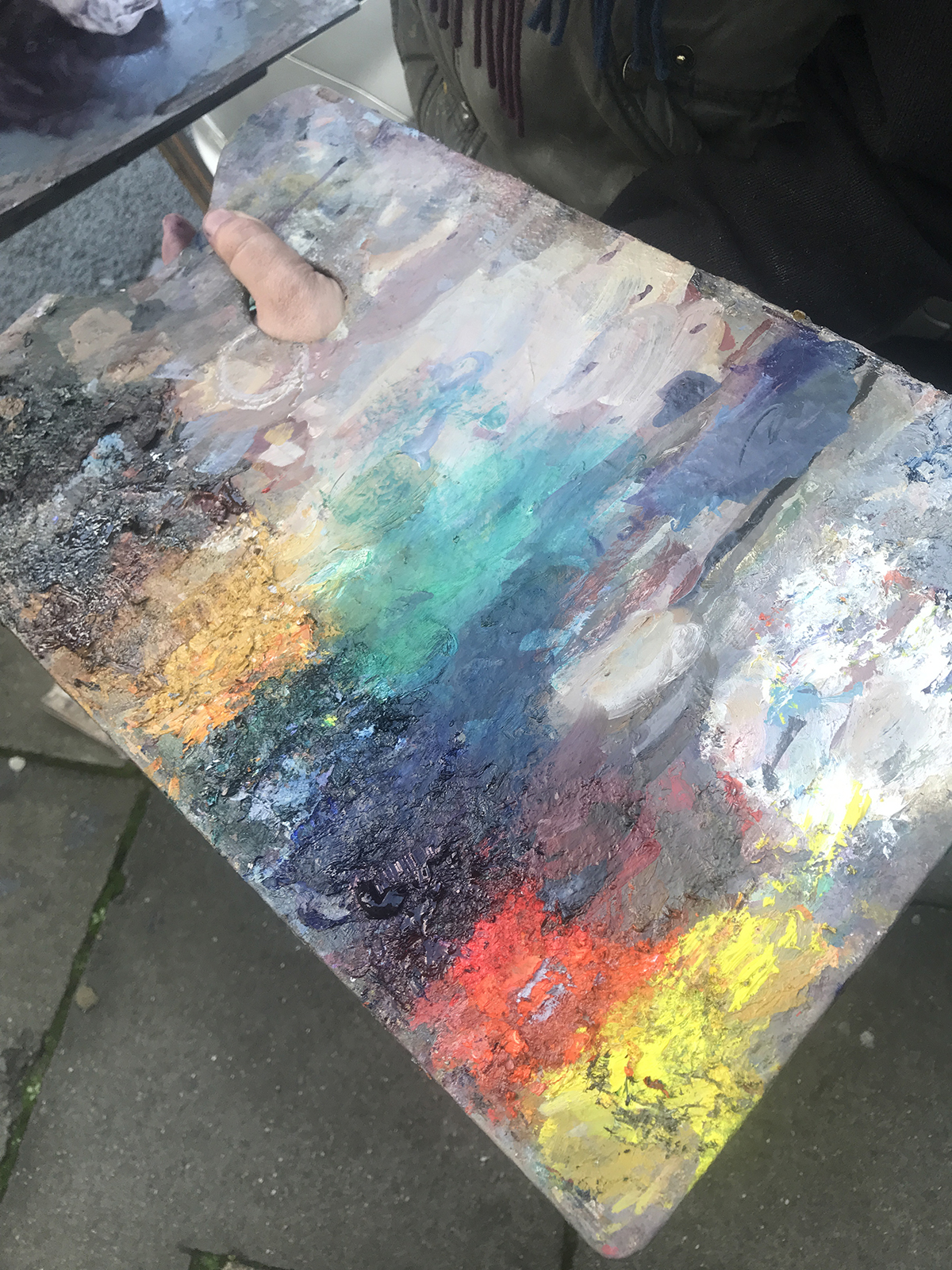 I arrived at 10am, Rob had been there since 7. We chatted while he painted and I looked on fascinated. I had, of course, a series of questions to ask him, one of which was how he managed to capture figures so expressively in their movement. And did he impose them from his sketchbook later on in the process?

But no. He instantly drew two fingers of his left hand through the pigment as a couple walked past Piccolino. He told me that he would start with those finger marks and sketch in detail after detail until he had decided whether it should be a couple, a woman with a child, one person, adding a touch of paint for a red scarf or a dark jacket until he had formulated in his mind – and in paint – what those figures should look like. “I try and make each mark a direct experience that others can identify with.” 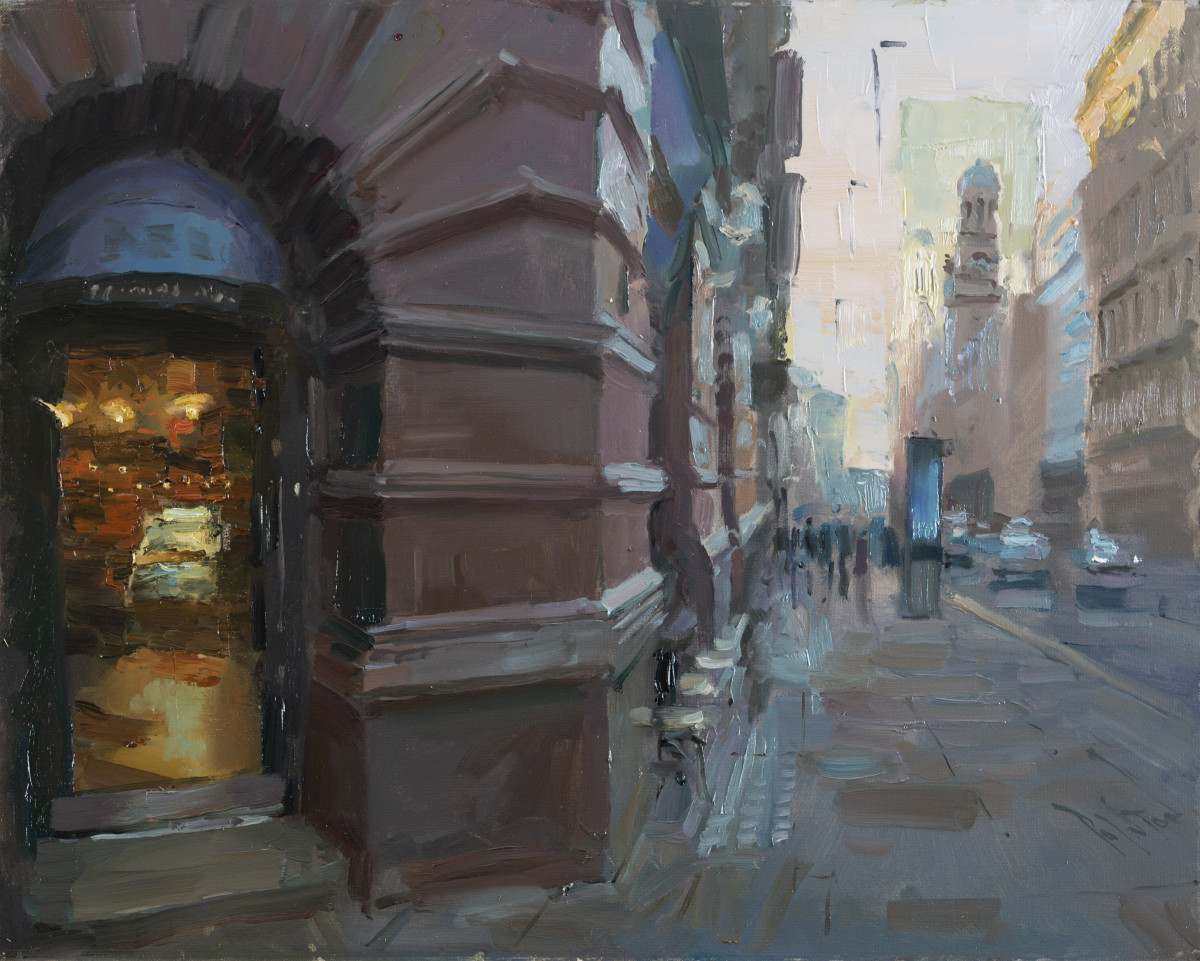 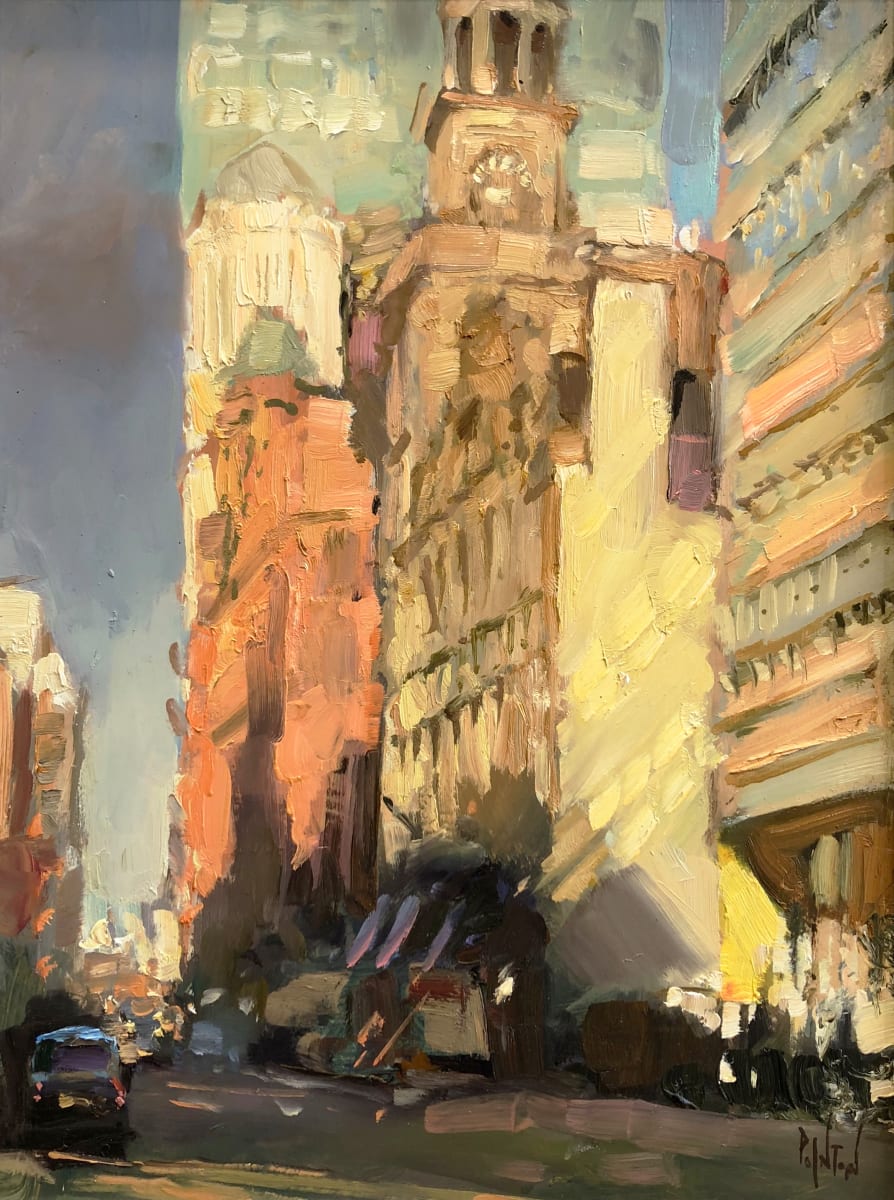 As I’ve said, Rob had been there since 7am, in a location he had pre-determined, sketching in the scene with base paint. “The most frustrating part,” he told me, “is the first half hour. I set up my easel and then spend that time mixing eight or nine colours that will form the basis of the work. I mix and then hold up my brush to the light, then mix again if it’s not quite right. Then I start.”

Rob will return to that site over maybe three or four days, building up the completed painting.

“The light’s just about gone now from when I started, so I’ll come back at the same time on other days.”

I watched as he loaded his gear back into his car. The closest thing he has to a studio, but of course only to move his equipment – and paintings – around. 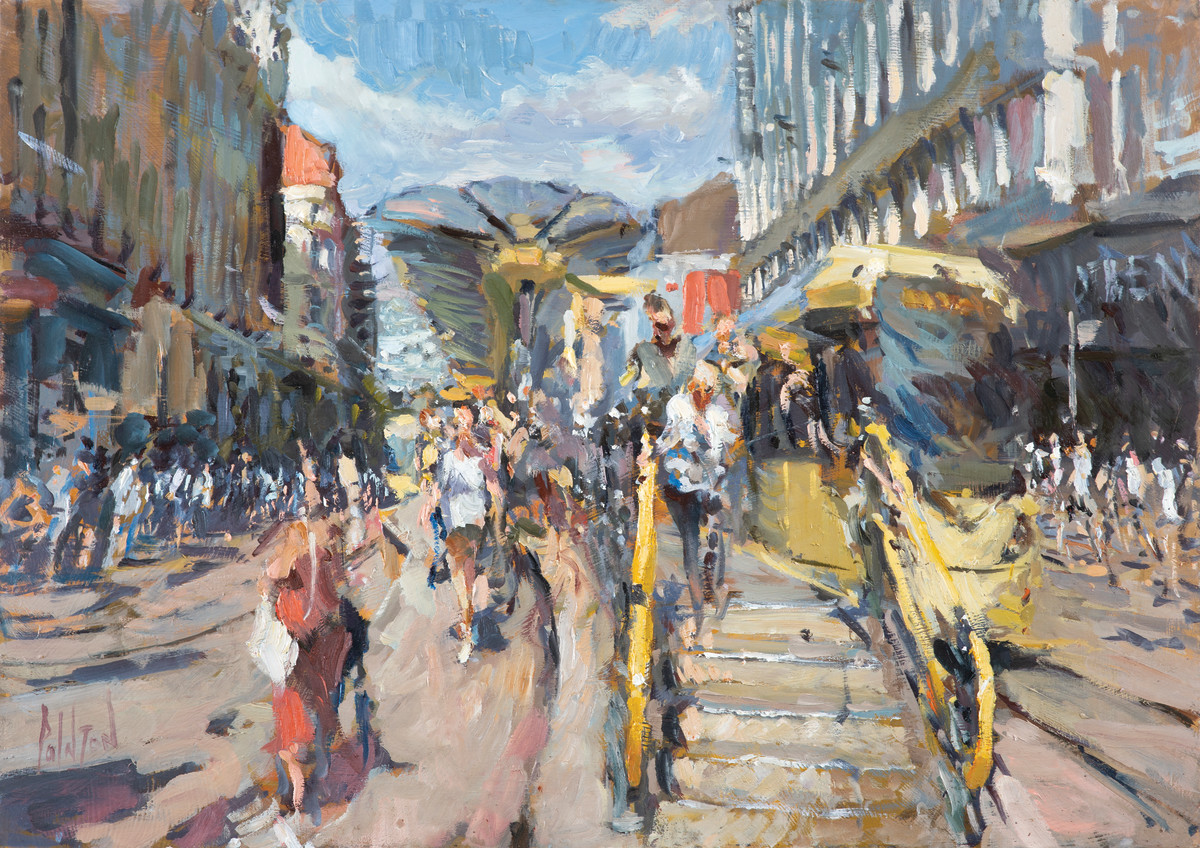 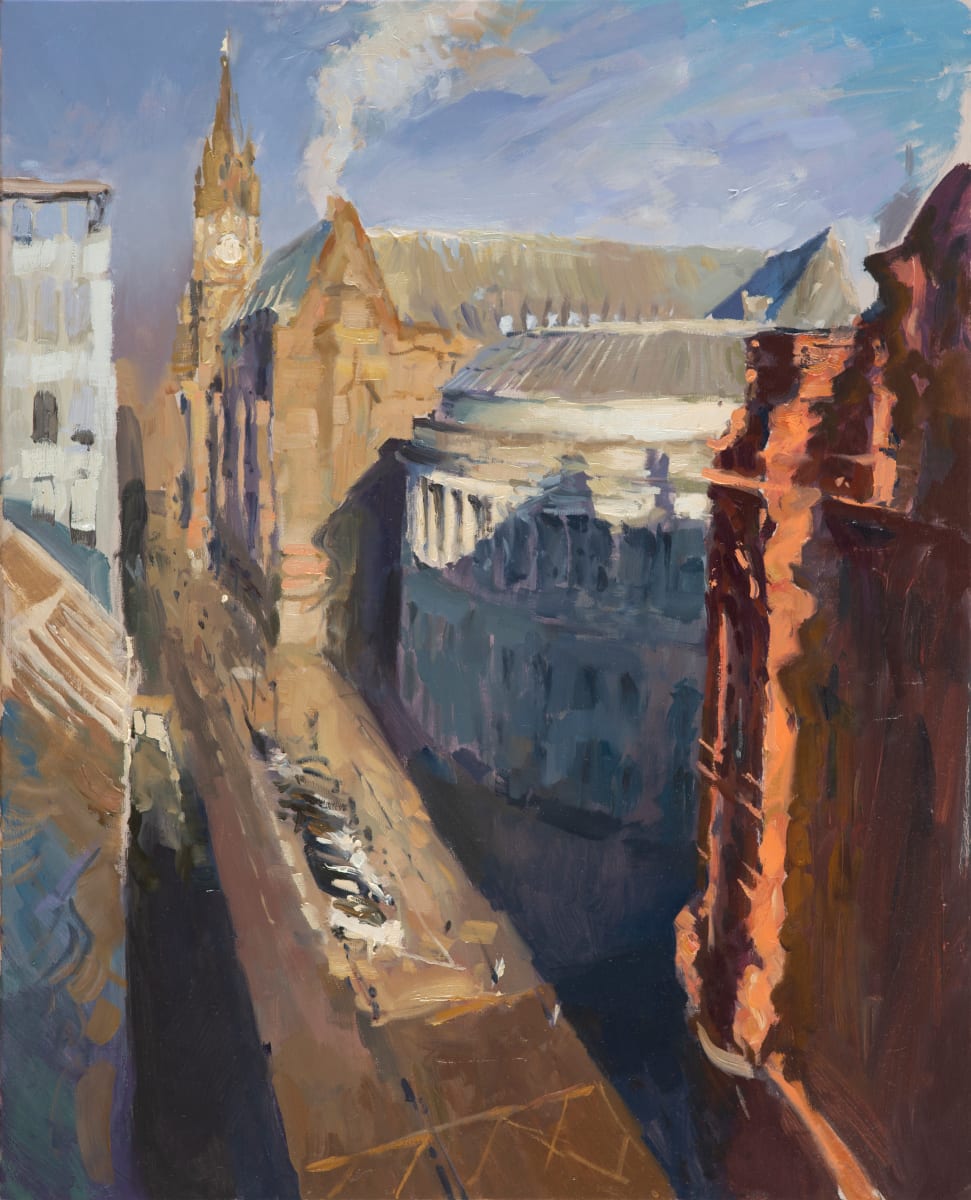 But as always when you step back into a story, the history is just as fascinating as the success which Rob has found today.

Rob’s first tutor was his grandma. And the most influential I discerned. Then a first class honours degree in fine art from Aberystwyth Uni and on to The Royal Drawing School in London. 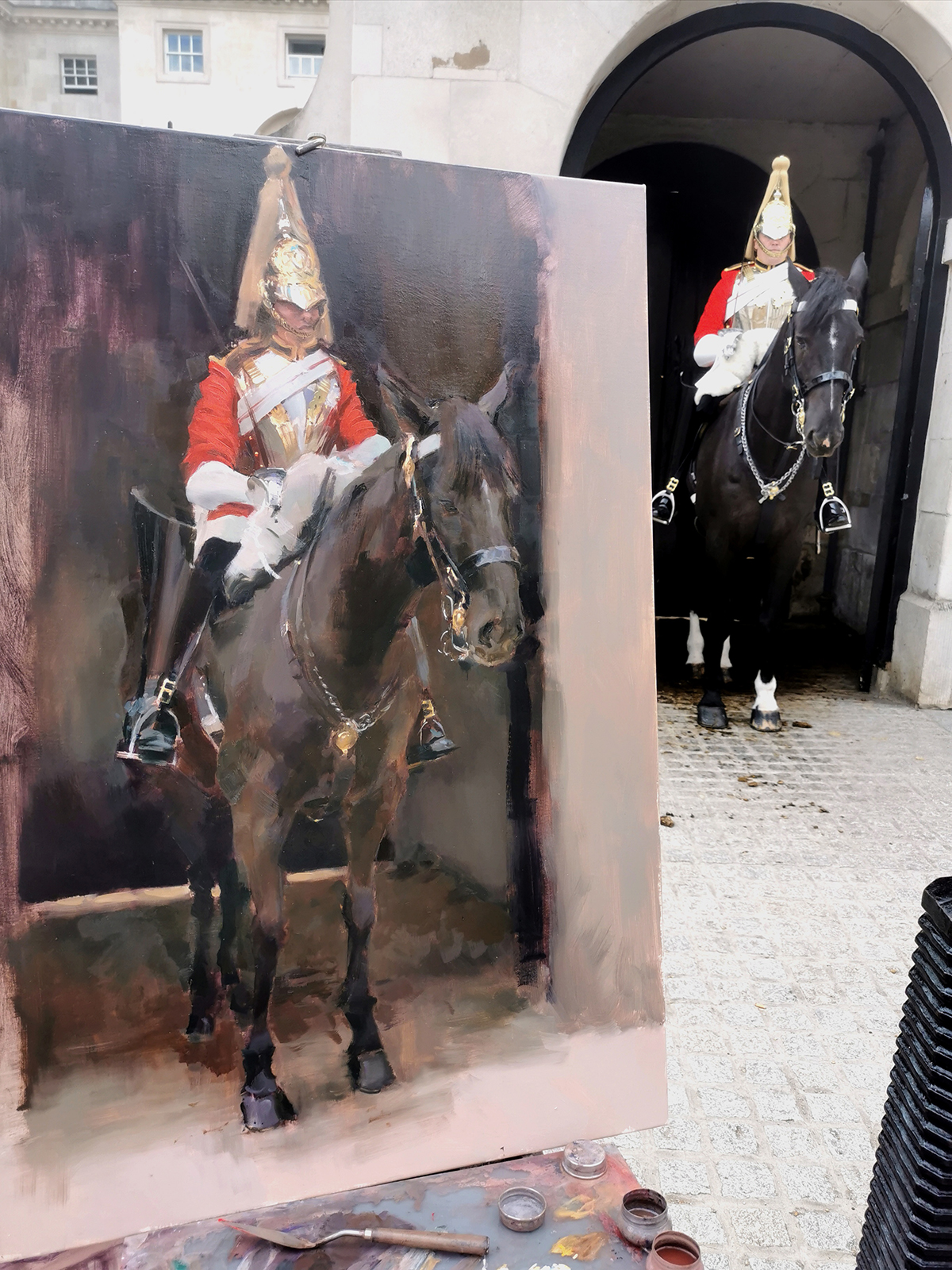 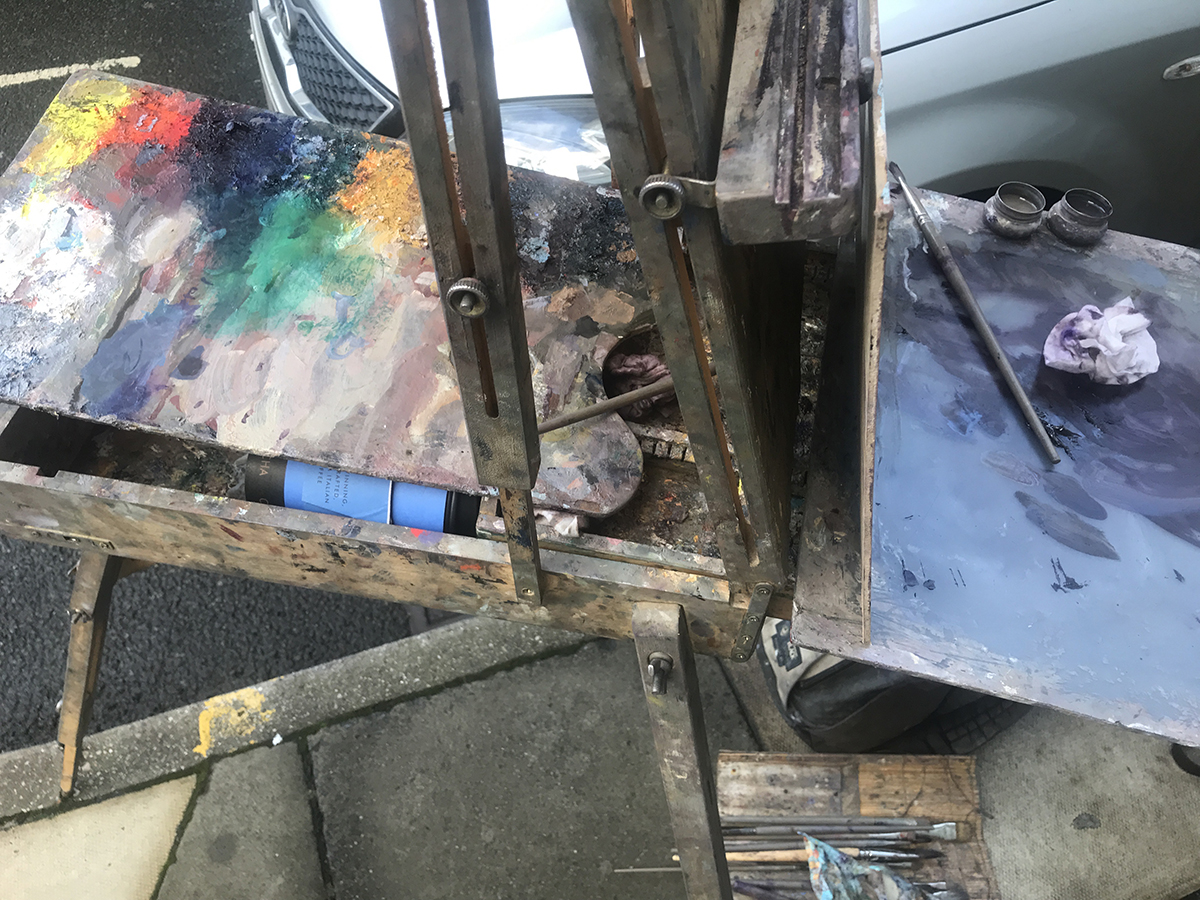 After all this he returned to his home town of Stoke-on-Trent. It was then that reality struck home. “I was selling the odd painting for eighty quid at local art fairs, but really nothing more than that. So I had to get a job as a graphic designer – doing ads for Bargain Booze and the like. It was soulless and I left after a year…before they sacked me!”

I guess the bohemian in Rob took over then and changed his life and career. He bought a narrowboat and set off on a year long waterways tour with partner Karen (now his wife), of course painting along the way. One of their first stops was Castlefield Basin and the tour produced a collection called ‘Year of the Boat’ which was exhibited in Manchester. 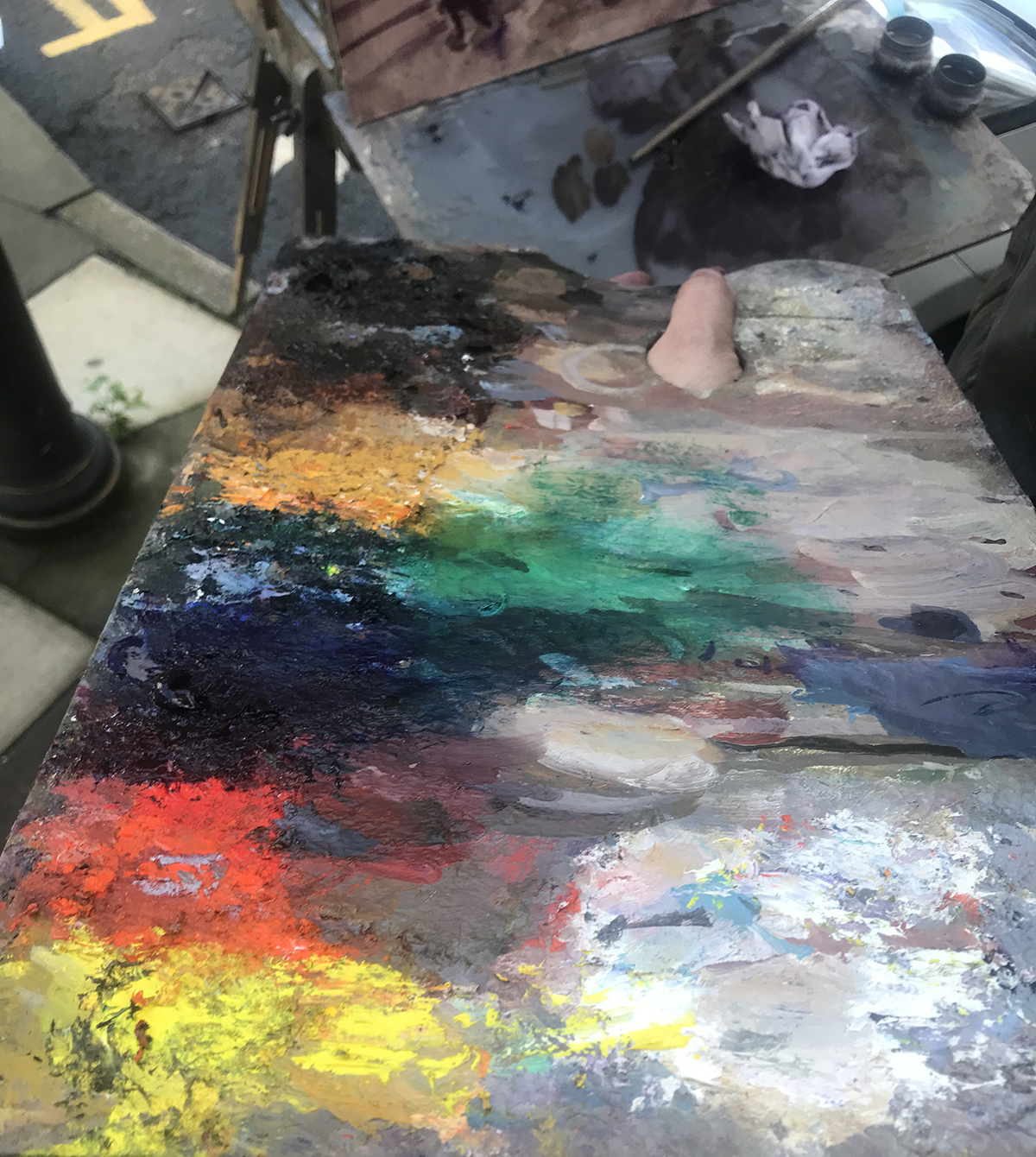 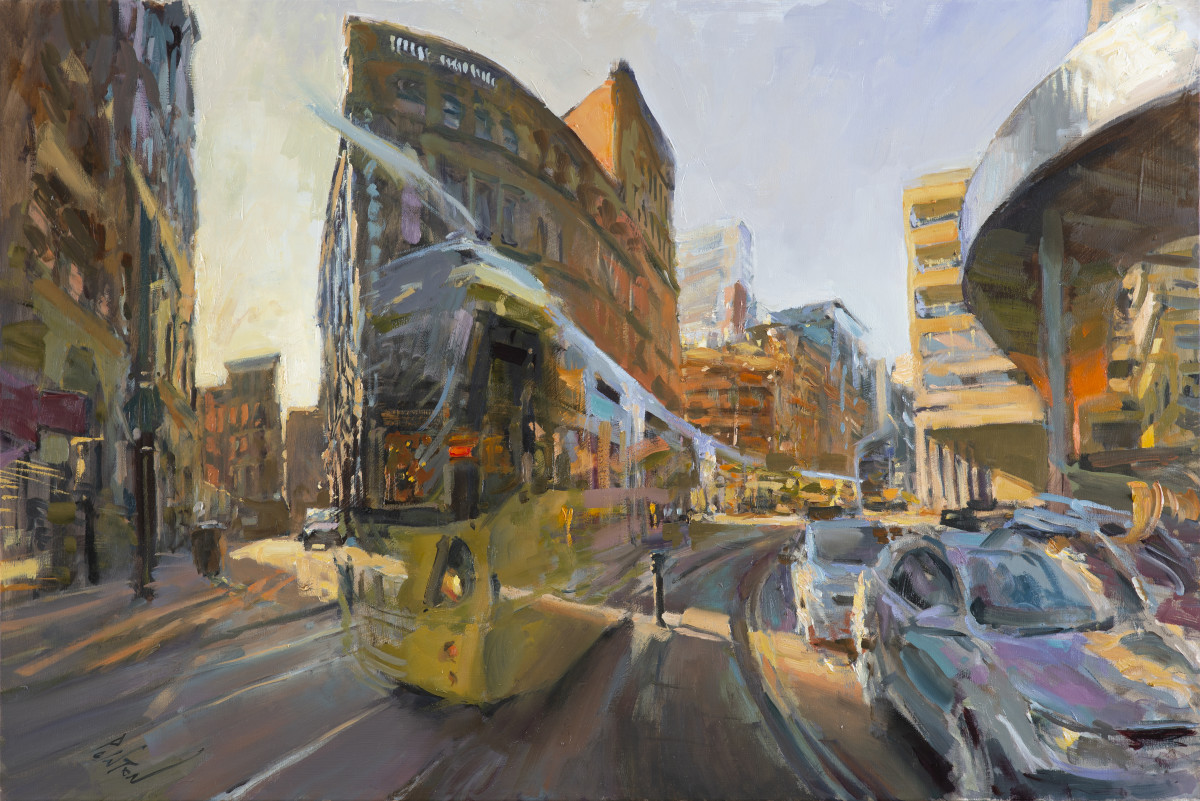 “Over a time my paintings started selling for three hundred quid, five hundred…and on. Then I was asked to be the Canal & River Trust’s artist in residence.”

The subsequent eight years has seen Rob (amongst many other things) International Artist in Residence for Manchester Airport, travelling the world to create paintings for airport terminals, plus having work in the personal collection of HRH The Prince of Wales. Next year he will be artist in residence for the Household Cavalry. A far, far cry from Bargain Booze ads. 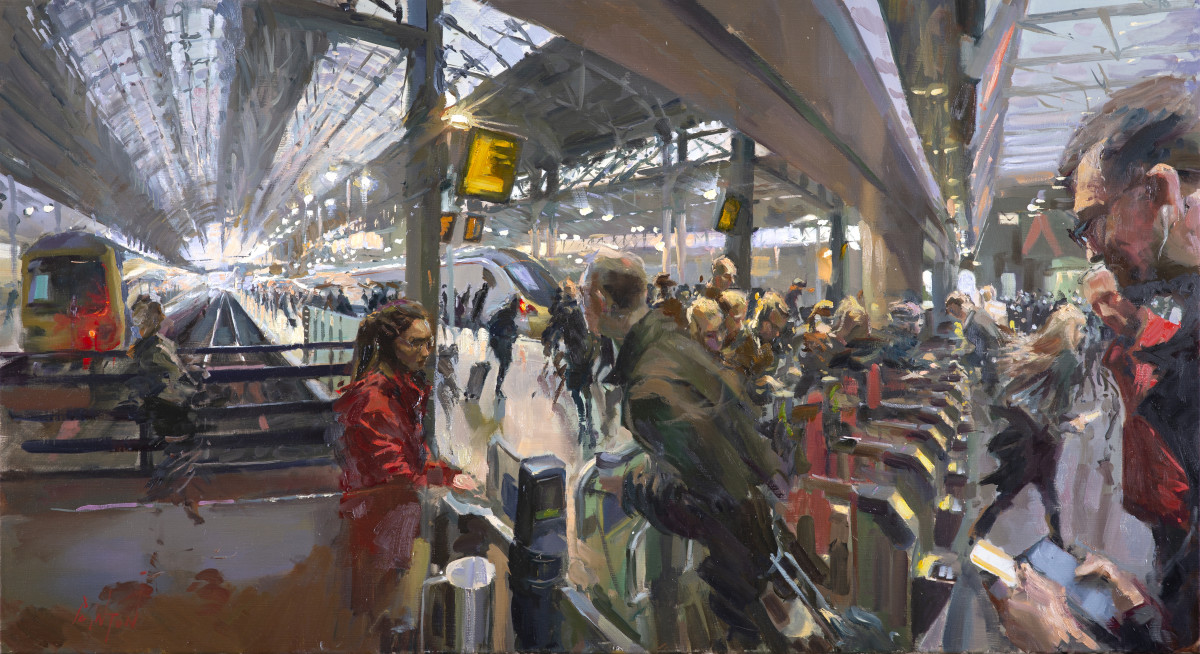 But during the past year – much of it in lockdown – Rob has painted Manchester. From the hustle and bustle that we used to know, to what have become the almost deserted streets that we now know. “The streets are my painting gymnasium.”

‘An Unprecented Year,’ featuring these paintings, runs at Contemporary Six Gallery from October 23rd to November 6th, with a virtual tour through the Gallery’s website.