The life-size bronze statue commemorates the life and works of Chris Sievey who died in 2010. 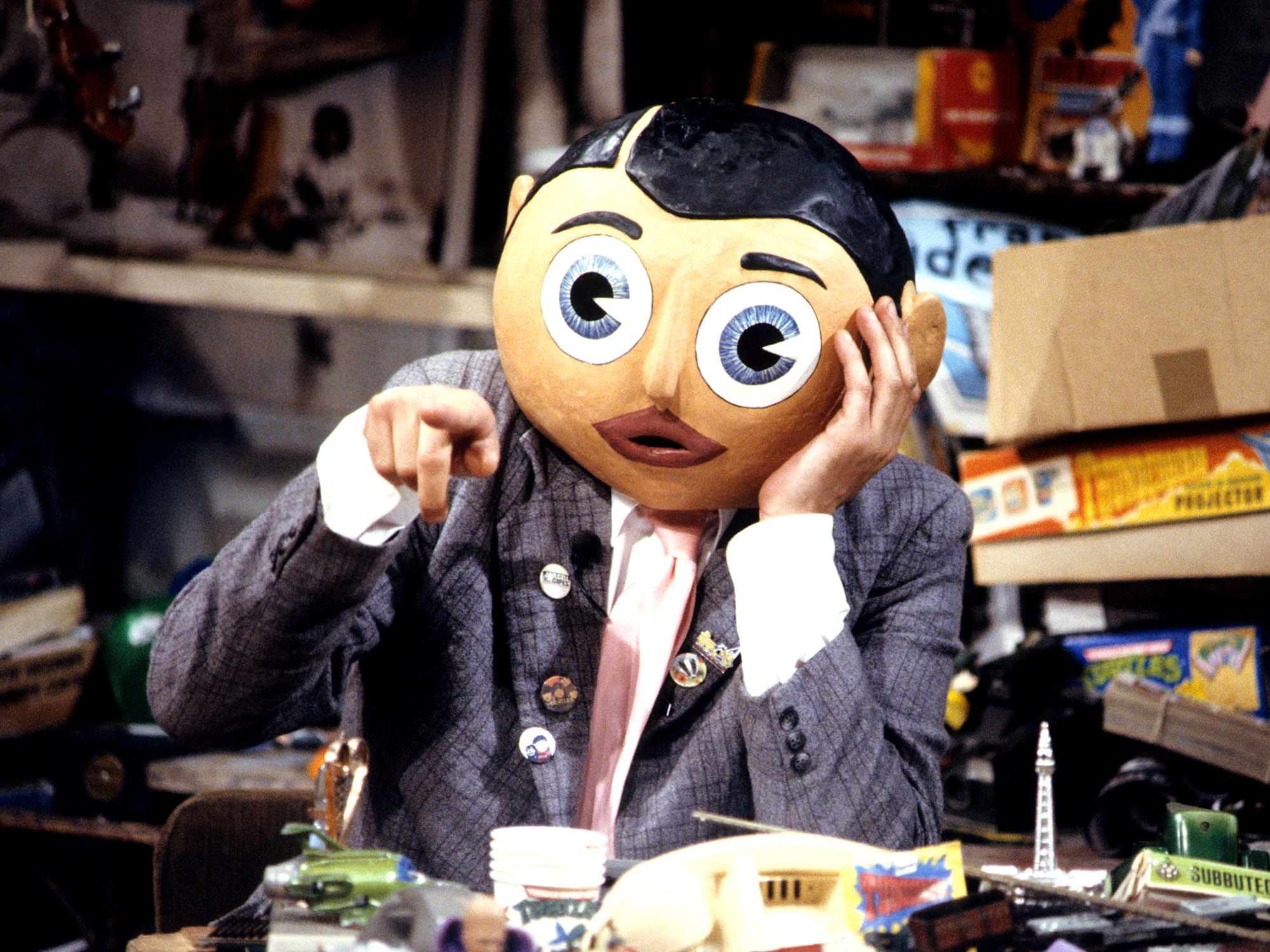 Frank Sidebottom is certainly a product of a particular time and place. In fact, it’s highly likely that many of you reading this, perhaps those of you under the age of 30, won’t have a bloody clue who he is – despite the fact that you’ve seen his weird round head somewhere before.

I suppose you’d be even more dumbfounded if you found yourself walking down Stockport Road in Timperley Village and happen upon a life-sized statue of Frank, complete with full colour papier-mâché head and confident thumbs up. 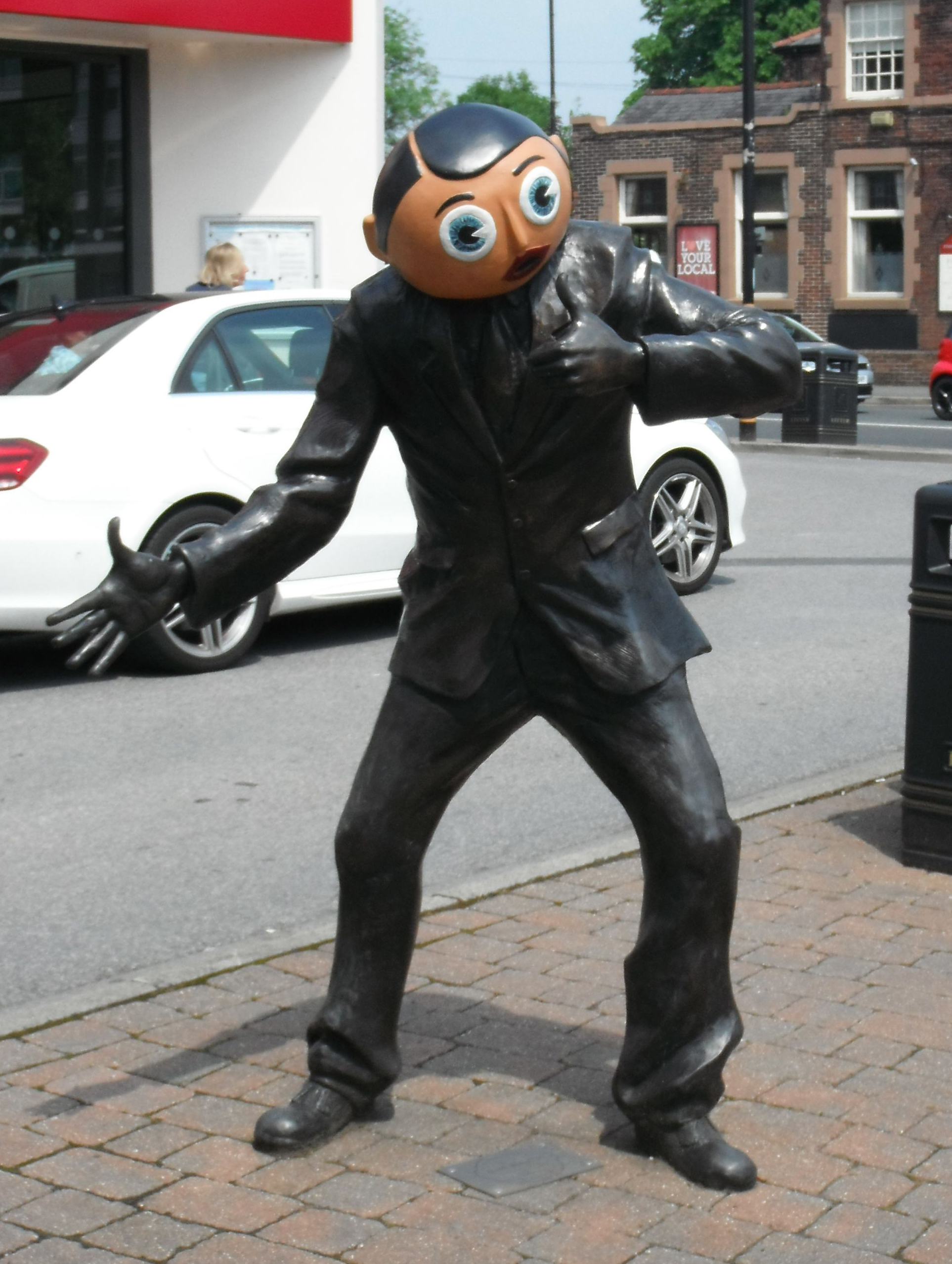 The statue itself was unveiled back in 2013, three years after the untimely death of Chris Sievey, the comedian and musician under the oversized head, and a product of years of relentless fundraising from Chris’ fans.

All of the £20,000 raised for the statue was donated by fans, with the initial concept created by Chester-based sculptor Colin Spofforth, who based the work on Sievey’s most famous character Frank Sidebottom. 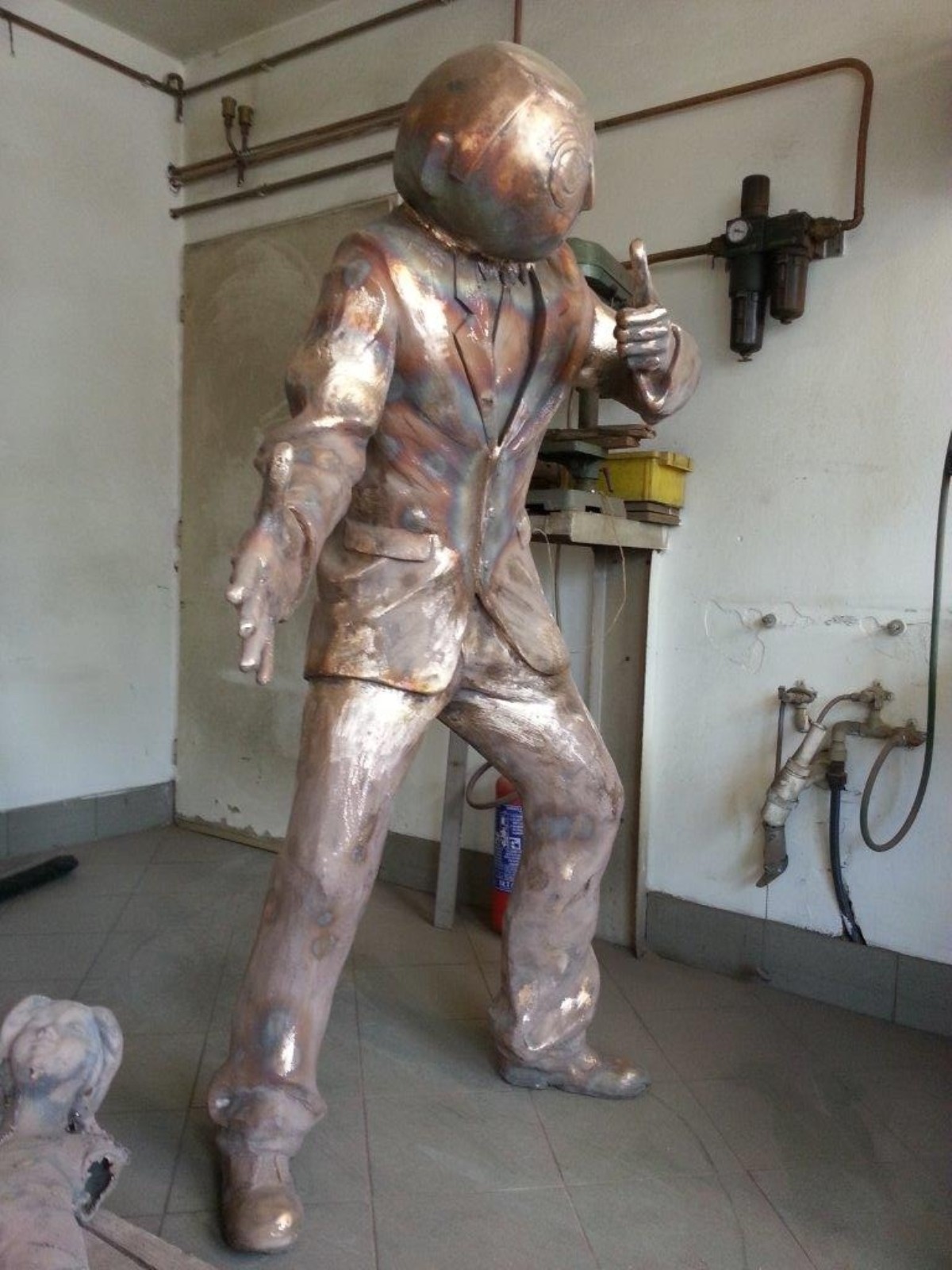 The bronze statue (before colouring)

Instantly recognisable by this massive weird head, Frank was also usually always dressed in a 1950s style suit and was portrayed as an aspiring pop star from Timperley itself.

Always cheerfully optimistic and enthusiastic, Sidebottom became a regular fixture on television throughout the late 80s and early 90s – even becoming a reporter for Granada Reports and presenting his own show on Channel M.

Sidebottom was first revealed to the world on a promotional record that came free with a game for the ZX Spectrum that Sievey himself created. Almost immediately Sievey started sending Frank’s cover songs to major music labels, and actually got him signed to a label – releasing a series of EPs throughout 1985. 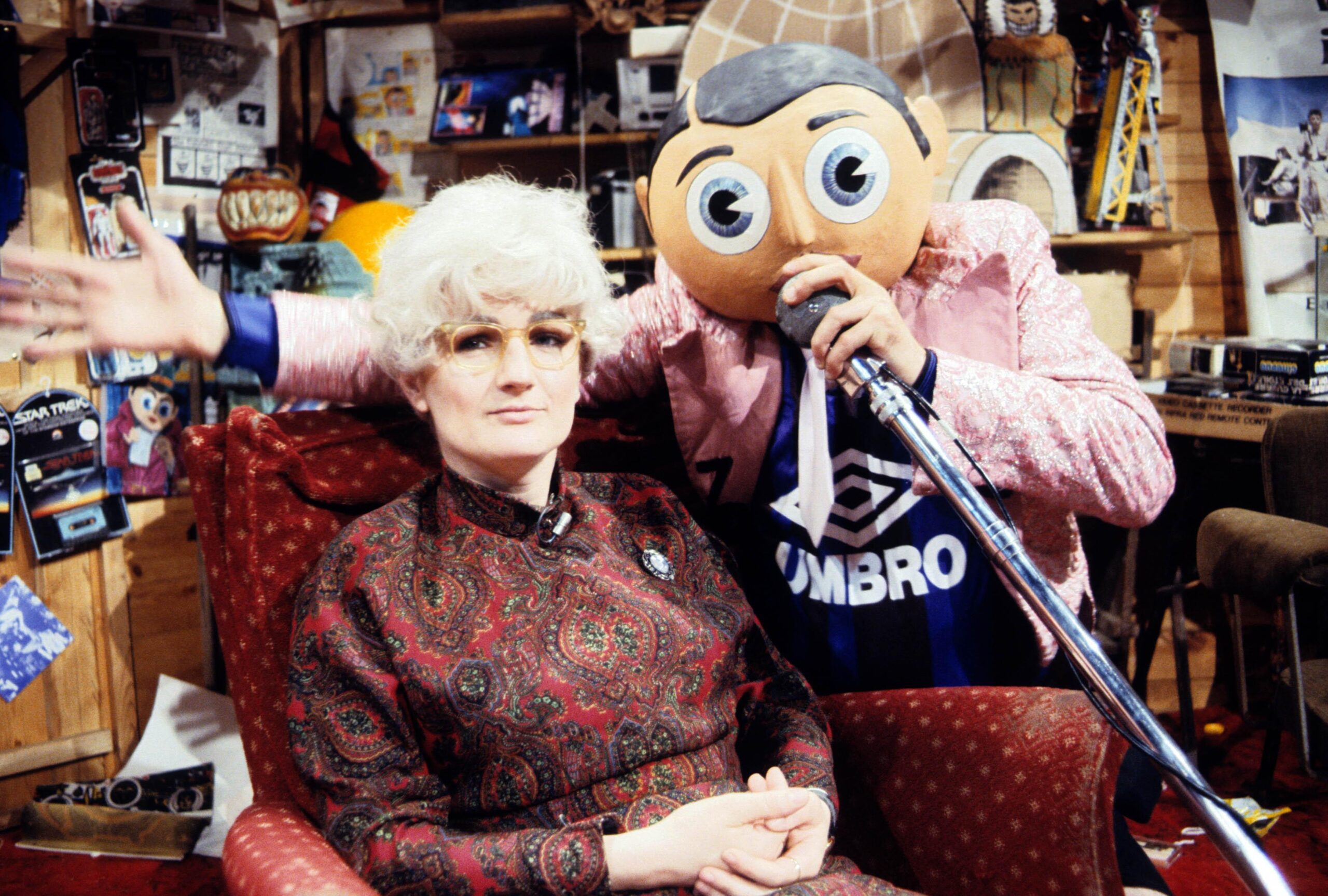 Developing Frank’s decidedly cult status, particularly in the North, Sievey began touring as Sidebottom with a show ranging from proper stand-up comedy, to music and even some audience interaction in the form of a tombola.

Always family-friendly, Frank’s shows were always fun, unpredictable and even helped launch the career of Caroline Aherne, as Mrs Merton appeared as Frank’s sidekick on his first spoken word album ‘Fantastic Tales’ in 1987. 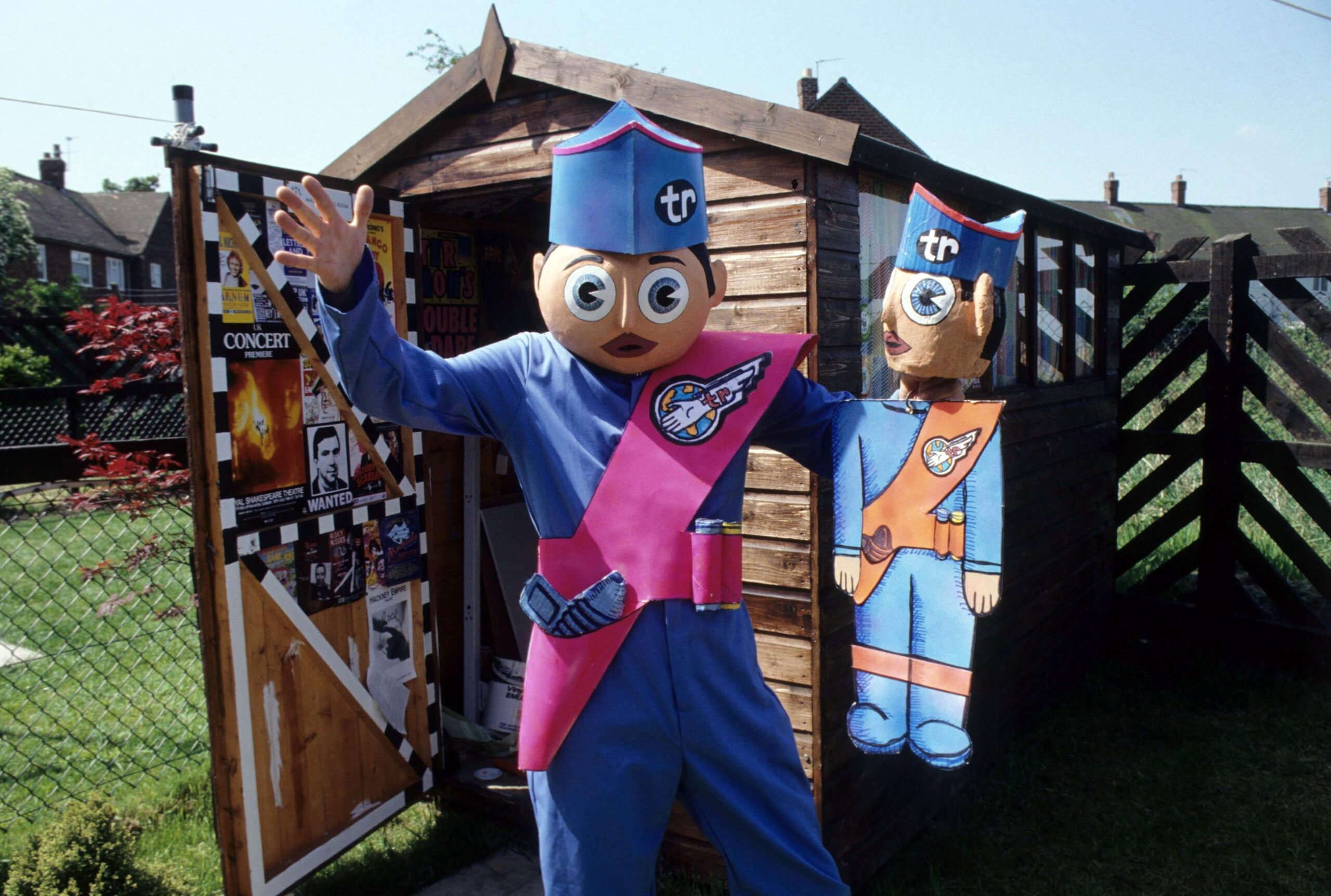 Riding the wave of the city’s Madchester scene in the late 80s, Sidebottom unfortunately disappeared into relative obscurity in the 90s, and was rarely seen on telly or performing live.

It wasn’t until the mid noughties when the character would resurface once again, appearing at festivals, exhibiting his work at TATE Britain and performing live at various venues throughout the north.

Sadly, Sievey died in June 2010 at the age of 54, but his legacy and legend still permeates the city. 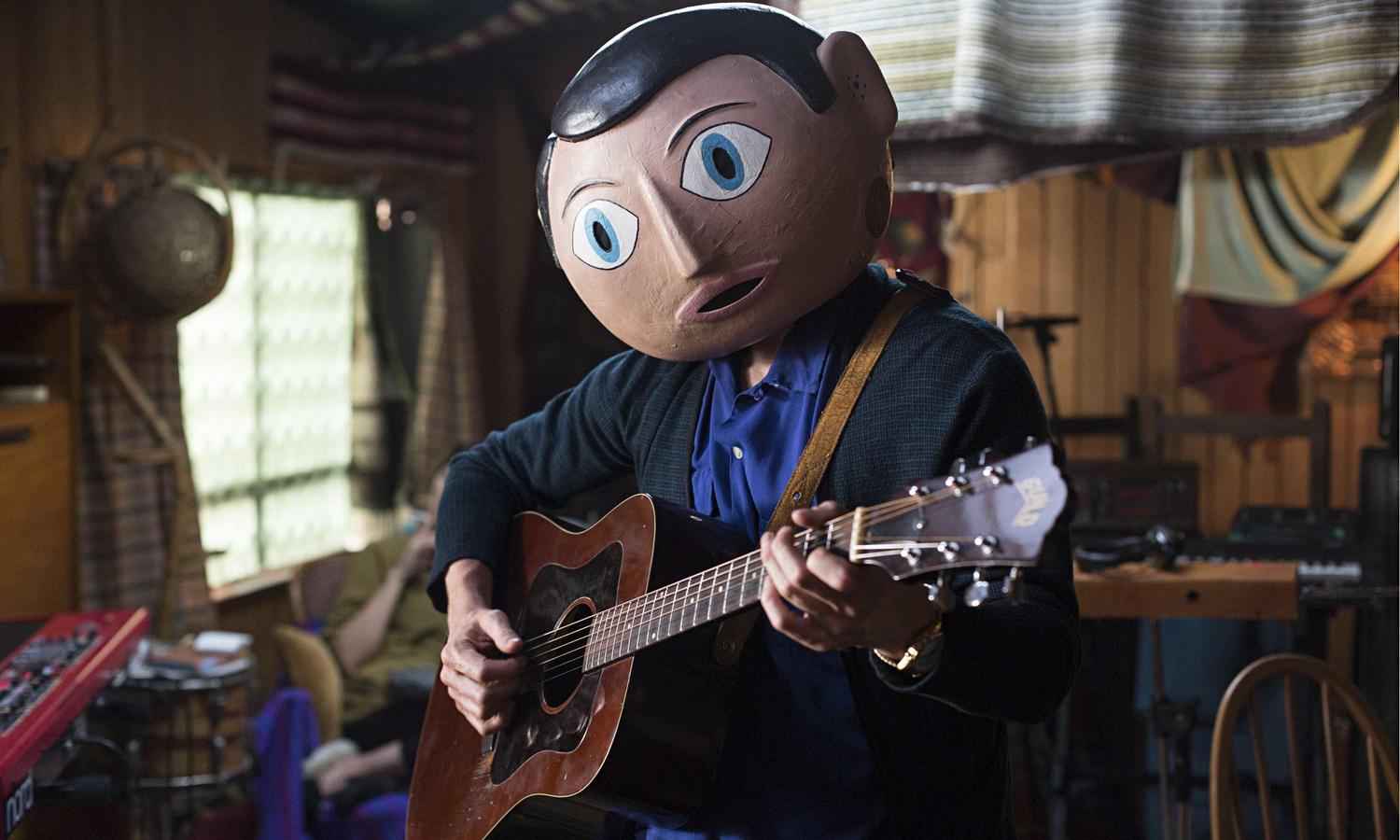 2014 saw the release of the excellent ‘Frank‘ a story inspired by Sievey and written by author Jon Ronson who was Frank’s keyboard player for a time in the 80s. This was followed by the feature-length documentary ‘Being Frank: The Chris Sievey Story‘ in 2019. Both are essential.

Also well worth a go is the book ‘Frank: The True Story that Inspired the Movie‘ by Jon Ronson, a memoir of his time in Sidebottom’s Oh Blimey Big Band and a fantastic read exploring the man beneath the ‘head’. 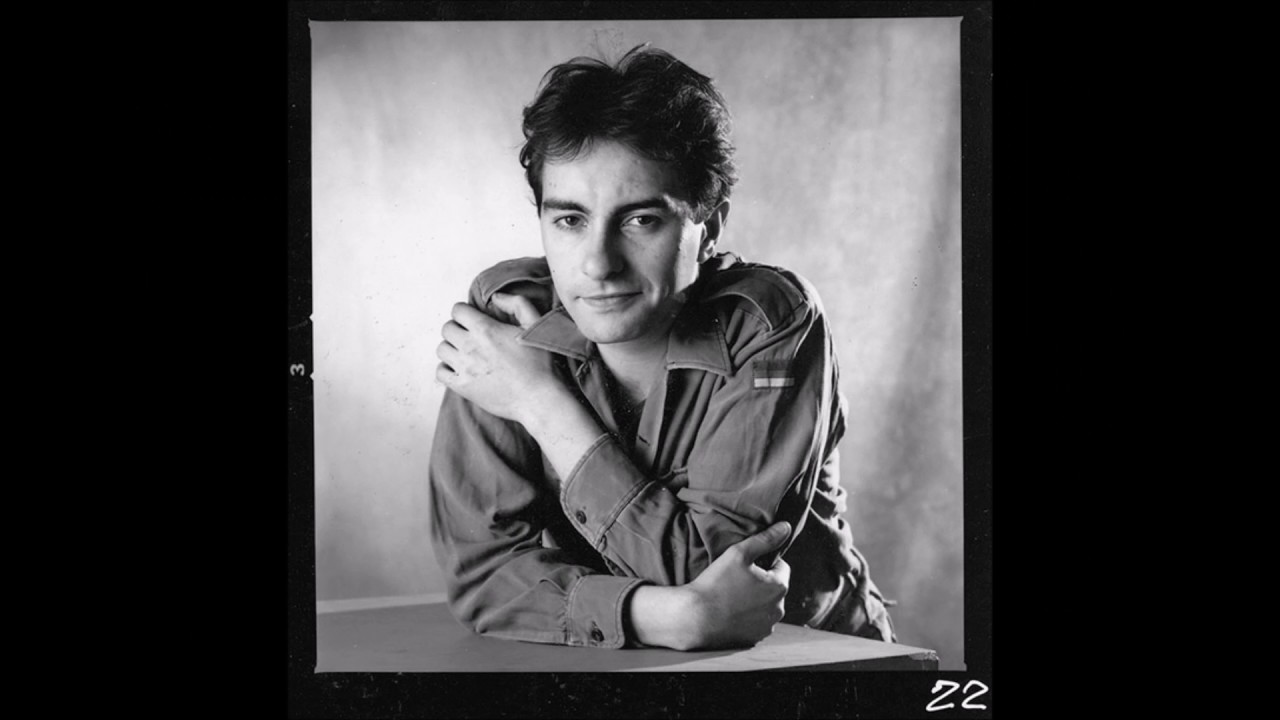 A visit to Timperley wouldn’t be complete without a stop at Sievey’s statue, a fittingly bizarre and loving tribute to a ‘one of a kind’ man who brought laughter and fun to the lives of millions.

This Manchester lad has created Sneaker Candles… and they’re perfect for your house!