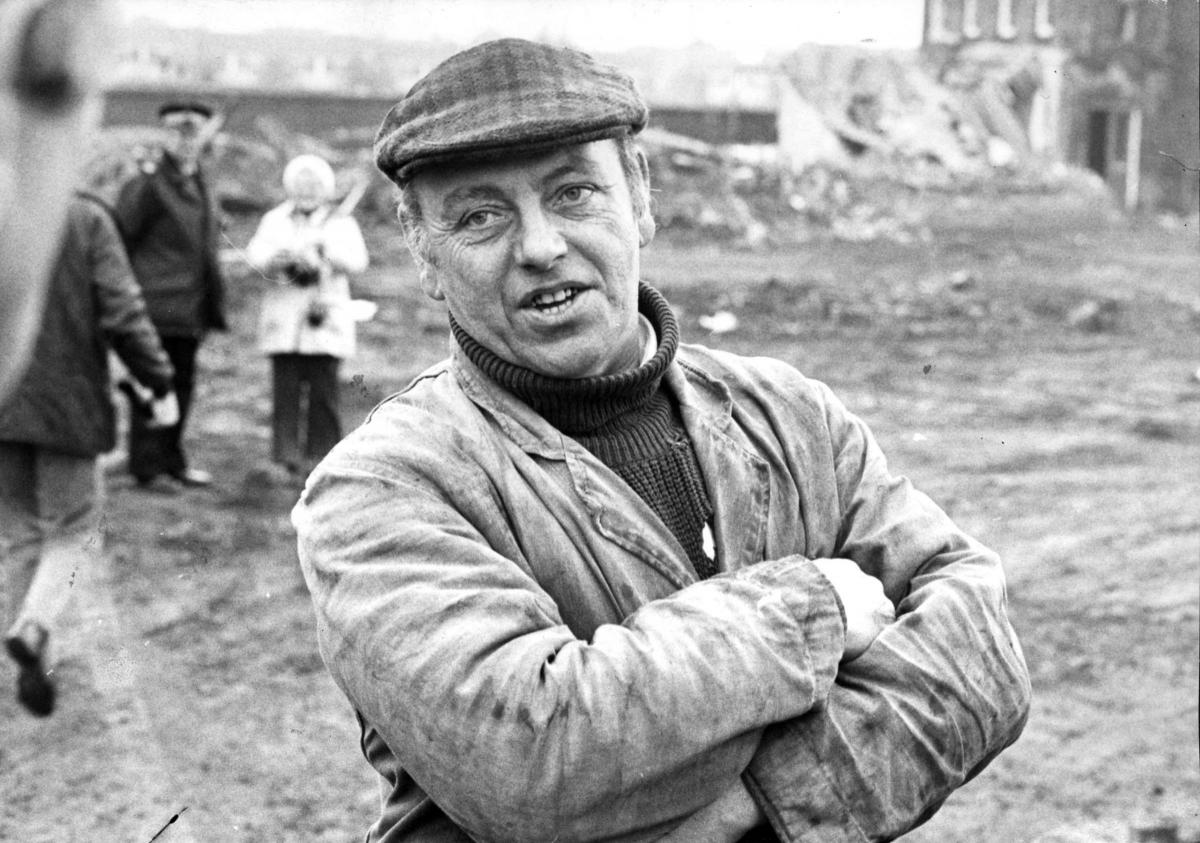 Most people who read this probably won’t have a clue who Fred Dibnah is or why he has a statue in the centre of Bolton. In fact, all of those people who don’t know who he is probably didn’t even bother clicking on this article – so we can disregard them altogether I say.

As I’m sure you are fully aware, Fred Dibnah was a steeplejack – basically a mad fella who scaled buildings, chimneys and steeples in order to carry out repairs on them – a job that pretty much nobody wants to do – ever.

As a lad growing up in Bolton, Fred was fascinated by the steam engines that powered all of the textile mills in the area and he became enamoured with mechanical engineering and in particular the huge chimneys that jutted out of the towering mills.

He later became a steeplejack and during a stint of making repairs to Bolton Town Hall in 1978, he was filmed by a BBC crew and the footage made its way down to Television Centre, at that time probably the most dangerous place on Earth, and somehow made its way into the hands of a commissioning editor.

A documentary was planned, with Dibnah as its star, a gentle Northern presence that could provide a unique insight into not just the life of a steeplejack but also working-class life in the North and indeed, the expansive and important history of the region.

Inextricably linked to his love of steam engines and engineering, Dibnah taught millions of people all about the Industrial Revolution – and the importance of history to these once proud Northern towns.

The first ever scene filmed for ‘Fred Dibnah, Steeplejack‘ was in Shaw in Oldham, just down the road from me mams. The mad bastard got up early one morning, grabbed the filming crew and climbed to the top of a 245-foot chimney on an old mill. The programme was massively popular and made a household name of Dibnah, and even bagged him a BAFTA for Best Documentary in 1979.

Sadly, Dibnah died back in 2004, leaving behind a wife, two ex-wives and 5 kids. Strangely enough, his wife Sheila and youngest son Nathan were cut out of this will at the very last minute, and with an estate worth around £1 million, she wasn’t very happy about it at all. 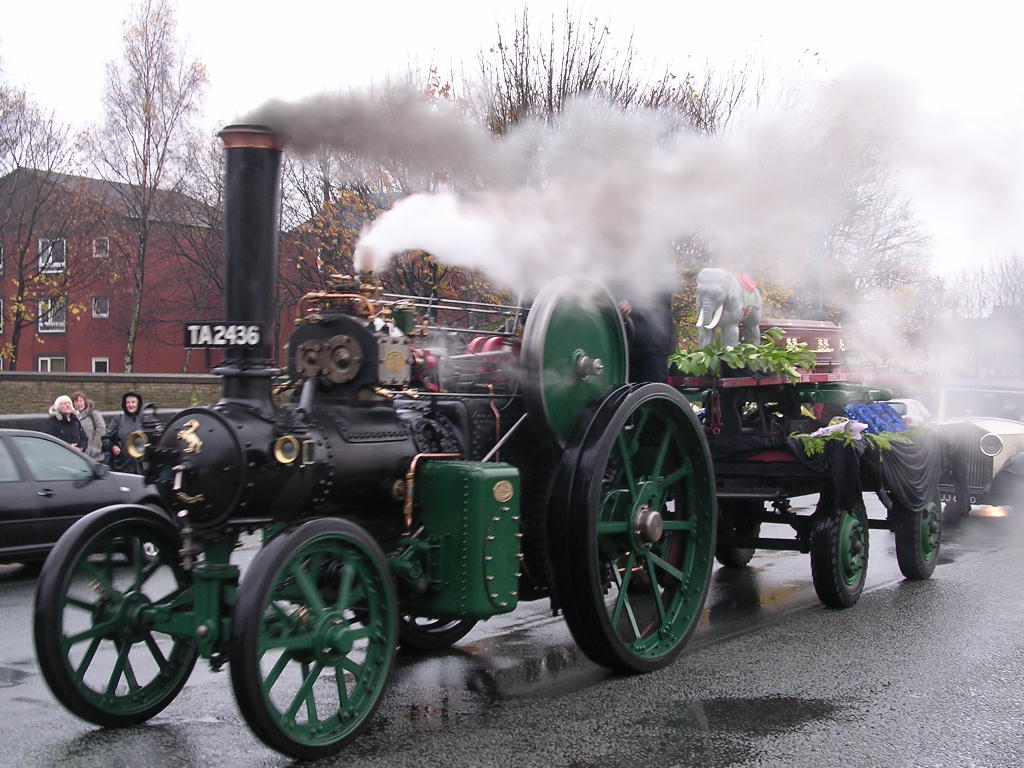 On the day of his funeral, his coffin was towed through Bolton on the back of a restored tractor steam engine, driven by his son.

A few years after his death, a public subscription decided to erect a statue in his honour, with thousands of people and organisations giving over £45,000 to make it a reality. Roping in Knutsford-based sculptor Jane Robbins to create it, the 8-foot statue was unveiled on 29th April 2008. 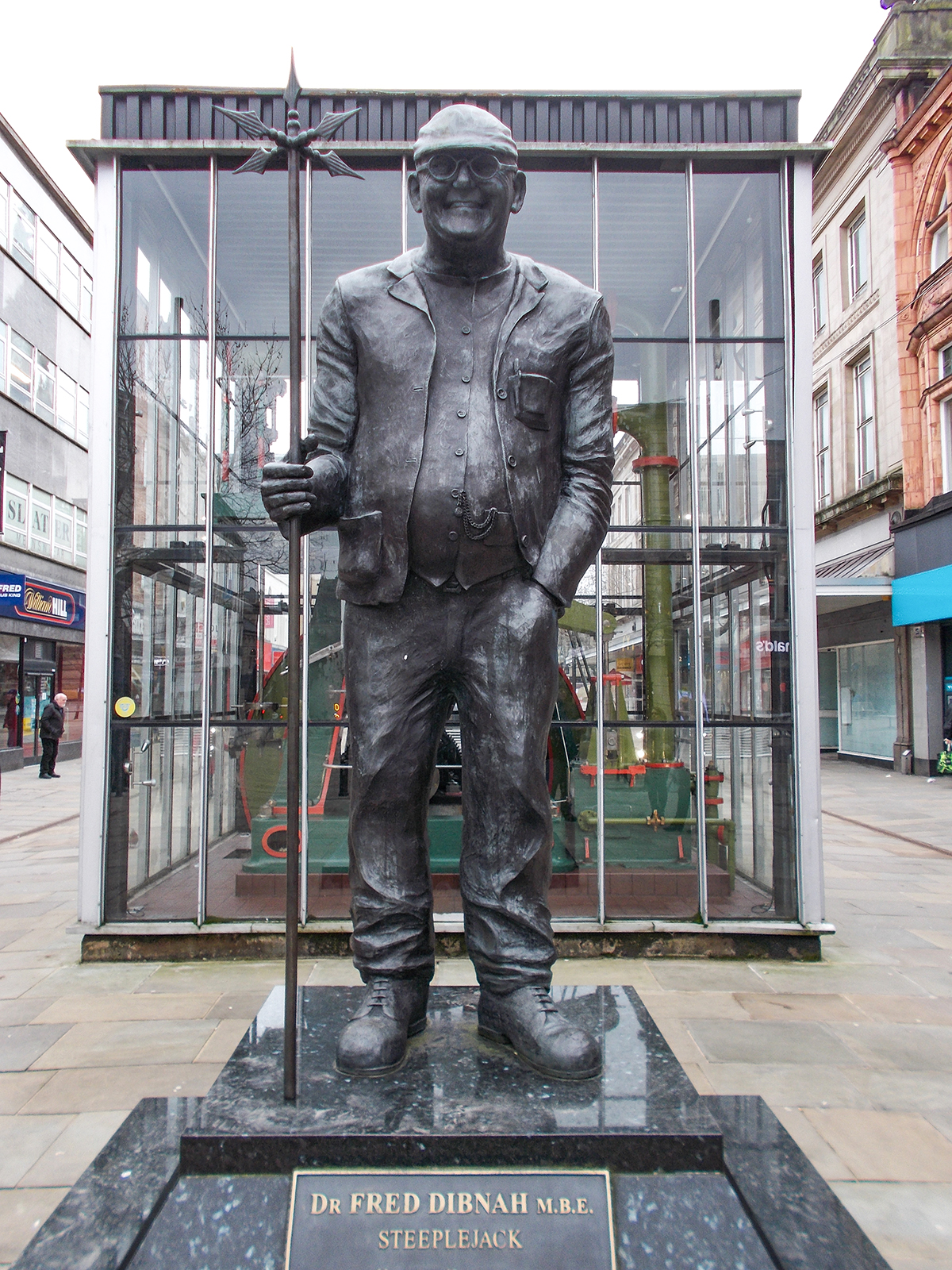 An oddity of the statue is that Fred’s buttons are on the left – when on bloke’s clothes they should be on the right. This peculiarity has been explained by the sculptor as a an ‘in’ joke for Fred, who once told a story on telly about a sculptor who had killed himself after he realised that a statue he’d created has the buttons on the wrong side. As a bit of a homage to Fred and this story, Robbins decided to pop his buttons on the left.

Since the unveiling many have commented rather negatively on the way the statue looks. A quick look on TripAdvisor and you’ll find people actually reviewing a statue. One fella in particular, ‘John P’ is NOT happy;

“This grotesque statue is like no human being who has ever set foot on Earth. Fred Dibnah doesn’t deserve to be ridiculed by an incompetent sculptor who isn’t worthy of the title “artist”. This statue should be removed and replaced by a fitting statue sculpted by someone who understands human anatomy, proportions and form.”

Scathing. He only gave the statue ONE star (out of 5). Poor Fred (and Jane). To be fair to John – the statue does look a little bit like a character from Wallace & Gromit.

Anyway, the inscription on the statue reads:

The Best Tequila Joints in Manchester

The best things to do in Manchester this week
Arts & Culture

The Stoller Hall kicks off 2023 with a season of classical, jazz and folk stalwarts