Taking loose inspiration from an imagined vision of future Bangkok — with everything from interior aesthetics and bespoke cocktails to synth-toned soundtrack keeping with the concept — we sample the new a la carte options at Manchester’s progressive South East Asian fine dining spot.

Although gentrified, the Northern Quarter might be central Manchester’s best district for recreating the aesthetics of 1980s sci-fi. Victorian red brick mid-rises in various states of (dis)repair, graffiti’d alleys hiding unknown delights and dangers for the bold and brave, overshadowed — and juxtaposed — with the ever-taller glass and steel’d up skyline of the 21st Century city.

District makes perfect sense, then. Arriving through the discreet Oldham Street entrance, attention is instantly drawn to the neon metropolitan scene rendered on the back wall, lights reflecting through the dining room by way of stainless steel fittings, open kitchen with wok and flame firing up centre stage, and bare brickwork to the right, where a pair of turntables and mixer are also set up. This progressive Thai eatery takes loose inspiration from a ‘future Bangkok’, an objective vision here used to create a concept that definitely feels tangible, and complete.

Ben Humphreys, Chef Patron, is right to be proud. Not only has his highly respected spot managed to thrive during the pandemic it was born into, the experience has been refined during that time and is now refreshingly coherent. A place where top-down control of everything from cocktail parts to music policy positions it well above the majority of eating options in this area — where pavements are packed with bites but high end establishments are scarce — District can compete with the finest of Manchester’s new wave of fine dining.

Let’s start with those drinks. Stand out samples must include Radical Heights, a bold and refreshing blend of unmistakable coriander root vodka, lime and pandam cordial and soda, neither too herbal nor wistfully light. In short, probably just right. Robot Blood, with its vivid purple colour, also makes a big impression, a glass full of playful goodness with lemongrass gin and citrus.

All of which is before we mention the most statement ice cubes in town — one thick, rectangular frozen slab per tumbler — and drinks arriving in 1/4 litre glass bottles, like something you’d expect to be served after breaking the fourth wall straight into Blade Runner. Snare and kick drum-heavy, retro-futurist soundtrack featuring artists like Dance With the Dead and Roby & Topo adding to the vivid tableau.

“When we took the site, and lockdown hit, we just started working on our drinks. Me and my business partner, Danny, did them all. I wanted to treat it like a kitchen, batch everything and bottle it. Nothing is getting shaken or stirred. I work out the dilution of the drink and bottle it — chill it down — so everything is consistent,” says Humphreys. “I wouldn’t want to buy a curry paste, so the same applies to our drinks. We make our own tonic, our own cola, that’s the approach. Infusing a lot of the alcohol with Thai herbs and spices. It’s been the hardest bit for me, the bar, I’m a kitchen man. But I’m enjoying it.”

The virus also led District down a taster menu route, compulsory Track & Trace requirements far easier to meet when everything is pre-planned. The control this format affords the kitchen also naturally appealed to a guy who clearly relishes consistent standards, although things have now changed, and dishes are available to order a la carte. According to chef, this has given the team more freedom to explore their abundant ideas without creations having to ‘fit’ a taster format, and price point.

While Covid-19 has influenced some of District’s story to date, the plates, and their contents, have a much longer story to tell. For the past 15 years, Humphreys has been married to Bo, a Thai woman from Surin, in the country’s far north east — close-ish to the Cambodian border. Regularly visiting, experience of home-cooked food with her family has afforded the boss an in-depth understanding of regional flavours and ingredients, while a new generation of restaurants in the capital, Bangkok, have also had an impact.

“I love eating at places like 80/20 in Bangkok. It’s only a couple of years that Michelin have been out in Thailand, and it’s just exploded since in terms of what’s happening. As soon as Michelin got there they realised the quality,” he explains, noting it’s not just high concepts earning accolades. “There’s some old dear on a wok banging out stir fries, she’s got a Michelin Star because they’re that good. So yeah. There’s a huge inspiration here from Bo’s family, and also Bangkok. Although I’ve predominantly worked in Asian kitchens anyway. I did the opening for Australasia, I’ve been at Tattu, Rabbit in the Moon.”

Understandably, Humphreys self-describes as a kitchen nomad, someone always looking for new horizons, and the challenges and opportunities they bring. As such, District is a bold move, finally laying his own roots down in Manchester. We ask how big a step it feels to him. “Yeah it’s massive… I’m a bit of a dreamer, so if I had it my way I would have probably opened about ten different concepts by now. If I had the money, obviously. I just love thinking up new concepts.”

Far richer is the Pigeon Satay, pumpkin seeds and crisped turnip adding a smack of earthiness, just a few shades lighter than the Herdwick Lamb Neck, which makes the most of District’s South East Asian BBQ methods, and tastes as such. As does the Iberico pork, tamarind jaew adding a welcome kick to the palette, all perfectly offset with zesty sweet salad of peach, pear, ginger, lemongrass and shrimp — AKA Ram Ponlami. Suffice to say, it’s a strong start. 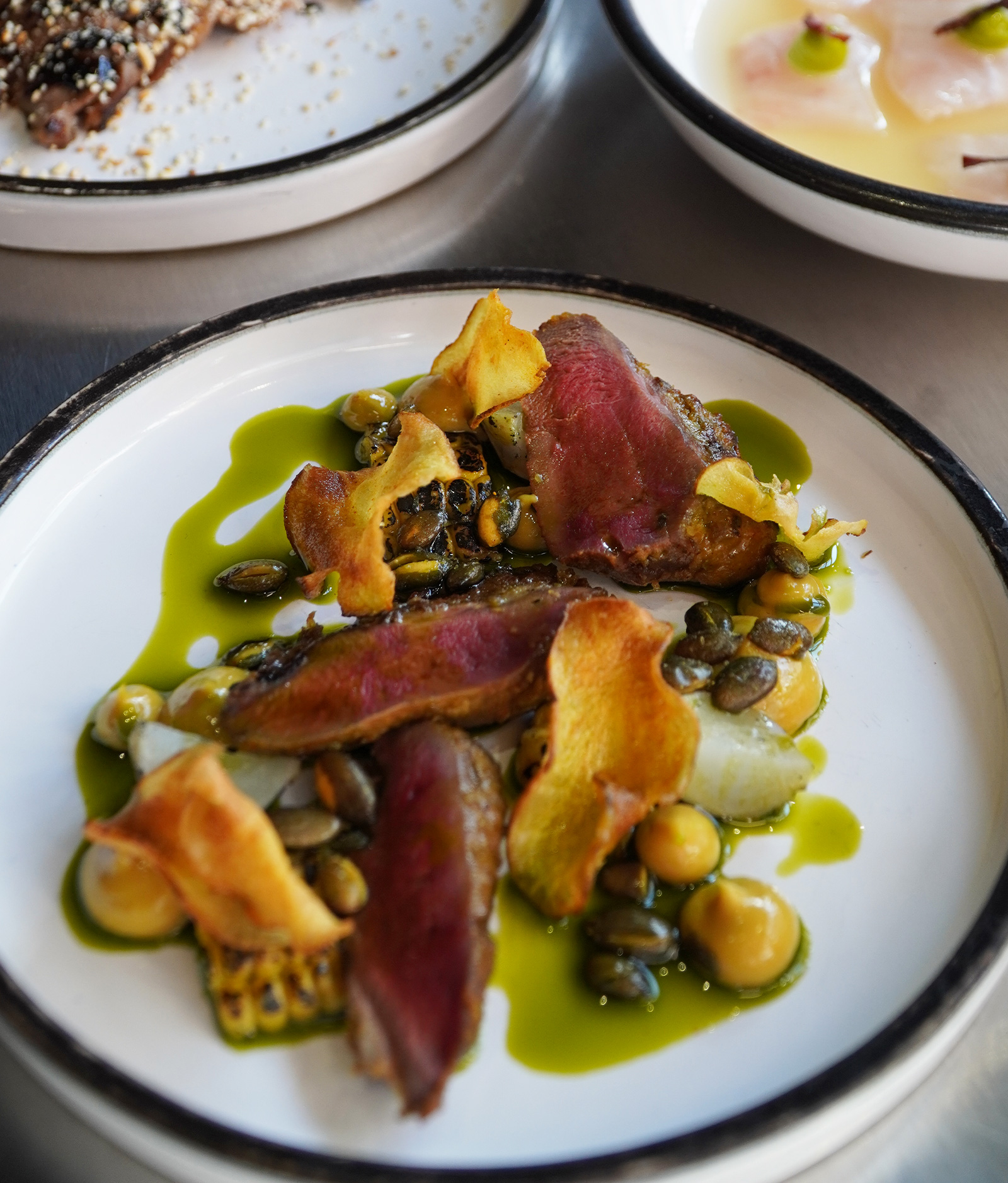 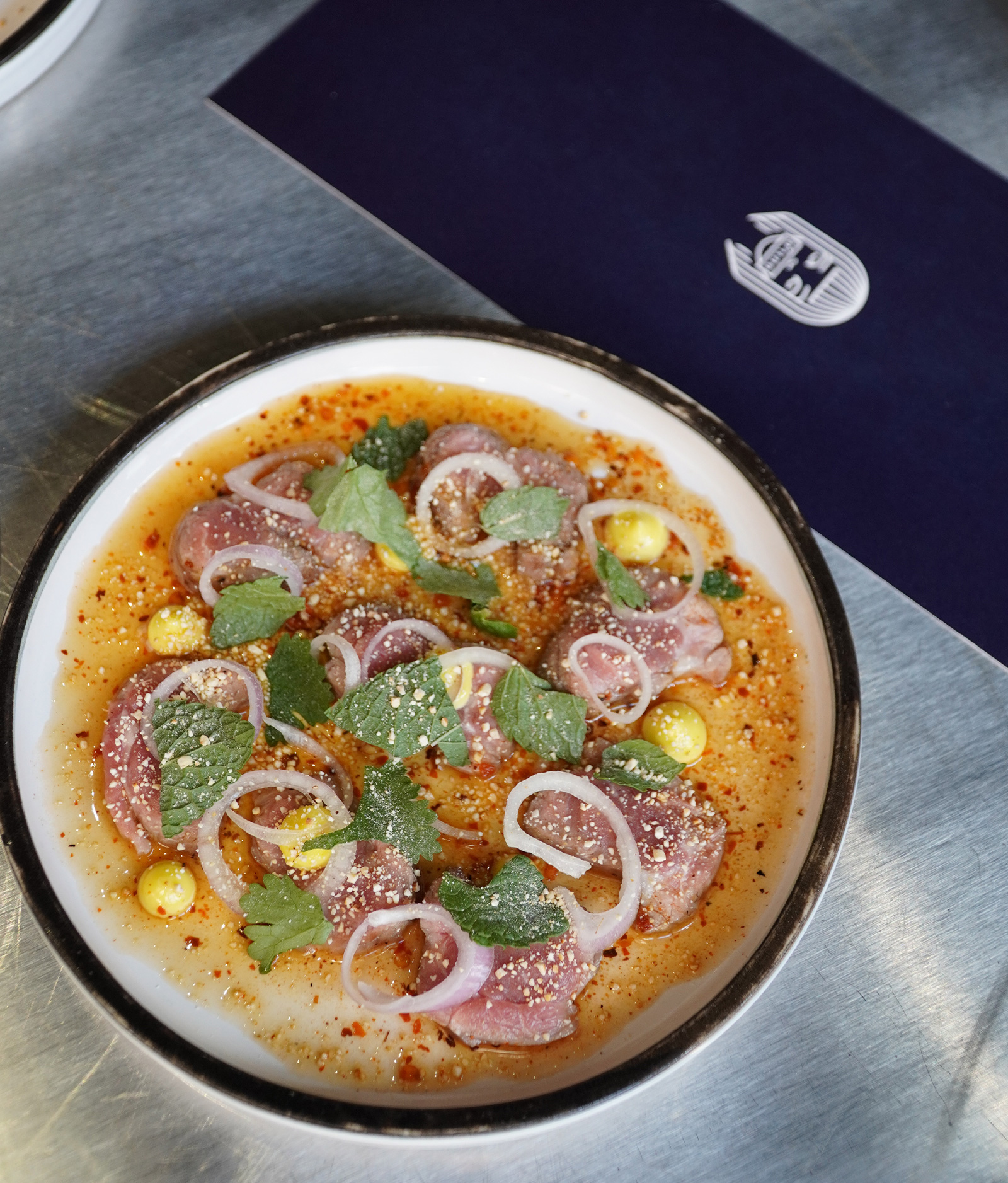 Onto the larger offerings, and the bar may be higher still. Meaty monkfish in a mustard-hued yellow curry sauce is accompanied by scallop dumplings and crunchy pork scratchings, delivering mouthfuls of seemingly disparate but beautifully balanced delights. There’s a hint of miso’s rich saltiness to the Thai oyster sauce (nam man hoy) our Kuronbuta Berkshire Pork Belly is served on, kale adding to the sense of being nourished with every morsel, birds eye chilli ensuring nobody’s forgetting this in a while. And similarly impressive greens come in the form of Wok Charred Brassicas — hailing from the cabbage and mustard family, when coupled with a healthy serving of fermented yellow beans the veg smacks like powerful kimchi.

“I think my favourite at the moment is probably the wagyu, it’s absolutely mega. It just won the Olympic Gold, which I didn’t really know was a thing. But it’s basically the best in the world, we get it from Freedown [Food], and they import directly from Kabushima in Japan. We combine it with massaman curry for a BBQ sirloin dish. Then all the trim we hand-chop down and make into mince, almost like a keema, which is served on a flatbread as a side. It’s a ballsy dish, you need a drink with it, but it’s amazing,” says Humphreys. After picking up on the not-so-subtle recommendation, we concur with what chef says. Cuts of intensely flavourful beef melt in the mouth, but are rendered surprisingly light in taste against that fat roti.

Our last gasp comes in the form of three perfectly proportioned desserts. Cracking open the passion fruit and calamansi Pavlova with butterfly pea flower reveals a tangy, delicate inside. The Iced Coconut Caramel topped with rice praline is a tropical sensation. 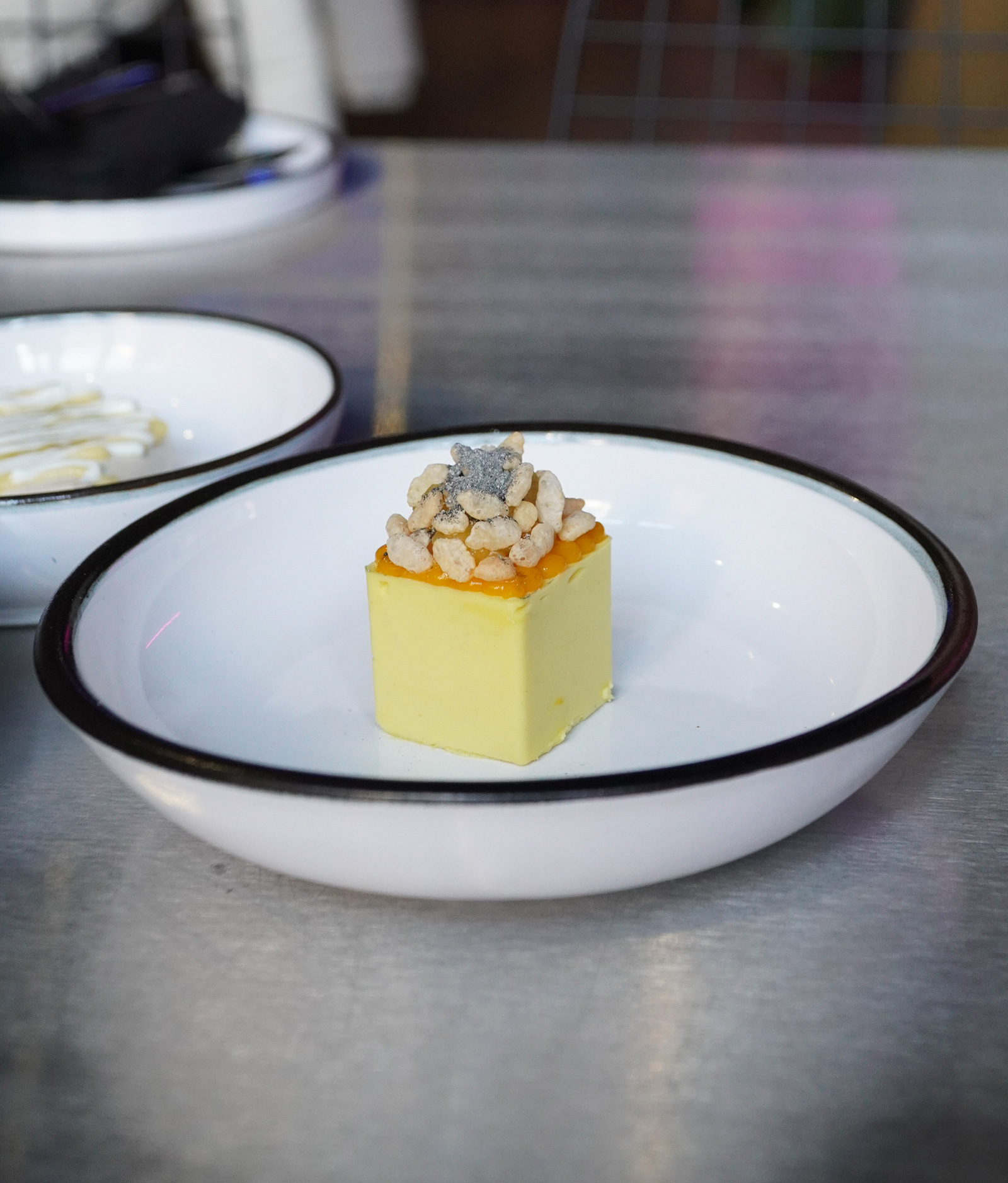 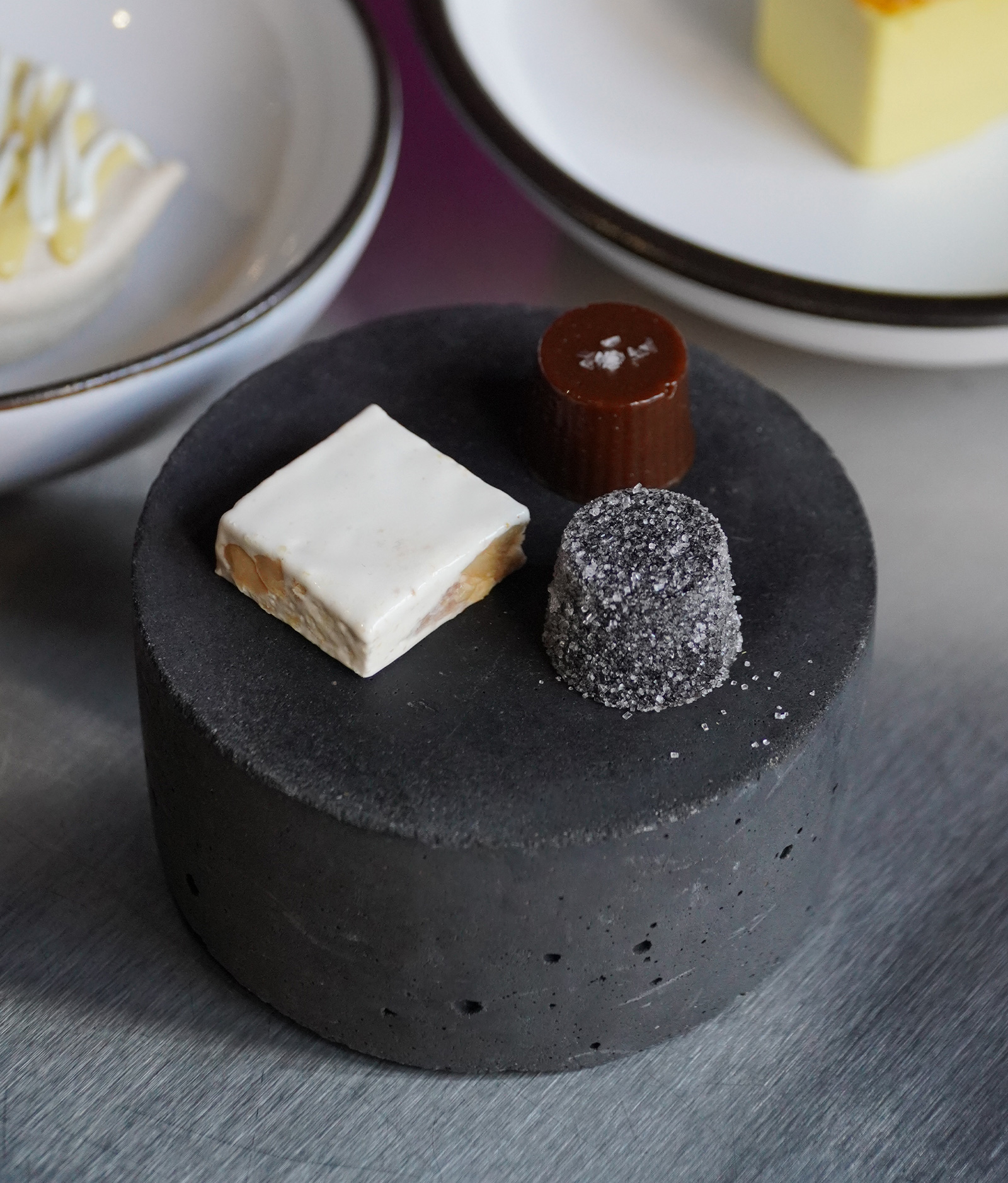 Book a table at District