12 Places to Watch the Football this Weekend

It’s not always easy to find places to watch the match, even in a city where arguably football is one of the most important influences.

Thankfully, Manchester has an array of varied establishments where you can cheer on either Manchester team or your own team whoever that may be.

Whether you’re red, blue, claret or white, the following list will help you find where to watch the match if you want mad atmosphere for Cup finals or derby’s or a quiet Monday night pint to watch a snooze fest between Crystal Palace and Watford.

Blackdog Ballroom NWS
NOT the Blackdog Ballroom in the Northern Quarter, which has pool tables but no TV screens, but on New Wakefield Street that will show all matches on Sky Sports and BT Sport. You can even play pool or sing karaoke post match, so you might as well set up camp all weekend. If you download the MatchPint app and check in at Blackdog Ballroom four times, they’ll give you a free pint on your fourth visit. For Sunday matches, you can enjoy their all you can eat wings deal for £10 all day long.

City Road Inn
You’d be forgiven for not hearing of this one, I personally hadn’t either until it became the most feasible place to jump off the tram at Deansgate-Castlefield when an important Euro match had already started. From the outside, besides its garishly large sign, City Road Inn looks like any old pub, and far too small to fit anyone in. However, once inside its kitschy decor and giant screens on both sides make for an entertaining place to watch the match.

The Footage
Boasting two of the biggest screens a stone’s throw away from the city centre, this converted cinema still has the old balcony to make for a better viewing of the match. It can get lively during FA Cup finals, but there’s plenty of space for you to enjoy the atmosphere without being covered head to toe in beer. There’s a selection of beer that they pride themselves on too, I might add.

The Friendship Inn
The Friendship, on the Manchester Derby Day, becomes wall to wall with a mix of City and United fans, all chanting and all intoxicated. It’s not often you come across a big city derby without any trouble, but in The Friendship, that’s exactly what you’ll get. The atmosphere on match day is unrivalled by other pubs in the Fallowfield area, so you’d be daft to go elsewhere.

Tib Street Tavern
Tib Street Tavern can go one or two ways when there’s a match involved. You can either enjoy their extensive beer selection on a relatively quiet Saturday, or you can’t make it through the doors as it’s overflowing with pundits seeking a venue to enjoy some of the bigger games throughout the year. They even have a seasonal menu that rivals any of the Northern Quarter bars, serving from 12pm – 9pm if you fancy watching the scores come in throughout the day.

The Lost Dene
Your typical, cheap and cheerful pub with tonnes of screens all over the venue, enabling you to watch multiple games, if this suits you. Cheap food, even cheaper drinks, smack bang in the middle of Deansgate, so easy to find. What more could you ask for?

Town Hall Tavern
Just round the corner from the Town Hall on Tib Lane, the Tavern is a fantastic place to watch the match on one of their many screens. It might not look very big from the outside but it’s got a real bit of length to it, with a great area towards the back which is perfect for watching the scores come in. They have also started serving Pieminister Pies – as if you needed any more excuses to go.

Courtyard
Be it a Saturday, Sunday or even midweek, Courtyard is electric when there’s a match on. This writer once got put into a friendly headlock when Man City won the League Cup a few years ago. When a goal goes in for whatever team (usually a Manchester side though), scenes look like something from a Wild Western. In a good way. A pitcher of beer will set you back a meagre £9, and a pint as low as £2.30, so there’s nothing stopping anyone from going this weekend, or immediately.

Second City
Second City labels itself the ’sports bar re-invented’. Understandable when it has late licenses for UFC, Boxing, NFL and WWE. As for watching the football, the venue boasts a 136 inch screen, 85 inch screen and 2×45 inch screens so that you won’t miss any of the action. There’s also FIFA set up on a PS4 for half time and post-match gaming. The bar boasts American sport themed cocktails for a reasonable price for something a little bit different to enjoy after the match.

Cafe Football
It’s a bar/restaurant/cafe located in the National Football Museum, called Cafe Football and owned by some of the lads of the Class of 92. Of course this is a great place to watch the footy, as well as enjoying some surprisingly excellent food. I suppose you can have a look around the museum once your game has finished, perhaps have a little kick around with the Goths outside.

Brotherhood of Pursuits and Pastimes
A new Sports Bar following from its founding establishment in Leeds, Brotherhood is a Sports Bar like no other in the city. For your serious fans of whatever main event they have hosting that week, you can request a table specifically to show that game, along with space for all your friends and drink / food package. They’ll even show some of the 3pm matches, something that’s becoming a bit of rarity in the centre. If you don’t want to book a table, that’s fine too, because there are screens from the ceiling to floor showing matches all weekend long.

Bierkeller
Here we’ve got a huge, cavernous space buried deep within the Printworks, with 3 differently themed bars all serving up fizzy lagers and boisterous shenanigans. The main pull is obviously the German Beer Hall, where you can dance on the tables while sloshing your stein all over the place, but there’s also Shooters Sports Bar for anyone who fancies watching a game or two. With more screens than Dr Claw, and plenty of booze and food it’s always busy with a great atmosphere to boot. 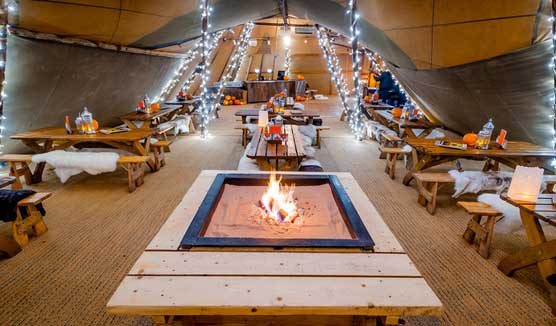 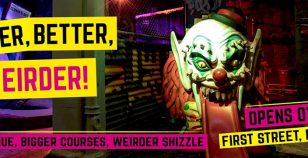 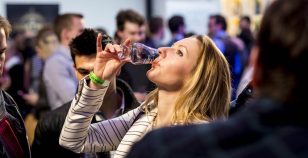 What even happens there?! We speak to Whiskey Jar about what to…