The Alchemist launches at MediaCityUK

The hotly anticipated Alchemist Bar and Restaurant at MediaCityUK is finally opening its doors to the public this evening at 5pm, and Manchester’s Finest were invited to preview what’s on offer.

This new spectacular space has been described by Simon Potts, Managing Director of The Alchemist, as having “a unique and visionary design aesthetic”, that sets it apart from the other Alchemist sites.

Hailed ‘the golden spaceship’, situated on the bridge in a a prime waterside location between The Lowry Theatre and MediaCityUK, The Alchemist stands proud as it foots the nationwide expansion of the specialist cocktail bar and restaurant concept.

Costing £1.2m, Head of Brand Jenny McPhee, hints that it’s likely to make it as the new flagship site. Larger than its predecessors, in Spinningfields and New York Street in Manchester city centre, this 4,900 sq ft space with almost 100 covers is poised to impress.

It’s all day offering of breakfast, lunch and dinner as well as the cocktails, set to excite with molecular drinks-making techniques, means it’s likely to attract those working in the surrounding MediaCityUK as well as the many visitors to the area.

Those familiar with The Alchemist will recognise classics on the cocktail menu such as the Smokey Old Fashioned and will be able to sample new additions such as the Battenberg (Appleton signature blend, Wray and Newphew, lime, pineapple, orange and almond air), too.

The futuristic building, with its bold and modernist features, has been purpose built for The Alchemist, the land having been acquired several years ago in anticipation of the resurgence of the area and the outdoor terrace offers sweeping views of the water and the surrounding area still gives a glimpse of the enduring and fascinating legacy of Salford’s industrial heritage.

Inside, North-West based Reid Architects have created a space that’s intended to be reflective of the energetic and creative environment in which it is located. There’s a sense of juxtaposition nodding to past and future with a glamorous-industrial feel with uses of angular blackened steel, bronze and gold across the bar, roof and walls.

The restaurant and bar is split into three distinct areas: an open dining area that looks out over the water, a bar area with stools to watch the bartenders in action (believe me, you’ll want to), and the outside terrace complete with parasols and heat lamps where guests can really benefit from its waterside location.

Established in 2009, The Alchemist at MediaCityUK is Living Venture’s eleventh Alchemist site, with ten others across UK city centres including London, Manchester, Birmingham, Leeds and Newcastle. This particular site has created 60 jobs in the area. Botanist, another of Living Venture’s brands, has recently opened in the area too.

Simon Potts, Managing Director The Alchemist says: “the team are really looking forward to welcoming everyone who works and lives in this vibrant waterside community.” 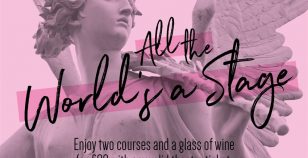 Menagerie Open the Curtain on a New Pre-Theatre Menu