This week saw the opening of Gary Neville and Ryan Giggs’ new Cafe Football, conveniently located within the National Football Museum and offering food, drinks and a family-friendly environment no matter what team you support – even if it’s Burnley.

Since opening in 2002, the Urbis building, jutting out of the ground like a smooth oddly-shaped ice cube, has gone through many iterations and guises. It began as a museum of inner-city life and from what I remember there were a few corking exhibitions at the time. As well as this, there was Le Mont on the top floor – a modern, swanky restaurant which I managed to impress a girl with while wearing some terrible Diesel jeans and a GHD’d mullet in 2004.

More recently this top floor restaurant became The Rabbit In The Moon, owned by the ex-United lads and offering an eclectic Asian menu from Michelin-starred chef Michael O’Hare. On top of this, Urbis became the National Football Museum in 2012 and has been doing rip-roaringly well ever since.

Now, Gary and Giggsy have opened up Cafe Football on the bottom floor of the Museum, which boasts 70 covers and serves a selection of comfort food which identifies with footy – but not so much that you can expect orange segments halfway through your drink and a bag of Pork Scratchings on the way out.

A quick look at the menu shows a wide range of dishes, including piled-up pizzas, some brilliant sounding burgers, posh kebabs and classics such as Fish & Chips, Flat Iron Steak and my personal favourite – the Scholesy. As an Oldham lad I probably wouldn’t be able to resist this mound of steak suet pudding, chips, mushy peas and gravy.

A shout out should also go out to Fatima Alkandari from Trafford College who won a competition to be on the menu with her amazing ‘Bobby Samosas’ packed with feta cheese, green chilli, pomegranate, soya sauce and pistachios.

On Tuesday, the Finest lads went down to the opening of Cafe Football with the Class of 92 and had the chance to speak to Gary Neville himself and even though he was probably mortified both by our lack of professionalism – it was a very informative look into what he enjoys in Manchester, as well as what’s in store in the future.

Thanks for agreeing to chat with us Gary, and to be honest you’ve already answered my first question when you were up on the podium talking to everyone – it was just a general introduction to Cafe Football and what you have going on. So I’ll think on my feet and say; let’s say someone has never been down here before, what kind of things do you think can motivate them to come and try Cafe Football?

I think to be honest with you, I come out to Manchester to eat probably 2-3 times a week and I must admit that around here is not usually a part of town that I’d usually come to but as you can see out of the window, you can see that there is actually a really decent public space outside…

Yeah and when we came 6 months ago a lot of that work was still in progress and we wanted to come here to help make it a destination that people can come and enjoy – like Spinningfields. I suppose The Printworks has been a popular destination for years, and but even with the work they’ve done over there [at The Corn Exchange] it’s still in the early stages – but it’s definitely changing.

It gets a lot of wind through here though so we may have to work a little bit on the wind breaks so that maybe we can use this area, Cathedral Gardens, as a nice big green space and a fantastic place to sit. We’ve been thinking about the potential of perhaps putting tables and chairs out there as a way to activate the area and make it amenable to people.

There was the very successful Italian Festival here this weekend, so it definitely has potential…

Exactly, and it’s my view that Manchester should become a festival and Market city and we should extend that so it includes every week of the year. We should fill the city all the time with markets and with events because ultimately you can notice it in the city. When I come here on Sundays it can be a little bit quiet and i think if you put things on all the time, it’s going to bring people in.

It’s also much better for independents as well, it’s much easier and cheaper to have a market stall than it is to own or rent a space, which will mean more options for diners etc…

Obviously the success of the German Markets at Christmas, I just don’t understand why they don’t continue right through into January, as soon as they go everyone is just disappointed. So keep them going all year I say.

You mentioned there something about coming into the city to eat, so we’re going to ask you about your favourites here. Can you name us three restaurants in the city, one where you would go with your missus, one with your mates and one for family?

With family, to be fair I like Fumo, they do the little plates…No I’ll tell you where. I’ll go with El Gato Negro with the family, and I’ll go to Tattu with the missus. We went there on Sunday actually, I love the lads there and I really like it, it’s brilliant. They’ve got the best quality fit out of any place in Manchester in terms of quality and spec – the joinery, the bar, everything is amazing. Their attention to detail is amazing. I went to the Tattu in Leeds too actually last week, and they’ve done a really good job with that one too.

Even the toilets are amazing!

Yeah, yeah they are. Thinking about it, even historically, I like Evuna over on Deansgate, the missus and I love it, even Tapeo too. I’d like to go to Umezushi too but I’ve not been yet, apparently it’s amazing so I’d like to go there. With my family I always go to Puccini’s in Swinton, all the time – but they’re a bit out of town. Oh, Nutters as well with the missus, love it there.

How are you balancing having a career in the media, owning shares in a successful hotel, creative agency and a football club, as well as being a family man?

First off, my football is all finished now, I’ve done with all that stuff. The media though, that does take up a lot of my time, but I’ve got it so that every other day I will be concentrating on the businesses, the developments and the hotels. I’ve enjoyed it so much, it’s a massive thrill to me. I was ready to finish football, I was blessed and privileged to do what I did but in the last couple of years I needed to do something different, I had my injuries, I was playing poorly, and I’d sort of moved into a business mode.

All my businesses are in Manchester predominantly so I want to just keep going and I love it, I love doing it. And I’ll tell you something, I’ve always loved the city, probably since the age of 16-18 when I joined United and started coming out here but I love it more now – I love it more now every year than the previous year, it just keeps getting better and better.

There’s a lot about the city in the past few weeks which has brought us together – there is no spirit like the Manchester spirit is there, and as you say – the city just seems to get better and better.

You are pretty famous for cutting one liners and quality quotes – have you got anything you could give us tonight please mate?

A quote? Here we go; if you go into a restaurant and they fuck up, they should pay for it. Seriously, if I get a negative tweet in the hotel or something I will send it straight to the Managing Director of the business and say – deal with that and we deal with it personally. You have to deal with people personally which is why I’m always big on giving the personal touch.

We’re number 2 on TripAdvisor with our Hotel in the whole of Greater Manchester out of I think something like, 300 hotels. King Street Townhouse is number 1, we’re number 2 and we always tend to deal with every customer personally, and the team is absolutely brilliant but if you fuck up – you should pay for it. I hate it when restaurants just don’t accept their mistakes.

I don’t tend to complain, I tend to just not go again, I don’t’ send food back because I feel a bit bad – I just won’t go again.

Well that’s one of the biggest impacts of social media on the hospitality industry, you can communicate directly with the hotel or restaurant and everyone can see it.
We were thinking that social media has changed football massively, and it’s also changed the restaurant industry hugely too, all it takes now is for someone to go into your place, take a picture of the food, and your food in now instantly transported to anyone all over the world who wants to see it.

How disappointing is it in your life, when you might be going out with your mates, or your family, and you’re going out for a meal and you have a bad one?! How bad’s that! It’s so disappointing and you think – that’s a waste of a night and I think that is why we tend to go back to the same places because we trust them.

What do you think of this beer then? (Cafe Football Beer, brewed by Seven Brothers)

Red Wine. I love red wine. My favourite region is Tuscany and I love Antinori especially Tignanello but when I went to Spain, very briefly for four months, I absolutely fell in love with Spanish wine.

Rioja and Tempranillo that’s it for me, they’re my favourite of all time…

Yeah, Rioja, it’s so smooth, and it’s lighter than the Tuscan ones.

From here on the interview descended into talks about Love Island and television so it’s probably best to stop it there. What we did touch on were the upcoming projects that Gary has been involved in around the city and there’s a fair things to get excited about.

There’s Mahiki coming to the old One Central site just behind Albert Square which has been a massive hit in London and Dubai and promises to bring a proper party atmosphere back to the old Romp-ing grounds.  There’s also the widely publicised remodelling of the old Stock Exchange building into a boutique hotel and a rooftop bar called ‘Are Friends Electric‘, which will bring this former building back to its stunning glory.

Cafe Football is open now, Monday to Saturday from 8am til 11pm, and on Sunday from 10am to 6pm. The cafe also has a commitment to show all varieties of live sport, staying open late on Sundays for international fixtures.

The festive period at Federal 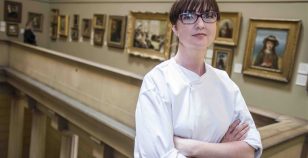