A Guide to the Best Mexican Food & Drink in Manchester 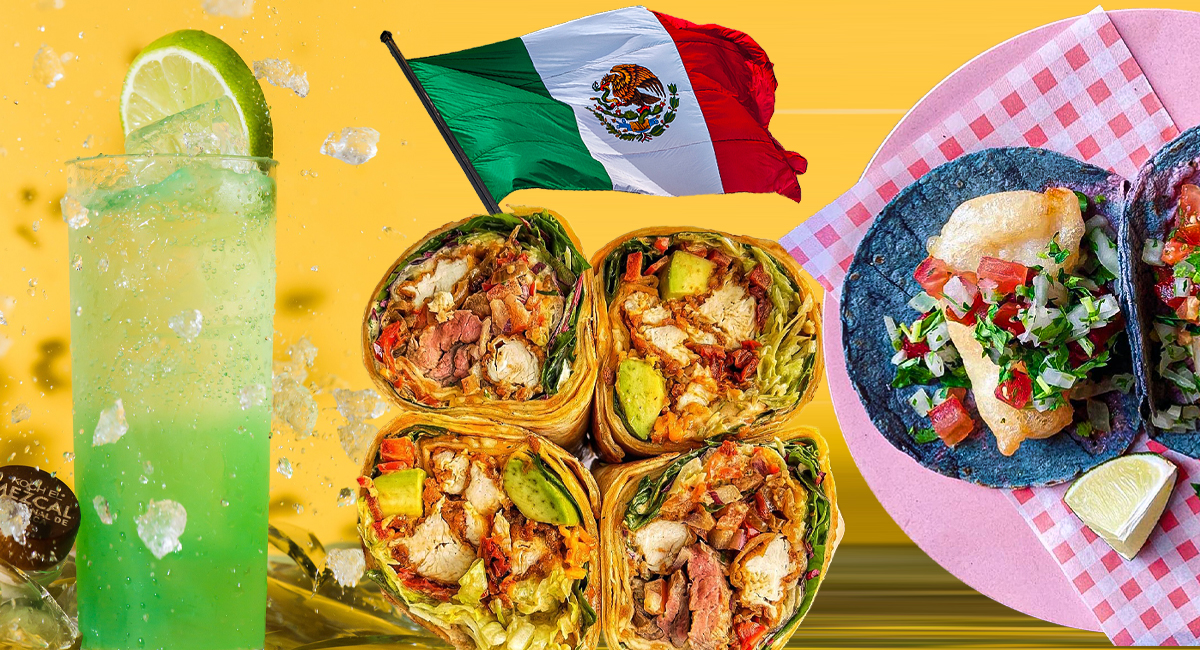 Okay, I understand that some of these dishes and offerings aren’t actually ‘officially’ Mexican – but are in fact – ‘Tex-Mex’ or ‘Cali-Mex’. But Manchester is severely lacking in what people would call true, ‘proper’ Mexican restaurants, and has done for years.

But who cares, especially when there’s such a diverse and exciting range of things on offer? Tacos, Burritos, Tequila, Mezcal and loads more – the city has some truly wonderful Mexican joints – so celebrate Cinco de Mayo the best way us Brits know how – by drinking and eating too much. 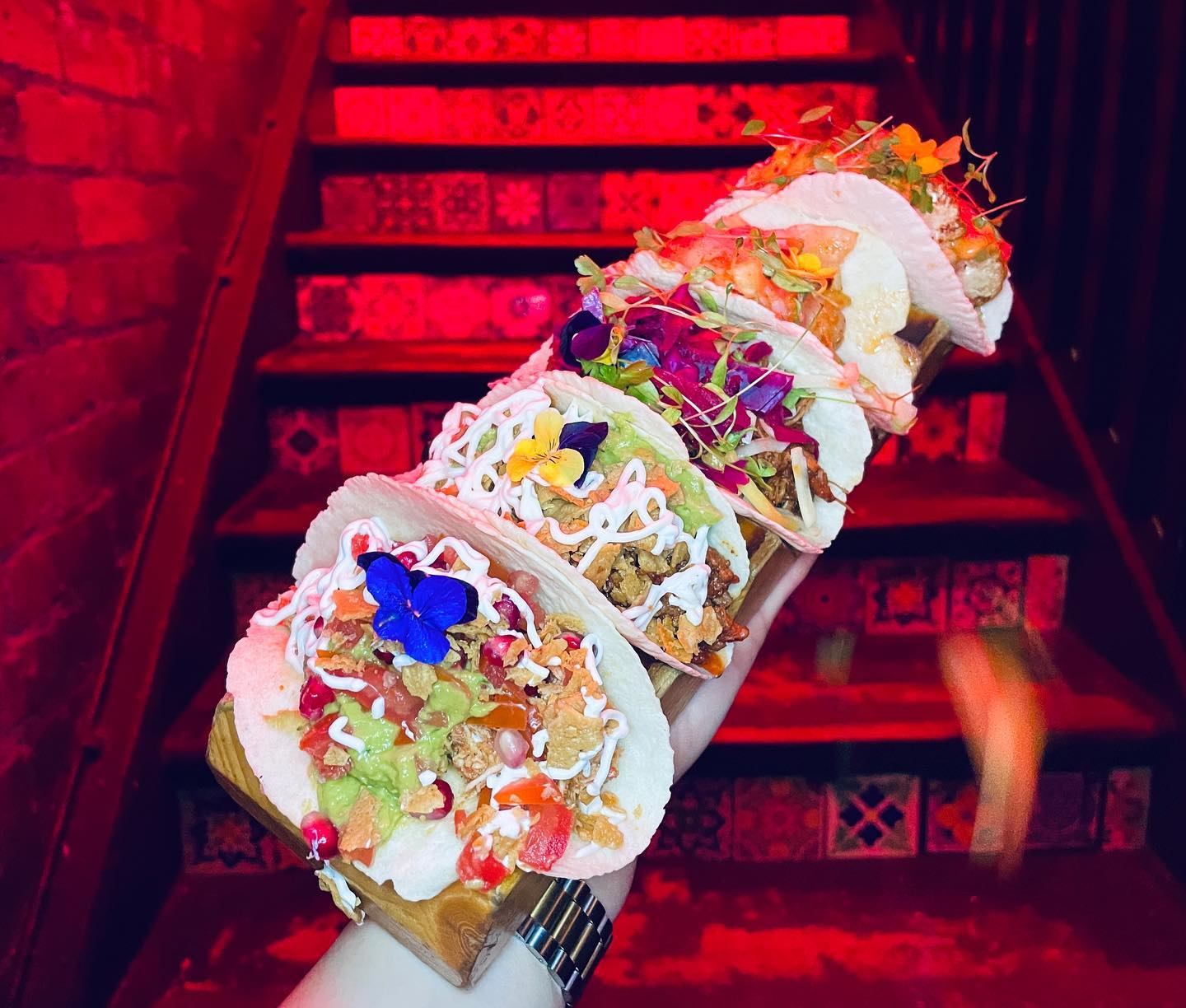 El Capo
Pretty much a Manchester institution nowadays, El Capo is still serving up fantastic tacos every single day in the Northern Quarter, alongside a long list of tequilas and cocktails too of course. From 5pm every Tuesday and Wednesday you can get their tacos for as little as £1 – it gets really busy though – so best head there early doors. 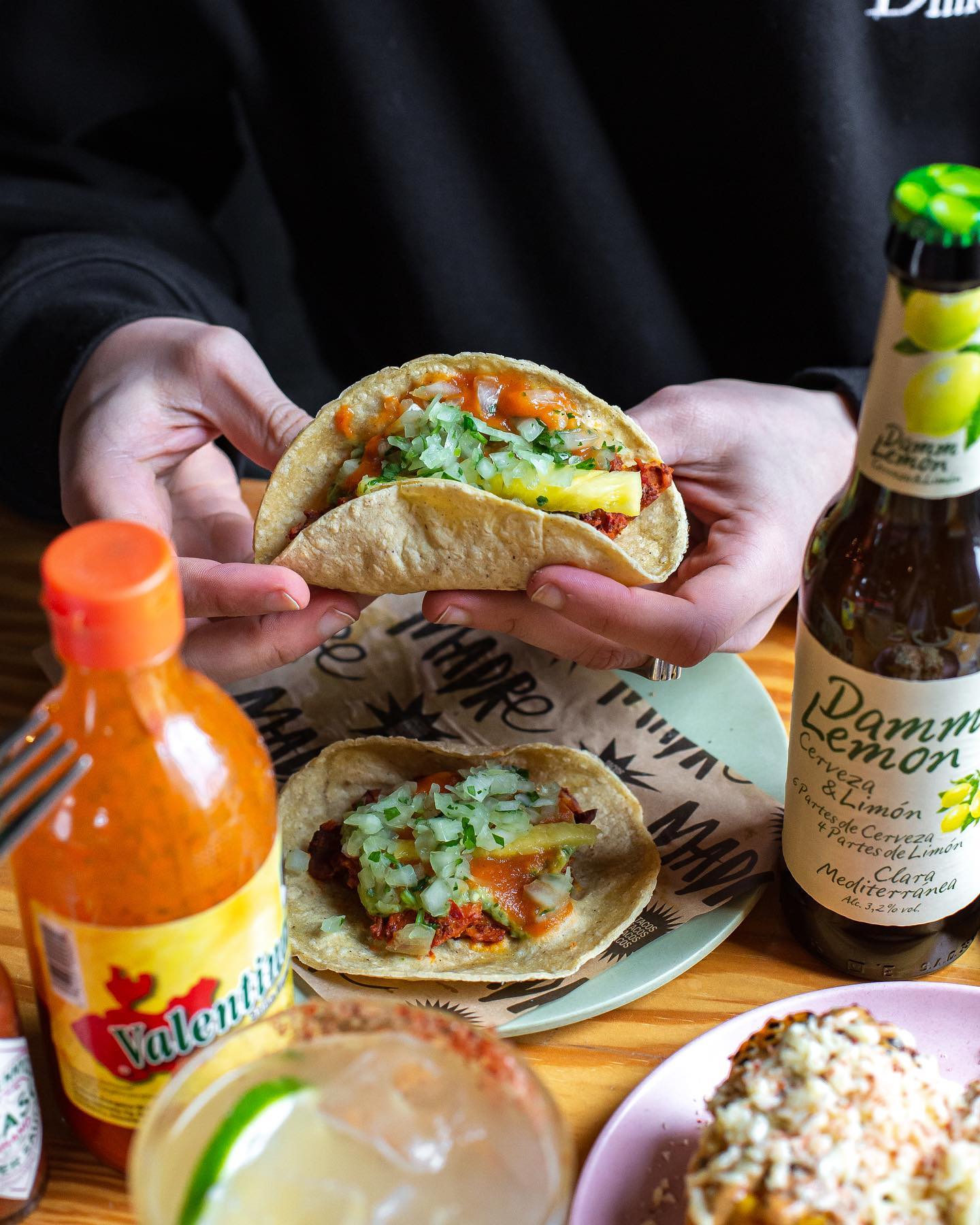 Madre
Madre joined the roster of food and drinks at Escape to Freight Island, serving up Asado-inspired tacos in mid-2020. They’re set to open up their very own place at KAMPUS at some point over the next few months too. You’ll find a menu full of delights like Baja Fish Taco and Fried Chicken tacos. These beauties are authentic, tasty and literally the perfect food to scoff whilst sitting down and watching a show. 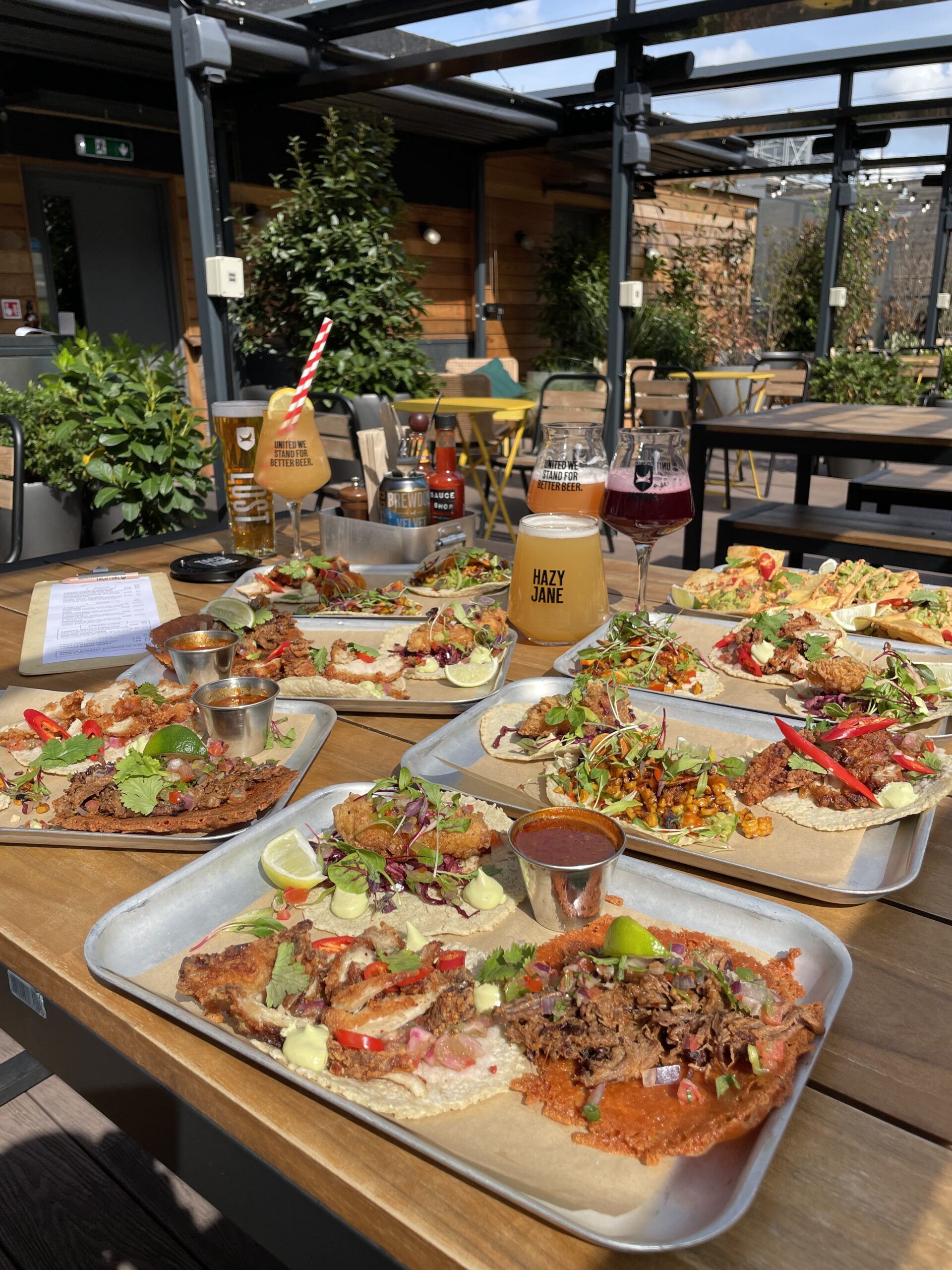 The DogHouse
BrewDog’s new Manchester hotel and bar features a fantastic rooftop terrace, which itself includes a ‘Taco Hut’, should you want to soak all of that beer up with something Mexican and delicious. They do ‘Dorados’ up here – which are like normal tacos but instead of a tortilla shell – it’s fried cheese. Yes, they’re as good as they sound. 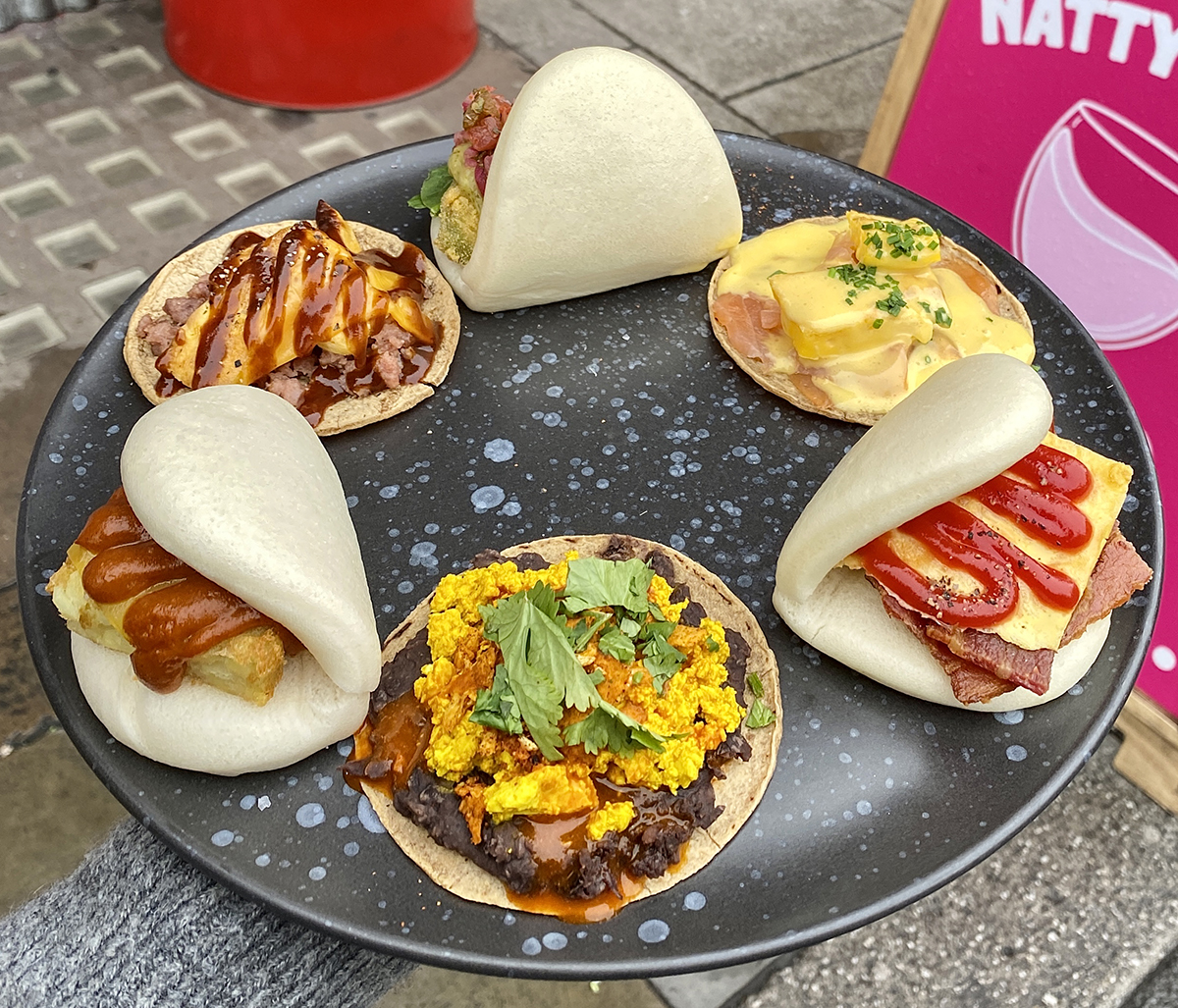 Wolf at the Door
Home of £1 tacos and bao buns, Wolf at the Door is one of my personal favourite haunts. They’ve got all sorts of special tacos on the menu including a special breakfast Sausage & Egg McTaco from last year that we can only pray makes a come back. You’ll also find the likes of Taco Masala, Jerk Chicken and Char Sui Mushroom. 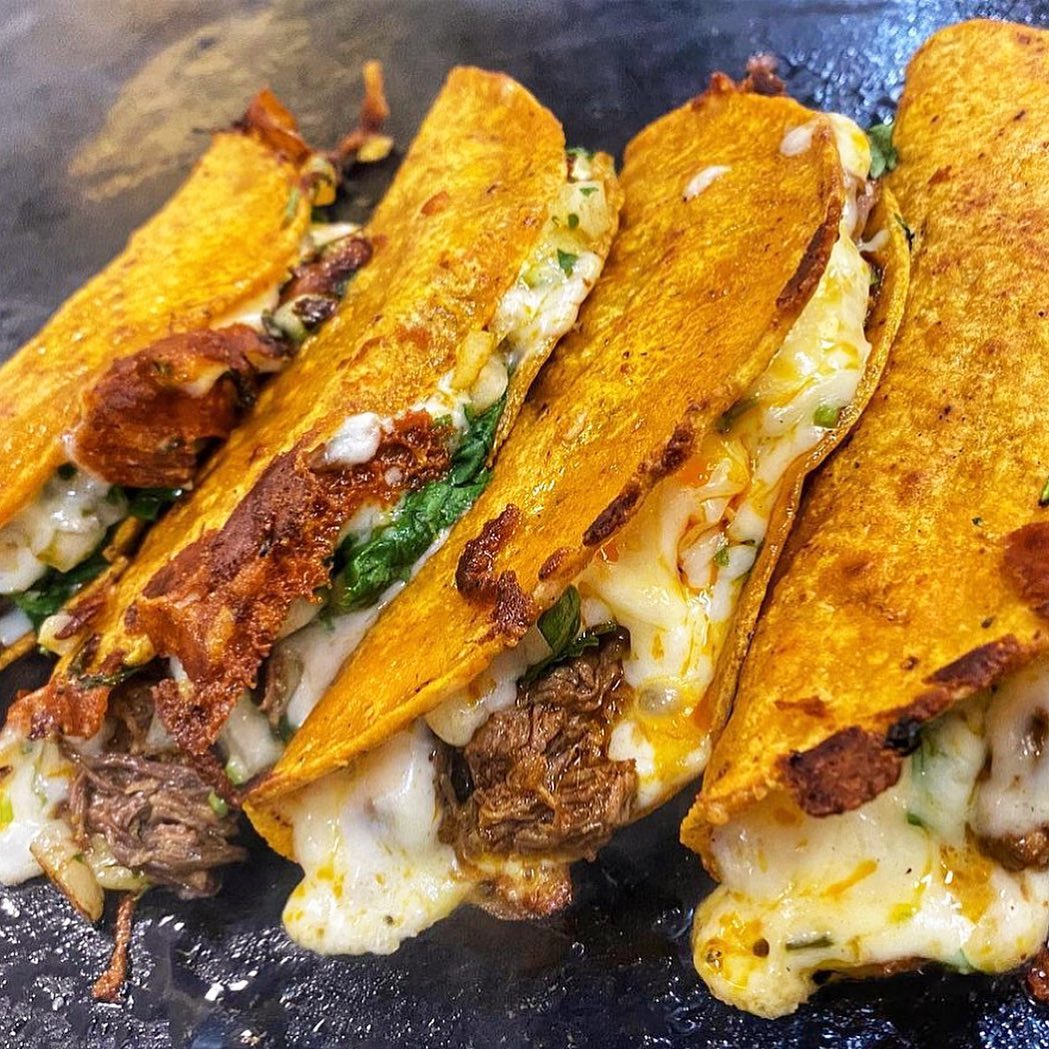 Birria Brothers Tacos
Home to the most perfect hangover cure, Birria Tacos. Featuring a rich beef stew stuffed in soft corn tacos with plenty of Oaxaca cheese. The whole thing is then fried and served with a pot of rich, spiced consommé for extra dipping and extra flavour. They’re serving out of Koffee Pot, appearing every Thursday – Saturday from 4pm. 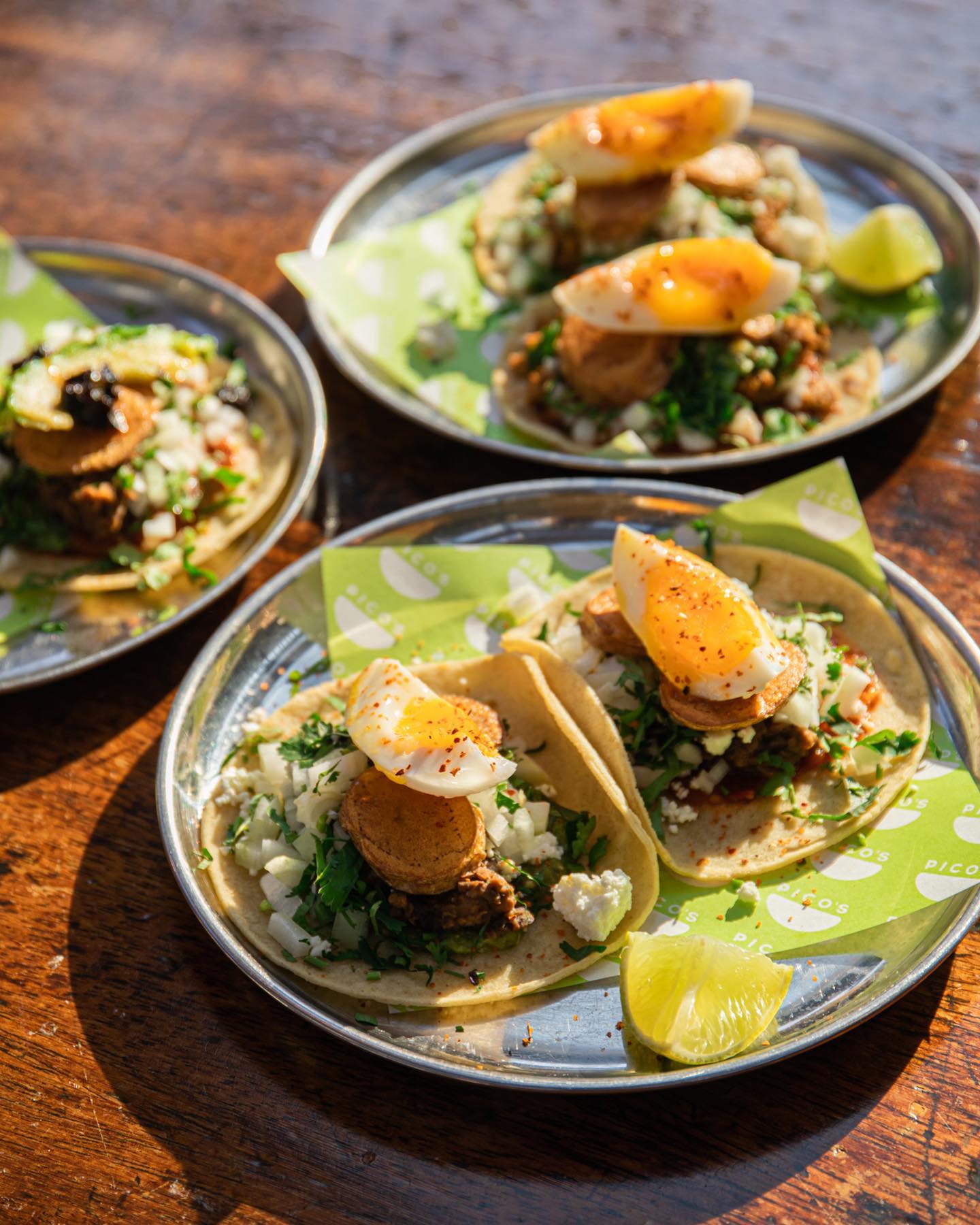 Pico’s Tacos
Homemade tortillas, tacos, frozen margaritas and plenty of nachos at Altrincham Market and Mackie Mayor. You’ll find a range of tacos on the menu – all served piled high. Expect the likes of The Pork Al Pasto, Slow-braised, spiced lamb shoulder, Charred Sweet Potato and plenty more where that came from. 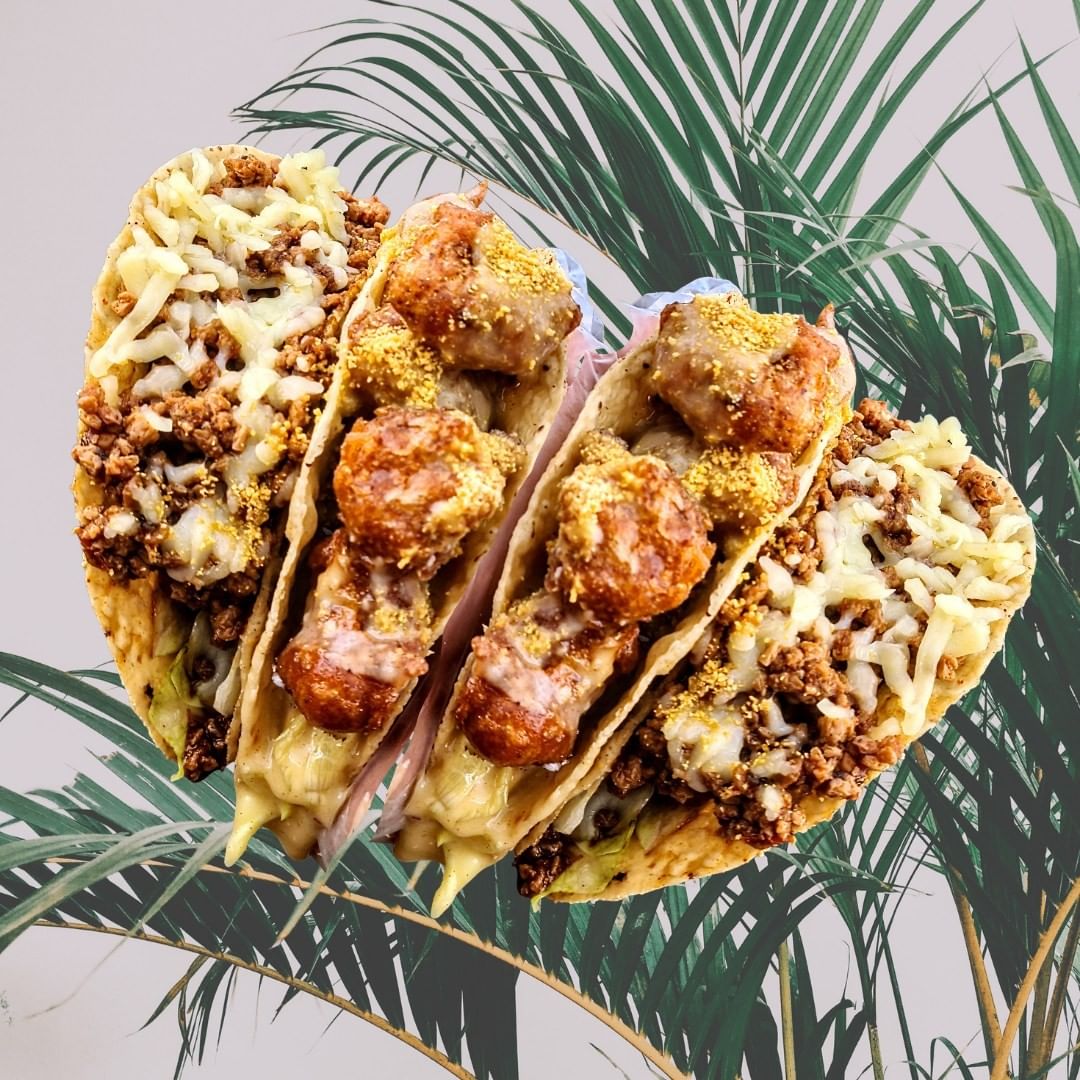 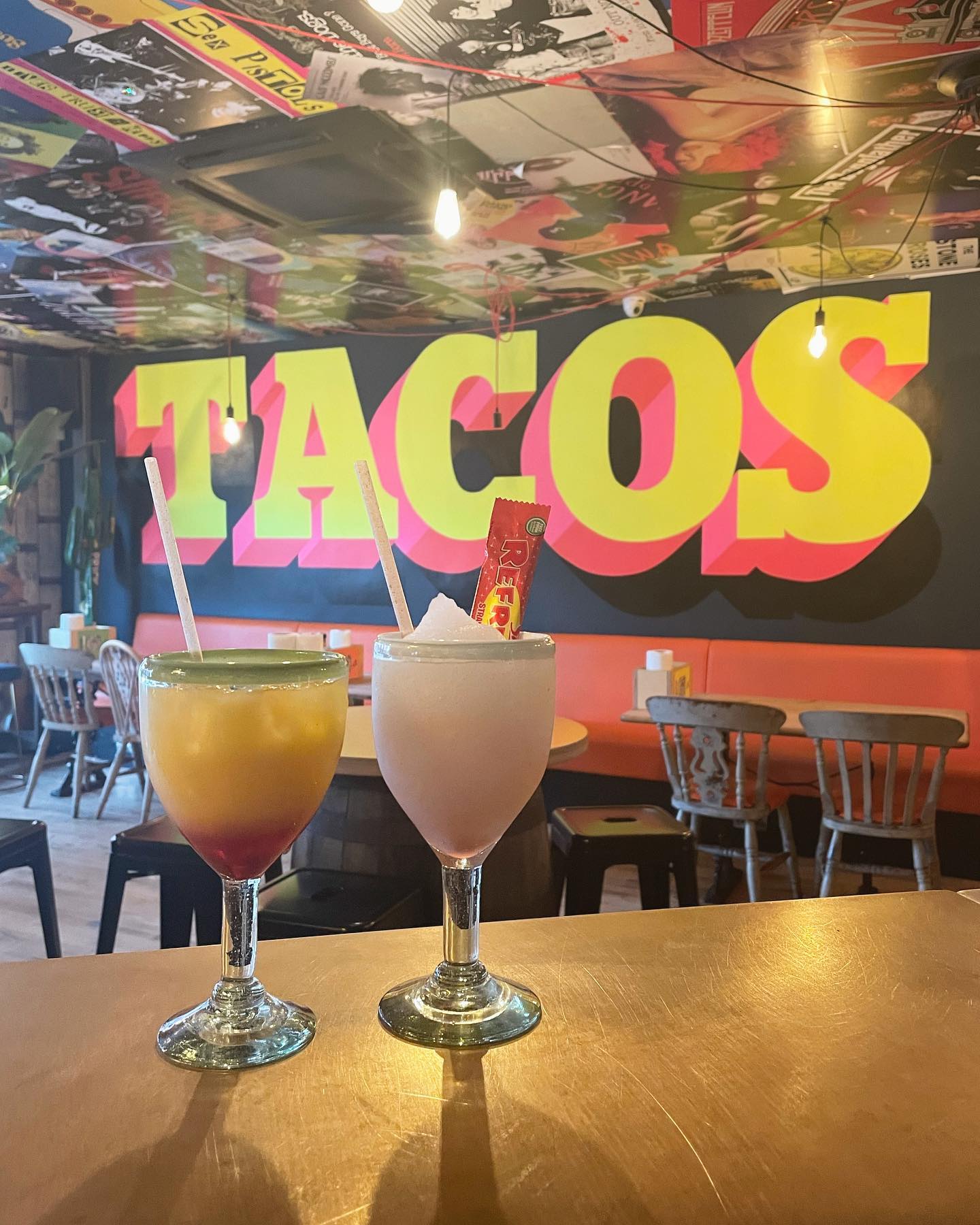 Southside Tequila Joint
Southside Tequila Joint in Withington puts a Mexican twist on everything on their menu. They boast one of the best selections of tequila in the country with a whole host of well-known and not-so-well-known brands available. They’ve got a cracking food menu too for when you’ve had one too many – with tacos starting from just a quid. 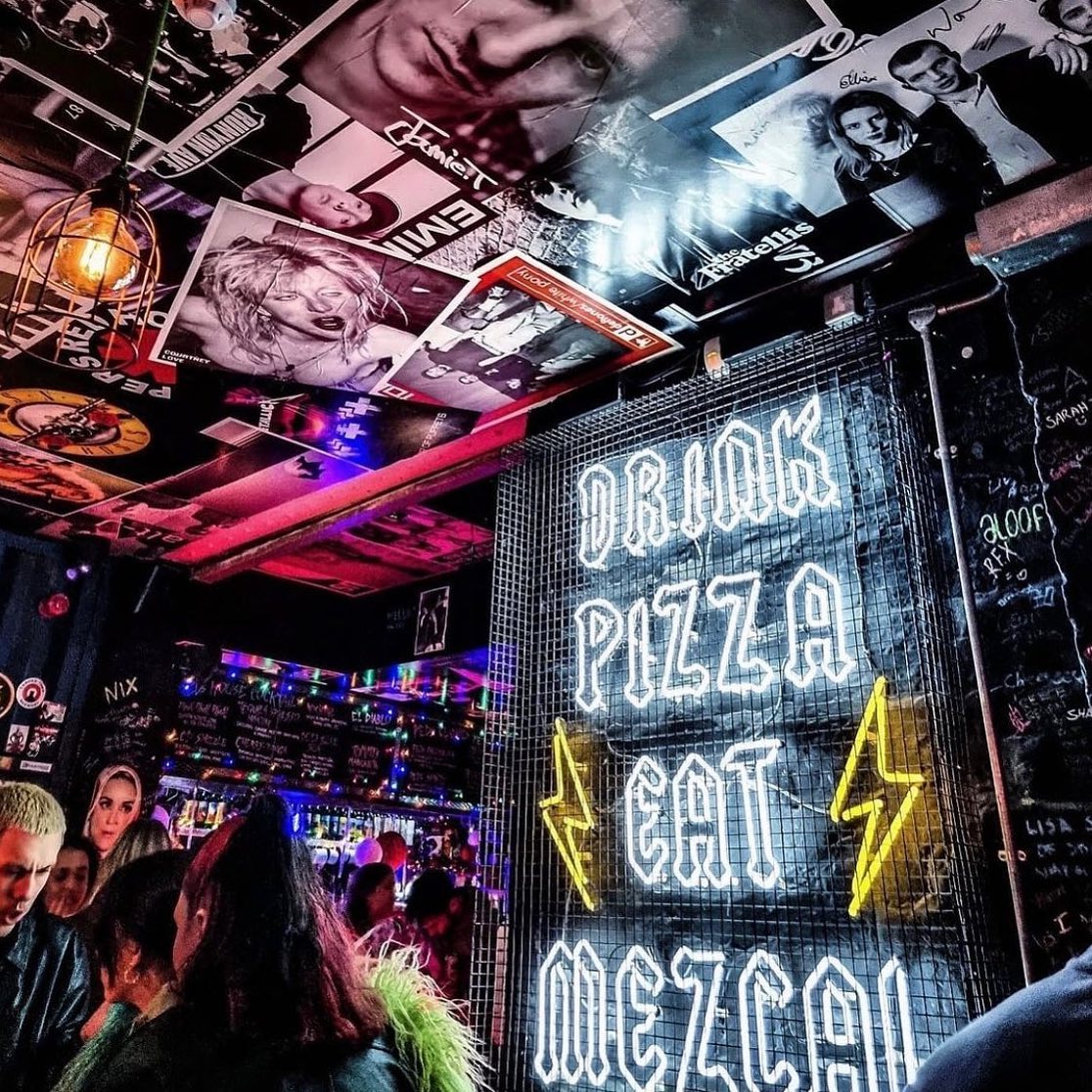 Crazy Pedro’s
Yep, this might be a part-time pizza joint but Pedro’s actually has a fantastic and colourful Mezcal menu. Plus they have loads of frozen cocktails that will get you basically hammered. 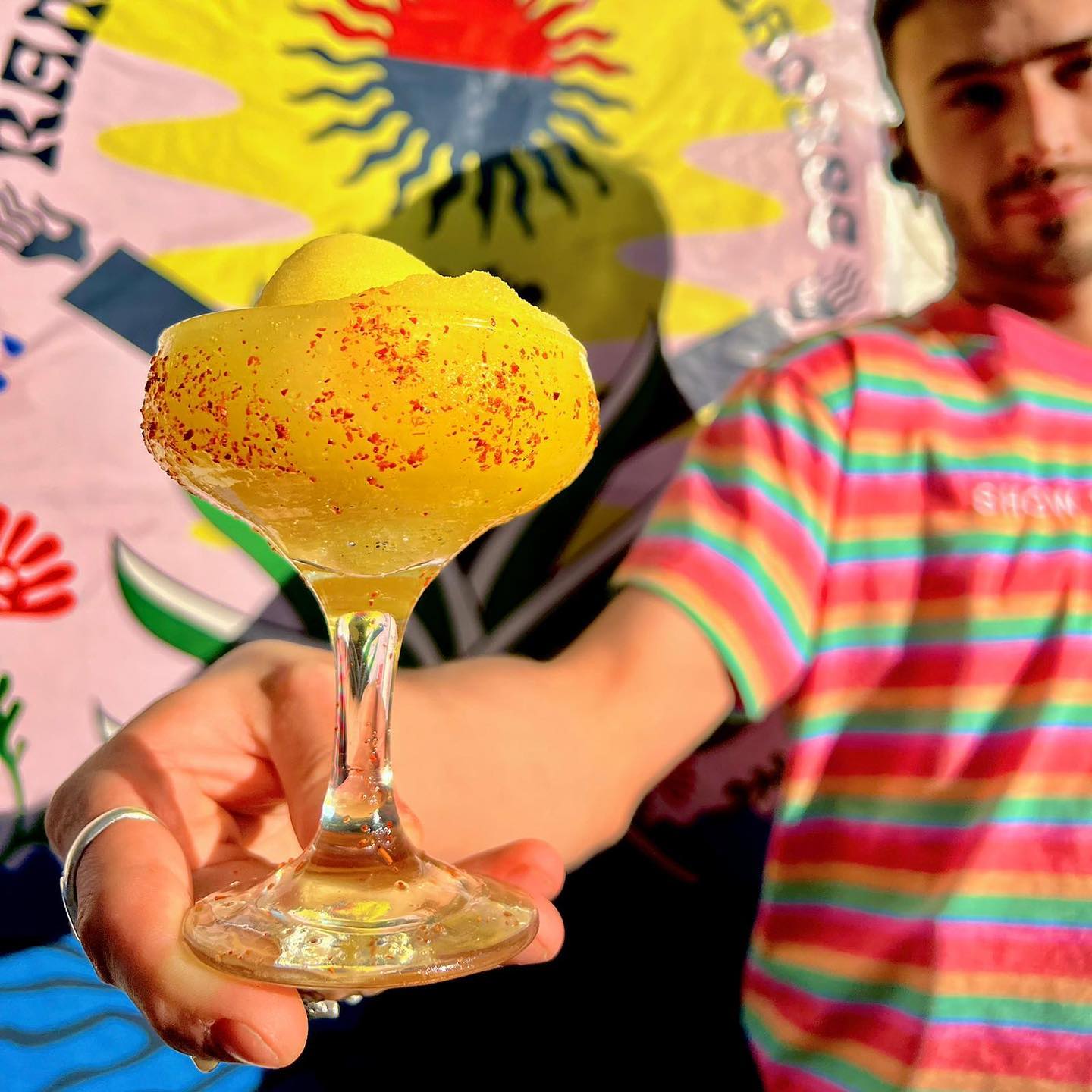 Ramona
Ramona specialises in Detroit-style pizzas – so what are they doing in a round-up of Mexican places? Well, they actually have a dedicated Margarita Bar with a very impressive menu of tequila and mezcal cocktails. Wednesdays you’ll find that Margaritas are £5 all night, and on Sundays, they have Bottomless Pizza and Frozen Margaritas for just £27pp. 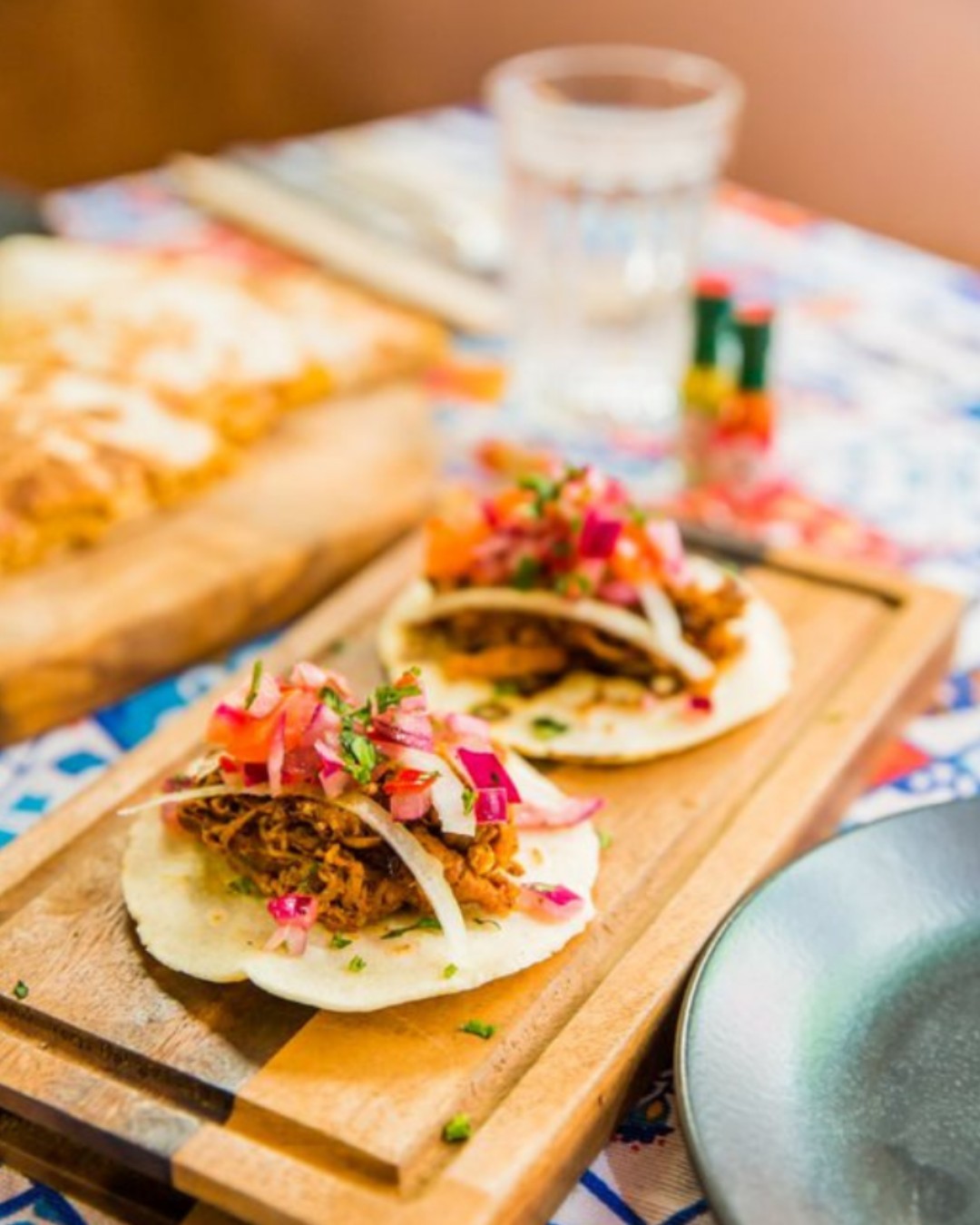 Sandinista & Taco Cantina
One of everybody’s favourite Mexican bars in Manchester has plenty of tequila inspired cocktails, including one mixed with Aperol. There’s also the ‘Taco Cantina’ serving up some delicious Mexican delights, including Burritos, Quesadillas, Nachos and Tacos (obviously). 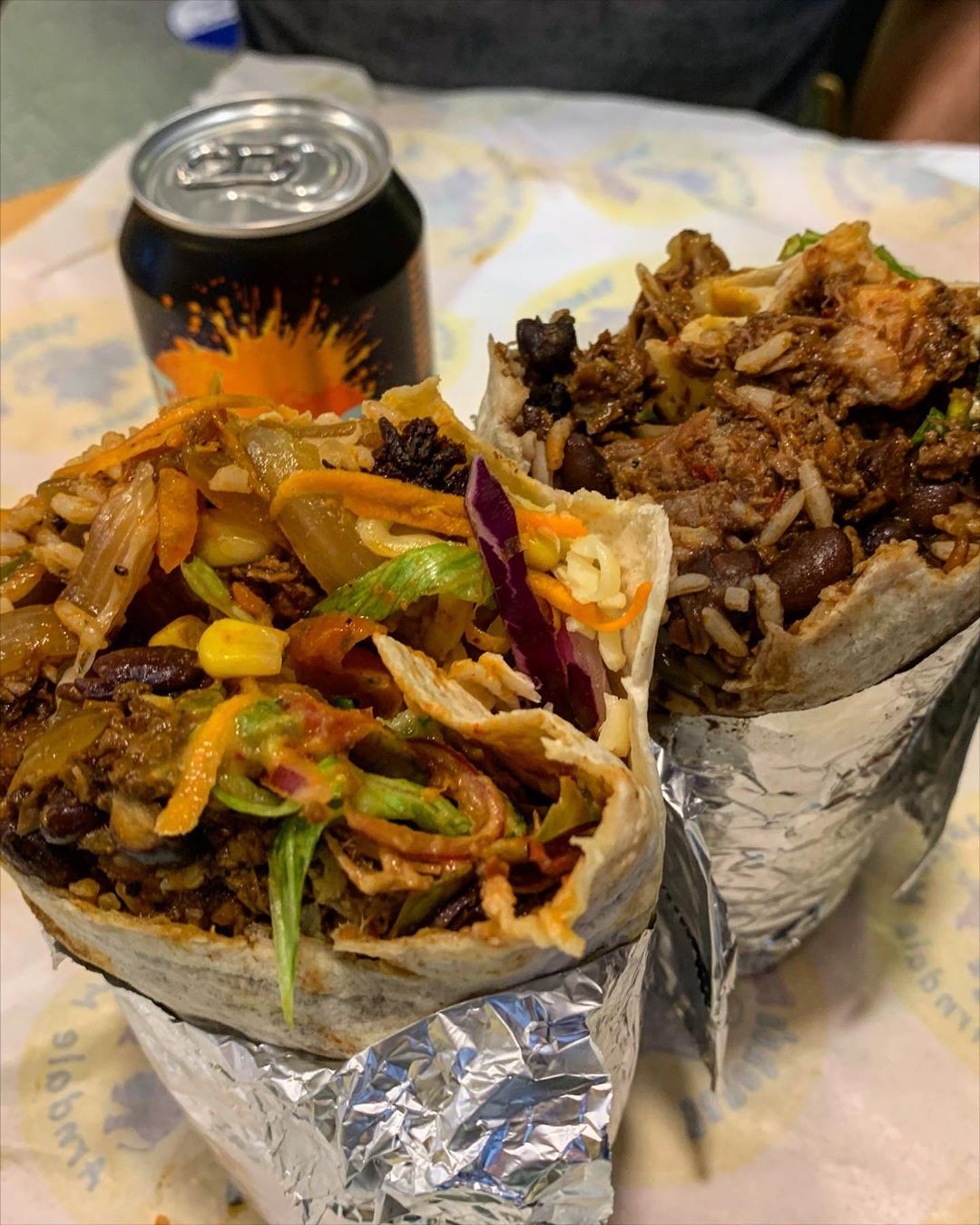 Pancho’s Burritos
One of the most authentic Mexican experiences in Manchester is Pancho’s Burritos in the Arndale Market since 2009. Their burritos are absolutely massive and you’ve got a choice of everything from a large range of salsas to the tortilla itself. Pretty much a Manchester institution now – and they even serve up Mexican soft drinks, beers and their tacos are also banging! 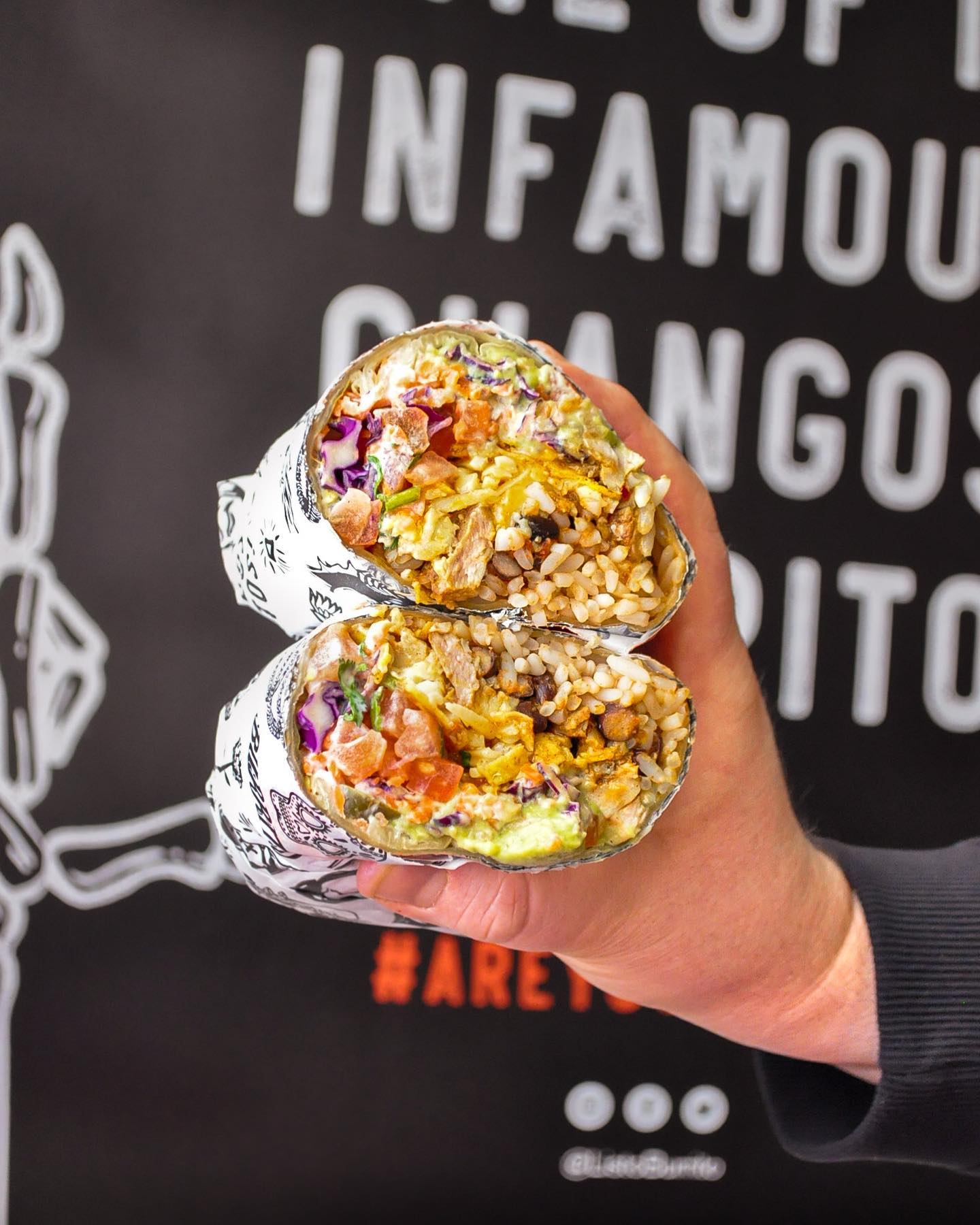 Listo Burrito
The famous Chango’s Burrito Bar had a facelift back in January 2020 (pre-pandemic – if you can remember that!). You’ll find them on Oxford Road (or The Burrito Corridor as I like to call it). Many people say that Listo is the greatest Burrito in Manchester, and it’s certainly up there in the top 2. Personally though – Pancho’s pips it every time. 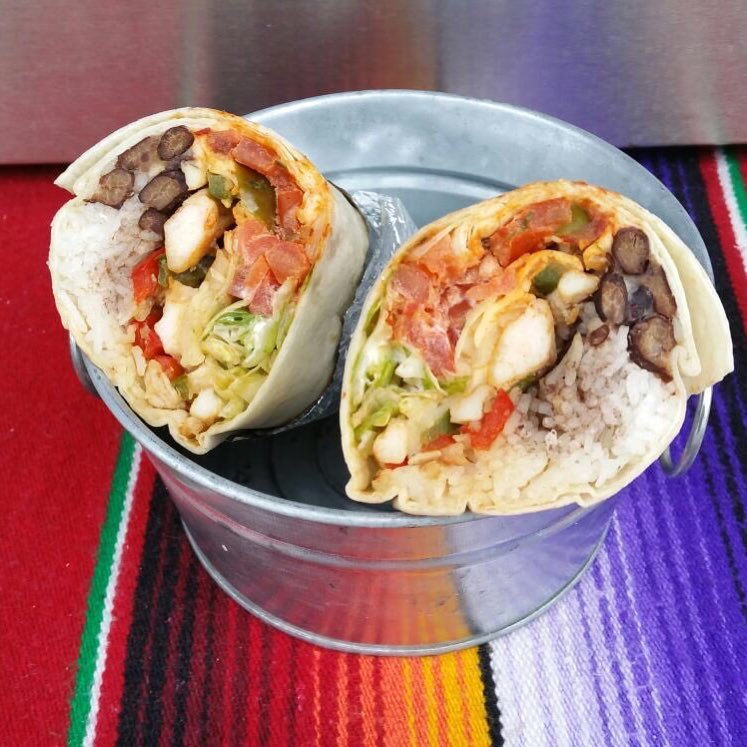 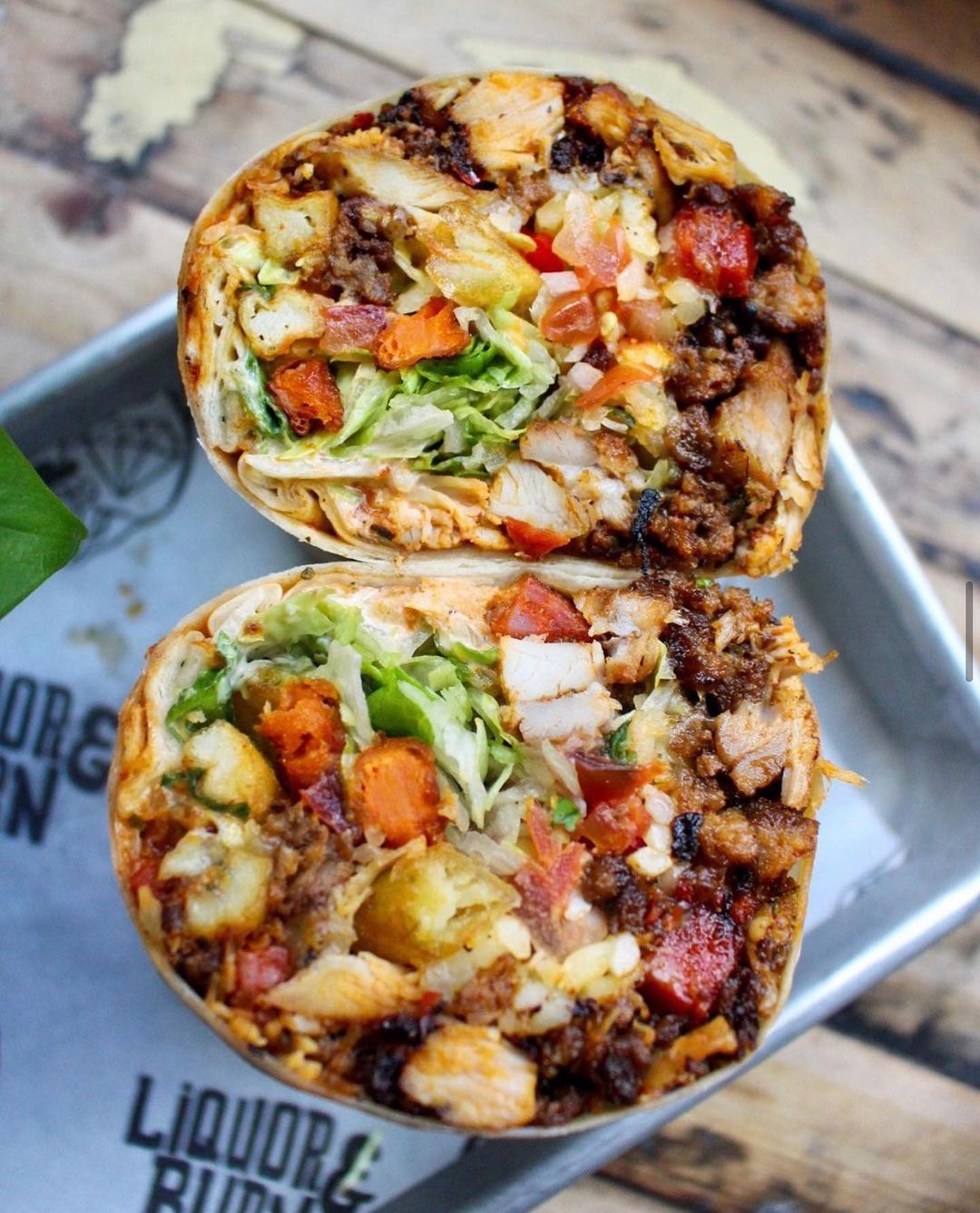 Luck Lust Liquor & Burn
Okay, once again this place isn’t exactly Mexican – definitely more of the Cali vibes in here, but who cares when the burritos are this good?! These burritos are the definition of ‘dirty’ filled to breaking point with meat, cheese, and tonnes of sauces. Their tacos are great too – especially their famous ‘Cheeseburger’ taco. 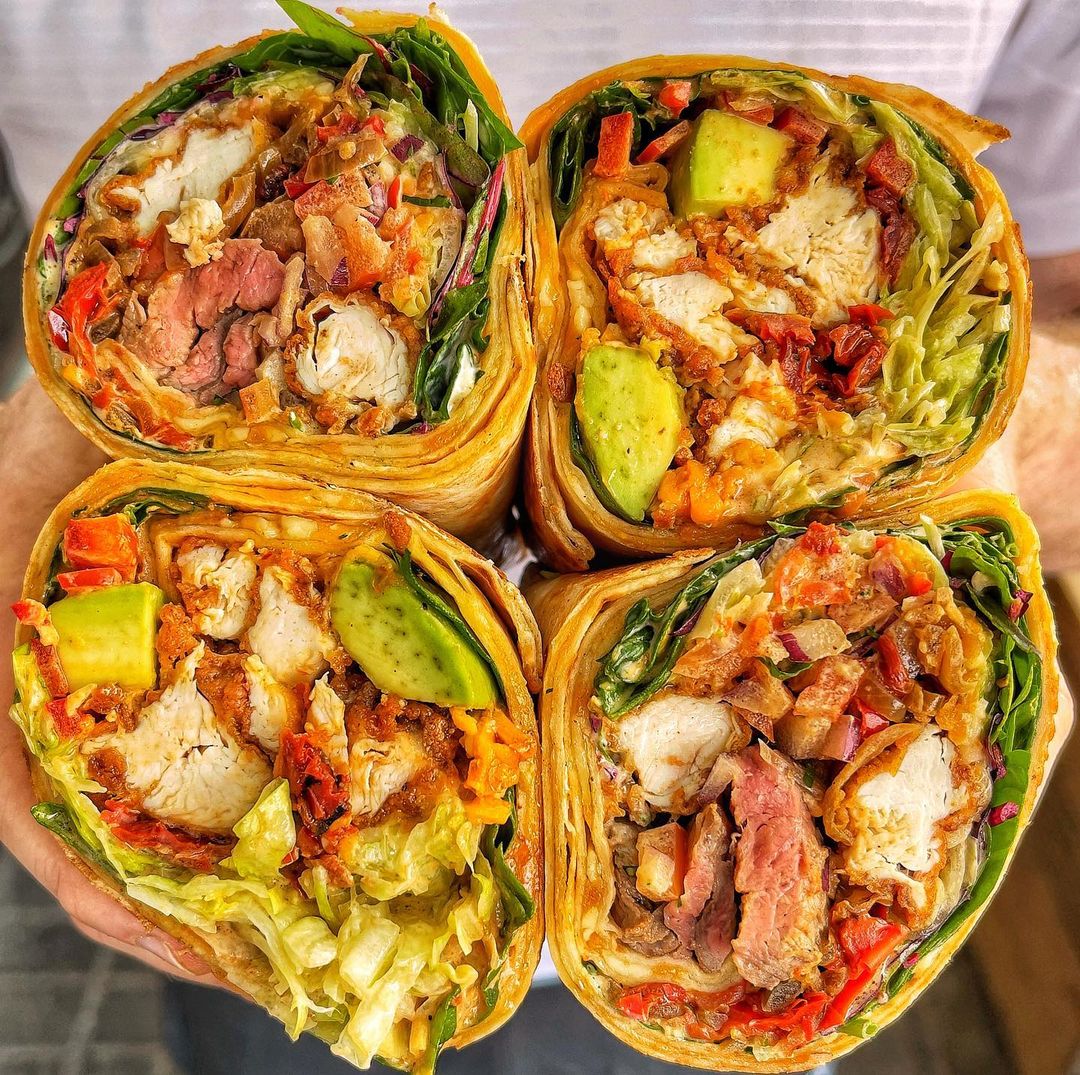 Brewski
About as Mexican as Uncle Sam flying a bald eagle whilst firing an assault rifle into the air – it doesn’t really matter when these burritos are THIS good! Brewski is well known for their highly Instagrammable food – and these burritos are no exception – filled to breaking point with an array of delicious fillings. The ‘Brewski’ is best with crispy beef, pork belly, mezcal BBQ sauce, jalapeños and their homemade hot sauce. 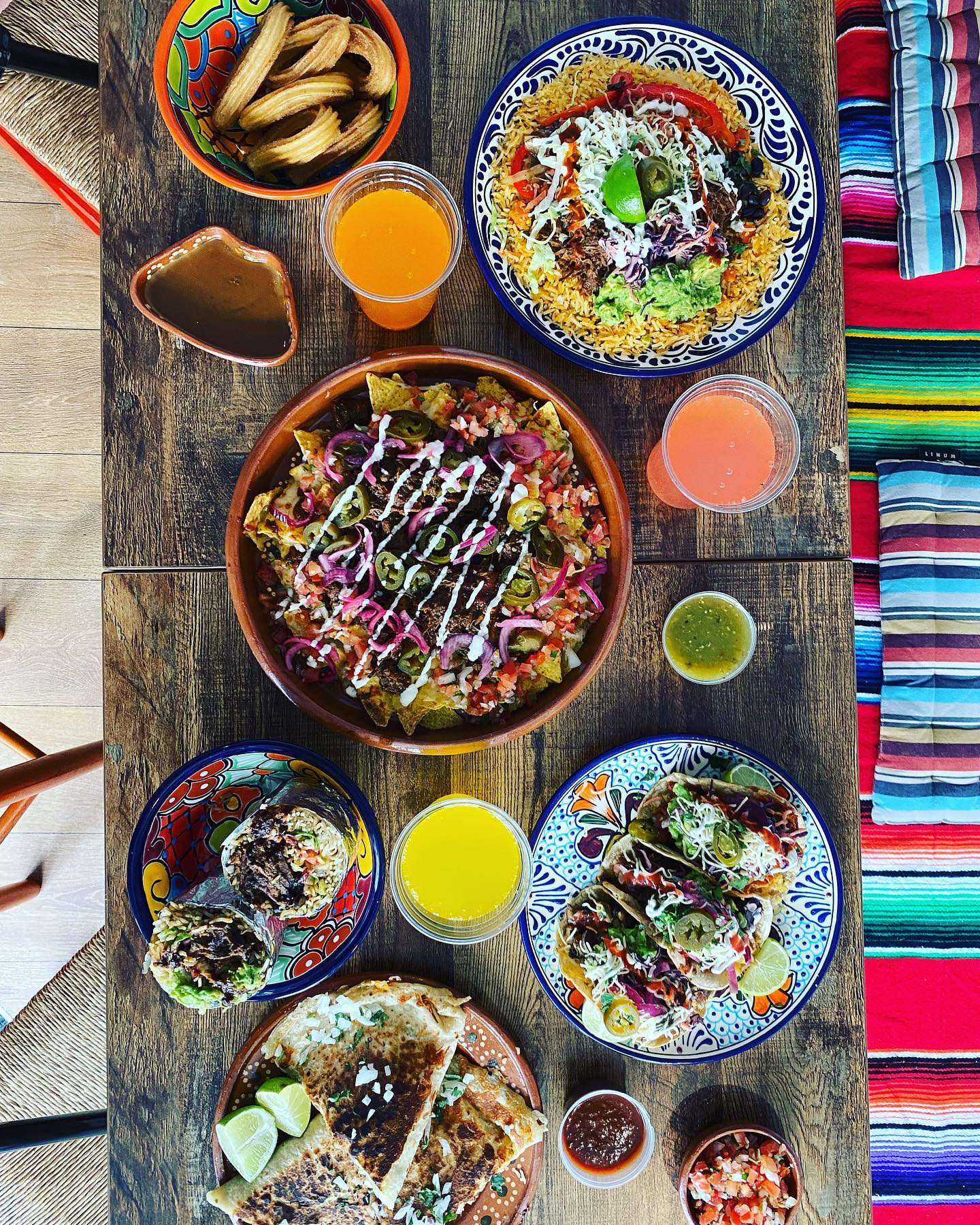 Chilli Tortilla
A family-run favourite in Altrincham, Chilli Tortilla is an excellent taco and burrito spot, and I didn’t know which category to put them under so they’re in ‘Burritos’. Alongside some very good tortilla-wrapped monsters, they also do the popular ‘birria’ tacos fried with cheese and gravy, nachos and more. Well worth a visit.