It's not every day that you get to try a cuisine as unique as South African, but with Chakalaka, you actually could.

Most people’s experience thus far in their lives of South African cuisine (unless you’ve actually been there) is probably Nando’s. I can hear you all saying “But Nando’s is Portuguese you idiot, that’s why we boycotted them for 5 days when we lost to Portugal in 2006”.

Well, Nando’s is actually all the way from South Africa, but that’s where the similarities with Chakalaka end – as this great little neighbourhood restaurant is as far removed from the huge chain as you can imagine – and it’s all the better for it.

Chakalaka has been on Oldham Street for just over a year now and we decided it was time to head down and see what all the fuss was about.

Since trying a few dishes when they first opened, there have been considerable changes to the menu and knowing very little about the intricacies of South African food, we ventured down to check it out.

The restaurant itself is a quintessential independent venture, it’s small, it’s charming and it’s the brainchild of a small, dedicated team.

As we entered the brightly adorned and intimate setting, we were seated by Director Stewart Dean, someone who wanted to bring a taste of South Africa to the streets of Manchester.

And indeed he has – and there’s no other place like this anywhere in the city or even further afield. If you’re still yet to visit Chakalaka I implore you to give it a try – the food is unlike most things you’ve ever tried before.

Named after a simple but very tasty South African side, Chakalaka adheres to its namesake in many respects – it’s fiery, refreshing and will give your taste buds a serious shaking up.

We started with something a little bit familiar to us in the form of a Jaffle with cheese (£4.50) which is essentially the kind of toastie that you’d make at home after a night down the pub. They stuff the two pieces of bread with the aforementioned Chakalaka however, creating what can only be described as an exotic spicy cheese and bean melt – the ultimate comfort food if you ask me.

Additionally, we tried the Cheesy Maize (£4), small balls of fried maize filled with cheese and resting on, again, chakalaka. The theme was pretty much the same, cheese, tomato, spice – this time with each moderate morsel offering a welcome burst of salty, cheesy goodness.

Alongside both starters we shared the Biltong Selection (£7) a mix of traditional South African dried meats, that I must say represent some seriously good value for money – considering any visit to Tesco for Biltong (or jerky) usually leaves you well out of pocket for small morsels of dried out old boot.

In comparison these sticks were a revelation, offering up flavours that the store-bought stuff can only ever dream of.

On to the mains now and this is where things get a little bit weird – but in a good way of course. One of South Africa’s most famous dishes is Bunny Chow (£10) a hollowed-out loaf of bread which is then filled with a variety of different curries and fillings.

A fast-food classic down in South Africa, it originated in the 40’s among the community of Indian people in Durban, the coastal city on the east of the country. As you’d expect, there are many varying accounts of where it came from and when, but it’s not something you should bother stressing about – especially when it’s sitting right in front of you begging to be eaten.

On this occasion we went for the Cape Malay Chicken curry filling, a suitably spicy creation that’s complemented with potatoes and sweet mango.

The Indian influence is certainly there and for £10 I must say that this meal is truly substantial and fantastic value for money. With plenty of chicken and what I would consider to be the perfect level of heat – this is a true signature dish and certainly a ‘must eat’ on any visit to Chakalaka.

With the food I was sinking some rather special South African beers, of which you’re unlikely to find anywhere else in the city and perhaps even the country (well, maybe London). I bloody love tucking into local beers and this one, Castle Beer is fantastic. I also added a few ciders to the roster too – Hunters Gold is heaven.

Back to the food and Alex’s attention was being taken up with what to the untrained eye could just be Hot Dog and Chips, which it sorta is but it sorta isn’t. You see, it’s all about the sausage.

South African sausages (boerewors) are legendary throughout Africa and are an important part of many cuisines. Much like our well-loved Cumberland, they should always adhere to some rather strict rules when it comes to making them.

They should contain at least 90% meat, including beef as well as lamb, pork or a mixture of all three. The space left over is then filled with herbs and spices – leaving you with a marvellously meaty, flavoursome sausage that will blow your socks off.

Chakalaka’s local South African butcher makes their boerewors to his own secret recipe and I must say – they’re fantastic. Alongside their classic ‘Chakalaka Sausage‘ there are also regular specials that are available, as well as a veggie one so if you don’t eat meat you’re not missing out.

A big thick, spicy, meaty sausage in a brioche bun with a side of some peri peri fries (some of the best you’ll ever have), is pure, unadulterated comfort food – but done spectacularly well. Again, at only £9 – there’s enough food here to keep you full for absolutely ages.

Alongside my beers Alex was tucking into a super-special can of South African Cream Soda, a bright green soda that basically defies the ability to describe its taste. Much like Irn Bru or Tizer – you just have to taste it to see what it’s like.

Finally, I tried a dish that when read sounds like something Rachel off Friends would make – Bobotie (£10) – a sweet, curried mince with an egg-based topping served with yellow rice.

My first impressions were that it’s like a meaty, sweet cottage pie and as such probably isn’t to everyone’s tastes. I must admit though, as soon as I started tucking in – I found it hard to stop. The mince may be sweet yes, but it’s also spicy and tangy – and it all works fantastically well together – to our grateful surprise.

To finish we shared a Tipsy Tart (£5) a dense date and pecan sponge that is soaked with brandy sauce and served warm with a scoop of ice cream.

The South African version of our beloved Sticky Toffee Pudding, like all the other dishes we’d tried this one came with a serious kick, only this time it was the brandy and not the spices that was doing it. This thing was truly heavenly and the perfect way to end the meal.

Offering up something unique and new, Chakalaka also manages to create something exciting – exposing you to a whole host of new flavours and a rather exotic cuisine, but in a familiar way.

Some of the dishes may sound a little ‘out there’ but they all work – and they all managed to thoroughly impress. Another visit is certainly on the cards. And soon. 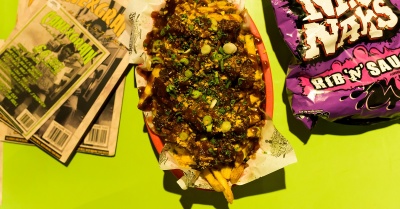 These new Rib LOADED fries are every school kid’s dream! 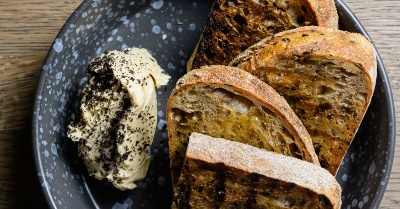 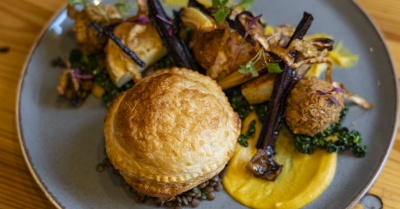 Roast of the Week: Alvarium