Crazy Pedros Best Half and Half Combos

We love Pedros for their casual slices, their kooky specials and their fantastic array of alcoholic beverages.

And I’ve just found one more reason to love them, and that is their ability to do half and half pizzas for those days you can’t choose between a classic Pepperoni and a Kimbo Slice.

It won’t cost you any extra to go twos on a pizza either,  so you really do not have any excuse to match up some of their world-famous toppings and come up with a combo which perfectly matches your tastes.

Just in case you aren’t feeling creative, however, I have taken the liberty of pairing up some toppings for you which I think would taste cracking together. 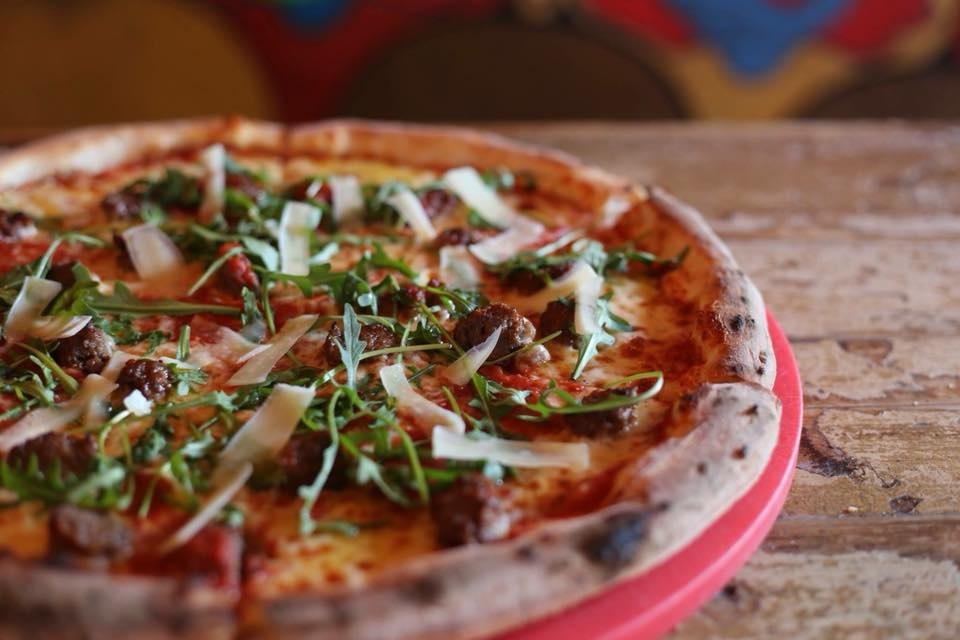 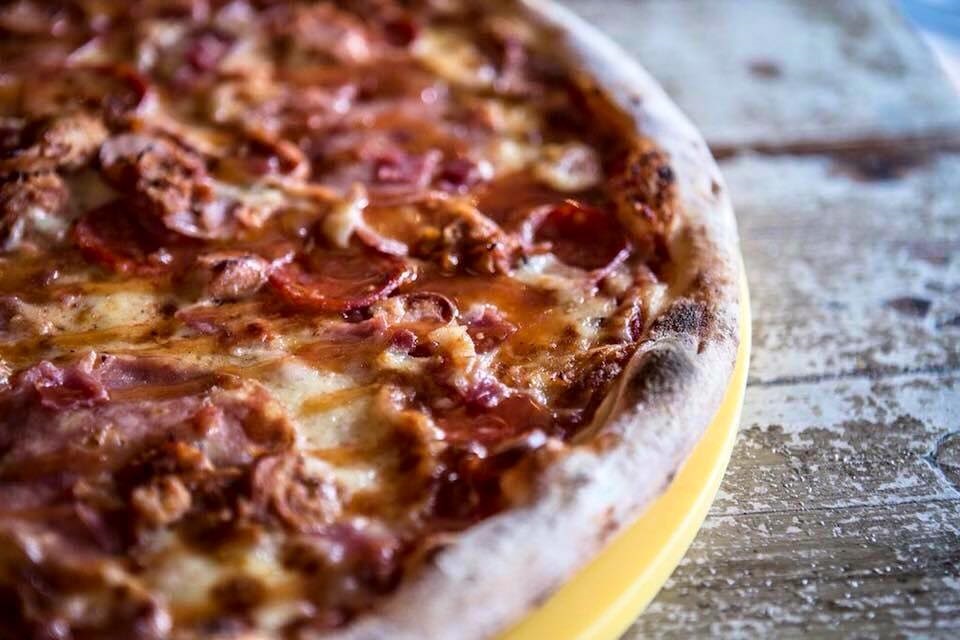 I reckon even a person with the simplest tastes could match these two guys up. The classic Pepperoni is a safe bet, but it is one of those things that gets a little sickly after a little while. Therefore, combining it with The Godfather Part 1 which is stacked with spicy meatballs on a tangy tomato ragu with parmesan shavings and drizzled with garlic oil- is a match made in heaven. Familiar flavours with a hint of finesse and an overriding taste of the old country- just how Nona would make it if she were a 300lb Mexican Wrestler called Pedro. 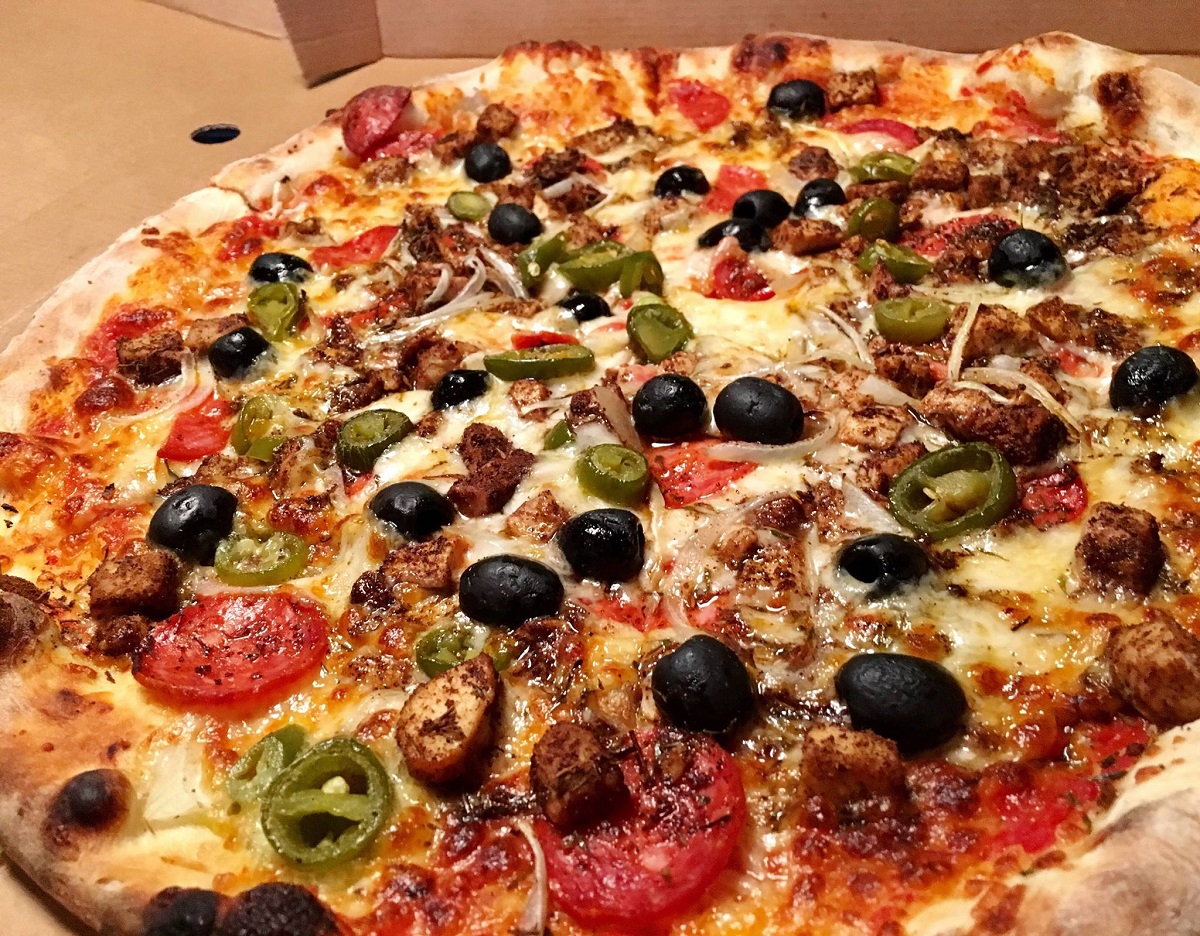 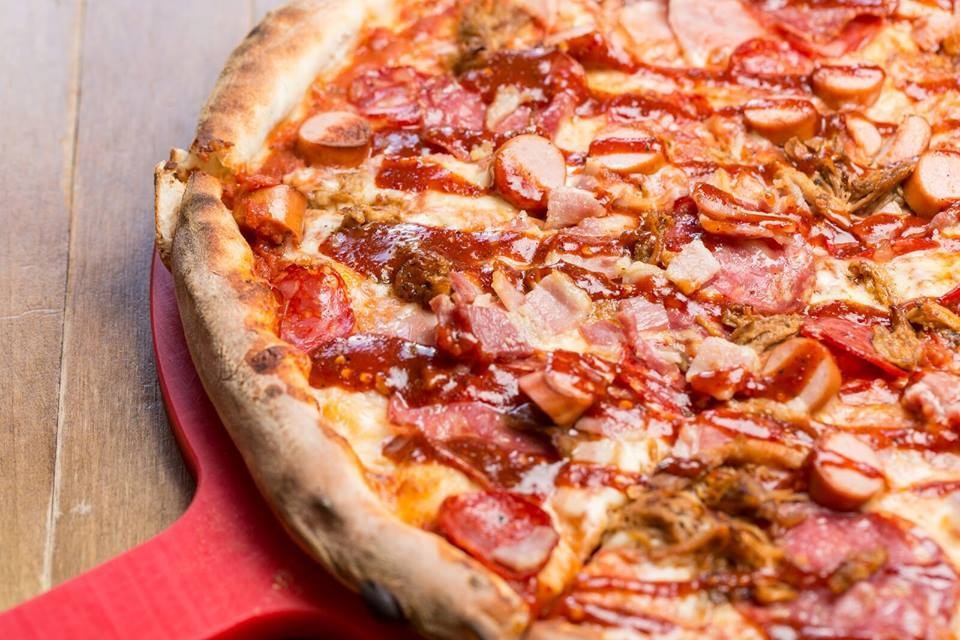 I’ve done this one just to keep things simple for those of you who just want meat, meat and more meat. Right so, do you want pepperoni? Do you want Jerk Chicken? Do you want pulled pork? Do you want ham? Do you want beer soaked frank? Do you want smoked bacon? If the answer to any of these questions is yes, then you are going to want to spice a Kimbo Slice with the Wacko-Jacko for a total meat overload. 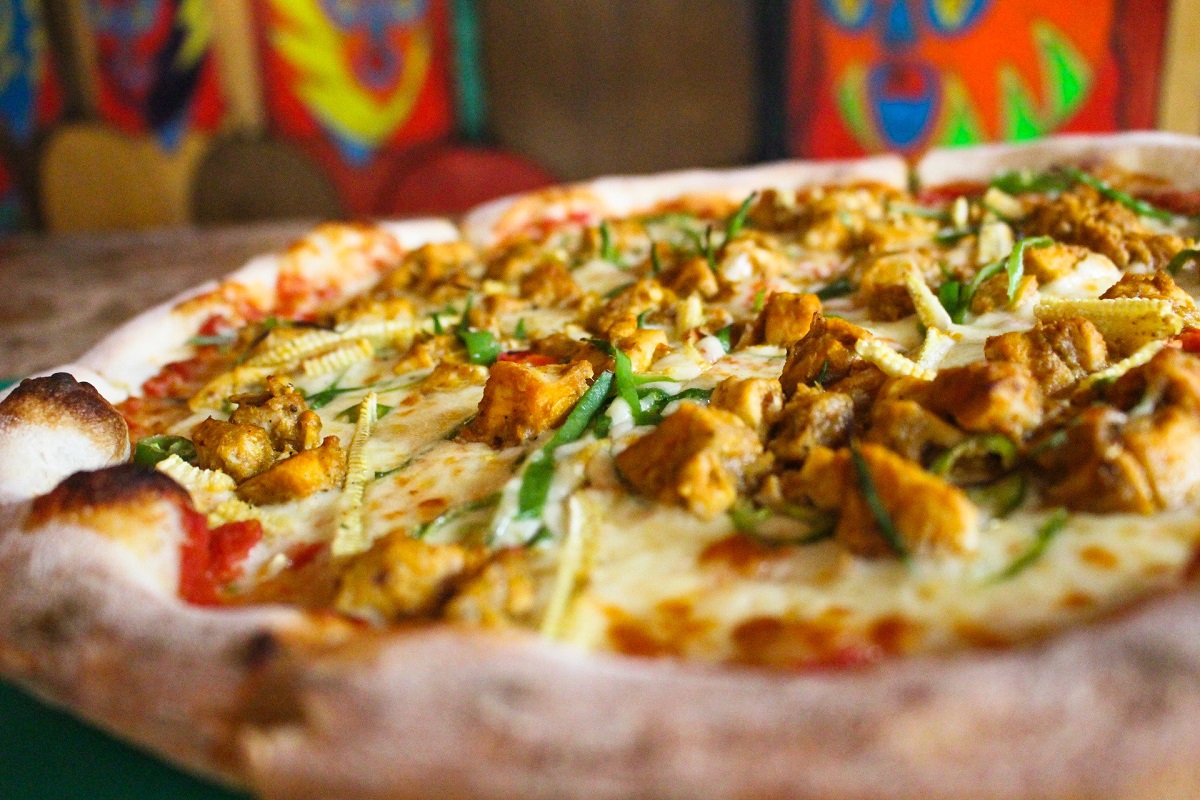 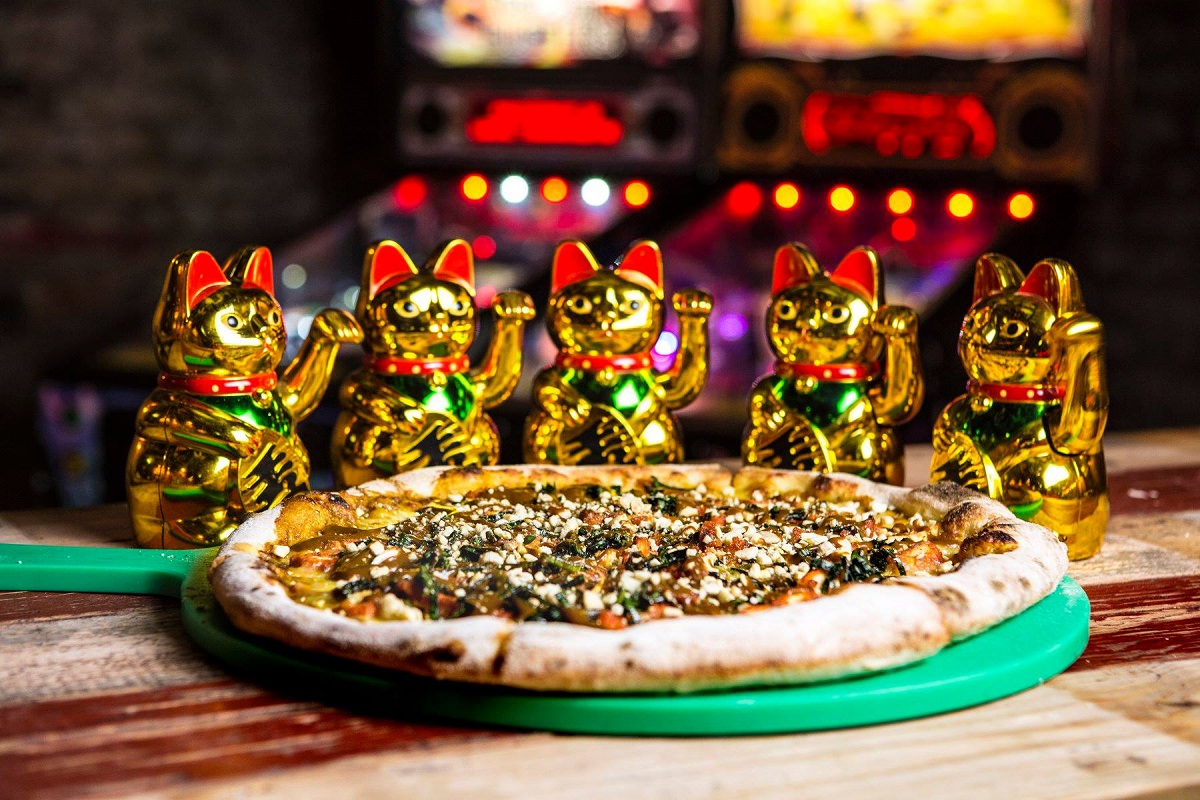 It’s got to be said that Asian flavours are pretty hard to pair with anything other than…err… Asian flavours. So, with that in mind, I reckon a match made in heaven would be the Thai Quorn Dough (Quorn chicken, chillies, green curry, baby corn, mange tout, coconut) and the Lucky Lucky Kat (katsu curry sauce, panko chicken, chillies, soy leeks and cashews). It is a big day in the Finest Office when the Lucky Lucky Kat is on slice, but when I tried these two together, there was really no going back to a puny little slice. This combo is a game chamber. 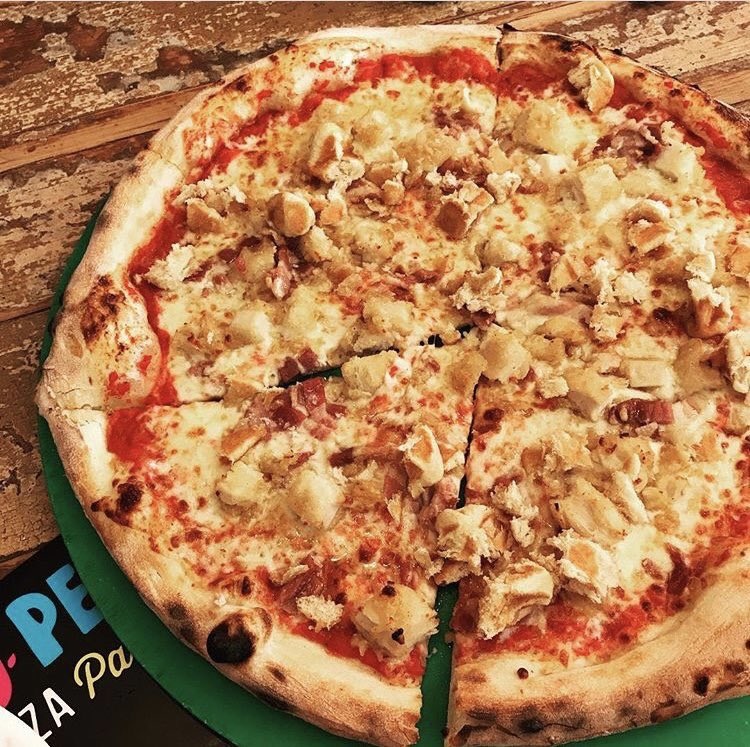 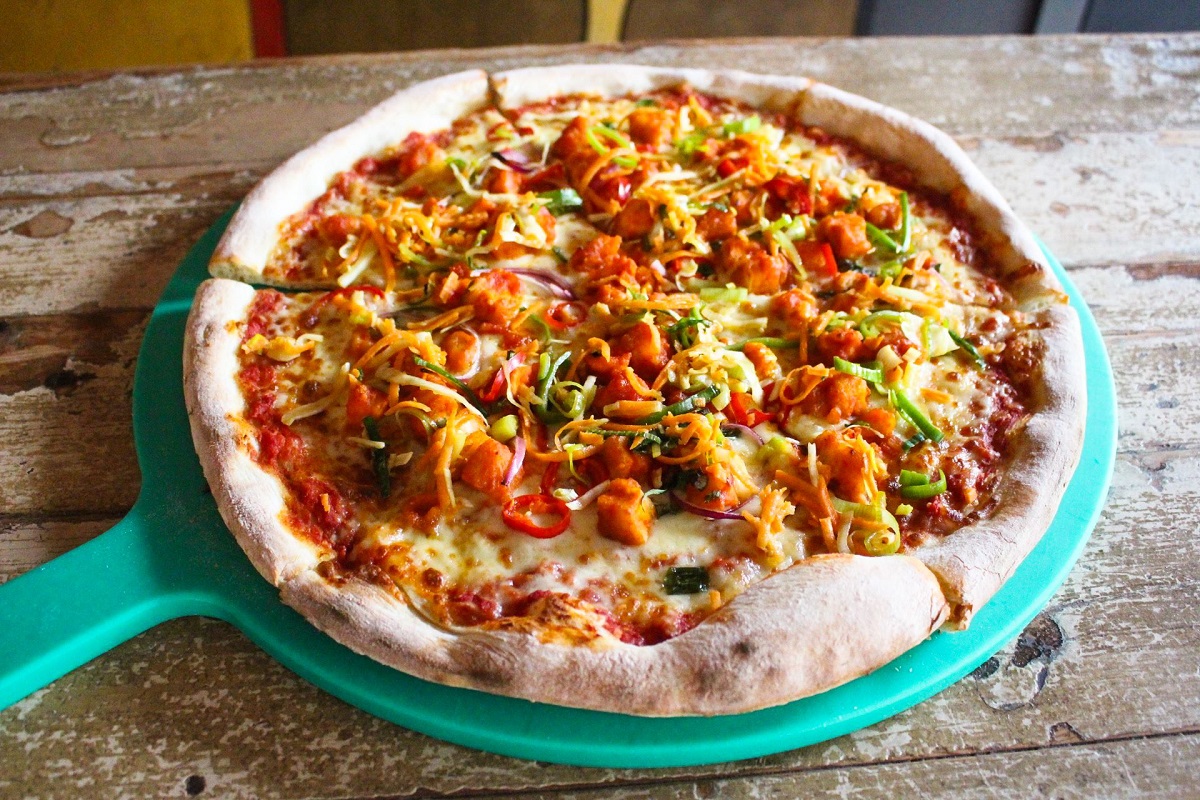 I love chicken, so doubling up is never going to be an issue for me. One of my Pedro’s favourites is the K.F.C for its serious Korean vibes. It takes Siracha fried chicken and pairs it with kimchi slaw, red onion and chillies aloft a cheesy Pedro’s base. It is salty and spicy and therefore is complimented by the unadulterated sweetness of the Fried Chicken and Waffle (whose toppings are pretty self-explanatory.) Chicken creates a running theme, but the opposing sweet, sour and spiced toppings will have a party going on in your mouth for days to come. 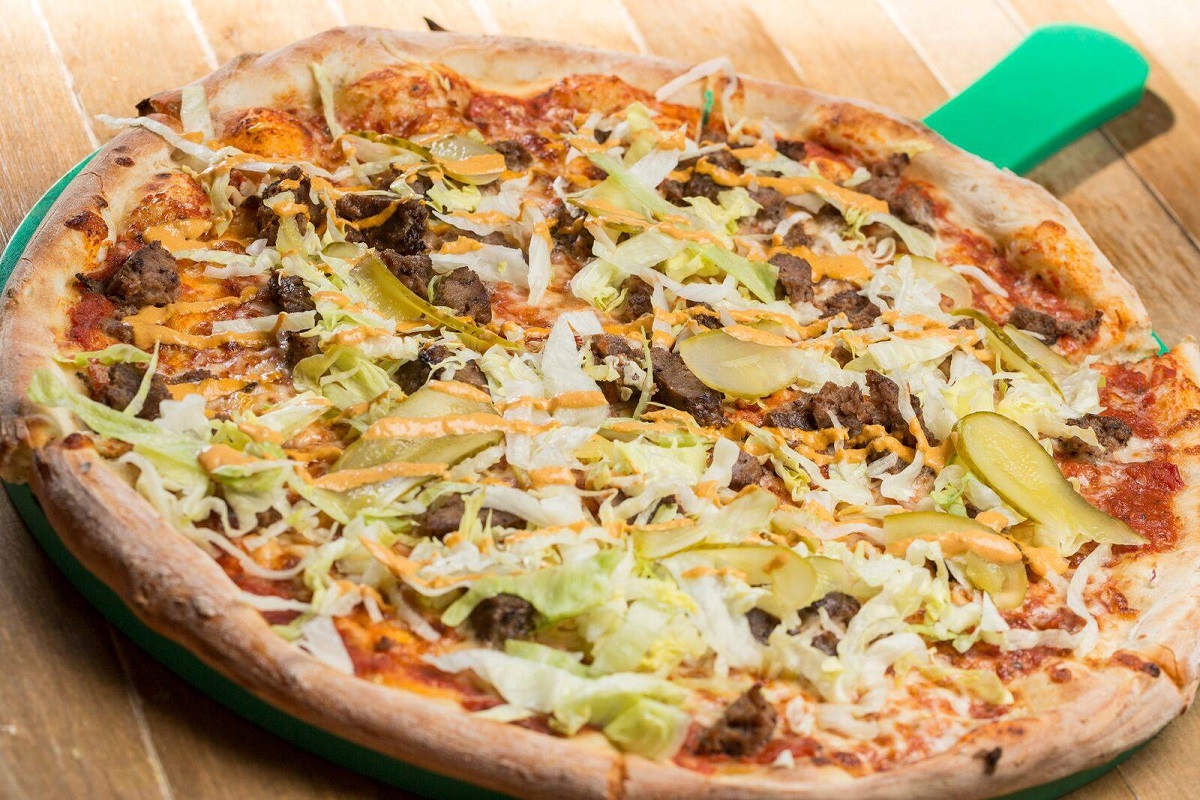 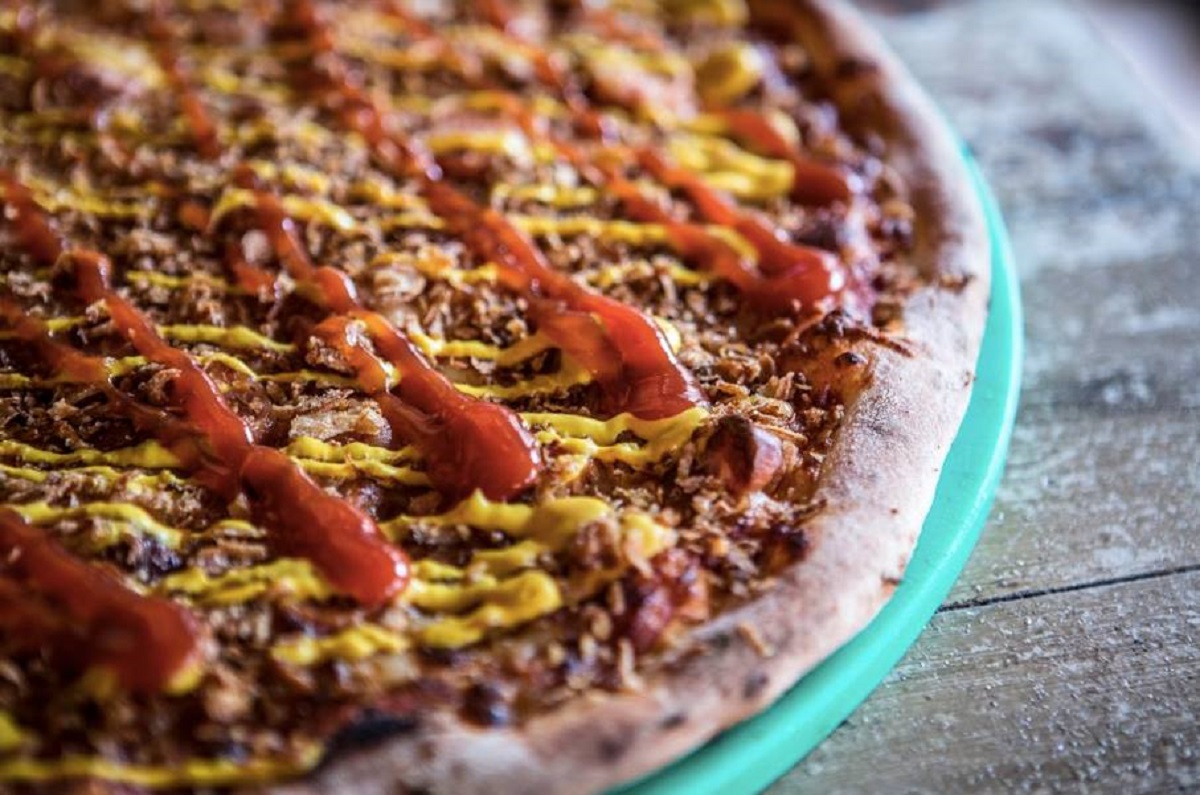 Junk in the Trunk
The Mac Daddy + The Famous Hot Dog

Have you ever been in one of those moods where all you want is junk food? Like a deep fired kebab filled with chips, cheese and gravy kinda junk food? Yeah me too- quite often if I’m honest, and when the craving strikes this particular combo is going to hit the spot. One side is The Mac Daddy, Pedro’s take on a Big Mac with mini burgers, Mac sauce, cheese, shredded iceberg lettuce and pickles. Naturally, this can only be paired with the famous Hot Dog Pizza with beer-soaked frank, crispy onions, cheese, ketchup mustard. This combo has all the calories- but we just don’t give a damn. 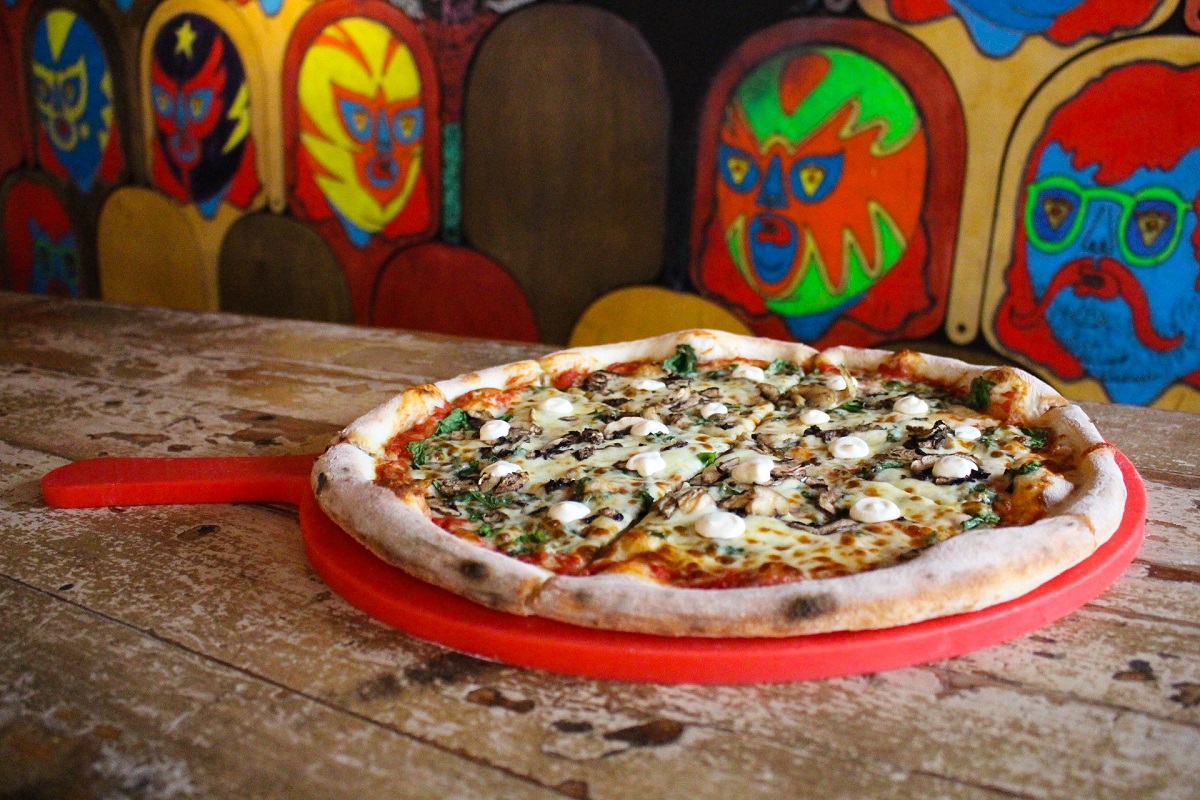 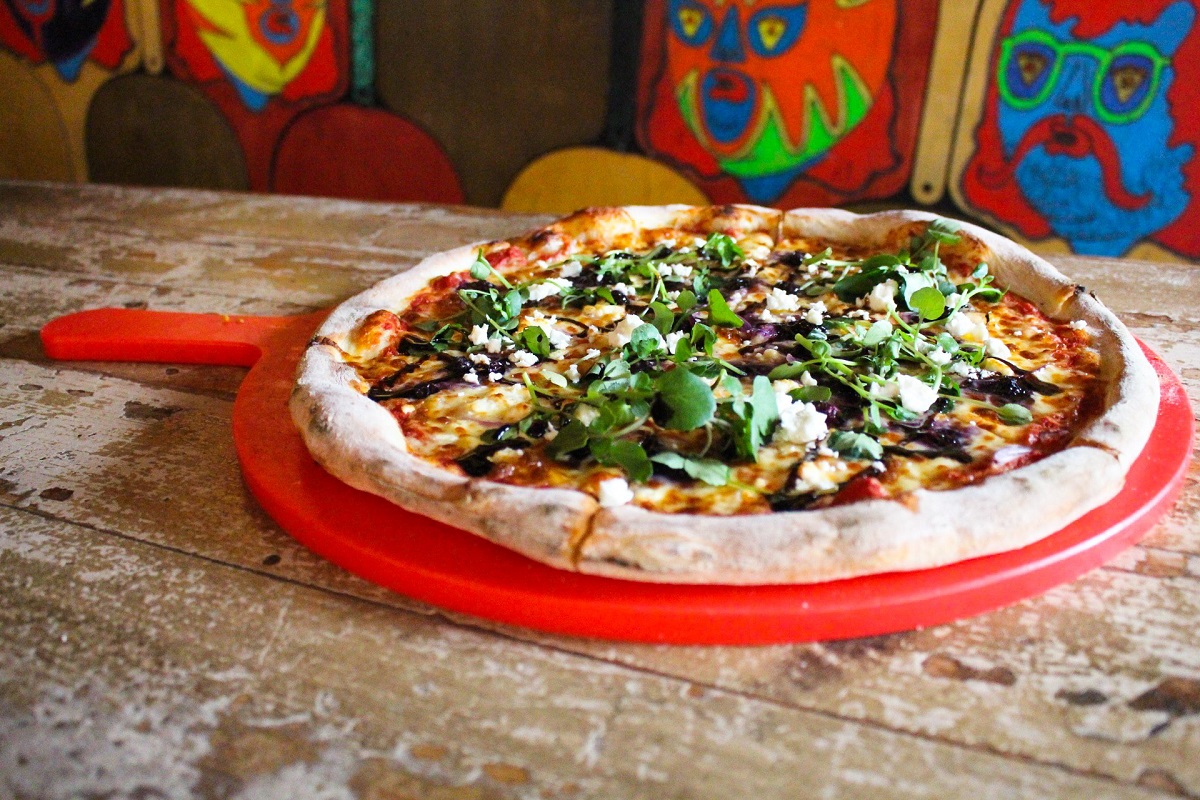 Alright, two disclaimers for you. Number one: This one has to be the worst name on this list, and I apologise for that first and foremost. If you can think of something better, please let me know because I have let everyone down with this one.

Number two: I don’t want anyone to think I have squished these two together because they are just two of four of the veggie choices on the menu and I am trying to appease the vegetarian community. I fully believe this would be a good combo. Summer B is mushroom based with added spinach, garlic ricotta and truffle oil, while the Blueberry Hill is lovely and sweet with blueberry, watercress, balsamic and salty feta cheese to cut through all that tang. I think these two bring out some beautiful earthy tones in each other, and the inclusions of two very different kinds of cheese, one salty and one mild and creamy, is a lovely contrast. 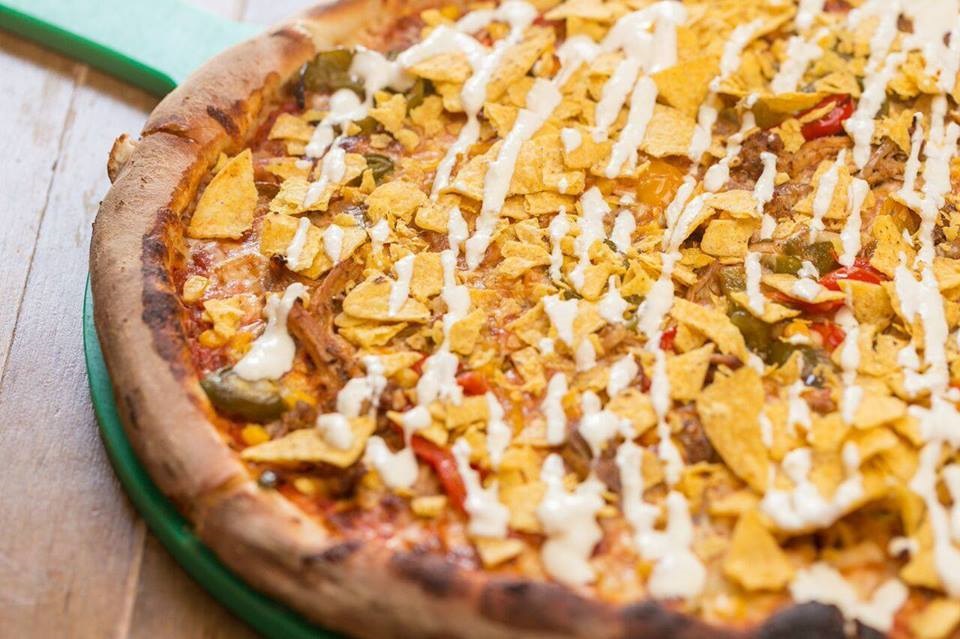 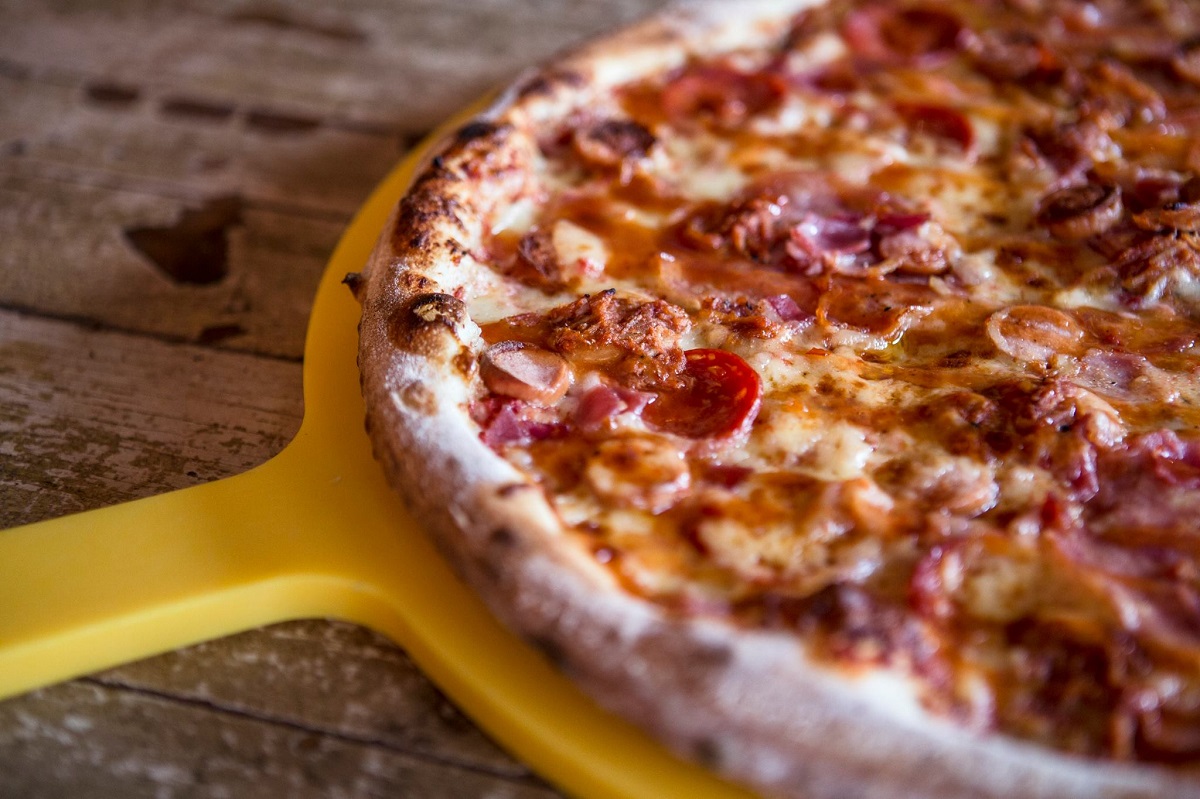 I understand that the inclusion of pineapple on a pizza is almost as controversial as the medical use of marijuana, but I’m just going to put it out there and say that I’m into it. As long as it isn’t too much, a little bit of fruit brings a little pop of sweetness which is very welcome in my mouth. I think the sweetness of the Hawaii 5.0 goes well with the Gringo which is meaty and delicious. Both pizzas have pulled pork which marries the two together, with the latter being tarted up with peppers, jalapenos, tortilla chips, sour cream and Mezcal infused salsa. To me, this combo tastes like eating tacos on a beach in Miami or something, which I can deffo get on board with.