Poko Poko’s ramen might be the most innovative ramen we’ve tried in a long time. The Essex-based team masters the subtle beauty of ramen. 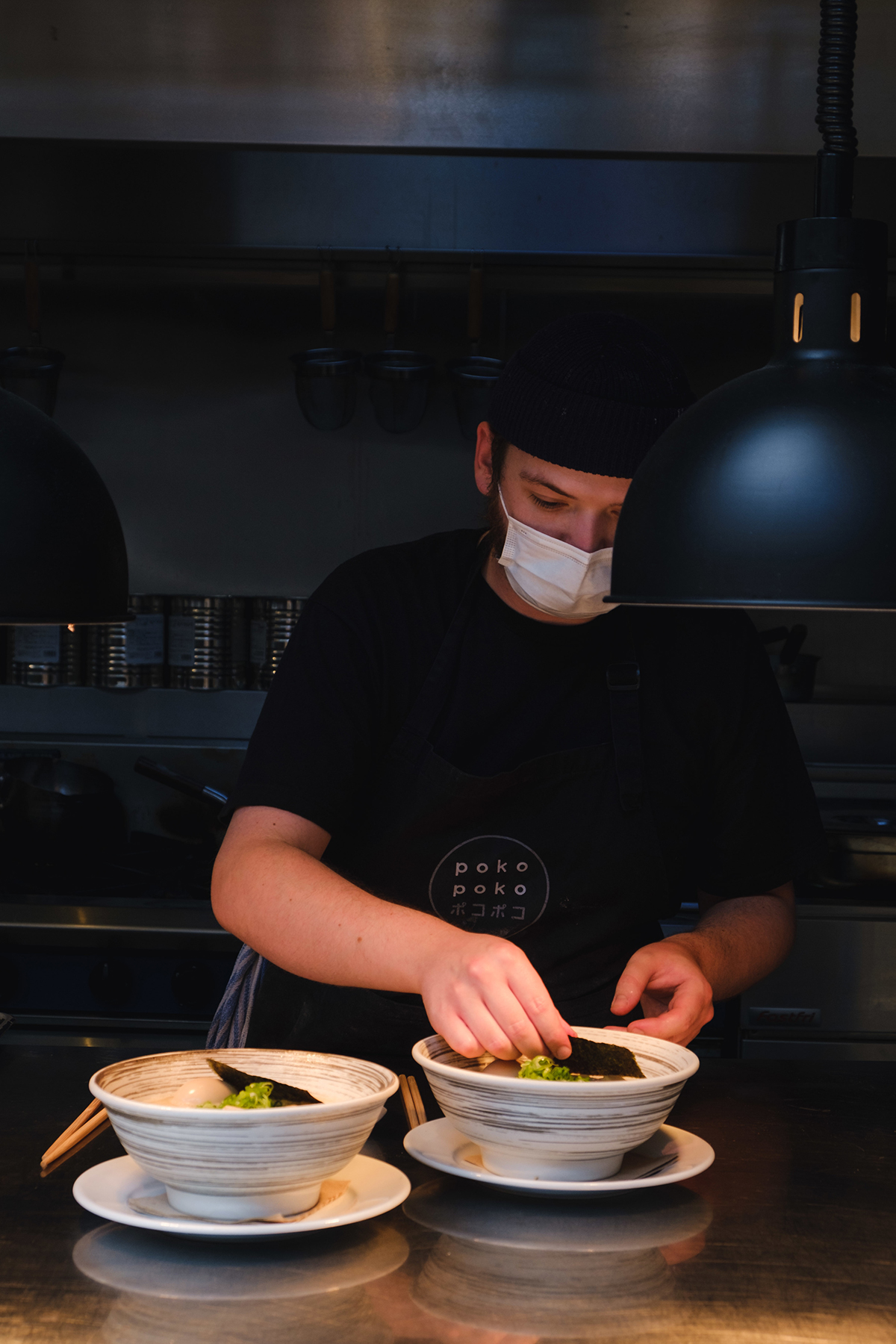 A couple weeks ago we started a ramen series discussing the first of New Wave Ramen’s takeovers. It featured Matsudai Ramen, who occupied NWR’s spot in Mackie Mayor for two days.

This is the second of our series. We headed back to the ramen bar on another sweltering July afternoon to scope out the efforts of Poko Poko. A small team of chefs headed by Jack Evans travelled from Essex to bring a menu that encapsulated the new wave subheading.

Evans “fell down the ramen rabbit hole” five years ago on his first trip to Japan. After a palette-bombarding shio ramen from Tokyo’s famous Motenashi Kuroki ramen-ya, Evans couldn’t look back. In Melbourne, Australia, he trained under Fujio Tamura, a ramen chef from Sapporo known for championing shio and chicken ramen.

The first spoon I take of Poko Poko’s Tori Paitan Shio Ramen is the best slurp of noodle-broth I can recall. Tori is chicken and paitan is a style of soup. It is white and creamy, like a tonkotsu, but made of chicken. Imagine it as tonkotsu’s cousin: less rich and less fatty, in no way less flavoursome. The depth of flavour is driven by a complex shio tare that is built around dried cockles from a local Essex fishmongers, and the usual shio suspects of kombu, katsuoboshi and niboshi.

The tori paitan can be spicy with the addition of ra-yu chilli oil, or you can turn the creamy-intensity up to the tens and have it served awa-kei – foam style – where the ramen is blended and frothed like a cappuccino. The result is a broth that’s aerated with light, delicate bubbles. Prosecco gets you pissed faster because the bubbles rapidly fizz their way into your bloodstream; awa-kei whisks effervescent bubbles of umami around your mouth in the same way. It’s a piece of culinary genius, a small tweak to assert Poko Poko’s place as a trend setter, and one that’s rarely seen outside of Japan.

Unlike its porky cousin, tori paitan is lighter and doesn’t leave a weight in your stomach. You can taste a tonkotsu for hours afterwards. The thickness coats your mouth like a high-sugar viscous wine. With tori paitan, there’s none of that (whether this is good or bad is entirely up to personal preference). Drinking tori paitan is like coming home. It’s an instant warmth, an instant smile, an instant food-dance that you make in that tall stool at the ramen bar.

The Shoyu Ramen is made with a dashi of chicken and dried sardines, harmonised with a shoyu tare and served with temomi noodles. They’re a high-hydration noodle, wide and wavey and full of surface area. While they are not traditionally served with shoyu ramen, they make a lot of sense in a bowl that’s topped with fresh white onion and pork back fat. As the fat cools it thickens, begging the noodles to mop it up into a tangled amalgamation of pork, broth and onion. The noodles – bouncy rather than chewy – work well with the crunch of onion. 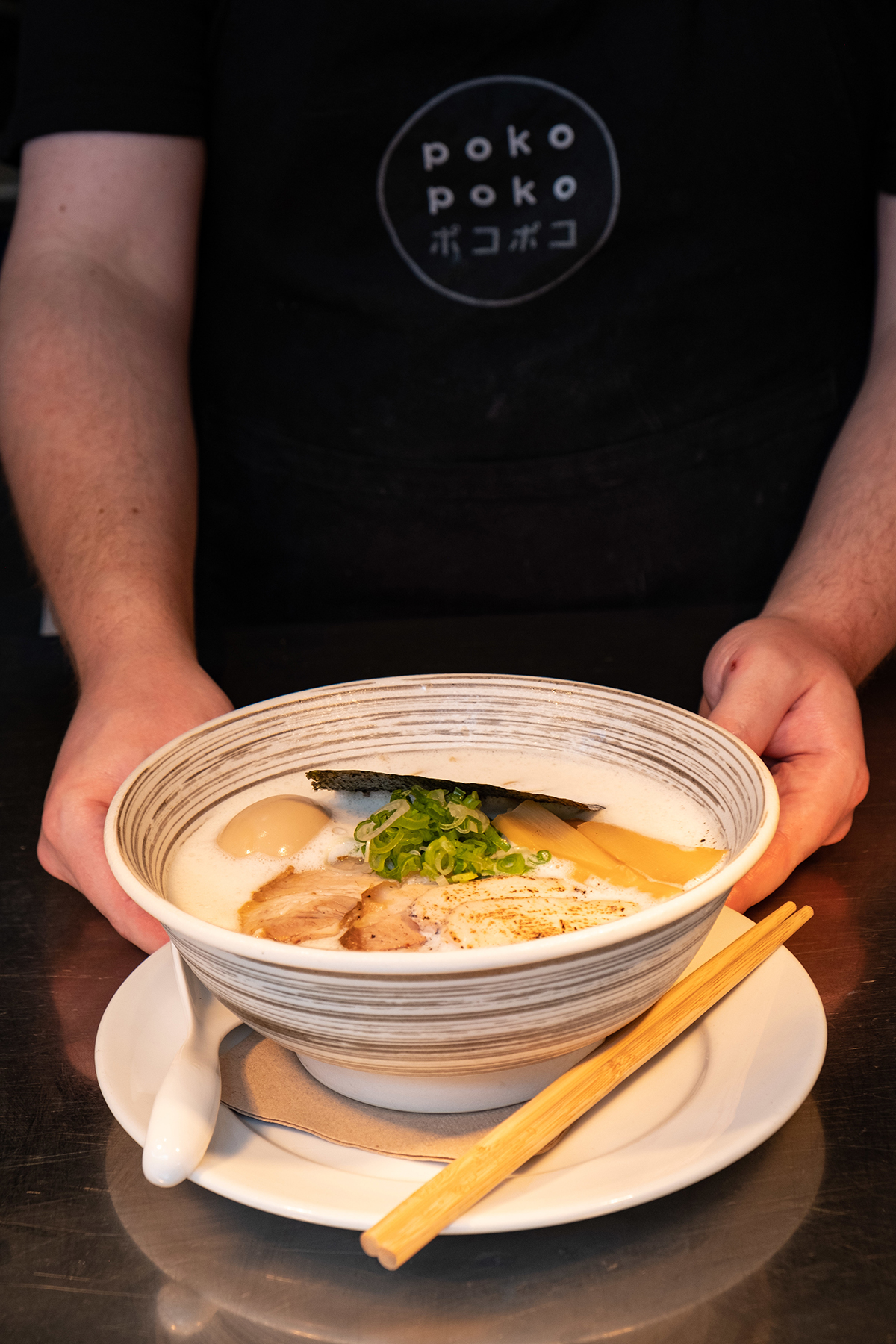 The ramen is served with whole ajitama (rather than the usual open halves). The egg is a smooth, soy-infused, brown, floating fudge with a golden inner. Menma brings a good fermented crunch, lending a touch of acidity which cuts through the richness, like pickles with cheese.

Both bowls are topped with tender and fatty pork chasu and chicken chasu. The chicken is cooked sous vide with the simple compliments of black and white pepper. Broth clings to the chicken chasu and stops it from drying out.

Refreshingly, there’s no side of karaage. Don’t get me wrong, I love karaage, but I imagine that Poko Poko has left it off the menu to fight the homogenisation of Japanese food. Chasu on rice, pickled mustard greens, simple meshi rice to mop up the remains of soup, baby cucumbers dipped into thick and crunchy moromo miso. There are so many dimensions to Japanese food that aren’t explored in the UK. Operating out of a pop-up means that the menu has to be simplified. It is nice to see light cast on variety.

After training at Melbourne’s Misoya under chef Tamura, Evans is on a quest to explore ramen. His efforts are extensively documented on Poko Poko’s Instagram, which also doubles up as a ramen-aesthetic-wet-dream. Bowls of perfectly plated ramen are uniformly distributed through the squares like soldiers standing to attention. With the same shape and the same silhouette, you start to notice the varying subtleties: naruto centres; carefully propped radish discs; fresh mustard greens extending like Christmas trees; deep fried lotus root; broths in varying degrees of opacity; stacked chasu ends. I’m glued to all of Evans’ experiments.

Poko Poko is currently only operating out of pop-ups. If you want to savour the ramen, you’ll have to catch them at one of their residencies where they grace the kitchens of fellow chefs and friends for a fleeting moment. Believe me when I say that the ramen is worth travelling for.

The next New Wave Ramen takeover is from Bristol’s Tomo No Ramen, which you can book here.

There’s a Drag Queen Bingo Extravaganza in the NQ this Weekend!