Run by ex-NOMA chef Simon Martin, Mana in Ancoats has been dubbed one of the most ambitious restaurants to land in Manchester in recent years, but does it live up to its reputation? 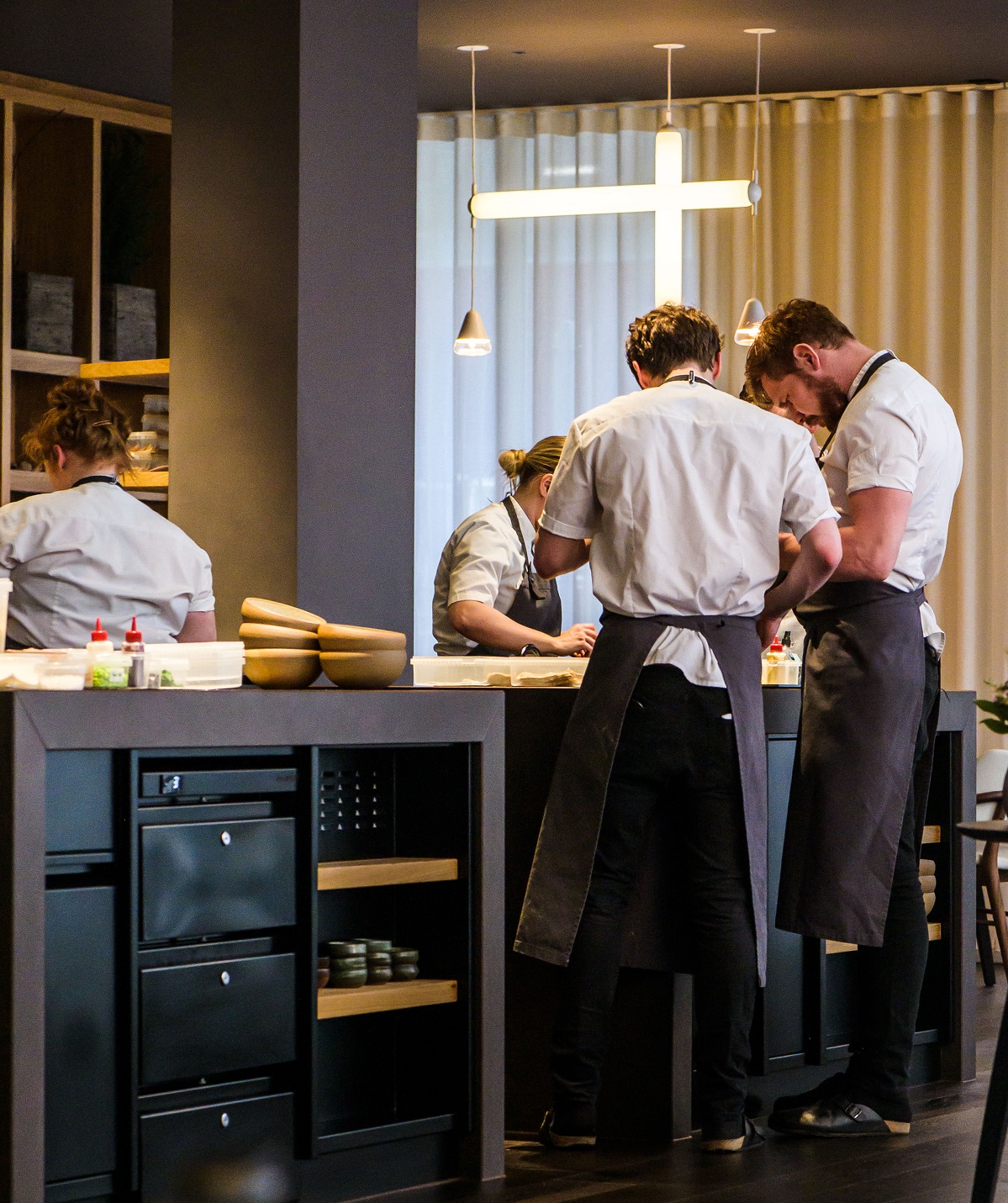 With a fine-dining ethos, a gargantuan 19-course menu and an aim to rediscover everything that’s been forgotten about Britain’s indigenous produce, Mana is certainly a new and exciting concept for the restaurant scene in Manchester.

With a huge open kitchen buzzing with about 12 chefs, a bar to the left and a crescent of tables in front, Mana feels as if you are inside the home of a trendy Scandi designer who prefers his dinner party guests to sit in small groups to promote intelligent discussion. 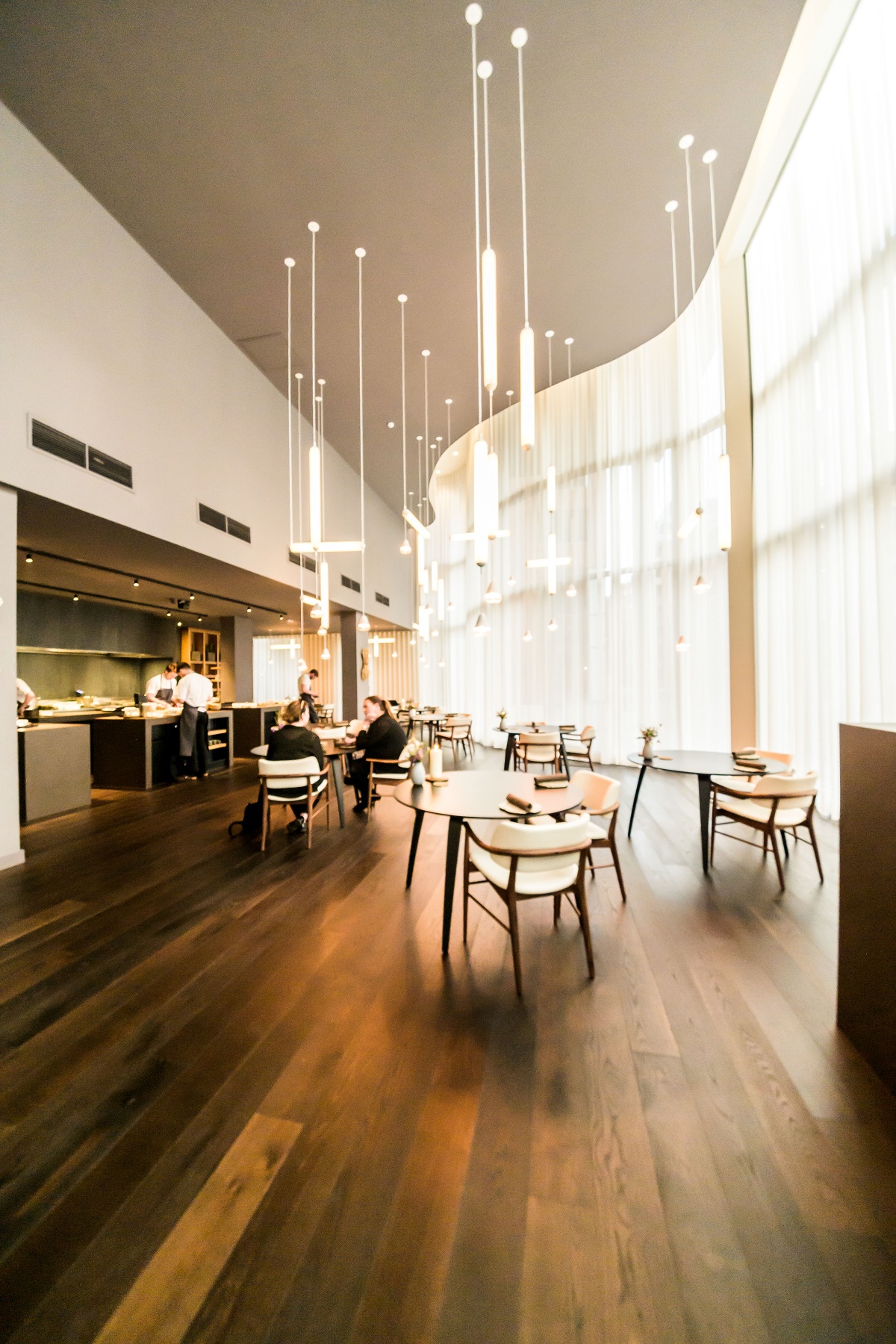 It is certainly relaxed and leisurely which is something I really liked, and it was refreshing to eat in a fine-dining setting which was not austere or stuffy. Instead, it was a place which holds a comfortable modern design which feels very much at home in Manchester.

We began the meal with a range of ‘nibbles’ although it almost seems sacrilege to even call them so. 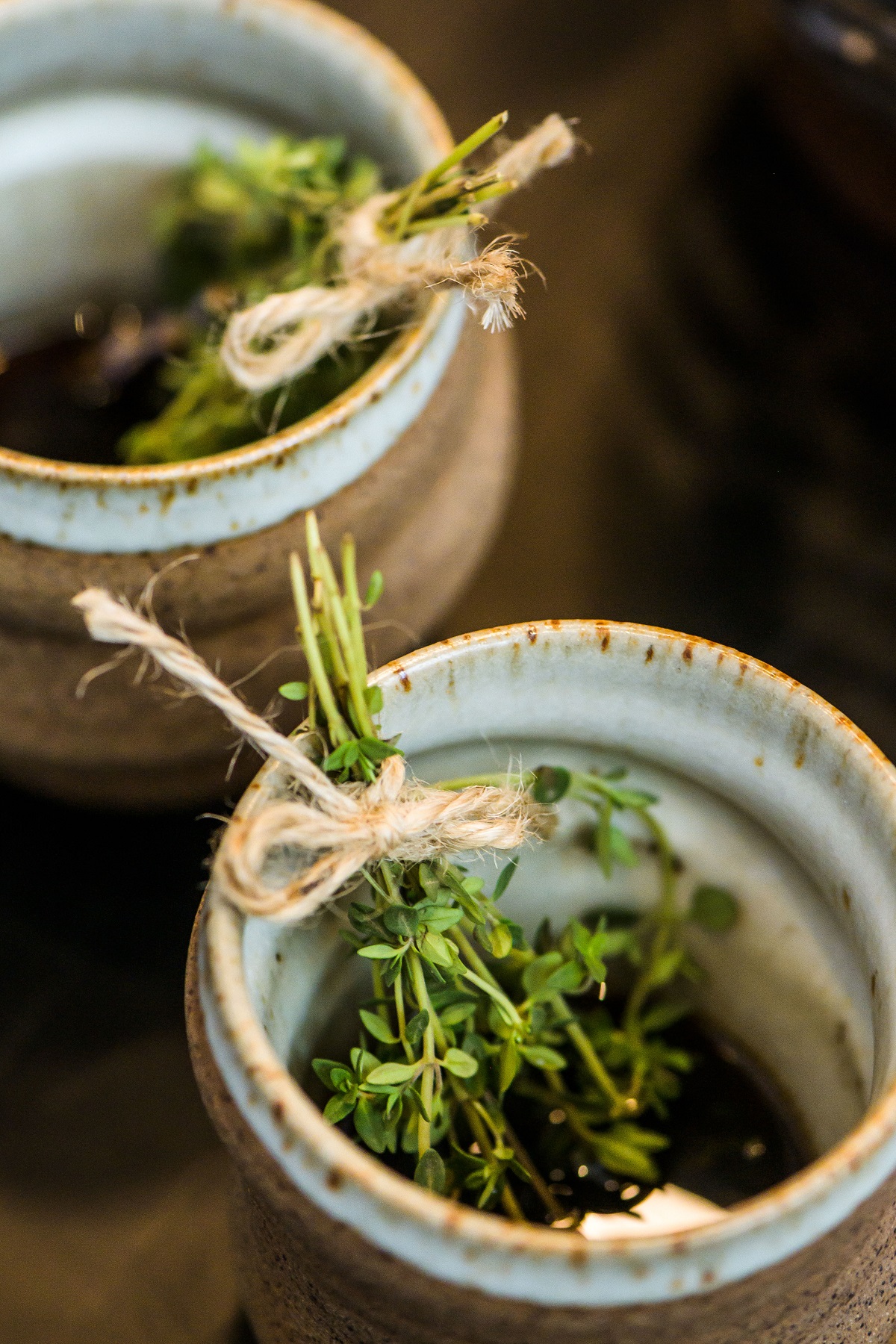 Whilst sipping on a delicious aperitif from their more than bountiful drinks menu, we sampled a heart-warming cup of what I can only describe as mushroom tea. In reality, it was a fungi rich broth with kelp for added umami oomph and a sprig of lavender and lemon thyme which tickled your nose with the delicate aroma on every sip.

Crispy Pork Skin was next which had a texture so light it would float off in the lightest of breezes. I was impressed with the meaty flavour and the complete absence of grease which is so common in pork products. 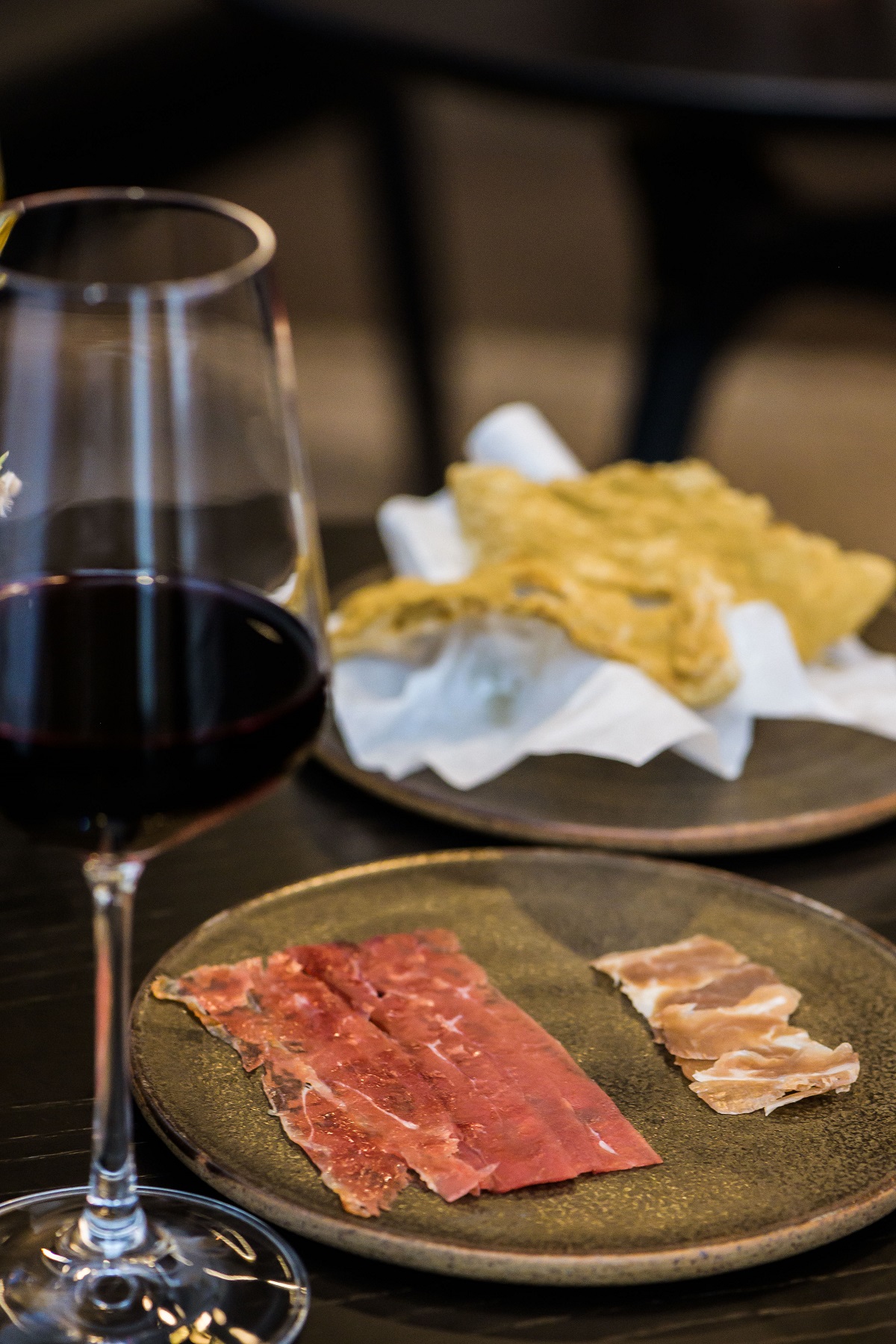 This was paired with a selection of cured meats including Lamb Bresaola and Duck Charcuterie. The latter left a serious impression on me with its delicate, translucent quality and rich, deep flavour of the autumn forest floor.

​With our taste buds sufficiently tantalised, we were moved to our table and settled in for the main series of events.

With a further 15 courses to get through, we opted to avoid the wine flight (for an additional £70 per head) and instead decided on a lovely bottle of Yara Valley Australian Pinot Noir (£40) – a recommendation from Mana’s full-time sommelier which did the job nicely.

First was a selection of ‘snacks’ which, again, seems like a rather modest description of what was to come. 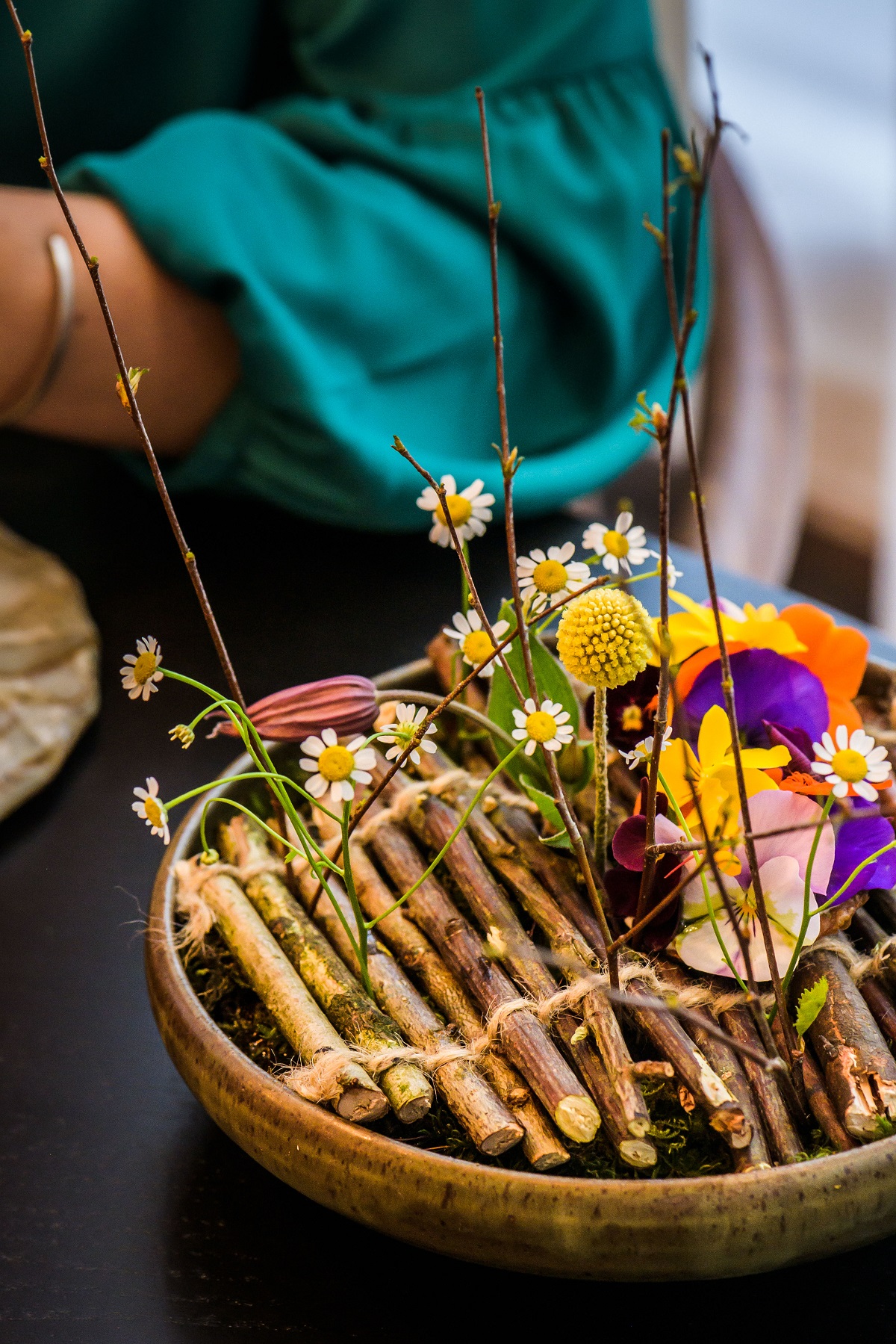 There was an English Tostada with ‘all the flowers of spring’ which was formed of a malt-tasting cracker topped with juniper Crème Fraiche, thyme oil and fresh, bright edible flowers. You would have to be mad not to call it beautiful, and even more insane to call it anything other than delicious.

Granted, it was one of the more conceptual dishes I have had in front of me, but I bought into it. I imagine more ‘old school’ diners might not be impressed with having to search through various flowers and twigs to find the bit you can eat – but I thought it was inspired and indicative of the high-concept dishes that were yet to come. 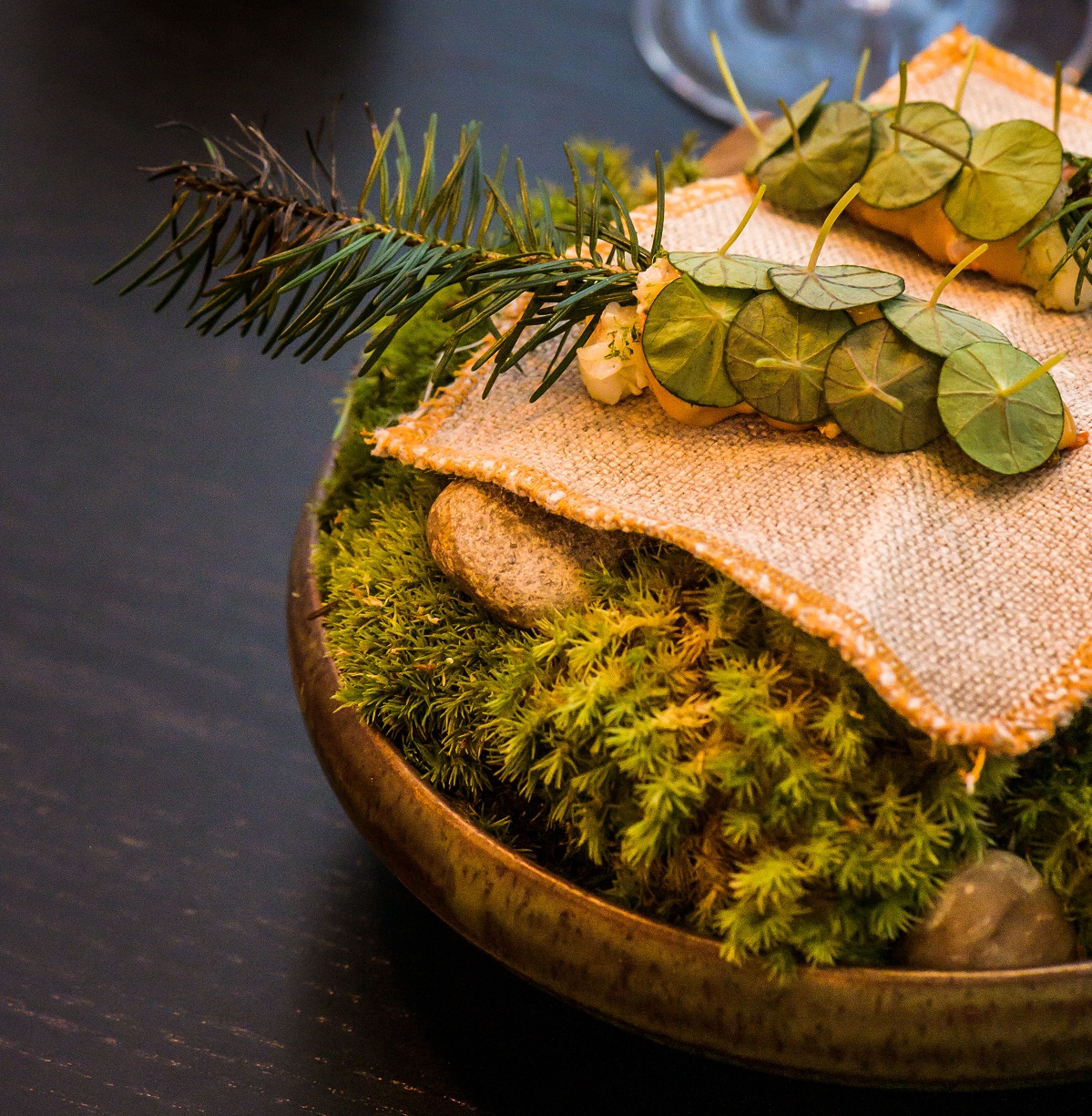 Langoustine Tail came served on a bed of moss, a blanket of nasturtium and a tail of spruce. This was then set alight at the table which gave off a delightful woody aroma which lingered in the air. We were instructed to eat the langoustine directly off the twig which extended the sensual experience even further and made it the ultimate marriage of land and sea.

Another highlight from the range of snacks (yes, we are still on snacks by the way) was the ambiguously named Oyster and Chicken Fat. Here again, Martin shows us his passion and finesse at culinary theatre. 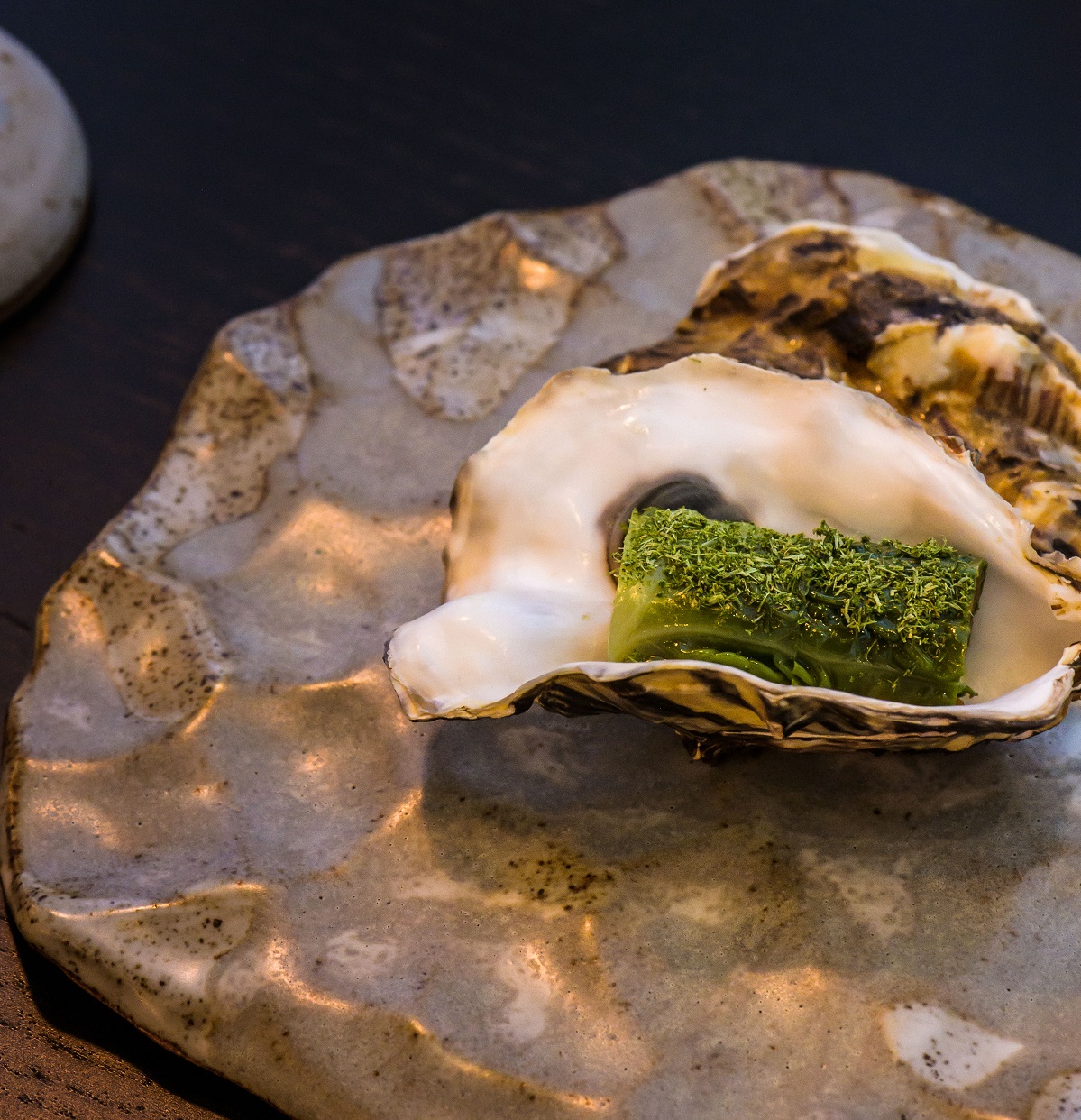 We were presented with two perfectly formed oysters sat aloft a pile of pebbles. But things are not always what they seem at Mana and the oysters are opened up to reveal a neat roll of cabbage filled with British raw oyster and a sprinkling of crispy chicken fat. It tasted of the sea and had the most amazing balance of textures- I couldn’t get enough.

The final ‘snack’ was Yakitori Eel. Now, considering my less-than-positive experience of eel at a restaurant that will not be named a week before, I have got to say I had a bead of sweat on my brow in anticipation of this dish. I think there is nothing worse than a fussy eater, especially in my line of work and even more especially when I panicked and shook my head when asked if I had any aversions or allergies at the beginning of the meal. 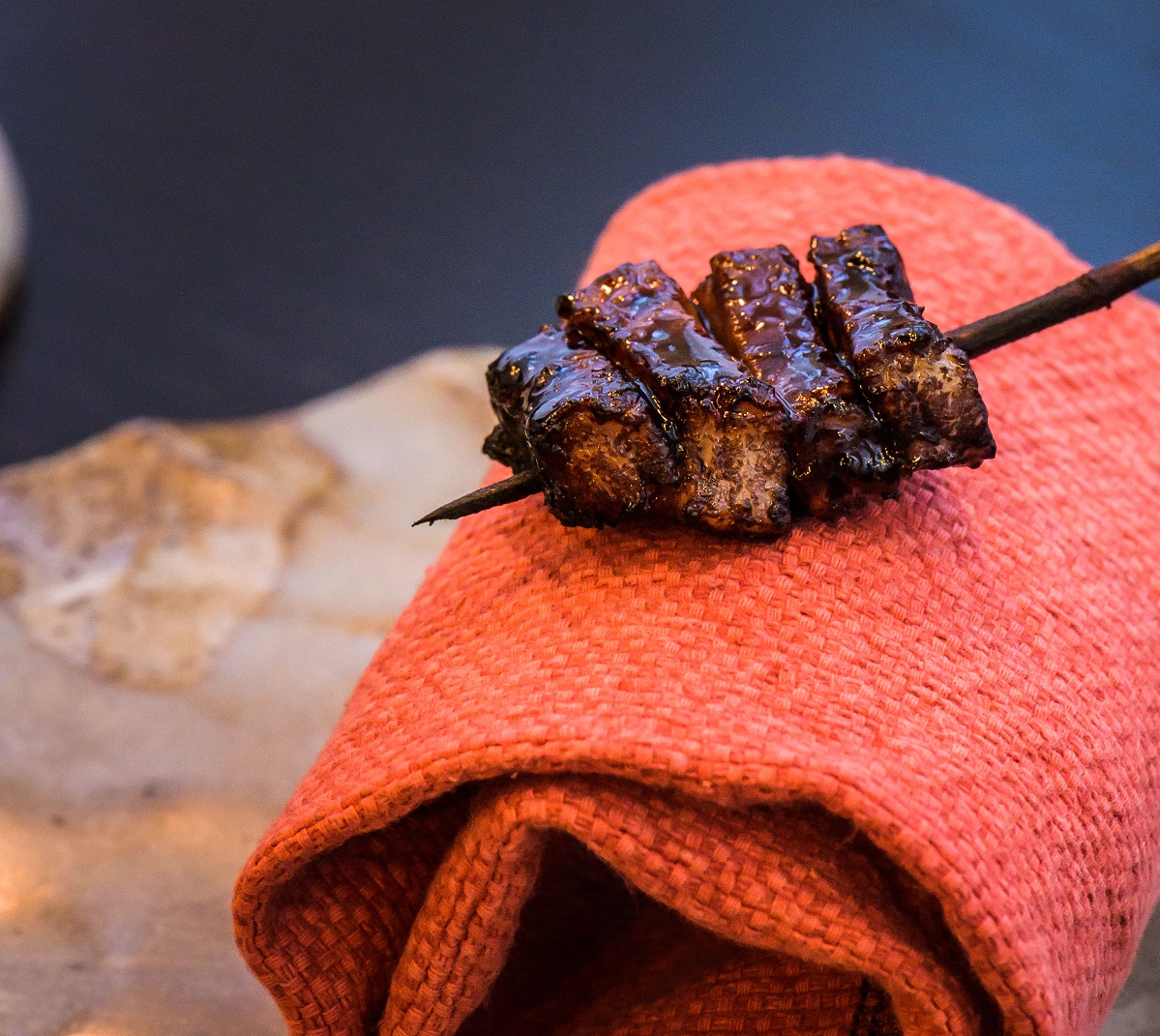 Turns out, it was delicious and like no other experience I have ever had with an eel dead or alive. It was cooked the Japanese izakaya way over hot coals on a wooden skewer in a roasted yeast and blueberry glaze.

Sweet, salty and confidently charred, the fish (I think it is a fish anyway?) took on an enigmatic texture that sat somewhere between flaky fish and crispy-charred beef. As you can imagine, it was excellent. 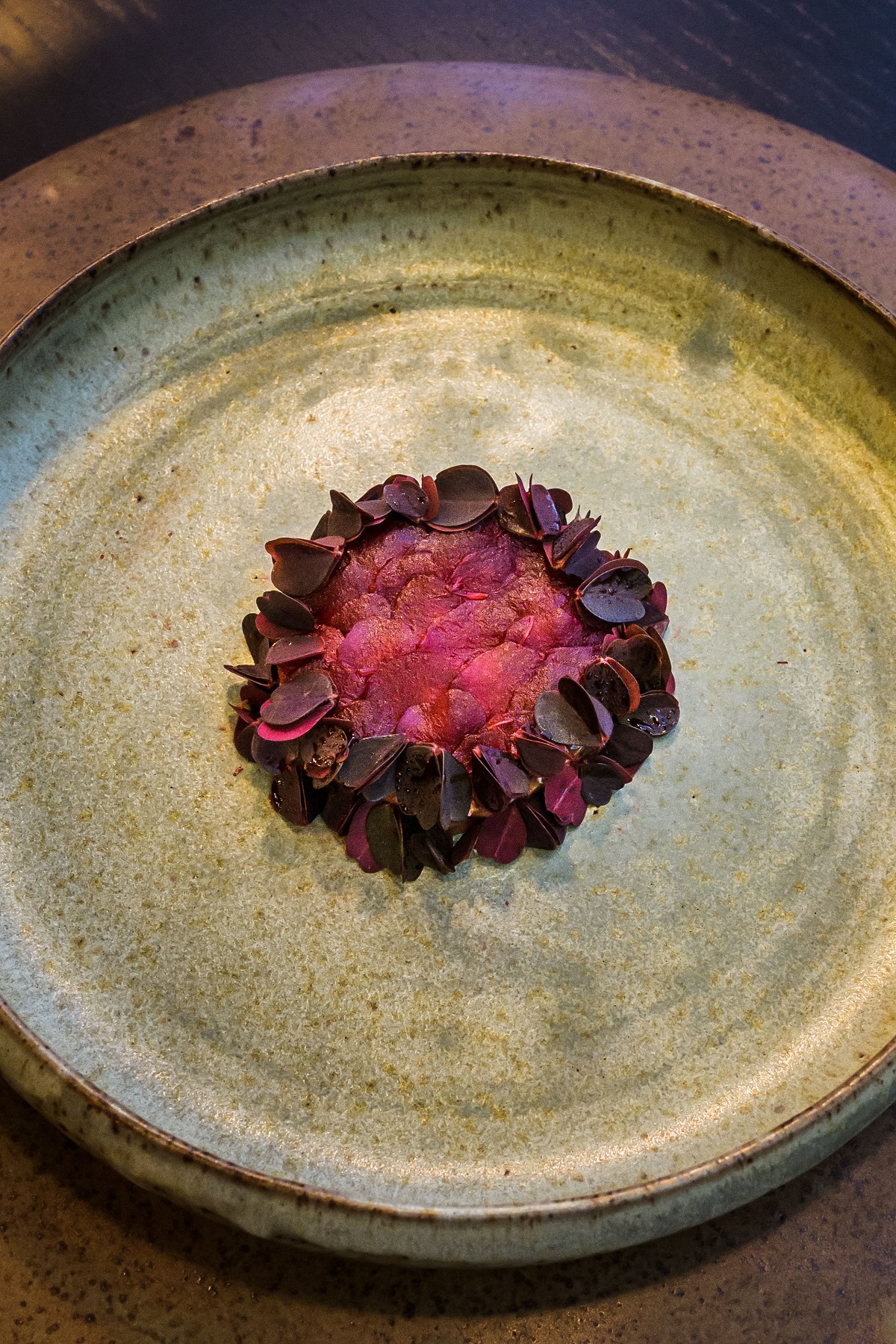 If you can believe it after eight courses, that was the end of the ‘snacks & nibbles’ portion of the evening and we moved swiftly onto what I guess we can call the starters.

First up was a Beef Tartare that we were told ‘tasted like beef’. It did, shockingly enough, and that is because of the inclusion of a super concentrated beef sauce used as a seasoning which is made in the same way as Asian fish sauce and it made sure the dish lived up to its name. 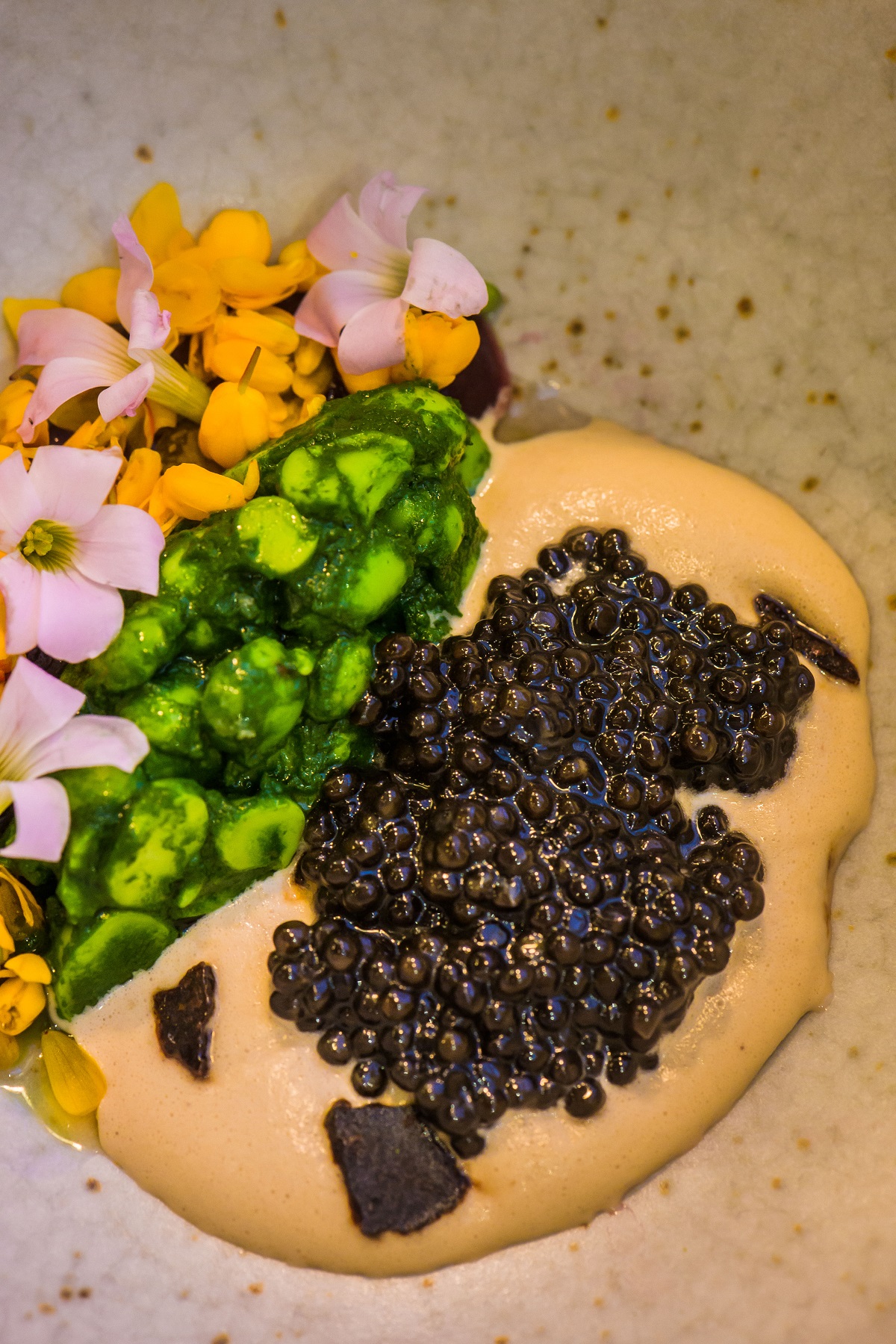 Next followed a pair of dishes which put humble vegetables at the forefront. First the English Peas with Raw Milk, Plum Flowers and Caviar was good, but the simple yet effective Onions with Fermented Barley was better. It had a soupy consistency and a light cheesy flavour which we all know goes impeccably well with onions – especially when they are so dainty and softly cooked such as these.

One of the stand out dishes for me was the Crab with Celeriac and Masa Broth. The texture of the crab was fantastic with hearty strips which put the obvious freshness of the shellfish front and centre. 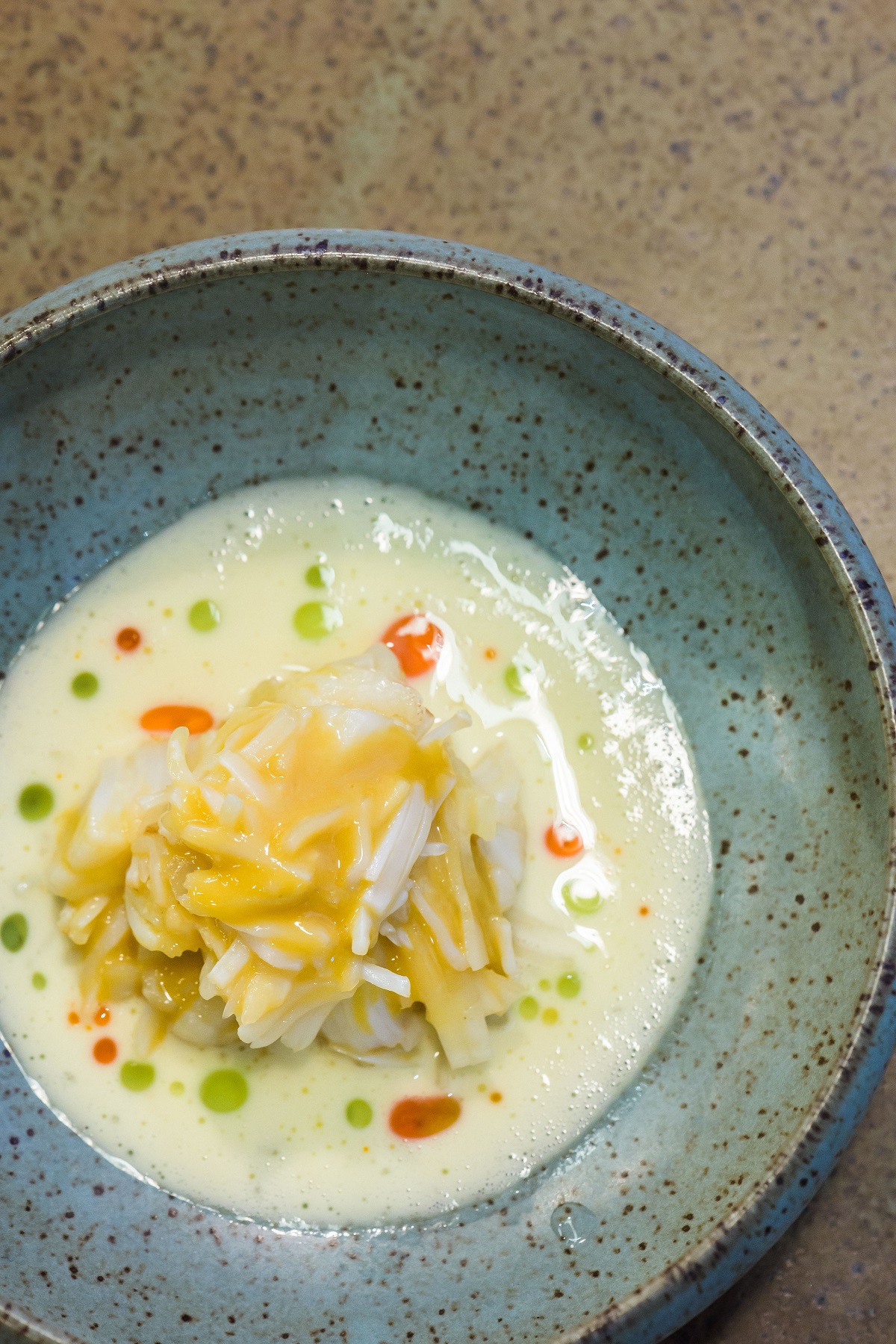 The Masa broth, made from corn, complimented the earthy celeriac notes and was peppered with colourful blobs of lime and chilli which were both confidently hot and acidic in equal measure. My only note was it was a rather soft, light dish and it could have done with a contrasting texture, but all in all, it was still an elegant dish and I enjoyed every mouthful.

​Barbequed Greens were next, which I cannot stop thinking about. When it arrived, it was the kind of thing an aforementioned ‘old-school’ connoisseur might sneer at. In essence, it was a plate of leaves, but it was the most incredible plate of leaves I expect to eat in my entire life. 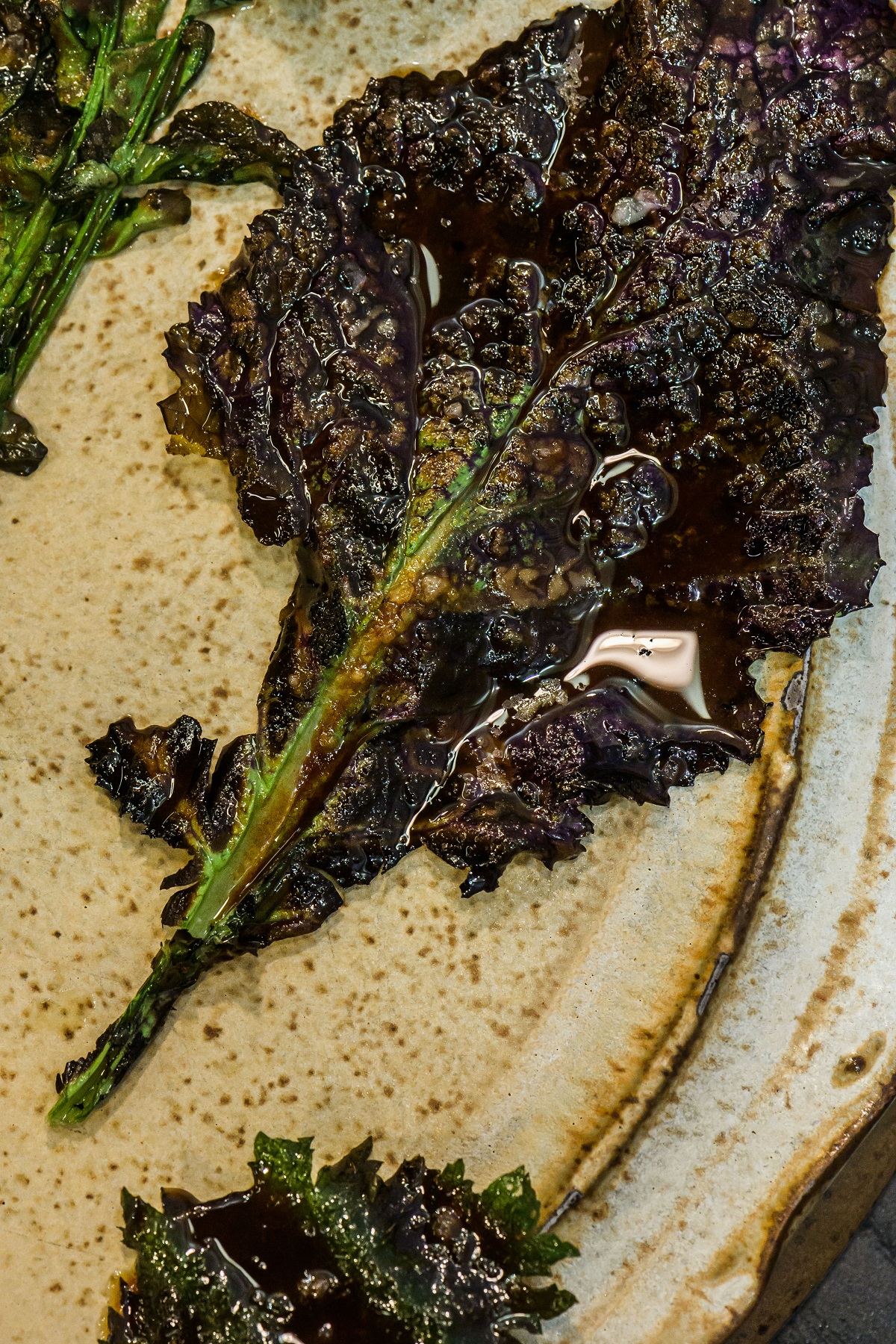 Foraged from Stockport by the Mana team’s fair hands, when it comes to cooking Martin treats them in the same way you would a good steak. That means it was cooked on a grill, brushed with garlic butter and glazed in a sticky sauce made from dehydrated scallops for a deep umami flavour. 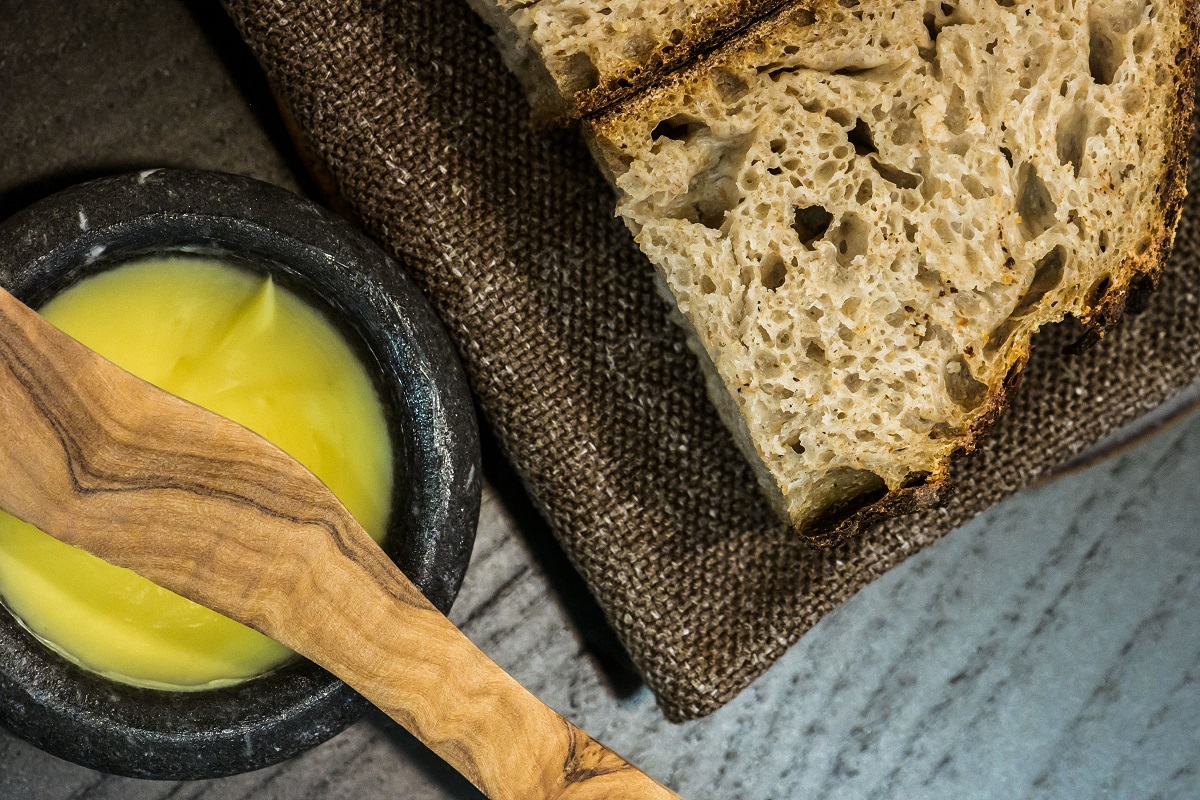 In short, it was an amazing experience with the flavour of beef and a texture that was simultaneously like crispy seaweed and charred beef fat. Paired with some delicious 24-hour Sourdough and Cultured Butter made by a 90-year-old Swedish woman called Gitte​ (not even making that one up) it was probably my favourite part of the meal.

​For me, the plate of leaves and bread and butter made by a Swedish geriatric totally upstaged the final savoury dish of Orkney Hogget, but that is not to say that it wasn’t fabulous. 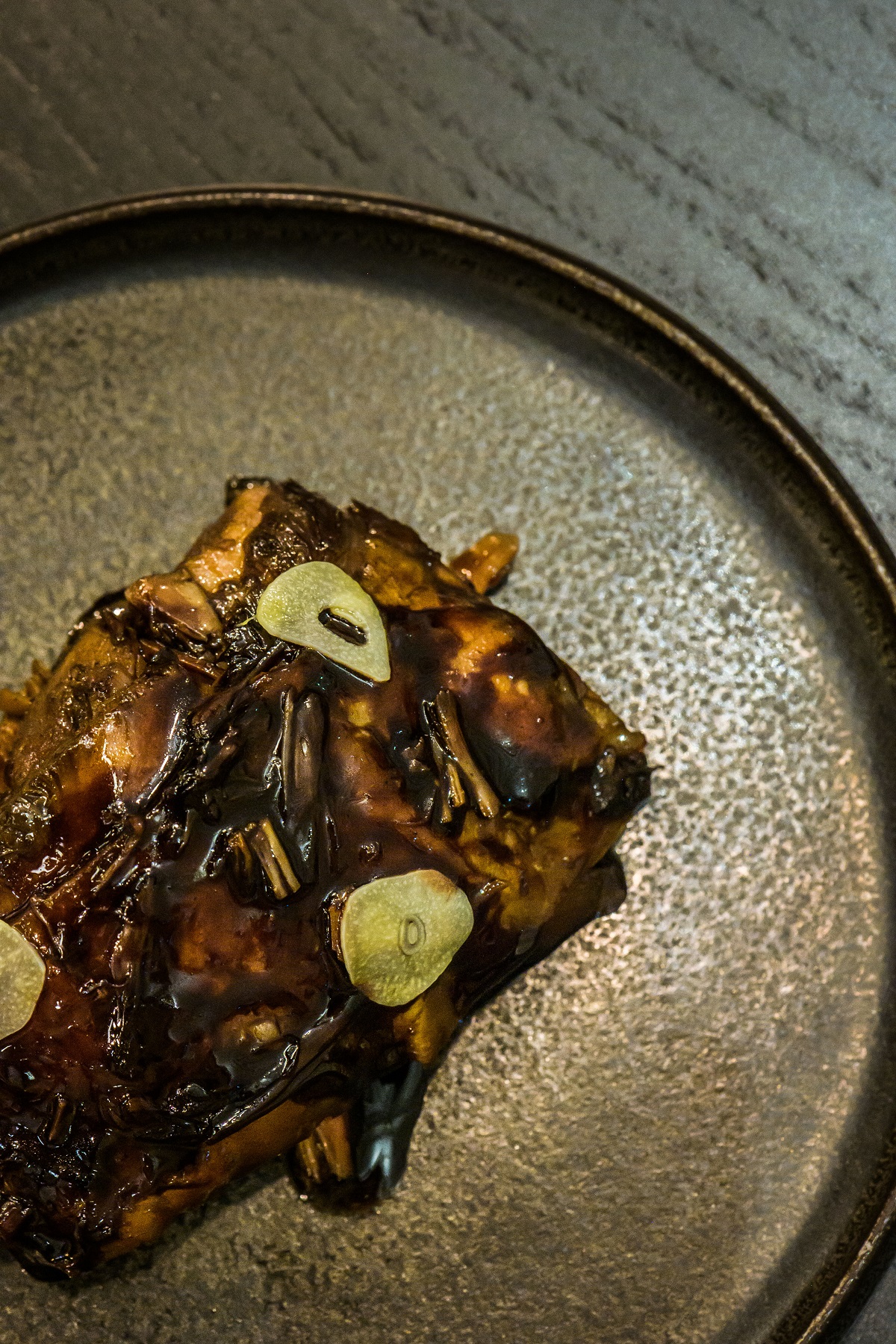 Sticking with the land and sea theme, this meat from the outer Hebridean island of Orkney is fed on seaweed which provides a rich saltiness to the meat which is already much more flavourful due to its age.

It was served in a sticky meat sauce and with a (comparatively) simple green salad on the side. Sometimes, the most straightforward things are the most delicious. 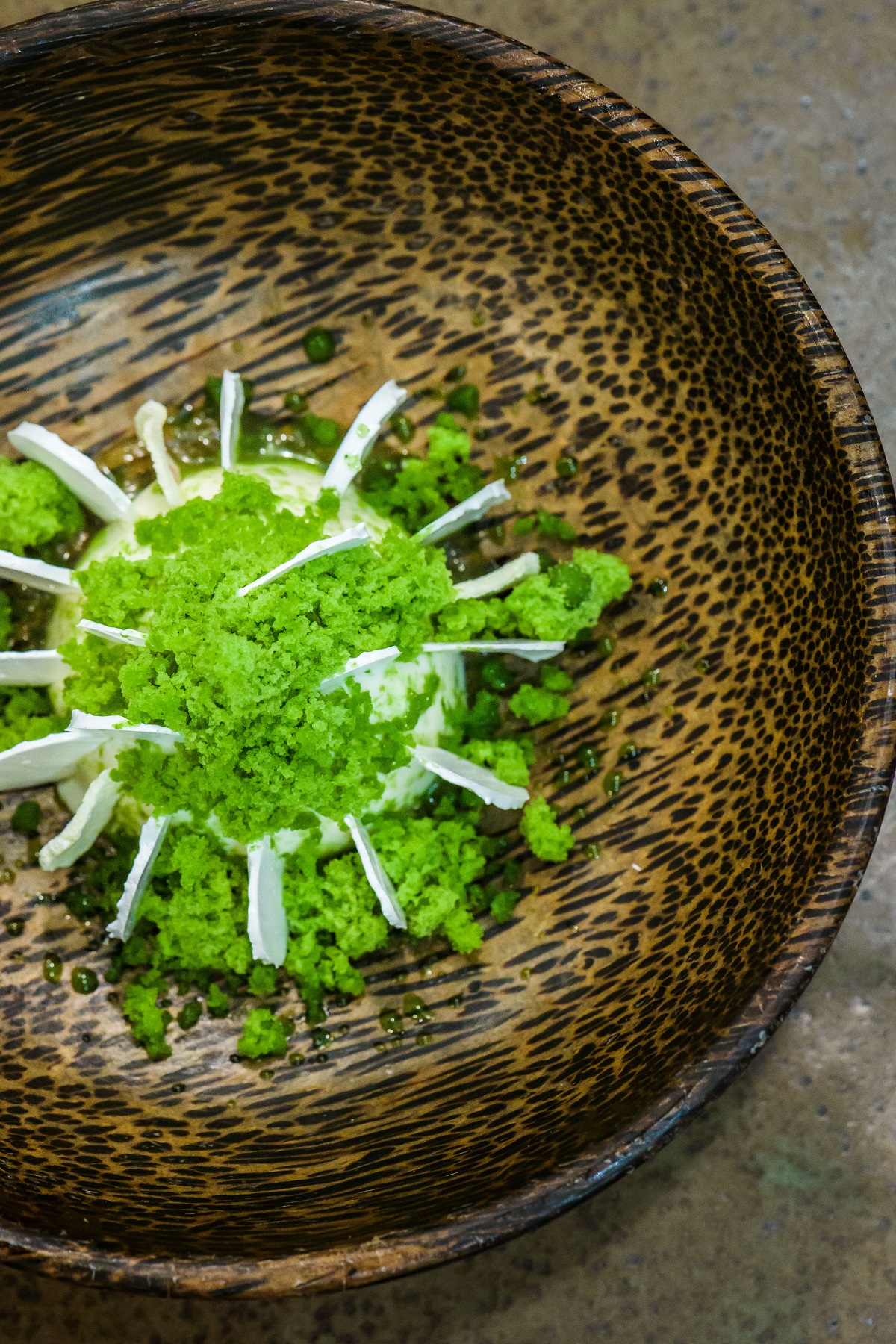 Dessert came in three waves. A pleasing Sheep’s Yoghurt with Apple and Sorrel Kombucha was first. With satisfying discs of meringue, an emerald green sweet and sour snow and a lightly set yoghurt – It was the best palate cleanser I could have asked for.

We finished things off with a Malt Ice Cream Sandwich and a Hazelnut and Cognac Truffle which were both the chocolatey morsels I needed to tip me over the edge into complete and utter bliss. 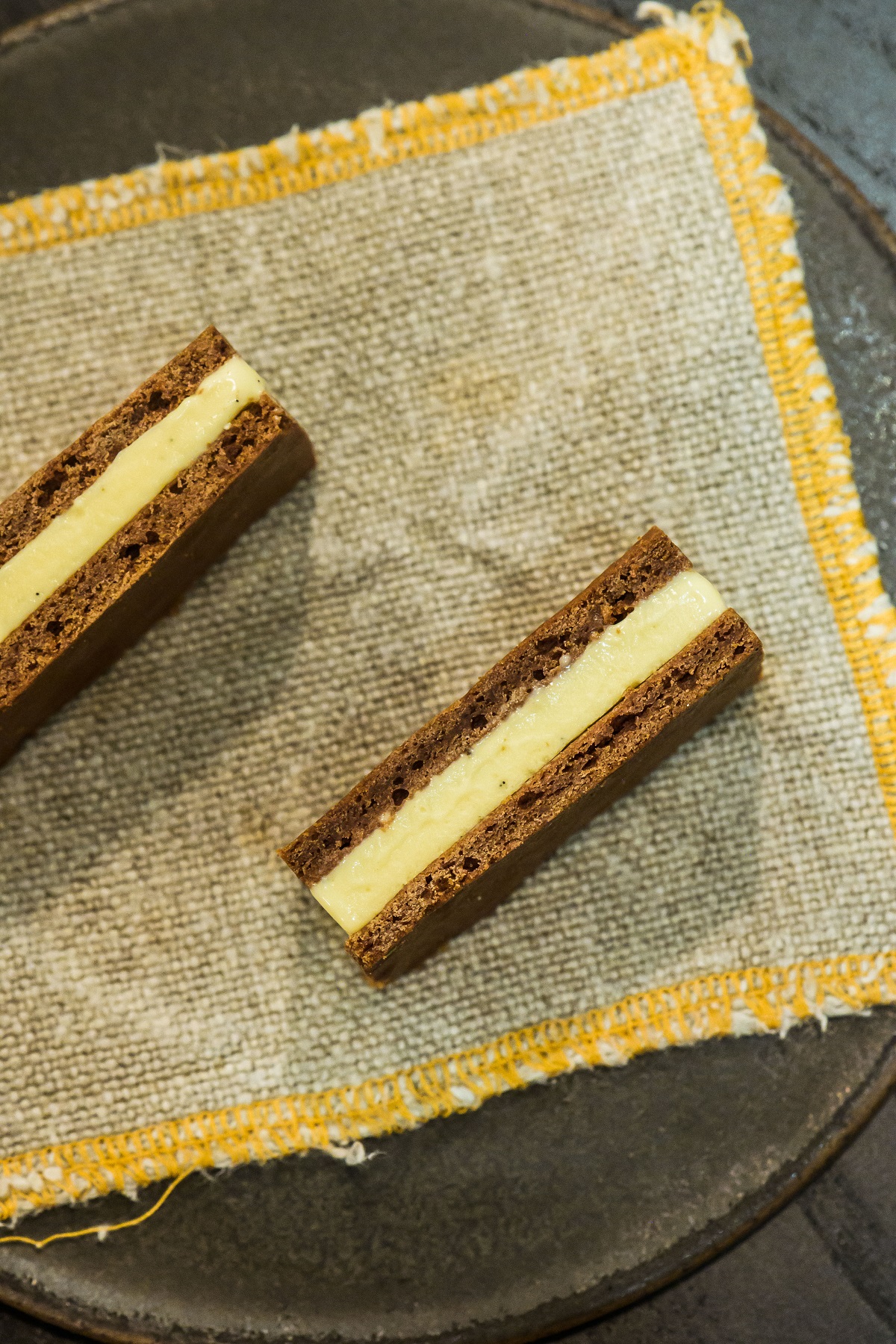 Eating at Mana is like nothing I have ever experienced before. Sure, it is not somewhere you go every day – not at £105 per head without drinks. However, in my opinion, Simon Martin is on to a winner.

He has managed to tap into something that is very much on trend right now and that trend is British food. Everything on the menu is sourced from our rainy shores; from twiggy garnishes to Cornish shellfish and it’s all about as fashionable as it can get. 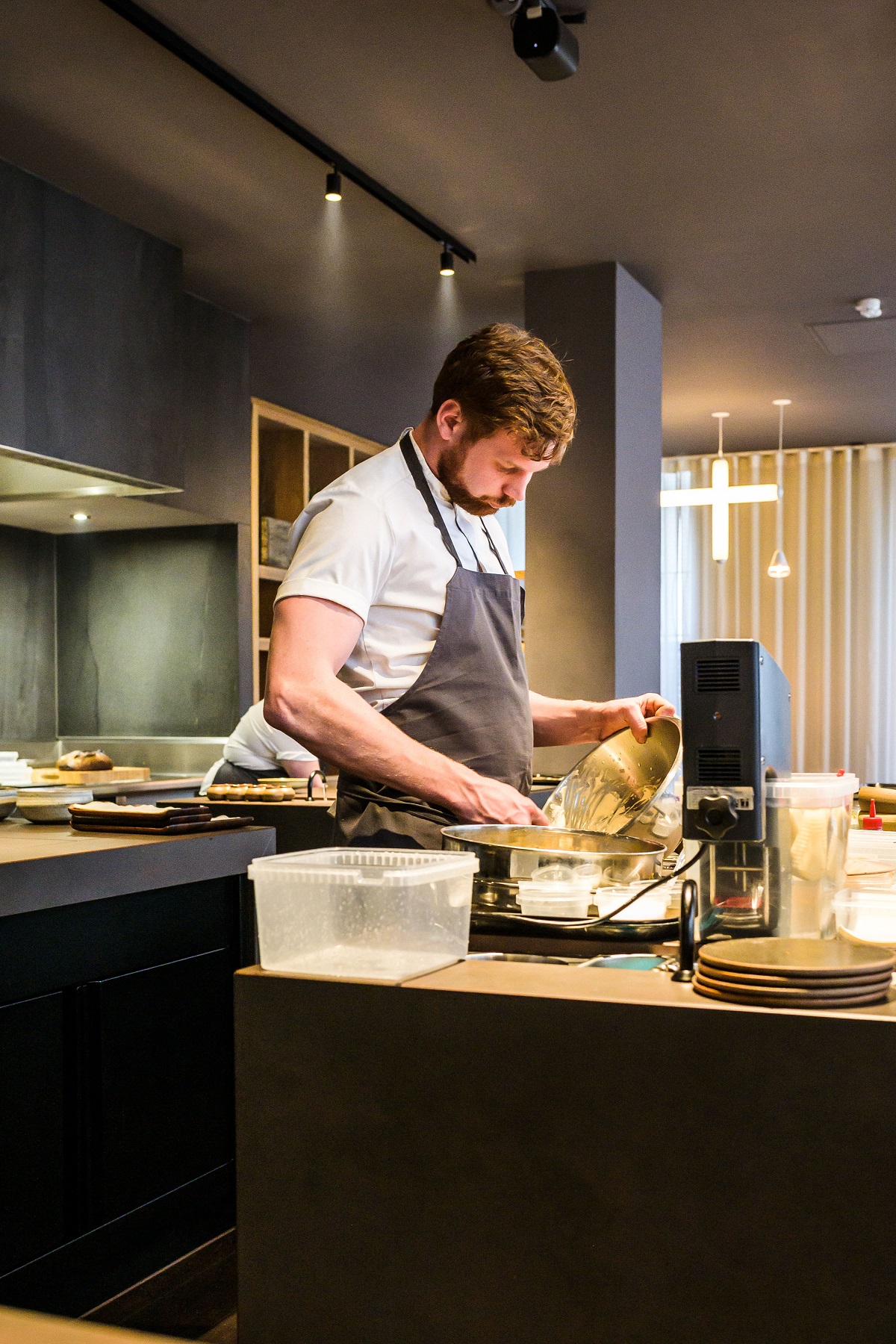 Martin is not just a talented chef who is able to bring modern, conceptual fine-dining to the table, he is aware that we need to learn to love our native ingredients now more than ever, and that is a notion I have fallen utterly head over heels for.

Celebrate 4/20 with Metrodome, HMD and more at Platt Fields Park