The epitome of neighbourhood dining, where the owners are serving up dishes from their front garden. 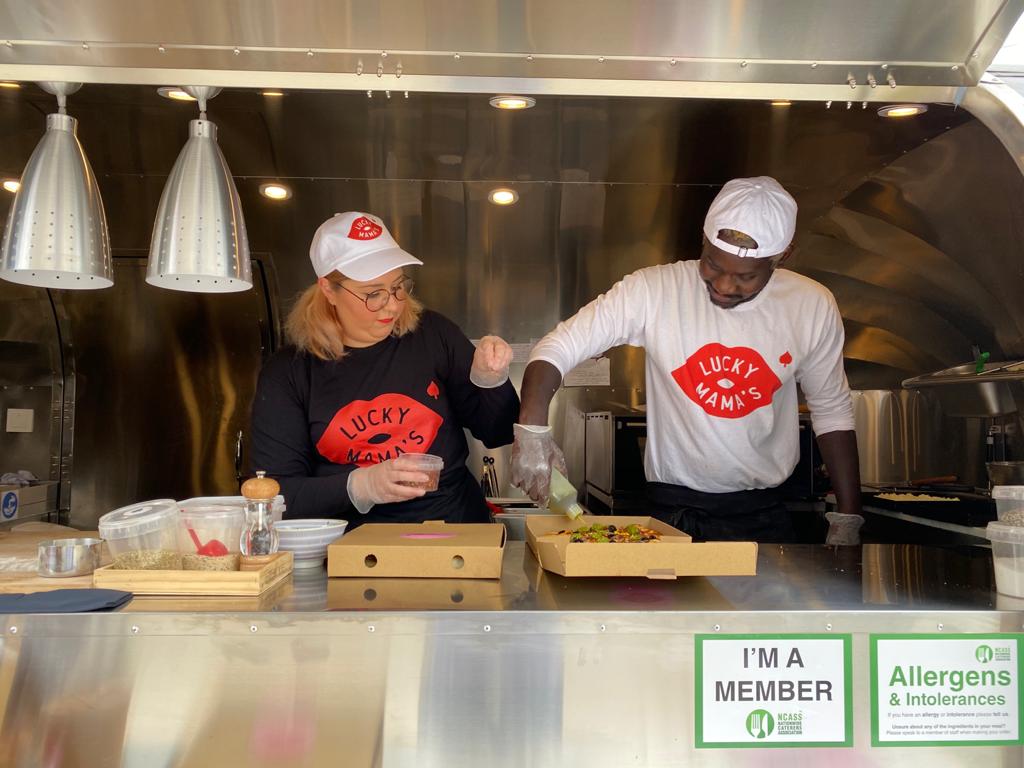 Lucky Mama’s is a labour of love for couple Mamadou and Gaby – a combination of their two favourite things “cooking and carbs!” 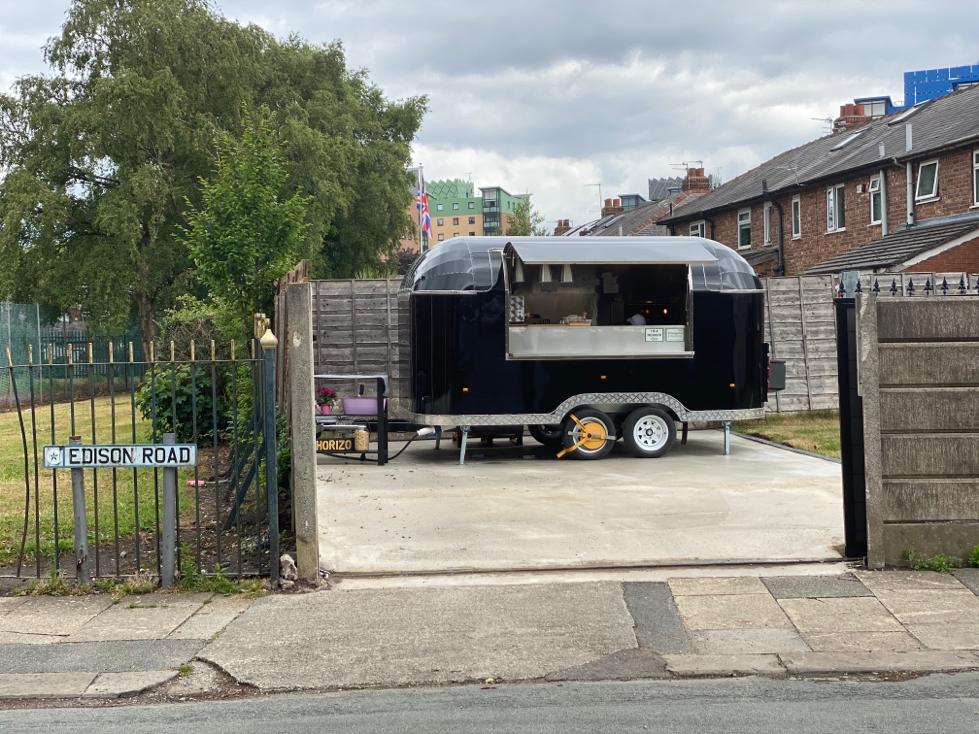 This latest offering on Manchester’s street food scene has come about as a direct result of the COVID-19 pandemic. Initially buying the food truck to travel around festivals and events this Summer, Mamadou and Gaby were forced to completely re-think their plans when they all got cancelled.

“The outbreak of the coronavirus forced us to think outside of the box, we had our truck just sat there in the yard, so we decided to offer takeaway and deliveries around Salford.” 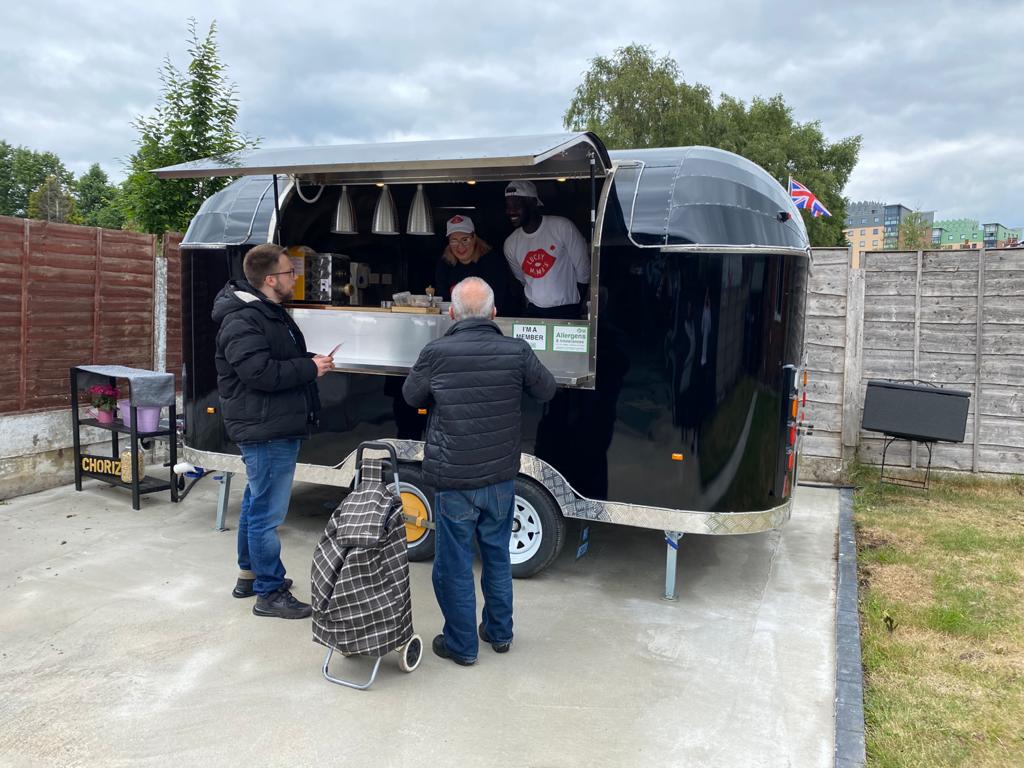 There’s a real community feel to the operation. Within five minutes of being there, two neighbours popped over for a chat and Mamadou kept nipping around the estate to make deliveries.

Before he was put on the government’s furlough scheme at the beginning of lockdown, Mamadou had worked as a chef for a range of 4-star hotels, as well as working for a popular chain of Italian restaurants. His passion for food was clear to see from the outset, as he told me how fresh the ingredients were and that what you’ll get from them is quality restaurant food you can eat on the go, or as he called it “the same food we cook for our family and friends!” 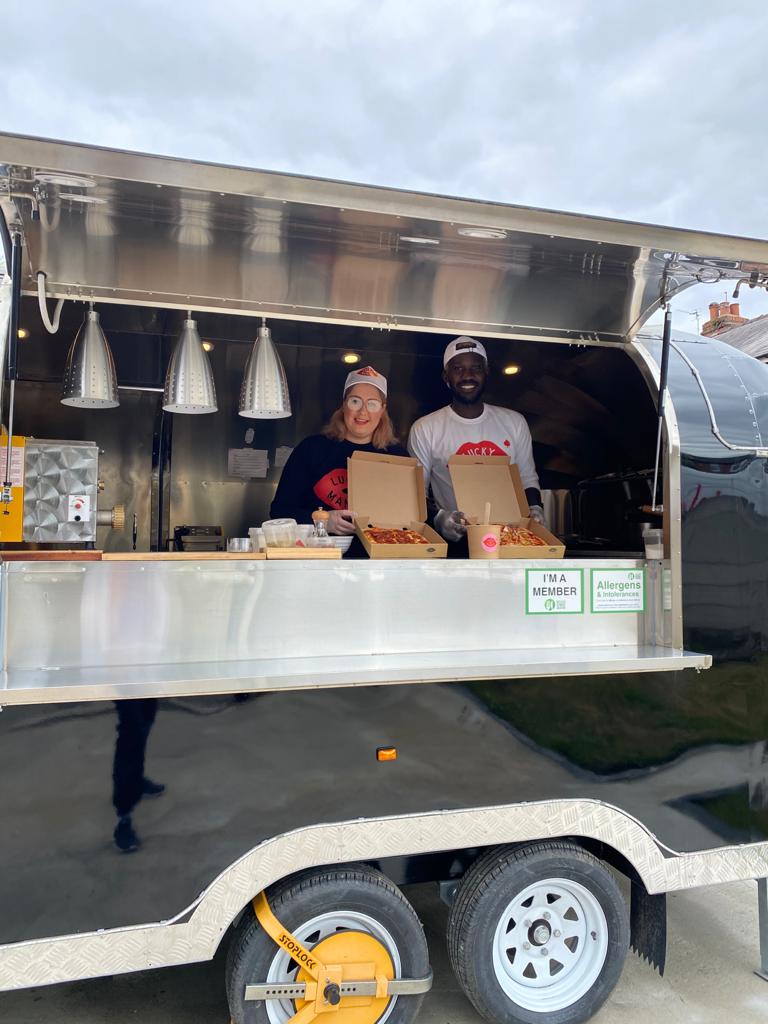 According to Gaby, the perception of the food was a difficult thing to tackle at the start; “We found that people were surprised that we were preparing Italian food!”

“We had some people approaching the truck assuming we do Rice & Peas and Jerk Chicken!”

This misconception most likely arose from Mamadou’s Senegalese heritage and, adding to the fact that Gaby is half-Spanish and half-Chilean, there seemed to be a bit of confusion all round. 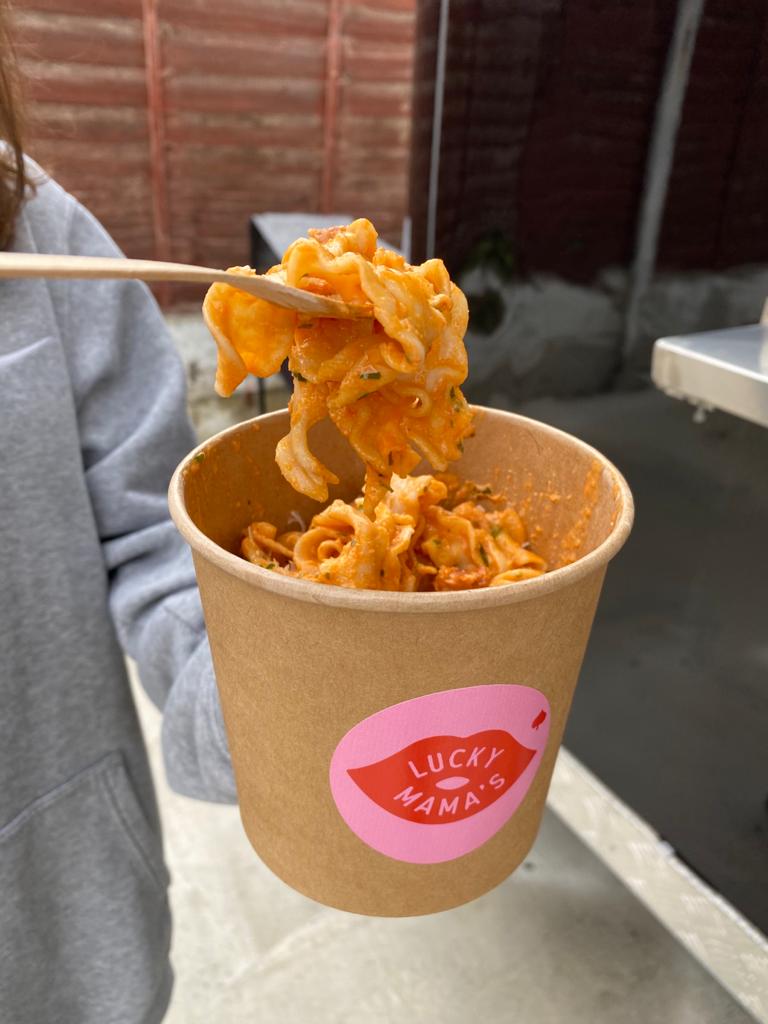 Growing up in Italy though, Mamadou’s food is most certainly Italian, but with his African, and Gaby’s Spanish influences thrown in there as well. They were even inspired by the people who thought Mamadou was Jamaican to come up with two new dishes on the menu – their Rasta Pasta and Rasta Pizza!

So, what’s on the menu? Well, they proudly serve up their very own freshly made pasta – that “simply tastes better and also absorbs more of the sauce than the dried stuff.”

There’s plenty to choose from, but I was immediately drawn to their Bigoli Ragu (£6.50) – a particular favourite of Mamdou and a dish that is inspired by his childhood in the Veneto area of Italy. 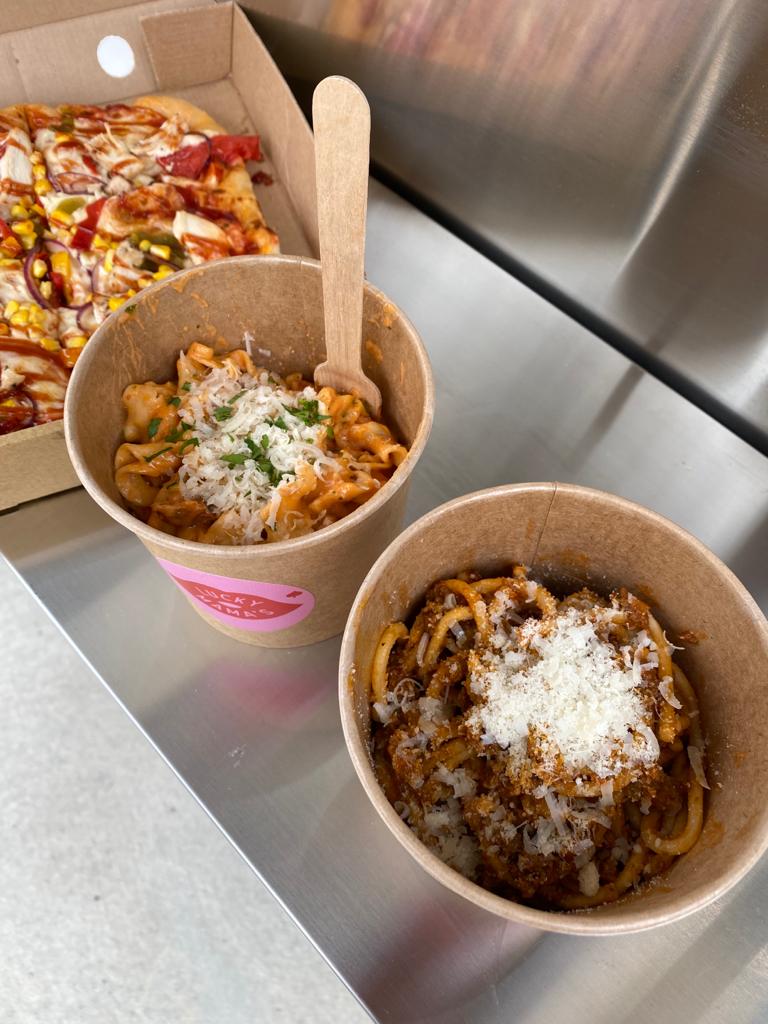 “Bigoli is a long, thicker than spaghetti pasta, and in this dish it is combined with our slow cooked Ragu using simple and fresh ingredients.” So that’s halal beef mince, onions, carrots and celery – all coming together to create a pasta dish that I absolutely loved!

I also tried their Mafaldini Rose with Chorizo (from £6.00) – a unique Lucky Mama’s recipe that you just won’t be able to find anywhere else. Again – it was outstanding. 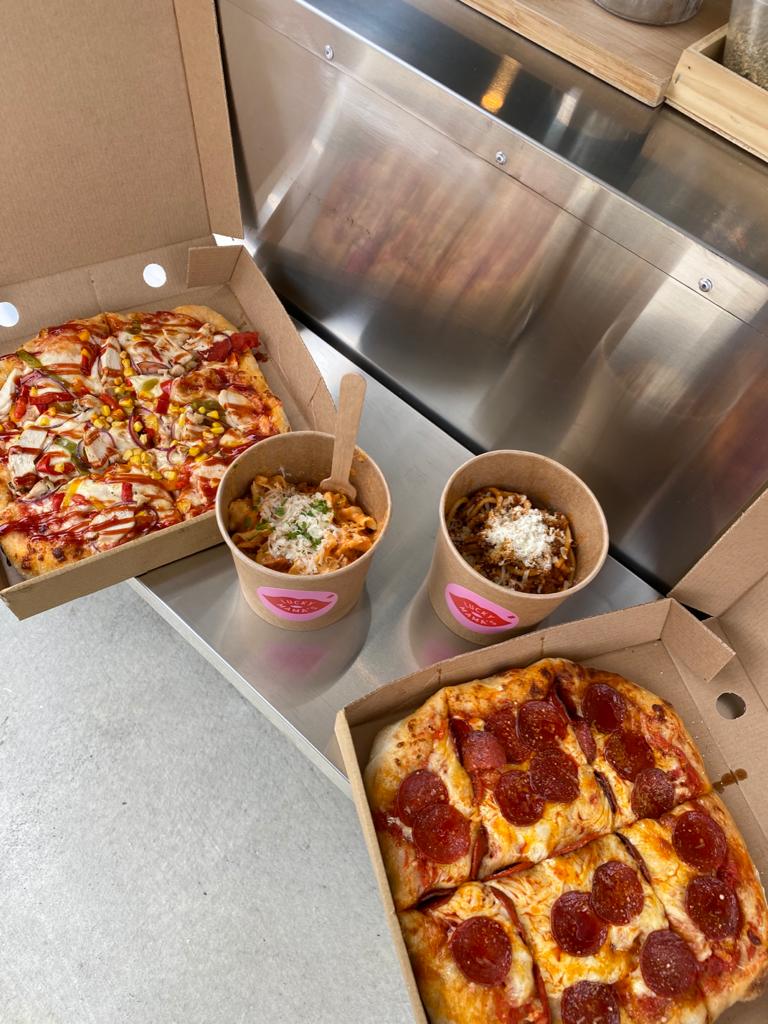 “We make authentic Neapolitan pizza with a softer dough here” – so you should expect a fresh, but potentially messy experience! Unusually, the pizzas are square, but this means they’re easier to transport and eat, as well as being unique to Lucky Mama’s.

We tried their Americana (£8.50) which was inspired by the legendary square pizzas at Prince Street Pizza in New York, as well as the Barbacoa (£8.00) a particular favourite of Gaby’s who loves a BBQ drizzle. 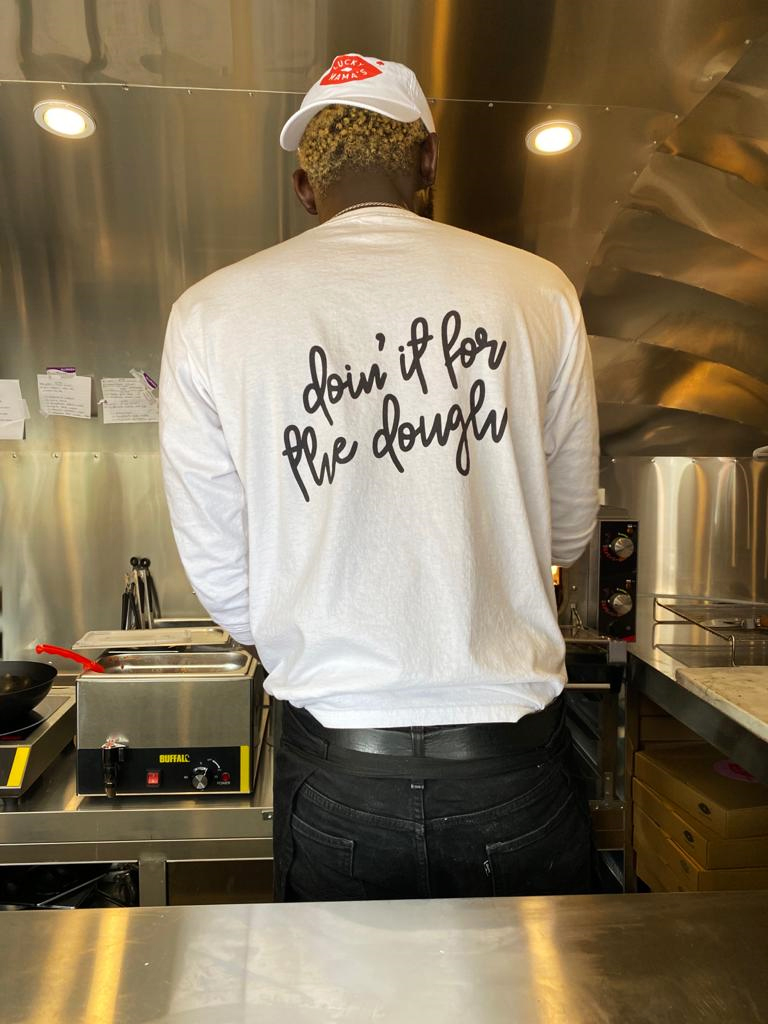 By the end of the feast, my eating partner and I we were absolutely stuffed and mega impressed with the experience. The food is truly outstanding, and really not what I expected. They’ve managed to create fast pasta takeaway dishes that are fresh and above all – really tasty. Their pizzas are great too.

Next time you’re in the area you really HAVE TO check this hidden gem out, and if you live within their delivery zones Mamadou himself will come and deliver to your door with a massive smile on his face!