A project pulled together with passion and a real love for the city suburb... 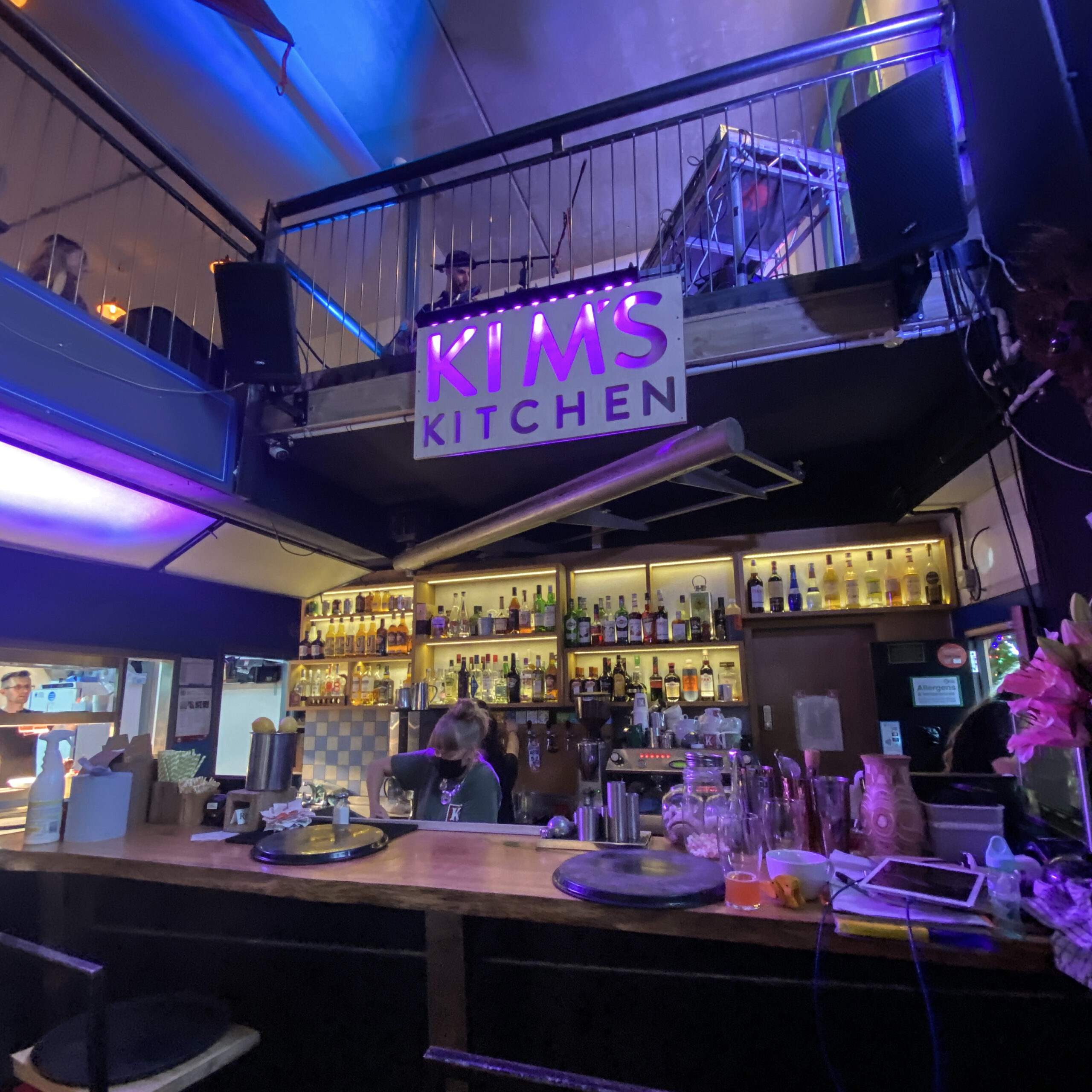 Steeped in a rich, often brutal post-war history, communities and families in Hulme have experienced considerable, monumental shifts in daily life over the last couple of decades. Years that saw the demolition of the notorious Hulme Crescents, paving the way for the hopeful 90s regeneration and reintegration of the area.

The one thing that has endured throughout the changing years in Hulme though is an almost assertive community spirit amongst residents and locals, and it’s this passion that is literally plastered all over Kim’s Kitchen, who have officially opened their doors this week. 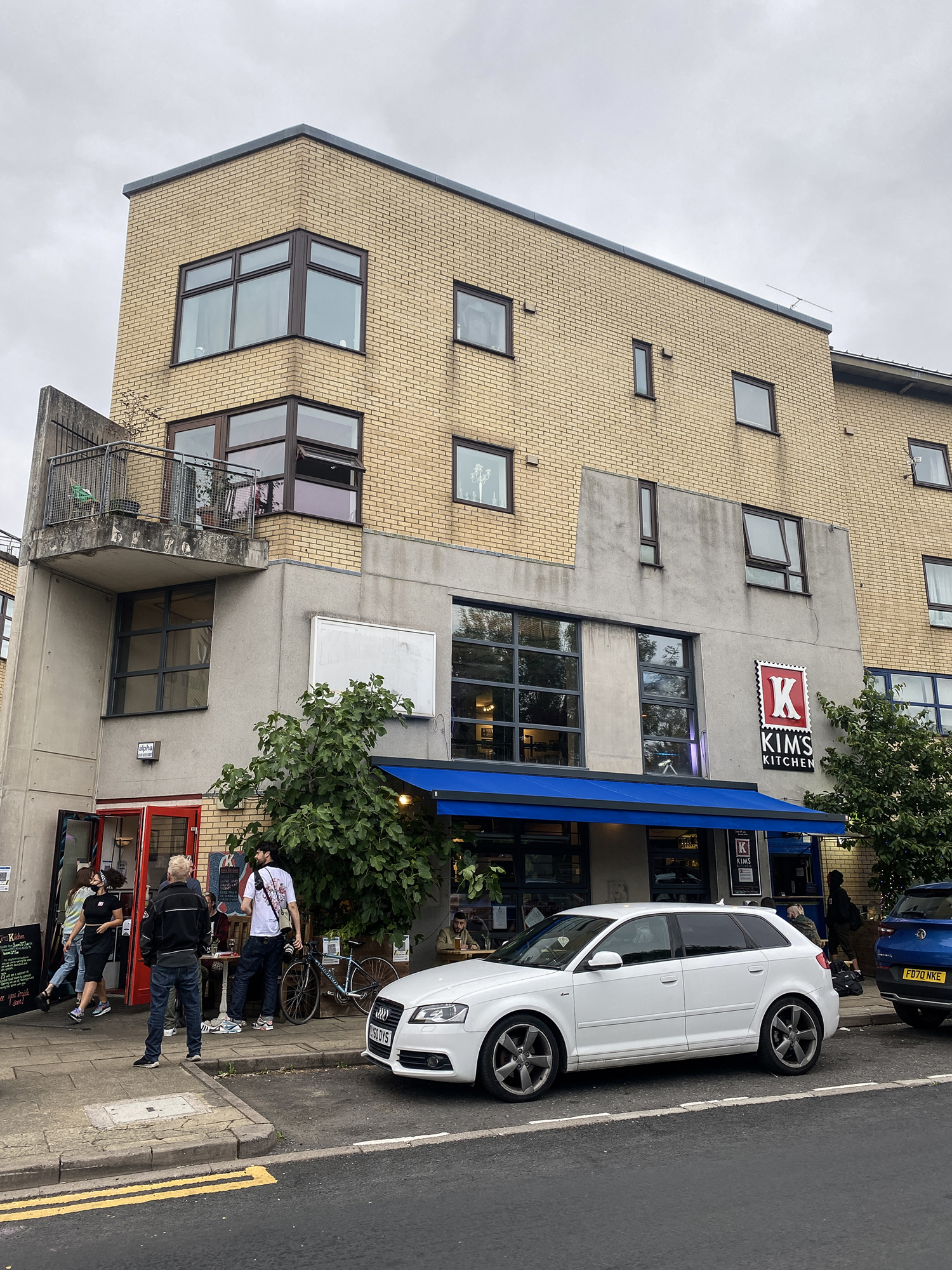 Of course, anyone who has lived or worked in Manchester for more than 5 years will have likely heard of Kim’s By The Sea, a former Mediterranean-inspired eatery, café and bar – but to say that Kim’s Kitchen is a ‘re-brand’ of Kim’s By The Sea would be a great disservice to the tireless efforts of the people who have made this place a reality.

It’s not just a lick of paint, a few new dishes and a couple more cans of Red Stripe, Kim’s Kitchen is an entire re-invention of what it means to be a local, independent business in Hulme, an area that is still experiencing significant transformation, as university campuses expand, and the boundaries between the city centre and its suburbs slowly erodes. 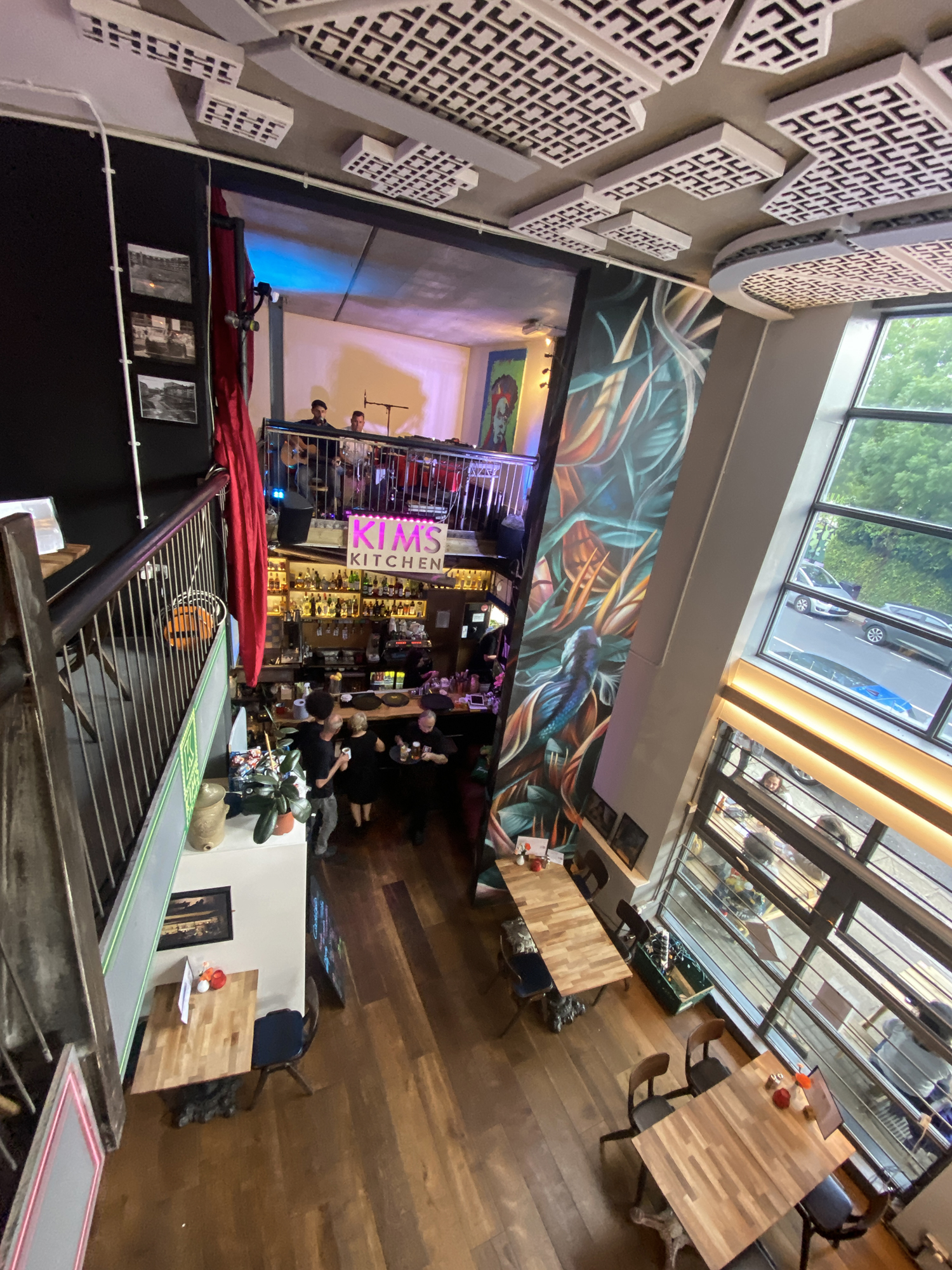 Helmed by a dedicated and fervent group of locals, Kim’s Kitchen is quintessentially, brilliantly, passionately all things Hulme, from the history of the area adorning the walls, the calendar of entertainment and live events and the food – it’s a devoted love letter to the area where many call home.

You’ll find little nods to local institutions in everything they do, from hosting a spoken word evening that you could easily find on the roster over at the neighbouring NIAMOS Centre, to the Curried Goat, a nod and appreciation to the area’s strong Caribbean roots and outstanding eateries. 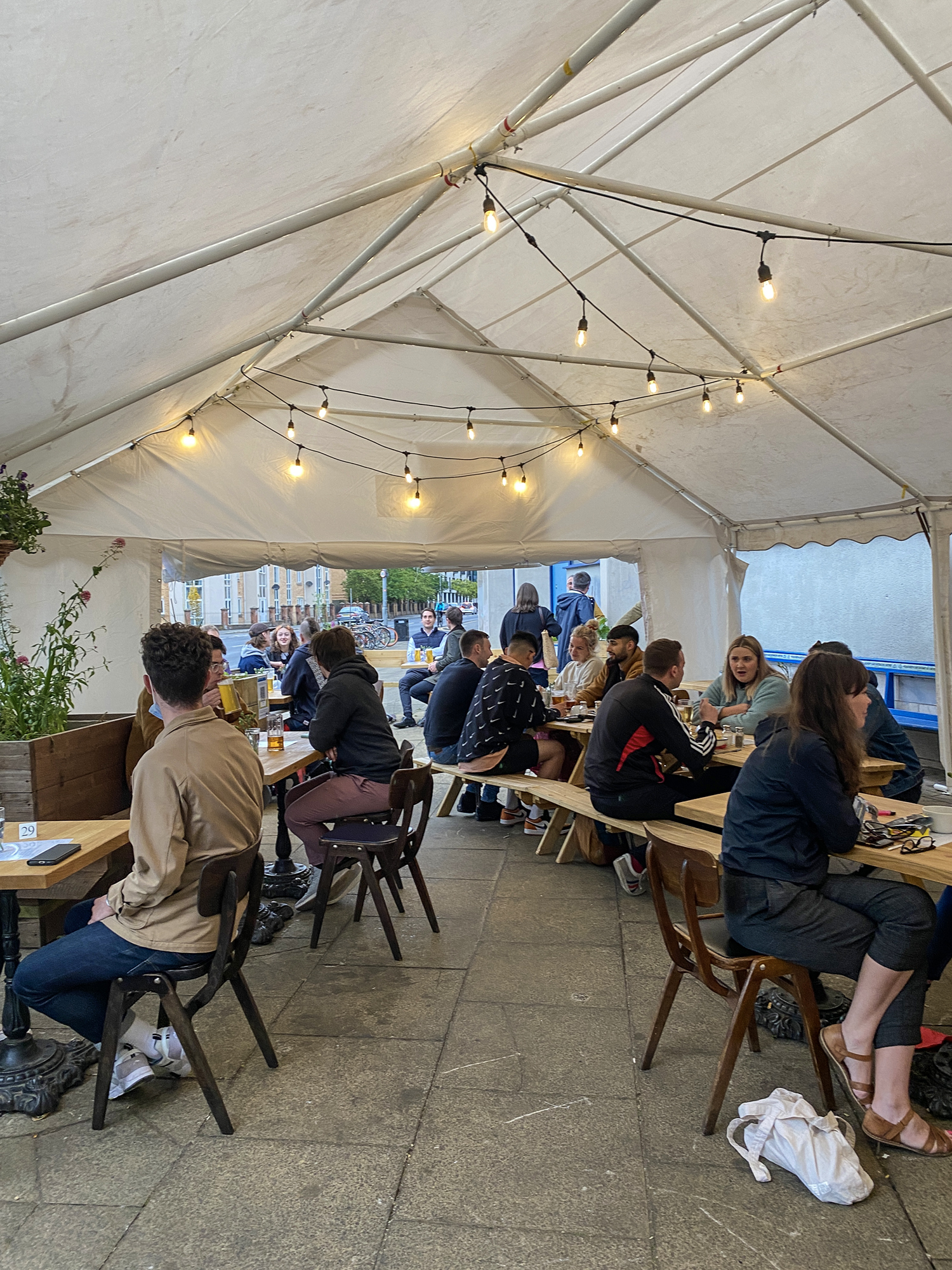 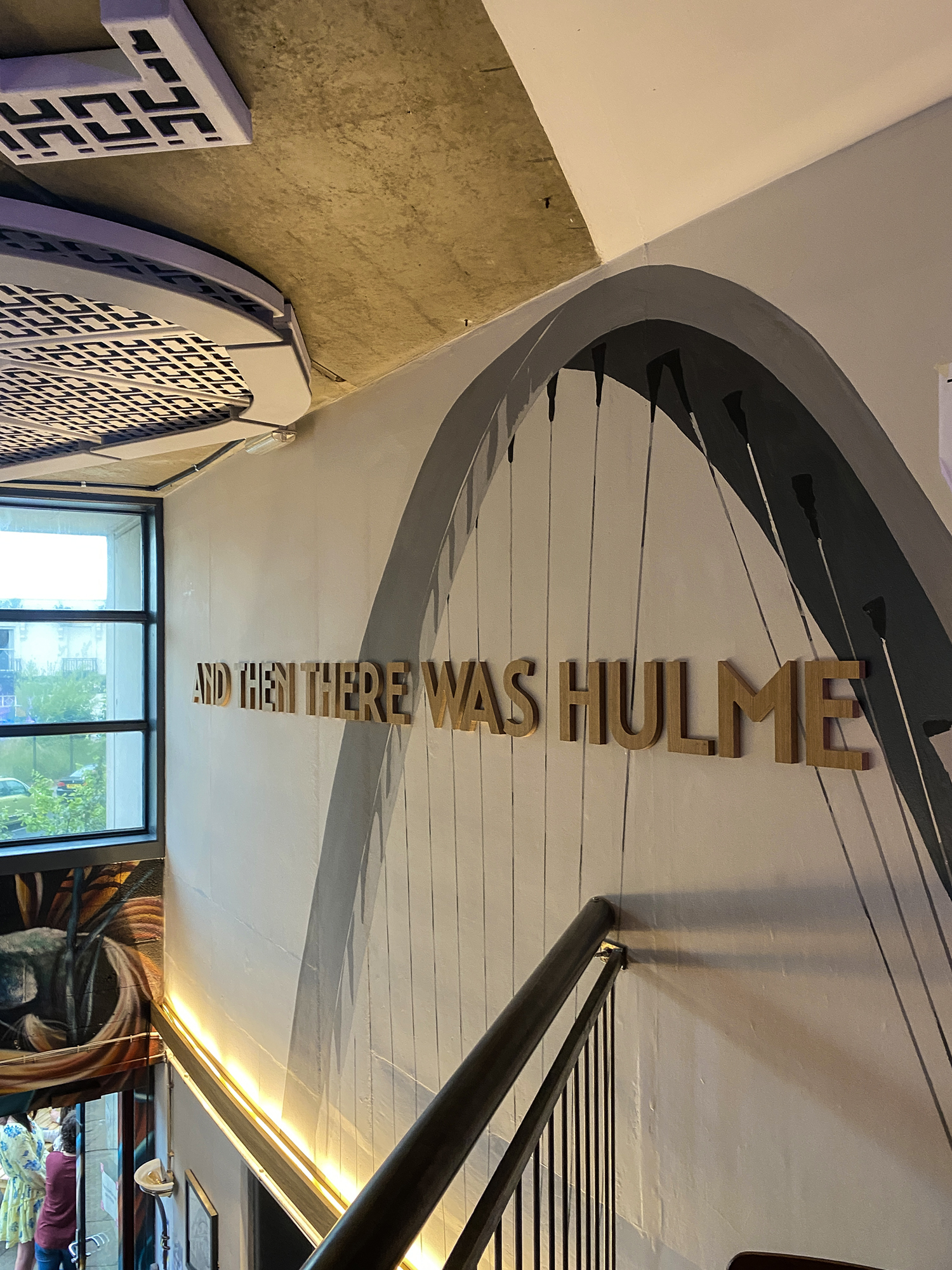 These last six months has seen Kim’s transform and adapt in the face of probably the most difficult time for any independent business to operate, never mind open.

They set up their very own ‘roadmap’ to when they could finally open their doors, starting late last year with ‘Kim’s Away’ serving food and drinks from a hatch outside, to a delivery service and finally – a covered and heated outside area for dining and drinking.

They’re now fully open inside now too, and it’s a genuine pleasure to see what they’ve done to the place. 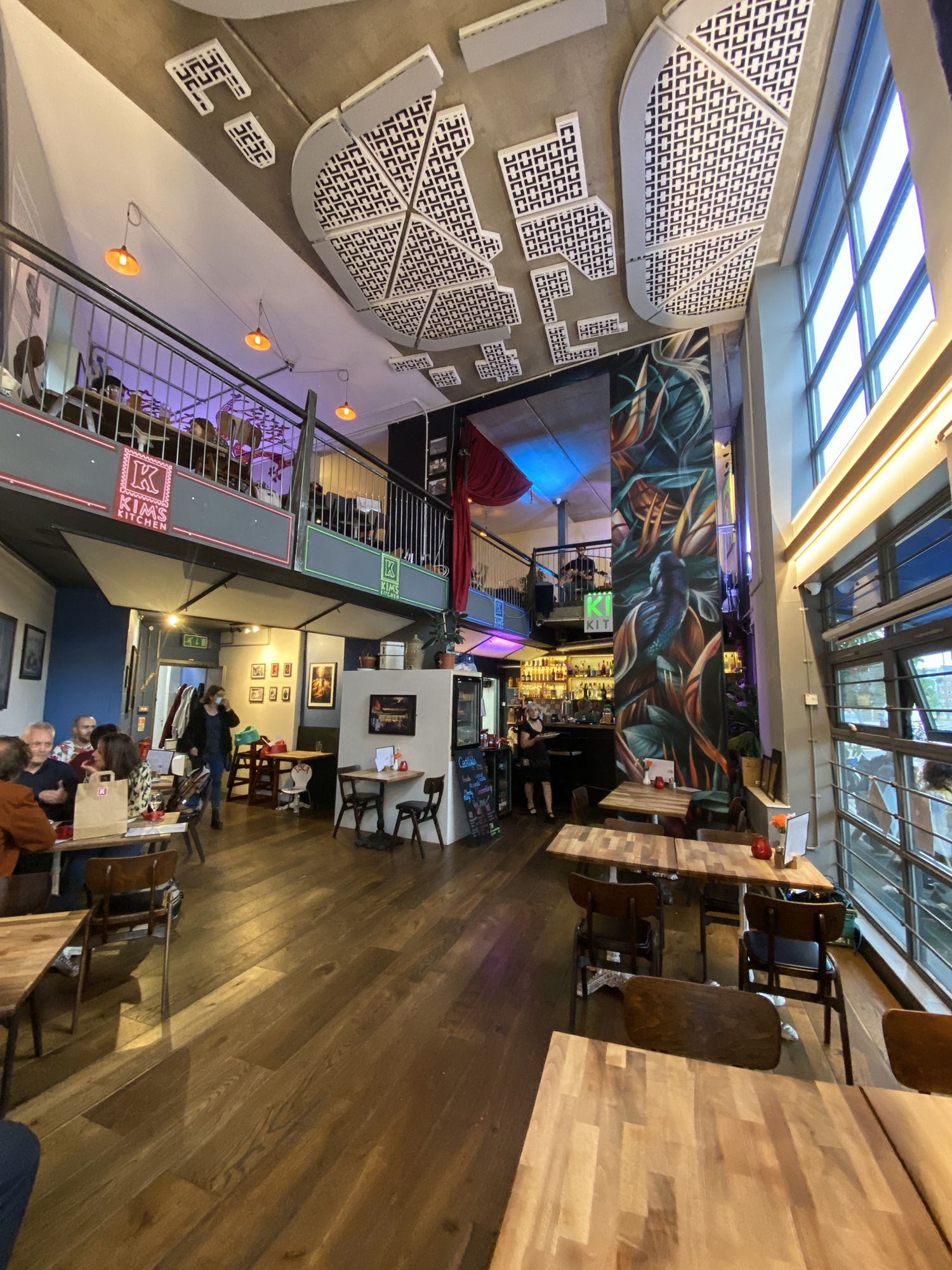 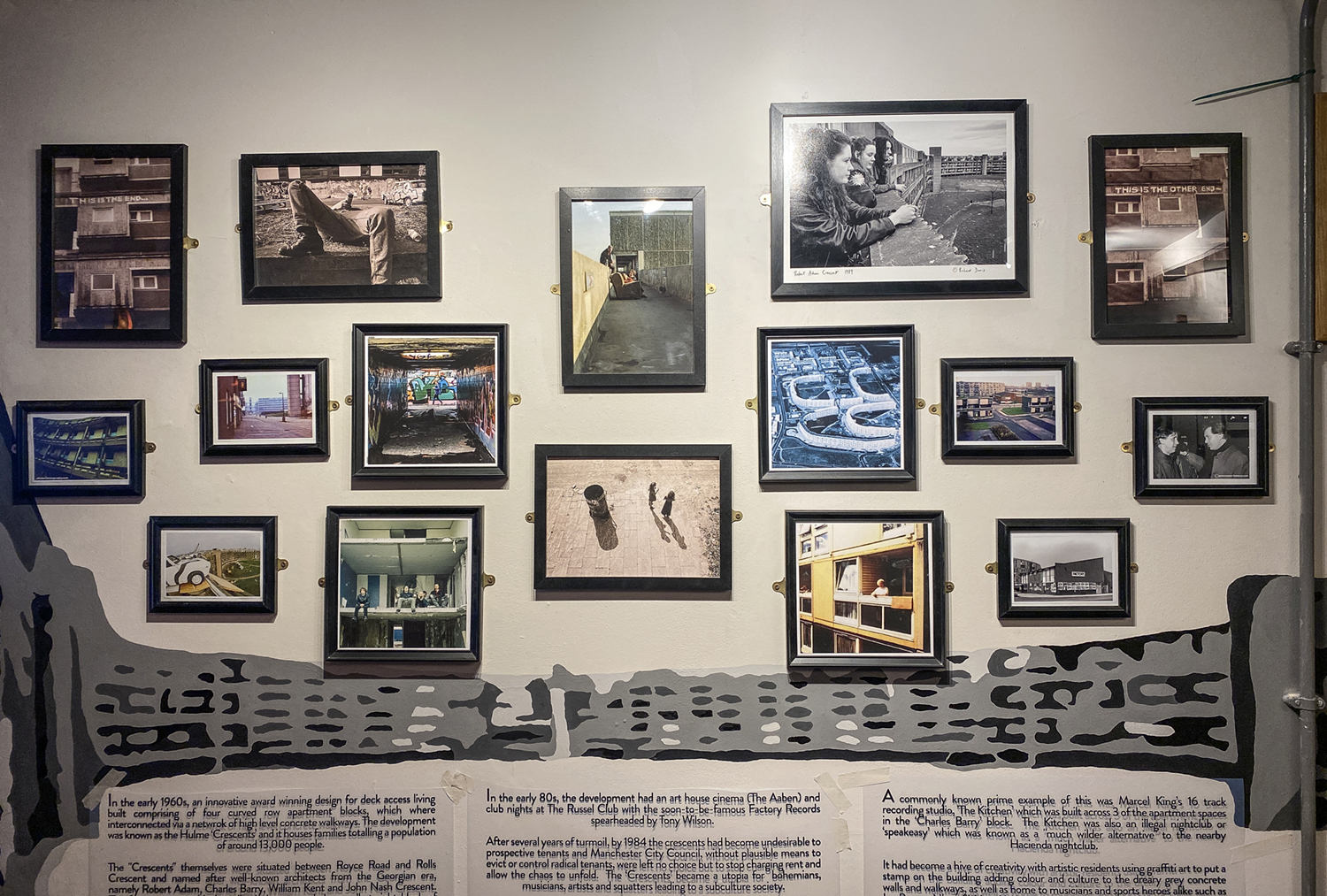 There’s a rustic, almost chaotic feel to the place that instantly makes you feel comfortable and at home. It’s cluttered but it’s inviting, the entire space dominated by the well-stocked bar and dedicated stage directly above – the ideal perch for local performers and musicians to bash, bang and bard their craft.

With regular events throughout the week, you’ll invariably find yourself faced with some spoken word, DJ sets or live music from Hulme’s long roster of performers and promoters, from Hit&Run, Chunky, Metrodome, Sayin?, Fox and countless other highly talented people who have a firm finger (and toes) in the project. 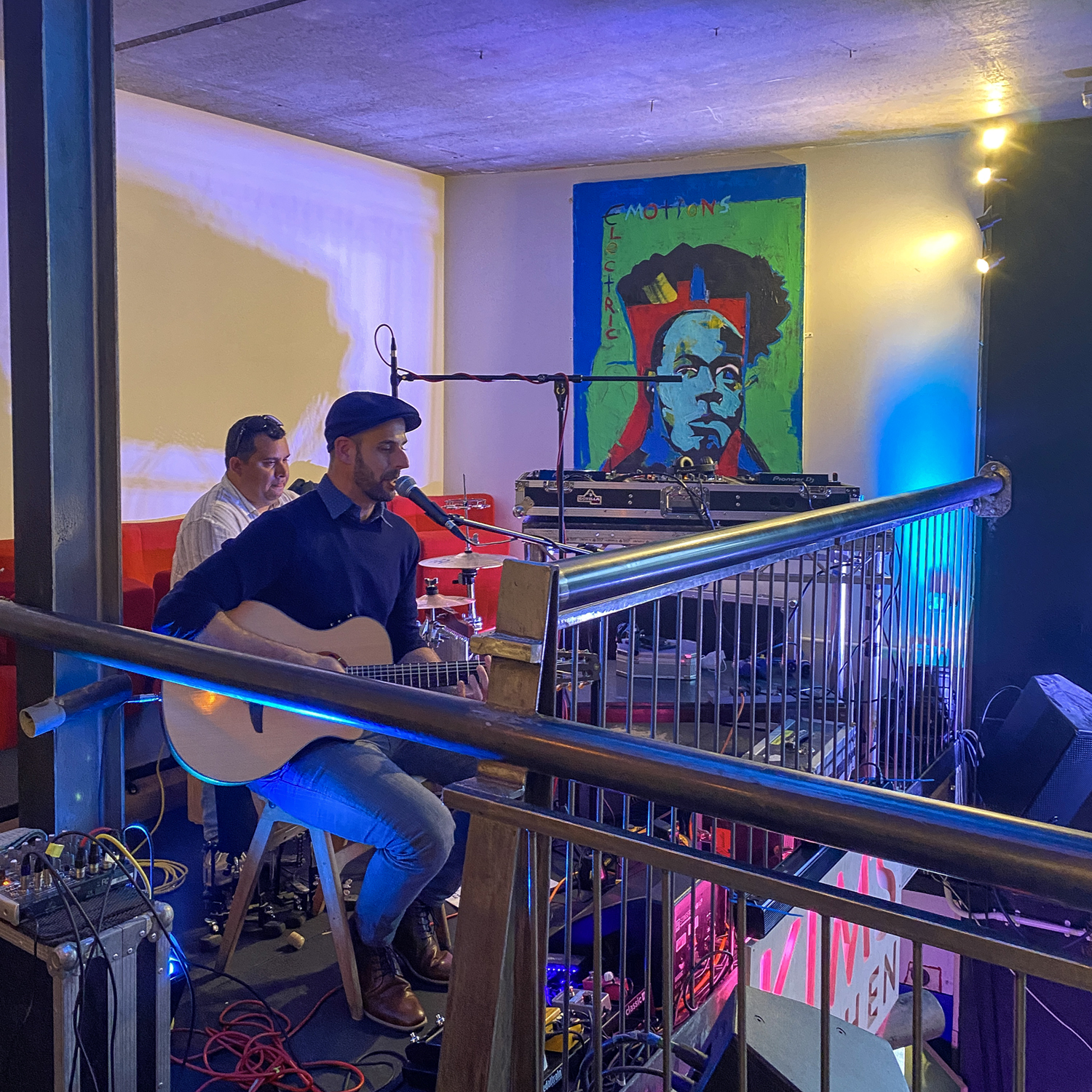 The moment you step inside Kim’s you’ll notice the huge plates of food being carried around by a dazzling number of servers, and if you’re not picking up the food menu the second you sit down then you’re surely some form of emotionless robot who only lives on fish and rice cakes.

The number of dishes on offer is monumental, a number which is added to with a set of daily specials – each one hearty, massive and properly home-cooked – just like what your mam would make you. 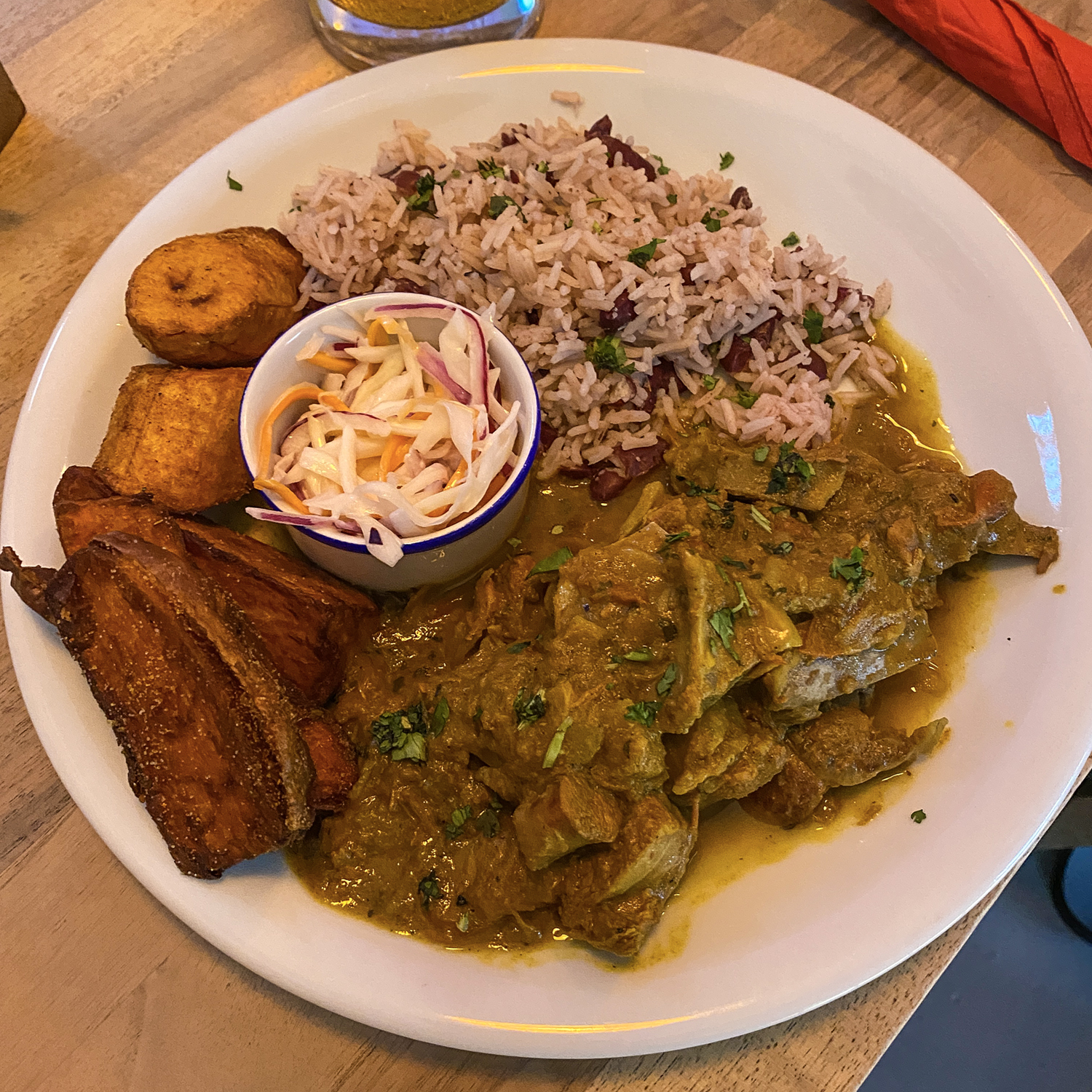 It’s all exceptionally well done – with a truly sublime signature Curried Goat that just needs to be tried, loaded burgers, Salt & Pepper Chips, Bangers & Mash and contender for the best Mac & Cheese in the whole city. 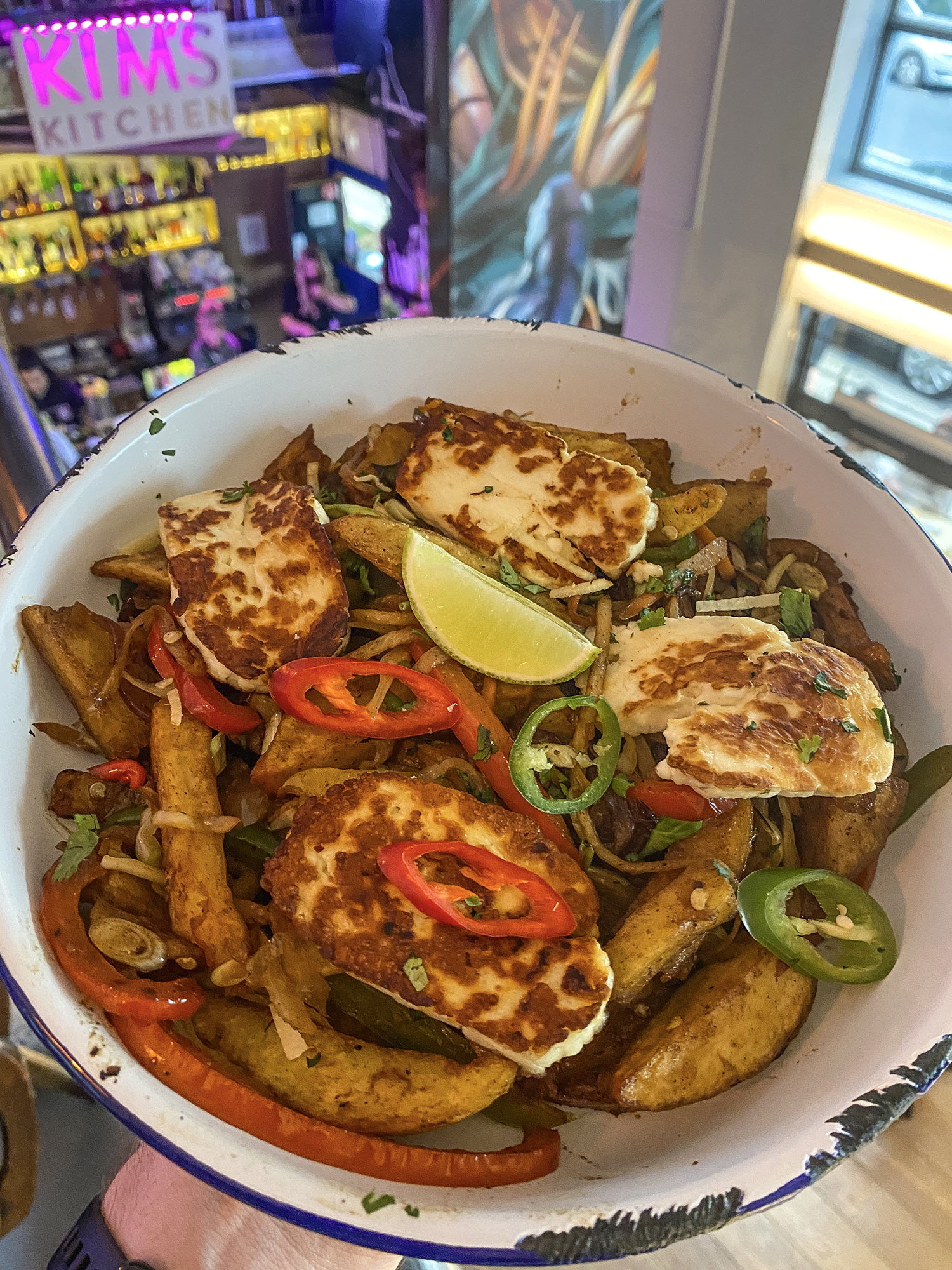 One last thing that encapsulates everything that Kim’s Kitchen is all about, and you’ll find it on the ceiling above you as you’re eating, drinking and (hopefully soon) dancing.

Look up and you’ll see some sound proofing, installed to limit the reverb in the flats above, but designed to resemble a top-down view of the old Hulme Crescents. 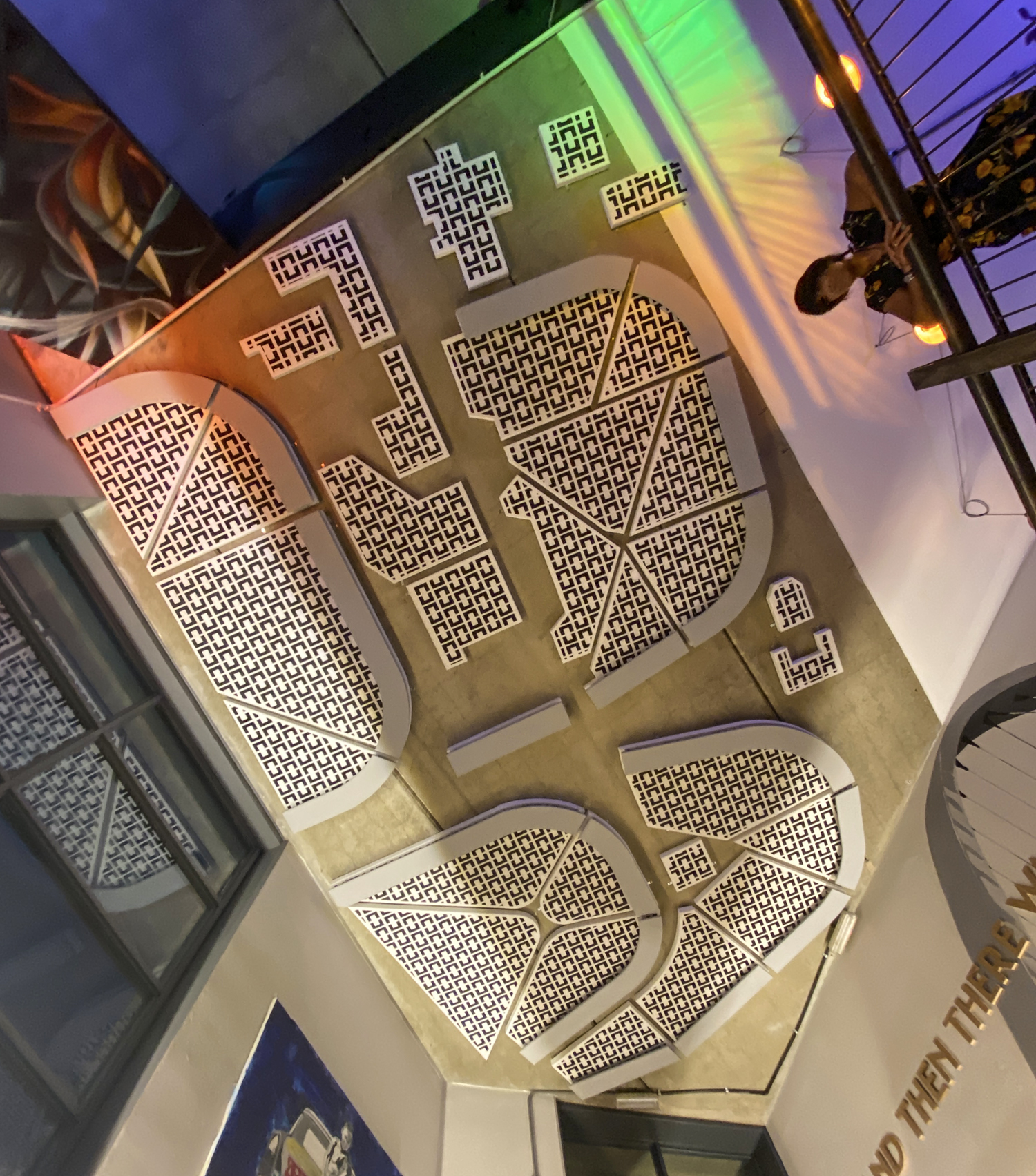 It’s striking and a cheeky little nod to the area’s history, a community that for years has been beset by bad decisions, failed regeneration and difficult times. Kim’s Kitchen doesn’t shy away from this – it’s the venue’s identity and a project that perfectly encapsulates the magnificence of Hulme and it’s people.

Myths of Manchester: The Quality Street Gang Chased The Krays Out of Town