Who knew a Chippy Tea could be so fine? Six by Nico Reviewed

Last week I was asked to review Chippy Tea and I can’t help but feel like my career has peaked.

Six By Nico is the latest restaurant to take Manchester by storm with its unique dining concept. With the capricious nature of modern-day dining culture taken into account, the idea of Six By Nico is to keep things fresh by completely scrapping each concept every six weeks and moving on to something new.

Born in Glasgow in 2017 from a passion of experimenting with new ingredients and developing unique dishes, Nico’s promises to keep us on our tippy-toes by changing things completely – switching from Thai Street Food to Nordic Cookery effortlessly and in a heartbeat.

Opening last week with their ‘Chippie Tea’ six-course menu, we went down to check it out. Now I am not going to sit here and tell you that a modern, classy revamp of fish and chips is anything new – in fact, it is quite the opposite.

People have been making posh fish and chips and charging a small fortune almost since the beginning of time – but that is the thing about Nico, the quality and general finesse is fantastic and it is cheap as well…chips. I couldn’t wait to dive in.

First up was a fine-dining spin on a quintessential late-night munch – Chips & Cheese. The combination of these two things, along with Jagerbombs and bad house music, is incredibly indicative of my time at uni. I never used to jump in a taxi at 3am without a polystyrene box of chips and cheese. Ever. So it is safe to say I was looking forward to this one.

Formed of a salt and vinegar spiked potato croquette sat on a Parmesan foam and peppered with scraps and a dash of curry oil – I must say, it tasted much like a portion of chip and cheese to me and I liked it.

Next was a rendition of Scampi formed of breaded monkfish cheeks paired with pea emulsion, herb butter and a neat quenelle of gribiche with plenty of capers and fresh notes of dill. My monkfish was a tad on the tough side and was lacking in salt, but that herb butter made up for a multitude of sins.

Steak Pie was my favourite dish of the six-course experience by miles. The main element was a juicy, succulent ball of the slow-cooked beef shin. Full of deep, complex flavour, this beef was unbelievably delicious and treated with such care in the kitchen with stunning results.

It came paired with a rich red wine gravy spiked with plenty of wholegrain mustard, mushrooms and burnt onion ketchup with culminated into something that tasted like the inside of a really fucking good steak pie. All that was missing for me was some kind of pastry element as something crisp and buttery to contrast the earthiness of the other elements on the plate – but hey, there is always room for improvement.

The Fish Supper came next which was the dish everyone was waiting for. ‘Posh’ fish and chips is something done to death, but I can safely say that Six By Nico managed to breathe some new life into the whole thing.

I was glad they stuck with cod. It’s a classic, and it shouldn’t be messed with and I’ve got to say they treated it beautifully.

The fish was delicate and flaky with an excellent half-battered top which allowed the fish itself to take centre stage – we know the best bit is usually the batter at the chippy, and this small element helped remind us of our fine dining context.

All the acquirements did this also. There was some sort of fish croquette which my culinary deduction skills told me was most likely salt cod, confit fennel, samphire and tart beer pickled mussels. It was a fun play on a fish supper but I must say it was lacking in the chips, which is sacrilege if you ask me.

I bet at this point you can predict that there is only one thing missing from this retelling of a chippy tea and that is strangely delicious foot-long sausages and when it came to the sausages, Six by Nico smashed it.

Slow-cooked belly pork was ripped to pieces and stuffed inside a delicate thatched potato skin which was the perfect, crisp, vessel for that succulent pork. Honestly is was terrific, and here in the Finest office, that is a complement of the highest calibre.

As for the other bits on the plate, I was less than convinced. On paper, salt-baked celeriac, caramelised apple and black pudding sound like a pretty good combo – but they ended up being quite small elements that were overpowered with an overwhelming sweetness from the apple puree.

Perhaps it is my slight aversion to sweeter things, but I wanted more of the twiddly bits and less of the sweet sauce. Be that as it may, the ‘sausage’ part was fabulous and worth its weight in gold. Top marks for the smoke-dome reveal also.

On to dessert, we were reminded of Six By Nico’s Scottish roots with the Deep Fried Mars Bar. Now I am embarrassed to say that I have never actually sampled a deep-fried Mars bar, despite my Celtic roots, so this was a first for me, and one I was certainly excited about.

Turns out it was just nice as all my red-headed cousins had said. Chewy, crispy and most importantly HOT, it was a fantastic loss of my deep-fried snack virginity. It was sickly sweet, but there wasn’t much of it which meant I managed to keep all my teeth intact.

That isn’t to say that we were presented with a tiny dessert though – it came with a chocolate mousse, a lip-puckering orange sorbet and cocoa nibs. As I say, I wasn’t born with a particularly demanding sweet tooth so it wasn’t my favourite dish from the six, but it rounded things off nicely and managed to keep to the theme which was greatly enjoyed.

All in all, ‘The Chippie’ tasting menu will set you back just £28 per person for six courses (see- cheap as chips) which are all pretty palatable and lovely to look at.

Granted, that is still £10-12 more expensive than an actual chippie tea –but if you are sat somewhere between wanting something comforting and familiar yet fancy, this dining concept is the only answer.

Better get a move on though, you’ve only got six weeks left to try it. 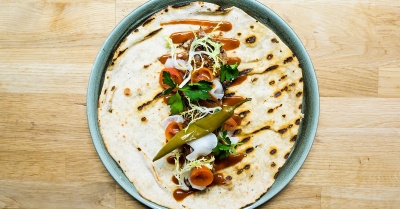 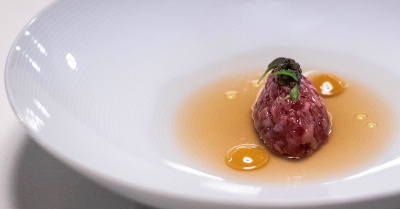