A suburb that's been criminally overlooked for years, especially considering its proximity to the highly desirable areas of Chorlton and Altrincham, Stretford is finally starting to get some recognition as a great food and drink destination. 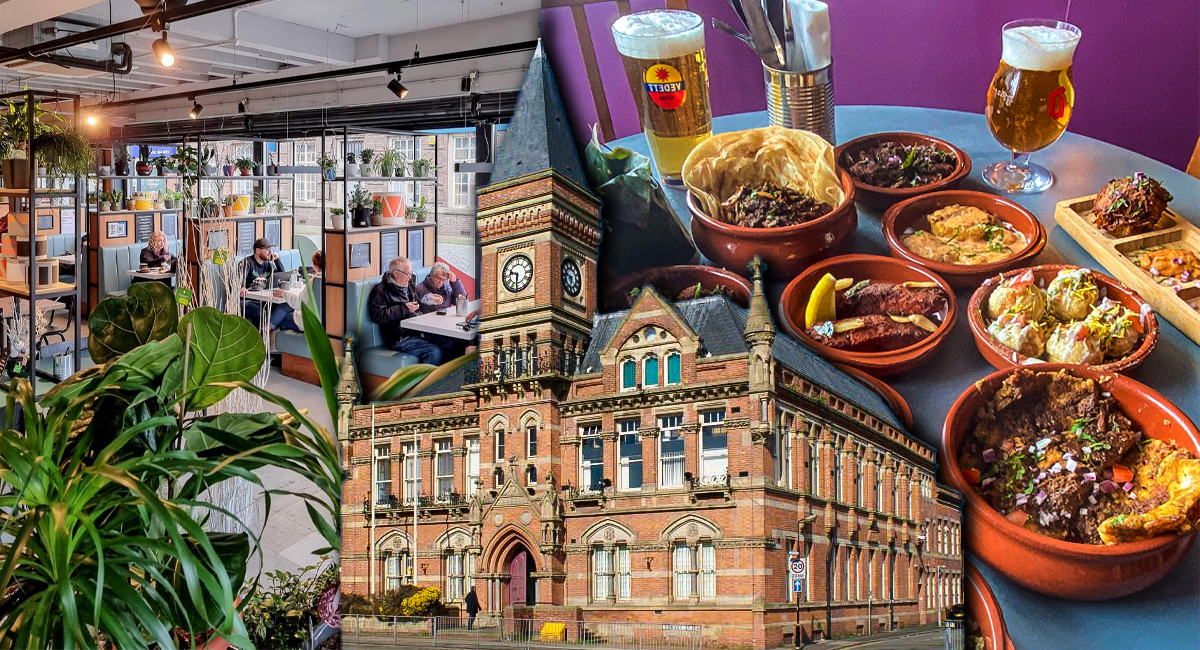 Many would argue that the catalyst for this change was the arrival of the excellent Stretford Food Hall into the famous Arndale (now Mall), and although there is some undeniable truth to the fact that this has kickstarted an uprising of some great establishments – there were already plenty there to begin with.

At the end of 2021 the town was named by The Sunday Times as one of the coolest neighbourhoods to invest in, an area that is both desirable and affordable – “attractive to first-time buyers and young families, who also like the six Ofsted-outstanding primary schools.”

In fact, back in the 19th century Stretford was an agricultural village, known locally as ‘Porkhampton’ due to the huge number of pigs that were produced here for the Manchester market.

It was also an extensive farming area, producing more than 500 tonnes of vegetables each week and becoming known as ‘The Garden of Lancashire‘ by many.

A highly fashionable place to live back in the late 19th – early 20th centuries, Stretford benefitted from a prevailing south-westerly wind which would keep the area clear of the city’s pollution. 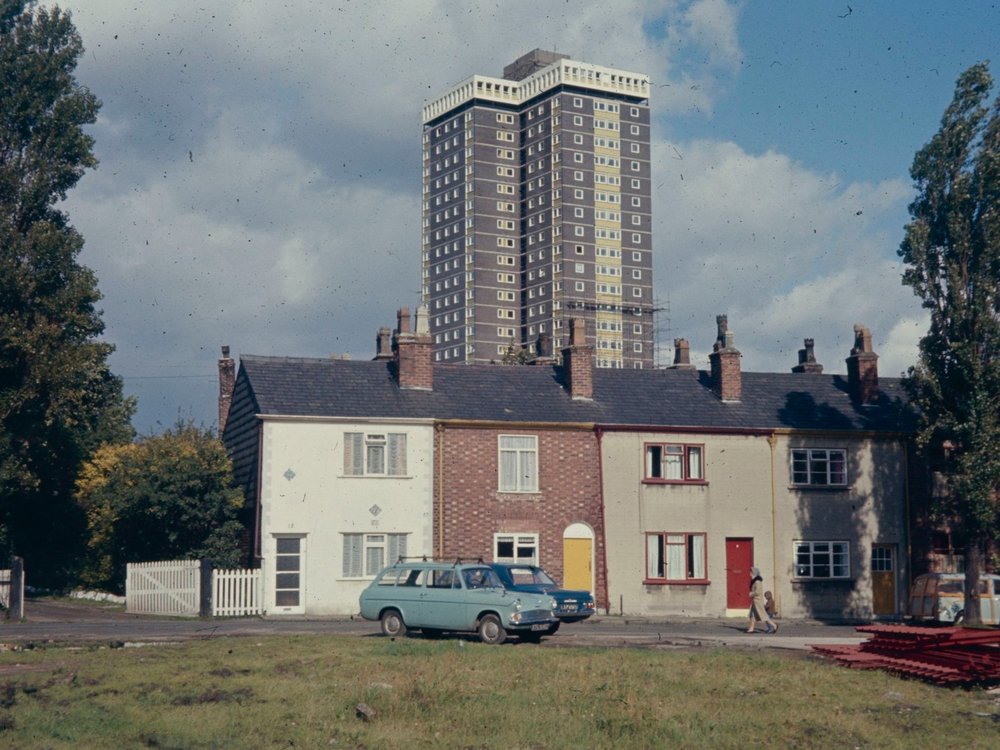 With the arrival of the Manchester Ship Canal, and Trafford Park Industrial Estate, Stretford grew exponentially – home to workers who grafted making Rolls-Royce Merlin engines for the Spitfire and Lancaster during WWII.

Unfortunately, being so close to such factories, Stretford suffered heavy bombing during the conflict, and the post-war period saw the further demolition of slum housing, and the arrival of the aforementioned Stretford Arndale, as well as the famous Stretford House – once Manchester’s tallest building and housing block.

Recent years, after a prolonged period of decline in the area, have seen developers Bruntwood team up with Trafford Council to revitalise and renovate the ‘centre’ of Stretford, with plans to create new public spaces, re-instate the historic King Street high street and improve the areas down on the canal which have been neglected for years. 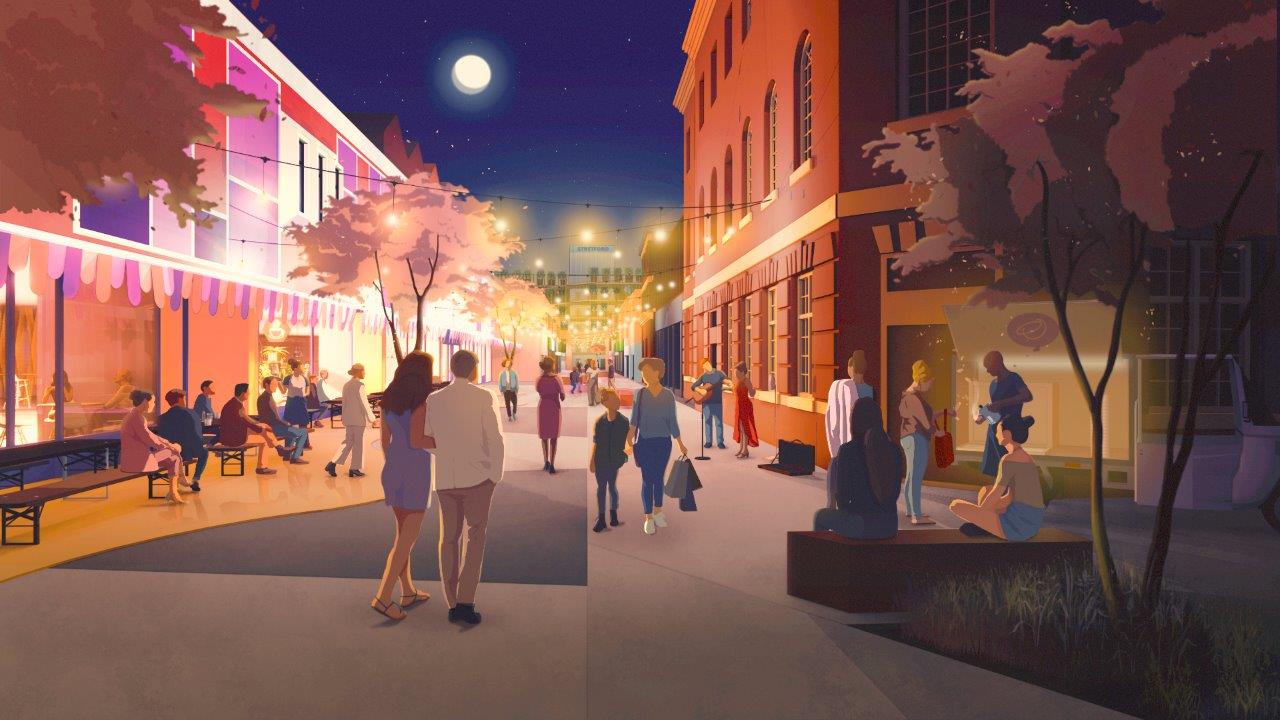 As such, the promise of increased renovation and capital into the area has brought with it a heightened interest in hospitality and leisure, with a bunch of exciting new bars and restaurants flooding to the area in the last couple of years, and plenty more to come.

There are further proposals to provide up to 800 homes around Stretford Mall, St Matthews Church and Lacy Street car park, which will include affordable housing, plus the creation of new green space, including a ‘Central Park’ in the heart of the town centre. 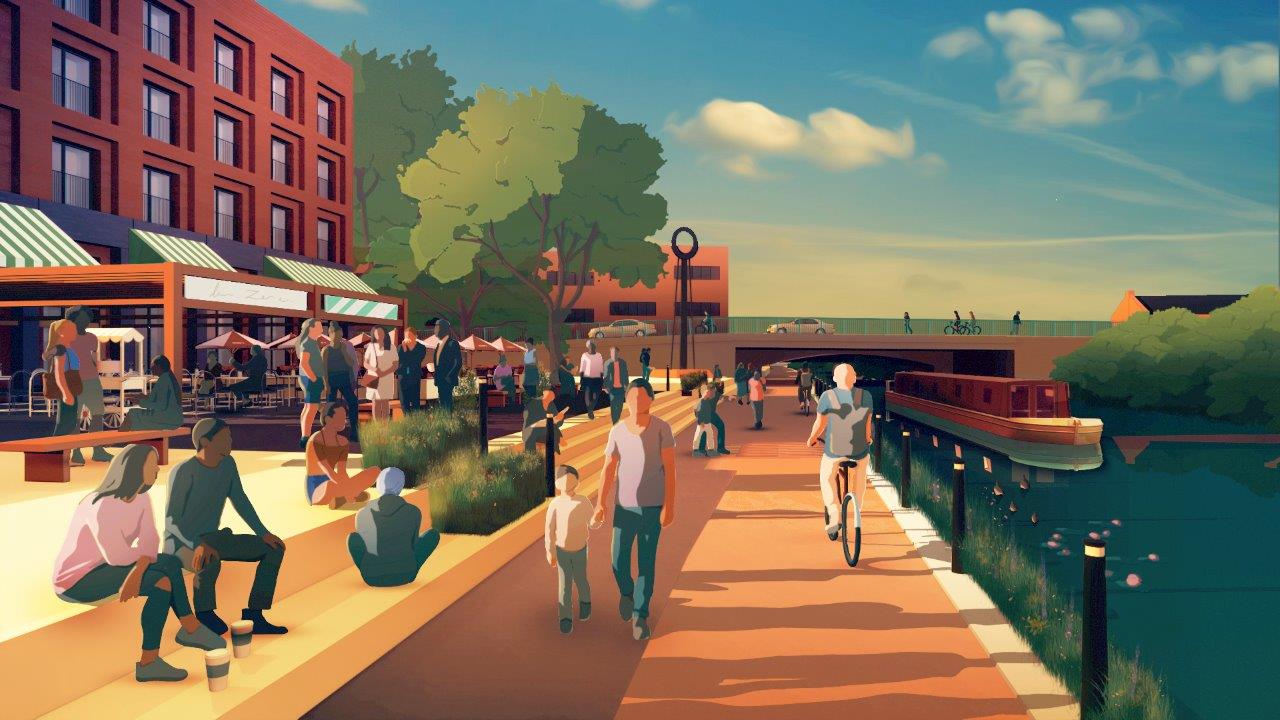 A new covered Market Hall is also planned, which will create a home for retailers and eateries, bar areas and outdoor seating to boost the local evening economy, spilling out into a new south-facing community space, which will feature a covered shopping area aimed at local independent businesses. 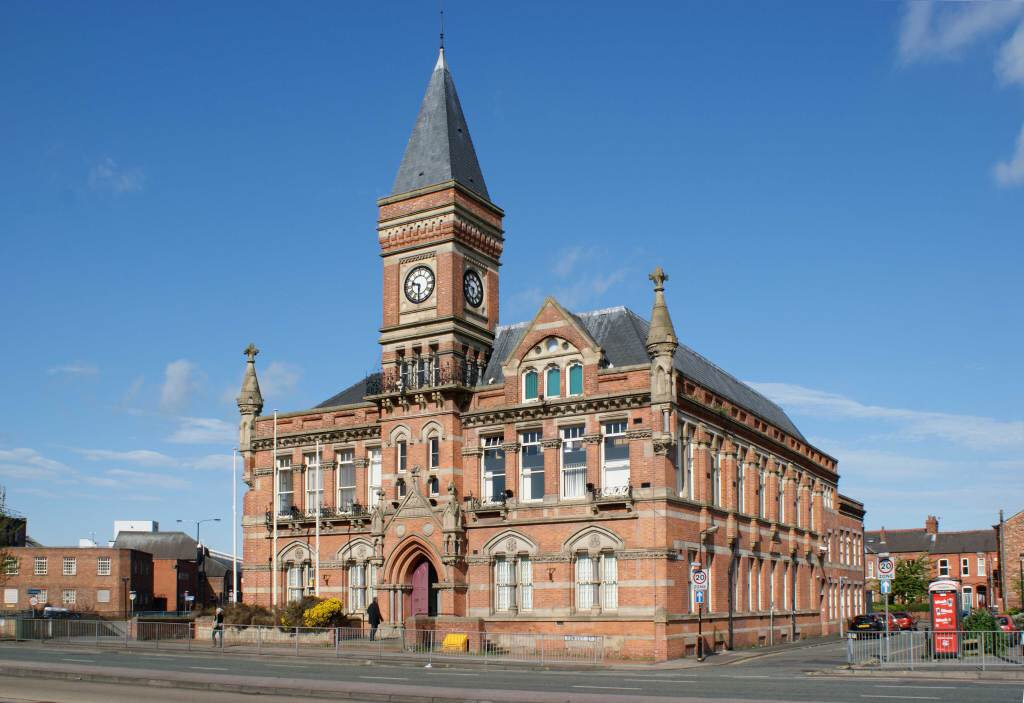 Stretford Public Hall
A community owned and run Grade II listed hub, Stretford Public Hall went through a huge renovation and unveiled their stunning ballroom last year – which is home to an array of different events throughout the week. There’s all kinds of stuff happening including markets, live music, cinema screenings, yoga, art exhibitions, life drawing, dance classes and more. Check out their website for listings…

What’s On at Stretford Public Hall 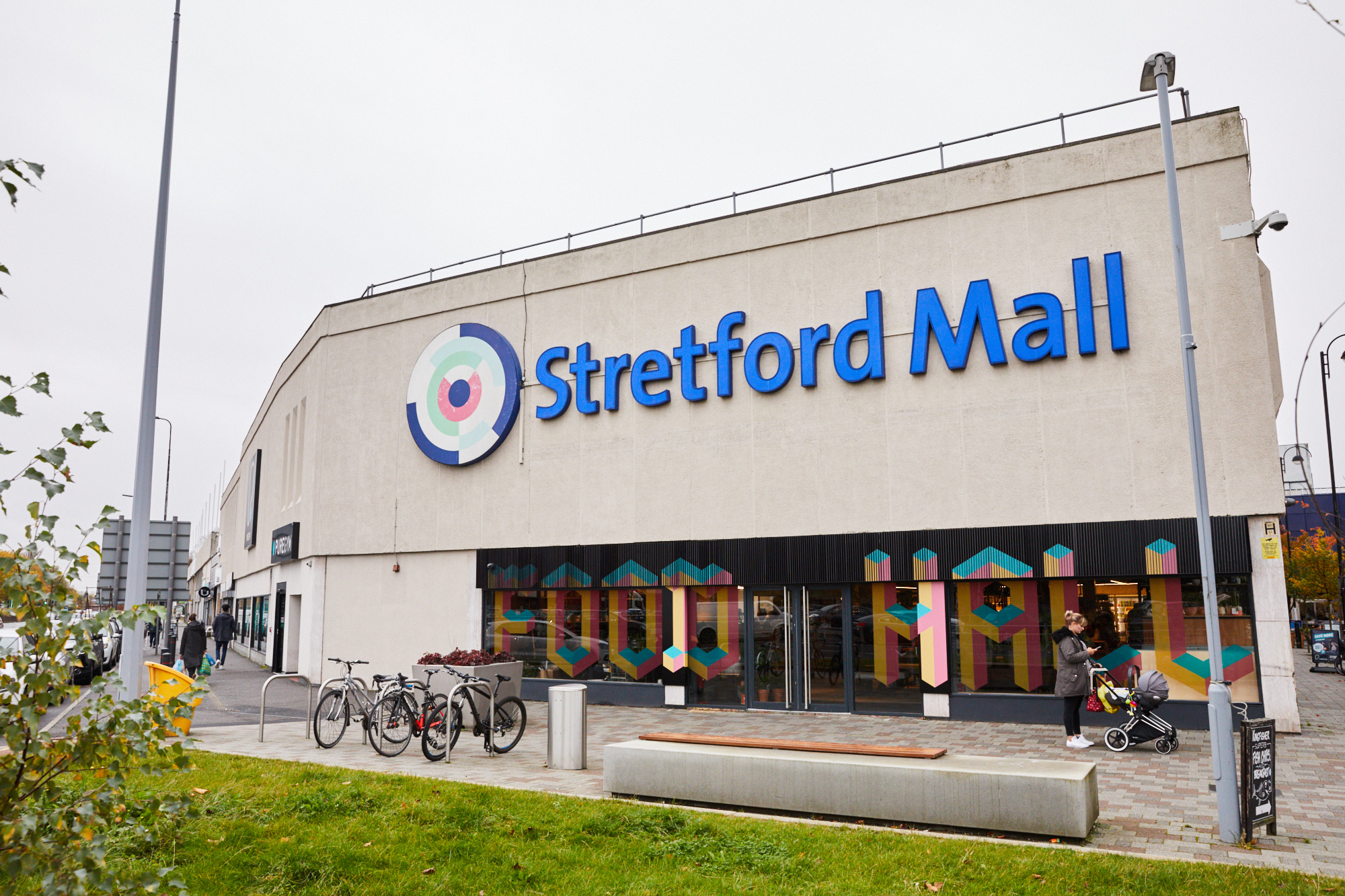 Stretford Mall
The infamous Stretford Mall, once known as the Stretford Arndale – well, it’s not going to be around much longer as it’ll be transformed into a brand-new high street. They’re essentially taking the roof off of it and making it accessible at all times, which will hopefully bring some much-needed bars and restaurants into the area. As of now there’s not much to see or do in here, except visit the excellent Reel Around the Fountain record shop and buy some chicken nuggets in Heron Foods. 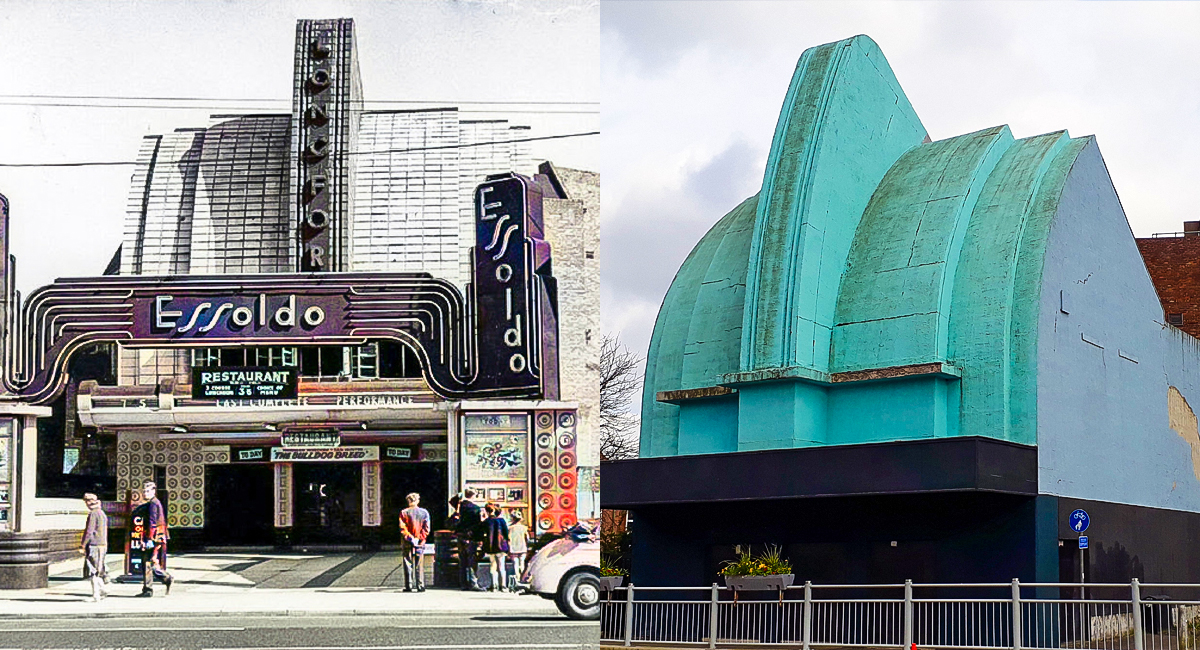 The Essoldo Cinema
Now a rather sorry looking shell of it’s former glory, the Essoldo Cinema was once a jewel in Stretford’s entertainment crown, but after closing as a cinema in the 70s it was then turned into a bingo hall and has now remained closed for a couple of decades. Community groups are looking to get Trafford Council to issue a Compulsory Purchase Order to get hold of it and do something exciting with it. So watch this space for developments. 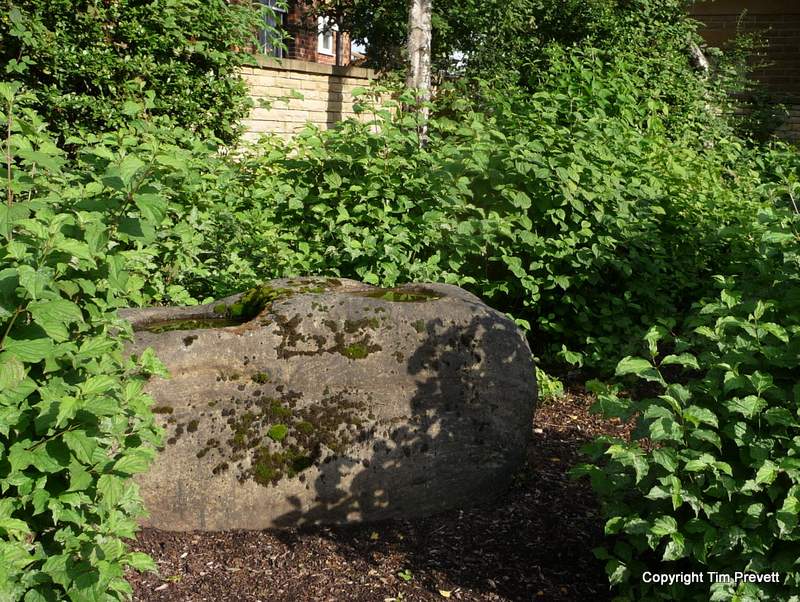 The Stretford Great Stone
A big bloody rock that’s pretty famous and sits proudly outside the entrance to Gorse Hill Park. There’s loads of legends and stories associated with the stone, including one which says that it was thrown to Stretford by a giant, and the cavities on the top are the imprints of his hand. This is, of course, absolute rubbish, but it’s a better story than just acknowledging that it was left over from a glacial retreat during the Ice Age. 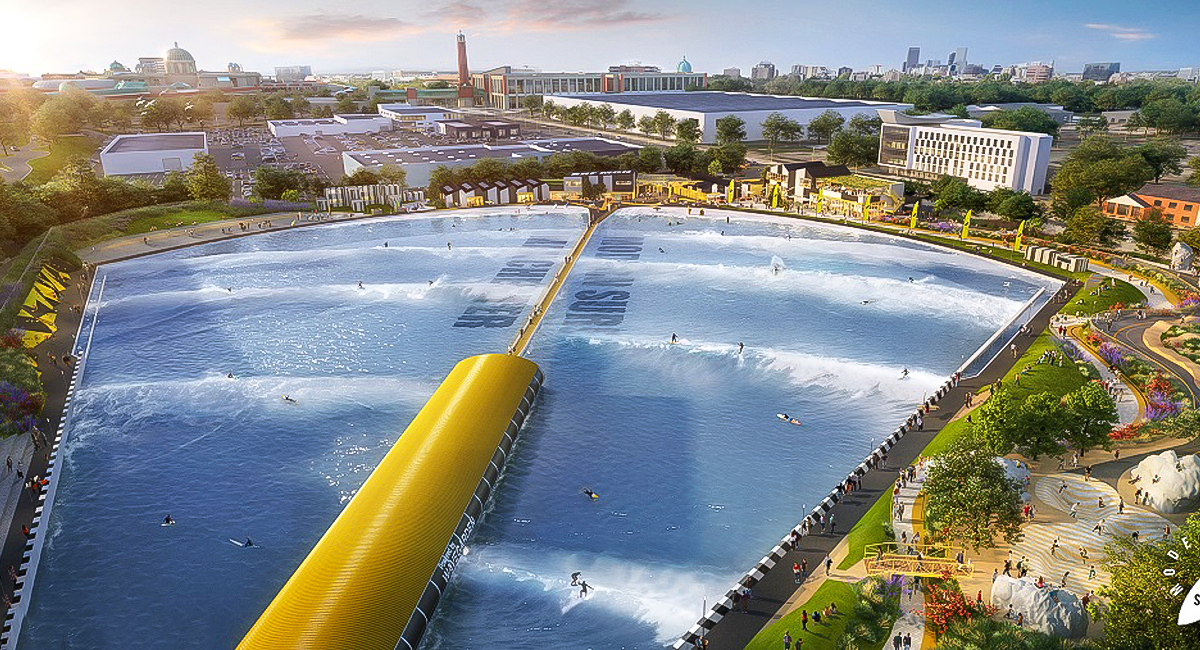 The Trafford Centre
This is less of an endorsement for the Trafford Centre itself and more of an advertisement for the area, as the next decade will see the arrival of some pretty special attractions that’ll make Stretford an entertainment powerhouse. Alongside the skiing slope, Legoland and the SeaLife Centre, in the coming years the area will become home to a ‘World Class’ Surfing Lagoon as well as a £250m Water Park. 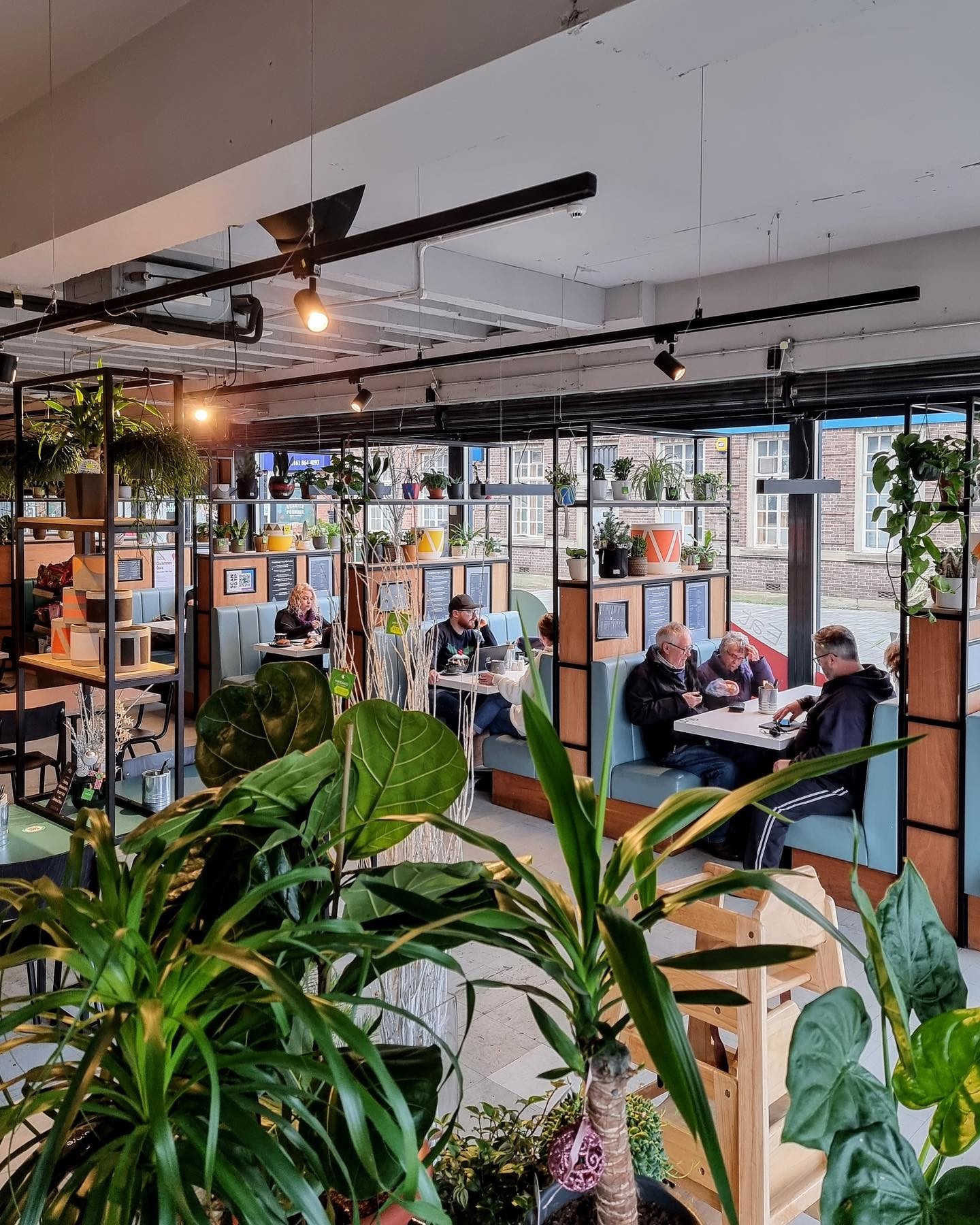 Stretford Food Hall
You can’t talk about Stretford nowadays without mentioning the excellent Food Hall, the place that many people attribute as the catalyst for the current regeneration of the area, and somewhere which offers people the very best of everything under one roof. This place is mega, with a mini supermarket, plant shop, events space, bar, cafe and the food hall itself, home to up to four independent food vendors that rotate regularly. It gets really busy on the weekends, and they do a cracking pint of Manchester Union in here. 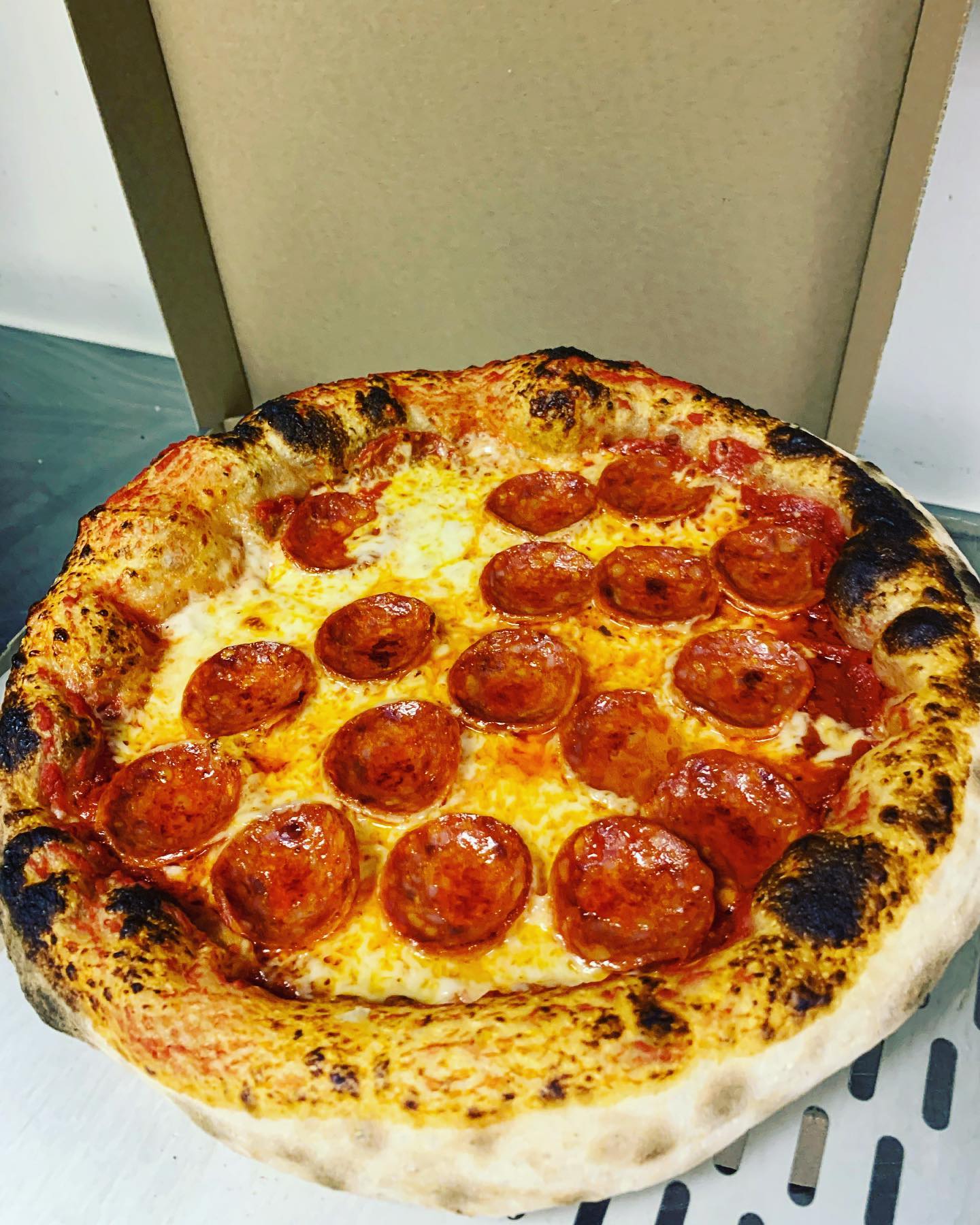 Bakehouse32
Another relatively new offering in Stretford comes in the form of Bakehouse 32, a New York pizza and bagel joint right on Chester Road. Massively popular during lockdown, they found themselves selling around 150 pizzas every night, and once they could open properly, they extended their menu to include some rather impressive old school New York style bagels. These pizzas are MEGA, and they even have a dedicated breakfast menu available on the weekends from 10am. 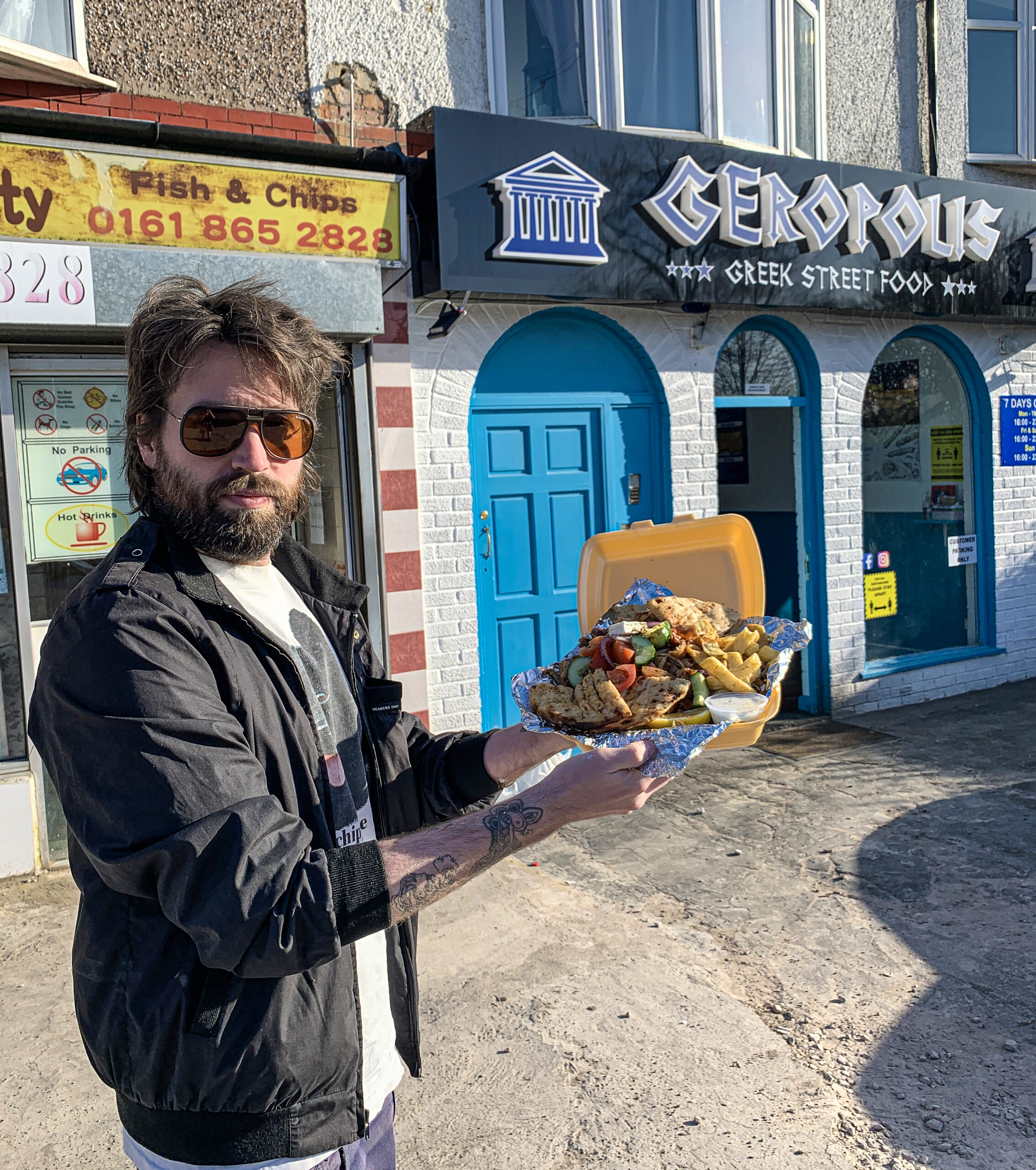 Geropolis
A relative newcomer to the area and a takeaway spot that straddles the boundaries between Stretford, Firswood and Gorse Hill with aplomb. People come from far and wide to try their outstanding Greek gyros and street food. Alongside the classic gyros and kebabs is a small but impressive offering of mains, from Souvlaki Chicken to Biftekia Tiri: a unique delicacy of minced beef and lamb skewers stuffed with cheese and topped with salad, tzatziki, chips and pita breads. 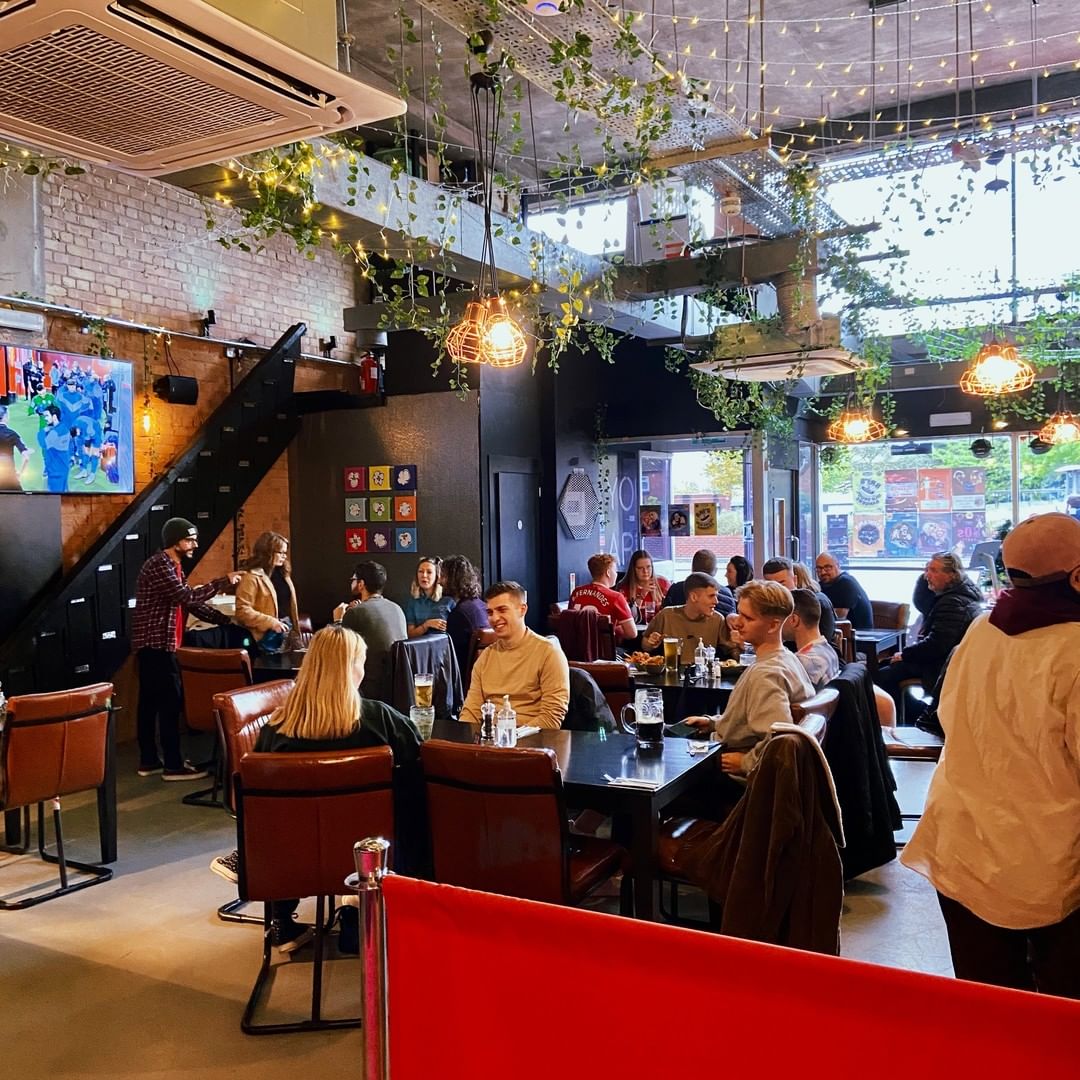 The Hive
A bar that offers up a sometimes overwhelming amount of events, with something happening in here pretty much every single night of the week. There’s comedy nights, open mic nights, live music, pub quizzes and bottomless brunch – plus loads more. I was walking past here last week and there was an art event on that looked great, and on a weekend it can get nice and rowdy. It’s a top night out and a great addition to Stretford. 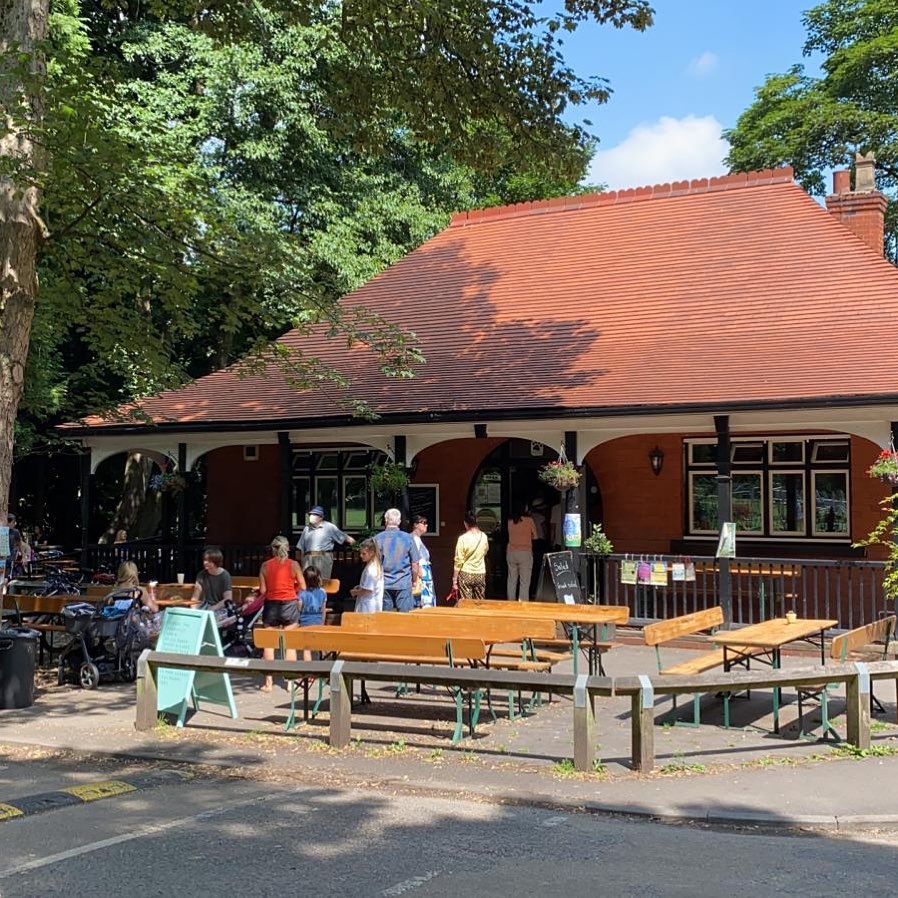 Longford Cafe
Longford Park, once home to philanthropist John Dalton and now home to Longford Cafe – which serves up fresh home-made food every single day, alongside exceptional coffee, cakes and baked goods. Owner Phil Howells came to run the Cafe entirely through a rather odd set of circumstances, many of which revolve around his experience of operating the innovative Caffeine & Co in the city centre, and one where he and his wife found themselves baking sourdough bread every morning under a tree in the middle of the park. Since then it’s become a firm local favourite, and their mix of daily hot specials, fantastic coffee and a philosophy that everything is made from scratch make this one of the best cafe’s in the entire city – and a true Stretford gem. 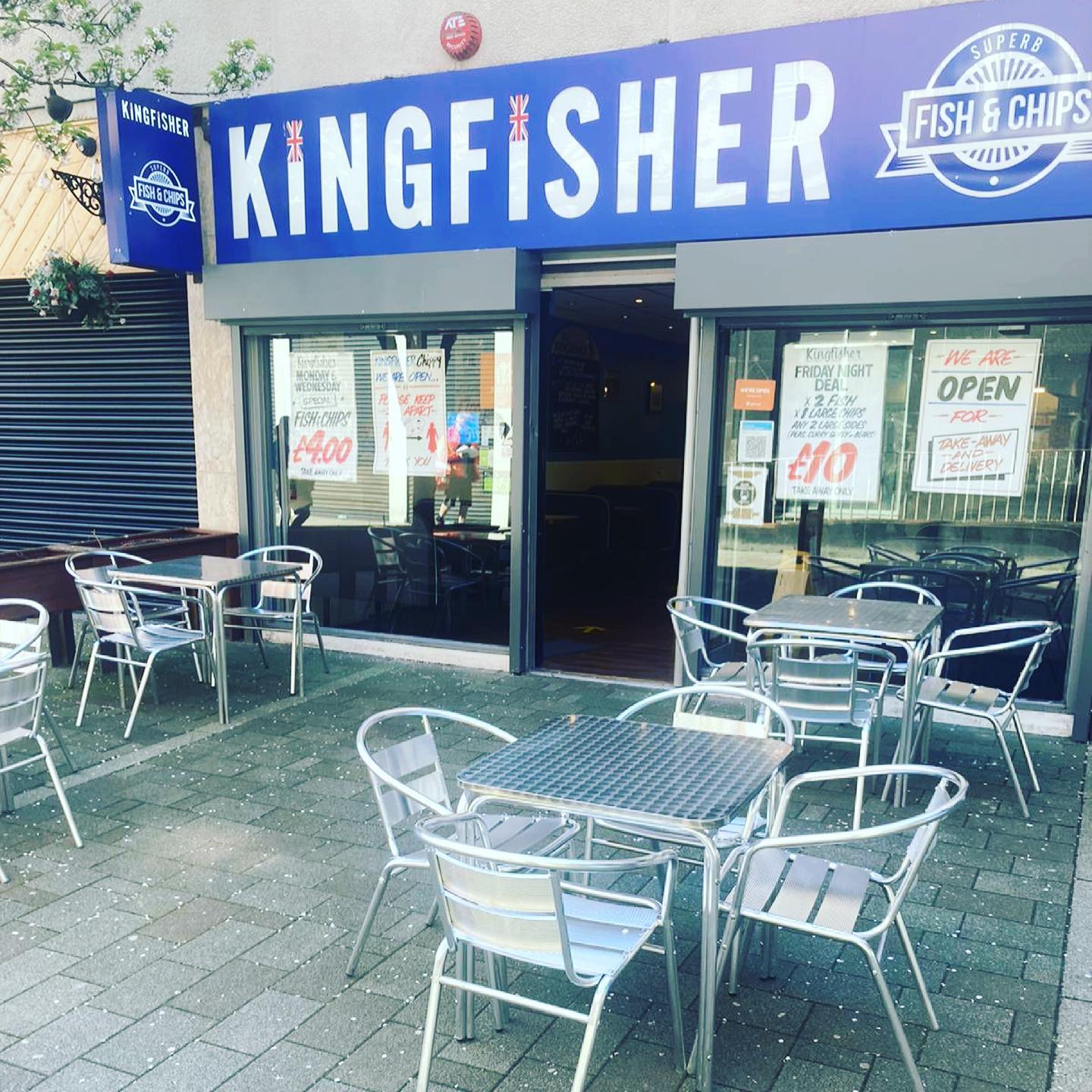 Kingfisher Fish & Chips
Probably the oldest establishment on this list is Kingfisher Fish & Chips, family owned and run for 20 years and a true Stretford institution. This place is always packed to the rafters, primarily because it’s easily one of the best chippies in Greater Manchester, with very attractive price tags to boot. It’s also a great spot for a banging Full English Breakfast in the morning on a weekend. 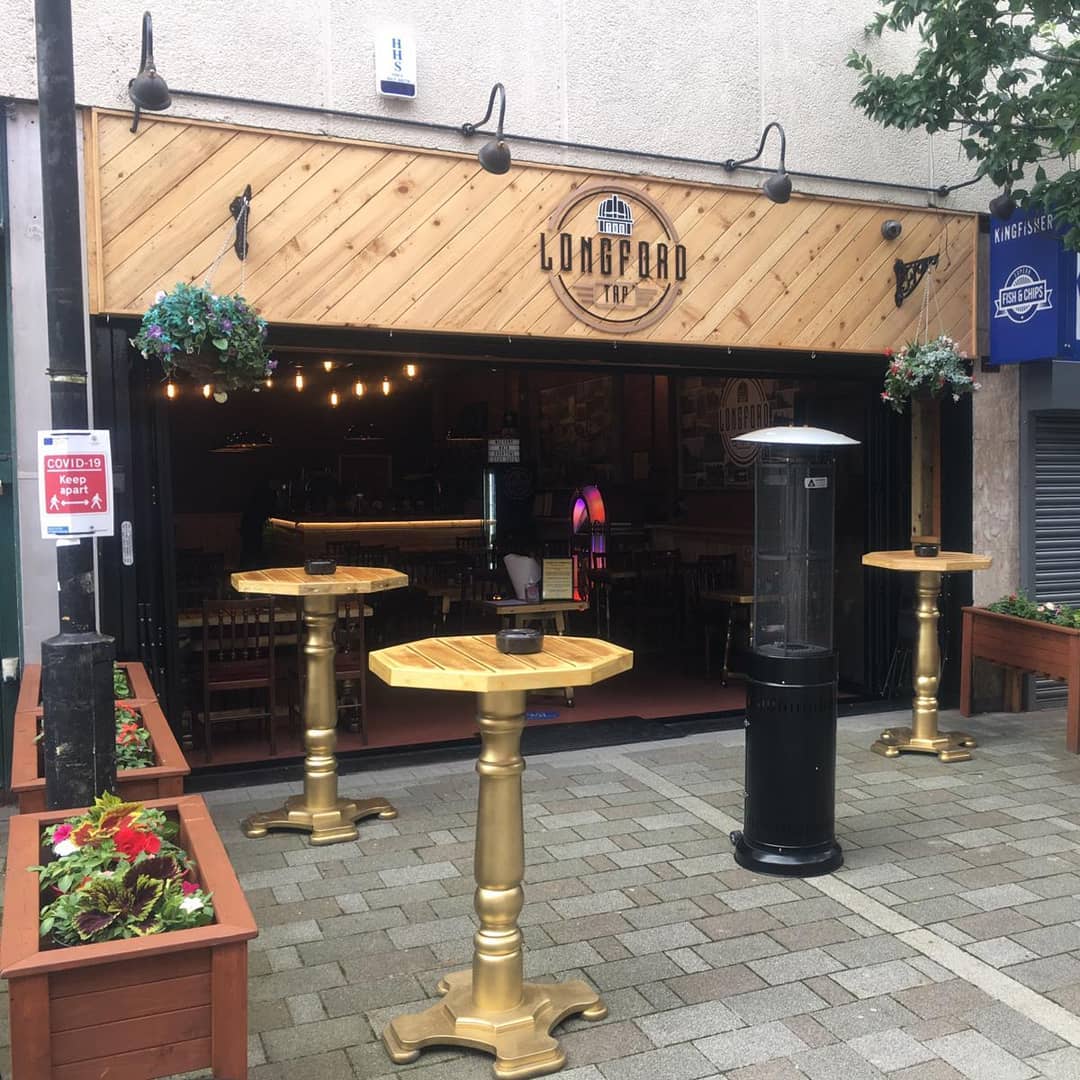 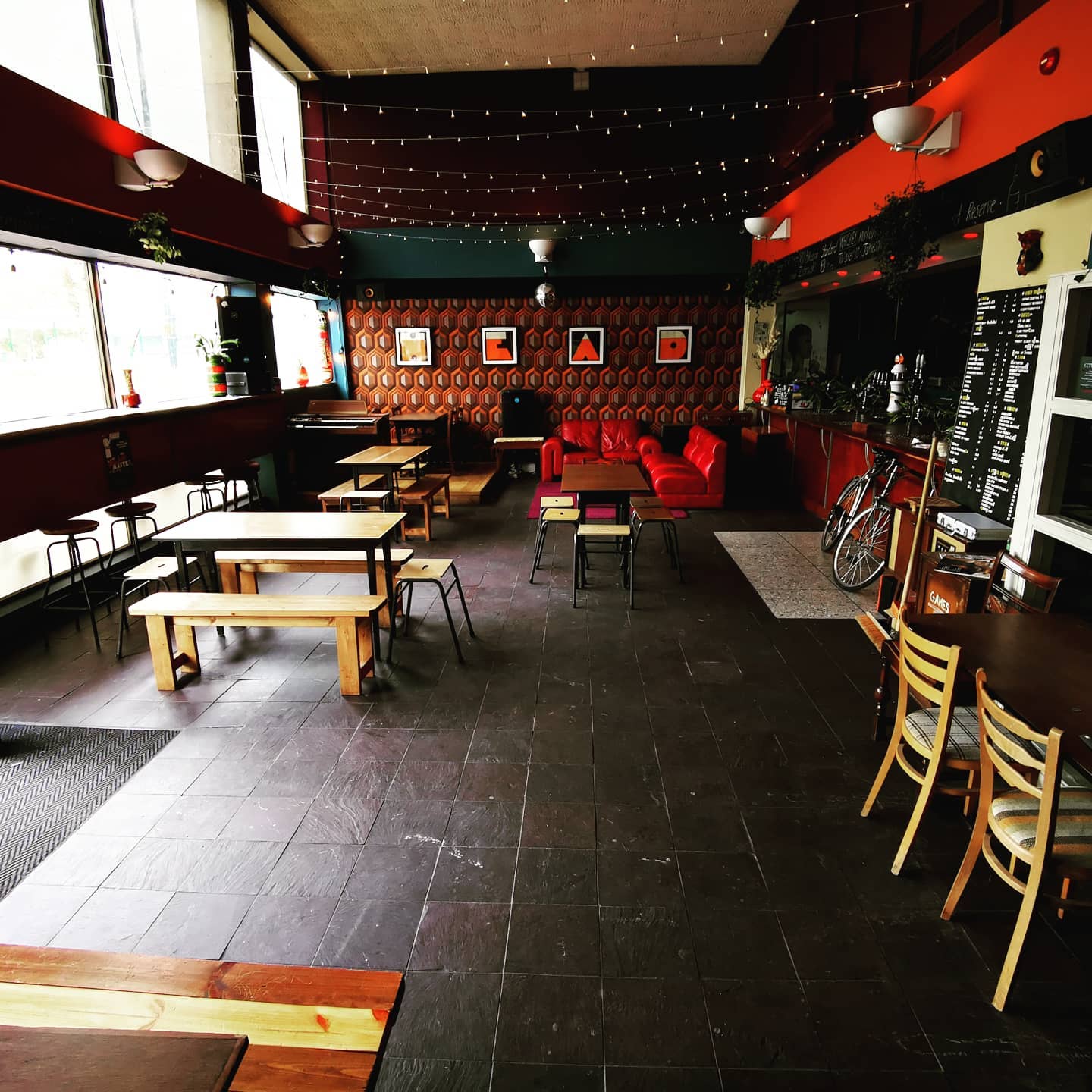 HEAD
A fantastic bar that’s got a massive list of loyal supporters and regulars, drawn to the top tunes, unparalleled range of beers, and an eclectic setup of little nooks filled with table football, pool tables, retro consoles and super comfy sofas. They also host a really good quiz in here on Wednesdays – but if you’re good at them – stay away because I want to win it. 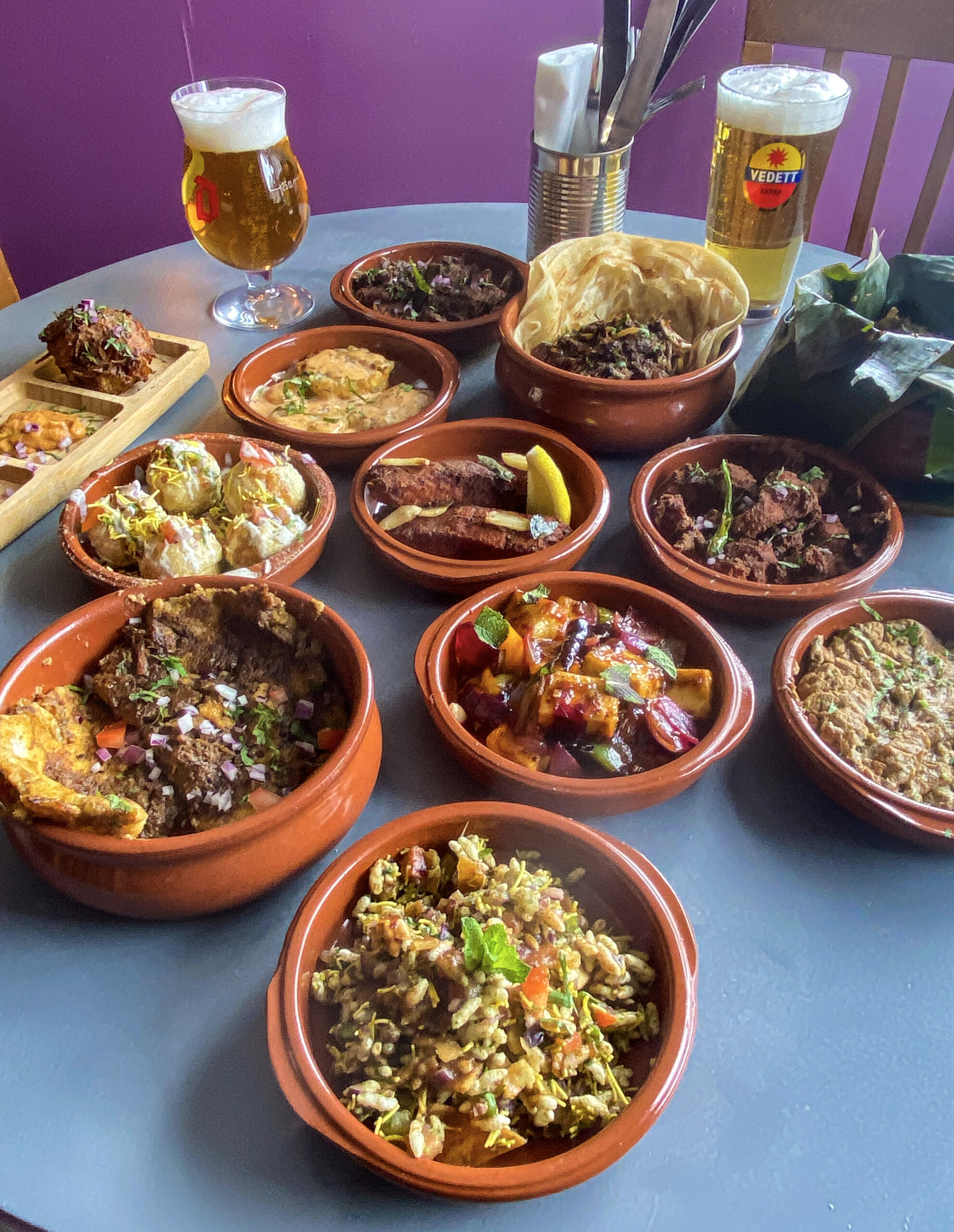 BrewChimp & Indian Social Club
The newest arrivals to Stretford is BrewChimp and their Indian Social Club upstairs, both of which opened in the summer of 2021 and became massive hits with the locals ever since. The restaurant upstairs is run by friends Raj & Vijay, they’ve created an Indian ‘tapas’ concept using street food dishes, many of which you won’t have seen over here in the UK before. The fellas are keen to point out that Stretford is the only place in the UK where you’ll find some of the dishes, plucked from the streets of Tamil Nadu and re-created right here above a laundrette in this fantastic restaurant. 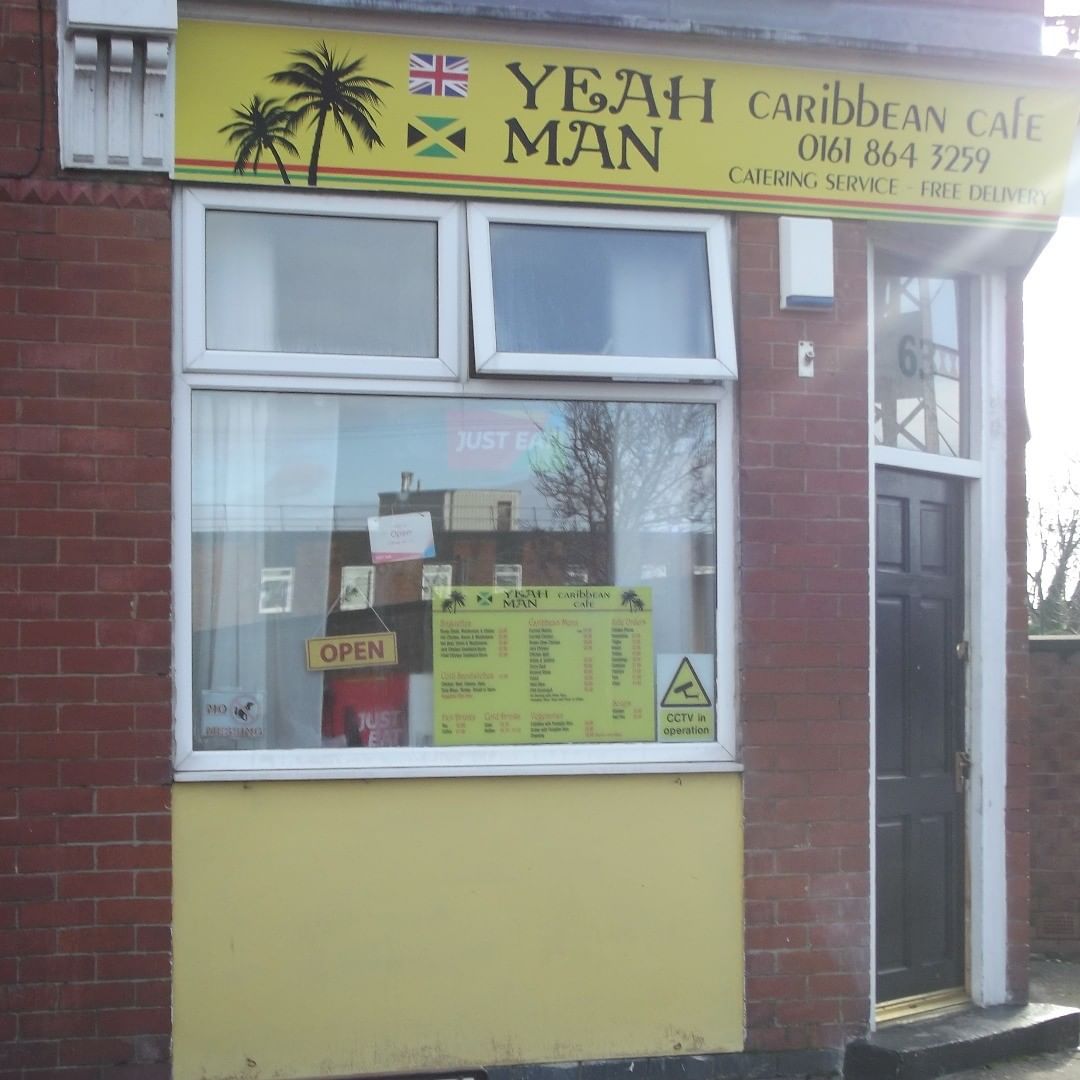 Yeah Man Caribbean Cafe
We were recommended to visit Yeah Man Caribbean Cafe by the lads over at EatMCR. Nestled at the end of a seemingly endless terraced houses in Gorse Hill, Yeah Man is now a Stretford institution, run with enthusiasm and supreme grilling skills by Jamie for the last 12 years. The menu features a whole host of Caribbean classics, from Curry Mutton to Oxtail and the classic Jerk Chicken, as well as one of the very best Chicken Splits in the city – a delicacy of flame-grilled chicken thigh in a dumpling topped with salad cream.