9 of the Best Chinese Restaurants in Manchester

Getting a Chinese in the early 90’s consisted of heading the local chippy on Waverley Street, ordering a Meat and Potato Pie with half rice, half chips and gravy and putting a bit of Soy Sauce on the top.

More recently the city became overrun with mass-producing Chinese buffet restaurants offering all-you-can eat grub for around £3.25, providing you with enough calories to feed a family of 6 while you drank copious pints of Tsingtao.

Nowadays though the city is awash with some truly excellent Chinese restaurants, offering everything from the strictly traditional, right down to the ultra-modern…

Tattu
If you’ve never been to Tattu before then I should probably warn you – it’s nothing like the other restaurants on this list. In fact, it’s a slight stretch placing it on this list in the first place – although yes, they do Chinese food, Tattu is so much more. Since opening a couple of years back, this stunning space has been doing a rip roaring trade serving up fantastically elaborate cocktails, some truly stunning dishes and providing the perfect backdrop for a quiet romantic evening or a cracking Saturday night – all with an oriental twist. The food is modern Chinese/Asian fusion so you should expect Chinese but also Japanese influences. It’s hard to explain – just go.

Yang Sing
Absolute institution in the city; Yang Sing has been serving up top-class Chinese nosh since 1977 – way before I was even a twinkle in the milkman’s eye. Not only has this place won more awards than Meryl Streep, there’s tons of authentic services that they offer on top of their fantastic menu. There’s scope for some truly grandiose private events, as well as cookery classes and workshops to work on your wok tossing skills. But ultimately it’s about the food and Yang Sing never fails to disappoint – it’s probably the most authentic gourmet Chinese you can get in town – get their Satay Beef Thins and you’ll never go anywhere else again. Probably.

Lotus Vegetarian Kitchen
If you live down South Manchester way and fancy some Chinese food – you should probably give Lotus Vegetarian Kitchen a try – you won’t regret it. Available for eating in or take away, this quaint place just further down from the Red Lion in Withington can provide your hungry stomach with plenty of juicy Chinese dishes – all of them vegetarian or vegan. There’s quite a few dishes which feature ‘mock meats’ which are pretty good themselves, however Lotus really shines with its veggie and tofu dishes. Like some sort of flavour-magicians they manage to make the usually bland tofu taste like there’s a party in your mouth and all the cool people are invited. Much healthier than getting a Donner Kebab and chips.

Red Chilli
Another restaurant that has seemingly been around for longer than the Great Wall took to build – Red Chilli has two locations – one slap bang in China Town on Portland Street, the other slap bang in StudentsVille on Oxford Road. I’ve only ever been to the one on Portland Street but when my Magic Bus goes past the other one it looks massive – and it’s usually got a fair few people happily scoffing and bantering away in it. The menu is excellent, the prices very reasonable, their salt and pepper wings divine and they once did Deep Fried Ice Cream that I used to impress a girl on a date once. Cheers fellas!

Happy Seasons
An unassuming little entrance in China Town opens up into one of the city’s best and most authentic Chinese Restaurant experiences. Just a quick look as you walk past lets you know exactly what you’re in for – those lovely Peking ducks hanging in the window – always an indication of a proper good Chinese restaurant. Add to this the rave reviews from everyone else I’ve spoken to who has been and it should be high up on your list of places to visit. Although they are pretty commercial when it comes to ordering; they tell me the Sweet & Sour Chicken is fantastic. I’ll check it out as soon as I can.

Ho’s Bakery
This cracking place in China Town has consistently provided the hungry gobs of Manchester with cracking Chinese snacks, cakes and many more sweet, sweet delights for ages now. Proper famous for their phenomenal Honey Buns, they also do some excellent savoury snacks including some lovely Pork Buns which go down a treat during lunch time. You can also buy Moon Cake here which always perplexed me when I lived in China. Imagine a Pork Pie, but instead of a savoury filling it’s a sweet one – sort of like marzipan, but not. I’m not very good at explaining it. Tell you what, try one, send me a better description and I’ll write it down here.

Middle Kingdom
I once ended up in here on a boozy Sunday afternoon with 6 other people and it honestly provided me with the most vivid recollection of eating in China than I’ve ever had anywhere else in the UK. Not only is the menu as varied and as eclectic as you’d find anywhere in China, but the food is cooked in a much more authentic and less ‘Western’ way – so you’ll be getting the proper stuff here. The service was also impeccable, which is not usually the case when a bunch of half-cut idiots descend upon your establishment and start ordering Chicken Feet and spilling the rice. It’s very popular with visiting Chinese nationals so that’s surely got to tell you something.

Wings
Favourite Chinese restaurant of pretty much every footballer who has ever played in or even thought about the city of Manchester, Wings has gained a reputation as a bit of a star haunt and somewhere you can get cracking food with the potential that you’ll be sitting next to Paul Parker or Ian Dowie. In that respect you could say that’s it’s like the Chinese San Carlo. And like San Carlo I’ve never had a bad meal in here – granted I’ve only ever been in once but I was impressed with the range of dishes – with a menu probably longer than War & Peace; the top notch Dim Sum are a must.

Sweet Mandarin
Basically the go-to place in the Northern Quarter for anyone looking to get their mouth round a Spring Roll and suck on some noodles. Run by three sisters, Sweet Mandarin has weathered the relentless on-going changes in the NQ, continuing to provide authentic Chinese food at a pretty decent price. I remember a fair few years back they were even featured on The F Word, a TV show by everyone’s favourite craggy-faced chef Gordon Ramsey. They were competing in the final 5 for the Best Local Chinese restaurant in the UK and only went and bloody won it. Clearly Gordon was impressed, which is not an easy task – he probably doesn’t even like Vimto – the miserable sod.

An afternoon in Worsley 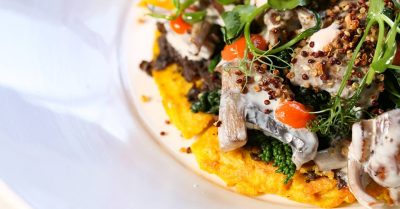