Anyone who follows us on Twitter will probably have noticed we’ve got a bit of a soft spot for Bundobust, and we’re not the only ones, Guardian writer Jay Rayner loves the place too – don’t let all that put you off though. I mean craft beers and Indian snacks, what could go wrong?

The best thing on the menu at Bundobust is hands down the paneer kebab, but on our visit there was also a special with that succulent meaty cheese, the paneer shimlamirch. It was nicely rich and saucey and probably the closest thing to a curry I’ve eaten here. Bear in mind this is a street food menu rather than standard curries, and more interesting for it.

One of my favourite food experiences when I visited India was hunting down chole bhature in Delhi, where it has become the most popular dish with locals. After crossing about ten lanes of various forms of traffic, from carts to cars and horses to push bikes, all punctuated with slow drying cow pats, we sat down in the streetside restaurant to watch chefs toss the bhature breads in to a wok of boiling oil. They puffed up immediately to around the size of a football before being removed and served with rich chickpea stew. To get the oppertunity to eat some of the brilliant but lesser known food from India with a crisp craft beer is a proper treat.

Another ubiquitous snack that hasn’t really made it big over here yet is vada pav, essentially a potato burger, they sell them in McDonalds over there in place of beef. A crispy mashed potato patty nicely spiced with chutneys and popped in a slightly sweet brioche bun, I doubt these guys will be replacing beefburgers in the British diet any time soon but I’d probably take one over a chip butty.

Something a little more common to the curry house came next, the onion and cauliflower bhajis, they’re a little on the heavy side but as with most things you’ll try, expertly spiced and seasoned.

Speaking of which I loved the okra fries, a cacophony of sharp salty flavours with far more than their fair share of crunch and heat, they’d add something to any Indian meal. Another nice side arrived in the form of Bhel puri, essentially a pot of bombay mix perked up with fresh coriander and tart tamarind. The perfect partner to a few scoops of Berliner Pilsner, it’s almost hard to believe some of these dishes weren’t designed with beer in mind, though in truth finding a decent pint in India isn’t always the easiest task – thankfully there’s loads to choose from in Bundobust.

There are plenty of reasons to keep coming back here, but I reckon the paneer tikka kebabs are enough on their own. They’re probably almost enough to make a meat eater jealous at a BBQ, seemingly simple in their construction but properly spot on. Mushroom, pepper and marinated paneer all grilled just right then splattered liberally with mint sauce and hot chuntey, everything is perfectly in balance.

Beer and snacks out the way, it’s fair to say Bundobust do a decent sideline in dessert and digestifs too. We chomped down a couple of ice kulfis whilst waiting for a stiff drink – they’re light and creamy but stuffed with the sweet aromas of cardomom and all spice too. You might not pick this place out for a cocktail, but the negroni was well proportioned, not too syrupy but definitely packing a thump. There are few Indian twists on traditional drinks and the cinnamon old fashioned works well, the spice adding a subtle layer of flavour.

If you haven’t been here yet add this to the “What Are You Waiting For?” pile

The French by Adam Reid: Review 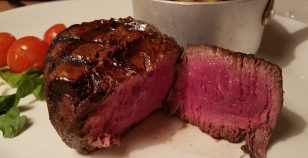