When I first moved to Manchester, the Northern Quarter wasn't much more than what you could find on Oldham Street, fast forward fifteen years and that road isn't quite the city's most vibrant place anymore.

Recently though, there are signs of a bit of a revival. Underground bar, Behind Closed Doors, has brought a bit of debauchery back to the strip and just last week another new boozy venue, The Patron, opened it’s doors for the first time.

In the summer, Fress set up shop in what used to be an old newsagents, aiming to shake up the food scene on the street, and by all accounts it’s mission accomplished, so we dropped in to see what all the fuss was about.

There can’t be many better ways to kick off an evening than with a haul of Whitebait. Like a trawl of a mouthful on Blue Planet, but deep fried, a bowl of those crisp, whole little fish dipped in gloopy, garlicky mayo is the perfect finger food.

Staying in the sea, our Spicy Tiger Prawns were delicious too, soaked in a sauce of chorizo butter with just the right amount of chilli heat. Succulent chunks of the Spanish sausage added paprika and tender bite to the dish too, whilst a couple of slices of sourdough were ideal for mopping up what’s left.

Our other starter brought together two of the best food groups, fried and cheese, yet somehow still managed to seem a bit wholesome. The Courgette and Feta Fritter was punchier than expected with the pungent citrusy bitterness of sheep’s cheese, then was all brought back to earth gently with the delicate flowery sweetness of watermelon cubes. The sweetcorn relish seemed a bit unnecessary, but then I’d say that about those little kernels in general to be fair.

Pork Belly is always difficult to ignore on a menu, and especially amongst the confidently concise number of options at Fress. I wouldn’t suggest you miss it either, the crisp, fatty, rolled slice of pig was gluttonously glutinous. Nectarous, honey roasted root veg with treacle-sweet balsamic sauce and rich parmesan mash completed a dish with autumnal indulgence written all over it.

Our other main came in the form of a seriously well-proportioned bit of Free Range Chicken. The yogurt and harissa marinated bird had invitingly charred skin but moist flesh and there was loads of it, I couldn’t even finish the dish, which was a bit disappointing as it was impressive stuff. The light middle eastern aromas of the poultry were supported nicely by a sweet date puree in the accompanying quinoa and barley salad. An appetising, hearty and simple dish, very well executed, this is the sort of cooking you could eat every night of the week.

If I’m honest, to my disappointment, dessert felt like a bit of an after thought. In fairness the selection of cakes makes more sense for day time dining, but after some genuinely impressive food I would have liked to have seen freshly made puddings. We picked a Peanut Butter Cronut that was a bit stodgy and a slightly dry truffle-topped cake. Both were a bit uninspiring.

It’s great to see Oldham Street coming back to life again with new venues opening, and especially those with a bit of character like Fress. The interior is a sort of contemporary take on Victorian design and it lends the place real personality. The restaurant has a charming assurance about itself, from the decor through to the menu, where attention to detail achieves some really stand out food. 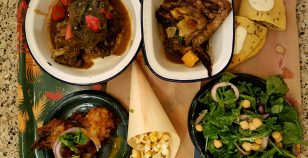