Brand new Italian eatery Tre Ciccio opened its doors to the Altrincham public this week and we went down to check out their menu which hopes to bring a taste of a neighbourhood village trattoria to the town.

I think it’s fair to say that Altrincham in recent years has transformed from end-of-the-tramline ghost town to bustling ‘place to be’ complete with its own fantastic food and drink market, dynamic restaurant scene and skyrocketing house prices.

The introduction of a new restaurant to the area therefore may be a daunting prospect, especially considering the almost saturated availability of quality eateries and fantastic dishes. With the likes of Sugo, Portas, The Con Club and the aforementioned Market all banging out quality fare, it may feel like there’s not much space for anything else, let alone another slice of Italy.

We headed down to Tre Ciccio on a dank Shrove Tuesday to sample their traditional Italian menu focusing on wood fired pizzas and their Pollo Arristi e Patate – or roast chicken and potatoes to us non-Italian speakers.

The space itself is fantastic – managing to instantly transport you to somewhere in the middle of Italy where they speak with their hands and olives grow from every wall crevice. You’re immediately greeted with a scorching brick wood pizza oven, loads of authentic Italian ingredients and a lovely bit of brick art that Michelangelo himself would have been proud of.

A quick spring down the steps and you’re greeted with the main restaurant which feels intimate but not too tight. The space is surprisingly light and airy – with a large terrace which will be perfect for sipping an Aperol on when the sun decides to pop it’s head out of the Manchester clouds.

Anyway, less waffle – more food. We started off with the Antipasto di Tre Ciccio (£18.95) which is pretty much an Italian restaurant staple for me – a big platter of meats and cheeses while I settle myself and have a bit of wine. It’s fair to say that this particular platter was indeed big, with plenty enough for 2 people.

It came adorned with salami, bresaola, prosciutto as well as mozzarella, gorgonzola and the odd chunk of parmesan. In addition, there was enough foliage to please Alan Titchmarsh, alongside some fantastic pickled veg which worked exceptionally well with the creamy cheeses and salty meats.

We also ordered Rotolini (£5.95); little baked pizza bites of heaven stuffed with cured ham, cheese, tomato & basil because they sounded amazing, and there’s no way anyone can say no to pizza balls.

If these balls were an indication of how good the pizza was to be for mains, then we were in for a treat. Each bite was astonishingly flavoured, with a sharp cheesy bite working perfectly with the salty ham. Oh, and the dough. The dough. Oh my word the dough. Be sure to order these beauties if you come though, they are not to be missed.

Starters done and we had followed our lovely server’s advice and gone for a pizza and a plate of their roast chicken and potatoes – because of course, we had to see what all of the fuss was about.

The two dishes arrived and it was instantly clear that we had ordered too much. Even with our large big-boy appetites we would probably have struggled with the chicken dish alone, never mind the gloriously large, good-looking pizza that sat on our plate like a cheesy beacon of gluttony.

Made in their dedicated (and huge) wood oven upstairs, I must say that the pizzas at Tre Ciccio are phenomenal and I’m rather confident in saying it was probably one of the best I’ve tasted in the city in years. The fantastic dough is both chewy and crispy, thin but with substance and topped with an array of fresh ingredients that worked so well that I’m still drooling thinking about it right now.

We went for the Salsiccia e Friarielli (£10.50), Tuscan sausage flavoured with fennel, Italian wild broccoli, cheese & chilli and I can quite honestly say that it was one of the best pizzas I’ve ever had. It certainly beats anything I’ve had in Altrincham, and yes that includes Honest Crust.

So, they’ve got the pizzas boxed off. Well done – they’re brilliant. What about the chicken & potatoes? We ordered a sharing plate of Pollo alla Cacciatora (£26.95), which is chicken & potatoes slow-cooked with tomatoes, olives, mushrooms & rosemary. Inspired by restaurants in southern Italy serving ‘Pollo Scucchito’, the chicken comes from Johnson & Swarbrick’s in Goosnargh, Lancashire and you can certainly taste the quality.

Coated in their ‘secret’ marinade, the chicken was exceptionally tasty and juicy – there wasn’t a dry spot in sight. Coupled with the crispy, fluffy potatoes – you’ve got yourself a massive meal for 2 that hits all the right spots. Our particular dish was sprinkled liberally with some juicy olives which were bursting with flavour and worked exceptionally well with the meat.

By this point we were feeling ready to sit in an olive grove somewhere and take a considerable nap, but with it being Shrove Tuesday, we had pancakes to eat back home. With that in mind, we didn’t broach the dessert menu but you can expect such Italian classics Panna Cotta, Tiramisu and a selection of Gelato.

Opening up a new gaff anywhere is always a daunting and risky venture, but with the added pressures of being located in Altrincham, one would think Tre Ciccio have an uphill battle on their hands to make an impact.

They do however, have some truly stunning dishes on offer, as well as pizzas that would make even the pickiest and most patriotic Italian take note so I’m positive they will be here to stay for a long time. 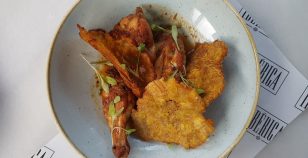 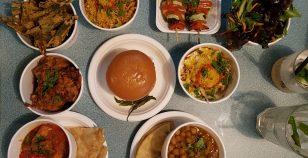 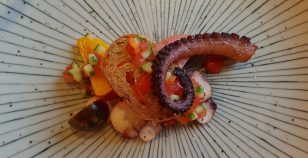