One88 Bring a Magnificent Brunch to Whitefield: Review

So unless you’ve been in a bunker for a few years, you’ll know full well that brunch is the Big Thing with a capital B and T at the moment. Understandably so - you get to drink before a normal socially acceptable time and eat all of the best food groups en masse.

Manchester already has its remarkable places for any kind of brunch you can imagine, but look no further than Whitefield, for hands-down one of the best you’ll ever put past your lips at One88. As an added bonus, it’s across the street from the famous Slattery patisserie, so you can really have a foodie weekend without even trying too hard.

Before I tell you in GREAT detail about the delicious new brunch menu, let me describe the place itself. Few restaurants can describe themselves as ‘unique casual dining’ and actually mean it, but One88 achieves just that. A nice Manchester soundtrack (you know the one – Oasis, Stone Roses, Happy Mondays etc) and customers of varying ages. The couple next to me with their infant child told me they come every Saturday morning and it only gets better, and they didn’t laugh at me for ordering the entire menu (review purposes only…)

I started with a Bloody Mary and a Latte before ordering the Steak and Eggs, Toasted Crumpet with Asparagus & Chilli Fried Eggs, Homemade Beans on Toast and Eggs Florentine. Usually, I need a Bloody Mary to explode my brain into action and make me sweat out all my shame from the night before, but this one didn’t need to do that because it was so refreshing – an aspect I’ve never really found before with the cocktail. Hats off to them for that! The latte was equally tasty and presented beautifully, definitely something I love about a good cup o’ Joe.

For anyone that knows me, they know I will eat absolutely anything put in front of me and in great quantities (note: two scorpions in Thailand yum), but I absolutely refuse beans – can’t stand the buggers.

So why should you order Homemade Beans on Toast? Because they might have actually managed to change my mind and wean me on to beans… or at the very least into making my own beans the exact same way they do at One88. They were absolutely delicious, served in a tangy tomato sauce and combined with chorizo creating a dish that was more reminiscent of a Spanish patatas bravas dish than anything you’d find in a tin at the supermarket. They were bloody gorgeous!

Steak and Eggs has to be one of my most favourite things ever and they did not disappoint at One88. The steak was on point, perfectly cooked and juicy, (nice and bloody, just how I like it) and served with a delicious béarnaise sauce drizzled all over. The presentation itself made me feel like I’d walked into a top Michelin star restaurant, but for a fraction of the price.

You can’t really go wrong with Eggs Florentine, but One88 manage to go the opposite way and go right with it. A huge slab of toasted bloomer is liberally topped with spinach and a perfect poached egg before being smothered in some of the creamiest hollandaise sauce I’ve ever had in my mouth. It’s a classic and One88 have nailed it.

Now for the unexpected star of the show – Crumpets with Egg and Asparagus. At no point would I have thought they would make such a great combination, but of course they absolutely did. Although to be fair, I did once have hummus and sliced chorizo on crumpets during a particularly culturally confused year, but that proved to be absolutely brilliant too. The same could be said about One88’s egg and asparagus concoction, the perfect poached egg oozing and seeping into the sponge-like crumpet was as satisfying as it was delicious.

My only issue with a brunch at One88 is that you’ll struggle to pick just one thing. So you’ll just have order 10 things and I’ll hear no complaints! 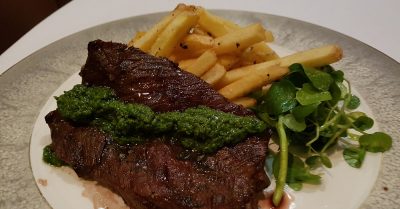 The Lowry Hotel wins January with three courses for £15.95