Arguably the most opulent of Manchester's many fine Indian restaurants is going back to its roots this month to showcase food from of one the country's most hypnotically bustling metropolises.

Mumbai’s fascinating food culture has many influences, from its trading past that’s brought Europe breads as well as Persian influences from closer proximities, to the street food borne out of the necessity to get working masses fed. Asha’s exciting new menu takes a snapshot of the lot and tries to encapsulate the city with six exciting new dishes, so we popped in to try them.

Where else to start than with the iconic Vada Pav? These little potato pattie burgers are so ubiquitous in India that even McDonald’s knock out a poor imitation in their eateries over there. Perhaps unsurprisingly, much of the world’s most enticing food has been created out of the need to fill hungry bellies cheaply, quickly and hopefully tastily.

Tart tamarind sauce and cool coriander alongside a hot, dry chilli and garlic crumb then the crunch of fried batter bits. Asha’s have reimagined the famous street food snack as sliders but these smack of hot crisp fat and spice just as much as the real thing.

Another factor on the food scene of Mumbai is its proximity to the sea, next we tried the Tawa Machli, white fish fried golden with a succulent rub. One thing that always impresses about Asha’s is the quality of the produce, I think they’re steps ahead of the competition when it comes to the meat and seafood sourced, and this beautiful fillets of fish certainly support that argument.

Vegetarian cuisine is of course massive important in Mumbai though, none more so than Pav Bhaji, a buttery veg curry served with more of those white bread rolls. On the menu here Kohlapuri mixed vegetables, which sit in a similarly thick, pureed tomato based curry.

Next came chicken curry served with hot fritters for dipping. The Combidi Vada uses a local interpretation of garam masala with cardamom and the sweet nuttiness of toasted fenugreek seeds.

Baked rice dishes likely came to India from the Middle East and so are much more prevalent on its northern and western fringes such as the Maharashtra state, which Mumbai calls home. The Chicken Berry Biryani celebrates that Parsi influence with more fragrant spice, clove and cumin plus the intriguing tangy burst of fresh cranberry. Tender chicken pieces separated from the bone complete a dish we enjoyed as a side but could quite happily make your main.

Finally, and arguably the main event, we tucked in to Salli Boti a rich, slow-cooked lamb curry. Spiked with the caramel aroma of jaggery and piquancy from a dash of vinegar, the complexity of flavour more than matches up to those gorgeous chunks of gelatinous meat.

The Mumbai Menu is first in a series of localised excursions set to land at Asha’s in the coming months. I’d suggest you book yourself in to experience a little slice of one of India’s most captivating corners while you can.

The French by Adam Reid: Review 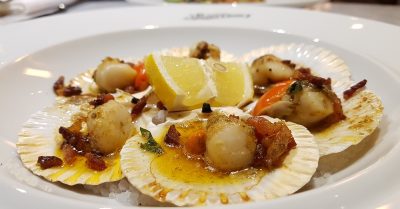