Often forgotten, these beauties can elevate any dish to the upper echelons of greatness... 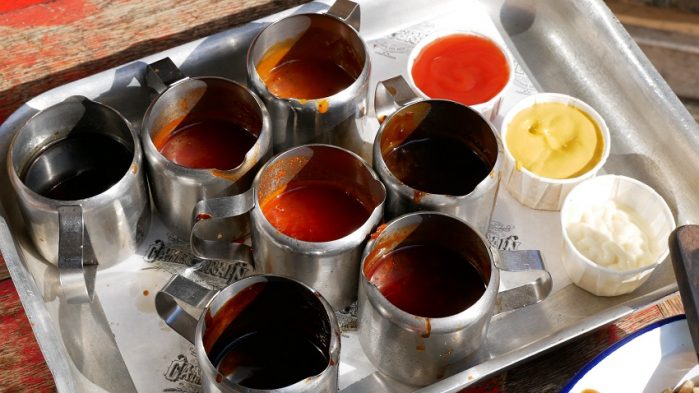 It may seem that the whole food world has gone crazy with dipping this last year, the process of seeing food plonked in a pot of sauce has been almost unavoidable on Instagram – and if I’m being honest – it really does work.

If I see a new sandwich, pizza or even just some standard chips, my first reaction now is to dip it in some gravy, or get a big pot of sauce and pour it all over ’em. It’s absolutely glorious, and the restaurants and eateries of Manchester have stepped up and made some truly wonderful dipping sauces for your pleasure… 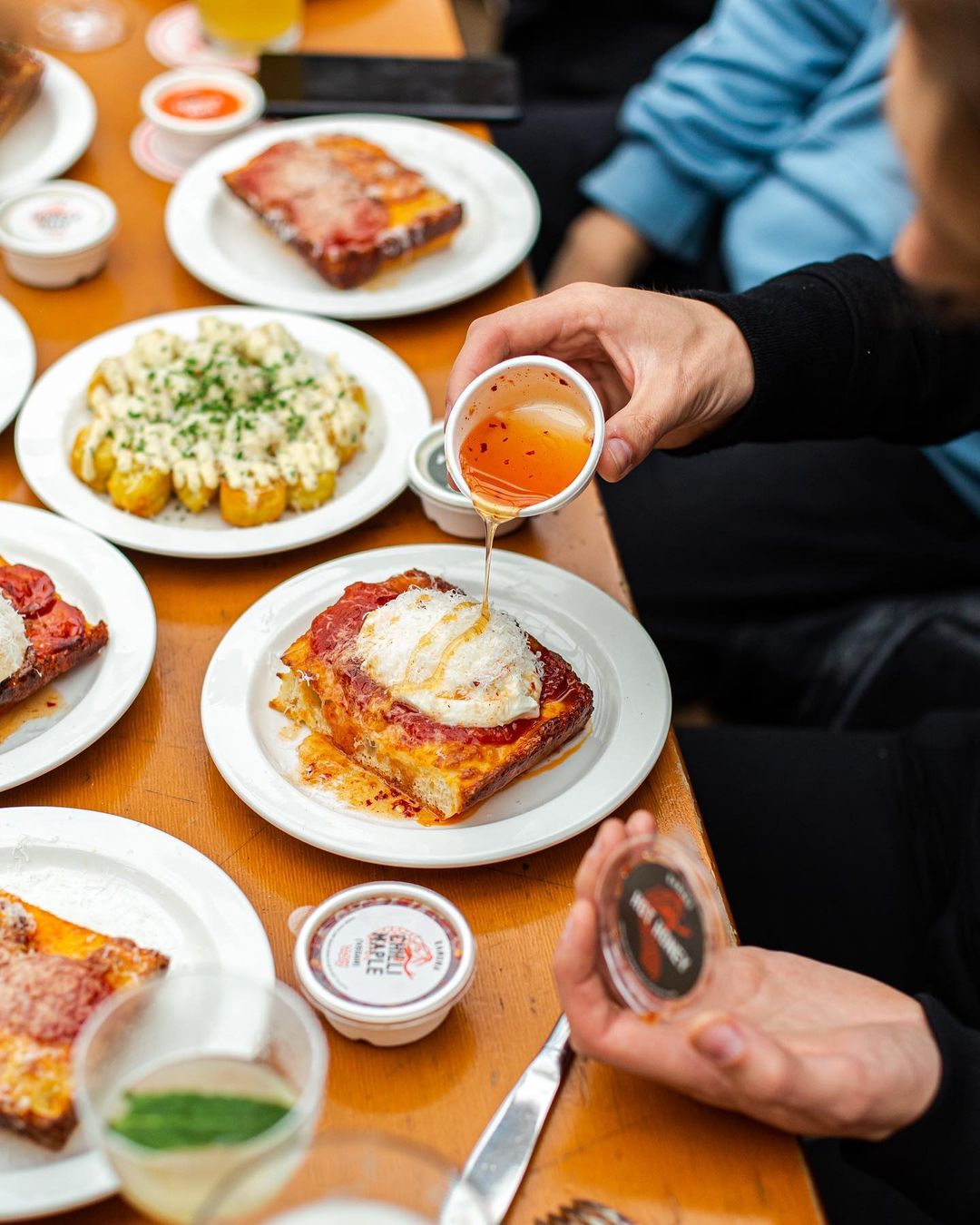 Hot Honey Sauce
Ramona
All of the hard work that has gone into perfecting their pizzas, choosing the perfect cheese, proving the dough, slow-cooking the tomato sauce and most people end up talking about Ramona’s Hot Honey Sauce instead. Such is the sheer power of the ‘DIP’. This stuff is worth a visit to Ramona alone – and is so perfectly matched with a slice of Detroit and a cocktail that it makes the Chuckle Brothers look like sworn enemies. 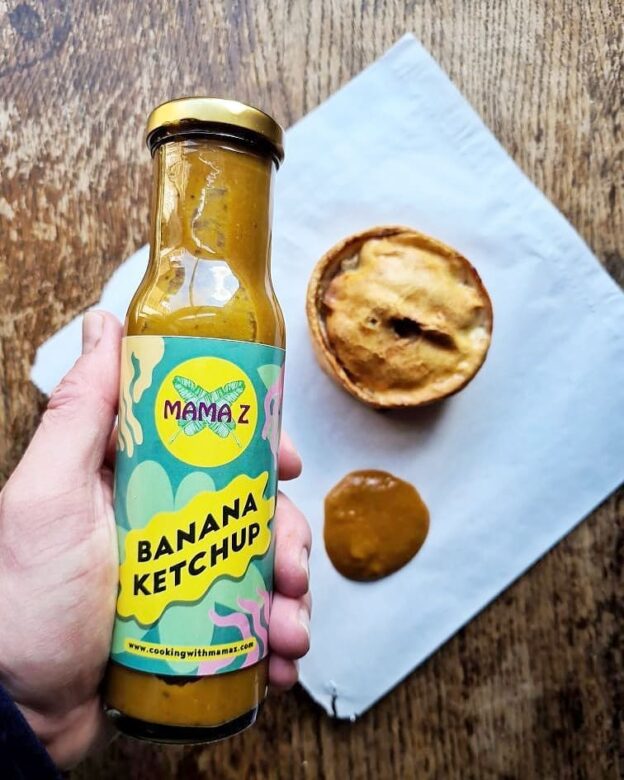 Banana Ketchup
Mama Z
One of the greatest condiments in Manchester, this stuff might even be one of the best in the whole country – a bold statement that I’m willing to stand behind in a court of law. I’ll even go to Strazbourg and shout it from the rooftops, because this Mama Z creation is fucking amazing – and best of all – it works with absolutely EVERYTHING that you throw at it. Buy yourself a bottle now. 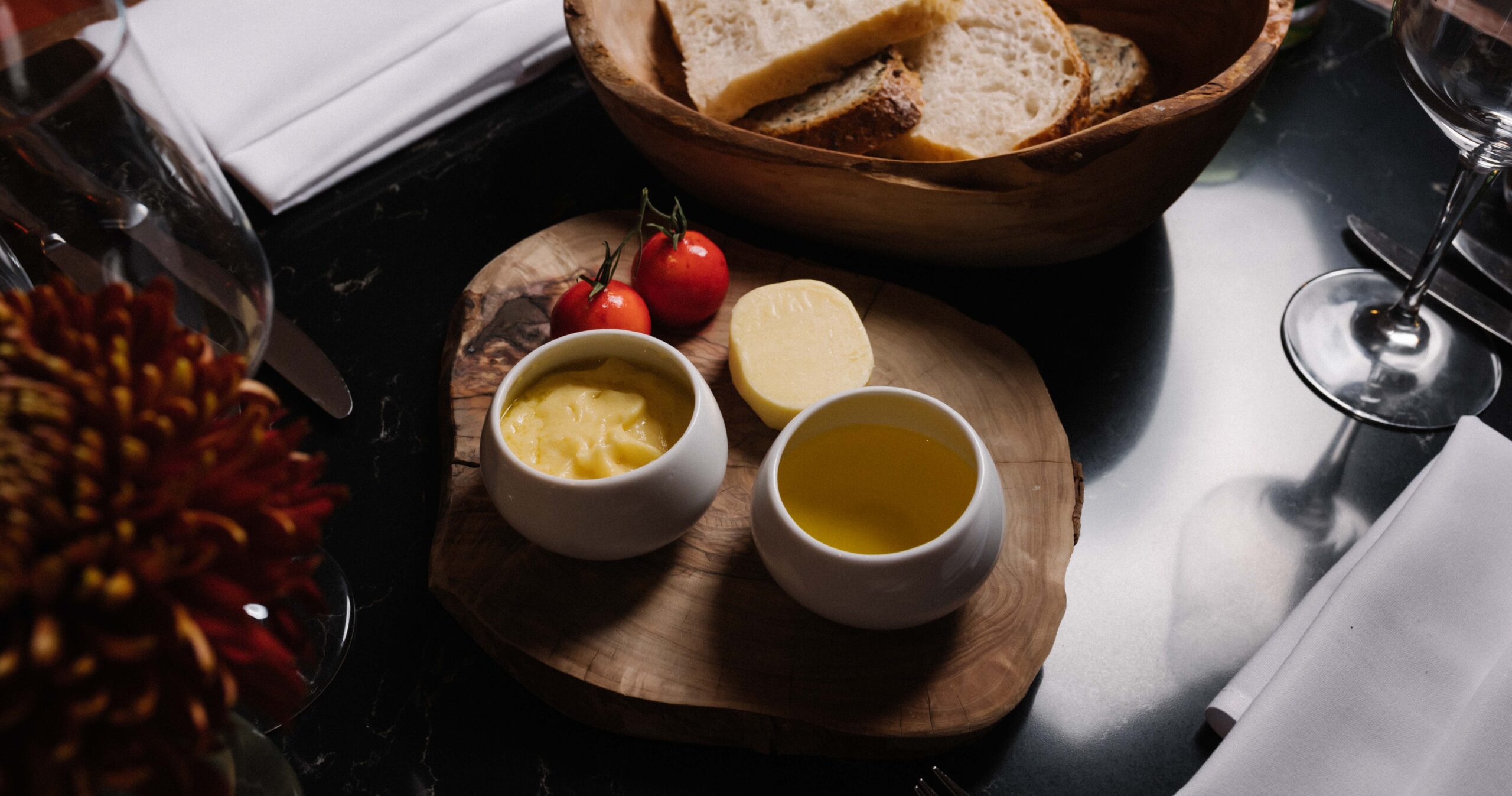 Lancashire Bomb Cheese Custard
The River Restaurant
Now we’re onto the serious stuff. Head Chef Dave Ashton at The River Restaurant has created the ultimate naughty dip – a cheesy ‘custard’ that’s pretty much the greatest thing to dip your food into. Once you’ve finished with your food you’ll find yourself dipping your fingers in there, your tongue and whatever else you can find, before quickly ordering some more and starting all over again. If I could have a bath in this, preferably in their Presidential Suite, I would do. 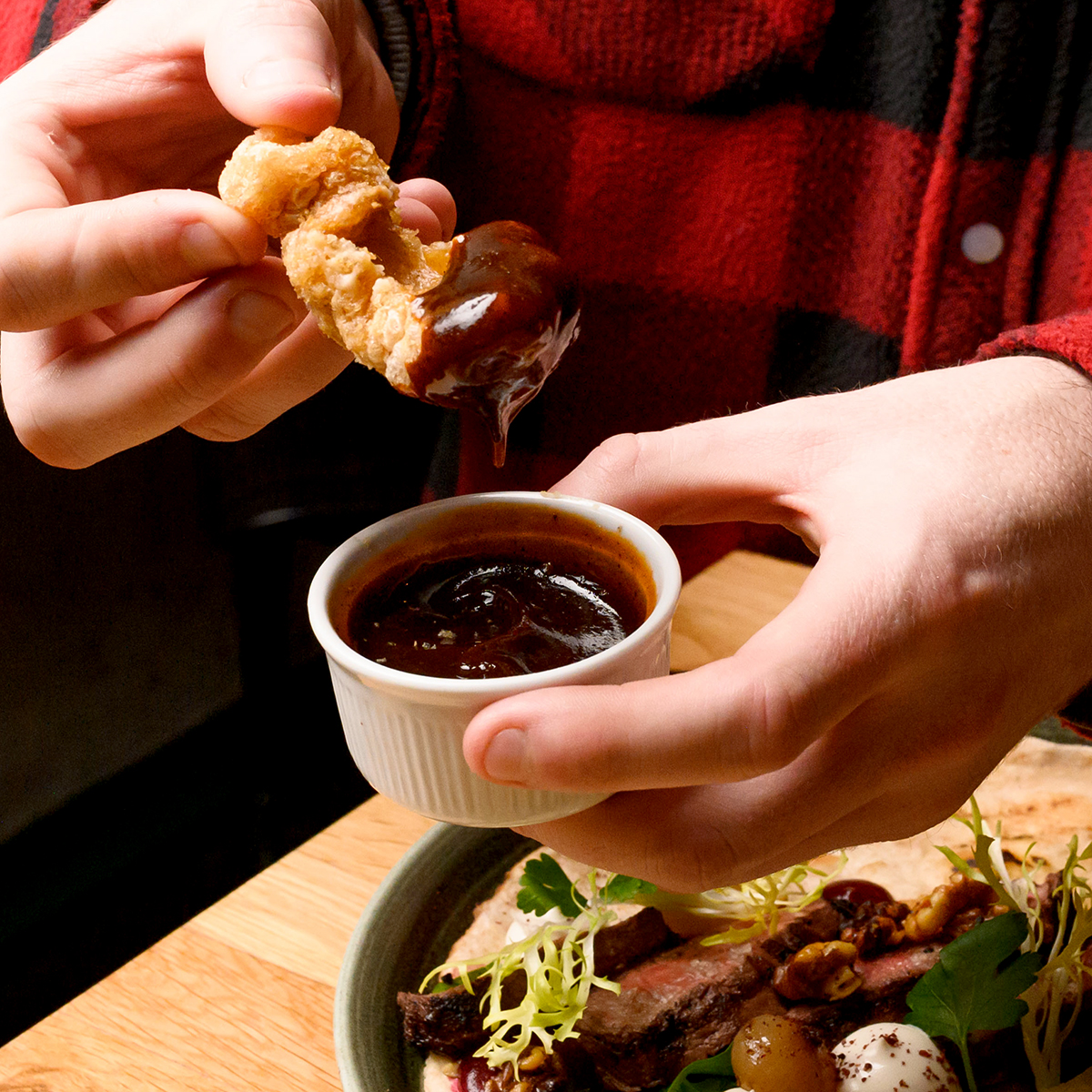 Tomato & Harissa Hot Sauce
BAB
I was seriously impressed when I first found out that BAB in the Northern Quarter actually made all of their in-house hot sauces. So impressed in fact that I demanded to try them all and reviewed and then paired every single one. Now that they’re back open again, with a new menu no less, now is the perfect time to get involved in some spicy sauce heaven. Dip your kebab liberally in the sauce and enjoy. 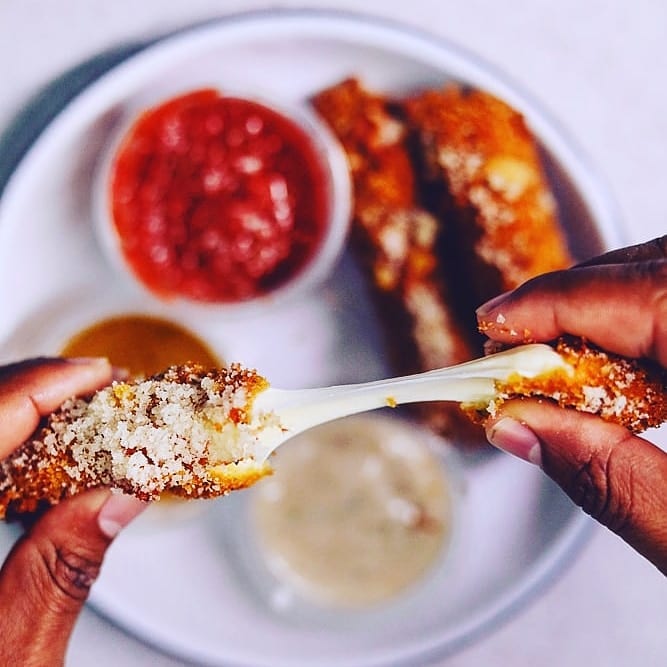 Marinara Sauce
Lazy Tony’s
Now, I’m a massive fan of Mozzarella Sticks, especially when they’re as big and cheesy as the ones offered up by Lazy Tony, but they’re nothing without a sauce for dipping, and this Marinara Sauce is out of this world good. It probably comes as no surprise considering the quality of the lasagne itself, and you’ll be wanting to dip everything in this once you’ve finished with the cheese. 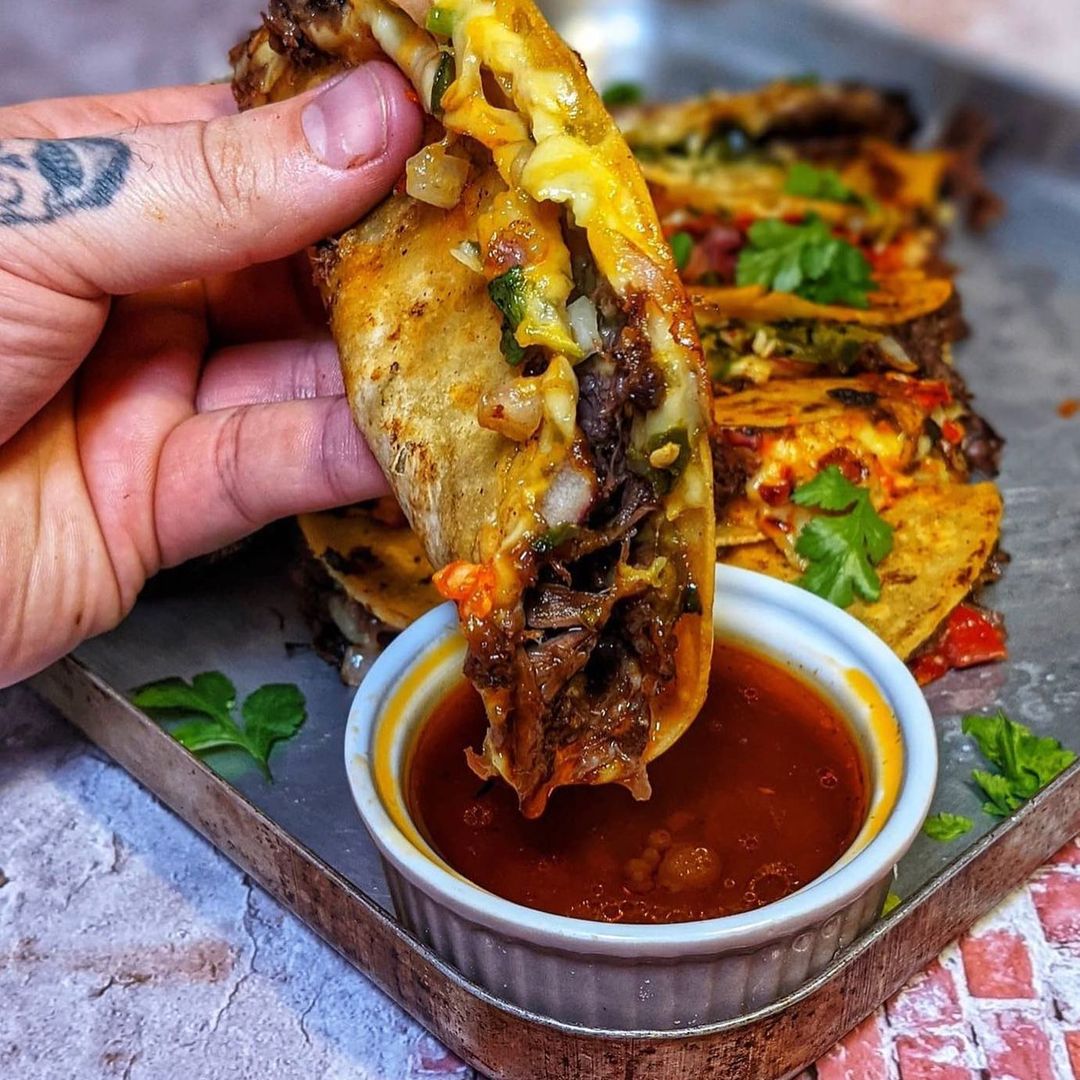 Beef Consommé
Birria Brothers Tacos
Taking a dish that everybody already knows, in this case tacos, and then transforming it into something that has people queuing up for hours down the street is exactly what the team at Birria Brothers did this year – and I’d say that 40% of it is down to their dip. A Beef Consommé, which to us peasants is just a posh (French) word for gravy, that the tacos are not only fried in but you then also dip them in there too. These are easily the best tacos in town, and dare I say it, the best gravy too!? 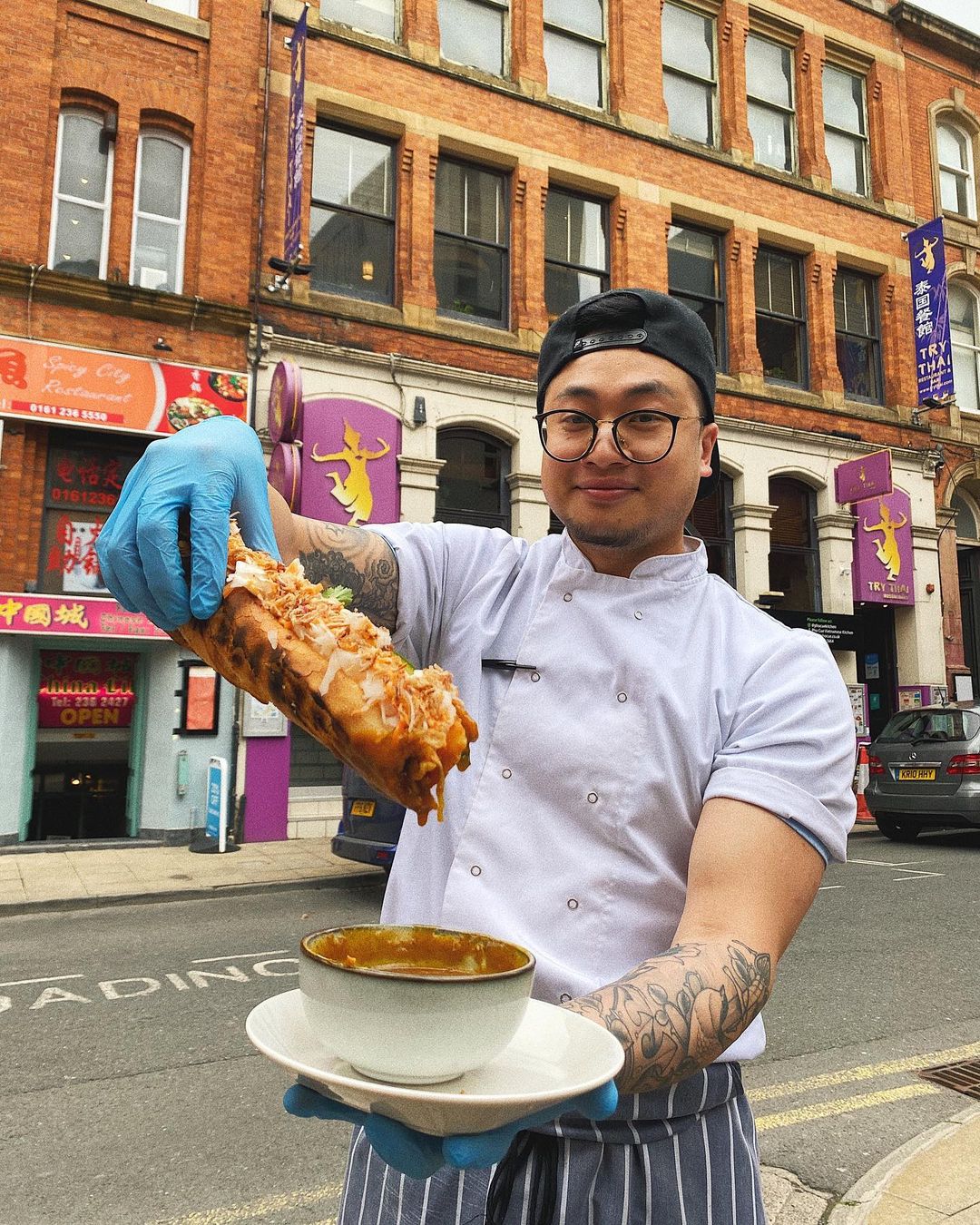 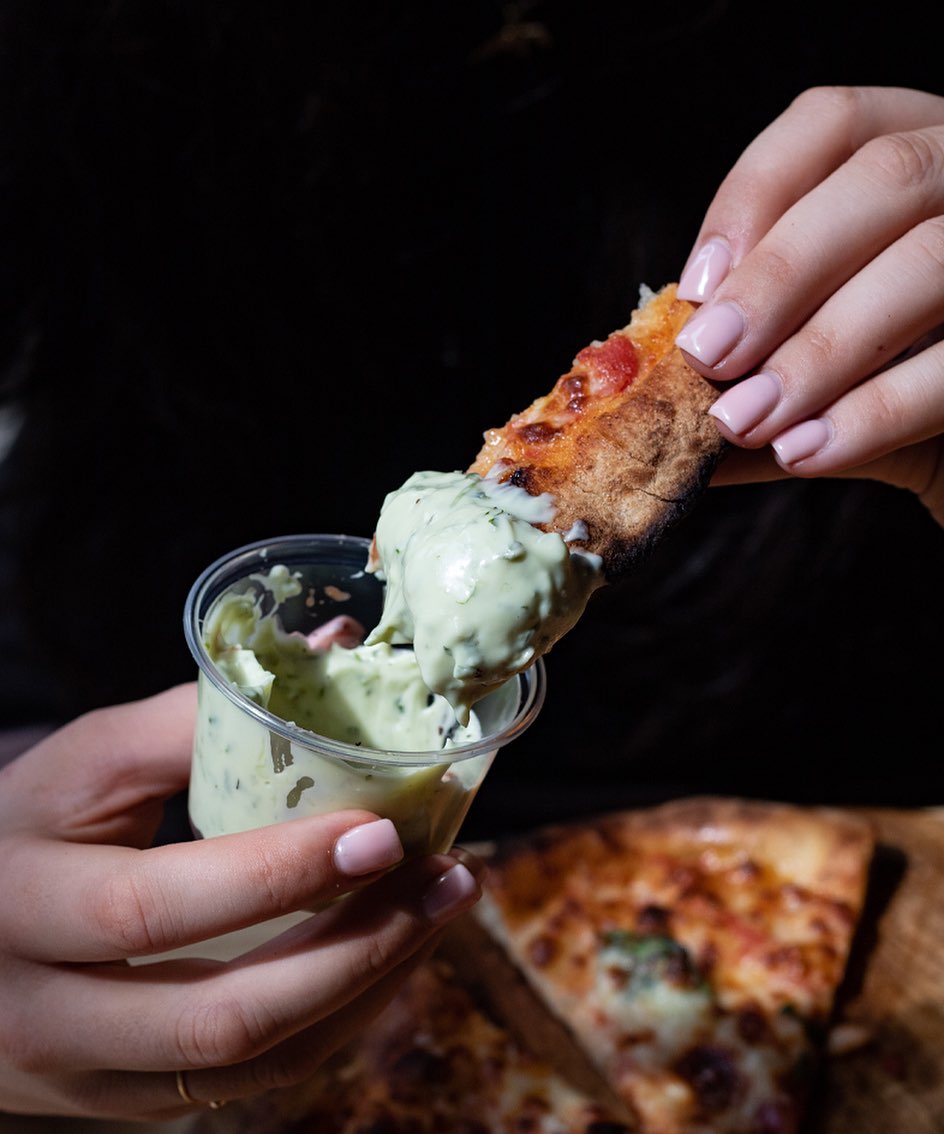 Wiltshire Truffle
Dokes Pizza
Specialising in ‘Anglo-Saxon Pizza’, Dokes in Society is a truly unique experience, and a must-visit for anyone who enjoyed the highest-quality produce from around the UK conveniently placed on a pizza for your enjoyment. They also do some fantastic dipping sauces here, all made in-house, but their best must surely be the Wiltshire Truffle, which is made using fresh truffles from a unique secret location in, well, Wiltshire. 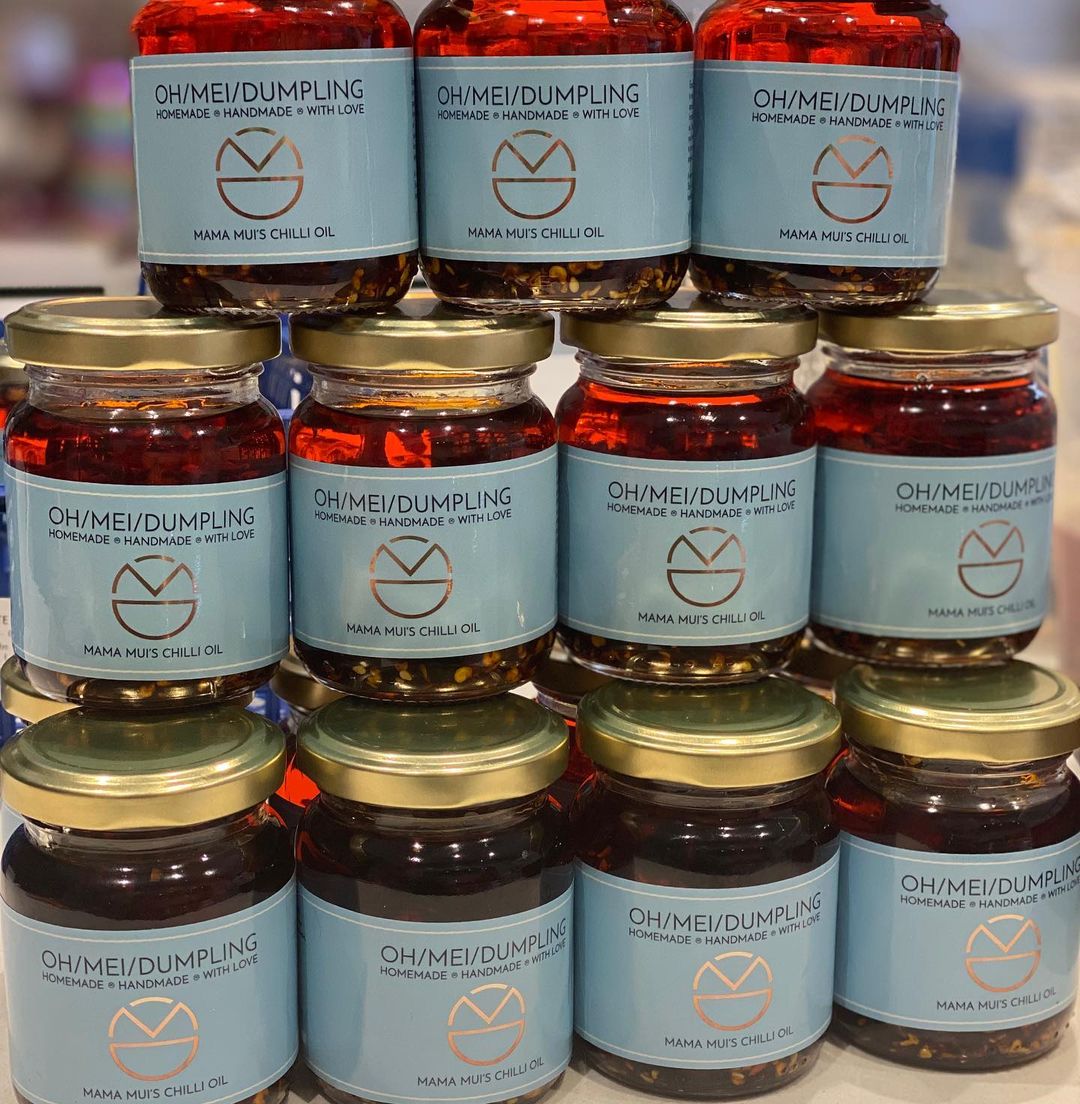 Mama Mui’s Chilli Oil
Oh Mei Dumpling
Eating them the proper Chinese way, you’d grab the vinegar and chilli oil on the table, mix them in a little bowl and then proceed to dip your dumplings in there – allowing the tangy, spicy concoction to permeate every little bit of the wrapped morsel. Unfortunately, most places in the UK just offer you soy sauce on the side – which is nowhere near as good. But luckily Oh Mei Dumpling make their own version – Mama Mui’s Chilli Oil and it’ll effortlessly take your dumplings from fantastic to f**king fantastic. 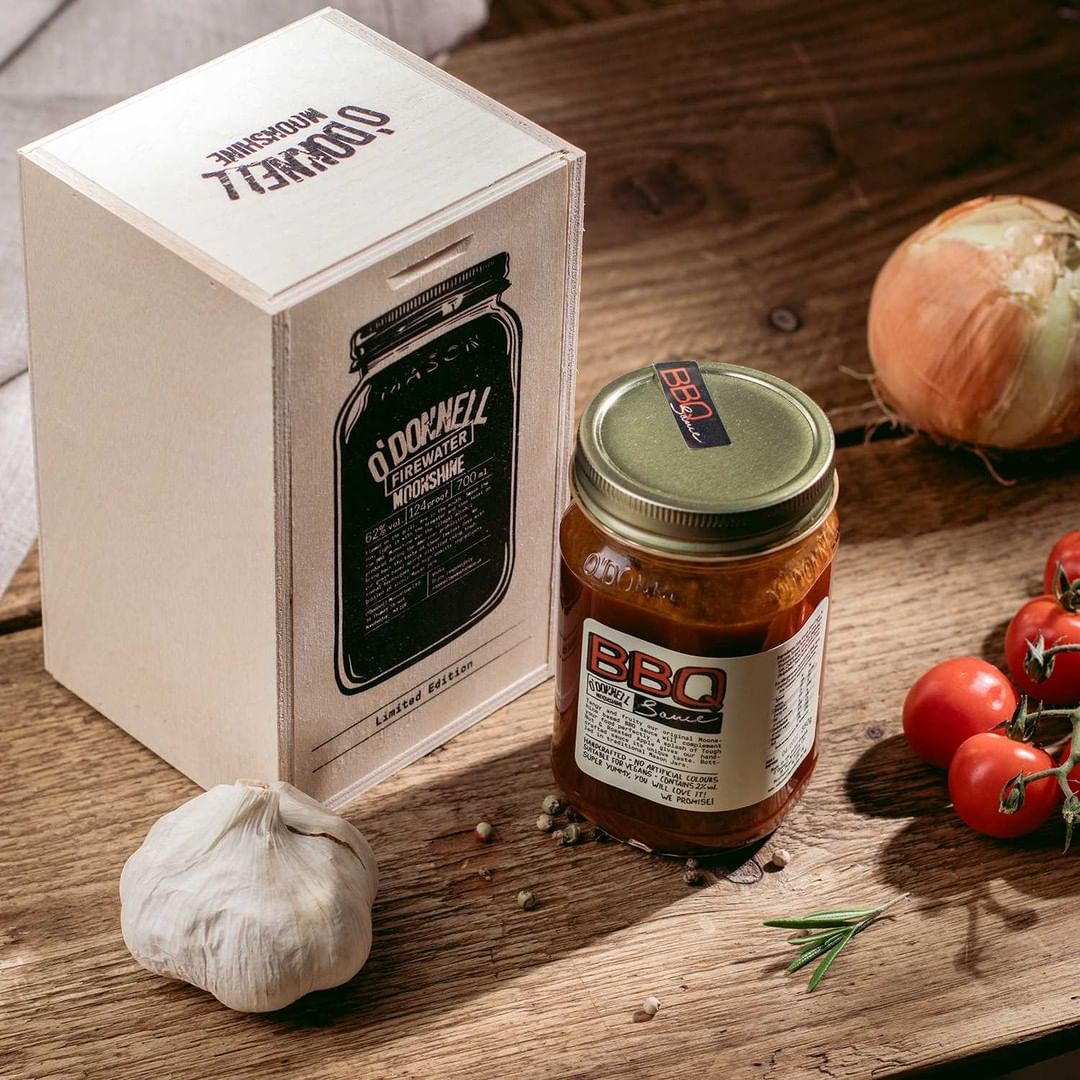 Moonshine BBQ Sauce
O’Donnell Moonshine
A newbie on the scene and this stuff is pure madness bottled up and ready for some serious dippage. Tangy, fruity and smoky, this BBQ sauce is refined using O’Donnell’s very own ‘Tough Nut’ and ‘Roasted Apple’ moonshines – meaning it has a serious kick to it too. You can use it as a marinade or glaze for your BBQ, or best of all, just dip your chips in it until you explode. 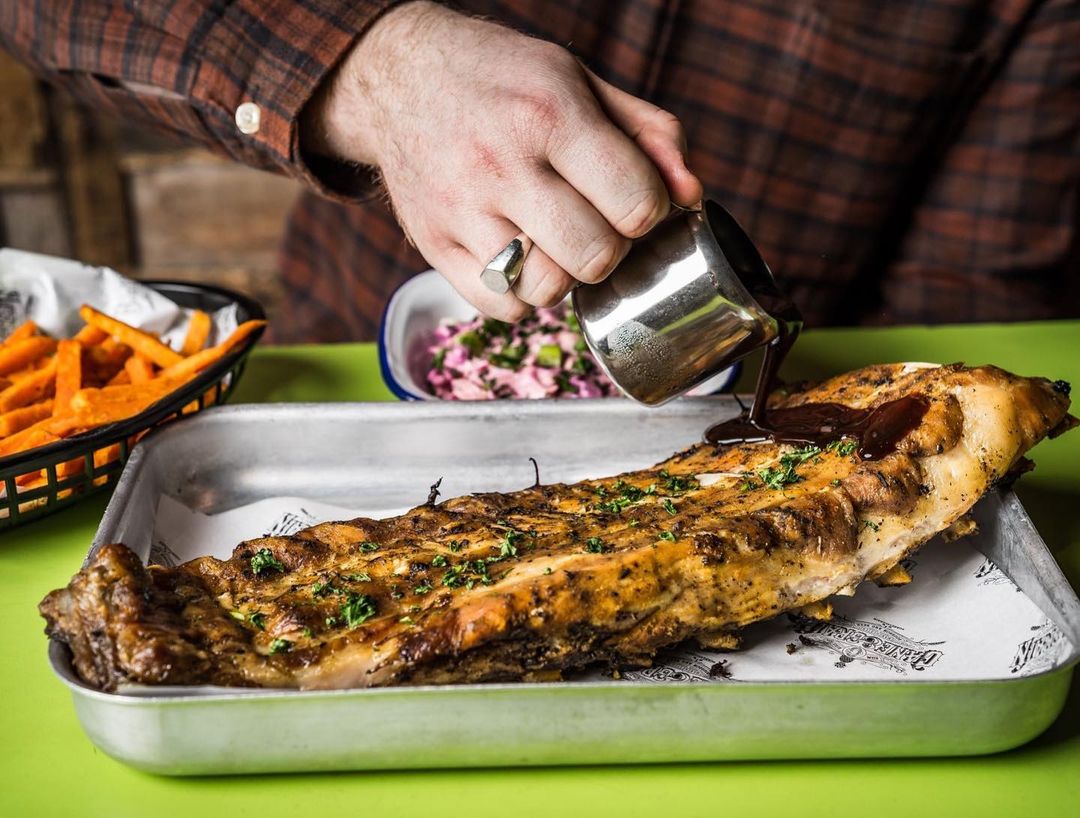 Bourbon Gravy
Cane & Grain
Combining two of the things that make any Southern American gentleman weak at the knees, no, Cane & Grain haven’t invented a Bible & Assault Rifle Sauce – it’s Bourbon & Gravy! My pathetic attempts at humour aside, this gravy is sublime, perfect with chips (coz we’re Northern innit) and even better when you have a little pot and dip their Chicken Burger into it. Or just smother it on your ribs and get messy. Or order 3 tubs and do shots. 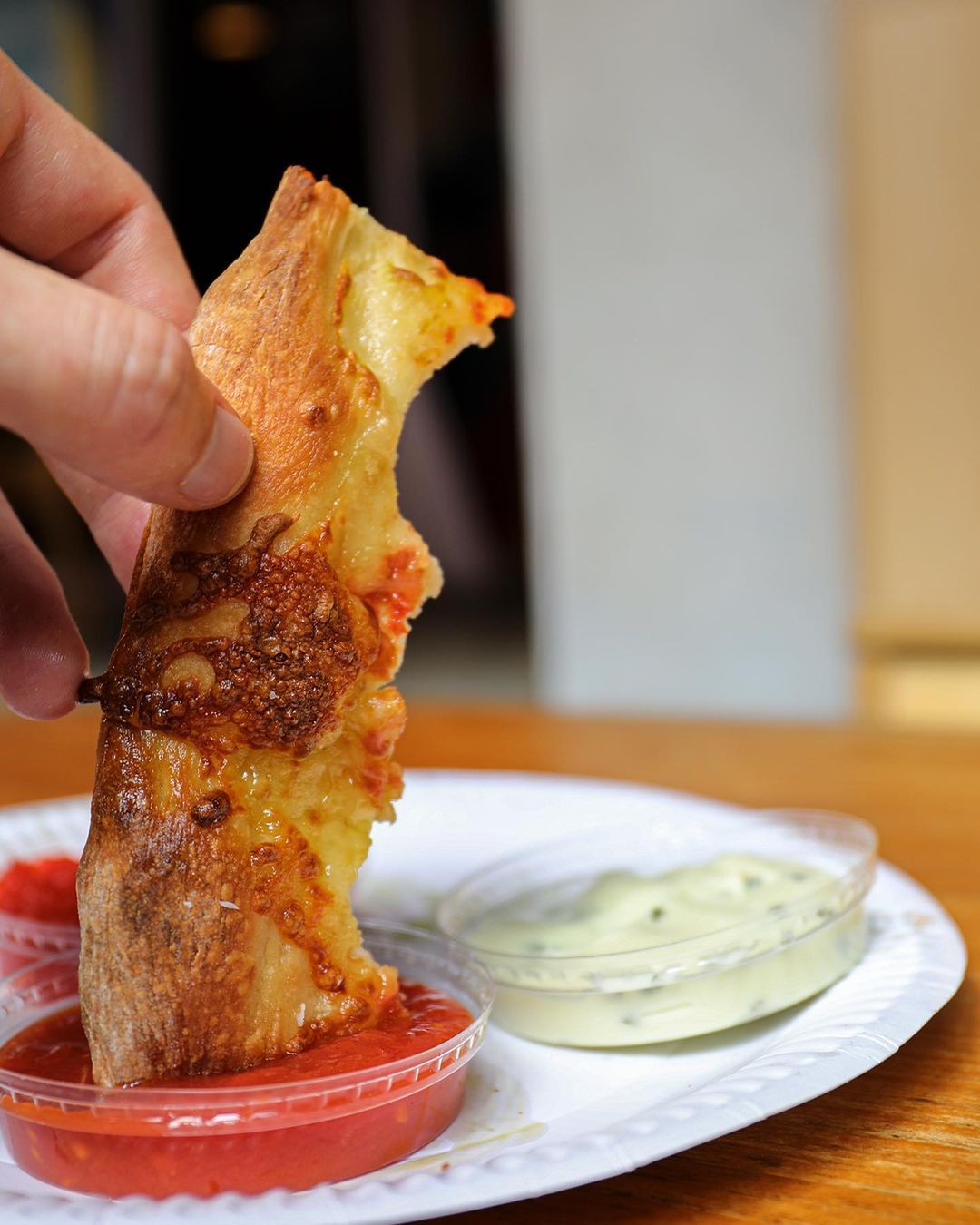 Garlic & Herb Sauce
Nell’s Pizza
You know that massive pot of sauce that you get with your Domino’s pizza on a hungover Sunday afternoon? The one that’s more addictive than crack? Well, Nell’s have created their own version and, dare I say it, it’s actually better than the Domino’s one. Maybe it’s because the pizza is 100x better, or maybe it’s just because it’s not mass produced, but it’s a winner and we love it. 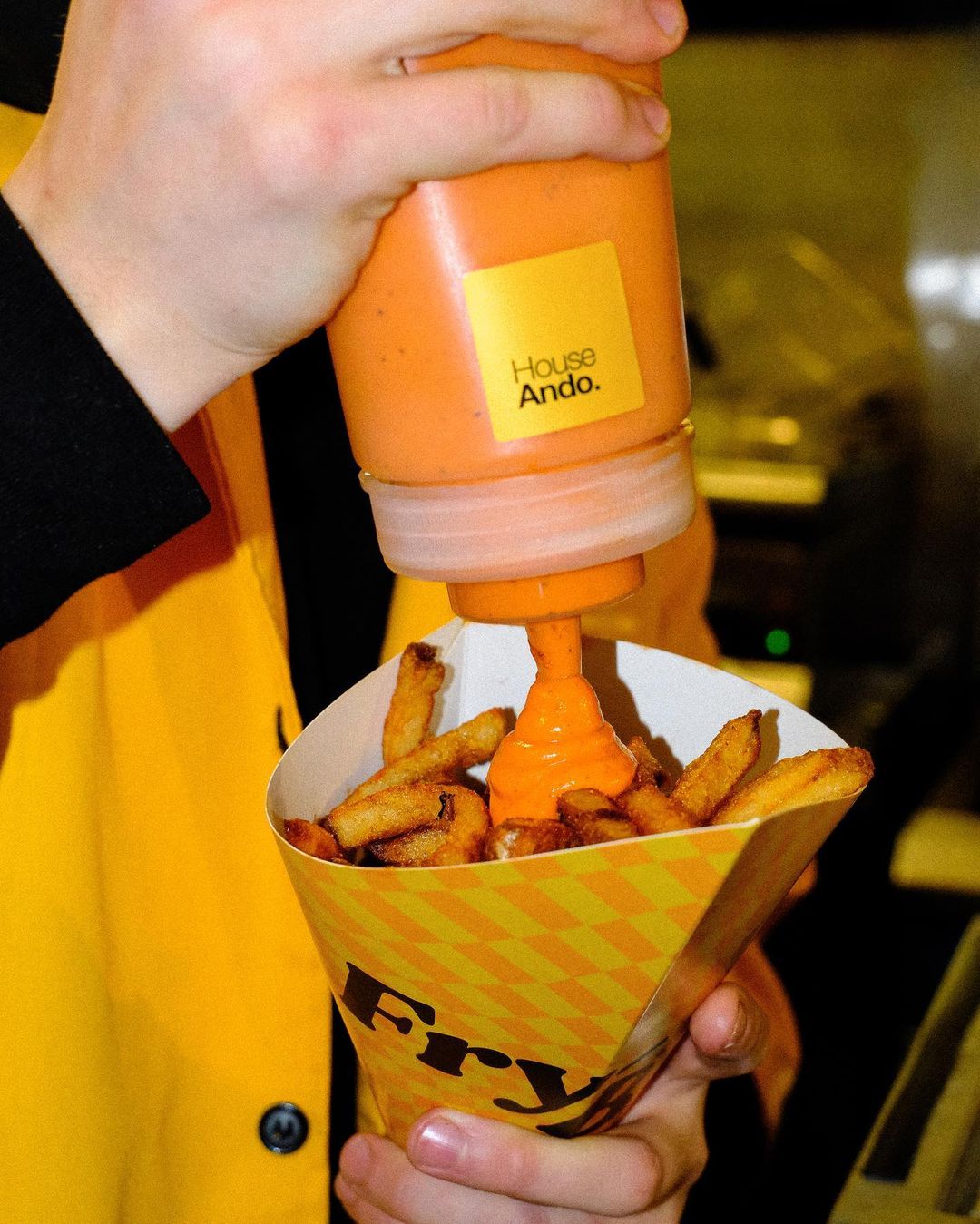 House Ando
The Fry-By
If you’re wanting chips, then there are fewer places in the city better than Fry-By in the Northern Quarter. Not only are their chips the main focus, but they have a mightily impressive selection of dips and sauces to smother all over them, and out of all of them – the House Ando is the one I’ve chosen. To be fair to them though – you can choose ANY of them – they’re all dead good.

“Have a campachoochoo on me!” An Evening with Bob Mortimer at Bridgewater Hall