Umezushi: Manchester’s gateway to the true taste of Tokyo

Sushi, the real stuff anyway, is something shrouded in myth.

For me, the idea of authentic sushi conjures up images of ancient, white-bearded masters working away with their hands and slicing fish effortlessly with folded steel knives.

Some people say it takes five years to train to be a sushi chef. Some say 10 or 12 or even 20, but in truth, it comes down to the passion you have for it.

As soon as I sat at the bar and stared at Head Chef Omar at work I was immediately transfixed.

“So is it as hard as it looks?”  I asked precociously

“Yes.” He replied. ” But learning to make good sushi is like learning anything, you need to work at it, study it for hours, days and months and most importantly, you have to make mistakes. But eventually, you will have it.”

Good sushi isn’t about learning from a master or ancient secrets passed down from generations, it is about knife skills, fine ingredients and fresh fish treated beautifully.

If you want to learn this lesson for yourselves, you will certainly learn it at the unassuming little sushi joint Umezushi tucked away under the arches of Victoria – sometimes you find good food in the most unexpected places and this is certainly one of them.

Sitting at the bar with a few cups of steaming tea, we began with a bit of sashimi. In case you don’t know, sashimi is raw fish or seafood served chilled and thinly sliced and contributes massively to the argument that this is the best way to enjoy seafood entirely. I tend to agree – especially when presented with the kind of quality you find at Umezushi.

Although one might think it is the simplest part of sushi – it actually takes the most skill as the texture and taste are massively affected by how the slicing is actually done.

You can opt for a platter of 12 pieces for £30, but it is most cost effective to order it individually. A must have is, of course, the Salmon (£4.70 for two). It is made with only the best Scottish salmon which I feel is a nice touch to champion British produce even when making Japanese food. It came served with a peppery nasturtium leaf which brought some welcome spice to the stunning slice of fish.

There was also sashimi of Scallop (£5.90 for two) which is a bit of an acquired taste so maybe do not opt for this if you are a raw fish virgin. If you are a veteran, make sure you DO order it because it is certainly an experience not to be missed.

Now, I used to think that I didn’t like scallops at all, but it turns out I just don’t like them cooked. I adored the delicate seafood flavour paired with the almost gelatinous texture which was like nothing I had ever tasted. Topped with salty bursts of salmon roe it couldn’t have tasted more like the sea if a mermaid sat on it.

Pickled Mackerel (£4) tasted familiar and was again caught from our rainy shores with an elegant sweet and sour flavour. This had a different texture to the others as the acid from the plum and rice wine vinegar marinade cooked it slightly which made it a must-have choice on any sashimi platter.

Hamachi ceviche (£23) was next which is a fish I have never heard of – never mind eaten. According to head chef Omar, who casually chatted to us at the bar while masterfully slicing fish and shaping rice like it was nothing, it’s in the same family as the mackerel and they ship it in directly from Japan.

Cured in citrus, soy and chilli for 10 minutes, the texture of the fish totally changes and sort of ‘cooks’ which is a method stolen from the South Americans. It was extremely light and acted as the perfect palate cleanser between courses. It really was quite excellent.

Nigiri comes next, and this gave Omar the time to really show off his impressive skills. The word Nigiri literally translates to ‘gripping’ which is the key action in which the chef masterfully shapes the sushi rice in the palm of his hands which is then topped with a beautifully sliced bit of fish, hugging the rice as if it was a sheet of silk.

The former was wonderfully tender and slow cooked in soy and sake to ensure there were no rubbery tentacles to be seen. The result was a soft, sweet and by-no-means overbearingly fishy slice of octopus which was ideally paired with the sticky rice which really brought out the sweeter, creamier notes.

The latter was the famous Unagi (or smoked eel) which was nothing less than sublime. The Umezushi team smoke this eel in-house in a combination of mirin and soy for that classic and intrinsically Japanese flavour.

I have to say, it was masterfully done, with a lovely char whilst still managing to be tender, flaky and full of the sweet and salty flavours in the marinade.

Considering my less than successful experience of eel a few weeks ago, this nigiri showed me how wrong everyone else gets it and how fantastic it really is when treated correctly and with care.

Our next dish acted as another sort of palate cleanser between our rounds of sushi. Stone Bass with Dashi (£19)  was certainly a more substantial dish which was so popular it has made the leap from the specials board to the main menu. It was light and aromatic in the most delicate way and the dish was perfectly cooked, which is more on the side of undercooked if you ask me.

If anything was to really tell you that Umezushi is more than your run-of-the-mill sushi joint, it would be their menu of Maguro. The term refers to the Japanese word for tuna – which is probably the most popular fish in the country (and indeed the world) with a price tag to match.

In Japan, they take tuna VERY seriously, and sushi that is made with it is broken down into which part of the tuna it comes from. The further into the core, the leaner the meat and closer to the skin – the fattier and so on.

Most of us will have only had Akami (lean tuna) or Chutoro (medium fatty tuna) at a push- but did you know the culinary delight which is belly tuna, or Otoro? It is one of the single most delicious things I have ever eaten, and even though my list is growing by the day, it certainly lands near the top.

It is nothing like you would expect. The Otoro Nigiri (£9.20 for two) comes slightly charred and has a texture which is comparable to crispy, creamy beef fat without being overly oily. It was butter, and it literally melted in the mouth and it was one of the most unique food experiences I’ve had – and I’ve had quite a few.

Umezushi will do a platter of this maguro (which will set you back around £30 for two) so you can taste the difference between these different types of tuna – and I strongly recommend you do as it is the closest thing you are going to get to true Japanese cuisine without buying a plane ticket, if you hadn’t worked that out already of course.

In recent years, the secret about Umezushi has certainly got out, but it somehow still manages to hold on to its bespoke, hidden-gem status with some of the best sushi this side of Tokyo.

The size and intimacy of the place is certainly part of the charm, and if you go, I strongly recommend sitting at the bar so you can watch the masters at work – it is part of the experience and it shouldn’t be missed.

I wouldn’t call Umezushi cheap. An experience like ours without booze would set you back about £110, but you have to know that you are paying for the top-quality produce and incredible skill from their team of chefs.

Umezushi feels unapologetically authentic without having to try too hard from the food to the well-curated menu of traditional Sake to the minimal and hauntingly beautiful flower arrangements by Ike Bana.

In short, the best way to think about Umezushi is as a portal to a quiet street in Kyoto both in style and substance and any sushi-lovers culinary pilgrimage will not be complete without a visit. 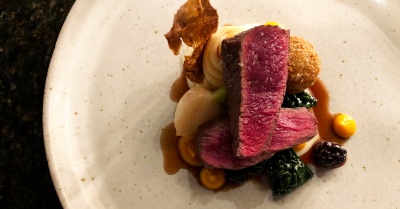 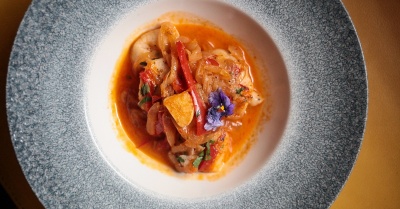 We review the 10-course Degustación Canaria event at La Bandera 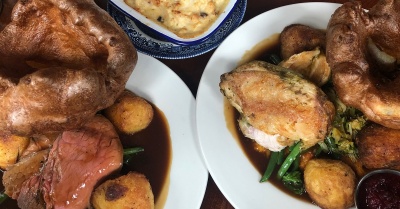