Where to Find the Best Bagels in Manchester

Bagels originated in the Jewish communities of Poland, first being mentioned in a 13th-century Arabic cookbook, referred to as ‘Ka’ak’.

Since then they’ve been noted in Polish royal family accounts in 1394, community ordinances in Krakow in 1610, and more recently – appearing on the streets in and around Brick Lane in London from the middle of the 19th century, known down there as ‘beigels’.

The large Jewish community in Manchester has resulted in us having some amazing delis and bakeries pumping out banging bagels. ⁠From Prestwich down to Chorlton, we’ve got some great bagel spots, so we’ve compiled a list of some of our favourites.⁠ 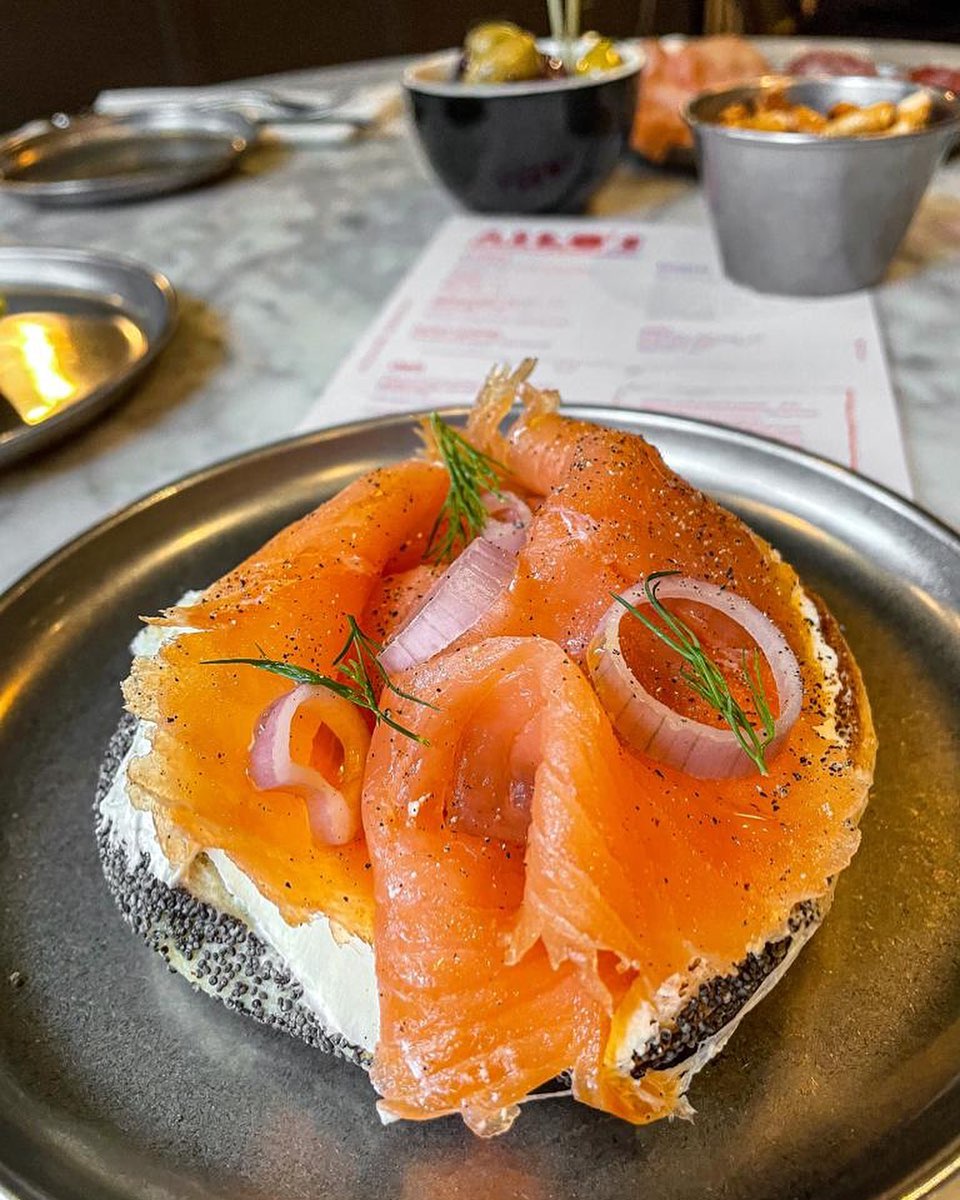 Arlo’s
The Northern Quarter neighbourhood deli and wine bar offer up a small, considered selection of fresh bagels, served open with a big cream cheese schmear. There’s Isle of Wight tomatoes and capers, baby cucumber and black pepper, smoked salmon and shallots and keta caviar and dill, plus a regularly changing selection of specials on offer. 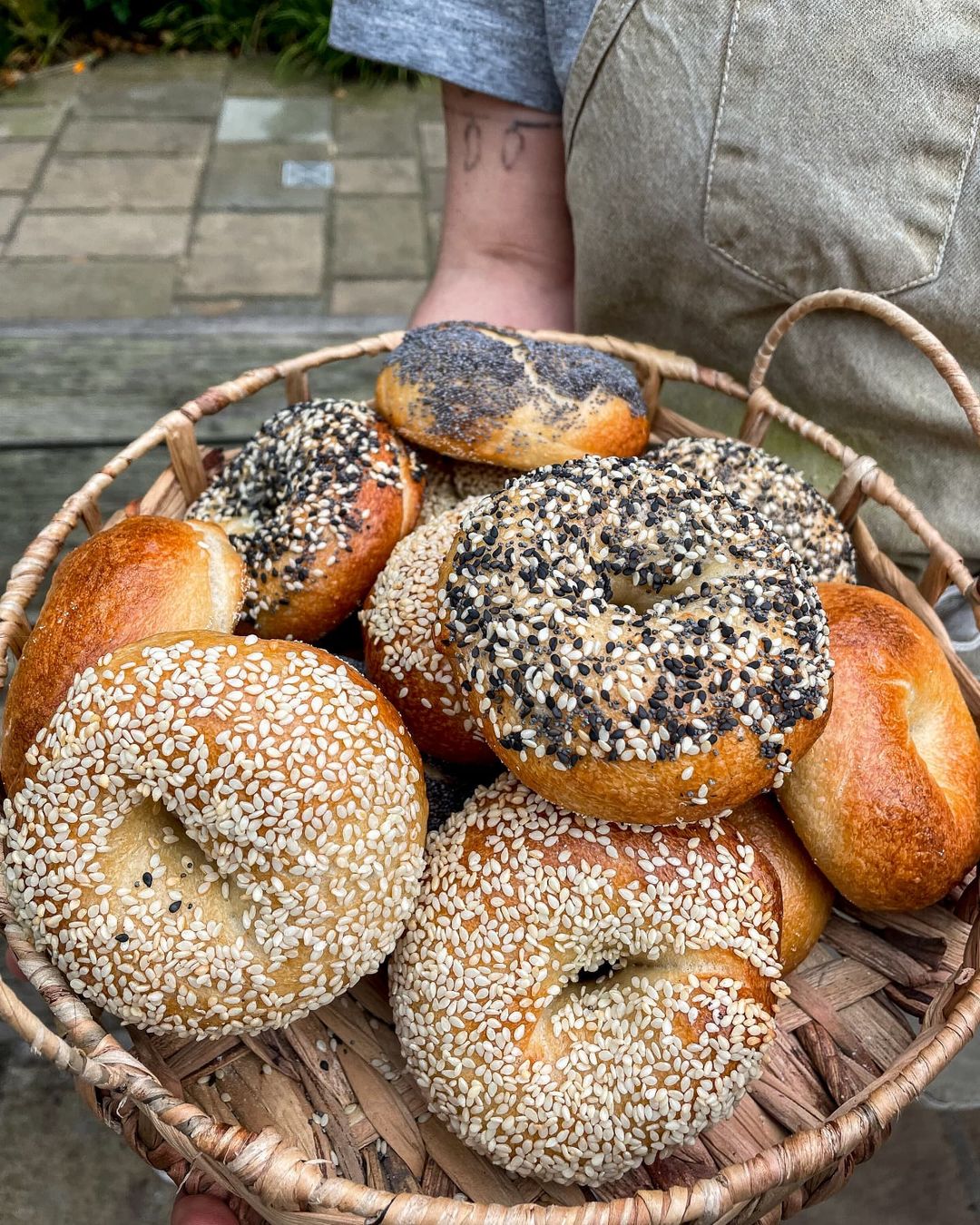 Bread Flower
Offering freshly baked bagels alongside freshly picked and arranged flowers, Bread Flower have made a big impression on the city since launching during lockdown in 2020. These bagels are outstanding, and you can have them with some fantastic homemade ‘schmears’ – the Yiddish word for ‘to spread’ is essentially cream cheese, taking inspiration from the classic New York bagel shops. Bread Flower 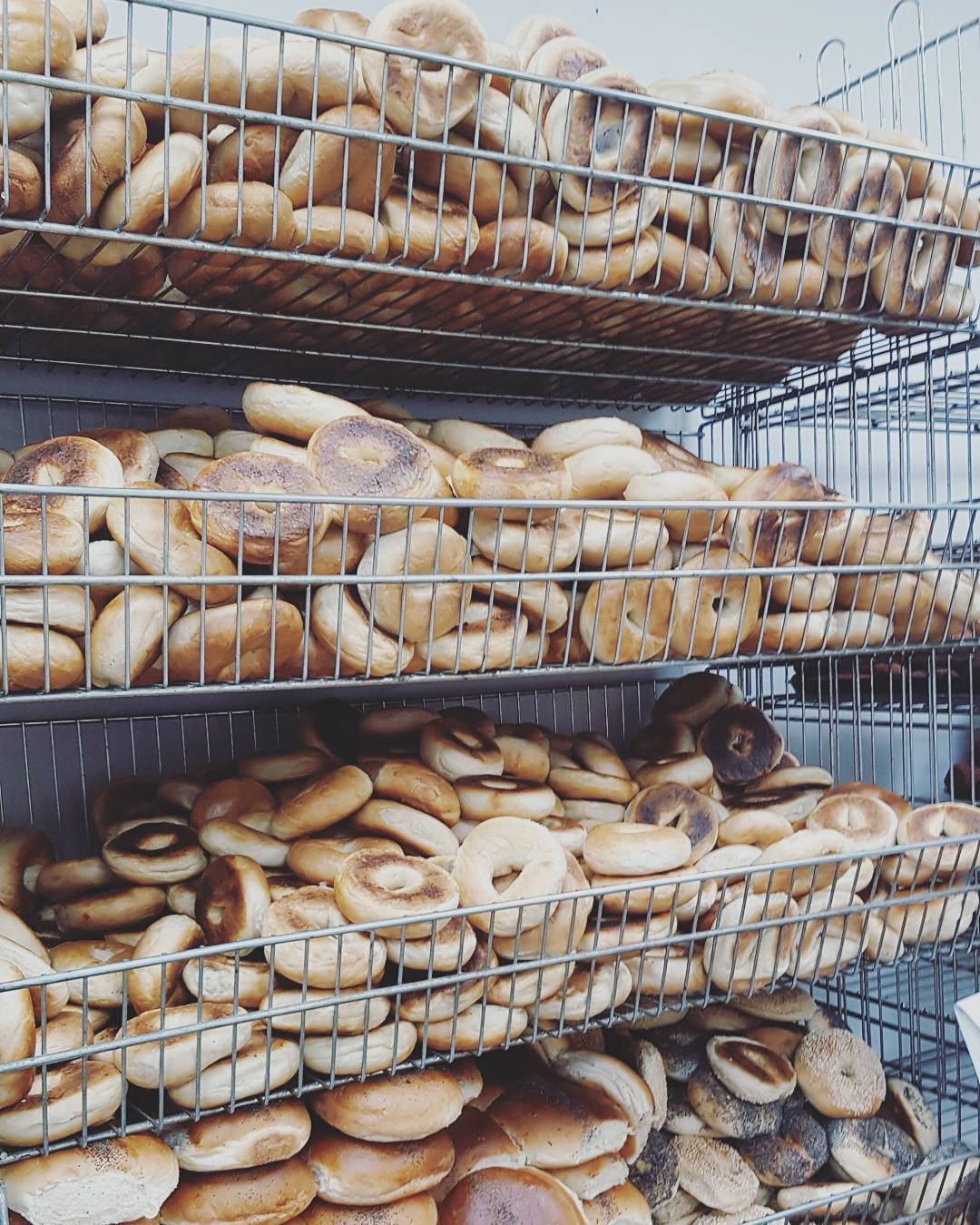 (Cooper’s) Let’s Fress Deli
Let’s Fress is a family-run kosher deli offering up homemade produce to the people of Preswich. It’s home to the outstanding £5 Sunday Bagel deal, where you get six fresh bagels, plus smoked salmon and cream cheese, chopped herring and egg mayonnaise. All for 5 sheets. 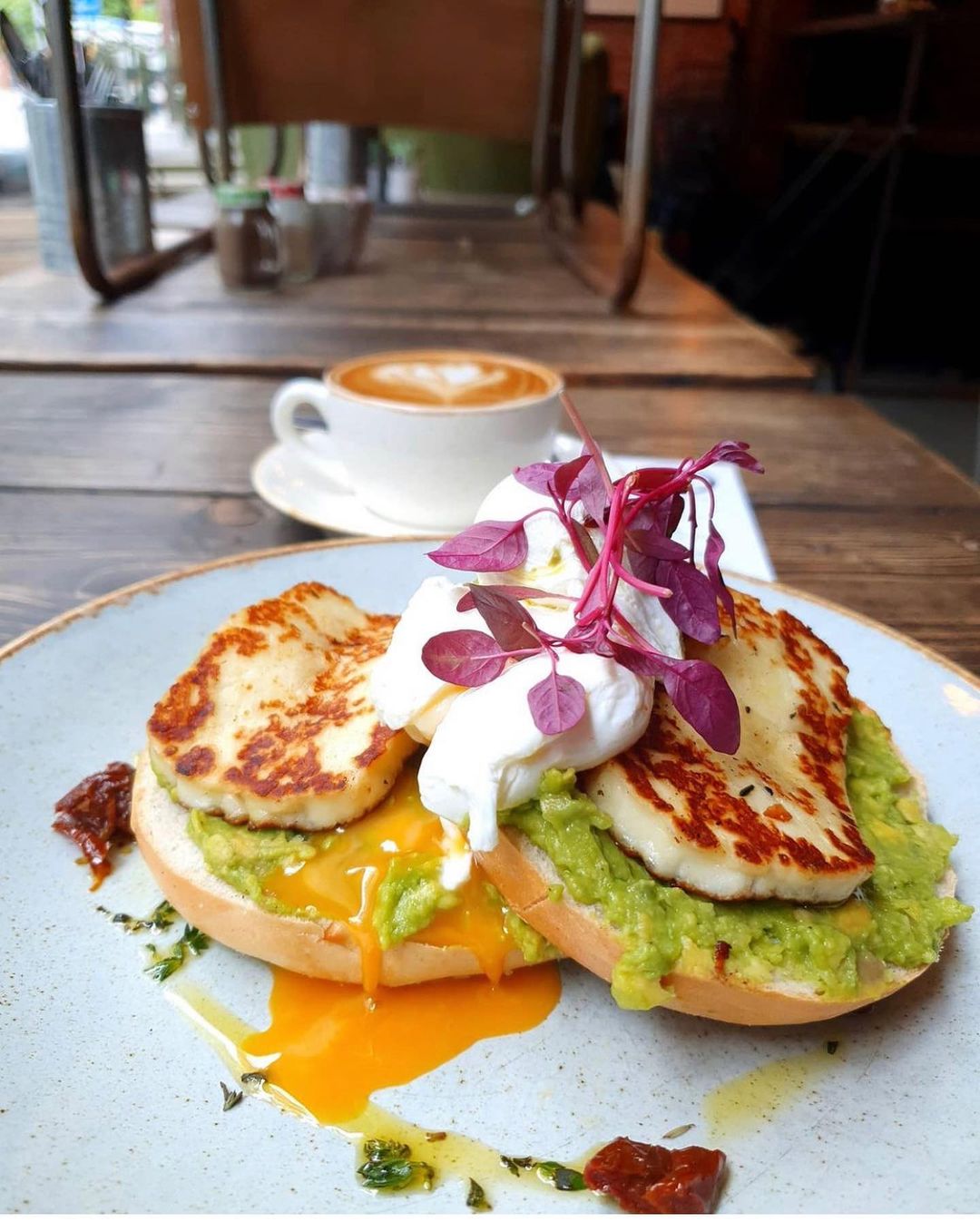 19 Cafe Bar
Right in the midst of some seriously good breakfast and brunch places in the Northern Quarter, 19 Cafe Bar is a cracking little hidden gem, tucked away behind a bus stop on Lever Street. Their dishes are truly exceptional, and their bagels – topped with a variety of breakfast goodies – are easily some of the best in the city. 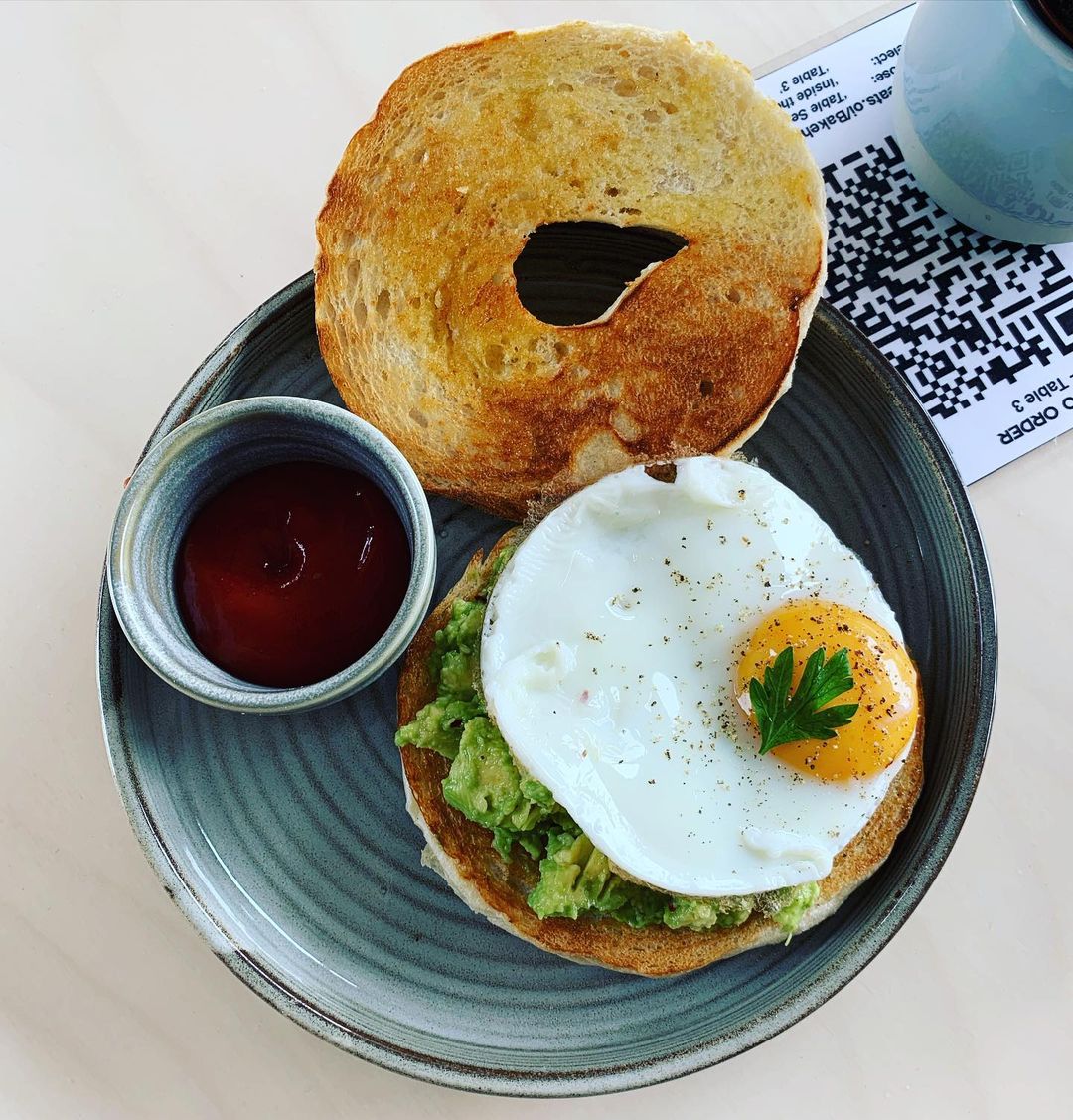 Bakehouse 32
A firm Stretford favourite, Bakehouse 32 offer up some pretty special pizzas which are the perfect blend of Neapolitan chewy dough and New York style crispiness – always topped with tonnes of cheese and some pretty imaginative toppings. They also serve up New York style bagels too – which are excellent. Their breakfast bagels are a must. 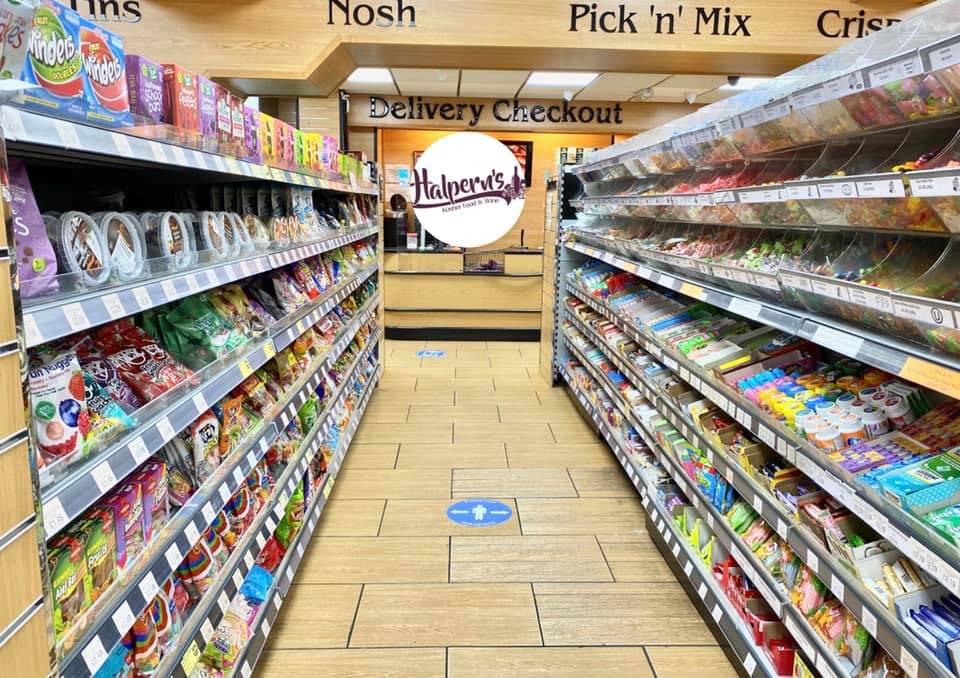 Halpern’s Kosher Food Store
The largest kosher supermarket in Manchester, Halpern’s offer a dazzling variety of products, from fresh fruits and veg, deli meats and a rather impressive baked section, where you can get challa, buns and of course – some of the best bagels known to man, courtesy of State Fayre. 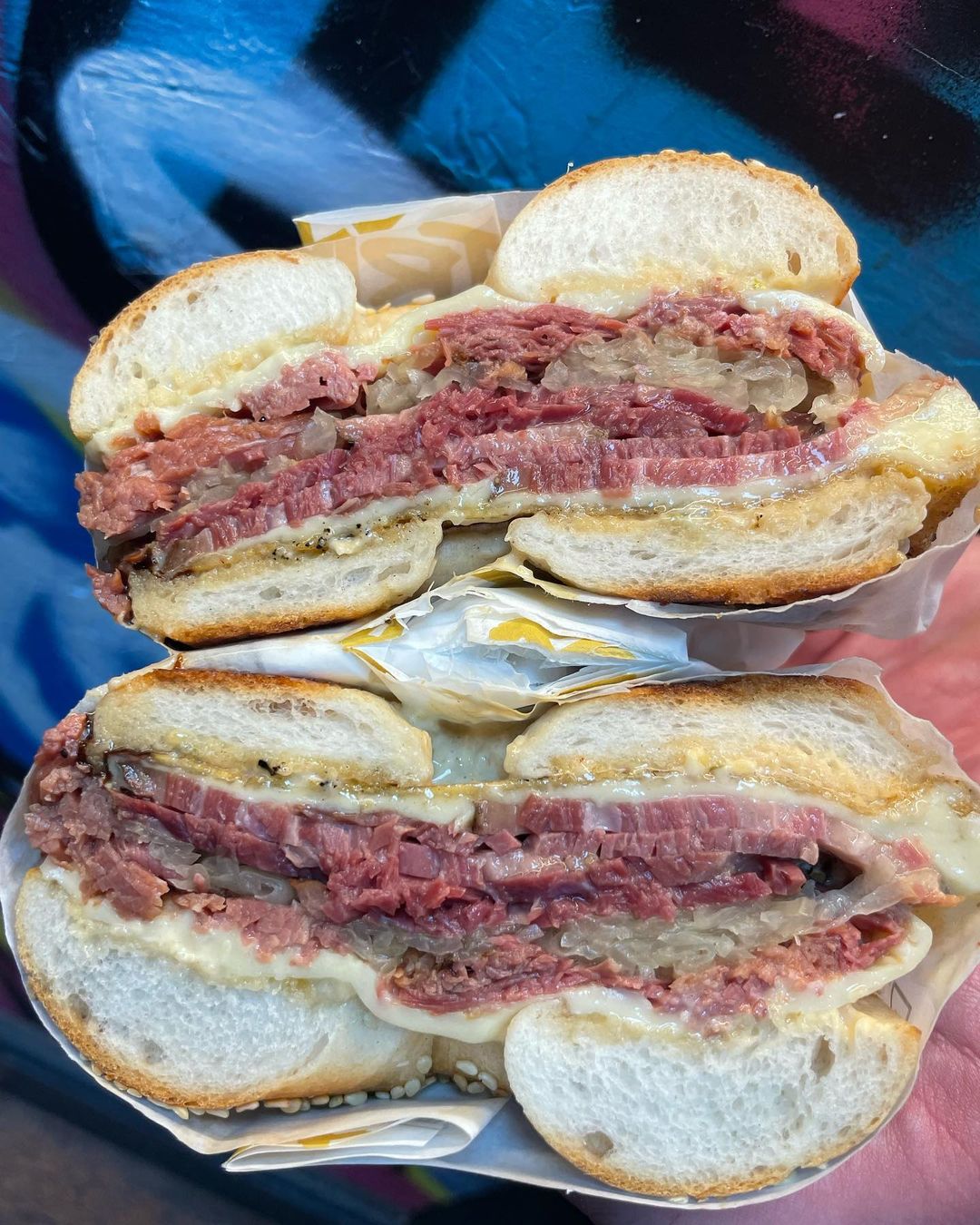 Triple B
Once Eat New York, now Triple B – but still serving up Manchester’s biggest and most impressive bagels down in Prestwich. Their Salt Beef Bagel is hard to beat, but it’s with their Reuben where Triple B really shine – stuffed to breaking point with their signature house-smoked pastrami, alongside grilled Swiss cheese, sauerkraut and Russian dressing. Amazing. 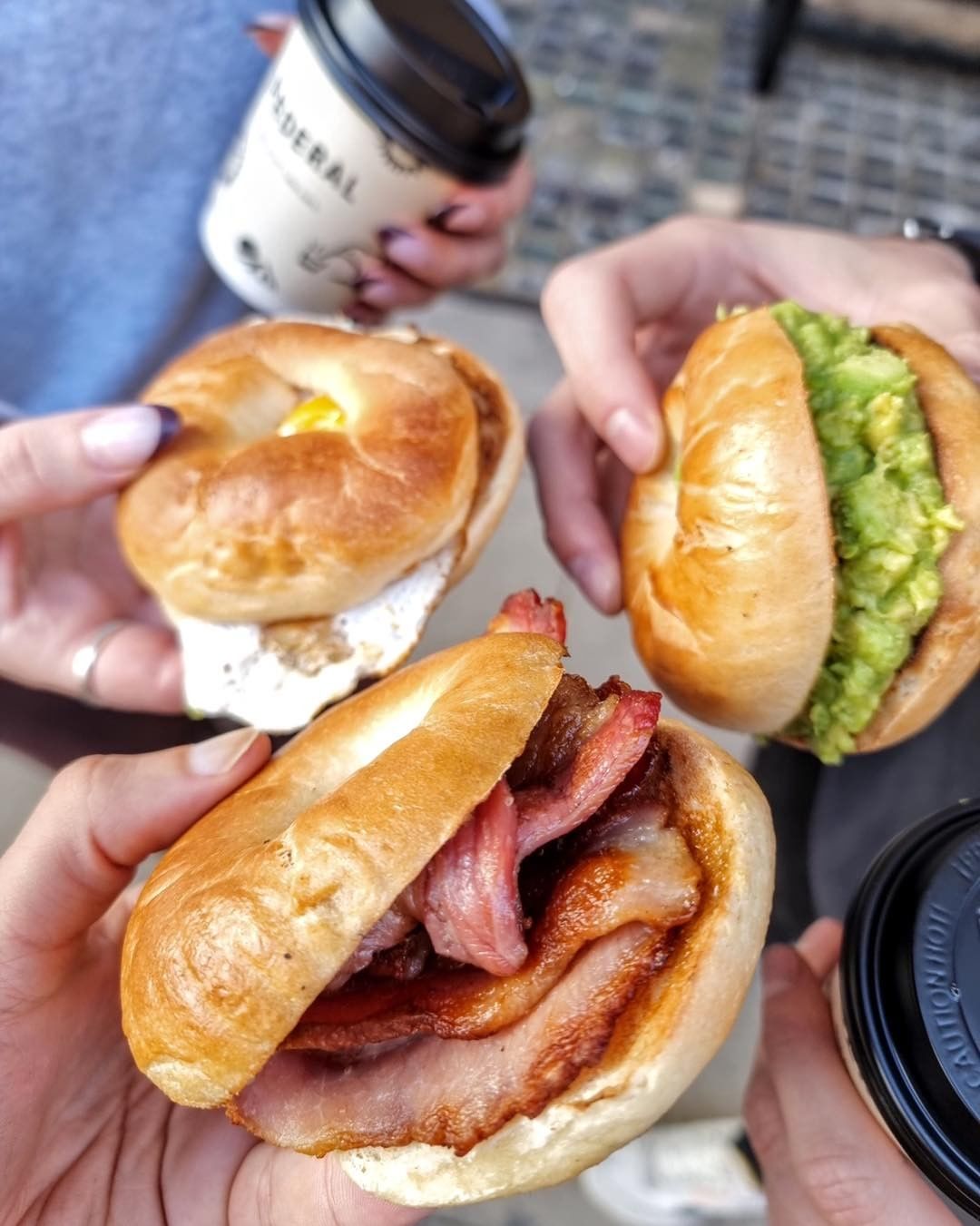 Federal
With queues around the block on most weekends, once you finally get in there, it’s not hard to see why Federal is so popular amongst us Mancunians. Their bagel game is on point too, with a selection of breakfast bagel sandwiches, and their excellent Smoked Salmon Bagel topped with their homemade Dukkah mix, aioli and hollandaise. 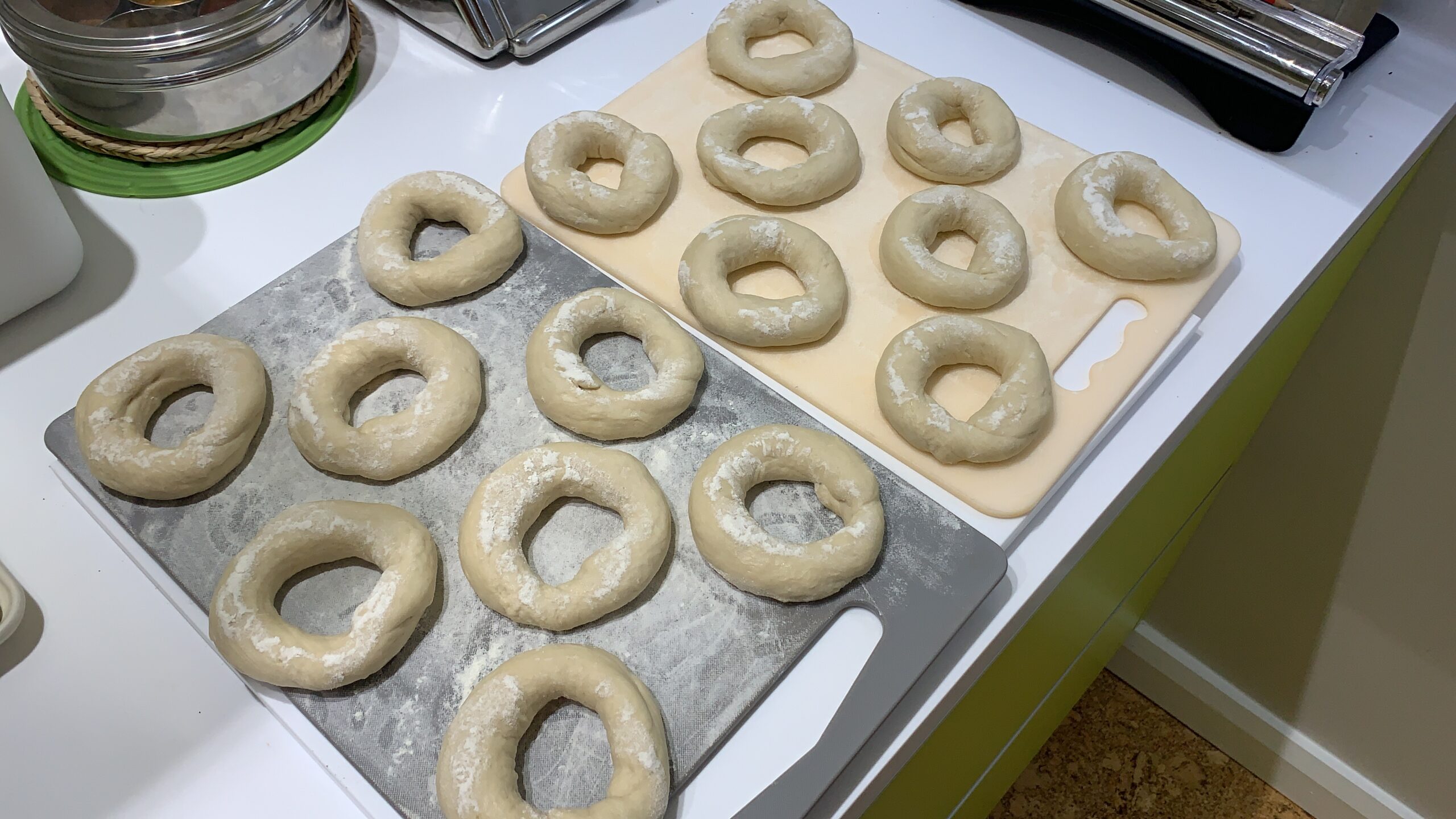 The Homeless Bagel
David Woodroffe has created ‘The Homeless Bagel’ – a community project which sees him bake fresh, delicious bagels for the charity Mustard Tree – helping people from across Greater Manchester have access to low cost food. It’s a truly selfless endeavour, and he’s raising money on his JustGiving page which you can check out here: 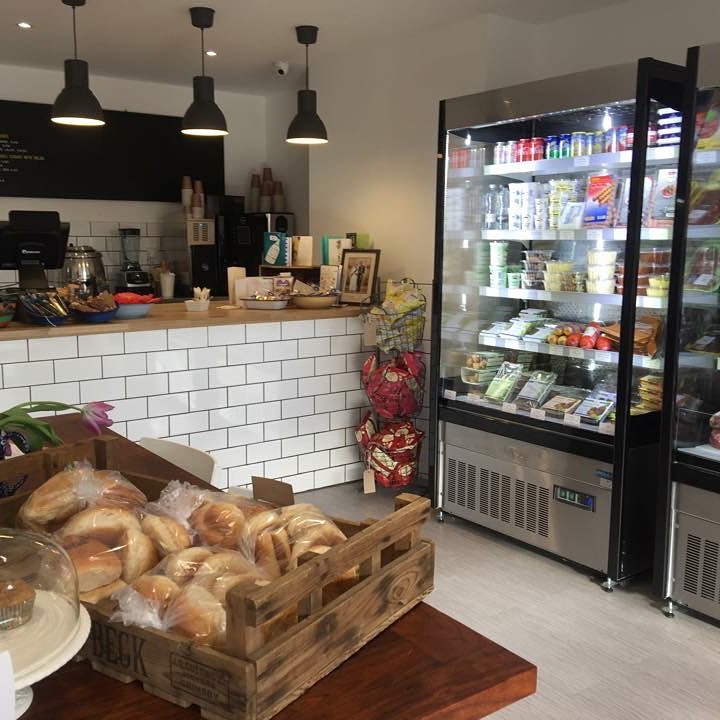 Lulu’s Kitchen
A kosher eatery and deli in Cheadle, with an emphasis on New York, Middle Eastern and Eastern European dishes. Massively popular amongst locals, Lulu’s offer up freshly baked bagels, and their Salt Beef is a must-try for anyone. You’ll also find regularly changing specials, soups, salads and loads more. 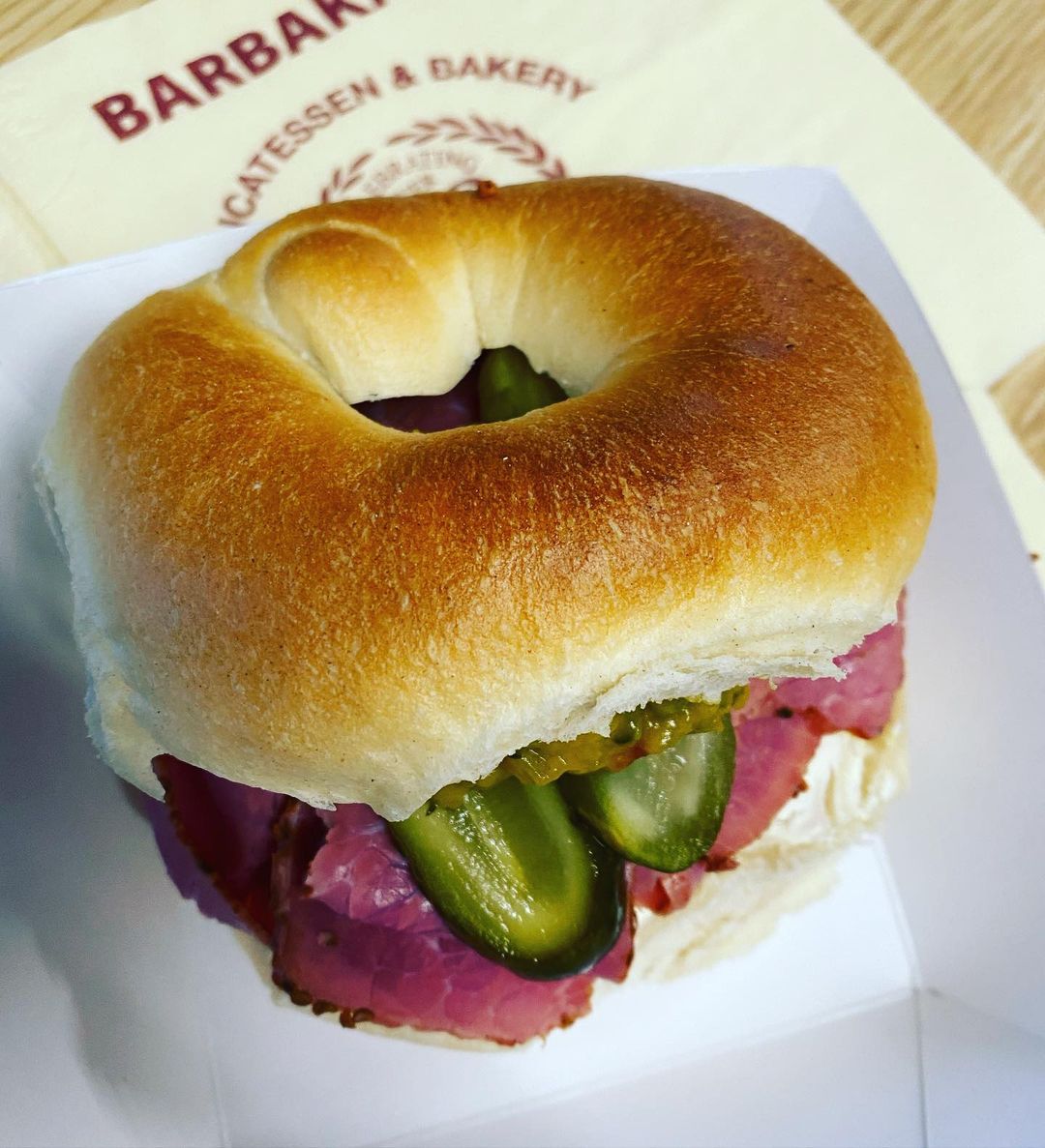 Barbakan Deli
Suppliers of a fair few of the venues on this list, Barbakan Deli in Cholrton has been top of the game for many, many years now – and their bagels are a testament to the skill and dedication of all. They make some fantastic butties in here – many of which are served on their legendary freshly baked ‘beigels’. 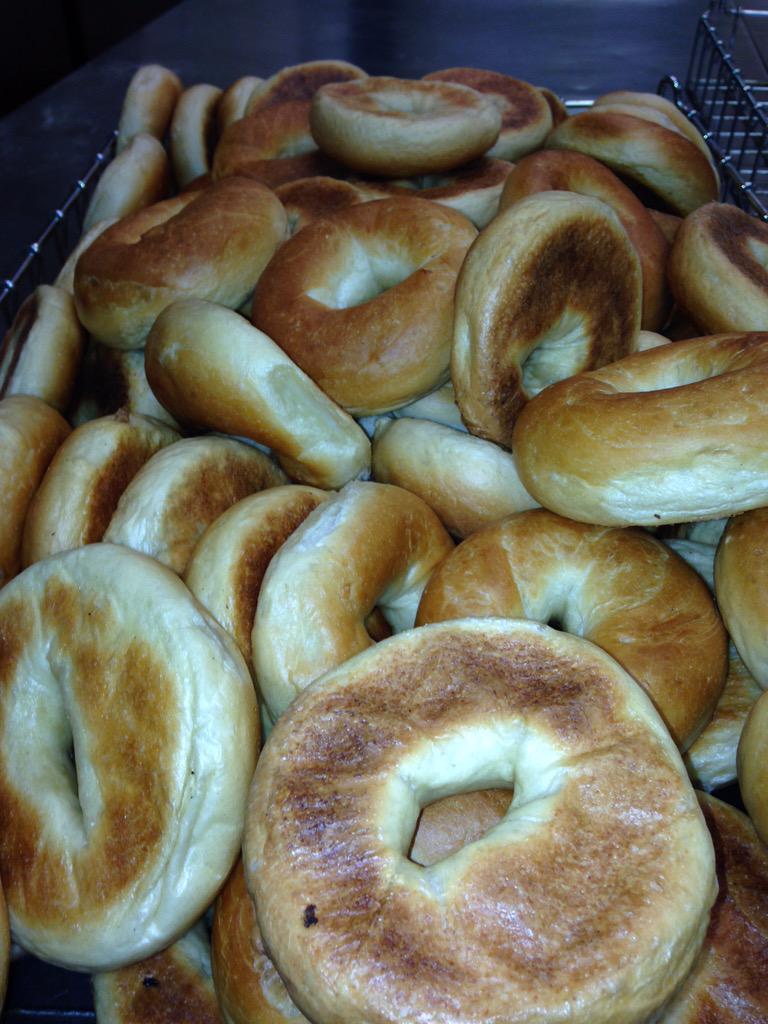 Brackman’s Bakery
This place has been a firm favourite in the Broughton Park area of Salford for more than 80 years, the longest established Kosher bakery in the city. They offer a range of freshly baked bagels, as well as deli sandwiches such as the classic Smoked Salmon and Cream Cheese. They also offer a Sunday Special where you can get 6 bagels, smoked salmon, egg mayo, tuna mayo and cream cheese for £10. 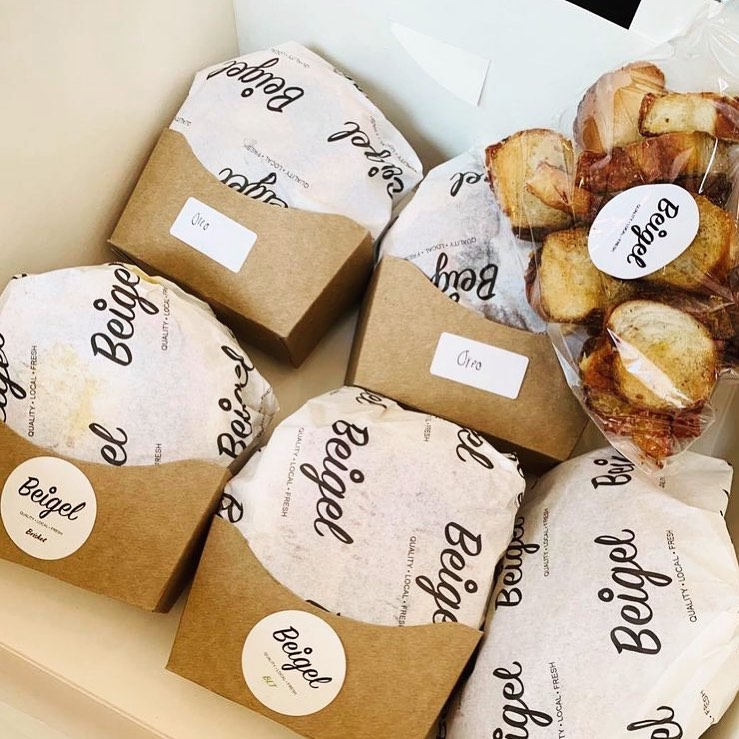 Beigel
An idea launched in lockdown, Beigel have been delivering and popping up regularly ever since, with a core menu of stuffed bagel sandwiches, including a banging beef brisket, plus a couple of specials each week. There’s also a ‘Beigel Bundle’ which comes with everything you’d need for a feast for two – and it can all be delivered straight to your front door with the minimum of fuss.

The Hottest Independent Manchester Homeware Brands to Brighten Up Your Home