One Deck Wednesday September Special with Miranda Sawyer at Electrik

Each and every Wednesday at Electrik of Chorlton you can find some of the finest record collectors and crate diggers, who are invited down to play whatever they want in entirety with no mixing, headphones, scratching or beat juggling, it’s strictly just about the music.

Journalist and arts presenter, Miranda Sawyer began her career at Smash Hits, won a PPA award for her work at Select magazine, and helped define the 90s through her work on The Face, Time Out and The Observer.

Miranda also wrote ground-breaking articles on Happy Mondays, Jarvis Cocker, Tracey Emin, Madonna and many more. A respected TV commentator and host, she has interviewed Tinie Tempah, Lady Gaga, David Lynch, PJ Harvey and others on screen; she hosted a Rose d’Or-nominated documentary on Björk for BBC Radio 6 Music and is currently making an interview series for the channel on film actors and directors and their relationship with music.

Miranda’s long experience in the music industry means she not only has vast knowledge of music from the 1980s on, but she stays abreast of current trends: this year she bagged the first full broadsheet interview with Stormzy for Gang Signs and Prayers.

Her integration into the art world has led her to collaborate musically on panels with artists like Jeremy Dellar, and to DJ at opening parties for contemporary artists such as Ryan Gander. She has curated stages at the The Secret Garden Party festival, and hosted at Port Eliot Festival.

Musically, Miranda’s taste extends through indie-noise, classic pop, hands-in-the-air house, old school hip-hop and contemporary grime. A genuine music enthusiast, she dances her way through her sets and loves nothing more than getting everyone else to join her.

So head on down, it’s FREE, and you can enjoy a fine selection of ales, craft beers, ciders and wine, as well as chow down on a brilliant Yadda Yadda kebab while Miranda works her magic. 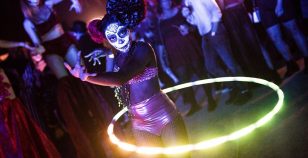 Festival of The Dead comes to Manchester this Halloween