What’s more impossible than trying to convince a cynic that you can read their mind?

How about where a mind reader convinces a cynic that they’ve read their mind… but you can’t talk about it?

Let me set the scene. Meet Luke Jermay, professional reader of minds, purveyor of future telling and just damn well good at shocking an audience. He himself is an eccentric and engaging character that truly had us all eating out of the palm of his hand (not literally).

At points in the show, all he had to do was be near one of us and he could tell us our past, present and future, which everyone in the room found entirely fascinating. He even revealed things about me that I knew no one could have known, even if they’d have done some extensive research on Social Media, as some tend to mention from time-to-time.

Luke told us that we were the quietest audience he’d ever had. Partly because there was only 20 of us in the small (but amazing) Impossible Theatre, but I think mostly due to the fact we were all in awe of what he could do. Every single person in the room at some point in the show had something personal revealed about them or a burning question in the future answered. That alone makes for a fantastic evening.

The smaller, intricate details of the show made it all the more exciting. Upon arrival, we were given our ‘drinks token’ that was in fact a tarot card and asked to draw something on a piece of paper but not show anyone – a terrifying prospect for someone who struggles to even draw a stick man.

I can’t say that I’ve ever had a tarot card reading, but I do know that you’re traditionally supposed to have around 20 cards that are all put together to give you a reading.

One card might perhaps not give you much, but the person we were seated next to at our table proceeded to tell me and my plus one what ours meant. Mine apparently symbolised fortune (laughable really as I am a pauper), but the person with me had the most terrifying looking card that I was convinced must have been death – it didn’t, it meant that they were feeling ‘bound’ or ‘stuck’.

If I can in fact reveal anything about Luke’s performance it is that you will walk away feeling inspired, even if you don’t have it in you to believe that he is truly seeing images from your mind transported to his own. I would thoroughly recommend attending the next ‘Audience with Luke Jermay’ to be wowed, even if you’re a non-believer.

It’s all part of the show of course, so that other cynics or people that in fact believe in the magic can enjoy it all for themselves without having anything ruined for them.

An Audience with Luke Jermay will next be at Impossible on Monday 1st October. Tickets are sold out though. His next performance will be Monday 5th November. Get your tickets below; 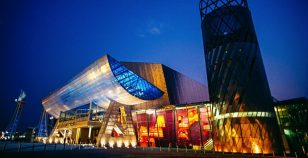