From Manchester to Paris: La Marais, Saint Martin and Montmartre

Even if scaling the Eiffel Tower or eyeballing Mona Lisa were ticked off your travel bucket list years ago, you’re still not done with this city yet.

Far from it in fact, there are many lifetimes worth of Paris to explore, so join us for Le Weekend north of the river, exploring three suburbs that have more than enough to keep you occupied without ever crossing the Seine. 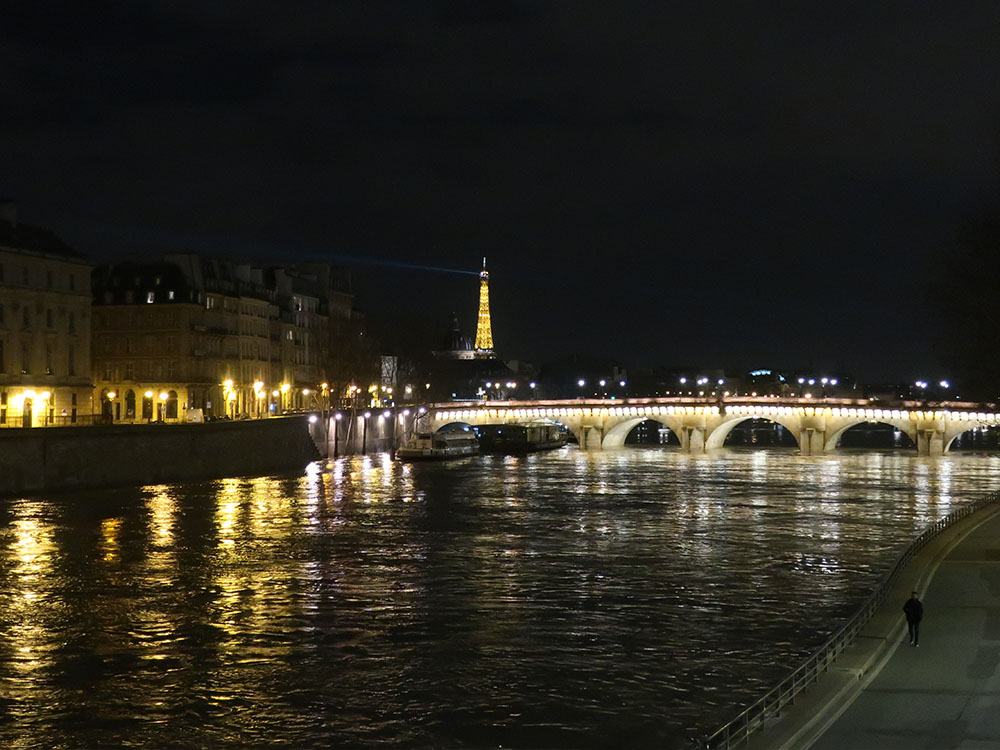 Before the revolution, Le Marais was home to much of the country’s aristocracy and this legacy can be seen today in the assortment of stunning mansions dotted around the area. Many have been converted into art galleries, like the Pablo Picasso Museum or fascinating Museum of Hunting and Nature. 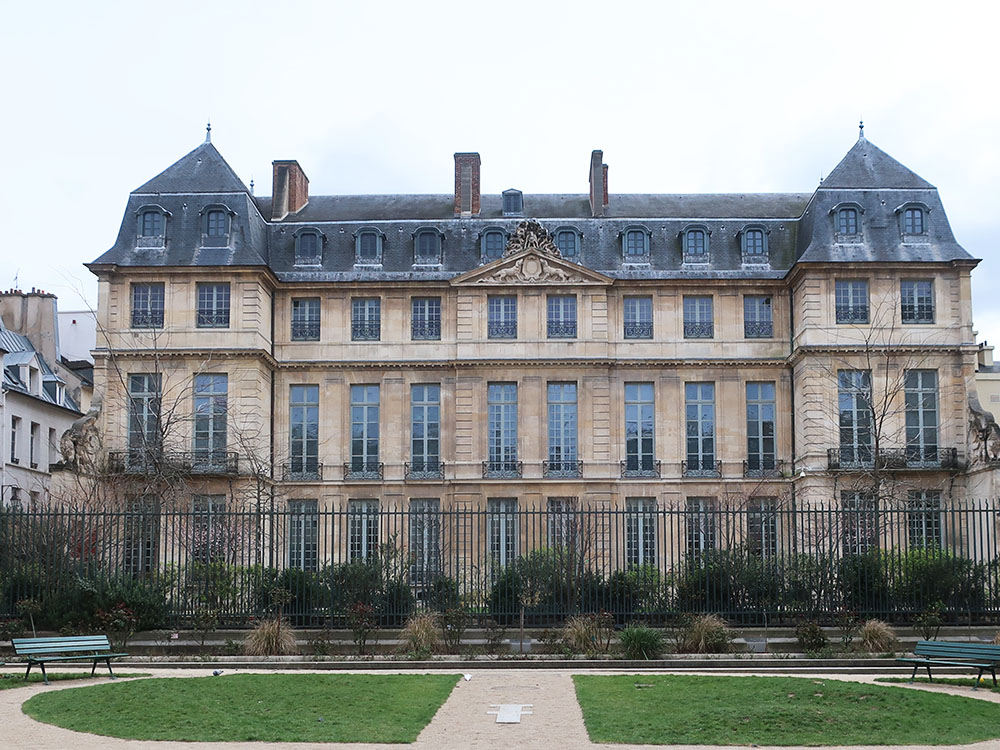 Atelier de Lumieres is another excellent re-purposing of architectural stock, housed in an old factory, the digital art centre offers surely the most accessible and immersive way to experience great French artists’ works. The paintings of pioneers like Monet, Renoit, and Matisse are projected onto the giant walls of the building and soundtracked with a diverse selection of music ranging from classical through to up front modern electronics. 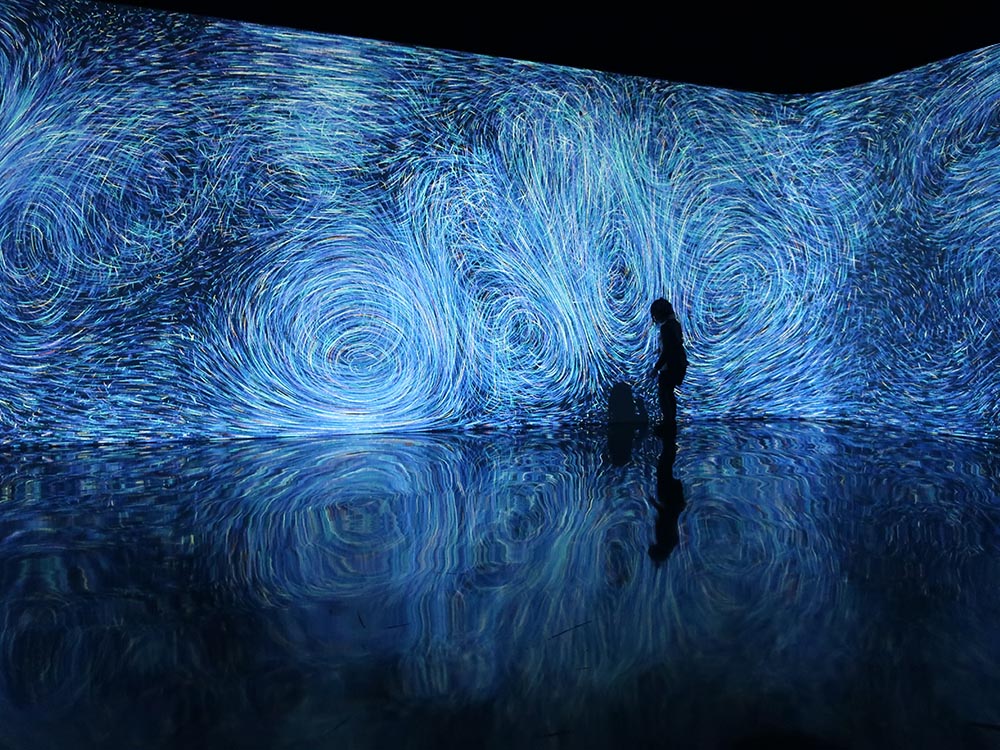 A district with strong Jewish roots, Le Marais has traditionally been a haven for immigrants from across the world and in more modern times LGBTQ+ friendly spaces. This diversity is represented in the gastronomic scene also, and you can discover more about both the history and modern representation with a Devour Food Tour.

Highlights include a visit to Sacha Finkelsztajn, a deli specialising in Yiddish produce since 1946 and proudly serving a community terrorised by Nazi occupation during the World War II. Marche Enfants Rouge is another must-see stop for both the inquisitive and hungry amongst us. Sample socca, an addictively delicious chickpea flatbread, borrowed from the streets of Nice and served steaming hot, sprinkled with sea salt in super-sized portions at the cult food stand Chez Allan Miam Miam. 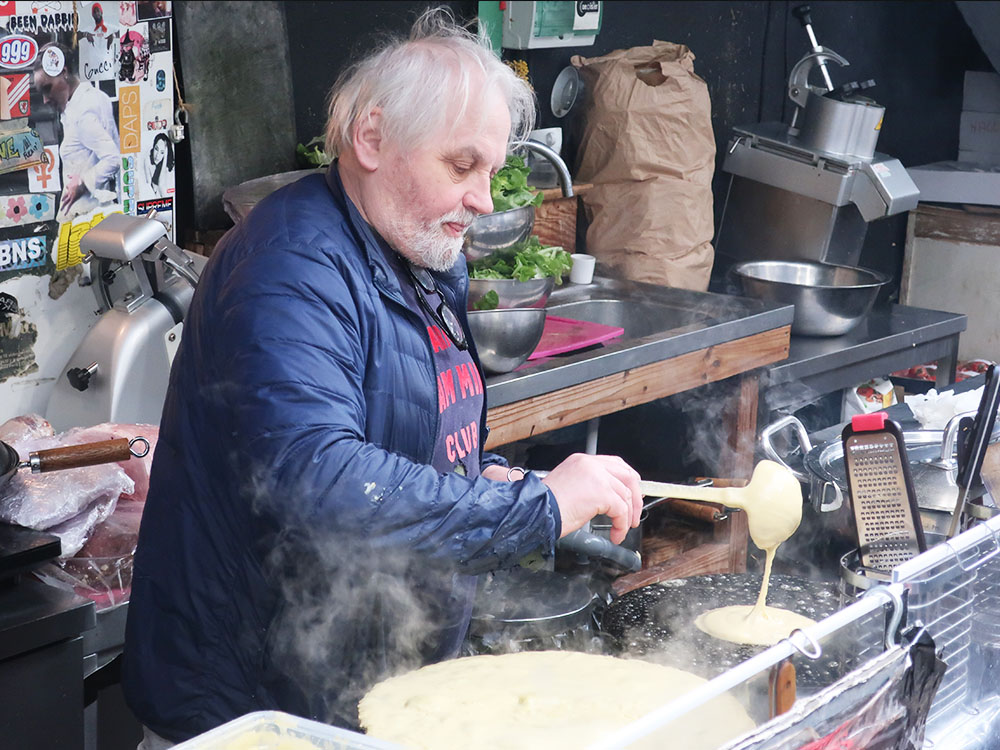 French food, sometimes quite rightfully, has a reputation for being conservative and protective of its art but it’s intriguing to see some of the most on-trend themes playing out in the world’s most forward thinking restaurants have been part of the culture here for many years. Take the menu at Les Philosophes, which features classic dishes like onion soup but uses only organic ingredients and creates each week’s menu based on achieving zero food waste. 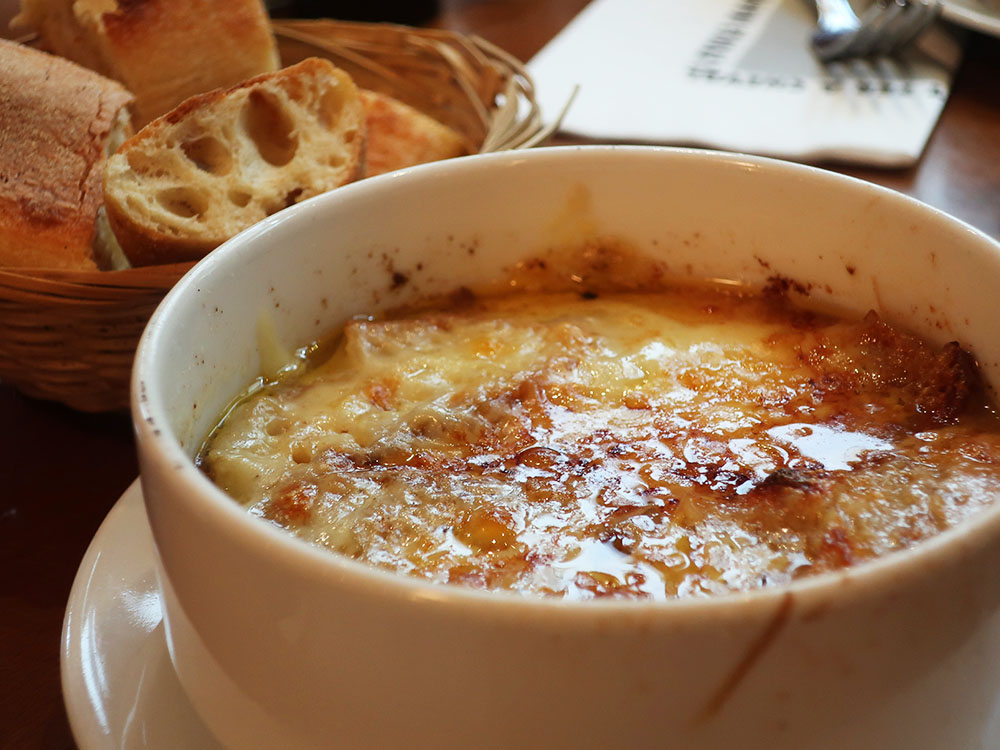 Chef and proprietor Xavier Denamur is a passionate advocate about reducing the impact of his restaurants on the environment as well as providing healthy food at realistic prices and we’re lucky enough to see him pop in during lunch service. He doesn’t miss the opportunity to offer a few choice words about the damage that fast food does to a person’s constitution. The French hating McDonalds? I guess some things will never change. 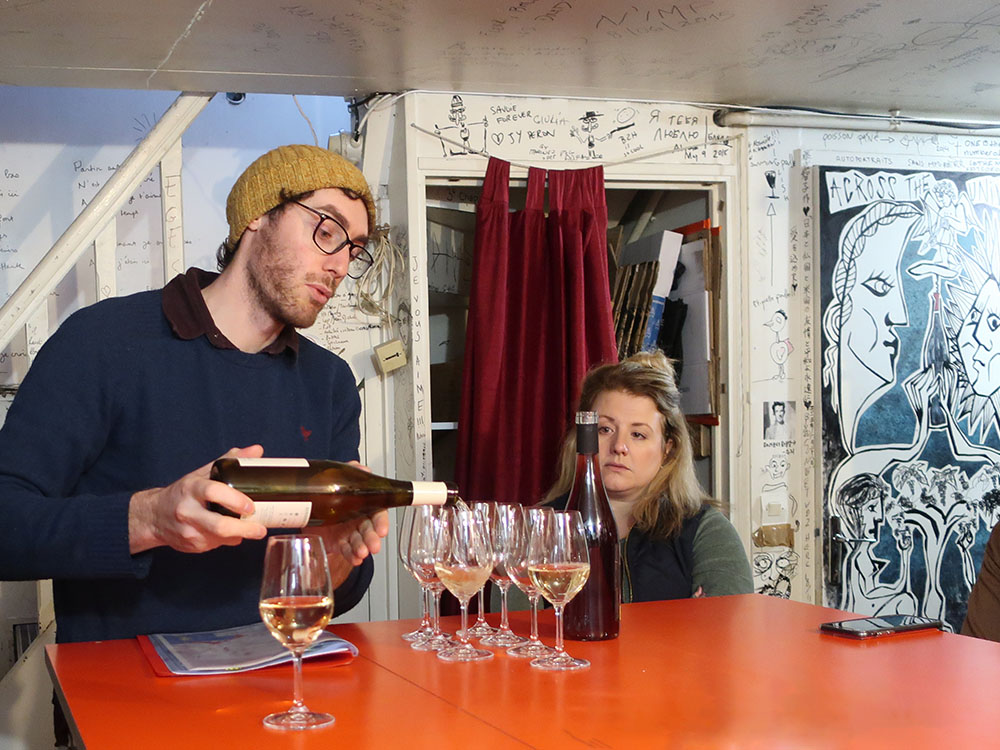 Natural wines are all the rage right now within the most discerning booze holes, so it’s fitting that we end our tour in the basement of L’Etiquette, a wine shop selling only the good stuff- organic, biodynamic and with no added sulphites.

Apparently sticking to plonk made by these production methods you can avoid a sore head the next day, I’m not entirely convinced, but can confirm a few glasses at lunch definitely took the edge off that morning’s hangover.

The charming banks of Canal Saint Martin have become a hotspot for natives to congregate, perching on the water’s edge or taking a seat at one the many pavement bars.

Pick your pew from the mismatched vintage furniture of Le Comptoir General or rock up to Point Ephemere for drinks and live music. Failing that if the sun’s shining just grab a bottle of something nice and find a spot anywhere you can. 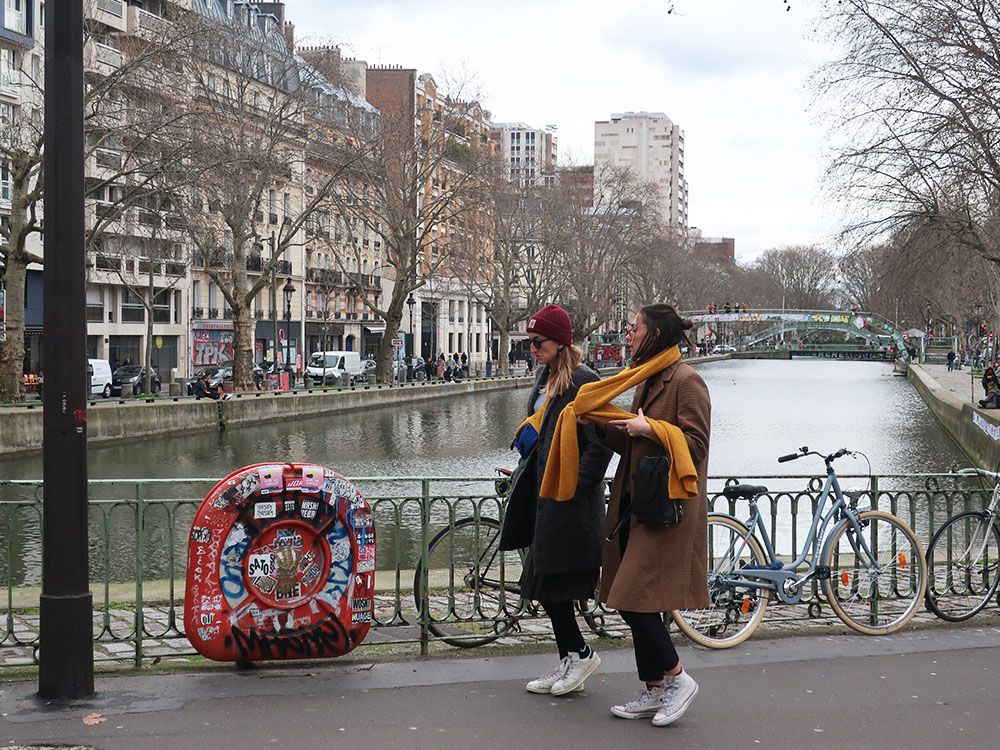 Strategically positioned for exploring the other northerly arrondissements, Saint Martin makes a great place to base yourself. Stay at the Le Grand Quartier, a stunning new design-led hotel that squares contemporary stylish spaces with welcome homely comforts.

A well-appointed bar, excellent restaurant, terrace garden and rooftop give you a more than enough reasons to hang around the hotel a little longer than planned. Late risers take note too, breakfast is served until four in the afternoon, which is probably enough reason alone to try and move in for good if you ask me. 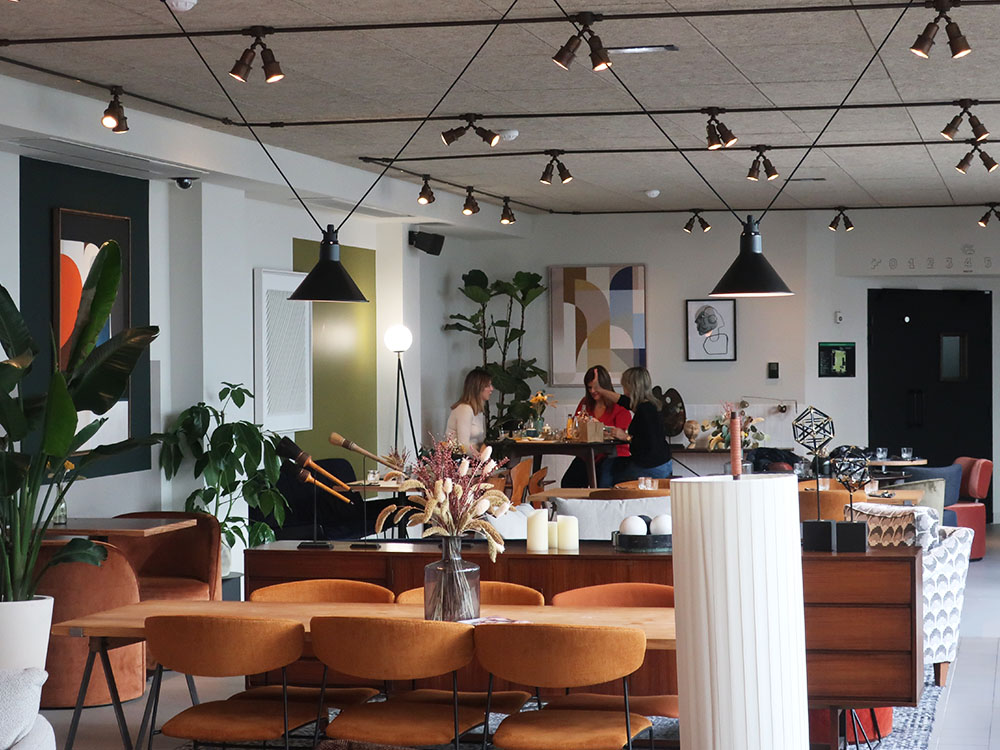 The less-frequented neighbouring hood of Belleville is a must for lovers of street art. Wandering the tight alleys adorned by both French and international artists is a great way to get off the beaten track in a city that throngs with tourists throughout the year.

Scale the hill up to Parc de Belleville to see more tags and pieces, plus one of the best vantage points for a view of the Paris skyline. It might not be quite as dramatic as the view from the Sacre Couer, but you may just have the place to yourself rather than sharing with thousands of people and, if you get more luck than me with the weather, it’s the perfect angle from which to glimpse the Eiffel Tower. 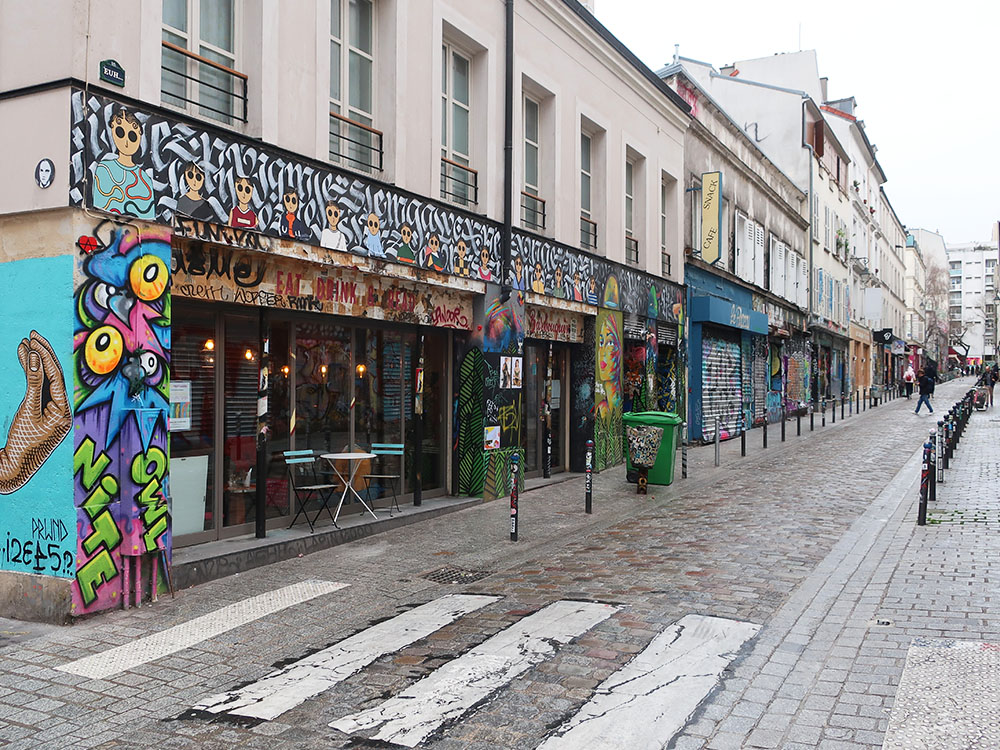 If you’re searching for that romantic image of Paris from your daydreams, or just want to recreate your favourite scene from Amelie, then Montmartre is the neighbourhood to get lost in.

The streets breath history, famous residents have included Picasso, Van Gogh and Dali, and after dark the world-famous Moulin Rouge has been titillating rambunctious punters since sometime in the late 19th Century. 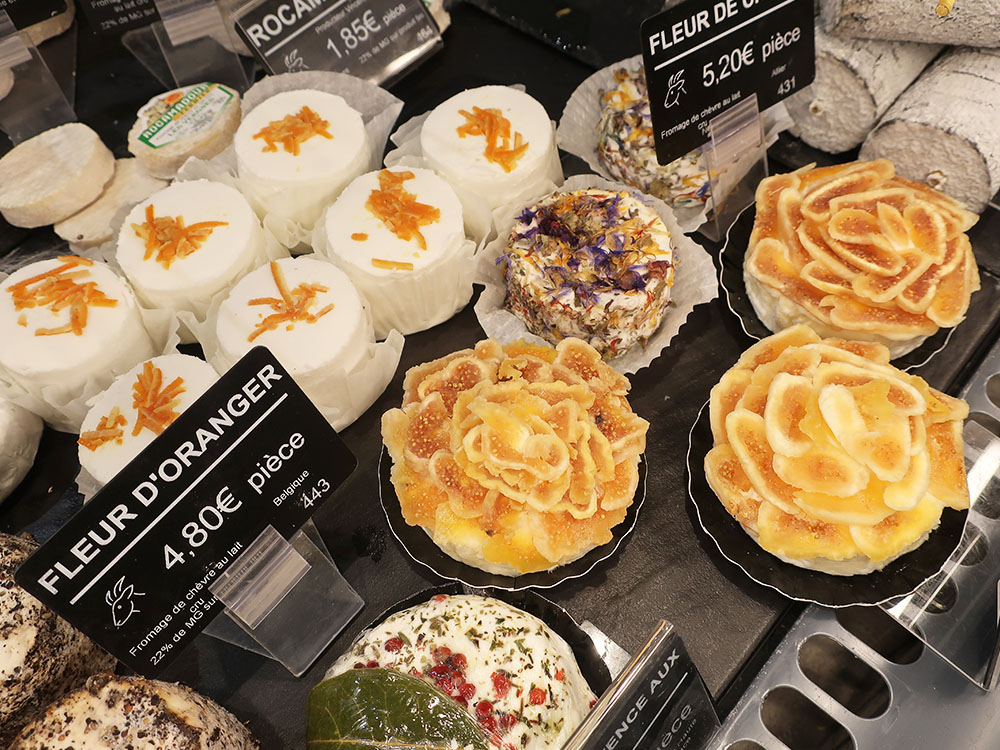 The culture-rich area is also filled with some the of city’s best boulangeries (over 180 in fact!), patisseries and bars. It’s the ideal place to pick up some produce for a picnic or relaxed evening meal. Join Secret Food Tours Paris for a guided walk around some of the best cheese, meat and sweet treat boutiques before heading back to a cosy location to enjoy your bounty. 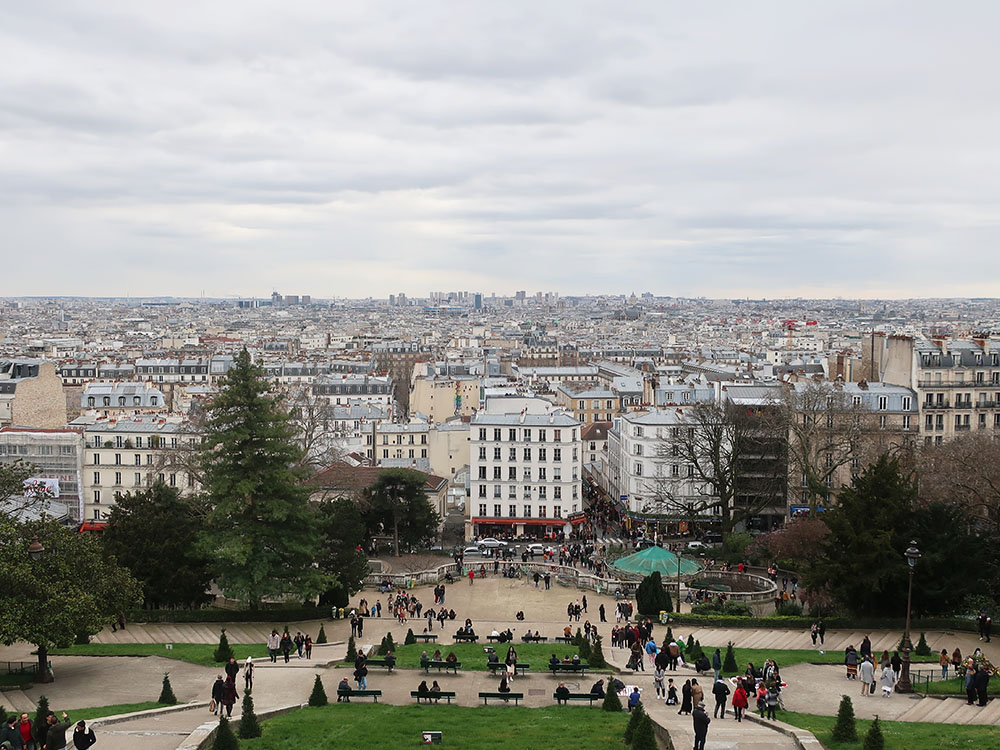 It’s one of those places that’s touristy for good reason. Whether you’re interested in the Sacre Couer Basillica for religious reasons or not, a hike up the hill and a battle with the crowds and hawkers is every bit worth the incredible views you can find atop. A horizon so rare amongst other cities of similar influence for its lack of skyscrapers, the disorderly arrangement of rooftops feels like it’s evolved organically and almost seems alive. This could just be the perfect way to end a weekend in Paris, a truly unique city with so much life to explore.