The sides have it, at Edinburgh Castle

We might be sat in an immaculately turned out room with seductive low light and highly groomed food - but this is still dinner above a pub, and Edinburgh Castle don't want you to forget that.

Back before small plates were invented we had something called sides. Granted they were usually chips, mash or peas – but you might have shared them with your companions if they asked nicely enough.

These days with ten-course tasters (where you spend more time hearing about your food than actually eating it) and ‘it comes out when it’s ready’ dining experiences (where everything seems to arrive at the most inopportune moment possible) you can forgive me for craving an evening of starter, main and dessert (perhaps with a few sides), and that’s exactly what we had in store at Edinburgh Castle.

“Being above a pub, we felt it wouldn’t be right serving food in a pretentious way. We wanted to create a three-course menu that would be familiar to people and bring them back to try things again and again“

Chef Julian Pizer told us as after we’d tucked in.

That’s not to say standards aren’t high but that’s just the point, this food is most certainly doing the talking, and absolutely everything on the menu wants to get a word in.

“My chefs are asking me why they’re spending hours macerating mushrooms for a side dish, but we want to create everything from scratch with zero-waste.“

Everyone’s been talking about THAT Hasselback potato but clearly attention to detail is paying off across the board, and as the evening progresses we’re left cooing about all the nice surprises that arrive alongside the main event.

Before all that, a couple of classic looseners and a few snacks. Brandy, champagne, citrus and the nectarous hint of honey make up an elegant French 75, it’s stiff rather than subtle though and I’m sold.

The more familiar sunset glow of a Small Island Negroni also does its appetite-inducing magic. Bread and butter then crisp potato rings, crunchy as crackling, and a lovely nibble of halibut ceviche arrive at the ideal time.

Even amongst this menu of dishes that arrive not en masse but in adult-sized portions, there’s still plenty of room for showing off. Hiding amongst a broth of parmesan and pickled walnut foam, veal sweetbreads, slowly revealing themselves as the gently fizzing elixir subsides. Theatrics aside, I’m more interested in how devastatingly delicious it is.

A tender stripe of pickled ox tongue served obscured by sauce gribiche, the traditional French concoction of egg white and pickled things is also worth the punt. When cooking is this good it pays to put full faith in the kitchen and order stuff that sounds interesting rather than playing it safe.

And similarly, a little chat with waiting staff won’t go amiss, our waiter lets slip about a cracking little bao bun which comes alongside the smoked pork jowl with steamed mussels. It’s nice to see so much effort going into the extras, and even the clandestine ones at that.

The Hasselback potato is more widely known, and already a big favourite down at Finest HQ. Meticulously scored, roasted crisp and served sat in the fermented tang of buttermilk, it’s the best reason we’ve ever found to spend a fiver on a spud.

Shaved swede with thyme roasted blueberries is another example of the circularity of the menu, as wagyu fat from our beef is used to bring it all together.

And about that beef… aged in beeswax and served beautifully rare alongside various forms of onion in an oxtail broth. This is the sort of dish that food envy was invented for, avoid ordering it at your peril, you’ll only end up staring it at across the table otherwise.

Hidden under a shard of barley malt meringue you find a splash of Lemon posset and a rabble of spicy ginger rubble and on the side a sort of ginger granita. Let’s say shaved ice that feels a slug or two of rum away from the ideal company for an afternoon spent on the beach.

Finally, the classic Baked chocolate topped with fast-dissolving jersey cream needs to be eaten fast, which is, of course, no burden. It’s steamy, sticky-centred stuff that’ll leave a big chocolatey smirk on your mug.

It probably goes without saying there’s some genuinely exciting stuff coming out of the Edinburgh Castle kitchen right now, exciting and indeed quite heavenly. Separating yourself from the rest is hard though, and it’s often the little things you remember.

So here’s to those unsung, best-supporting sides, making all the difference. 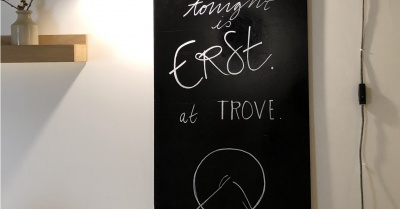 Our First Taste of Erst 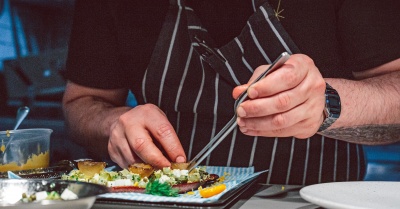