Hatch: The shopping and dining pop-up coming to Manchester

As Shoreditch trendies will already know, the latest answer to our all our uber cool shopping and dining needs is a complex made from repurposed shipping containers under a bridge on Oxford Road.

Hatch, an exciting new retail and leisure pop up space, is coming soon to the area under the Mancunian Way . You know the place, the one under that bridge littered with rubbish and lined with vomit. I know it’s hard to imagine now, but let’s just have a little imagination. Maybe it will have some adorable billy goat gruff vibes to it, we hear troll is the new cool.

Hatch will occupy the space under the city’s iconic flyover, offering a range of pop-up and semi-permanent retail fixtures designed to attract aspiring entrepreneurs and established traders looking to try something new.

It works in London, but I can’t help but think that its placement under a motorway is questionable enough, never mind filling shipping containers full of nano-breweries, espresso bars and artisan food vendors in the centre of a student area. Students are intrinsically poor, and won’t be willing to spend bare cash on a pint of craft ale and a crab sandwich. Although, on the other side of the coin, it could become a new centre of eating and drinking that lies somewhere between Town and Didsbury. At least, I think that’s the idea.

Don’t get me wrong, I think it sounds like an awesome idea as I am a great fan of pop-ups and casual dining, but the other thing that plays on my mind when thinking about Hatch is the weather. I’ve been to Box Park in Shoreditch and had a few drinks and some street food under the blazing August sunshine, and the problem I’m sensing is that the weather up north is categorically shite. Open air isn’t really an option north of the Watford ga,p except for the three days a year the sun comes out. I love the idea, but I don’t fancy 30 Mancunians and myself crammed into a shipping container to shelter from the rain.

On the bright side, the recycled shipping containers are an eco-friendly answer to urban development that can be moved around and taken away easily. Hatch also plans to support the student community, providing a space where they can sell their work.

Plans for Hatch have just been approved by the council, and although it is a pop-up, it will be sticking around for five to ten years. Hopefully, it will change the way we look at Oxford Road and transform the University corridor into a stylish hub of art, food and culture for all to enjoy. Expect to see it under the bridge Spring/Summer 2018.

OCTONAUTS TO THE RESCUE! 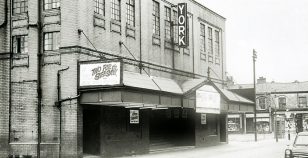 The Aaben: gone but not forgotten