I'm no stranger to a bit of a grilling. In fact, cooking food at ill-advisedly high temperatures comes second nature. If setting off fire alarms making breakfast was the aim of the game, I've nailed it more times than most. Putting me in charge of a barbecue within a building then, is a recipe written for the most fumes seen inside since the smoking ban.

The lure of grilling indoors was too tempting to avoid though. Don’t get me wrong when it comes to barbecues I’m not one to let a little incremental weather get in the way, a few straw snow flakes never hurt anyone, but year round cookouts without the frostbite and damp, soggy baps sound right up my street. If you’re of the same state of mind then Annyeong could well be your answer. The Korean barbecue restaurant has been open just a few months and has already established itself as the place to be for meat cooked à la table.

There was the small matter of small plates to sample before we got the flames fired up though, and surely no better place to start than the kimchi set. The Korean staple is probably the country’s most famous export, well after Gangham Style anyway. Fermented vegetables might not sound like a tempter, but the slightly spicy, acidicly addictive flavours are not to be missed.

Most countries seem to have their own take on a dumpling, but the ones from the Asian continent are arguably the best. These pan fried beef dumplings were similar to Japanese gyoza in construction, nicely crisped and filled with gently spiced meat. A piquant, sesame seed dip was ideal to bring out their best.

That same dip also brought the Kim chi chun (kimchi pancakes) to life and in to their own. The golden fritters felt like the perfect hangover food, indulgently rich and with the most comforting chew.

Up next a bowl of kan pung ki, a Korean take on fried chicken, also impressed. Sticky, spicy, sweet and sour sauce with crunchy little battered balls made for a seriously moreish dish.

Perhaps the most interesting starter came in the form of yuk whea, a take on tartare, with slices of raw beef in a sweet dressing topped with an egg yolk, accompanied by cucumber and pear slices.

For the main event we chose the bbq platter, two pieces of slate that arrive proudly adorned with a pretty serious amount of meat. If you’re taking this on between two you’ll need appropriate appetites, we were more than ready. The cuts on offer include first pork belly, beef tongue, marbled beef and then spicy marinated pork, chicken and beef packed with umami kick. It’s a delicious selection with a bit of something for everyone- whether it’s fatty, lean, spicy or salty you’re covered.

Sides are conveniently dainty, pajori is a sesame seed spiked salad of spring onion which adds a nice bite of fragrant crunch.

The traditional way to transport your grilled goods from plate to mouth is via a lettuce leaf or two. It’s a total masterstroke if you’re looking to max out on meat, why waste space with bread? I’m definitely adopting this little idea for my next barbecue, I’m not sure how impressed everyone will be with their lettuce leaf burger at first but they’ll thank me afterwards.

Maybe Annyeong isn’t one for a first date, at least not if you’re rocking my grill skills, we emerged from the place a little smoked out. File this number under the place to live out those carnal carnivorous tendencies, with plenty of fantastic Korean delicacies on the side too. 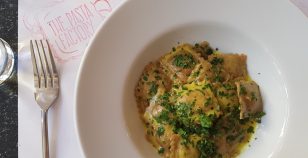