Over a fortnight has passed since ringing in the New Year and, just as we’re beginning shake off our some of our more stringent New Year’s resolutions, so it conveniently happens: club night listings have picked up! (It’s as if they knew our resolve was starting to weaken).

If you’re starting to feel more inclined towards the concept of Ginuary than Dry January, and perhaps fancy shaking a leg along the way, then you’re in the right place. We’ve gone through the slimmer-than-usual pickings and picked out our highlights for your perusal.

Jane Fitz x Gwenan @ Soup Kitchen
Friday 19th January
Soup Kitchen host a proper trance session in their basement this weekend with Freerotation and Pickle Factory residents Jane Fitz and Gwenan. Get ready to get stuck in, these ladies know their stuff. If you’re into trance, this looks set to be a good’un.

The Wasted Kollective 1st Birthday w/ Hatcha, Youngsta, J:Kenzo and more @ Rebellion
Friday 19th January
January, rather quiet by Manchester’s usual standards, has turned out to be a surprisingly good month for our city’s dubstep fans. The Wasted Kollective bring dubstep icons Hatcha, Youngsta and J:Kenzo to Deansgate locale Rebellion as they celebrate their first birthday. Whilst attending requires you brave the Locks on a Friday night, we’d still say it’s worth it to see these three play out.

Swing Ting 1st Dance of 2018 feat Jus Now (DJ set) @ Soup Kitchen
Saturday 20th January
The ever-evolving label collective that is Swing Ting throw their first dance of the year in Soup Kitchen’s basement this weekend. A long-standing favourite for a reason, head down for their usual mix of bass-heavy riddims and a special set from headline duo Jus Now. who’ll be bringing the heat with a blend of vibrant Trinidadian Soca rhythms and sub heavy, underground tones.

Dub Phizix and Strategy @ Antwerp Mansion
Thursday 25th January
Worried about Henry have been promoting at the Mansion for a minute now: bringing some decent bass music line-ups to the dilapidated Rusholme party house. This month they’ve locked in local bass heavyweights Dub Phizix and Strategy for a night of wall-to-wall D&B, half-time, jungle and dub. Whilst once upon a time you could’ve caught these two at Antwerp on the regs, times have changed so don’t be sleeping on tickets.

Ossia 2nd Birthday with Leon Vynehall and Sassy J @ Hidden
Friday 26th January
Manchester-based promotion team Ossia bring in two of their all-time favourite selectors, Leon Vynehall and Sassy J, to lay down some extended birthday grooves at their birthday party at Hidden this month. Consciously steering away from mainstream producer-led line-ups and opting to book selectors for long sets, Ossia always cultivate a unique vibe at their events

Off Beat Presents: Mala and Sinai Soundsystem @ Gorilla
Friday 26th January
A true pioneer, Mala has remained a leading figure in the dubstep scene for over a decade now. As one of the genre’s originators he’s well respected, both as an artist and as head of the trailblazing label Deep Medi. A mighty selector with an arsenal of dubplates, get ready for some serious bass weight as he plays out through Sinai Soundsystem’s weighty rig.

Meat Free w/ Ancient Methods + SΛRIN @ The White House
Friday 26th January
Last month Meat Free were nominated by DJ Mag for the ‘Best Club Event in the UK’. The all-female collective have been bringing their intoxicating combo of house, techno and glitter to Manchester’s dance-floors for five years now, and we’d say the nomination’s well deserved. This month they kick off another year in business with a special Aufnahme + Wiedergabe showcase at Salford’s The White Hotel, featuring sets from special guests Ancient Methods + SΛRIN. Also, it’s BYOB!!

Chow Down w/ Teki Latex 7th Birthday @ Soup Kitchen
Friday 26th January
Chow Down celebrate their seventh birthday with a party at Soup Kitchen, flying DJ Teki Latex in from Paris for his Manchester debut with a special 3 deck headline set.
If you happen to’ve caught one of his many appearances on Boiler Room and Overdrive Infinity, our work here is already done. If not, get ready for a big mix of genres: grime, uk garage, IDM, American club tracks. slow-burning techno and house grooves. Taking disparate elements and piecing it all back together into a melodic groove made for the moment, this looks set to be something really special.

Post yours and a friends name on the Facebook event wall for free entry (limited availability)
https://www.facebook.com/events/1577517762342341/

HomoElectric @ Hidden
Saturday 27th January
Long-time local party heroes HomoElectric throw their first of 2018 with a big focus on the Manchester scene. With a line-up showing off some of the DJs they love and feel represent our city right now, it’s a family affair and that’s no bad thing.
Sets come from Meat Free’s Blasha & Allatt, original Hacienda DJ Paulette, Gina Breeze, Will Tramp, Jamie Bull and Luke Unabomber.

One Deck Wednesday with Maxine Peak @ Electrik
Wednesday 31st January
Ok so this isn’t really a club night but after recently watching her in Black Mirror we felt suitably inclined to sneak it in. An absolute legend of the stage, screen and the North West in general, you know this is going to be a fun night. Expect a mixed bag of electronic, northern soul, punk, new wave, reggae and more. 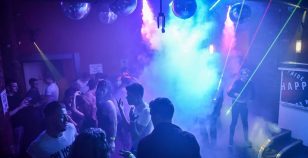 The 7 Best Places to go to for a #Throwback Song &…